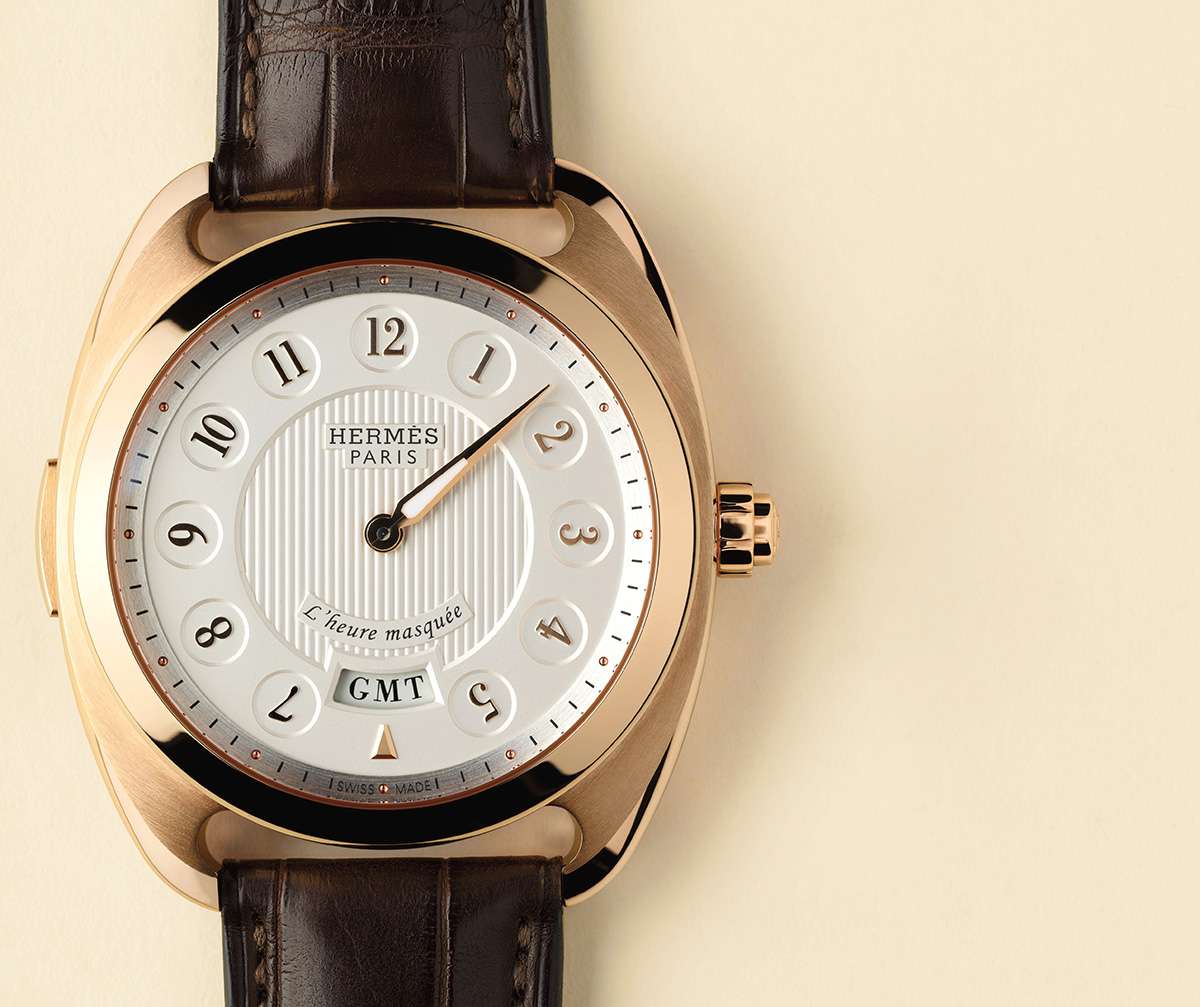 L’Heure Masquée by Hermès.
Hermès is a brand best known for its scarves and leather goods, but its watches are also superb, and a fine expression of the maison’s distinctively ironic touch, perhaps less easy to discern in its fashion products. Now an integrated watch manufacture – in other words, most of the operations required for making their watches are performed in-house – their designs are very original, and quite philosophical. The basic idea is that time is not always constant, at least in our human experience: some moments seem to be far longer than their chronographic measurement, while on other occasions, prolonged periods seem to pass in an instant. 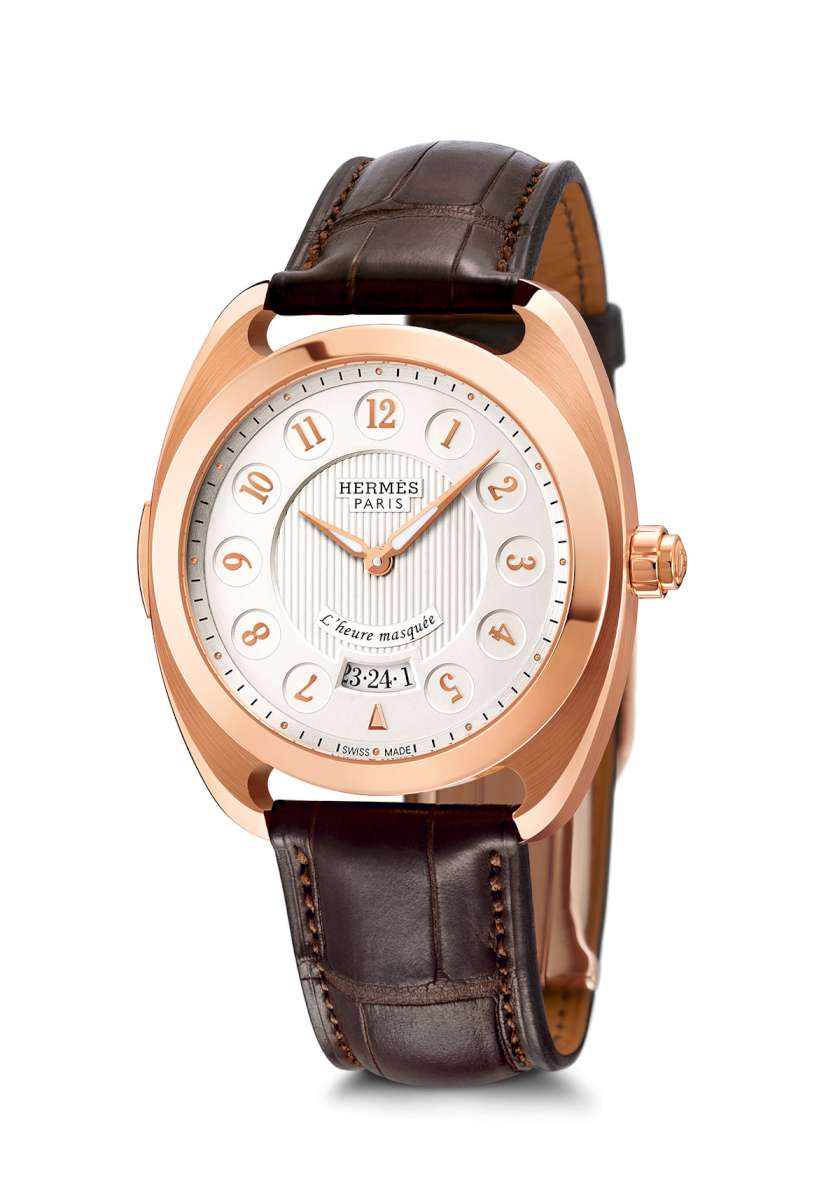 Hermès have already presented a number of models on this theme, and this year’s, L’Heure Masquée, launched at Baselworld in April 2014, is fun to observe and use. It seems to have just one hand, the minute hand, but when you press the button on the crown, the hour hand pops out from underneath, and revolves around the dial to reach the right hour. As long as you keep the button pressed, it remains a normal watch. When you release it, the hour hand returns to its hiding place under the minute hand, revolving with it hour by hour.

It’s nice using it, because you soon discover that a lighter pressure on the button slows the revolution of the hour hand, and so it becomes something of a game. The movement must have required a fair amount of development, because it could be described as a totally new complication. The inspiration for the Artistic Director of Hermès watches, Philippe Delhotal, came from the so-called regulator clocks, with just a minute hand, that were often seen in factories and watch-making workshops, allowing staff to check at least the minutes (because at work we can always be fairly sure when it’s getting towards lunchtime!). The movement was developed by Vaucher, a company co-owned by Hermès. 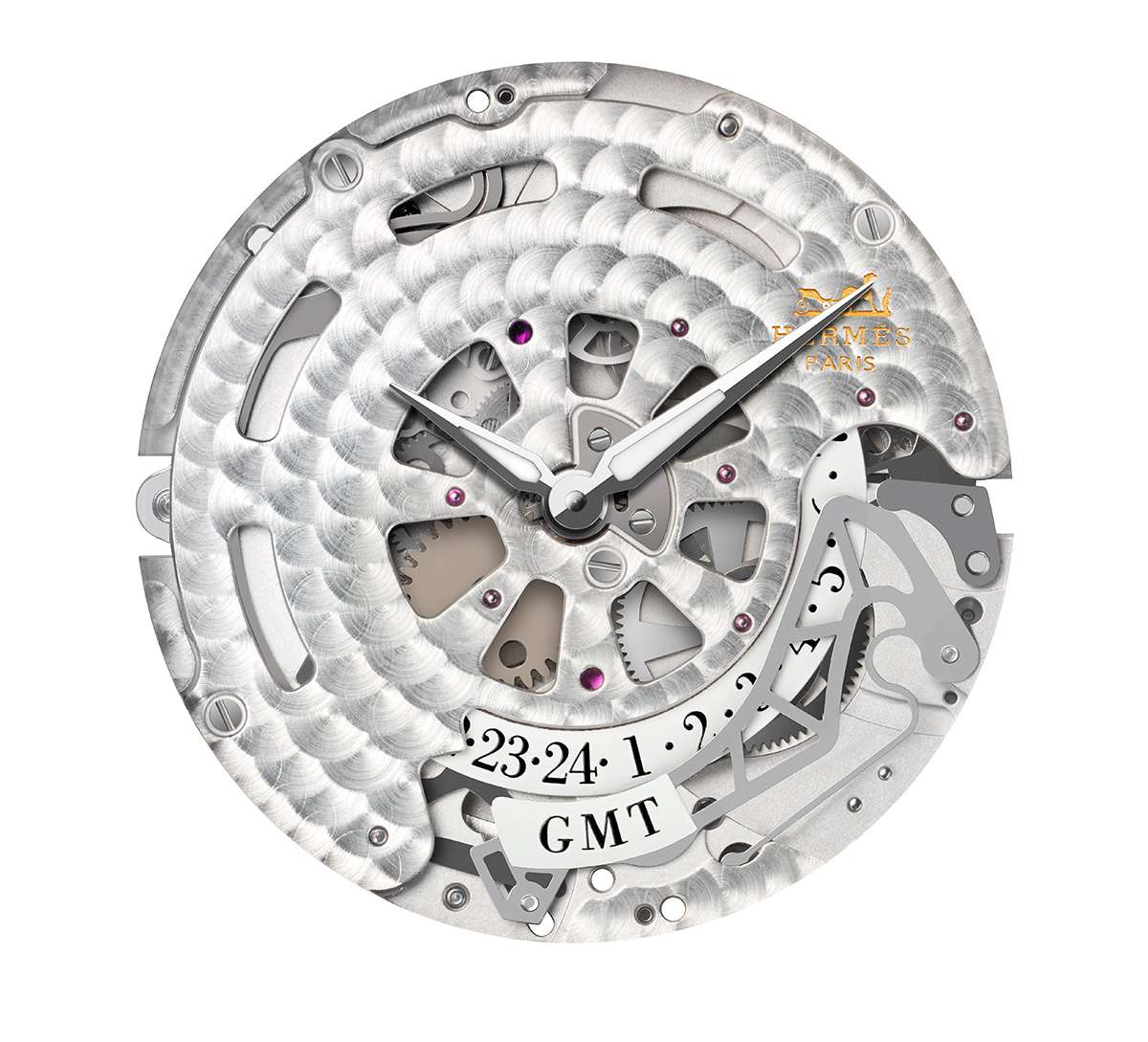 L’Heure Masquée by Hermès, dial side of the H1925 movement when the button in the crown is pressed, revealing the hour hand and the second time zone hour reading

The watch has a second function, a GMT timezone, so that you can see the hour in a different part of the world. The window at 6 o’clock is hidden by a screen with the letters “GMT” on it, but when you press the button on the crown, the screen slides away to reveal the digital hour reading. Both the local hour and the second time zone hour are revealed at the same time. The button at 9 o’clock changes the second time zone reading, hour by hour, but to watch it while you are adjusting it, you have to press the button in the crown as well to slide the screen away.

I personally would have preferred the watch without the GMT, it would have been purer irony, but it’s also a nice idea to combine a very playful function with one of the more useful watch functions, ideal for travellers and international businesspeople who would like to know the time at home so that they can phone without disturbing.

The design is lovely, combining the cushion-shaped bezel with a circular dial, that has a period touch in the circular depressions around each hour-number, like the dial of old telephones. The oscillating weight, with its machined decoration featuring a series of interlocking H’s, can be seen through the sapphire caseback. At about 38 by 40 millimetres, it’s a fairly small watch, and its thickness of 6.4 millimetres means that it’s also good as a dress watch, sliding easily under a shirt cuff. The way in which the alligator strap is fixed to the case is also a nice feature, a Hermès trademark recalling a stirrup and the brand’s long history in saddlery. 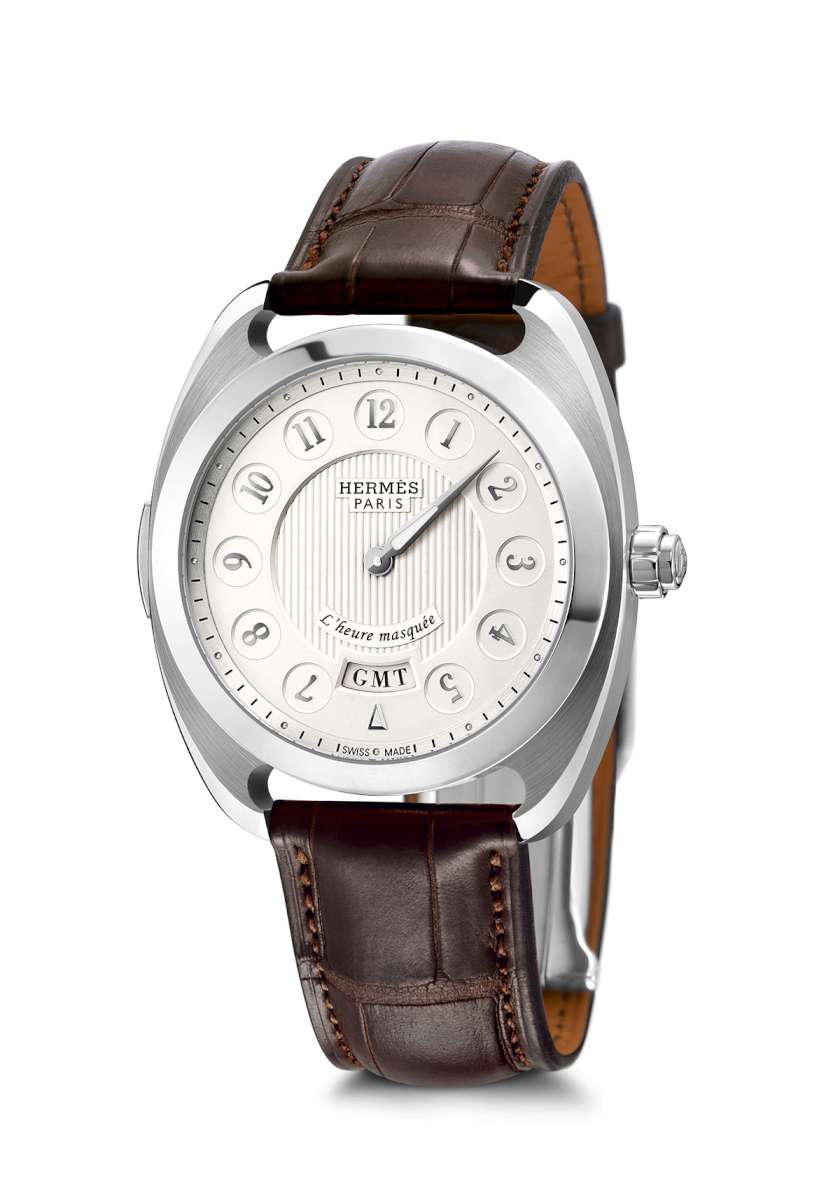 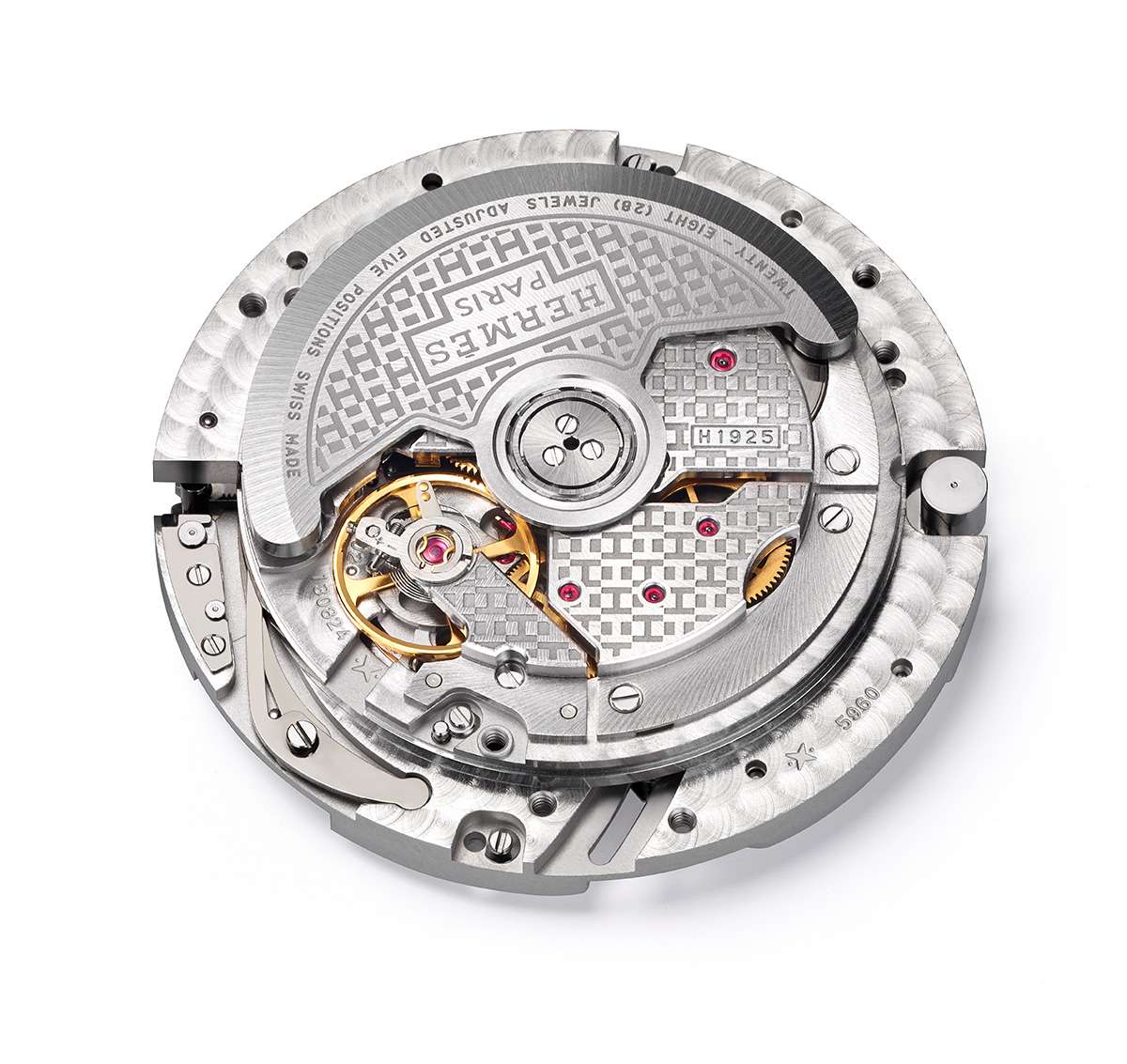 The H1925 movement, the oscillating weight with Hermès’ own decorative pattern 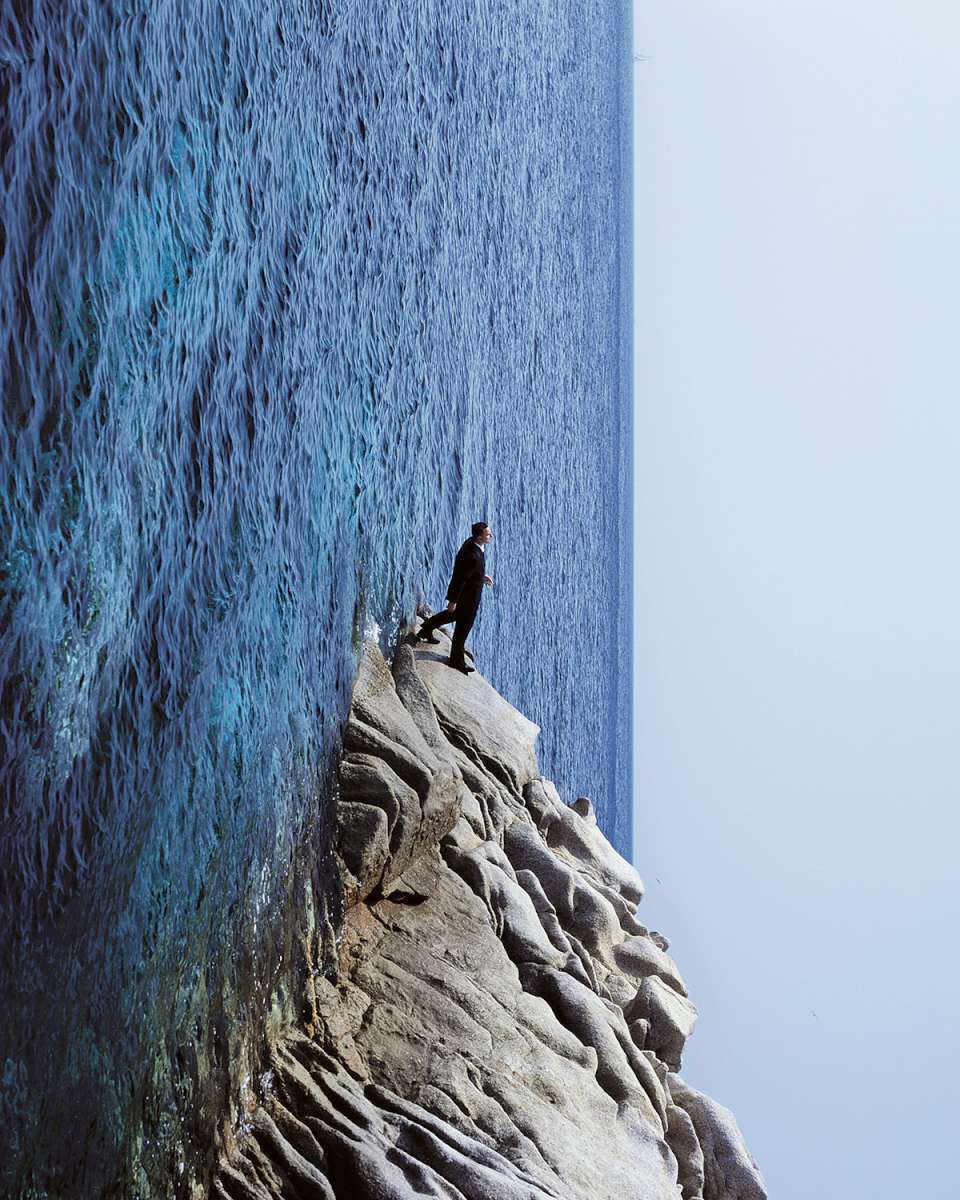