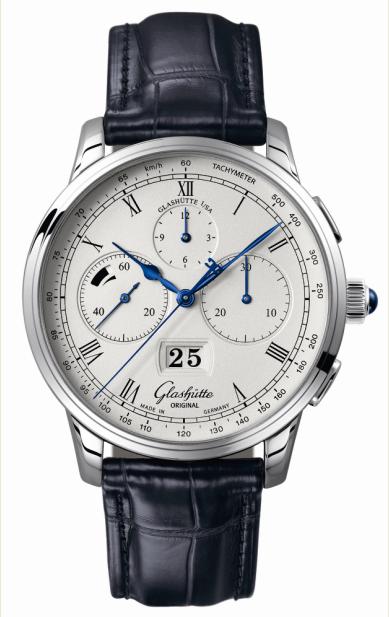 Glashütte is not just a watch, it’s the name of a town. And it’s a long story of resilience and survival, starting in 1845 when the local silver mines started to run out. Ferdinand Adolph Lange had visited Switzerland, where he had seen what the watch companies were doing there, and he responded to an appeal by the local government of Saxony, in Germany, in dire need of a new form of employment in Glashütte, near Dresden. This was the start of a thriving German watch industry, and by the early 1900s, Glashütte was so famous that watch brands in other countries started putting the name of the town on their dials. This was countered by genuine Glashütte brands who registered the phrase Original Glashütte.

The town of Glashütte survived the Second World War, until the very last day, when it was bombed by Russian aircraft. It became part of East Germany, and the new regime put the finishing touch on the story of destruction by crating up all the equipment that had survived in the local factories and sending it to Russia to begin a new watch industry there.

But they forgot to send away something important: the people. The watchmakers who remained in Glashütte decided to start from scratch, they began making new machinery, and laid the foundations for what is now a thriving watch industry. Today, Glashütte is a very small place in a valley cloaked in trees, not far from the Czech border, but it is home not just to Glashütte Original, but also to A. Lange & Söhne, Nomos and several other brands, along with a lovely watch museum that tells the story in much more detail. A story of survival, which has blossomed into a cheerful location where competing companies seem to get on well enough, united by the conviction that to be successful, they have to be as good as the Swiss. And I would say that they manage that pretty well. 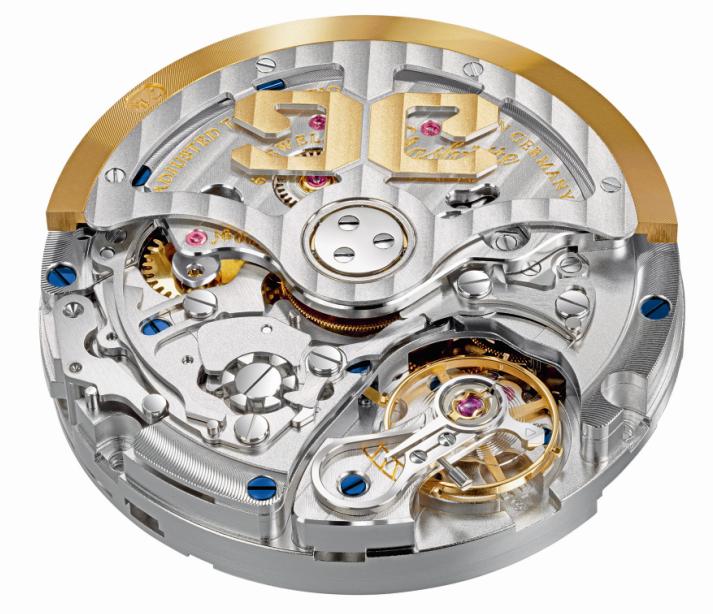 Glashütte Original is a true manufacture, in that it performs most operations involved in watchmaking – say 80% – itself, and the Senator Chronograph Panorama Date has an in-house movement, the new Calibre 37-01. This is a truly beautiful watch that reminds me of a grandfather clock I used to know, with its silvery dial finish, Roman numerals, and discreet, classical dial design. The model shown here has a platinum case, and a gold dial with black markings that is given its unique finish by a hand-crafting technique, “silver plating by friction,” dating back to the days of long-case clocks. A mixture of silver powder and various other substances is applied to the dial and then rubbed carefully, initiating a process that is part physical, part chemical, and yields a silvery finish, slightly different from piece to piece. The combination of the platinum case and bezel, the unique dial finish, and the blue sapphire cabochon on the crown, is extraordinarily beautiful.

The Calibre 37-01 performs many complex tasks, but great efforts have been made to simplify the movement; a 70-hour power reserve is provided by a single spring barrel, in part due to the fact that the balance spring has no regulator attached directly to it: regulation is performed by using four gold screws on the balance wheel itself. The chronograph is a flyback, so that after starting the chronograph using the pusher at 2 o’clock, it can be stopped and immediately restarted from zero by pressing the flyback pusher at 4 o’clock.

The dial has three subdials, chronograph hours at the top, chronograph minutes at 3 o’clock, and continuous seconds at 9 o’clock. This subdial also has a very subtle power reserve indicator. The Panorama date – the brand’s signature large date – is towards the bottom of the dial.

The sapphire caseback reveals part of the automatic movement, with so-called Glashütte stripe decoration (a bit wider than the similar Côte de Genève) on the automatic bridge. The platinum version of the Senator Chronograph Panorama Date has a blue Louisiana alligator leather strap, and a clasp in platinum. It’s fairly large at 42 millimetres, and above all, it’s quite thick at 14 millimetres, and fairly heavy in the platinum version.

One other marking on the dial is significant. At the top, Glashütte i/SA. Glashütte in Saxony. The company is proud of its German, or to be more specific, Saxon origins, and so they express this identity on the dial. The price of this model is about $55,000. A version in red gold retails at about $31,500. But I think that it’s the platinum model that’s the real masterpiece.
For further information, see www.glashuette-original.com 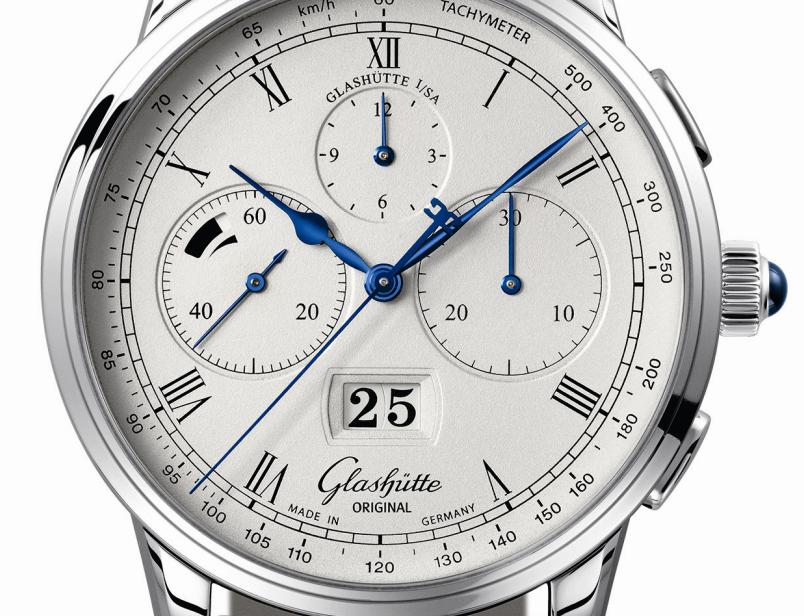 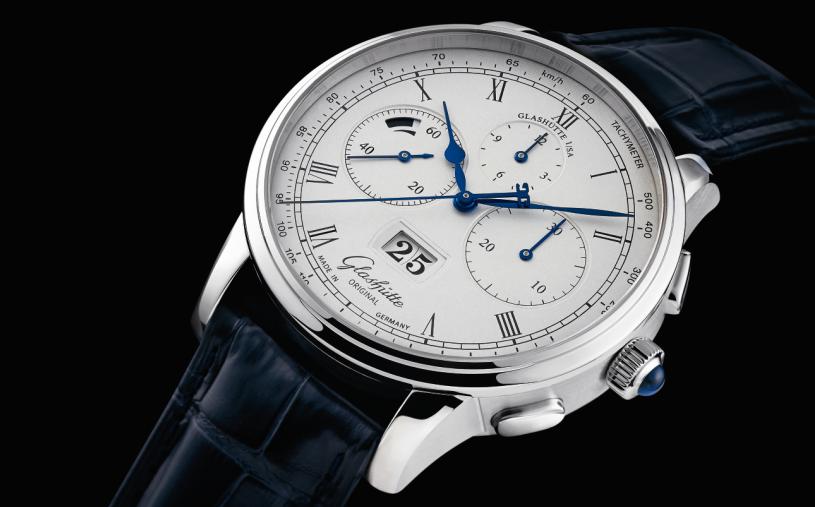 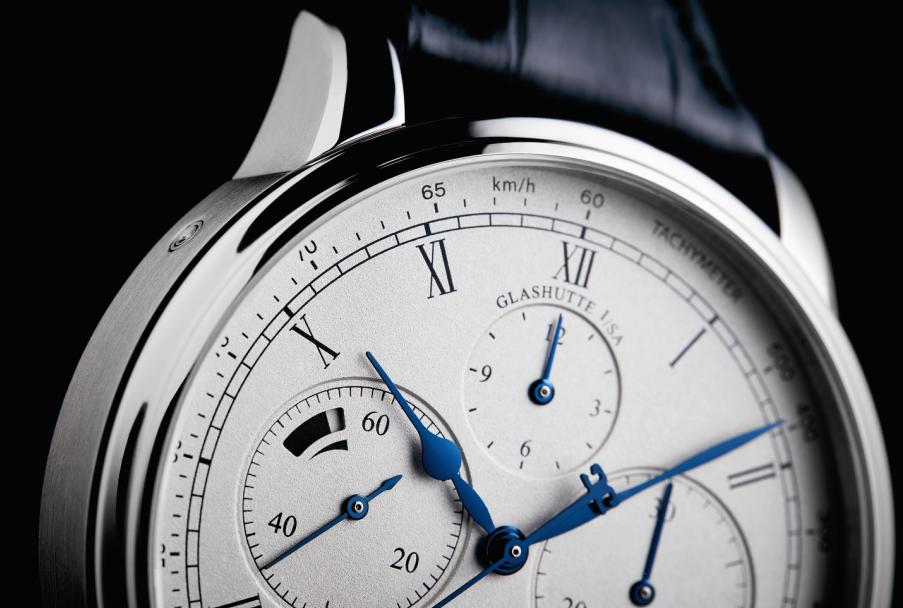 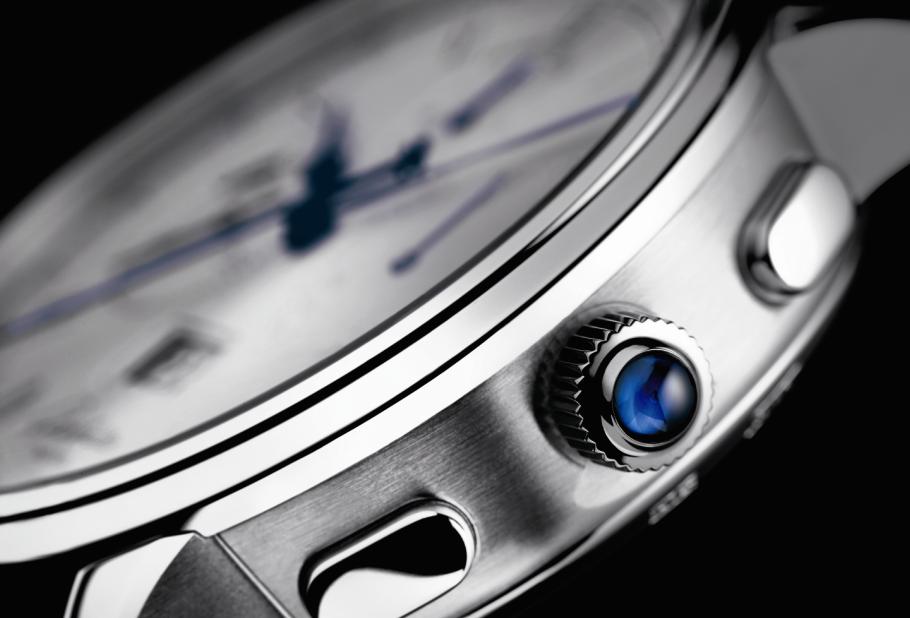 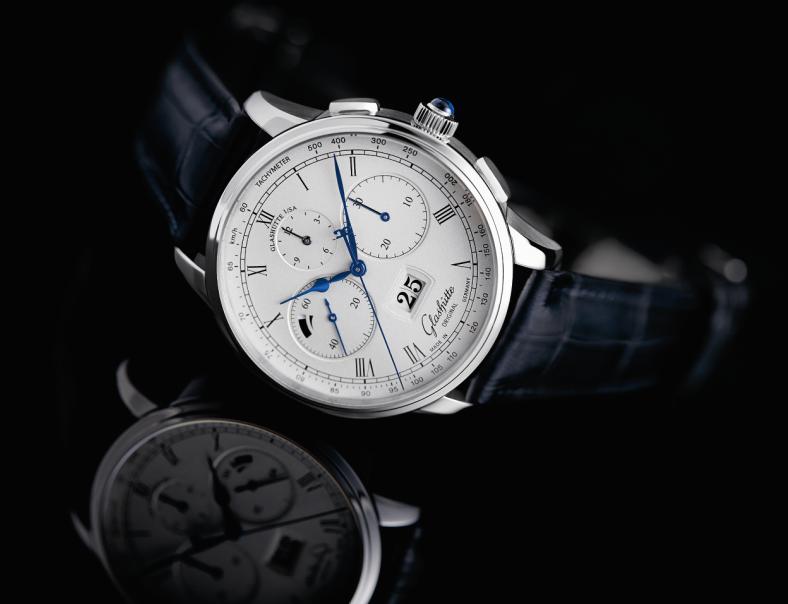 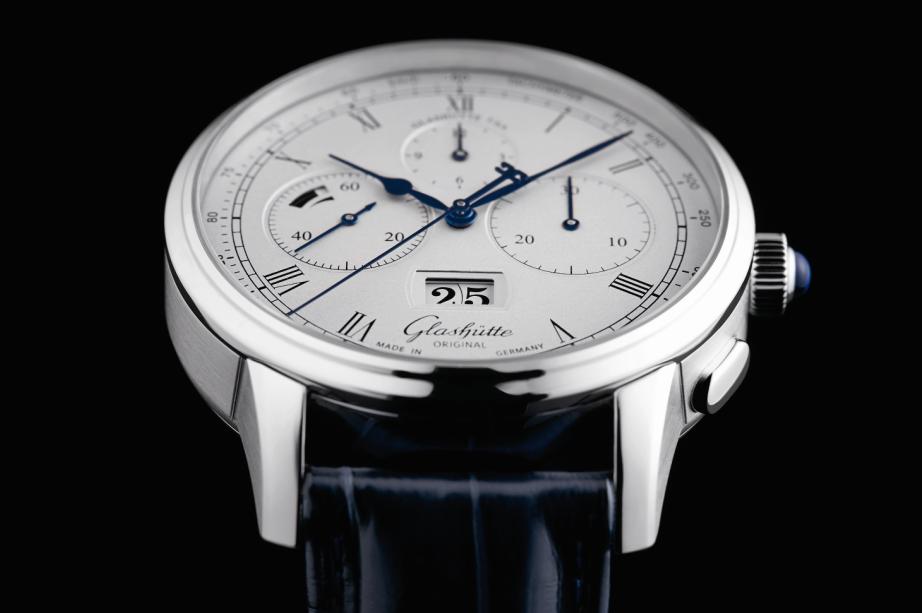 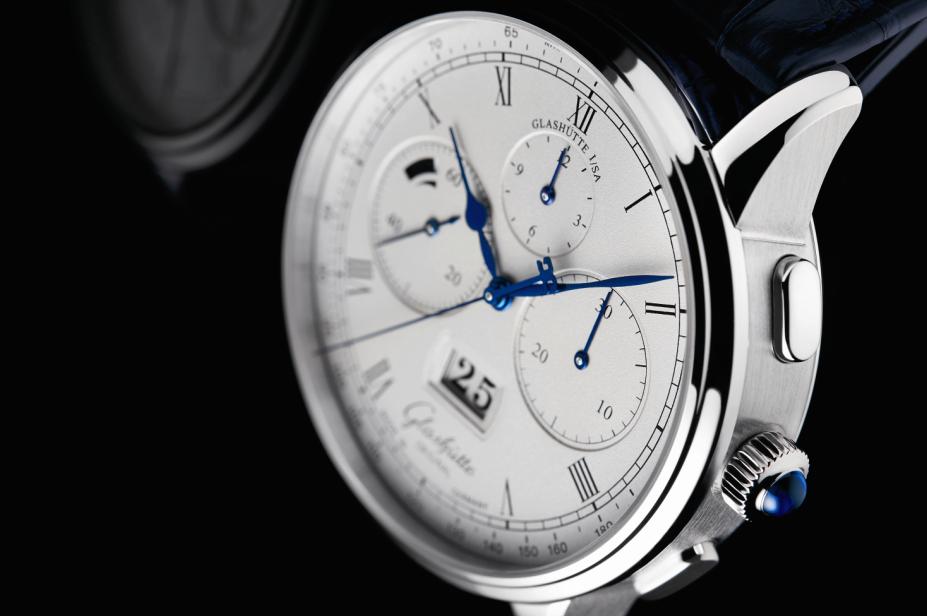 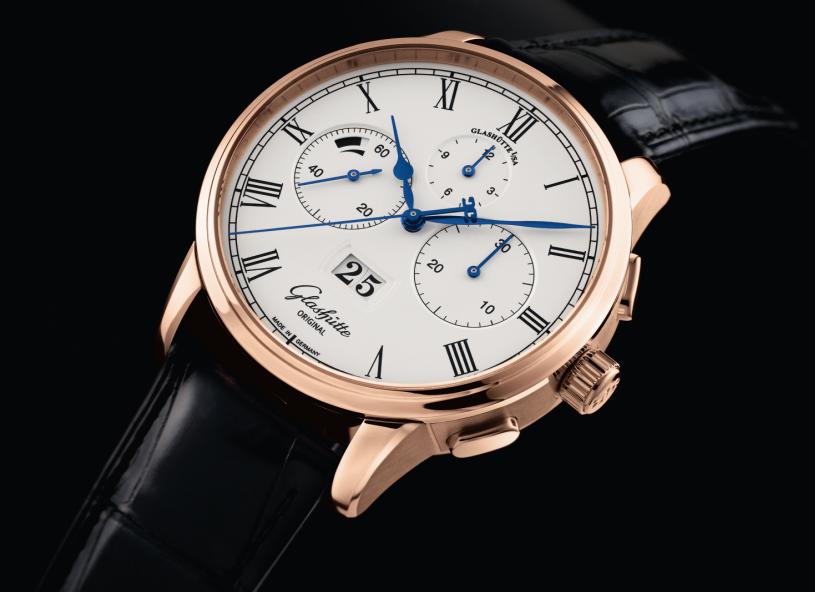