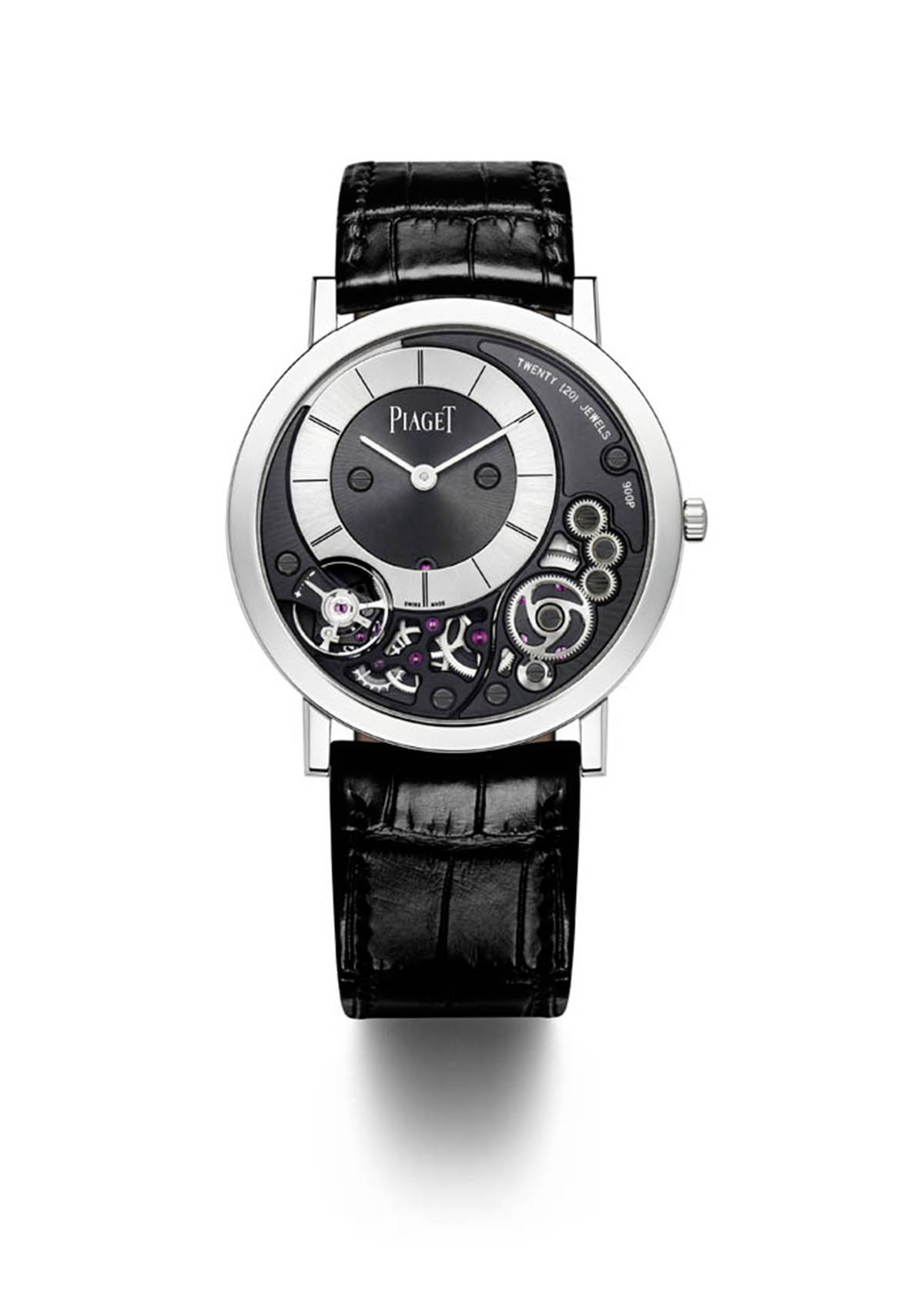 Just about every year Piaget collects another world record for the thinness of its watches, and this year (2014) they couldn’t avoid doing it again because it’s their 140th anniversary. The Piaget Altiplano 38 mm 900P is the world’s thinnest watch at just 3.65 millimetres, and the jewelled version of the watch is the world’s thinnest haute joaillerie watch at 5.65 millimetres. Apart from the records, it is a watch that looks really good, with an off-centred minimalist dial, the balance and some wheels visible at the base of the watch, and that amazing, slender profile. But the interesting thing about the watch is how they got there, how they brought the idea of attaining such a low thickness into effect.

The principal innovation in the Altiplano 38 mm 900P is the fact that the case has become part of the movement. Usually the movement is a sub-assembly, with all the wheels, balance, barrel, spring etc. housed in its own case, or at least on a mainplate, ready for mounting into the case of the watch itself. But the Piaget designers decided to use the caseback as the mainplate of the movement.

This was a bold move, because they had to ensure that the watch was stiff enough to resist any flexion forces which would inevitably move some of the delicate wheels out of plane and stop the movement. (The problem is less serious for ordinary watches, because the case is like a strong, protective shell for the movement inside.) The caseback had to be machined and pared down at some points to accommodate the components, and so establishing the thickness was not an easy task. In the end, the caseback in itself does flex as an isolated component, but when it has been assembled with the bezel and the watchglass, the total assembly has the necessary rigidity.

That was the fundamental move. It had another consequence: it reversed the construction of the watch, with the wheels further down and the bridges on the dial side. So they decided to use this, to leave the bridges in view through the dial. In the same way, the barrel is suspended from a bridge on the dial side, unlike the usual arrangement in which it is fixed to the mainplate. This reversed construction has another advantage: the bridges are the highest part of the movement, higher than the hands, and so if the watch is subjected to high pressure and the watchglass deforms slightly, it doesn’t come into contact with the hands, but with the bridges.

To save more vertical space, they made the dial and hands assembly smaller and off-centred, so that they would be in the same thickness of other components, principally the balance-wheel and the wheel-train. So components that are normally placed one on top of the other are, in this watch, side by side. Of course, they worked on the components themselves, slimming down each of the 145 parts in the movement. Some wheels are just 0.12 millimetres thick, which is not much thicker than your average human hair.

All the components are carefully finished, with wheels alternately sunburst or circular satin-brushed for extra visual interest. The bridges are pierced and blacked to reveal the wheels beneath. The jewels of the movement provide tiny notes of colour in a composition dominated by the white of the white gold case and buckle, the black-coated movement, and black alligator strap. It looks great, the engineering is amazing, and the jewel-set version is impressive. The watch is manually-wound, with a 48-hour power reserve. Price of the standard version is in the order of CHF 28,000. 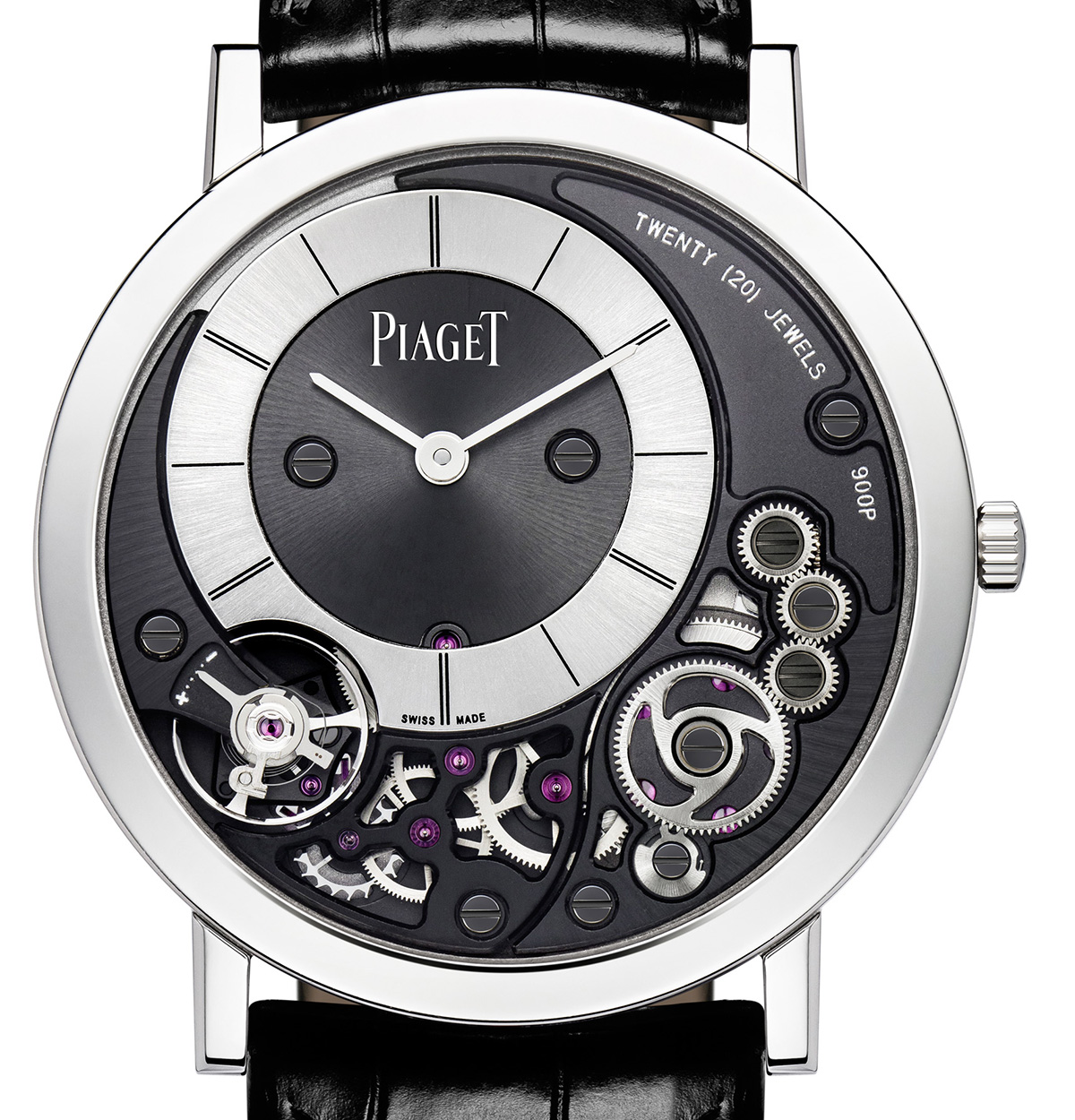 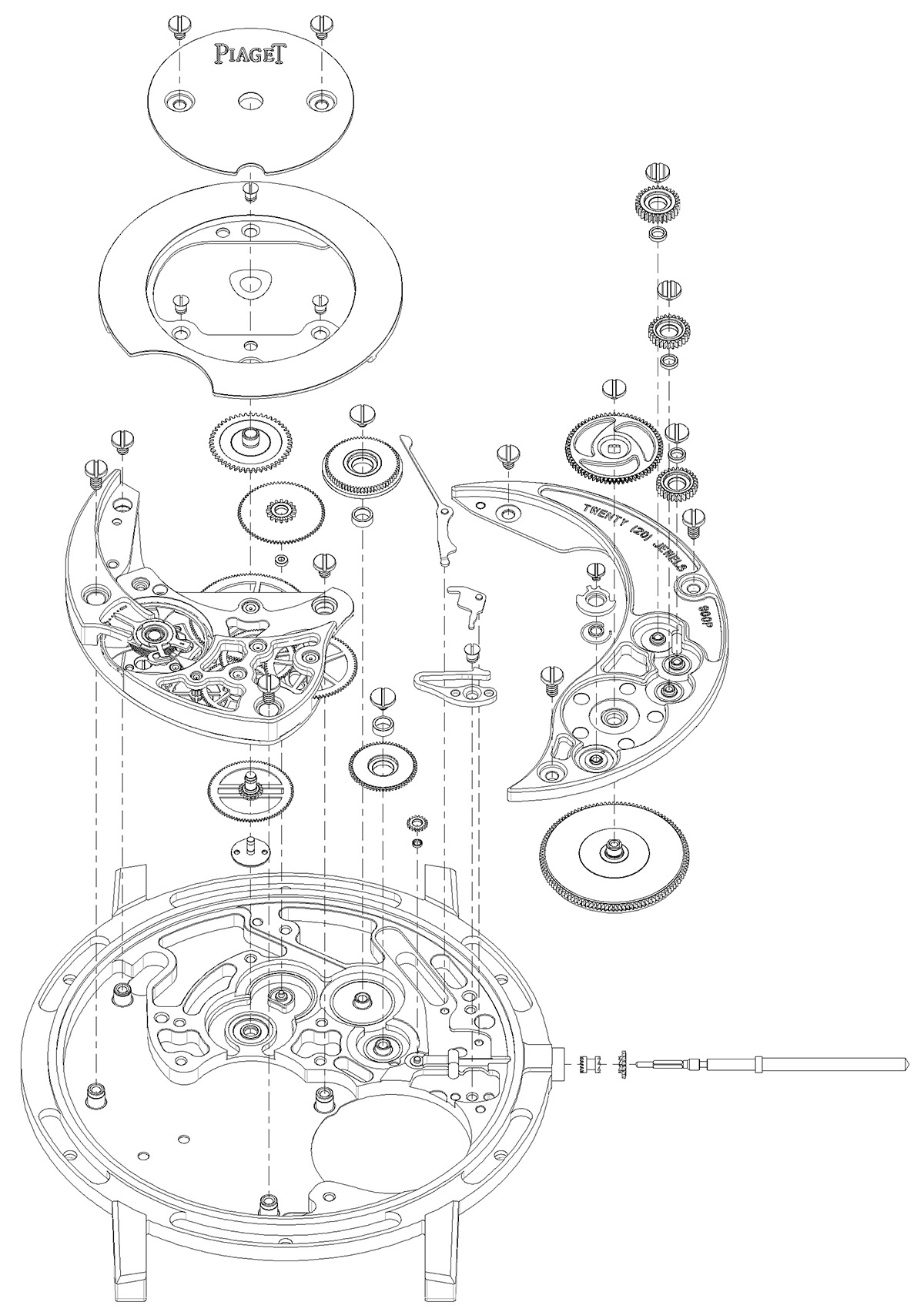 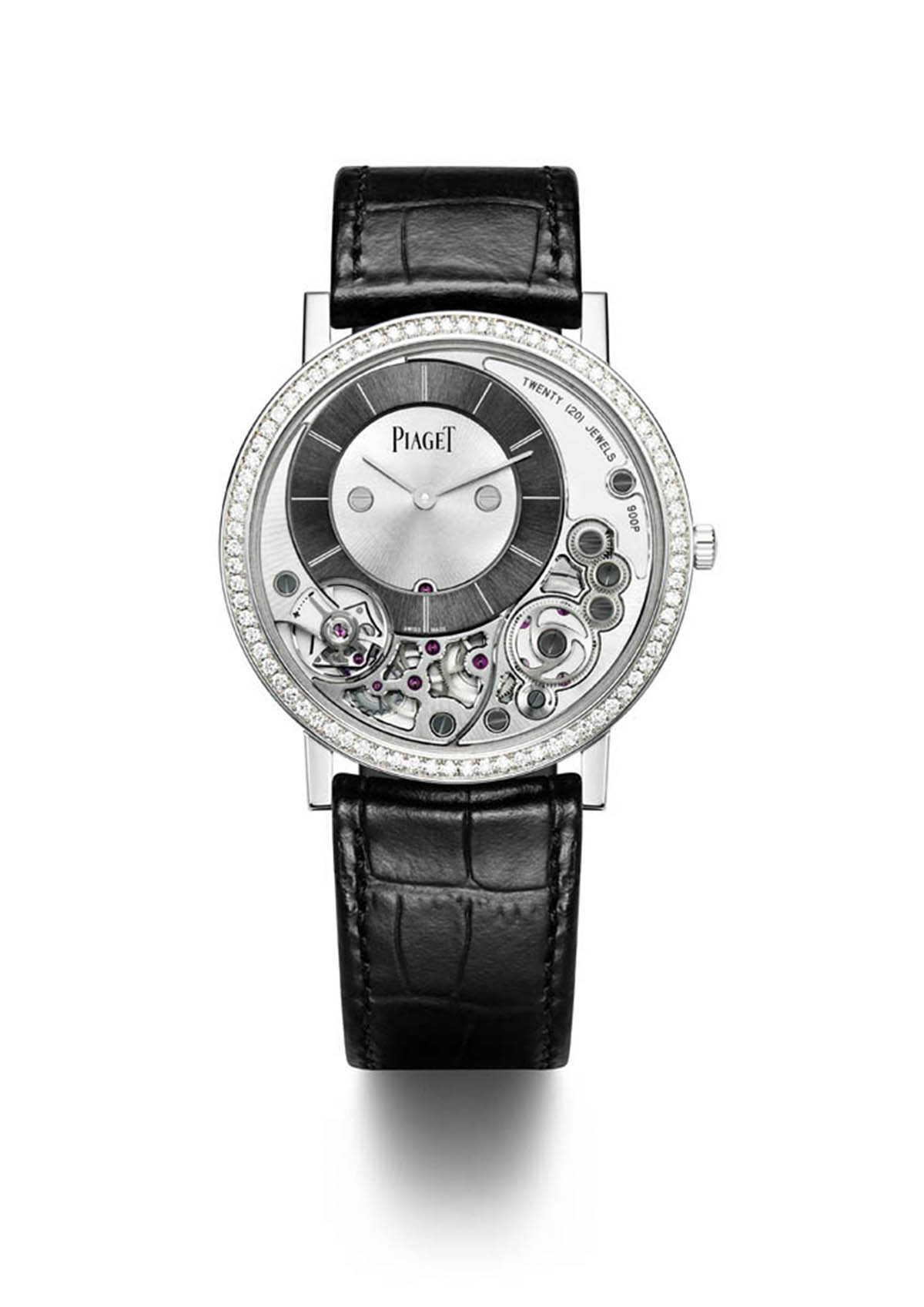 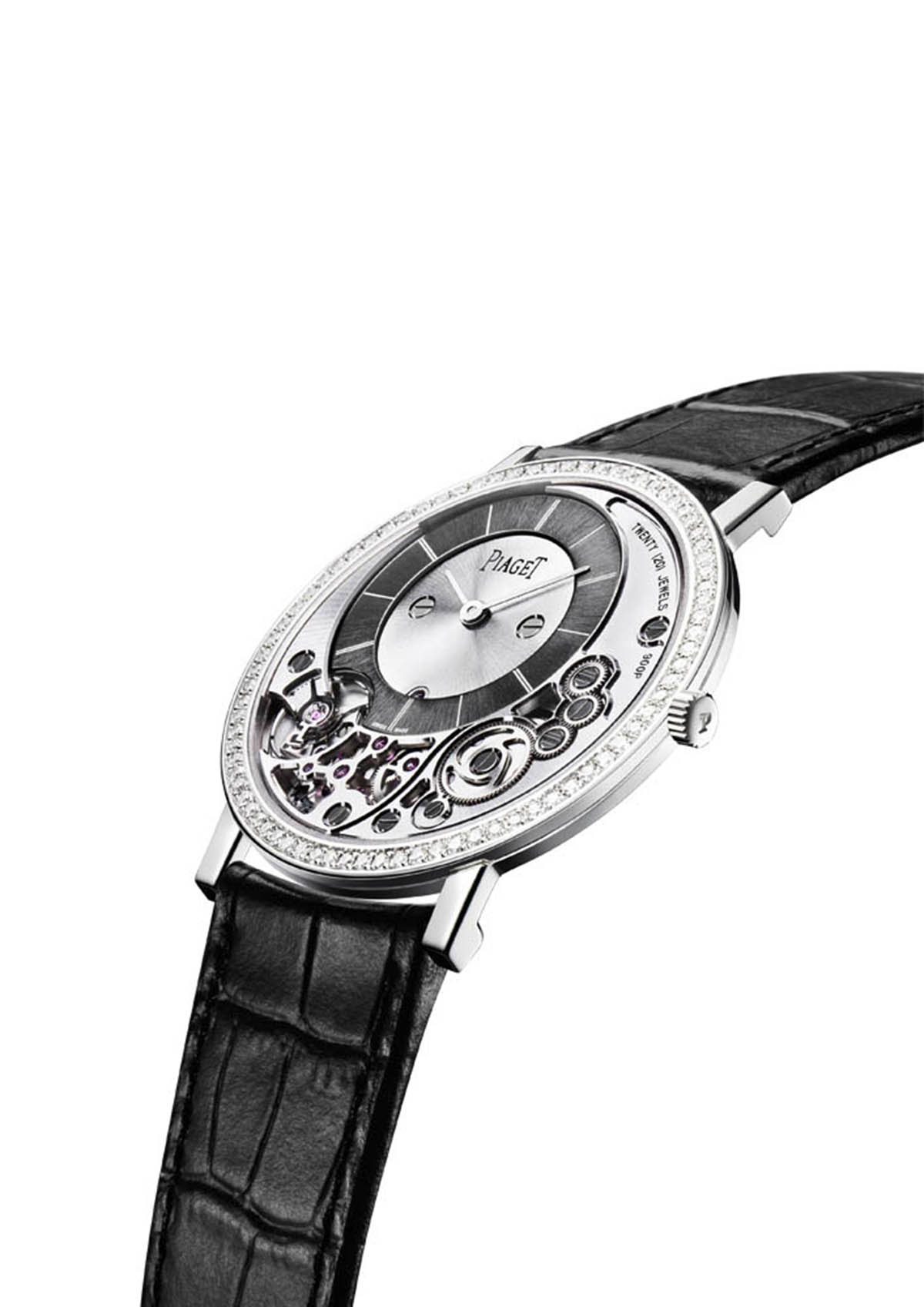 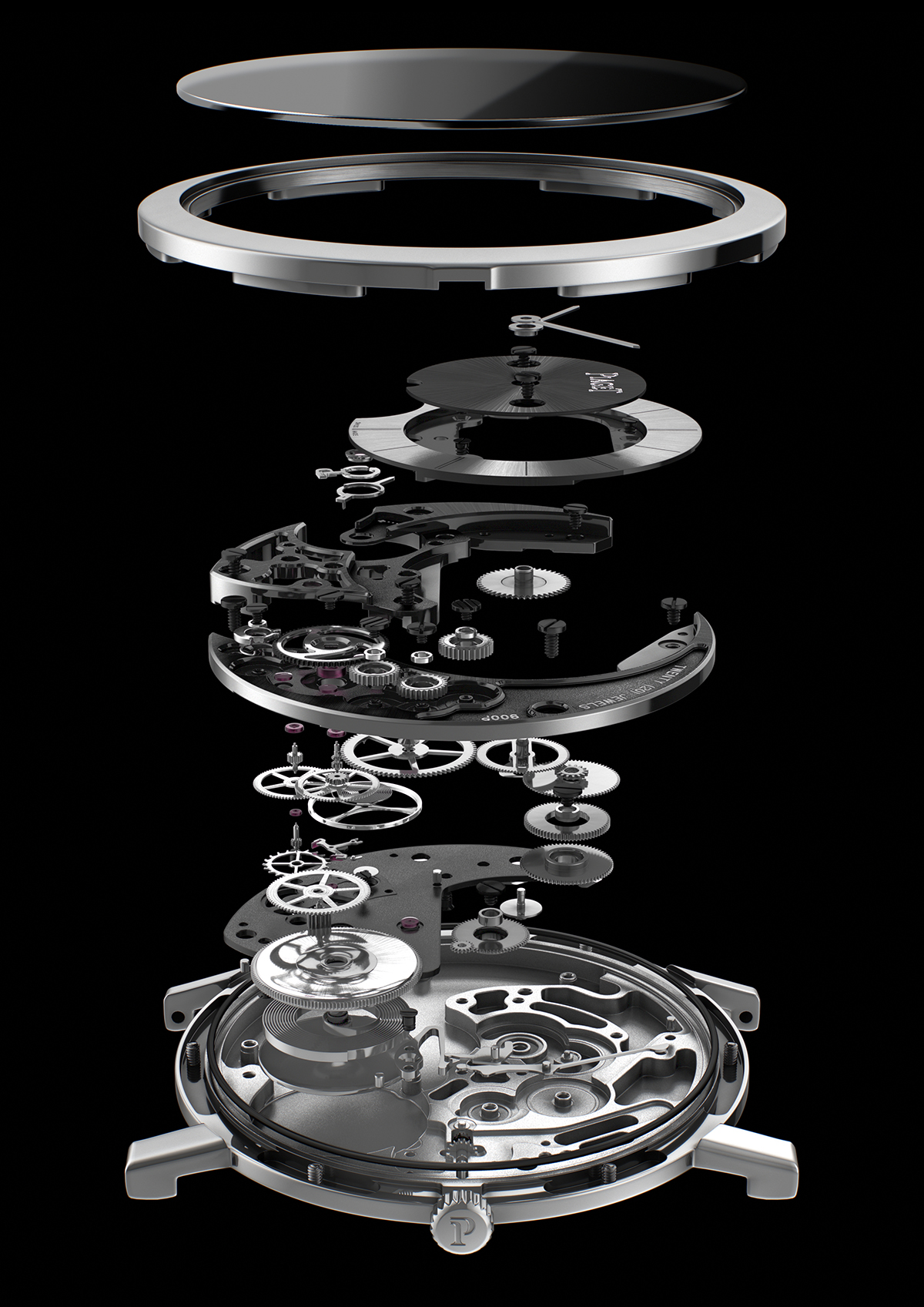