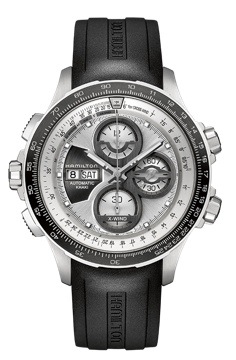 Hamilton is a very happy brand. Like many other watch manufacturers, they have the pleasant problem of not being able to make enough of their watches. They are very comfortable as part of Swatch Group, which has the resources and the movements they need for their products. They have a long heritage that provides a vast storehouse of motifs, shapes and themes from which to develop new products. They have close connections to Hollywood, and are constantly being asked to develop bespoke pieces (often on an impossibly short timescale) for the next action movie. Perhaps their most famous movie appearance is the triangular Ventura watch that appeared in the Men in Black movies, but their timepieces have also starred in Die Hard, Ocean’s Eleven, Predators, Independence Day, A Beautiful Mind and many others.

Hamilton was founded in 1892 in Lancaster, USA, and it made pocket watches for the railroad industry, for the US Armed Forces in World War I, and in World War II in which they halted civilian production in order to supply the forces with over a million watches. After pioneering electric and LED watches (the Ventura started life as the first electric watch in 1957), the company was purchased in 1974 by SSIH, later to become Swatch Group, and in 2003 production and headquarters were transferred to Biel in Switzerland. Today their major marketing theme is “American spirit, Swiss technology”, and another fundamental part of their image is aviation, with the orange-coloured aerobatics aircraft they sponsor often on display in various parts of the world.

Their brand ambassador Nicolas Ivanoff, one of the leading French acrobatic pilots, helped in the design of the X-Wind Auto Chrono, a chronograph watch with a very complex dial, in which the chronograph subdials are given a cockpit-instrument feel by their design with successive levels that adds a sense of depth. The chronograph pushers are on the left of the dial, because the two crowns on the right are used for adjusting the two scales on the bezel that can be used to calculate course correction in the case of crosswind. The crown at 2 o’clock rotates the lower bezel, that at 4 o’clock the upper bezel, and somehow, knowing the magnetic course bearing, speed and crosswind, you can read off the magnetic bearing that you have to head to get you where you want to go even when the wind is blowing you off course. It’s basically a circular slide rule, and doesn’t have anything to do with the watch movement, but it’s an interesting function and gives the piece that aviation technology look that has become a Hamilton hallmark.

The movement is the Hamilton H-21, an automatic chronograph movement based on the Valjoux 7750, personalized with H-motif machining on the bridges visible through the caseback, the Hamilton-branded oscillating weight, and a higher power reserve, increased to 60 hours. It’s a large watch at 45 millimetres, with a case in stainless steel, and black rubber strap or stainless steel bracelet. It’s a limited edition, with 1,999 pieces for each of the two versions (black dial and satin metal sunburst dial). The price is $2,395, which puts it right at the top end of the Hamilton range. Find stores at www.hamiltonwatch.com 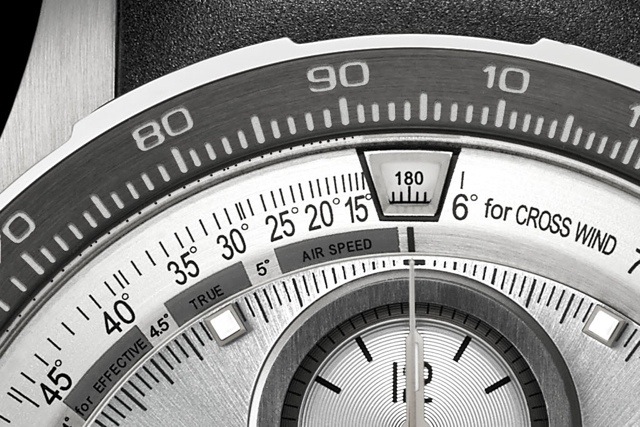 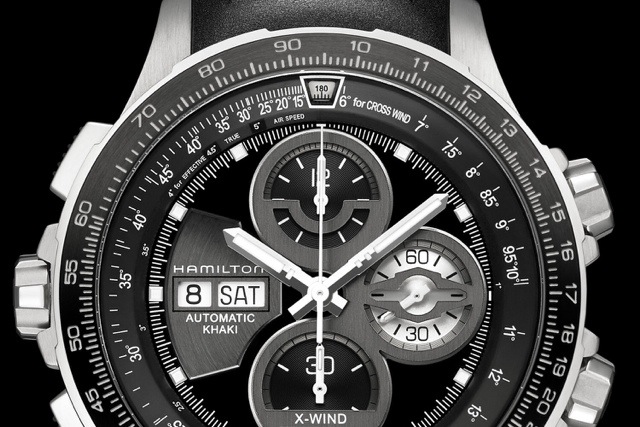