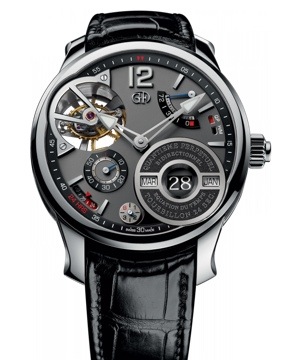 The “Équation” in the watch’s name is the Equation of time, a relatively rare complication but one that is close to the heart of mechanical watchmaking. The great 19th-century watchmakers were often struck by the analogies between the instruments that they made and the sun, moon and planets, whose movements are like a gigantic mechanism in the sky. Man’s subdivision of time is determined by the motion of the earth and the sun, so that a day corresponds to the time that the earth takes to revolve once on its axis (as determined by when the sun returns to the same apparent position in the sky), and a year corresponds to the time that the earth takes to complete one orbit around the sun.

The problem is that while 24 hours per day and 365 days per year is a good approximation, these subdivisions don’t correspond exactly to the astronomical movements of sun and earth. The system would be perfectly accurate if the earth’s orbit were circular, and its axis of rotation were perpendicular to its orbit. But neither are true: the earth’s orbit is slightly elliptic, and its axis of rotation is tilted. The effect of these anomalies is that the apparent position of the sun in the sky changes, so that apparent solar time (the time that is indicated by a sundial) can be as much as 16 minutes ahead of conventional time, or up to 14 minutes behind. There are four peaks in difference every year, two ahead, two behind. It is this difference that a watch with the Equation of time complication displays. The complication is perfect for a perpetual calendar watch, because the difference between apparent and mean solar time depends on the day of the year.

In the Quantième Perpétuel à Équation, Robert Greubel and Stephen Forsey have devised a user-friendly perpetual calendar watch. Normally, adjusting the date on watches of this type require a lot of work on pushers, but in this watch, everything is done from the crown, which can be in two modes, time setting or calendar setting. The selected mode is shown in a small window at 2.30. Another feature that facilitates use of the watch is the calendar display, with day, date and month shown on a subdial at 3 o’clock. Leap year is shown on a small dial at 6 o’clock. At the top left of the dial, the 24-second tourbillon with axis inclined at 25° improves the watch’s precision. 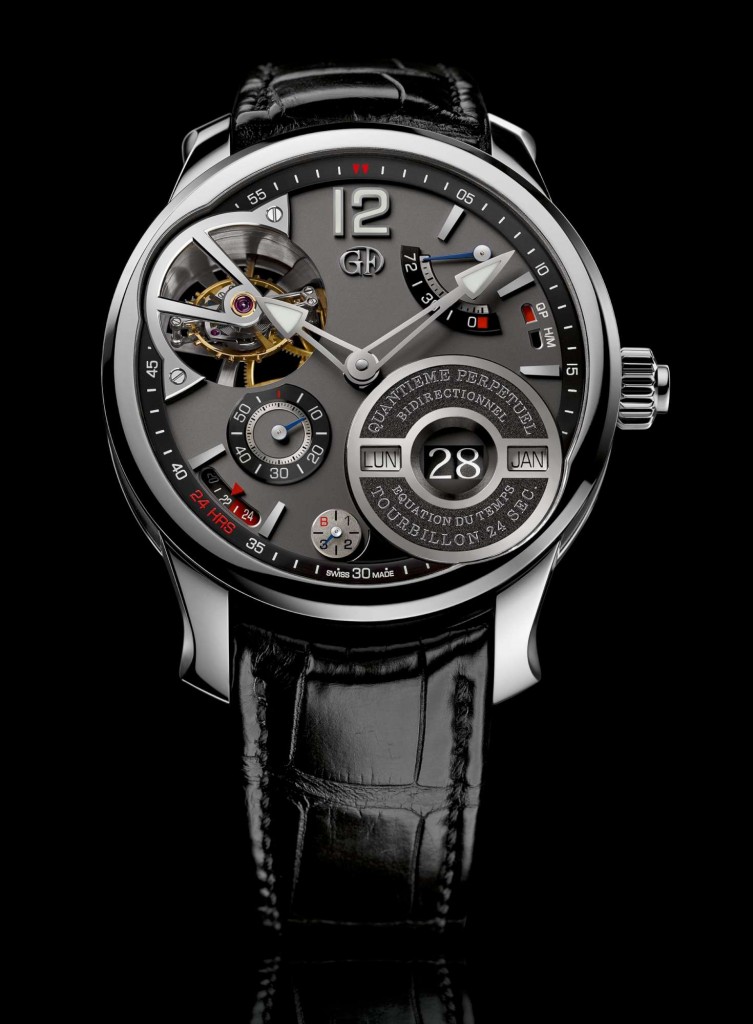 The Equation of time display

The Equation of time is shown on the reverse of the watch, along with seasons and year shown in four digits. The difference between apparent solar time and mean solar time is shown by means of two sapphire discs, one with a scale in minutes, and another with red and blue sections in a sinusoidal profile that rotates once a year. The intersection of the line on the first disc and the form on the second show the time difference in minutes, whether positive (red) or negative (blue). 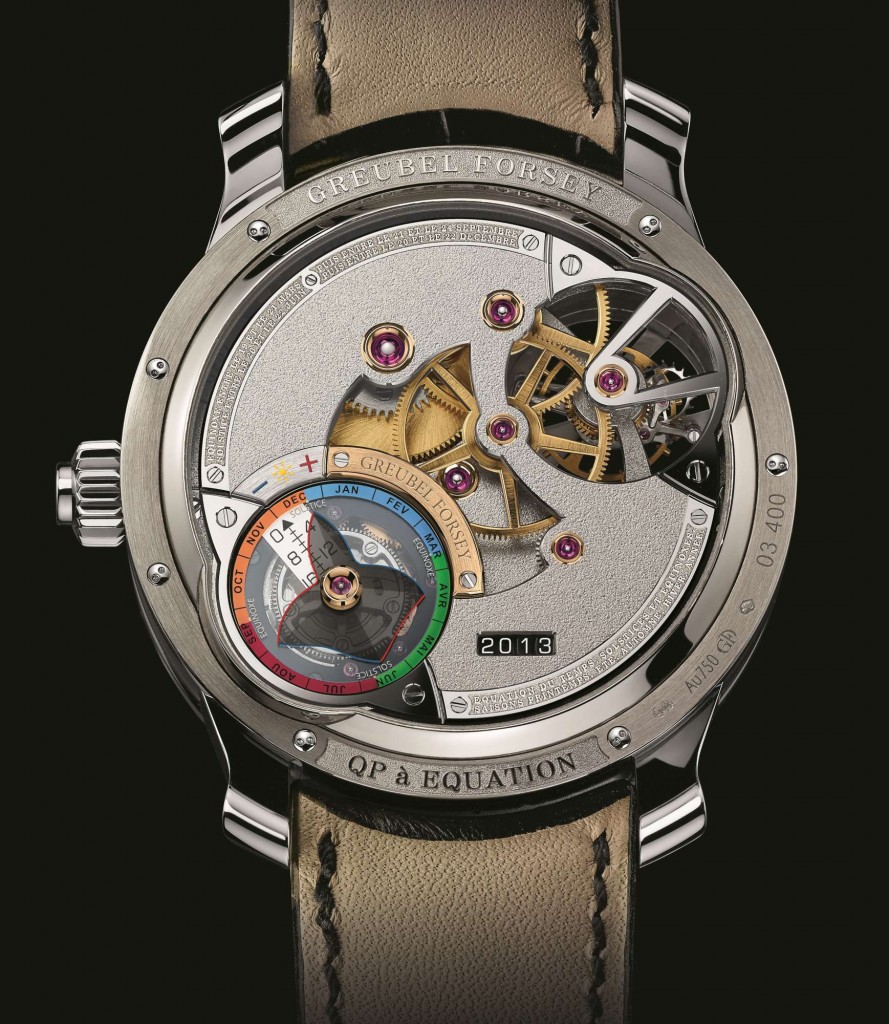 Not a watch for everyone… series and price

As with all Greubel & Forsey watches, this is a complicated timepiece, with 570 components. Its exceptional power reserve of 72 hours is provided by two barrels. Just five Quantième Perpétuel à Équation watches will be made in 2014, and they cost CHF 670,000 each. The watches are made in the company’s workshops at La Chaux-de-Fonds, comprising a carefully-restored 17th century farmhouse named Ancien Manège, and a modern atelier alongside in a strikingly tilted modern building in steel and glass. 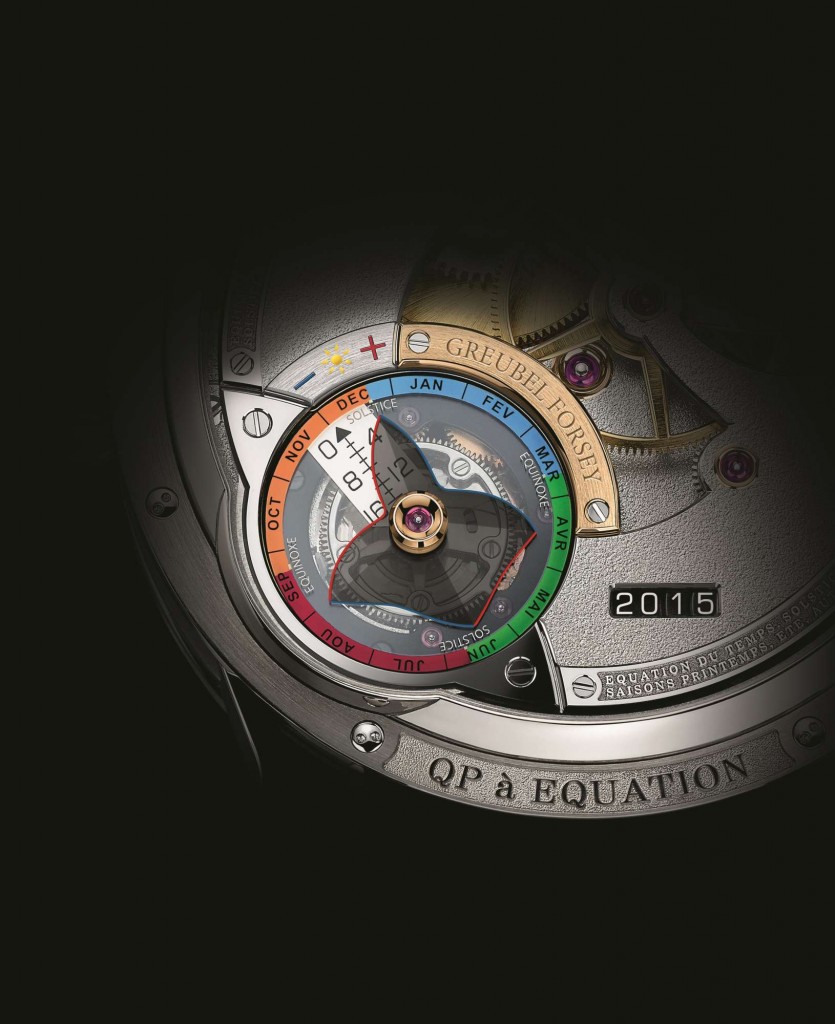 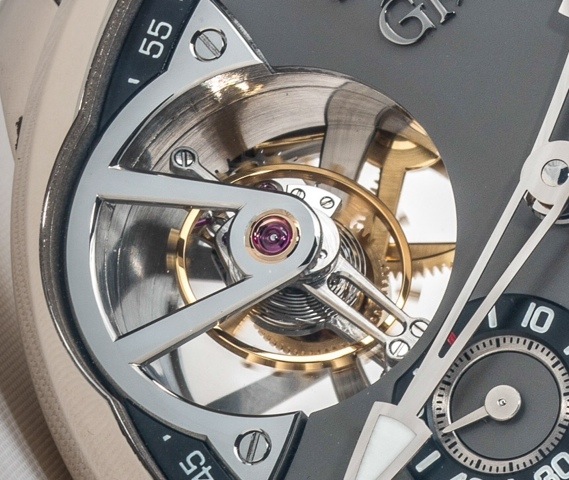