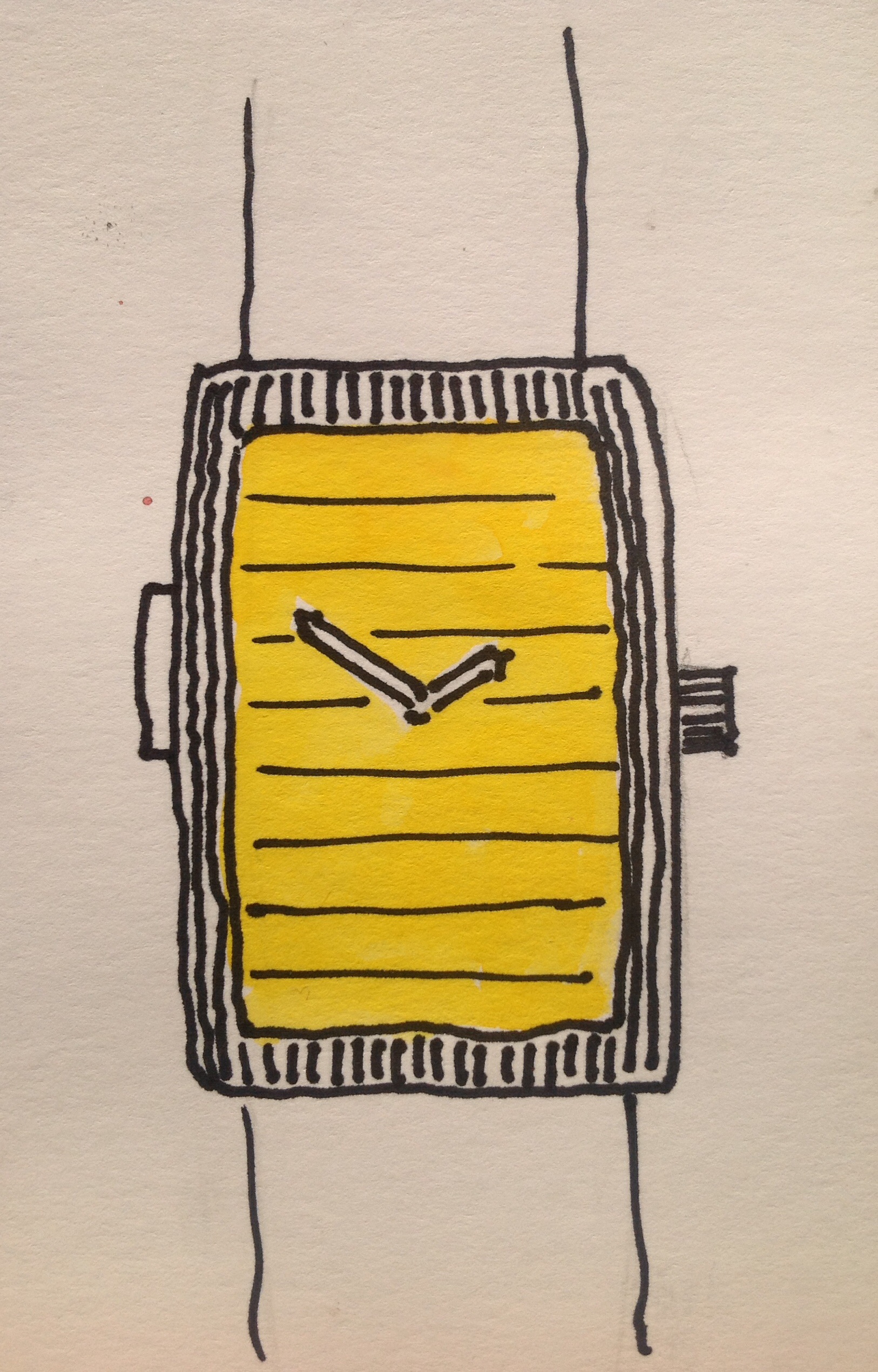 Many watches have an indicator for the day of the week, but they often include a perpetual calendar that provides a lot of information, and so the day is shown in a small window that can be difficult to see without putting on your glasses. This watch is designed to change colour every day at zero hours, providing a constant reminder as to which day of the week it is, and giving the watch a new appearance every day. The sequence of colours is based on the ancient gods linked to the various days in different cultures, and thence to the planets and metals. For example, Friday is so-called after Freya, the Norse goddess of love and fertility; the day of the week in other languages, for example vendredì, is linked to the same goddess from different traditions, in this case Venus. The metal for Friday is copper, the colour green. The seven-day sequence includes all the primary and secondary colours, plus grey/black, the colour of Monday, linked to the moon. It is also related to the ancient tradition of alchemy, in which the base metal lead (grey, Monday) was transformed into gold (Sunday) through a sequence of mystical operations.

The colour-change mechanism is based on the split-flap display that can still be seen in some stations and that used to be part of 1970s alarm clock radios. Even though miniaturized, it requires a deep dial to provide space for the movement and the display. At midnight, the watch changes colour, with the slats going through their sequence one after another, for a complete cycle plus one, to provide a theatrical display lasting about 15 seconds. A pusher at nine o’clock activates the colour change to adjust the day or just to have fun. The mechanical movement has two barrels, one for the time functions, one for the colour-change mechanism. As well as activating the colour change sequence, pushing the pusher also injects some energy into the respective barrel. 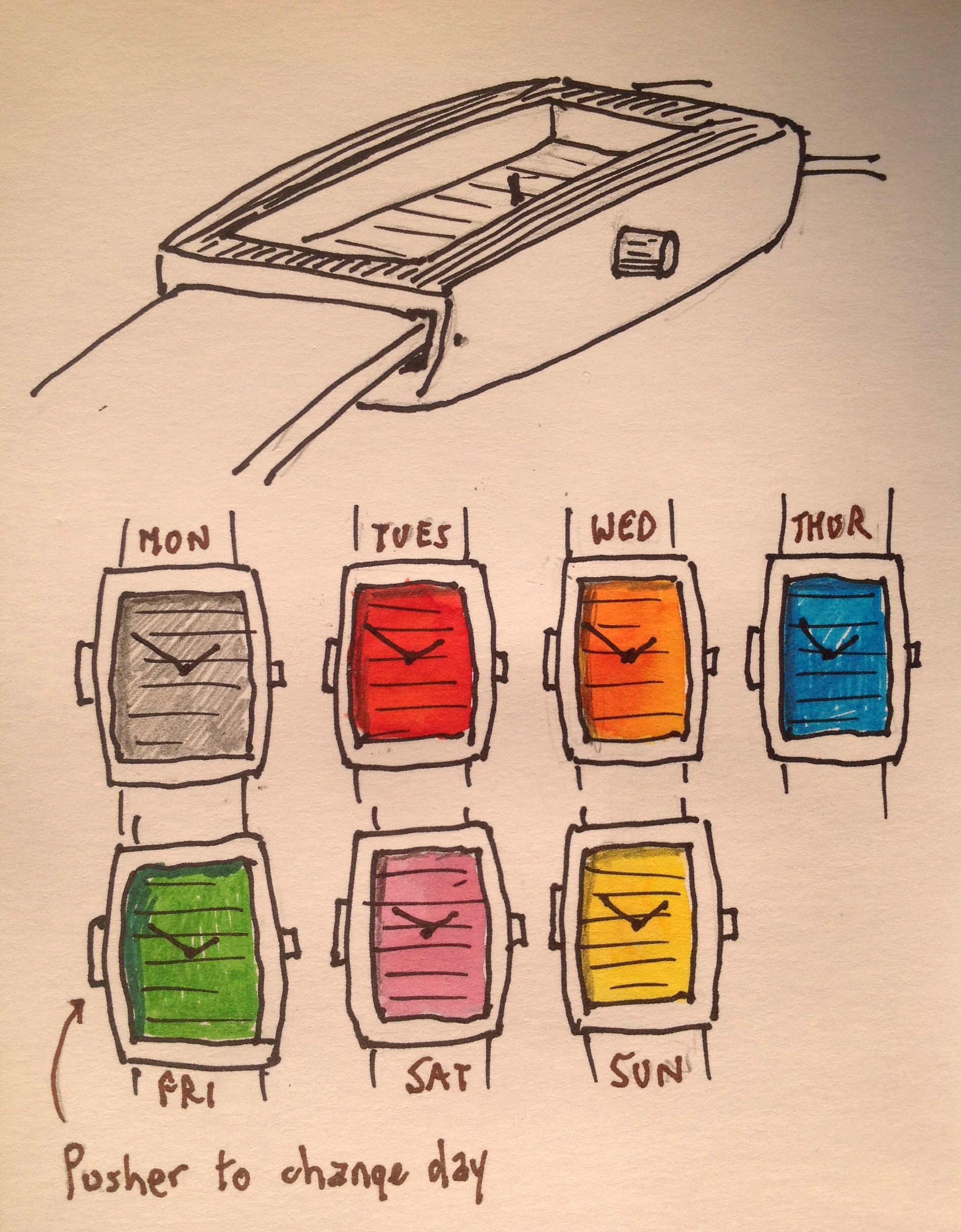 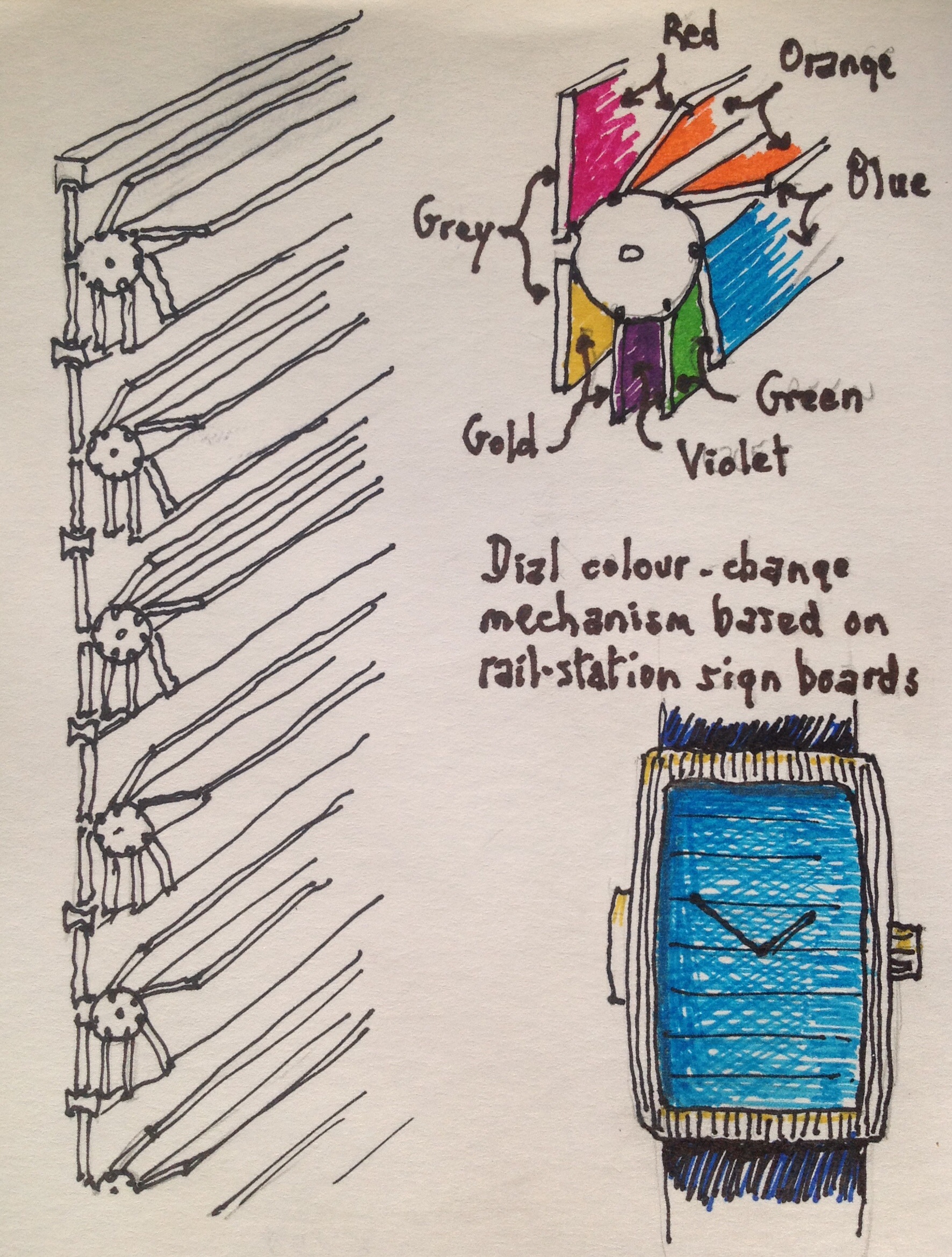 I’m male and so I can only guess here, but I think that there could be a demand for a women’s watch that helps the user keep track of her own 28-day cycle, and plan her own life, and that of the next generation, accordingly. The watch has been designed to present the information clearly but unobtrusively, and to enable the user to adjust the watch easily. In fact the cycle in question, though conventionally estimated at 28 days, can vary from woman to woman from 21 to 35 days. The fertile window generally runs from five days before ovulation to one or two days after. The external scale runs from day 1 to day 36, and the wavy hand points to the day. The user can set her normal cycle length by using the crown, which has a function changer at 2 o’clock: cycle length is shown by a diamond on a concentric ring inside the date numbers. The wavy hand flicks from the last day of her cycle back to 1. The fertile window, indicated by an arc of pink sapphires on another concentric ring, can also be moved back or forward according to the user’s personal observations. The crown is therefore used for three functions, time, cycle length, fertile window position. Because the numerals indicating the cycle day are fairly small, there is a Rolex-type magnifier in the watch glass, which can be rotated using the rotating bezel. As well as hour and minute hand, there is a small rotating continuous seconds indicator at 6 o’clock in the form of a yin-yang symbol, to show the user that the watch is operating correctly. 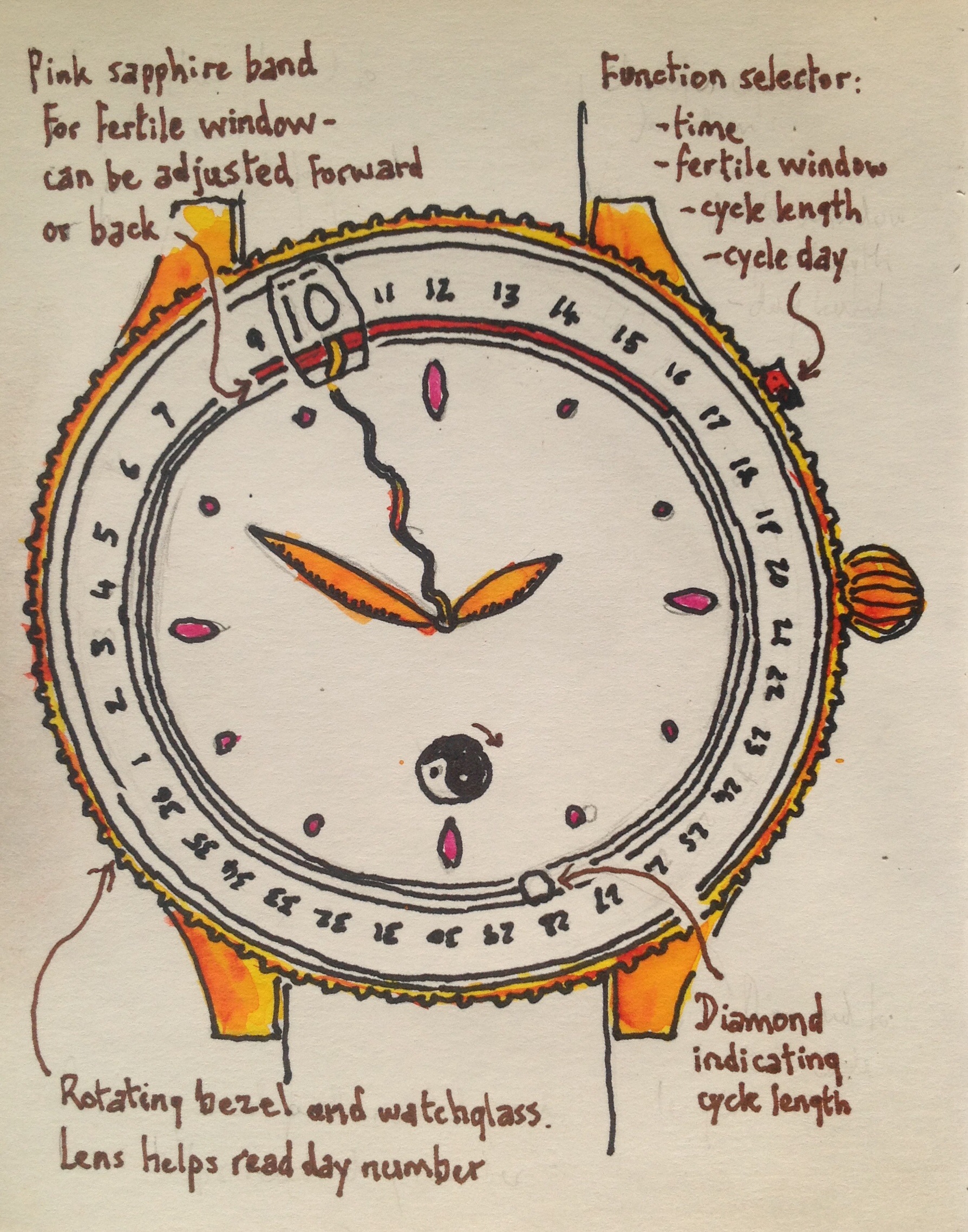 The concept of this watch is based on Fred Hoyle’s study of Stonehenge. According to his theory, the most significant feature of Stonehenge is not the massive stones, but the wide, concentric ring of 56 holes that date to the fourth/third millennia B.C. and so predate the monumental stones. Hoyle concluded that the 28-day lunar cycle was indicated by moving a marker stone representing the moon anticlockwise by two holes every day. By moving another marker, representing the sun, anticlockwise two holes every thirteen days, and two further marker stones three holes per year, it was possible to determine the points where the moon crossed the sun’s path. Whenever the moon and sun markers are directly opposite each other and the other two stones occupy those same opposing points, there will be an eclipse.

In the watch, four concentric rings all divided into 56 sectors show the progress of the marker stones. At the centre of the watch, a large moon in a window is obscured by a screen (the mechanism is that of the circular camera shutter) on the day of the eclipse. Two pushers make it possible to do what the Druids did – they moved the marker stones repeatedly in the correct sequence to predict an eclipse (remember the film “Pitch Black”?) – just by pressing the buttons, one for moving a day forward, one for a day back. Three windows on the dial present calendar information (day, date, month). The dial features a ring in yellow gold with a series of twelve tabs that mark the hours, and the motif also resembles Stonehenge seen from above. The pushers are concealed in two of the lugs. 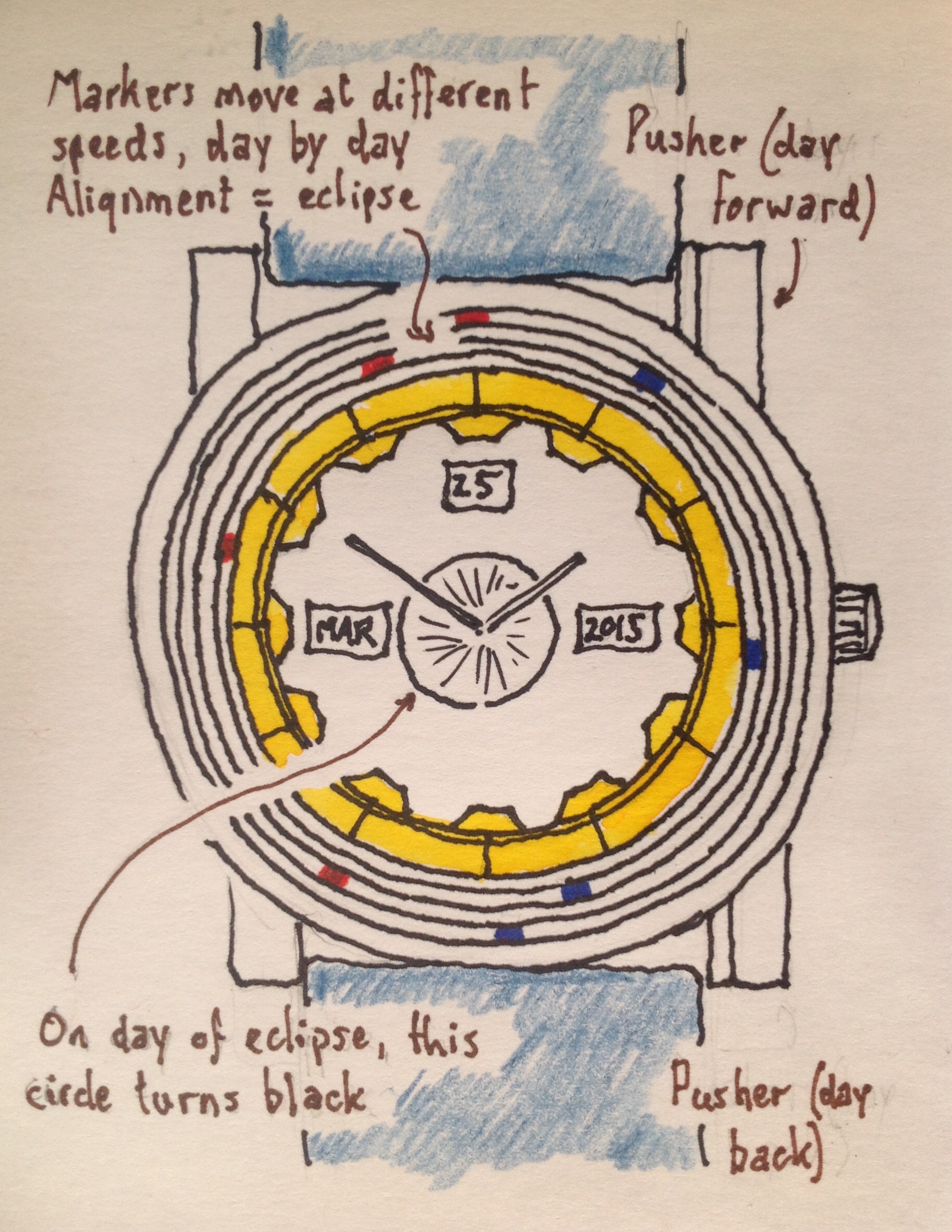 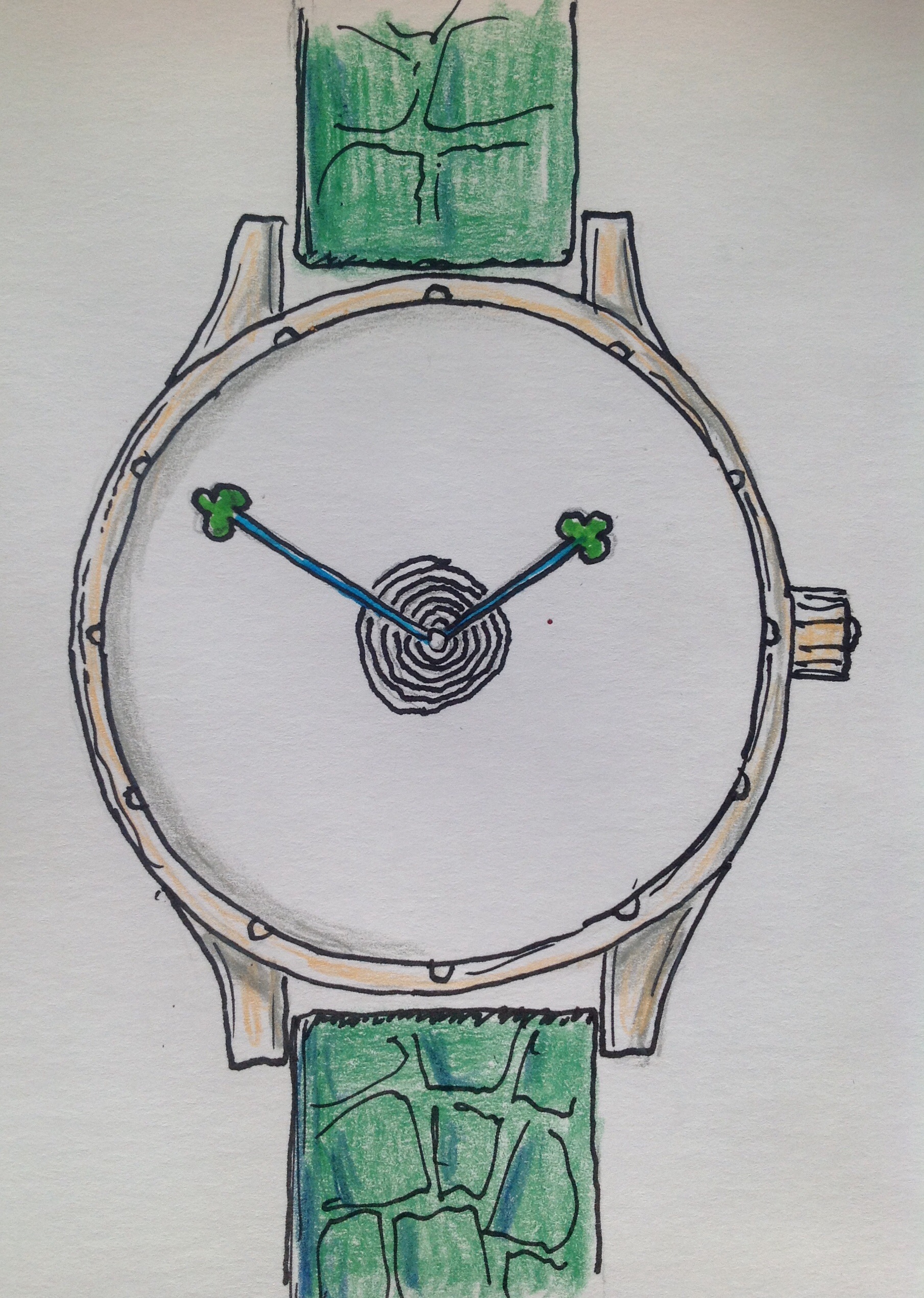 This watch gradually changes over its lifetime, using a system that reflects that of the annual rings of trees. The dial is in synthetic sapphire crystal with an evaporated gold coating on the underside. A diamond stylus is in contact with the underside of the dial, initially at the centre of the watch. The mechanical movement drives the dial, which rotates once in a year, and the stylus, which gradually moves outwards at a rate of 0.3 mm per year. The result is that as time goes by, the stylus removes the gold coating to leave a thin, dark, circular line. Trees have annual rings, this watch has a spiral instead, but the visual effect is very similar. The watch diameter of 45 mm provides a radius of about 20 mm for the rings, corresponding to 60 years. After this time, the stylus remains at the maximum diameter; when the final ring has been completed, the watchmaking company will change the dial for a platinum-coated version and reset the watch, adding to its rarity value. 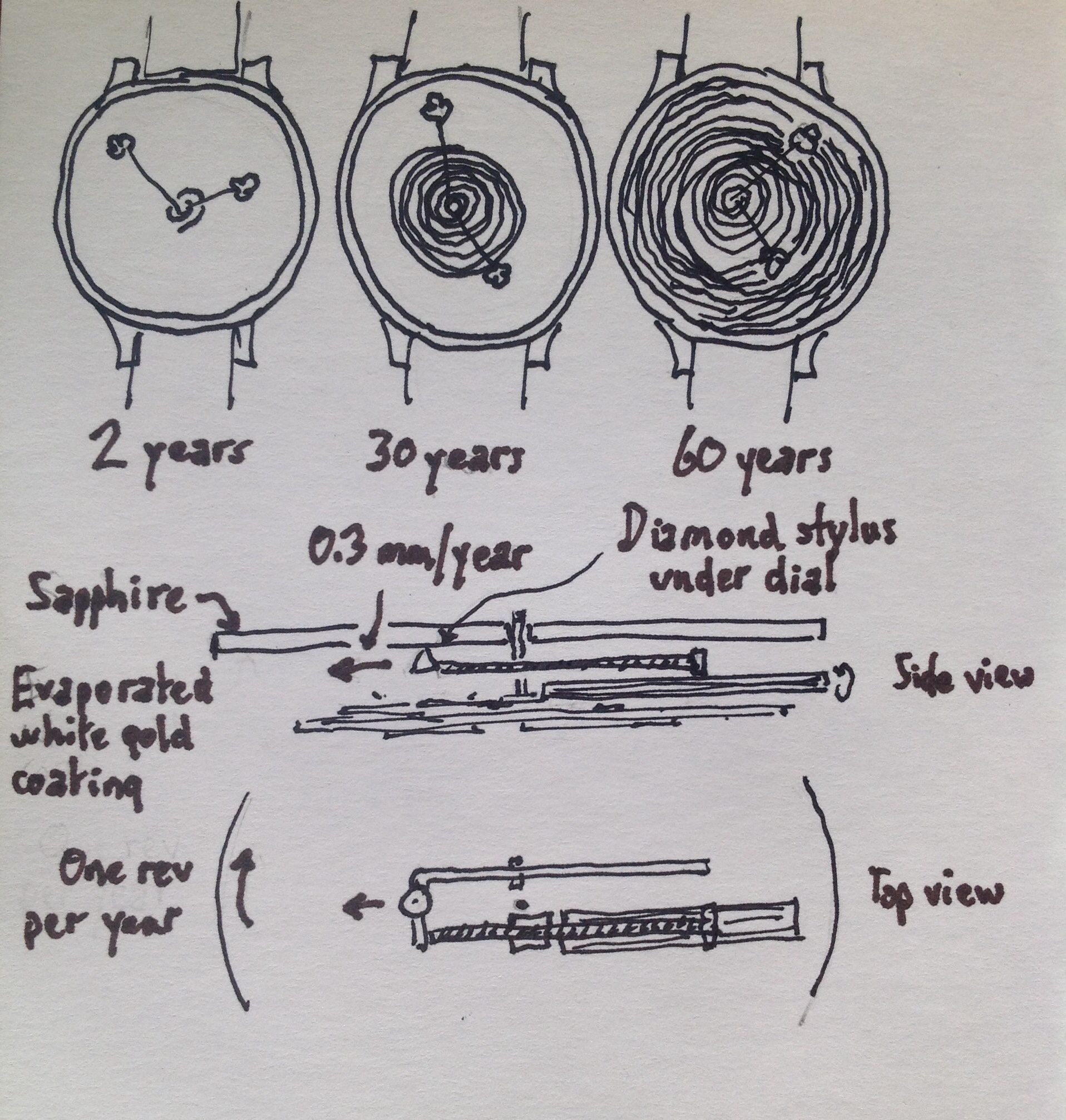 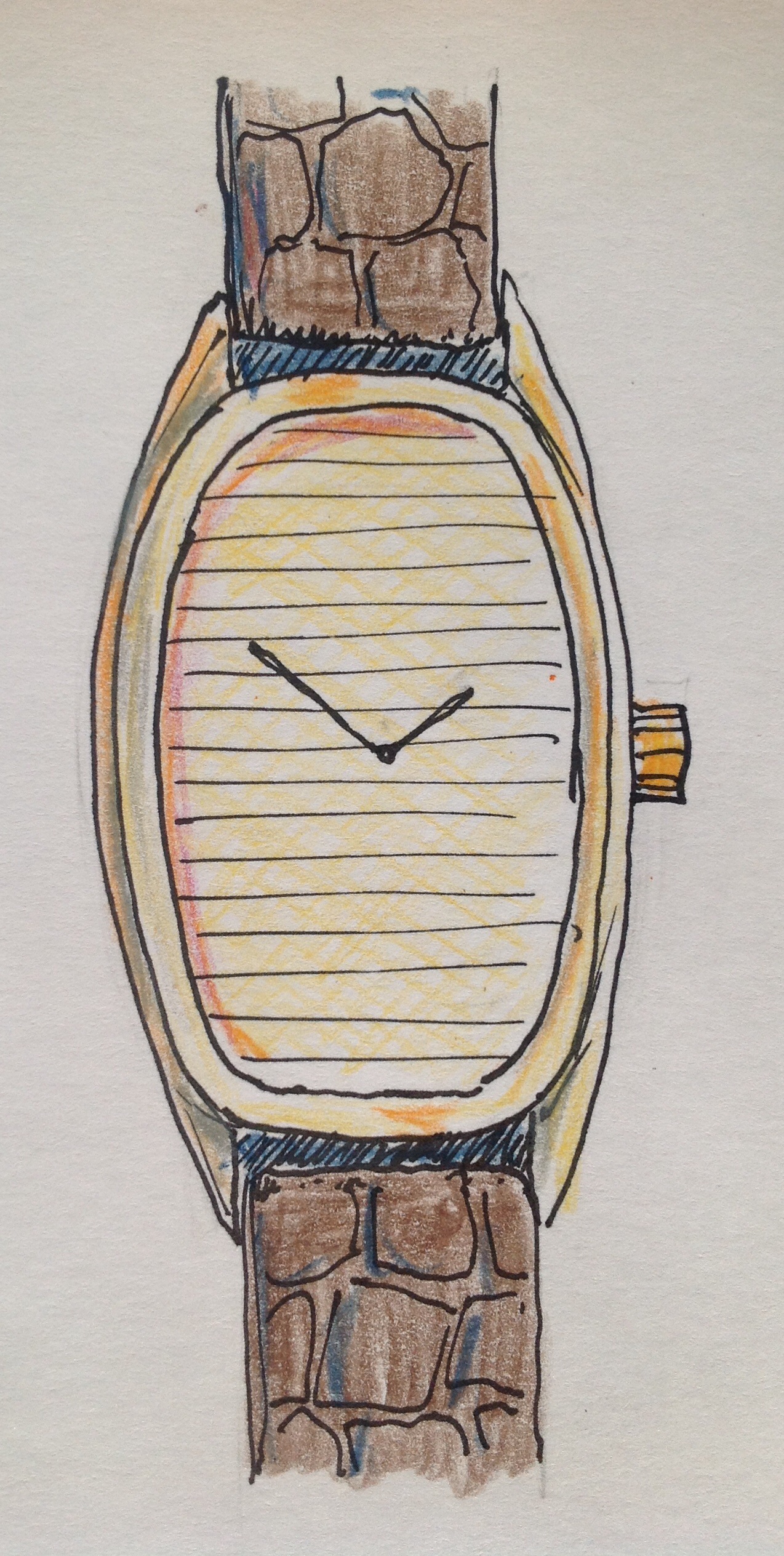 This watch was designed for forgetful people, helping them to remember an anniversary. Two dates can be set: at midnight of the first day, the yellow sapphire pavé dial turns blue (blue sapphire pavé), and on the second day, it turns red (ruby or rubellite pavé). After each 24-hour period with the new colour, the watch reverts to its yellow appearance. The idea is that you set the first change to a date that gives you time to organize a gift, night out or whatever, while the second colour change is for the big day itself. The dial is formed of a series of triangular-section slats, with the different pavé colours on the three sides. At the colour-change time, each slat rotates by 120° (or a few complete rotations plus 120°) in sequence until the whole dial has changed colour. The watch has a yearly calendar, displayed in windows visible through the sapphire caseback. Time, date and month are set using the crown; anniversary dates are set using the crown with a hidden pusher. 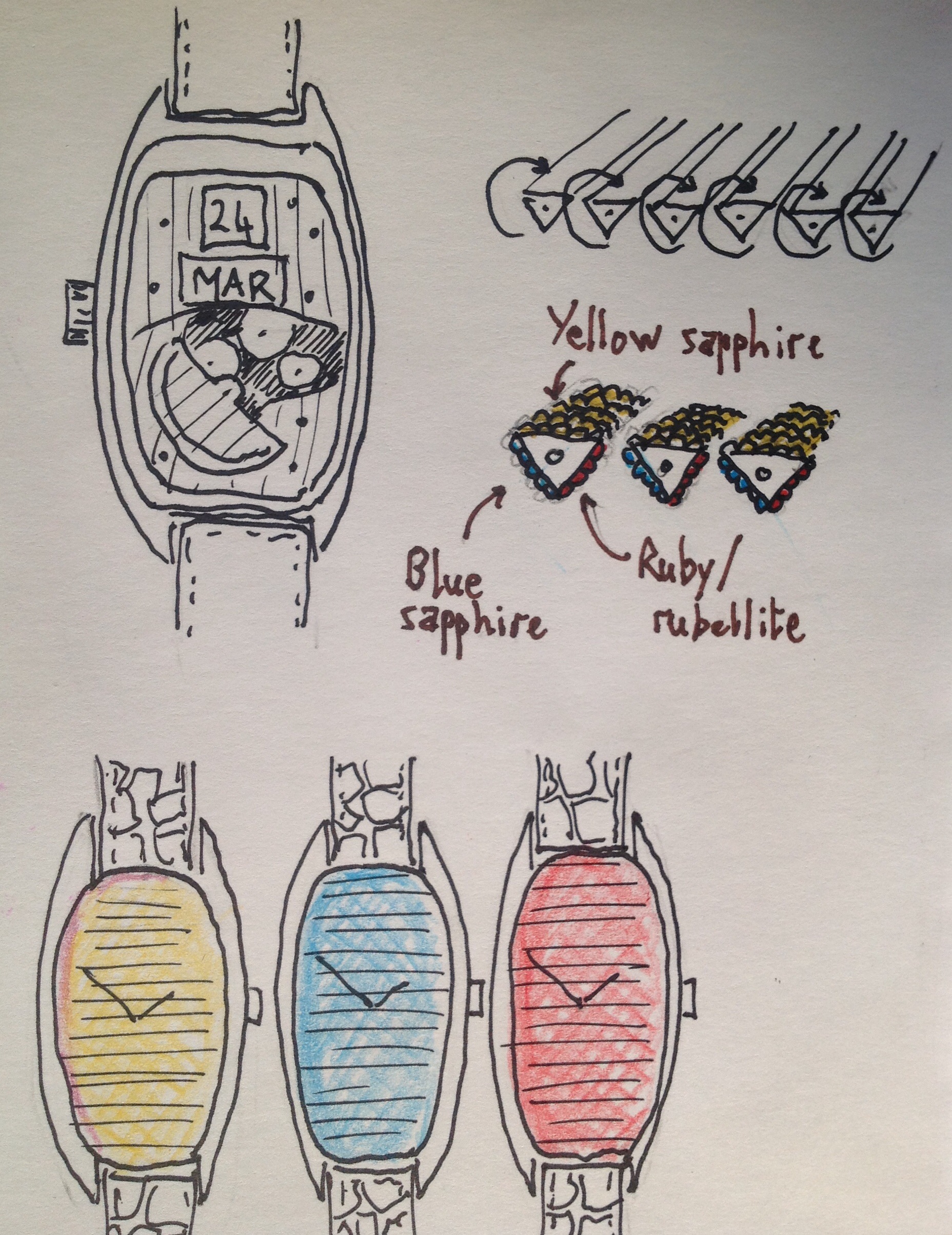