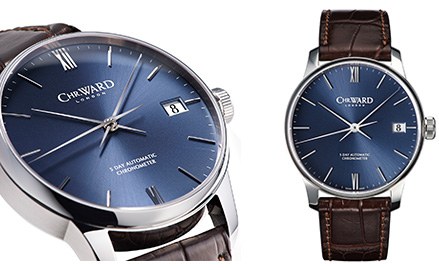 Christopher Ward is a brand about people, and their ambitions and ideas. Founded in a boat on the River Thames in 2004, by Chris Ward, Mike France and Peter Ellis, the concept was about making quality Swiss watches accessible to a large sector of the population. While Chris Ward had the watchmaking expertise, Mike France and Peter Ellis had the retail expertise that led to a seamless online sales process and a clever use of online media, working with blogs, video and forums. These techniques enable them to reduce the cost of marketing so that the prices of their watches reflect manufacturing costs and not the costs of advertising, testimonials and so forth.

Johannes Jahnke is the watchmaker at Synergies Horlogères who designed the SH21 movement used in the C9 Harrison 5 Day Automatic. Just 31 (2014), he was discovered by Jörg Bader, founder of Synergies Horlogères, seven years ago. Bader’s company has now merged with Christopher Ward, giving the brand the capacity to build its own movements as it wishes. This doesn’t mean that they make all the components, but they tailor and assemble parts from a number of Swiss suppliers.

Jörg Bader has 30 years of experience in the watchmaking business, and designed a new deployant clasp, the Bader buckle, that features in the C9 Harrison 5 Day Automatic. Bader himself says, “Compared to the ubiquitous butterfly clasp, his Bader buckle is simpler, less fiddly for sizing the leather strap and it ensures that it is leather rather than steel the wearer feels against his or her skin.” The Bader deployant is opened by pressing pushers on each side of the clasp.

Another person starring in this story and appearing in the watch’s name is John Harrison, the British clockmaker who invented the marine chronometer, making it possible to determine longitude during a ship’s passage. Christopher Ward thus pays tribute to the brilliance of his predecessor.

The major feature of the SH21 movement is the fact that it provides 5 days, 120 hours, power reserve. This is because it has double mainspring barrels. The movement operates at 4 Hertz, which ensures precision, and the SH21 movement is COSC chronometer certified. The rotor, visible through the sapphire caseback, is in tungsten, but resembles the rest of the metal components, with a brushed finish and bevelled edges. Screws are finished in steel colour, rather than blued, reflecting British rather than Swiss watchmaking tradition.

The watch itself has a sharp, minimalist beauty created by the needle-like hands that contrast with the sunburst blue dial, the slender baton hour markers, and the 12 and 6-hour markers in Roman numerals. Seen from above, the bezel is very narrow, giving importance to the dial. Then there is the contrast between the satin and polished steel on the case, the relief-moulded crown with the Christopher Ward logo, and the fine Louisiana alligator strap. The case diameter is 43 mm, and it’s a thick watch at 13.45 mm, so not a dress watch.

There is one other characteristic of Christopher Ward watches that I think is worth mentioning. The company has a well-developed ethical stance and uses alligator straps originating from managed farms signed up to a UN certification scheme.

The watch is priced at £1,500. You can view and purchase Christopher Ward watches online at http://www.christopherward.co.uk/ 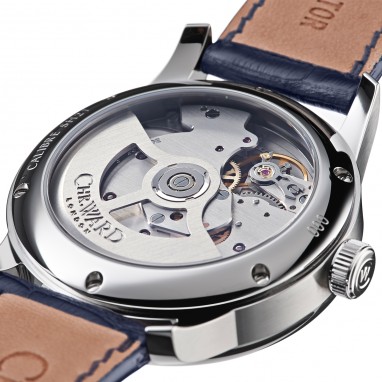 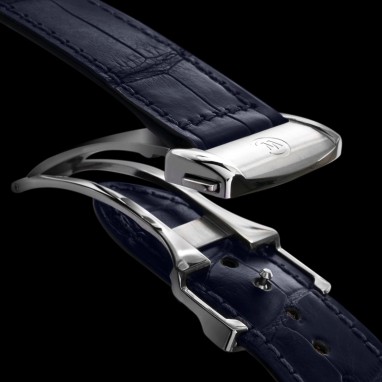 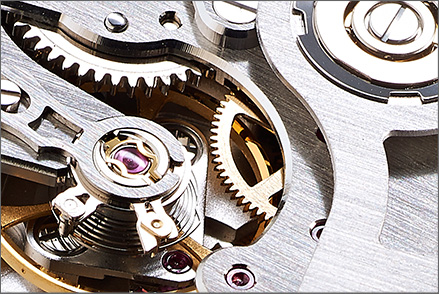 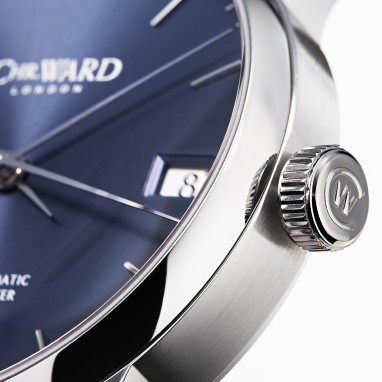 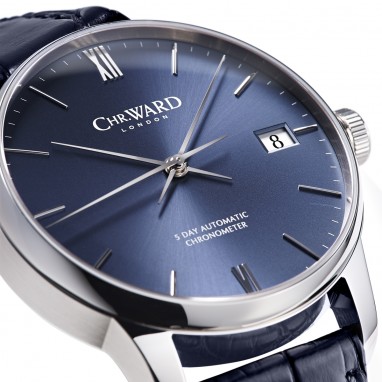