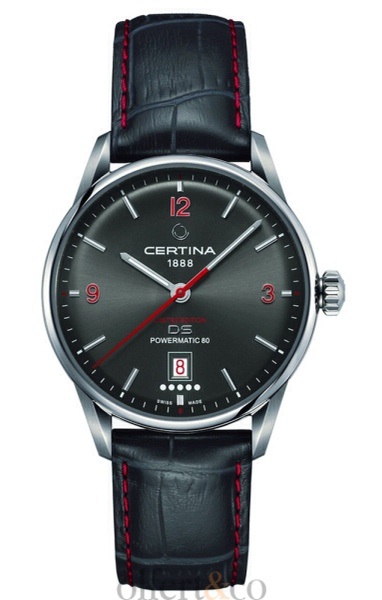 A watch by Certina

In this article I will try to explain how a mechanical watch works. Why? Just because I am fascinated by these objects which may seem completely useless because even the most expensive high-end watch will be less accurate than a 40-euro quartz watch. But for centuries, mechanical clocks and watches were the only method of measuring time, and they became fundamentally important in sea trade, helping navigators calculate their longitude position and thus reaching land at the right point, a safe haven and not a desolate rocky coast.

Today’s watch industry is built on this heritage of micro-engineering, and the undying fascination of mechanical timepieces is proven by the remarkable success of traditional watch companies. It is their products that caught my imagination and transformed me into a watch journalist. And so I have tried to understand their basic functioning. Here is a very simplified overview.

A mechanical watch measures the passage of time by means of harnessing the rhythm of an oscillating device. In many early clocks, the oscillation took the form of a pendulum, whose frequency stays the same however little or far it swings, and depends just on its length. In watches, the oscillator is a tiny wheel, the balance wheel, linked to a spiral spring, so that the wheel rotates first in one direction, then the other, at a constant frequency. 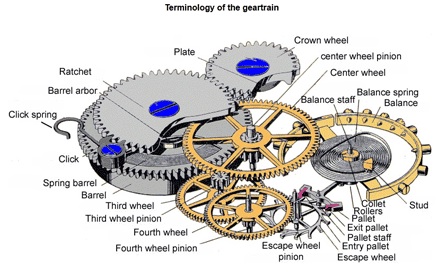 Let’s look at the process step by step, starting from the power source. The spiral mainspring is housed in a flat cylindrical barrel, with the outer extremity of the mainspring attached to the barrel. The inner extremity of the mainspring is attached to a shaft, which can be rotated by turning the crown outside the watchcase, thus winding the spring. The barrel itself forms a gear wheel (usually called simply “wheel”), forming the first wheel of the gear train. It drives the second wheel, called the centre wheel, to which is attached the minute hand, rotating once every hour. The centre wheel also drives the hour hand by means of a 12:1 reducing gear.

The time can be adjusted by pulling out the crown. The stem (axle) of the crown is fitted with two rings of teeth, called the clutch or castle wheel. The first ring engages with the ratchet wheel on the stem to which the centre of the mainspring is attached. By pulling out the crown, this ring disengages, while the second ring engages with a gear that turns the minute wheel – the centre wheel. To set the time, the centre wheel has to be disengaged from the rest of the gear train. This is achieved by means of a small wheel on the shaft of the centre wheel, the cannon pinion. This is friction-fitted to the shaft, so that when the crown is rotated, the minutes hand can be moved, along with the hour hand linked to it by means of the 12:1 reduction gear. 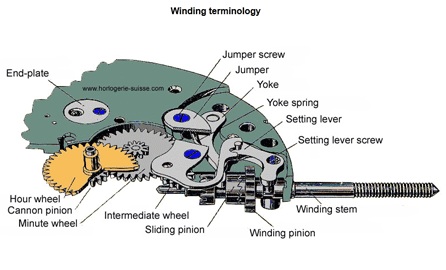 Complications
A simple movement displays the time in hours, minutes and seconds. Other additional functions are known as complications, and a “complication watch” is usually considered as one with at least three complications, one acoustic, one astronomical, and one chronological. Acoustic complications include functions such as an alarm, or a minute repeater (the latter dating back to times before SuperLuminova, when a repeater mechanism enabled the user to find out the time in the dark). Astronomical complications can be date functions, with calendars that take into account the different lengths of months or even years, and more mysterious functions such as equation of time and sidereal time.

The most frequently-built complication is the chronograph. The word literally translates as ‘time writer,’ and it does just that: from when the start button is pressed, it displays elapsed time on a series of subdials.

Friction
One of the primary considerations in watch design is how to reduce friction. In theory, the power reserve of a wristwatch can be accurately determined, because the power from the mainspring is released one tiny increment at a time. In practice, because the mainspring’s tension gradually decreases as it unwinds, there comes a point when the total friction in the movement exceeds the force delivered by the mainspring, and the watch stops. One of the methods used to reduce friction is to use jewels made of synthetic ruby or sapphire (they were originally made from natural jewels). Traditionally the number of jewels provided an indication of the quality of a watch, which was why the number of jewels was often prominently indicated on the dial or movement.

One thought on “How does a watch work?”