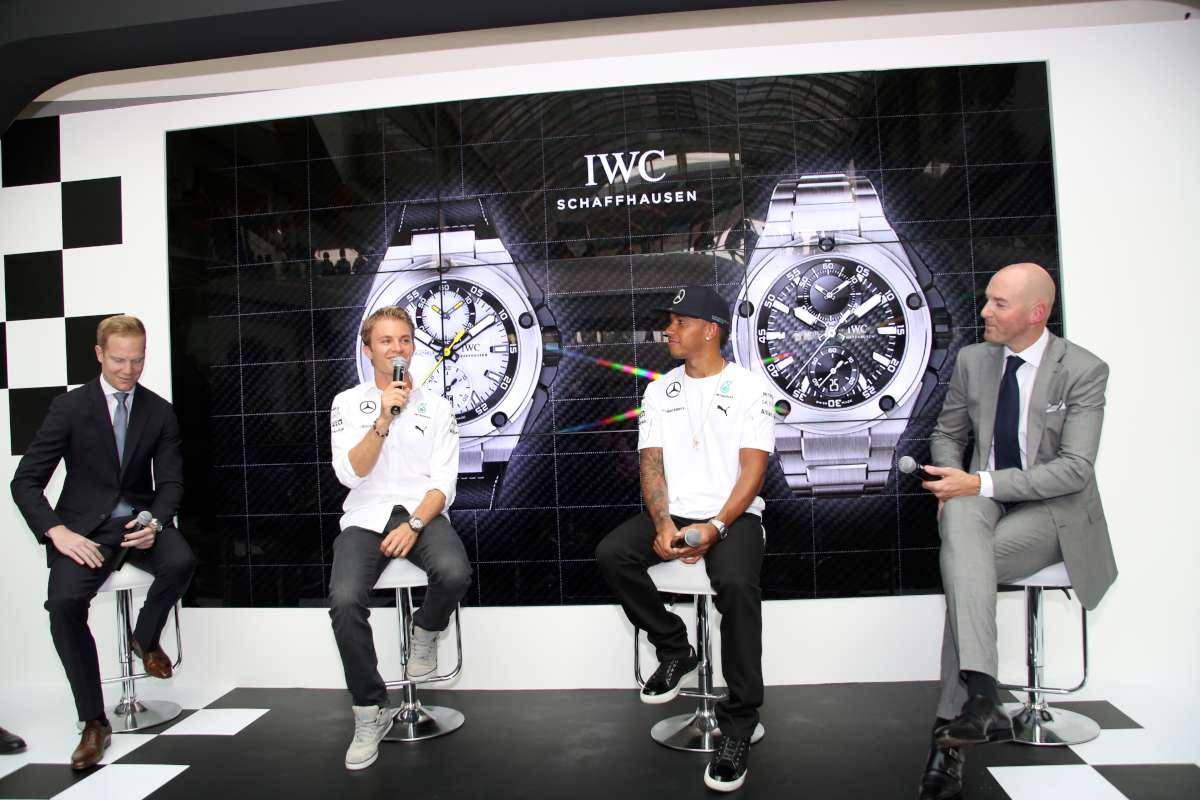 Not surprisingly, both watches are chronographs in the Ingenieur range, presented at the SIHH watch fair in January 2013 with a stand that looked like a Formula One pitstop and design studio. Both watches, variants of the Ingenieur Chronograph racer reference 3785, are in titanium, powered by the Calibre 89361 movement. Chronograph hours and minutes are shown by two hands on the upper subdial, an arrangement that could be used as a second timezone, just by leaving the chronograph running. The movement offers the flyack function, small seconds on the lower subdial that can be stopped for precision adjustment (hacking seconds), and date display. Both watches have a medallion of carbon fibre from one of the cars used by the Mercedes AMG Petronas team, set into the titanium caseback. The medallion is protected by a sapphire glass caseback with the logo of Nico or Lewis. The two drivers participated in the design process, working with Christian Knoop, Creative Director at IWC Schaffhausen. 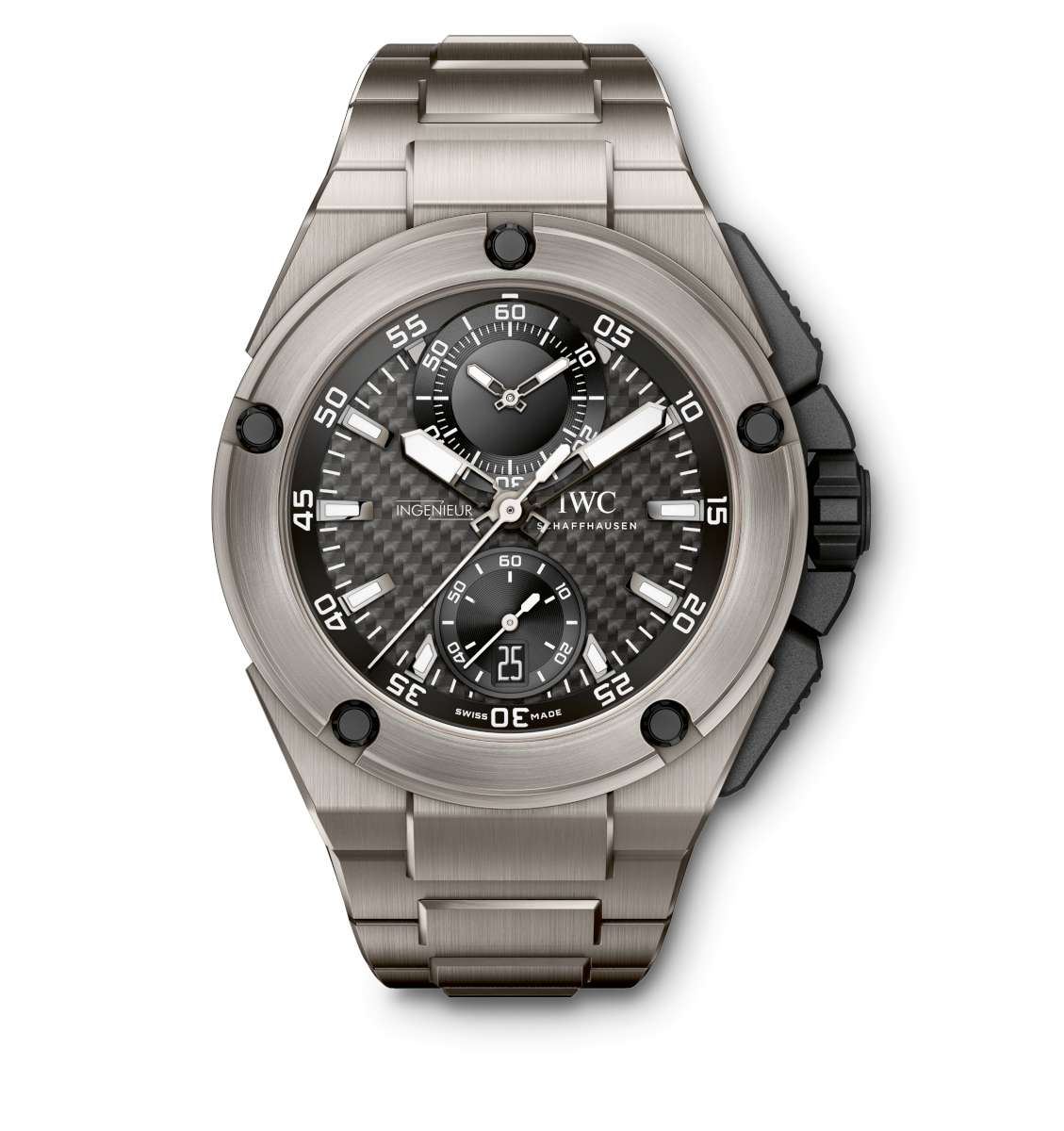 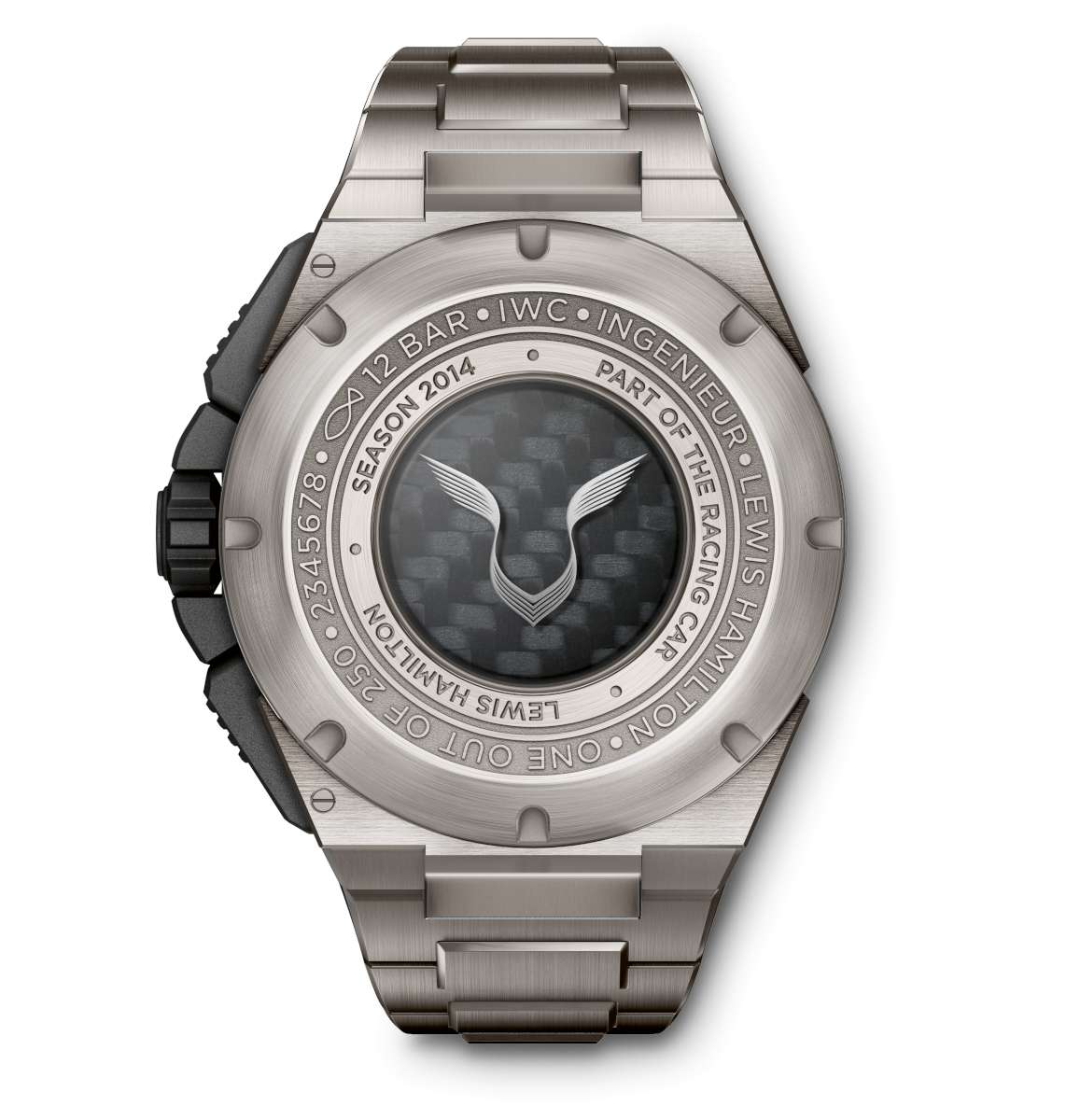 Lewis Hamilton’s Ingenieur watch, caseback with medallion of carbon from a racing car, under a sapphire caseback with the driver’s logo

Nico Rosberg’s watch (IW379603) has a silver-plated dial, a titanium case, and a rubber strap. The chronograph hands are yellow, a reference to the driver’s trademark neon yellow helmet. The price of this watch is US$14,300. 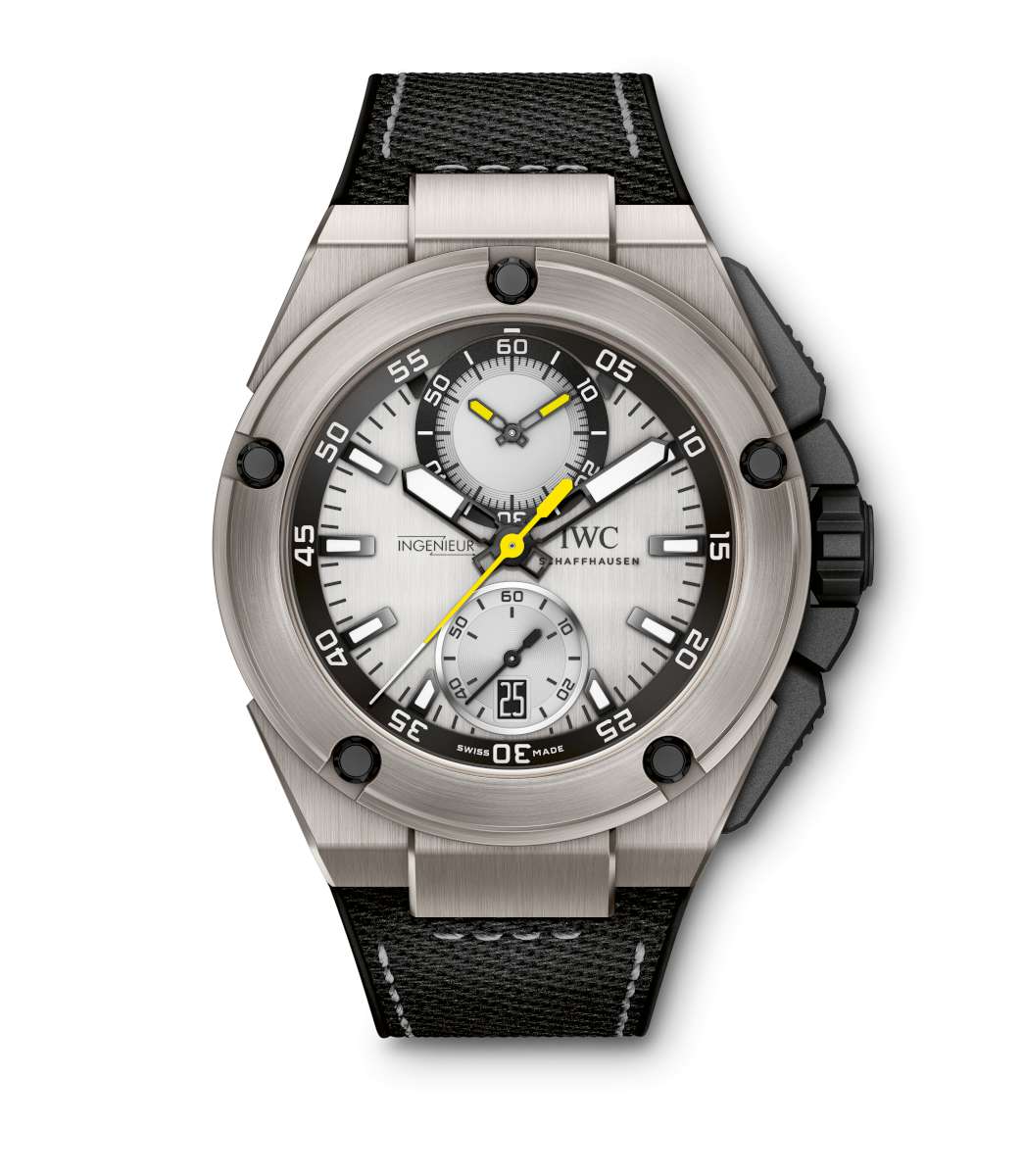 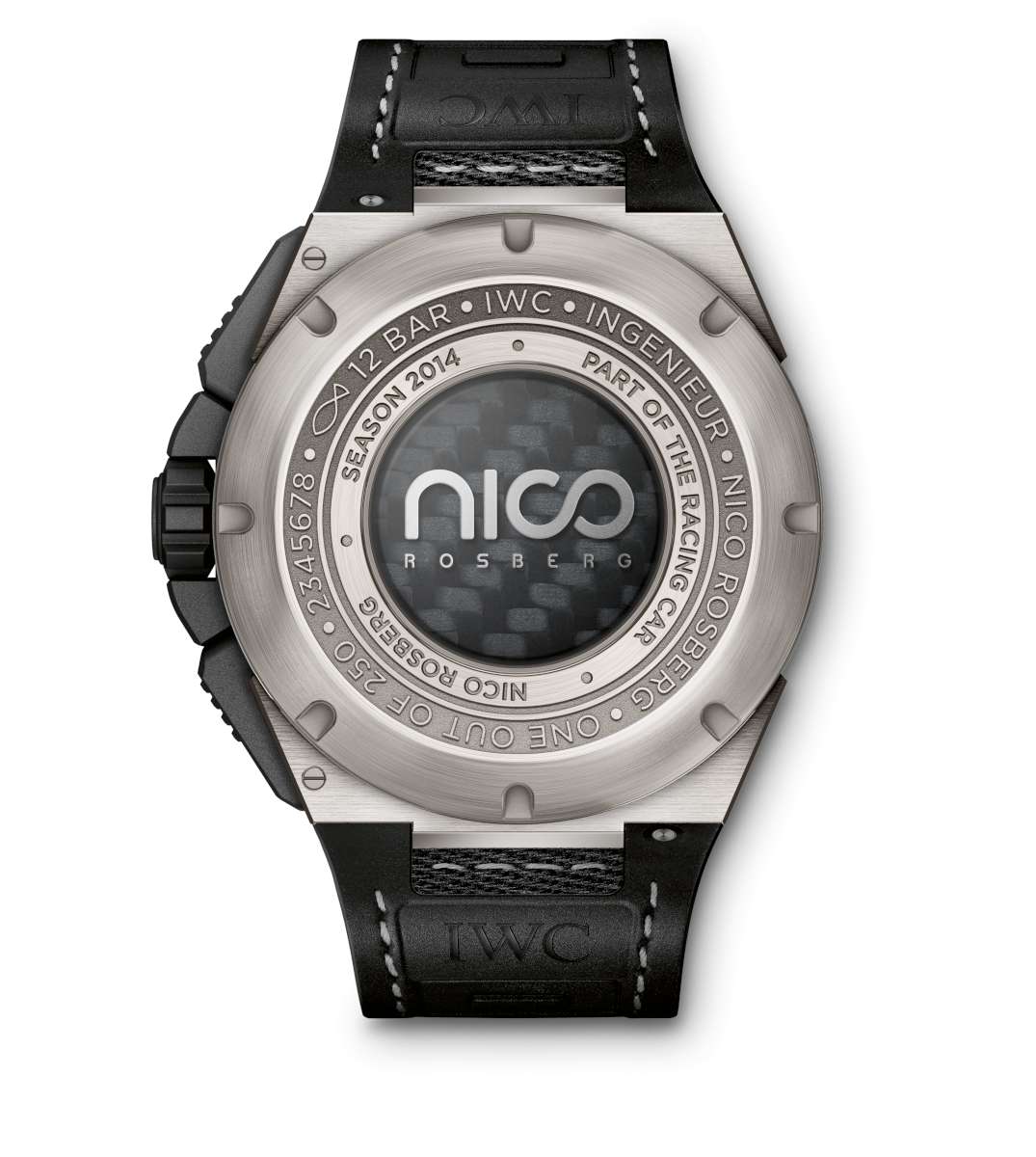 Nico Rosberg’s Ingenieur watch, reverse, with medallion of carbon from a racing car, under a sapphire caseback with the driver’s logo

Valentino Rossi
TW Steel, a watch brand founded in Amsterdam in 2005, has launched the VR|46 Yamaha Factory Racing by TW Steel collection. VR|46 is a brand created by motorcycling champion Valentino Rossi, and the VR|46 Yamaha Factory Racing collection comprises three models, two Pilot models, TW935 (45mm) and TW936 (48mm), and a Tech edition, TW937 (48mm). Another six watches, VR1-VR6, are priced at €99. They all have Miyota quartz movements made by Citizen. 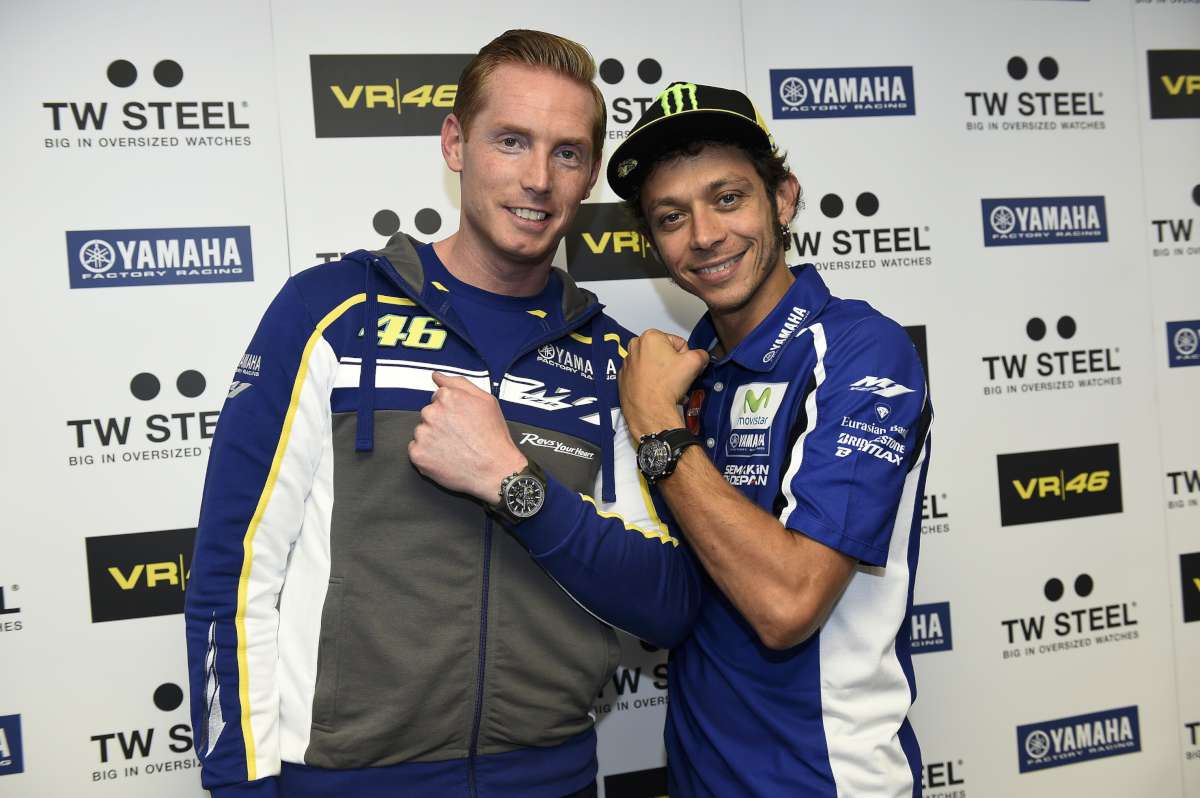 TW Steel CEO and co-owner, Jordy Cobelens, with Valentino Rossi, at the presentation of the new watches

The two Pilot models, TW935 (45mm, €379) and TW936 (48mm, €399), have a steel case with PVD dark titanium coating, housing a Miyota 6S20 quartz movement with black date disc. There are blue accents on the dial, and a yellow 46 in one of the chronograph subdials. The watches have dark grey silicon straps
with VR|46 logo.

The Tech model, TW937 (48mm, €799), has a steel case with sandblasted PVD black coating, shock-absorber-like pillars on the case side, and a carbon fibre dial. The movement is the Miyota 6S20 quartz. The 6S20 provides battery life of about 4 years. It drives three subdials, at 3 oclock for 1/20th seconds, at 6 o’clock for continuous seconds, at 9 o’clock for chronograph minutes. Chronograph seconds are measured by the central sweep hand. 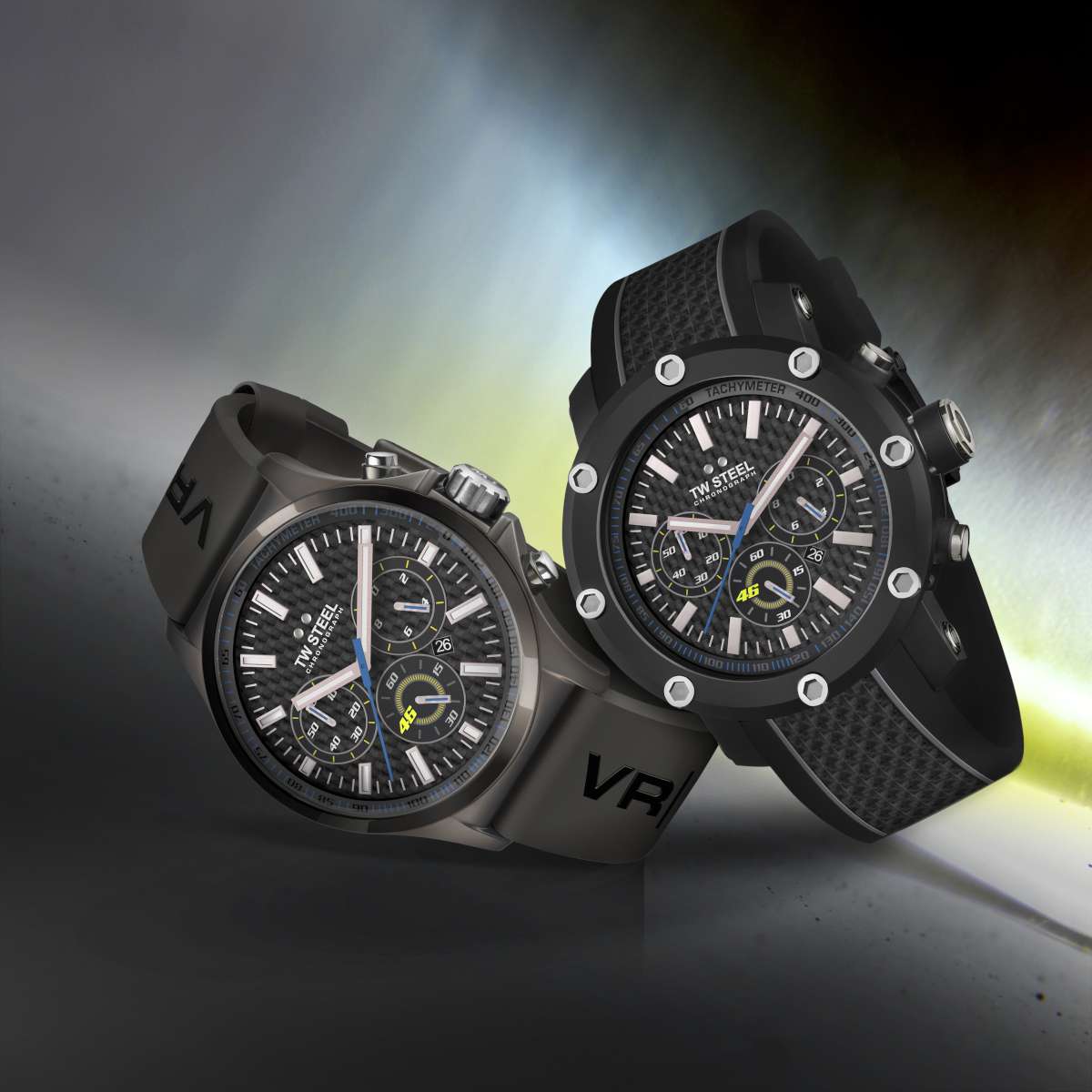 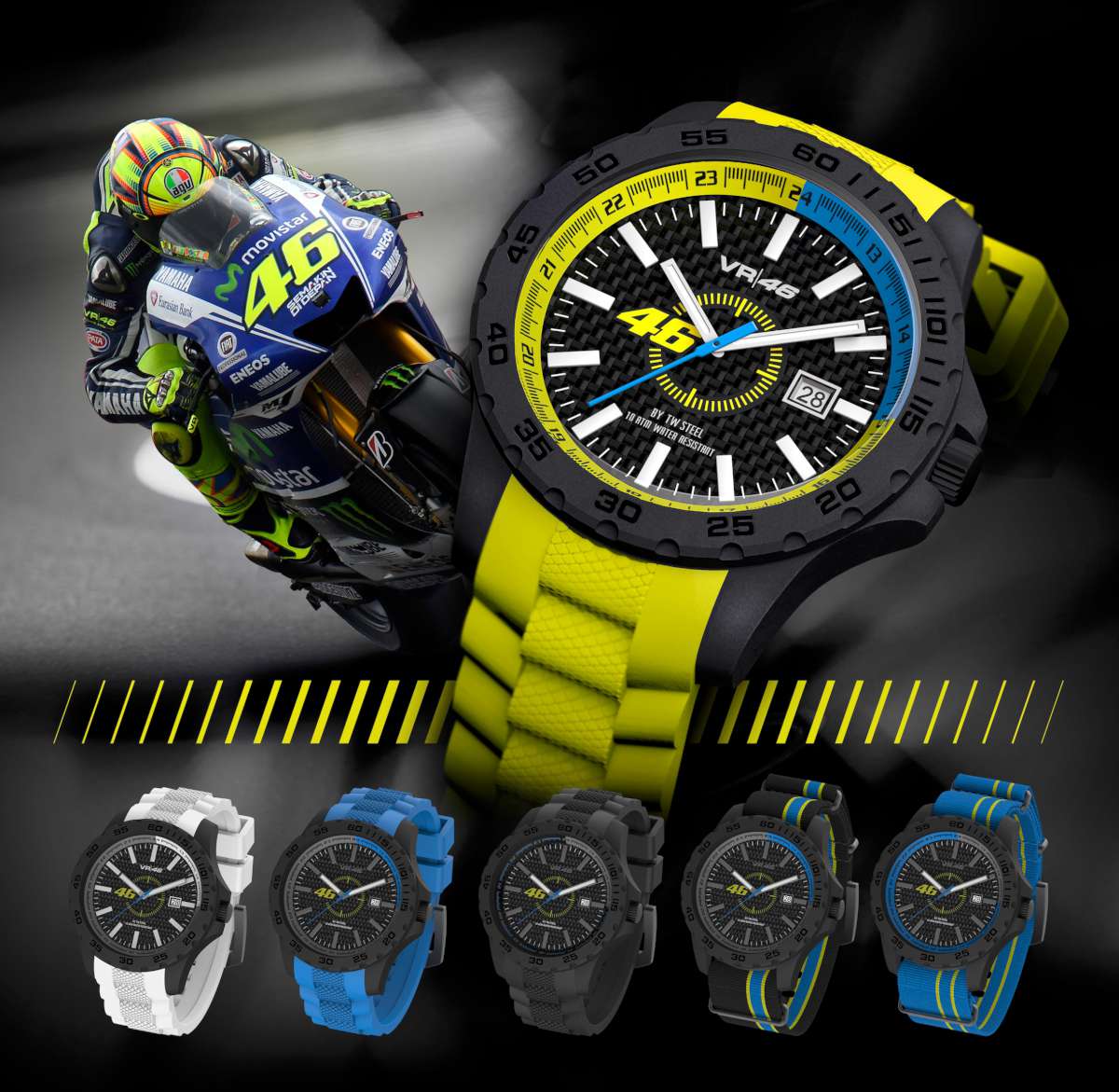 Find out more and pre-order from www.yamahavr46watches.com

de Grisogono
de Grisogono on the other hand is sponsoring not a driver, but the FIA FormulaE Championship, a new series for electric racing cars. The brand supplies the trophies and include the typical de Grisogono arabesque motif. The first race was held at the Bird Nest stadium in Beijing, and won by Lucas di Grassi driving for Audi Sport ABT. The next ePrix will take place in Putrajaya in Malaysia on 22 November 2014. 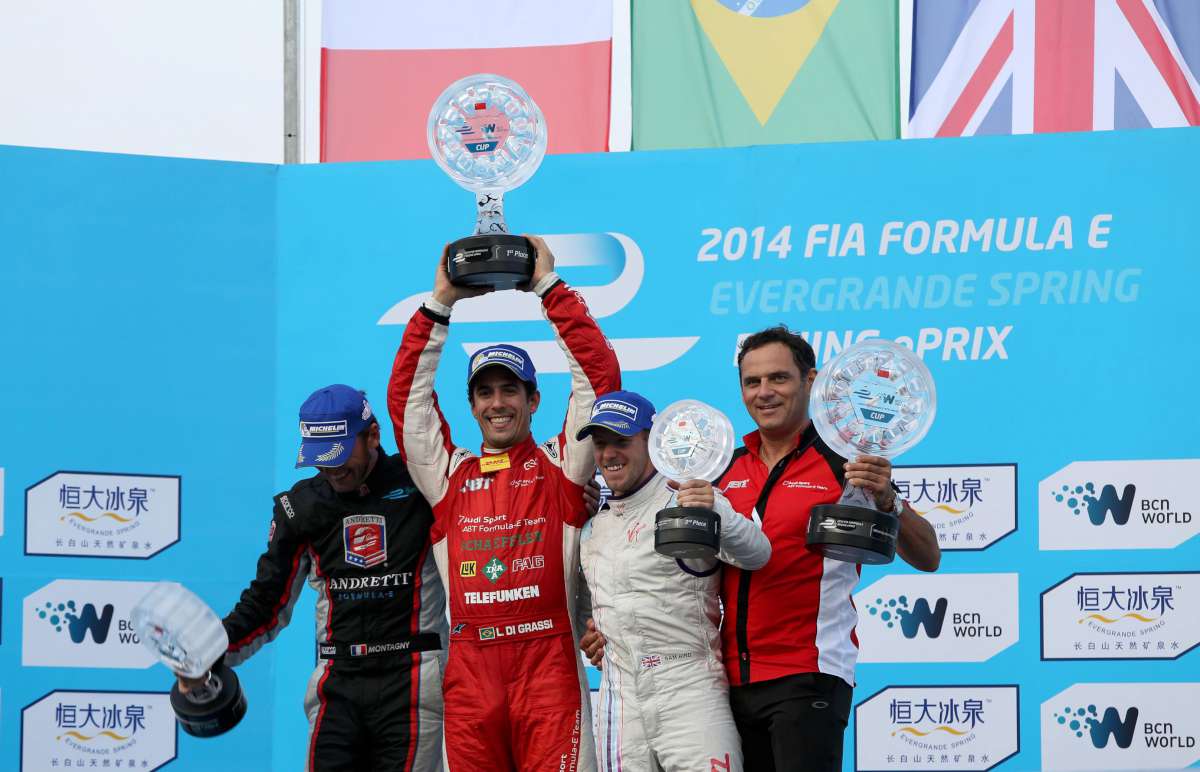 Lucas di Grassi, winner of the first FormulaE race in Beijing, with Franck Montagny and
Sam Bird, and the trophy created by de Grisogono 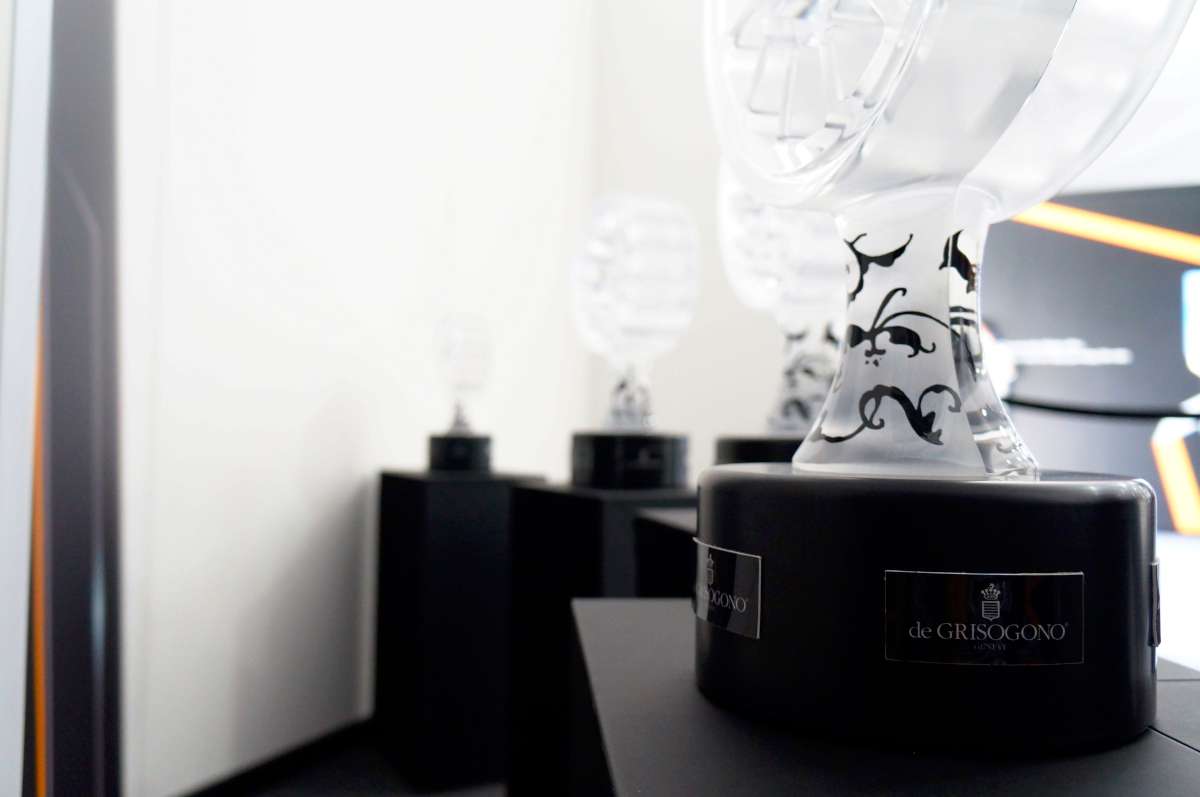 Detail of the trophy