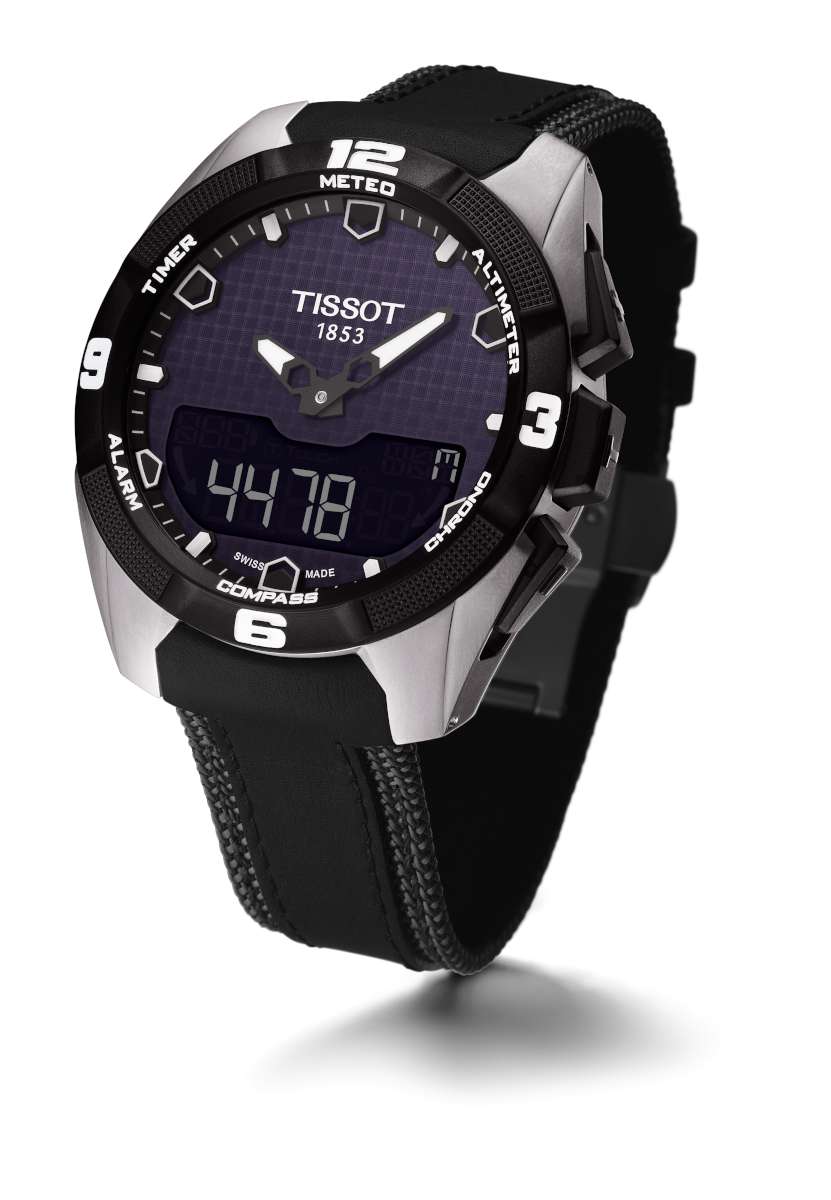 Today is 26 September 2014, which means we’re nearly there, nearly at the fourth quarter of the year. For the watch industry, the fourth quarter is very important, because it ends with the gift-giving season, and so it’s a time of year when watch brands want to stay very close to the market, introducing new models or variants of existing pieces.

Tissot recently presented a new watch that represents the end-point of a lot of research. As the company president Francois Thiébaud said, “Time is something that cannot be changed, but we are addressing time to make its passage more beautiful, in products that can breathe time. For Tissot, innovation is important; we have to respect traditions, our family values, and Tissot has been innovating since 1855.”

Tissot has been working on tactile technology long before iPhones, iPads and now the Apple Watch. Tissot’s first tactile watch T-Touch was launched in 1999, and today, in September 2014, it has presented the T-Touch Expert Solar, the first watch to combine tactile technology – in which buttons are replaced by sensitive areas on the watch glass – with solar power. Not only does the sunlight enable the hour indexes and hands to glow in the dark, but it also charges an accumulator so that in theory the watch will keep going forever. In practice, the accumulator will have to be changed after ten years, but even so, when compared with a mechanical watch which has a power reserve of from about 40 hours up to say 120 hours, or a quartz watch for which the power reserve goes up to a couple of years, a solar watch could easily have a power reserve of a decade.

The accumulator of the T-Touch Expert Solar reaches full charge after one week exposure to the sun. After that, the watch will carry on working for a year even in complete darkness.

When you embrace electronics, you may as well utilize all the possibilities that it offers, and Tissot have done exactly this. The T-Touch Expert Solar provides time, perpetual calendar, two alarms (one for work days, one for the weekend), two time zones, temperature, atmospheric pressure and weather, altimeter that also records changes in height, chronograph with lap times and split time, including a logbook function, a compass, regatta countdown function, backlit dial indications for night-time visibility, and azimuth, a function in which you set a bearing to be followed, and the watch indicates the direction to follow. The functions are accessed through areas of touch-sensitive glass on the dial, indicated by labels around the bezel. Touch-sensitivity is first activated by a one-second press on a button at 3 o’clock. The position of the different functions is shown clearly by a series of labels placed around the bezel. The watch also has an indicator showing the battery charge. The case is in black PVD-treated titanium, rated waterproof to 100 metres depth. The strap is in rubber or leather, or a titanium bracelet. The various strap versions available include an attractive orange rubber option.

The functions make it a watch ideal for people engaged in active sports like running, orienteering, cycling, mountaineering, sailing, paragliding and so forth. Even though it has a high water resistance, it is not intended as a diving watch, partly because touch-sensitivity doesn’t work if the glass is wet.

Rado is another brand that works with tactile technology, applied to ceramics. Read a post about Rado here. 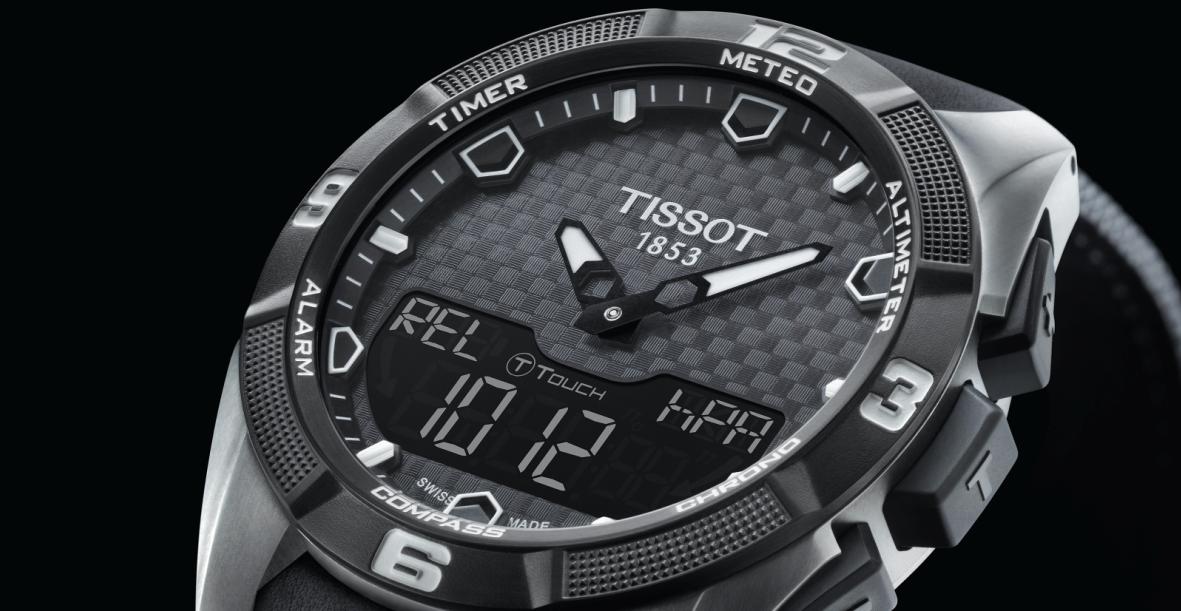 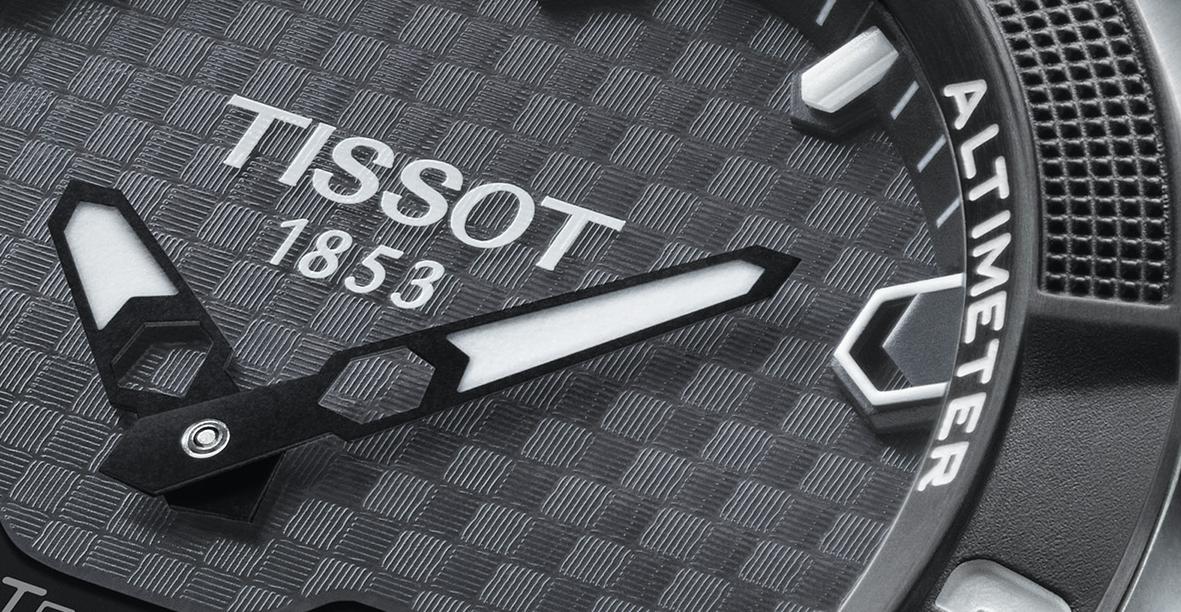 Detail of the dial with solar panel 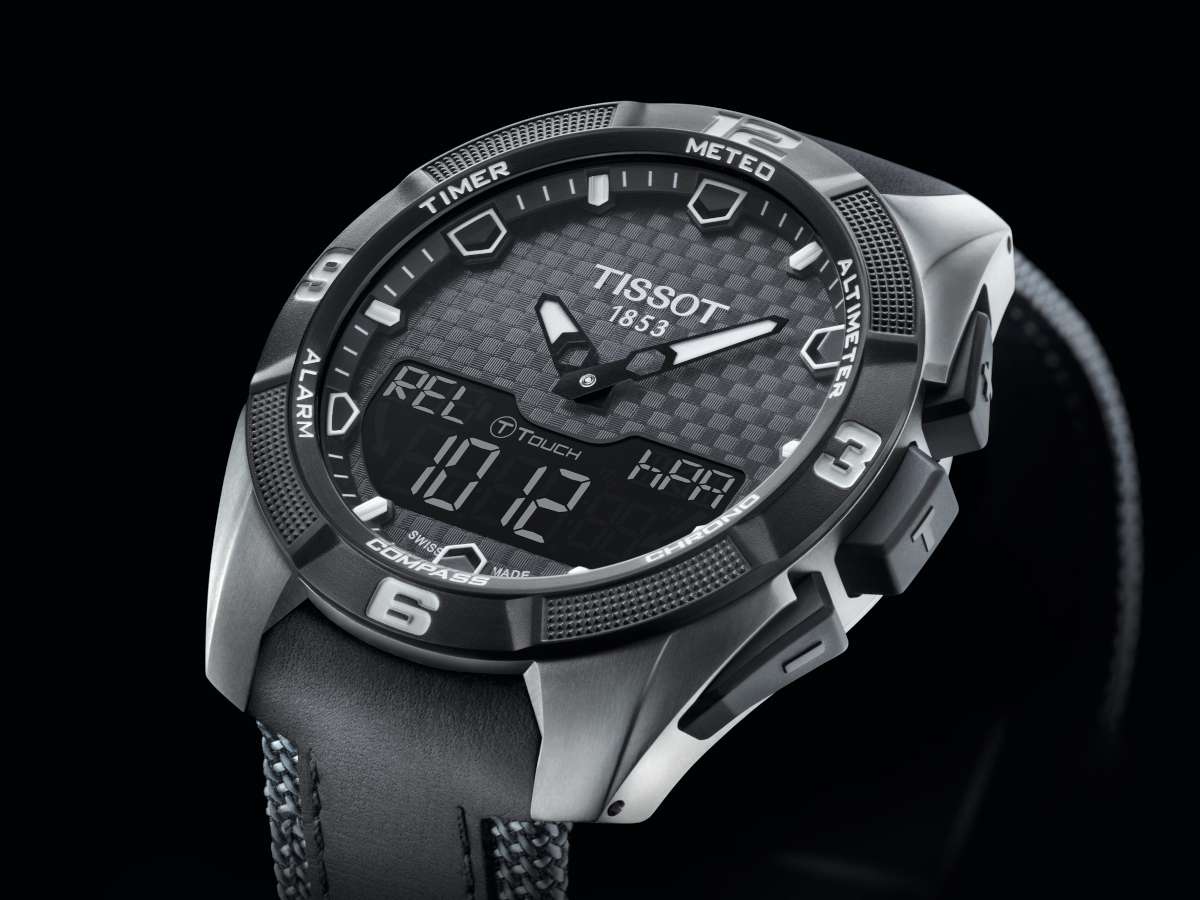 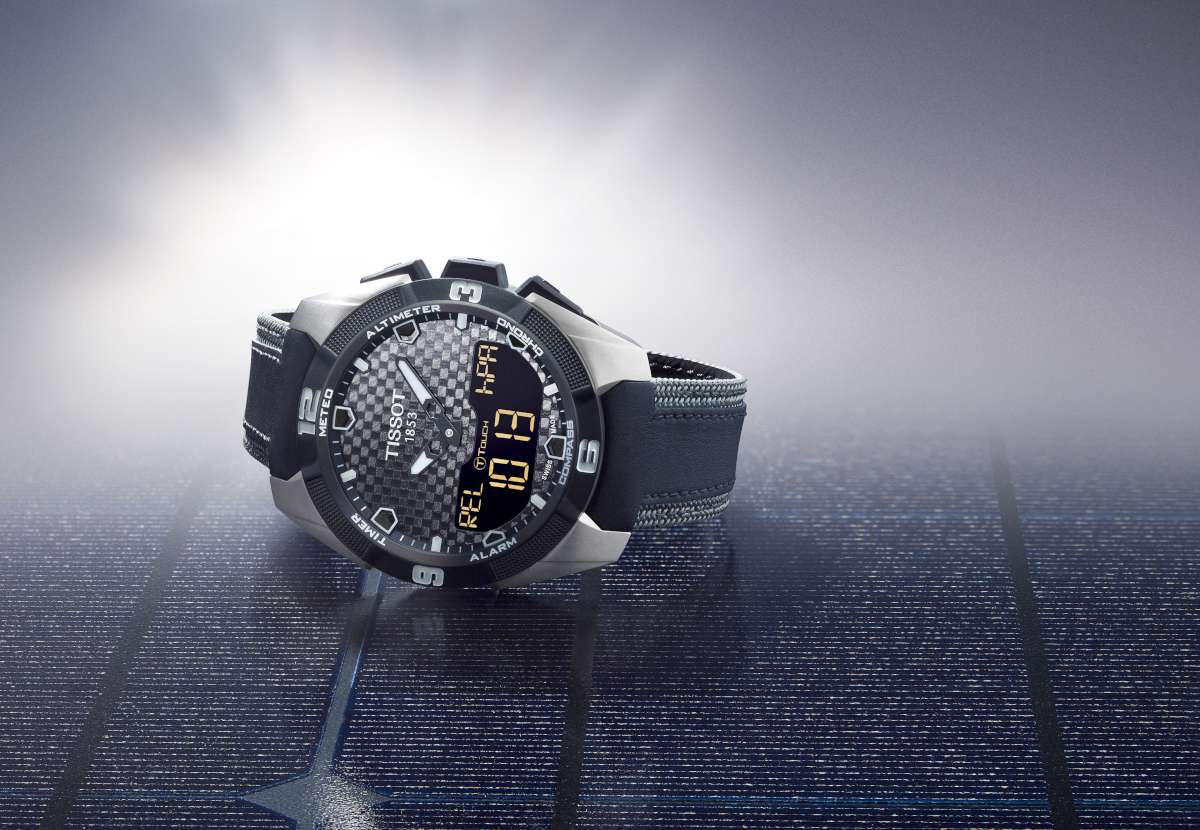 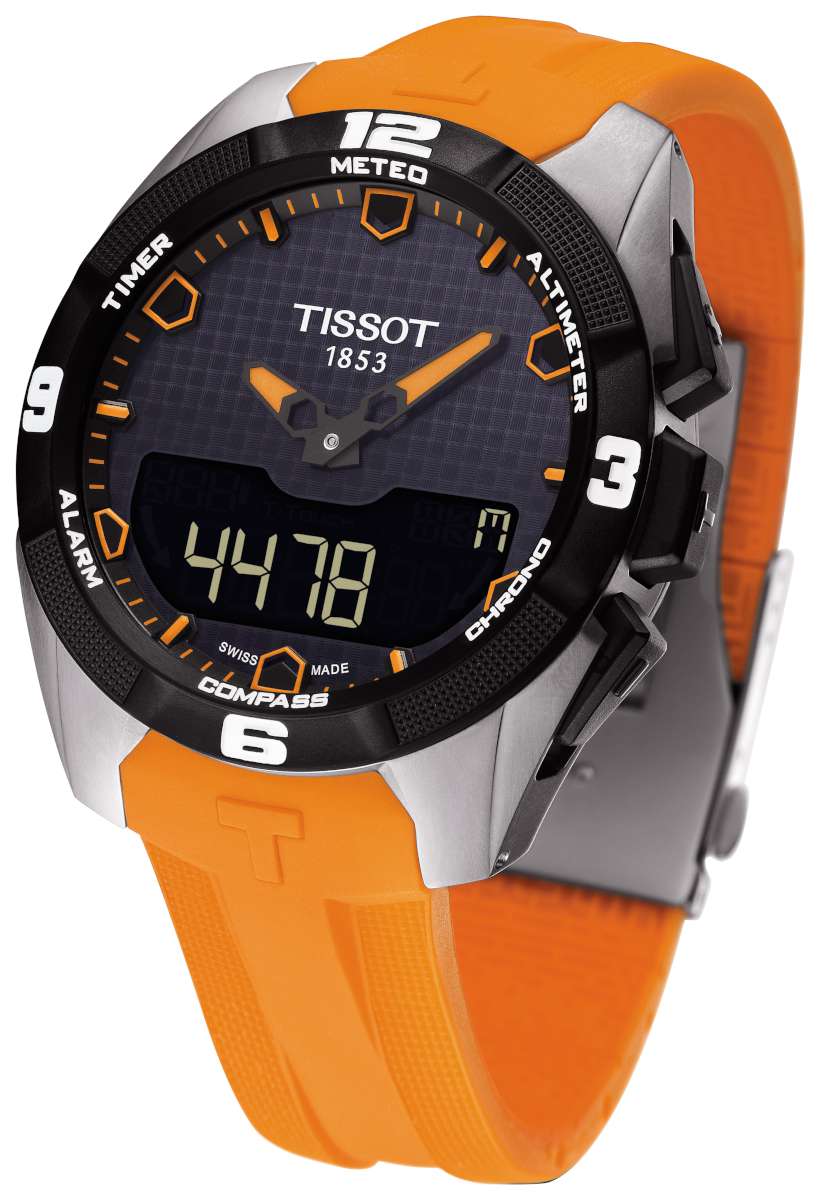