The Bugatti Veyron costs about $1.9 million, and so the co-branded watch made by Parmigiani Fleurier has to have an adequate price. The Bugatti Super Sport by Parmigiani Fleurier is priced at 285,000 Swiss francs before tax, and it is now available in a limited-edition red gold version. Just 30 pieces, available from now up until Christmas. The design of the watch has not changed: it shows the time on a small face that is visible when you have your hands on the steering wheel. To achieve this, the specially designed Calibre Parmigiani 372 movement is tilted upwards but in any case is at 90° with respect to the watch face. The 90° rotation is achieved by means of a conical gear train. This unusual design dates back to 2004, when Michel Parmigiani and his team designed the Type 370 movement with a transversal axis, later improved in 2010 with the Bugatti PF 372 which launched the concept of the vertical watch face, perpendicular to the movement. This idea was by Bastien Leuba, then a student at the watchmaking school in Le Locle.

The appearance of the watch combines elements of the Veyron, such as the “Bugatti oval” of the watch face, the gear train wheels cut to resemble car wheels, and the supercar’s massive air intakes, together with characteristic Parmigiani Fleurier features such as the lateral profile which is simply a larger version of the brand’s signature lug, whose geometry is generated by the Fibonacci series and therefore the Golden Mean.

On the top surface of the watch, there is a circular power reserve indicator: the manually-wound movement will run for 10 days after it has been fully wound, by virtue of the two barrels coupled in series. The case is large at 36 mm wide, 50 mm high and almost 16 mm thick, with sapphire windows on just about all surfaces to provide views of the movement. The balance is fully in view on the top. The watch is mounted on a Hermès strap in indigo blue colour. The Bugatti logo appears in blue on the watch face at 8 o’clock, while the Parmigiani Fleurier name is very small at 12 o’clock, with the logo on the crown. 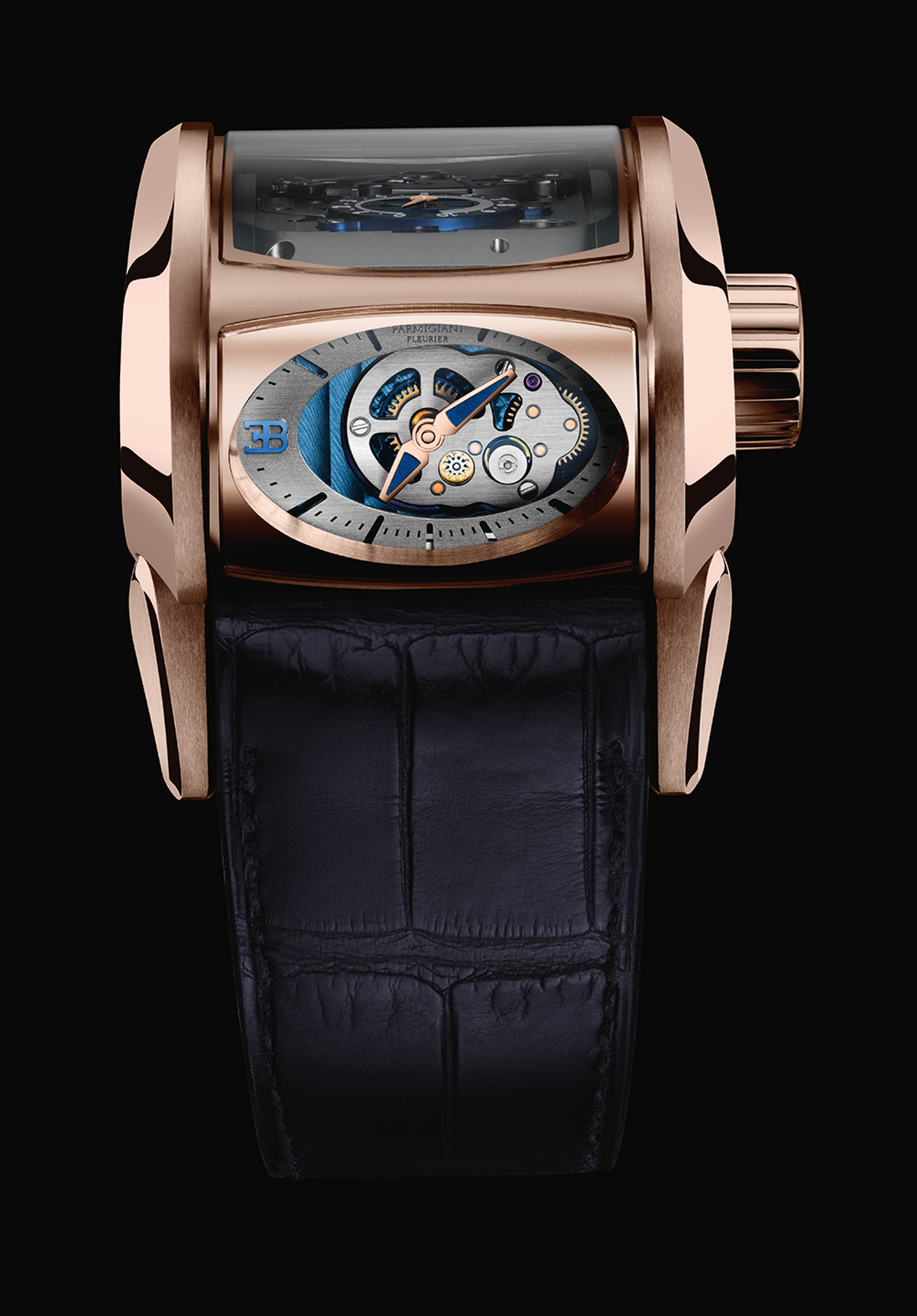 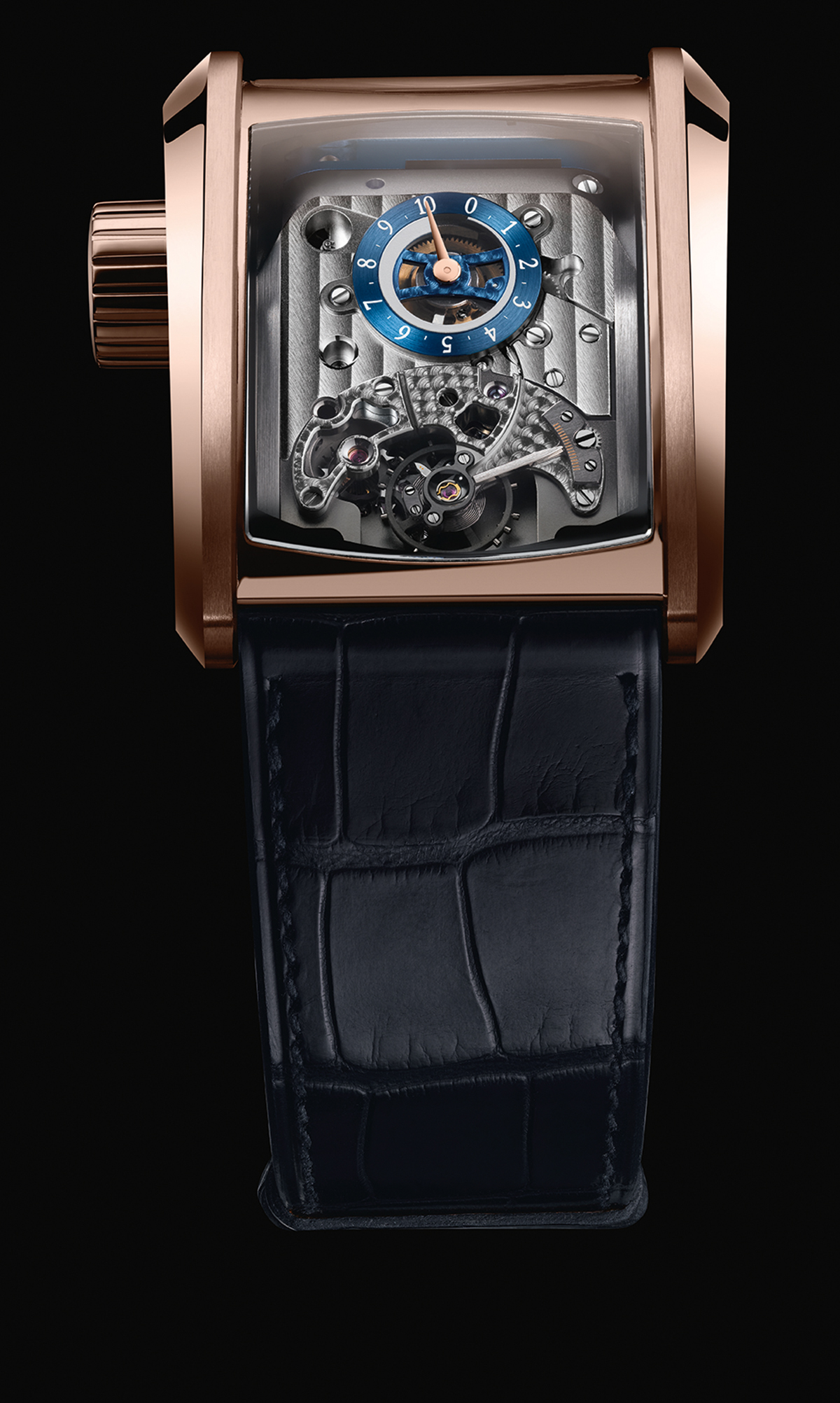 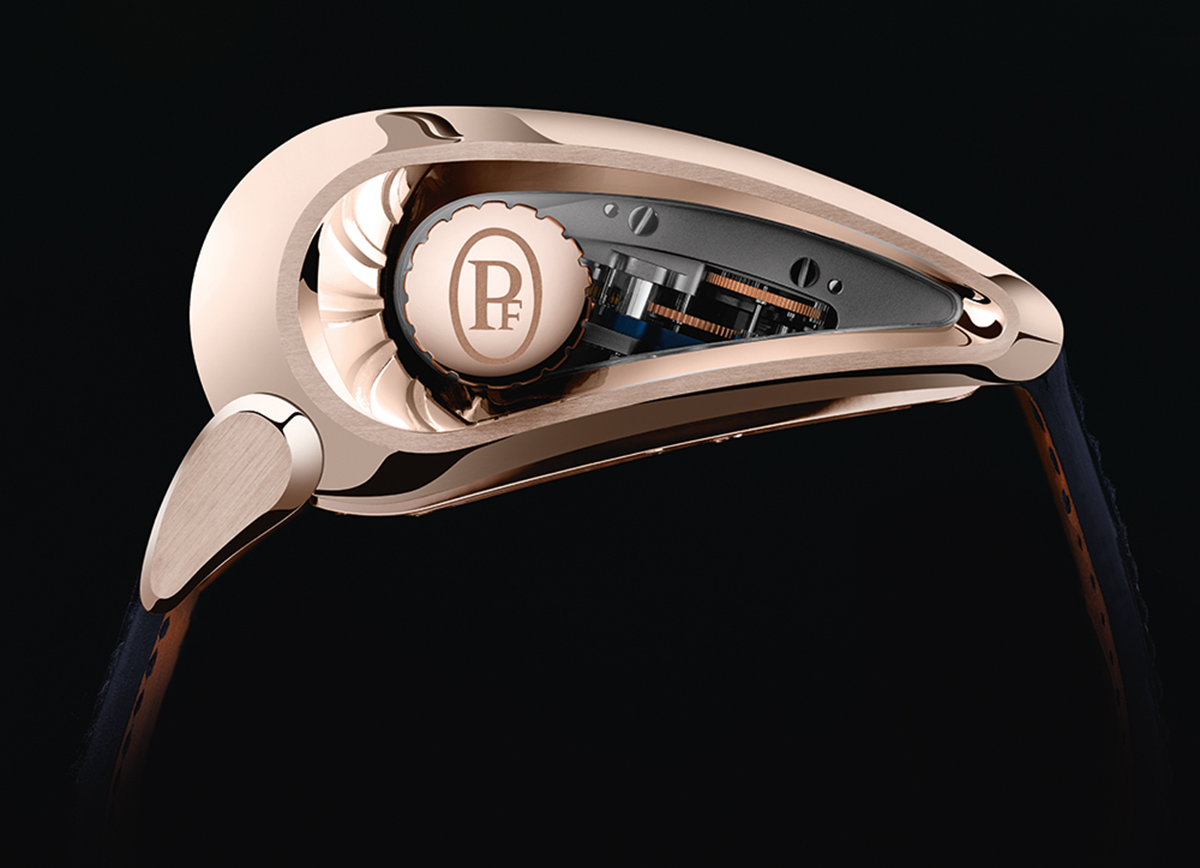 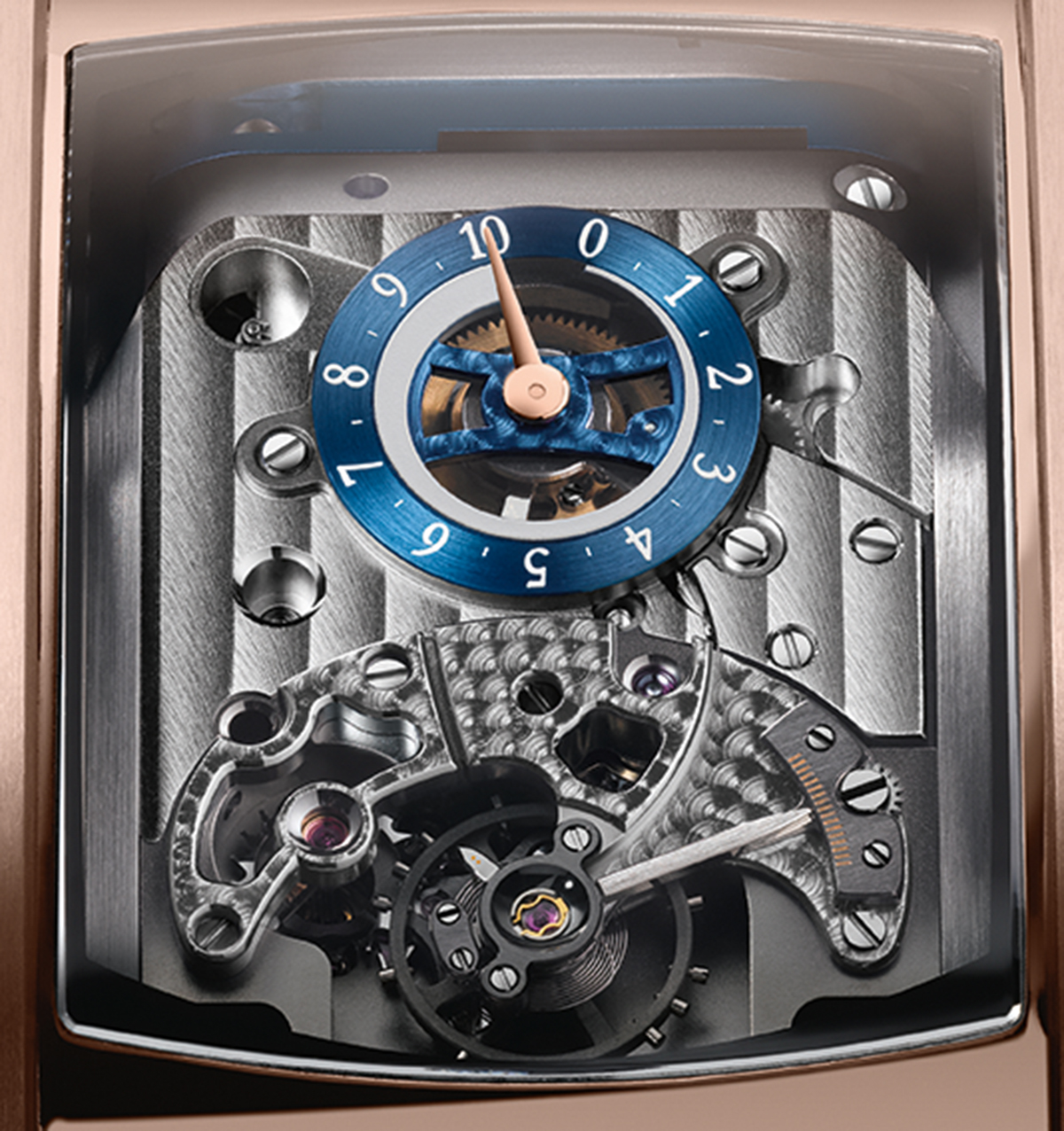 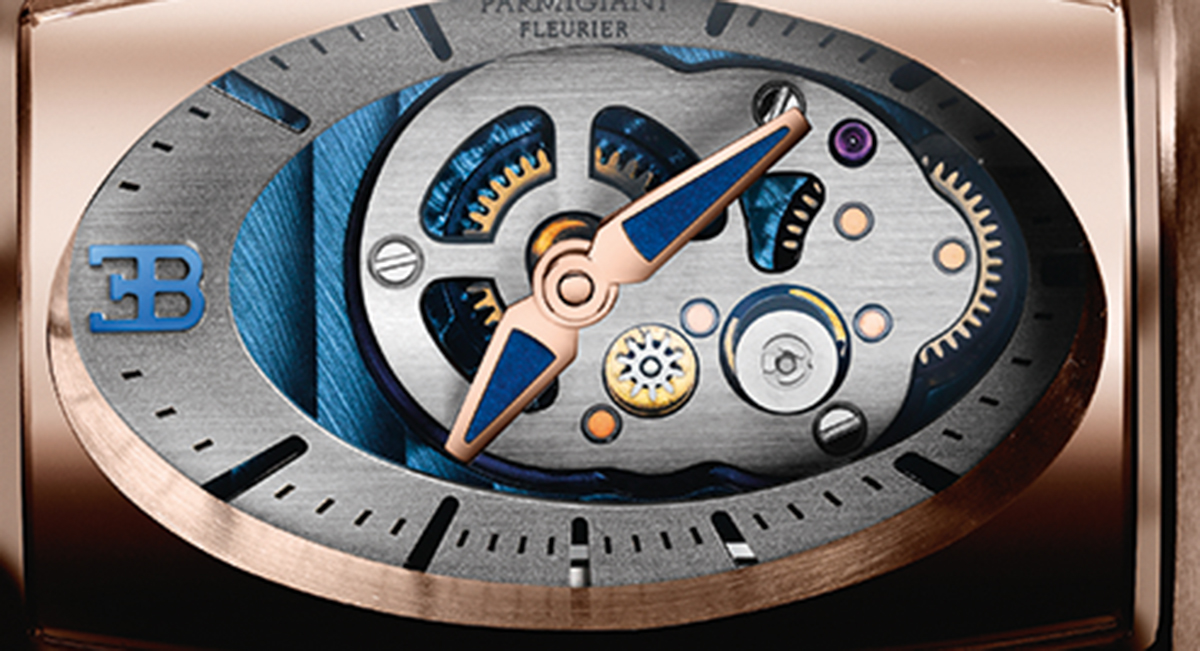 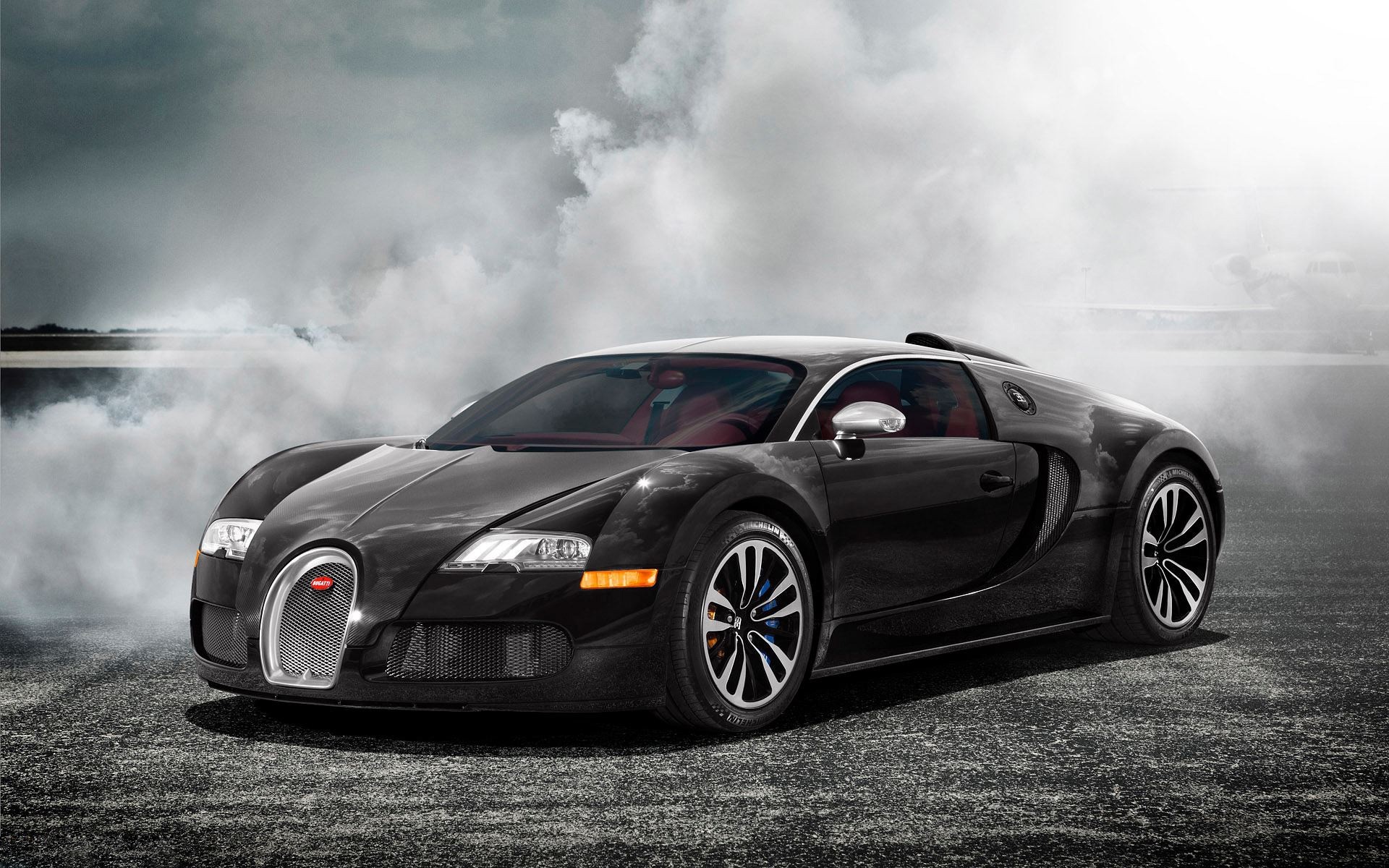 The Bugatti Veyron, courtesy of hdcarwallpapers.com 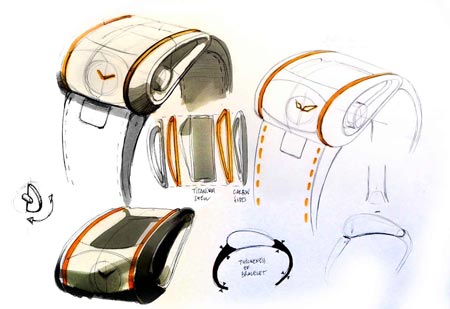