Patek Philippe’s collection of watches made to celebrate their 175th anniversary this year includes a very complicated watch, which includes some world firsts. It is the the Patek Philippe Grandmaster Chime, reference 5175R-001, in rose gold, Patek Philippe’s most complicated wristwatch with 1,366 components, and one of the most complex in the world, in a league with the Franck Muller Aeternitas Mega 4 (36 complications, 1,483 components, a 1,000-year calendar) and the Jaeger-LeCoultre Hybris Mechanica Grande Sonnerie (27 complications, about 1,300 components).

One the most disctinctive features of the Grandmaster Chime is the fact that it rotates through 360 degrees on its lugs, so that both faces can be used. Something similar was done by Vacheron Constantin with its Tour de l’Ile watch released in 2005 to celebrate its 250th anniversary, but that was just “double face”, while the Patek Philippe Grandmaster Chime goes much further, with a case that itself could be considered a complication with a staggering 214 parts. The case is very large, 47 mm in diameter, 16.1 mm thick, with classical laurel-wreath decoration. 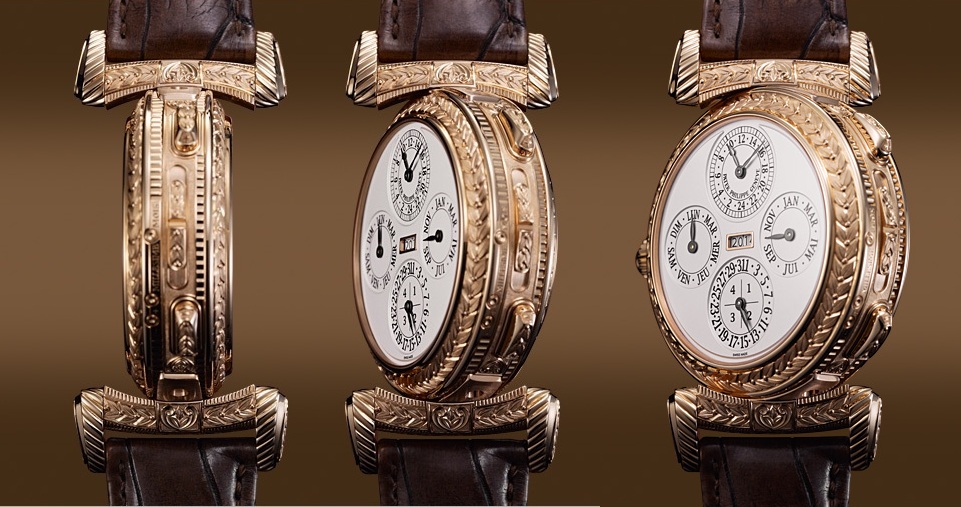 The reason for using both sides of the watch is of course because there are so many functions to display. On the face principally dedicated to time functions, there are the black hour and minute hands, and another central gold hand, for the second time zone. At 12 o’clock, there is a 24-hour subdial used for the alarm function. The alarm time that has been set can also be heard, using the gongs that are part of the repeater function. A bell-shaped window on the 24-hour subdial indicates whether the striking mechanisms, Grande Sonnerie, Petite Sonnerie, minute repeater, are active (white) or have been deactivated (red). The striking function is shown in a window at 7.30, with S for silence, G for Grande Sonnerie, P for Petite Sonnerie. A small circular window at 1.30 shows red if the strikework has been deactivated. The watch is manually-wound: the movement barrels provide a power reserve of 72 hours, while the barrel for the chiming functions has a power reserve of about 30 hours, but this of course depends on how often you use the watch to chime the hours. The crown is used to wind the watch and set alarm and time, and there is a crown function indicator at 4.30, with three indications, R (winding or remontage), A (alarm) and H (time setting). There are two power reserve indicators, at 9 o’clock for the movement, and at 3 o’clock for the strikework. A subdial at 6 o’clock shows the date and moon phase. 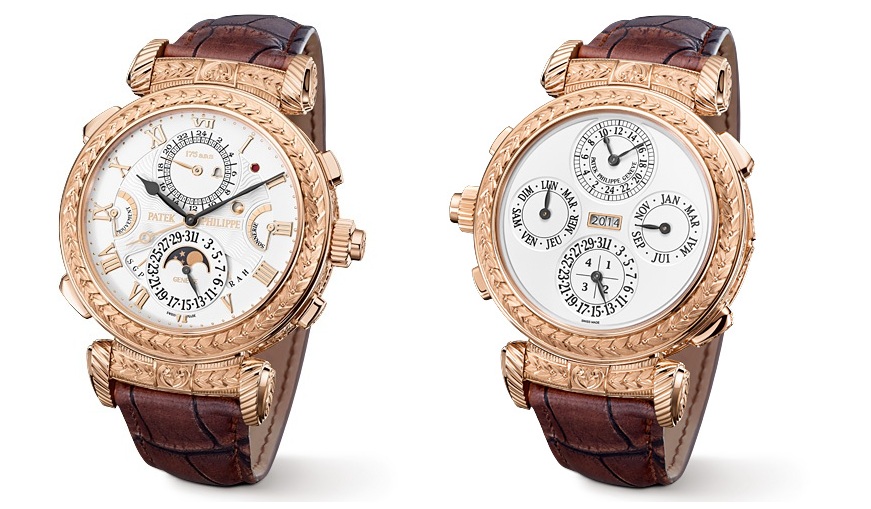 It sounds complicated, but Patek Philippe like to make watches that are very simple to use, and this piece, even with its many different functions, has been designed for intuitive use. The buttons are all labelled with engraved lettering and symbols. You don’t have to consult the instruction book, and the watch is protected from incorrect use of the pushers by means of isolation systems that protect the delicate mechanisms.

The Grande Sonnerie sounds the hour on the hour, and then every quarter-hour, it sounds the hours and then the quarters. The Petite Sonnerie sounds the hour on the hour, and then just the quarters every quarter. The minute repeater, triggered using the pusher in the crown, strikes the time at any moment, hours, quarters, and minutes. When the alarm is set, all other strikework functions are disabled, and only recommence after the alarm has sounded. The alarm time can be heard using the minute repeater mechanism, and likewise the date can be played: these two functions are world firsts, two of the six patents filed for the movement.

The other side of the watch is dedicated to the perpetual calendar, with day of the week, month and date on the three lower subdials, the year shown digitally at the centre, and the leap year shown on the bottom subdial (4 indicates a leap year). The top subdial shows the time, on a 24-hour dial. And so whichever face you are using, you can see time and date. In the photos below, details of the two faces, with the 24-hour time display at right: 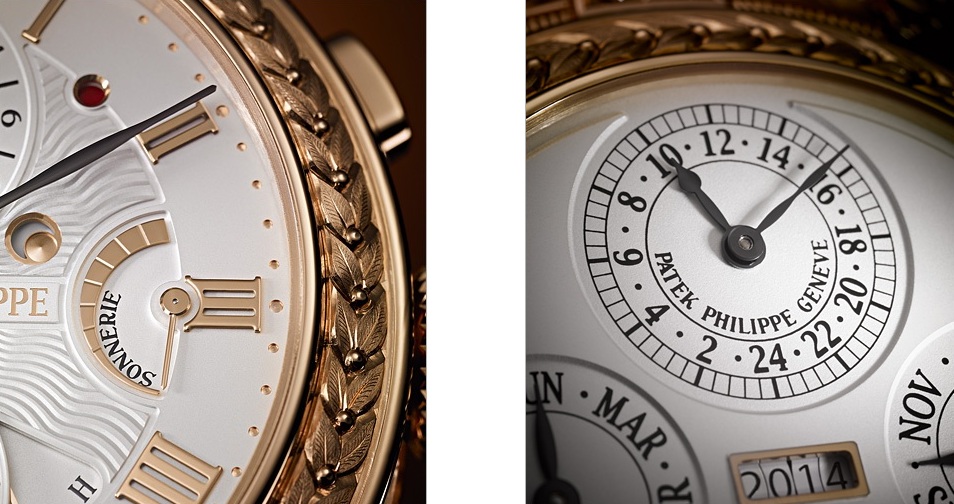 There are four pushers on the caseband: two for the second time zone (advancing or decreasing by one hour with each press), one for activating the alarm, and one for the date repeater. There are another seven controls on the caseband, for adjusting the calendar and moon phase indications. In the photo below, the alarm time subdial (left) and the crown (right). 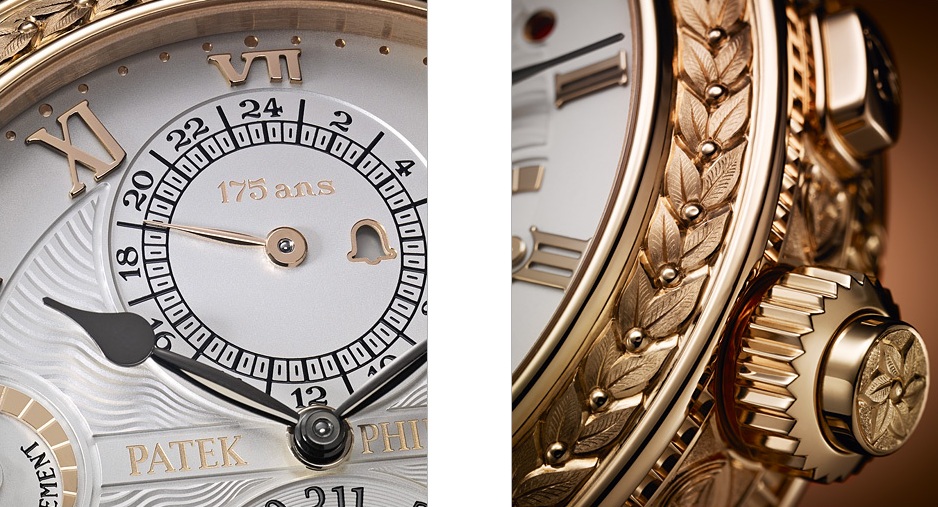 The Patek Philippe Grandmaster Chime watch is a limited edition of seven watches, six of which will be on sale at CHF 2.5 million each, approximately €2 million. The seventh will be on display at the Patek Philippe Museum in Geneva, in an exhibition of the brand’s many anniversary watches. The show runs from 15 November 2014 until 11 April 2015.

Watch more about this watch in this video:
[youtube https://www.youtube.com/watch?v=yIXPplShtg0&w=560&h=315] 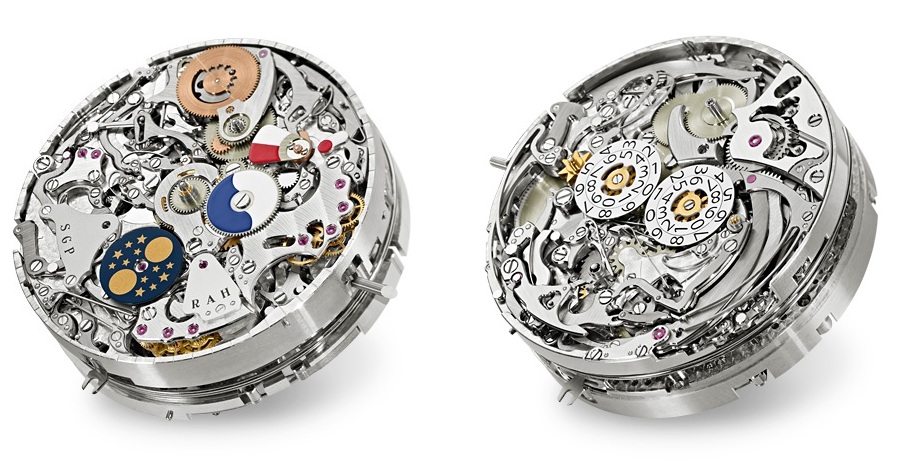 Below, side view of the movement, and the presentation case: