‘Skeleton watches’ seem perfect for Halloween, and so here is a small selection of watches on the skull theme. The motif has been around for a long time, more in art than in watches. Damien Hirst’s diamond-encrusted skull ‘For the Love of God’ is probably the best-known work on this theme, in platinum with 8,501 diamonds, but it wasn’t the first. The idea of a reminder of death is something present in all civilizations, and Hirst himself said that his artwork was based on an Aztec skull made in turquoise at the British museum. Another artist and friend of Hirst’s, John LeKay, had made a skull covered in crystals in 1993. The skull idea has also been used a lot in fashion, in particular by Alexander McQueen and Philipp Plein.

Below, the works by Hirst, the Aztec skull, and the piece byJohn LeKay ‘Spiritus Callidus #2’, all courtesy of Wikipedia.

Here are my top 10 skull watches for Halloween. No particular order.

Fawaz Gruosi, founder and prime mover of de Grisogono, has a GSOH, which emerges strongly in this piece, a dual-time zone watch with the two time zones displayed on dials within the two eye sockets. The piece is available in different versions, in which the main colour is created by snow-set white diamonds, black diamonds or rubies. The nose is a heart-shaped 1.5-carat white diamond specially cut from a 3-carat raw stone. The two dials are made in black-enamelled gold, with sockets lined with a spiral pattern of black and white diamonds. The mouth is set with white baguette diamonds, and it can be opened to flick out a ruby-set tongue. The watch is mounted on a galuchat strap, with a diamond-set clasp in the form of two bones. Price on request, you can find contact information and boutique addresses on the de Grisogono website. 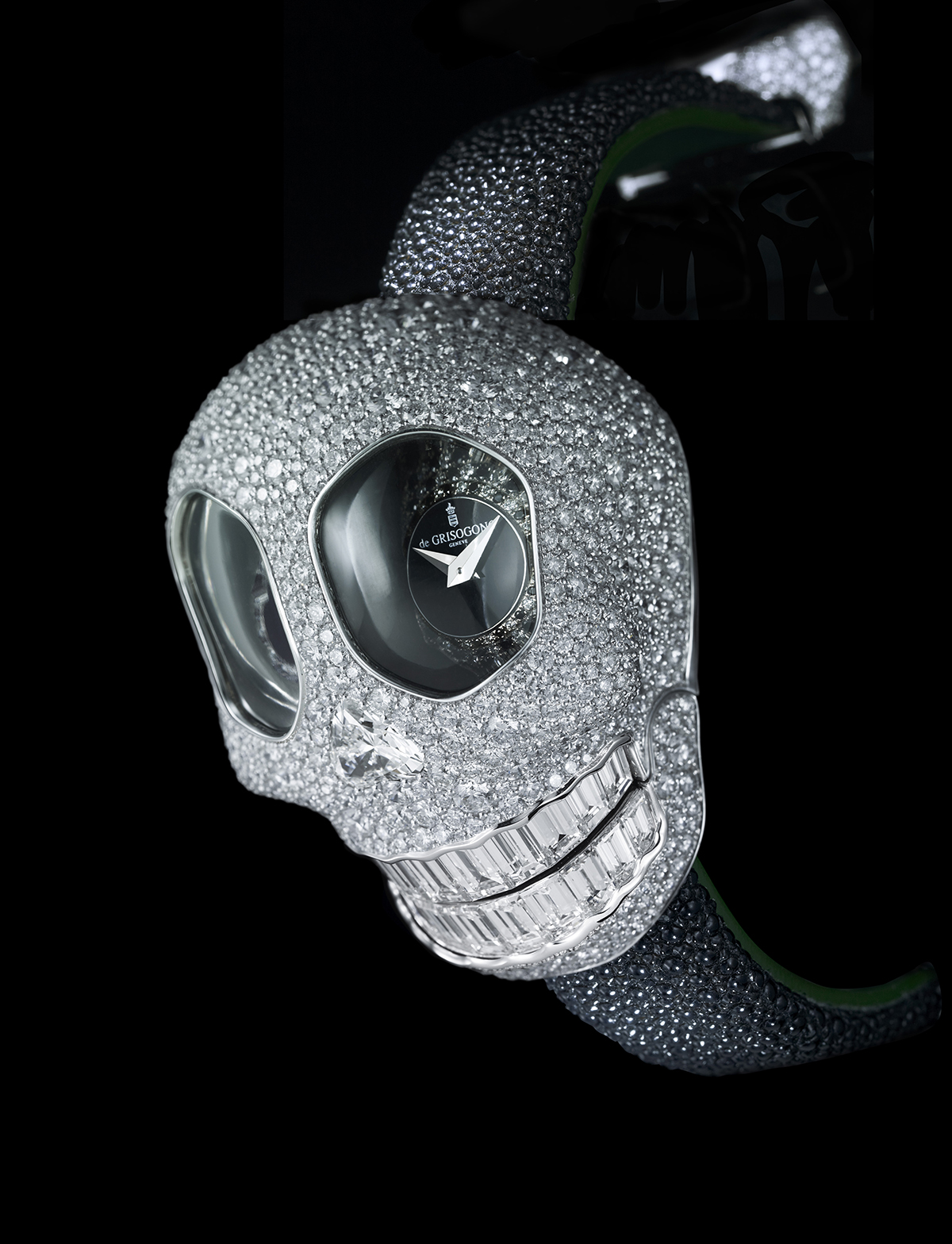 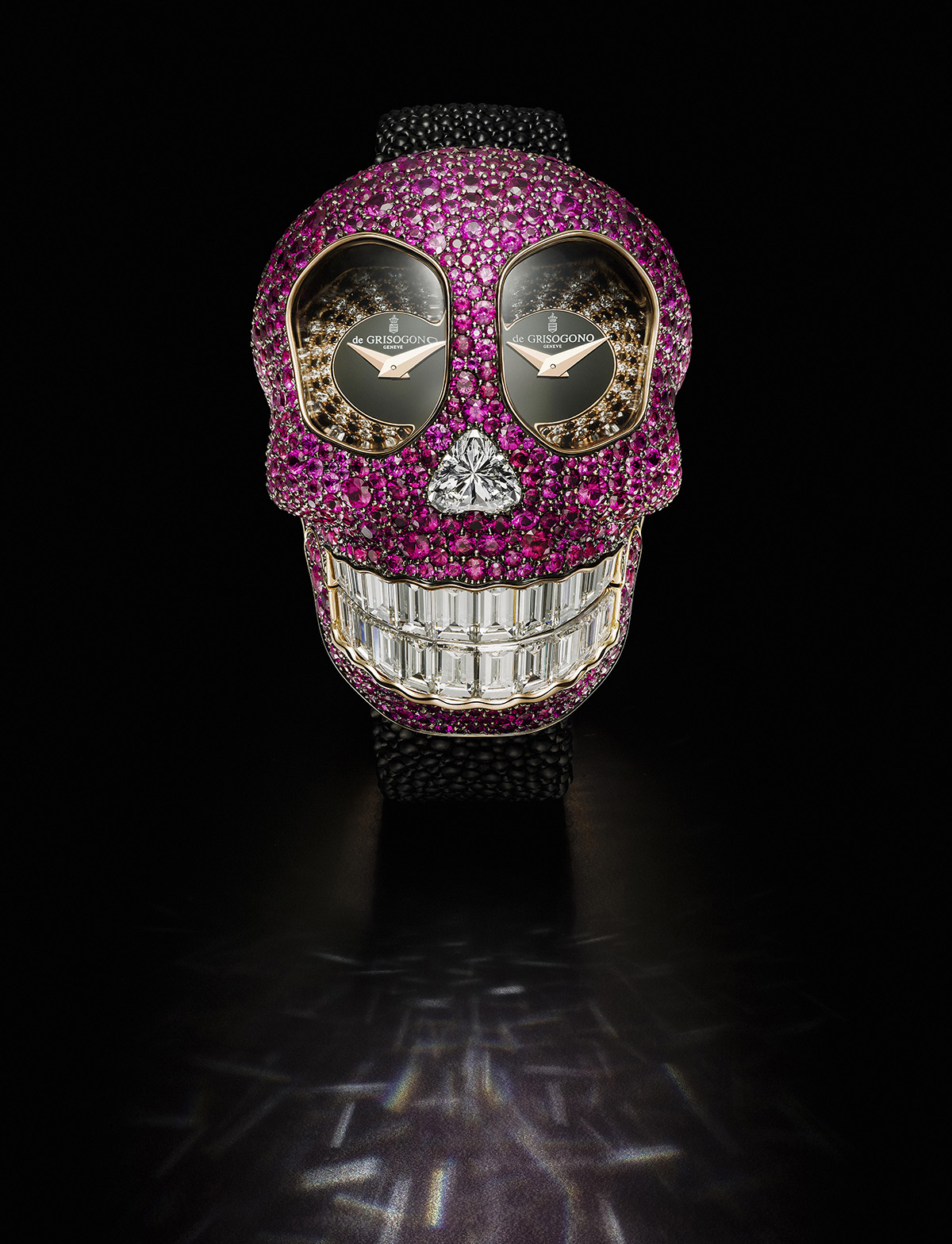 Below, the cross-bones buckle: 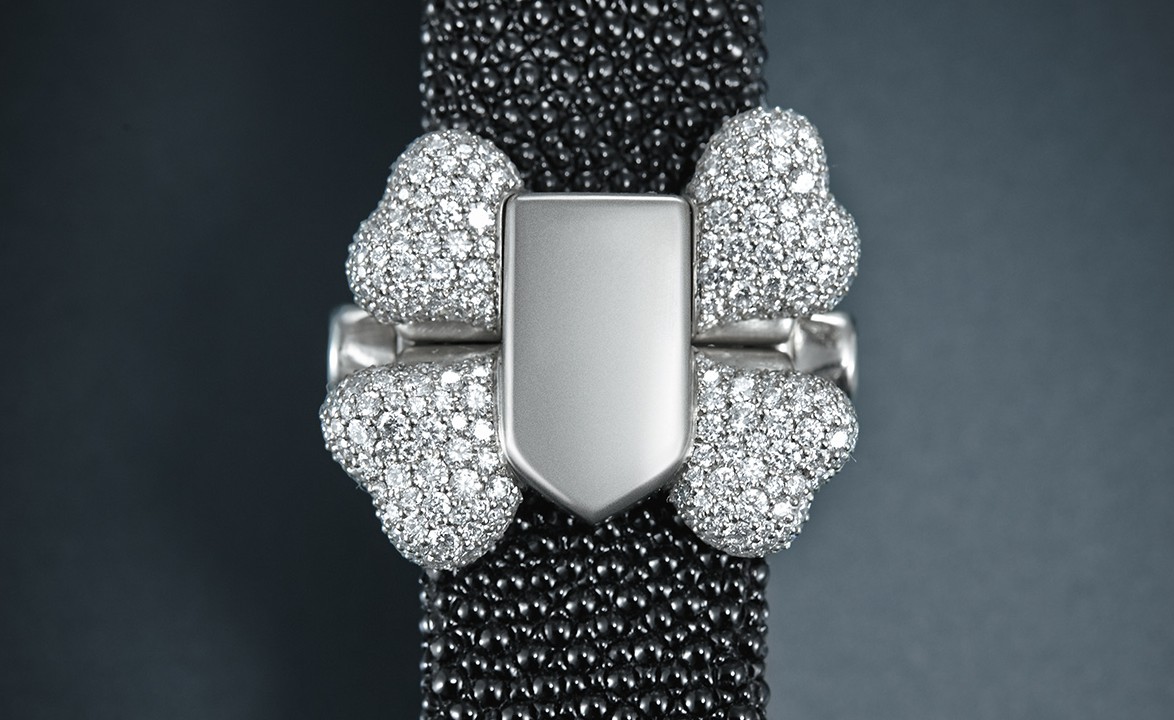 Below, detail of the ruby-version watch with jaw open and protruding tongue: 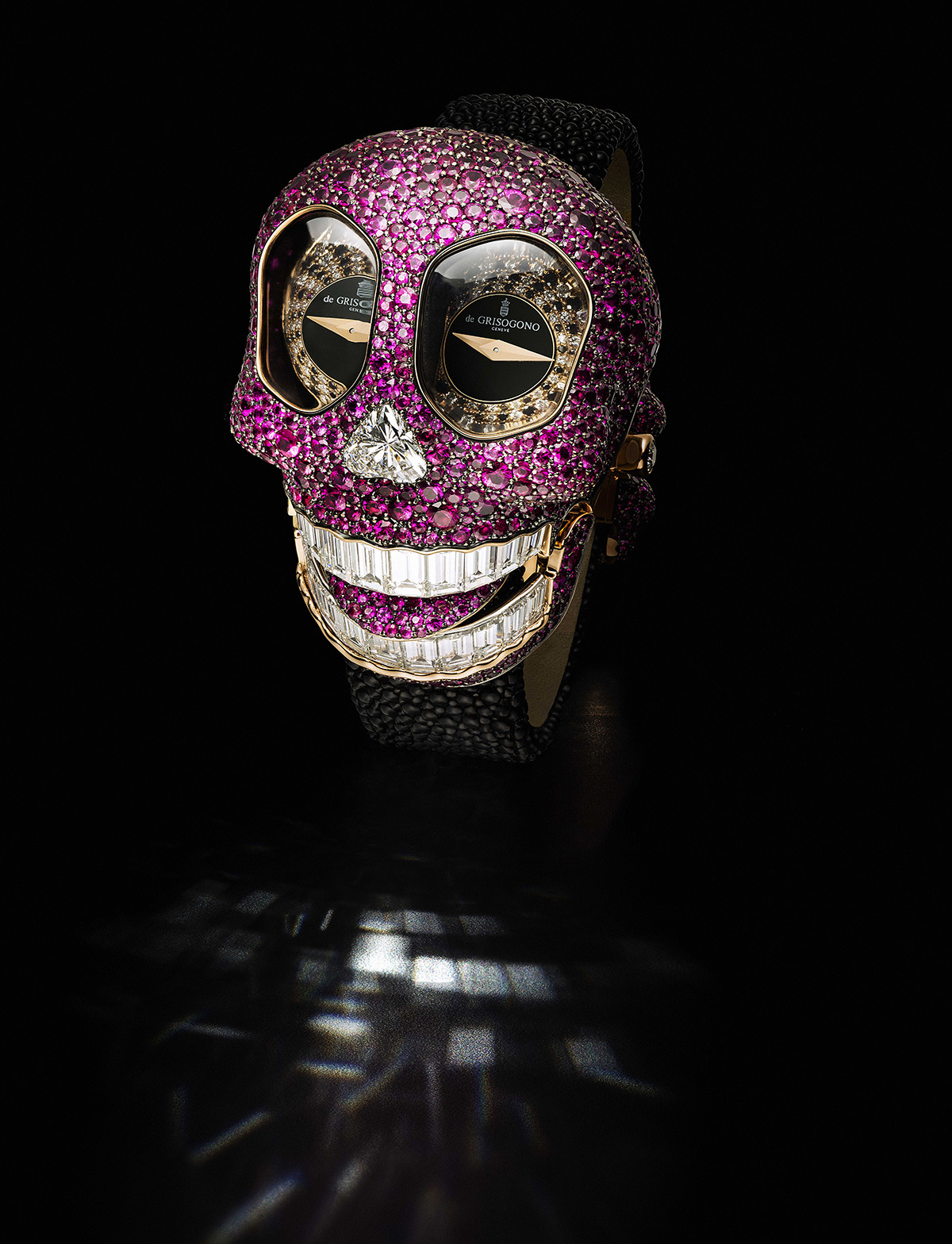 This watch, a limited edition of 21, with 15 in titanium and 6 in red or white gold, is (of course) a “skeleton”, with dial markings limited to the inner bezel. The skull, attached to the case by four bridges, grips the tourbillon cage jewel in its jaws, and the rear of the skull forms the central bridge. The calibre RM 052 movement is manually wound, and provides about 48 hours power reserve. Watch glass and caseback are in sapphire. It’s a large men’s watch, with a case 42.7 mm wide, 50 mm high and almost 16 mm thick. More info from richardmille.com 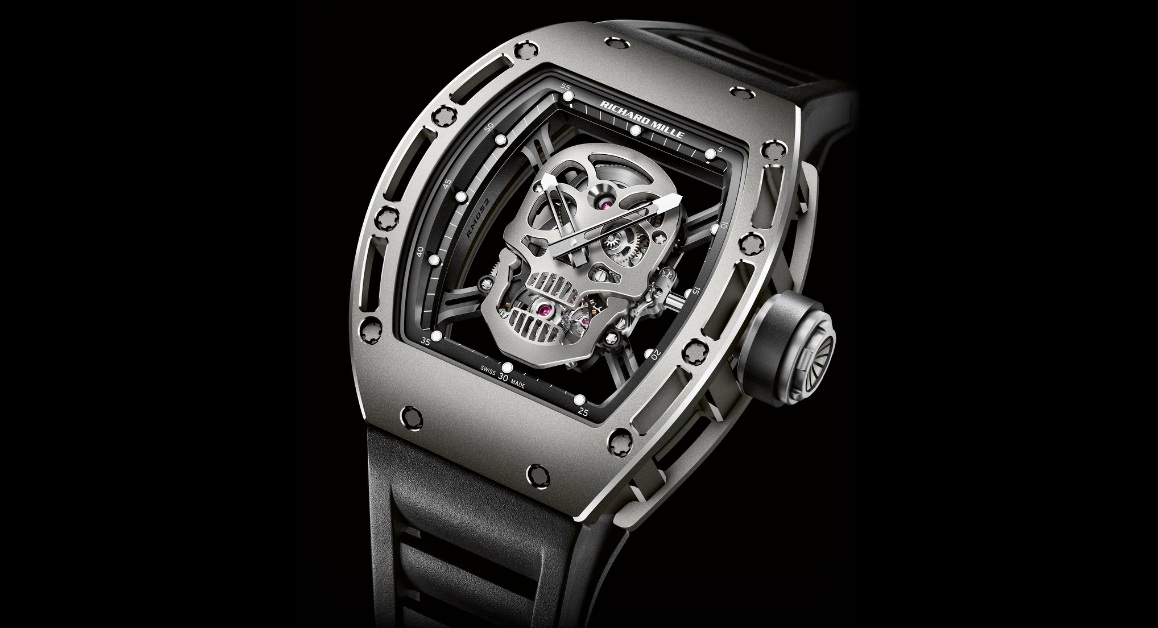 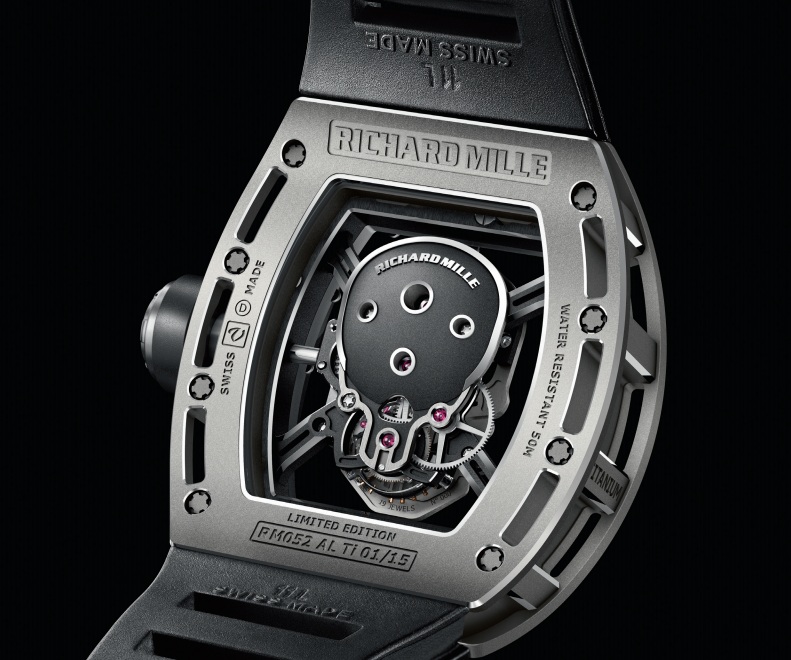 Fiona Krüger launched her Skull watch in September 2013: it reflects the three years she spent in Mexico as a child, her studies in Switzerland, and a 17th-century skull watch owned by Mary Queen of Scots. This piece is a limited edition of 12 pieces, with a mechanical TT718-calibre movement with a 5-day (120 hours) power reserve made by Technotime. This exceptionally long power reserve is made possible by the two barrels. The caseback is engraved with the motto “Memento memorieris.” Definitely a watch for men, 41 mm in width, 57 mm in height, 10 mm thick, with a leather strap. Price about €12,600 (CHF 15,200), you can order on her website.

The visual design of this piece by Mr Jones watches is by British tattoo artist Adrian Willard, with reference to the Mexican Day of the Dead festival. There are no hands, because the time is shown on the skull’s teeth, with the two upper front teeth showing the hours, the lower jaw showing the minutes. The piece has an automatic mechanical movement with jumping hours function, so that the hour changes instantaneously at the start of the first minute of each hour. The watch costs €254, available from the Mr. Jones website. The brand is based in London, and the watches are designed by Crispin Jones. 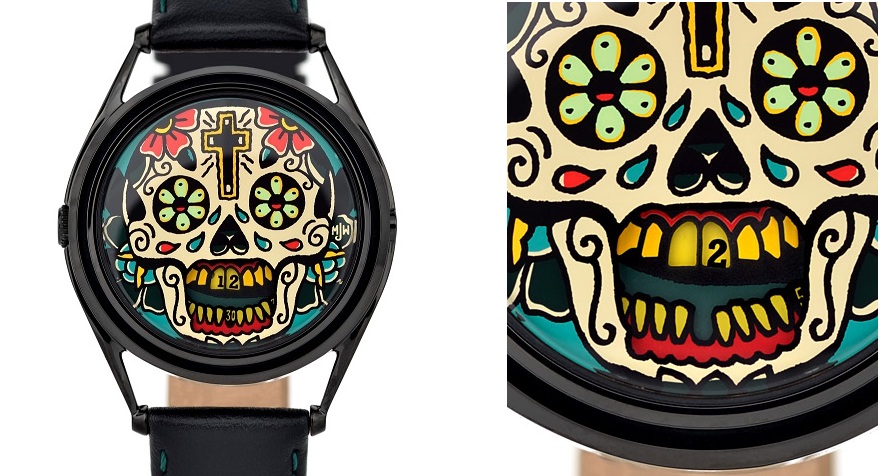 Brilliant humour in this piece. The dial has a mirror finish, so you always know who the message is for! The watch is in stainless steel, with black leather strap, and a quartz movement. Diameter is 35 mm, so pretty much unisex. €181, available from the Mr. Jones website. 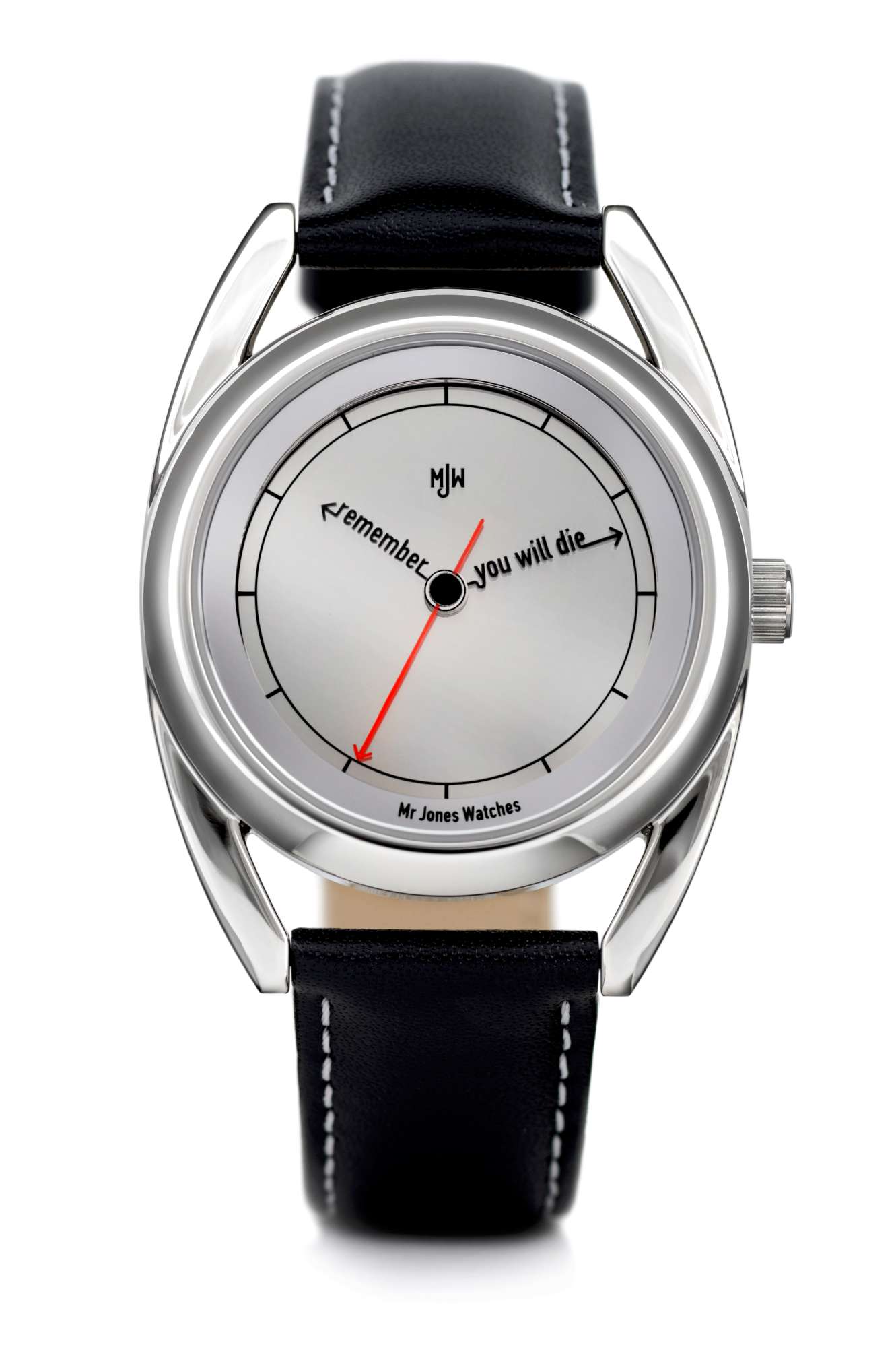 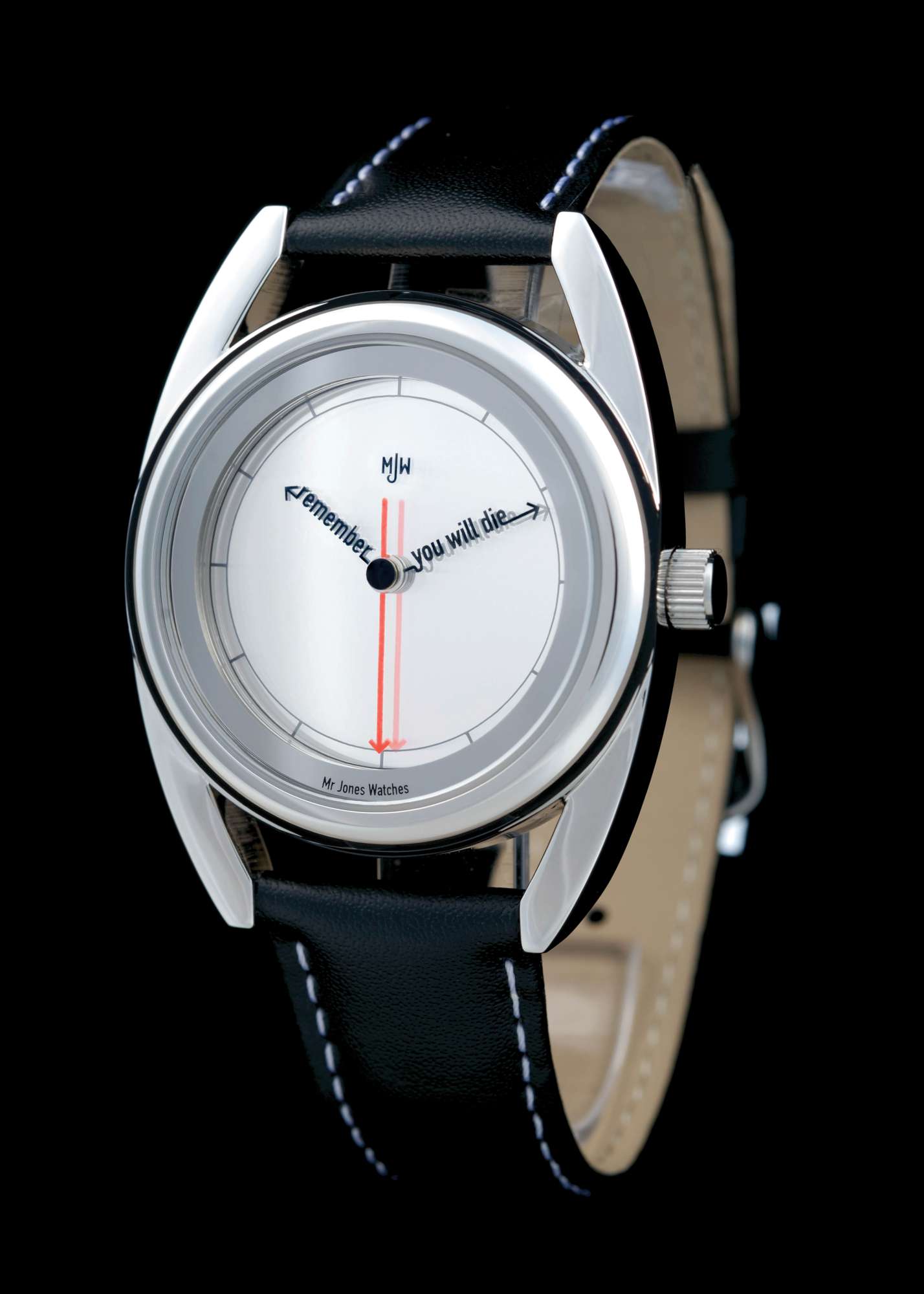 A watch based on U.S. Airborne tradition, in a limited edition of 999 pieces. The steel case with PVD finish is 46 mm across; inside, there is an automatic mechanical movement. The watch is made in several versions: this has a distressed leather strap. About €3,900. More info at http://www.bellross.com/ 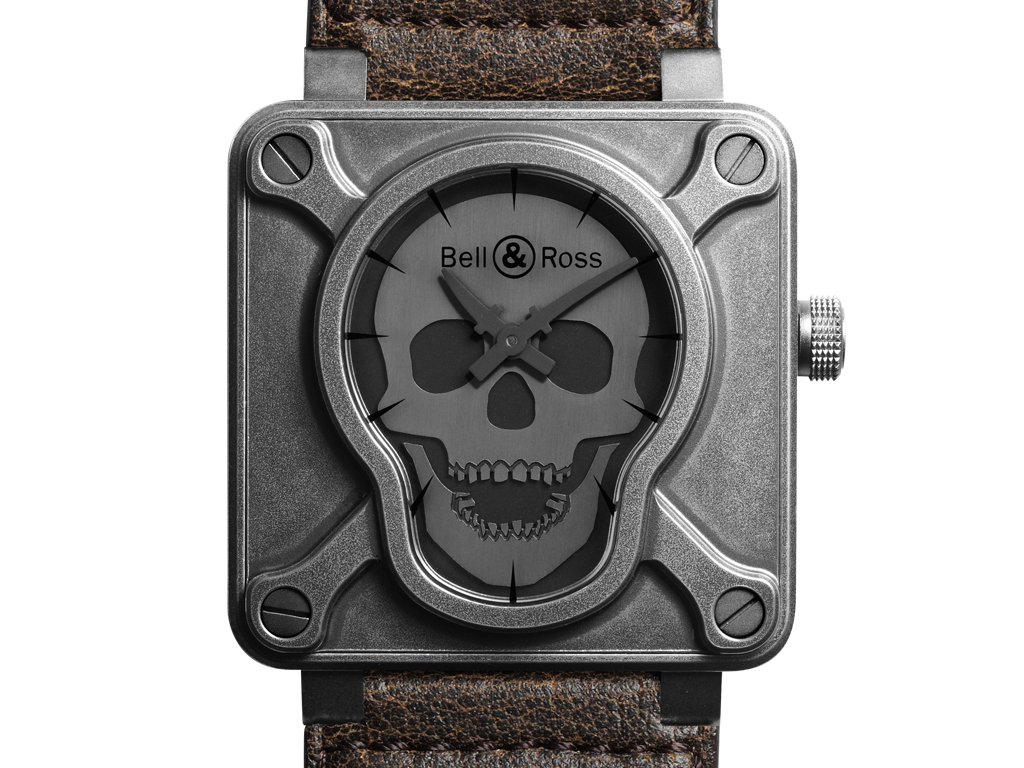 The dial is etched with two skulls engaged in a dead interesting conversation. Inside, the automatic Calibre Eros movement provides 96-120 hours power reserve. The watch is 42 mm in diameter, 12 mm thick, with steel case and alligator strap. Reference PIC 60013, further info at http://www.speake-marin.com/ 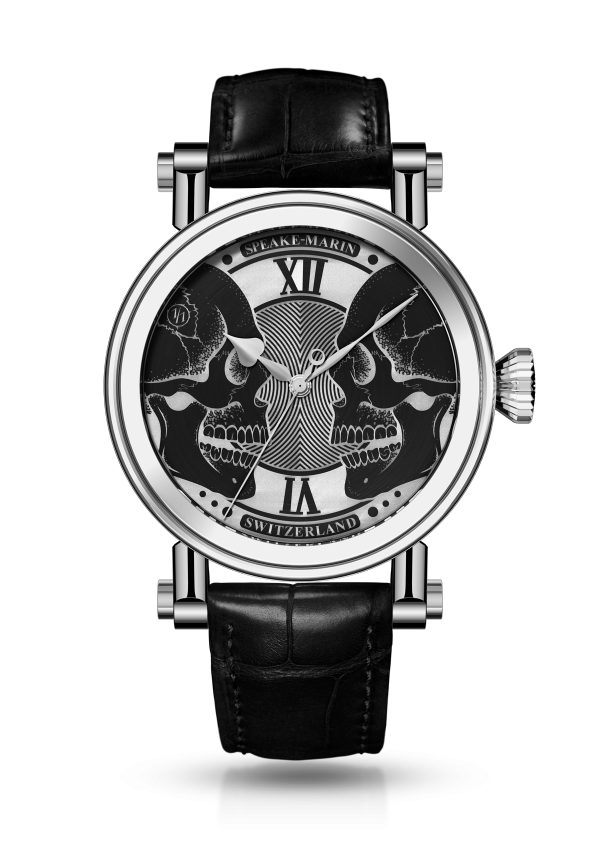 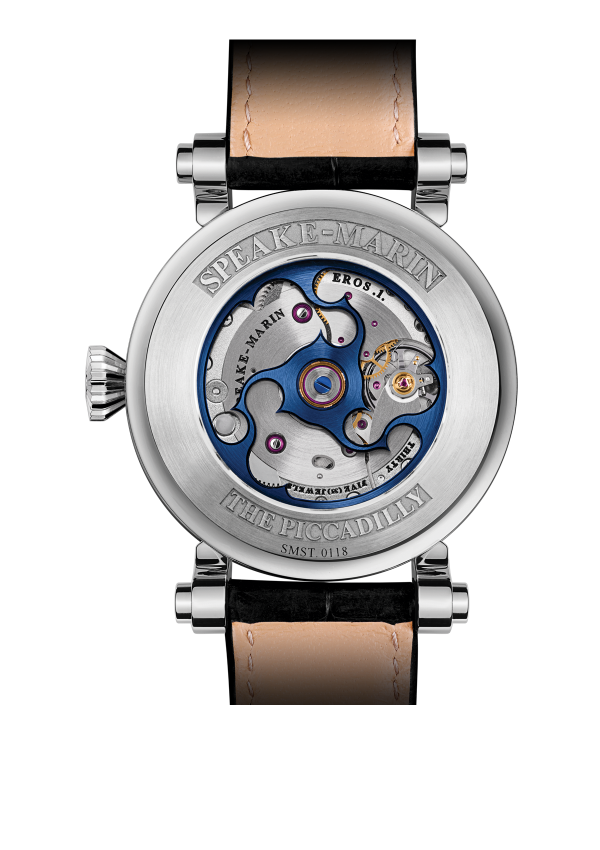 This is a watch that you can only buy in combination with a motorcycle manufactured by Swiss custom bike manufacturer HardNine Choppers. Both of the items in this pair are called H9C-DNA, and both share some visual design features, such as metallized purple coatings, parts in gold, perforated leather, and skulls. The watch by Romain Jerome is in a skeletonized 44 mm black PVD-coated case, with red gold bezel and hands. Parts of the FJ004-M movement can be seen through the purple skull, such as the barrel which appears under an enigmatic H9C logo on the forehead, and the balance wheel under the teeth. The watch has a perforated leather strap, a reference to the motorbike’s handlebars. The hand-wound movement has a power reserve of 48 hours. The motorbike is a customized 1943 Harley Davidson 750 cc, originally owned by the Canadian Army and entirely reworked by Danny Schneider of HardNine Chopper. The watch+bike combination costs about €91,000, but unfortunately there was just one set and it has already been sold. But Romain Jerome has launched a limited edition of nine H9C-DNA watches with the same design, but with a mirror-polished metal H9C skull. Each of these costs €17,500. More info from www.romainjerome.ch 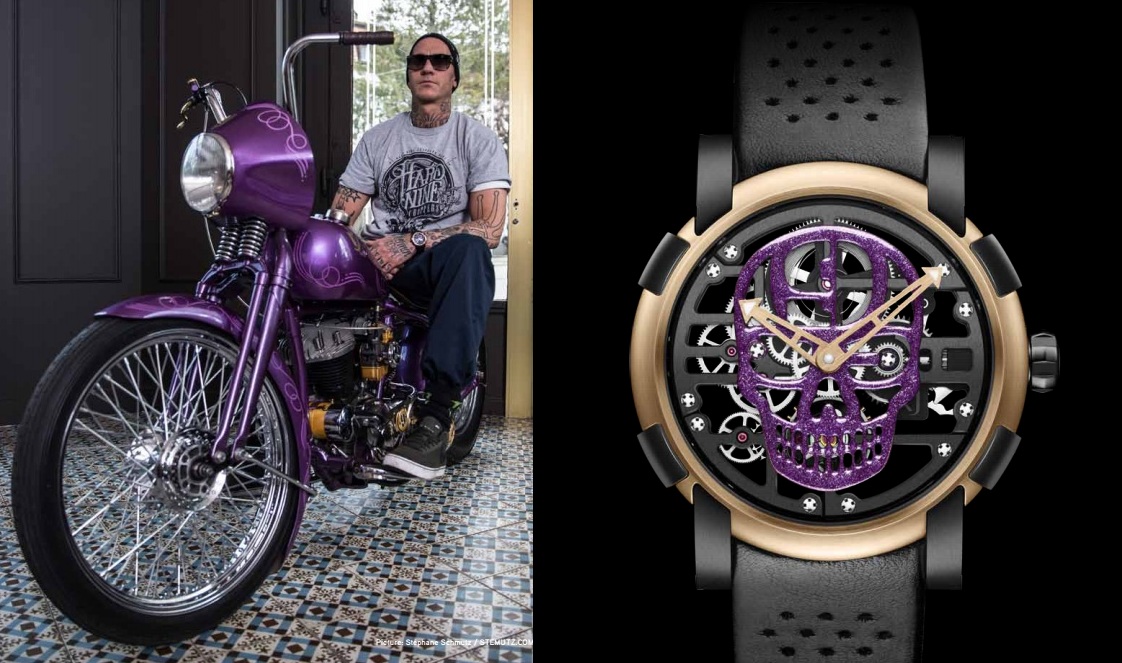 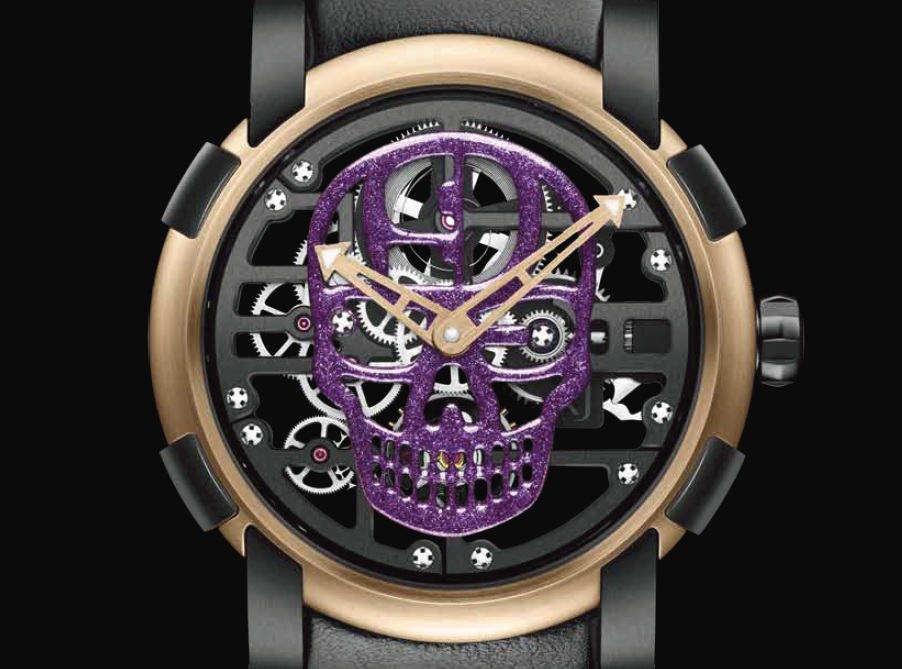 Below, the limited edition of nine H9C-DNA watches with mirror-polished metal skull: 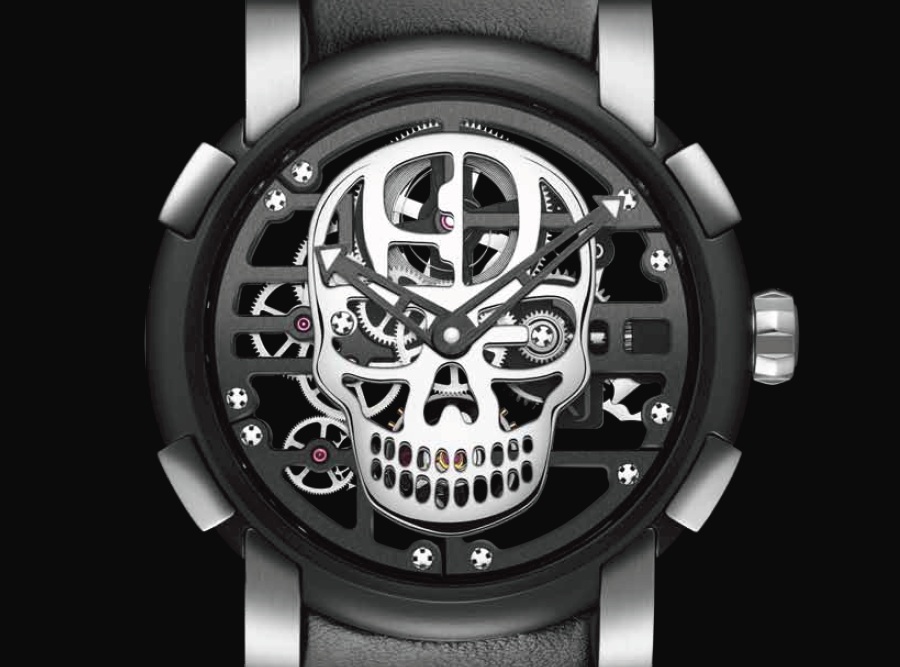 A 25-piece limited edition, Día de los Muertos has a mechanical automatic movement; the case is in black PVD-coated steel, the bezel is in black ceramic, the dial in mirror-finish black, with a skull applique with champlevé enamel decoration. With black alligator strap. More at http://www.romainjerome.ch/ 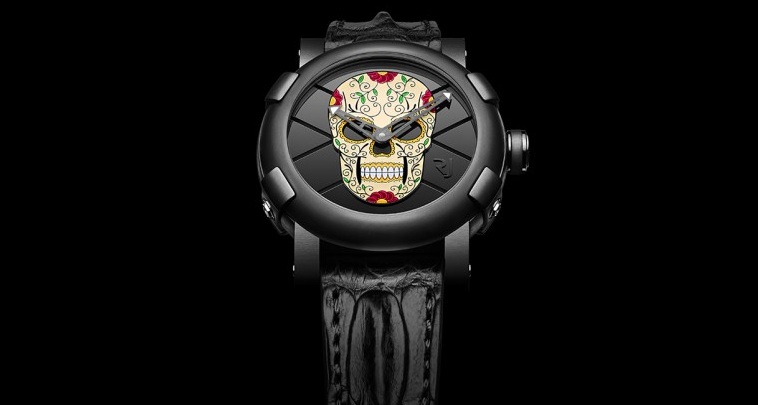 This watch, the first product by Strom launched in 2010, has a splendidly Gothic appearance, with Germanic-style indices and Strom logo, and a case decorated with skulls and Gothic arches. The dial colour is, of course, bone white. The piece was designed by Daniel Strom, who founded the company in Nidau-Biel, Germany, specifically to make watches that embody his ideas on time and life. All the watches are hand-finished, with no two alike. They are powered by the automatic ETA 2824 movement, and it looks like that to set the time, you have to pull out the skull-shaped crown. The black alligator strap has a buckle with skull detail. The Strom Agonium website provides an interesting version of the Memento Mori, Carpe Diem (remember you will die, so seize the day) concept. I’ll rephrase it here. The transience of our lives is difficult to accept, but time, which determines this transience, is essential for life. We find it hard to come to terms with the fact that however clever or powerful we are, time is something superior to us, something that we cannot control. What we call life lies between the time of our birth, and the time of our death, and the medium through which life flows is time. And so time is not just a unit of measurement, it is the energy of life itself.

Below, the watch, with detail of the buckle:

Below, more views of the watch with its “bone white” dial: