1. Origin of the California dial. 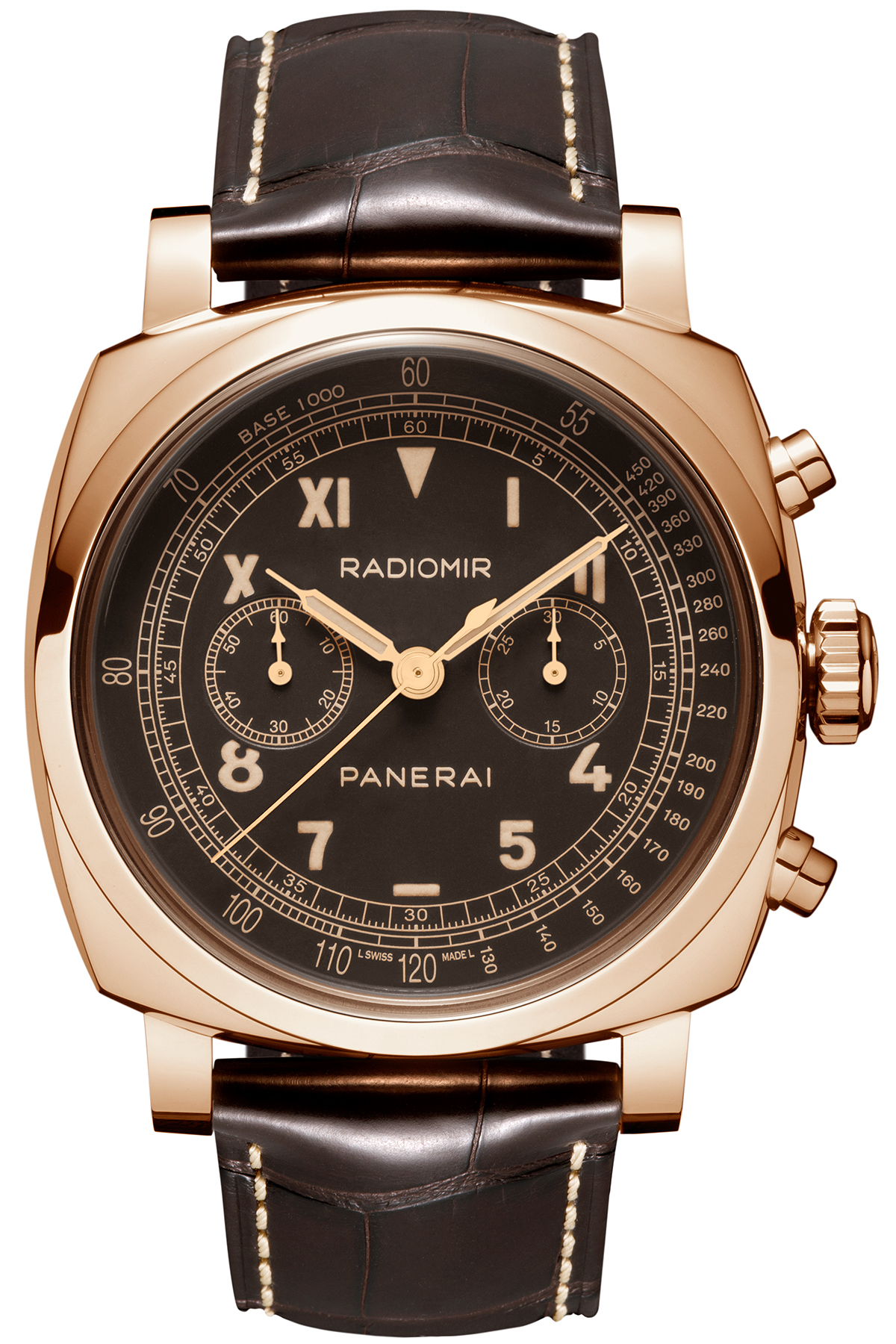 The watch shown here, the Radiomir 1940 Chronograph Oro Rosso PAM 519, has an unusual layout with Roman numerals at the top and Arabic numerals below, an arrangement now known as the California dial (apparently because some companies in California, such as Kirk Rich, specializing in restoring dials, provided this arrangement in the 1970s). In actual fact the pattern is vintage Panerai, and runs back to 1936 when the brand were negotiating a commission from the Italian Navy, and decided to present them two alternative dial designs, one with Roman numerals, one with Arabic. For some reason, for the presentation they incorporated both designs into a single dial, perhaps to save time and money, perhaps to make comparison easier. What actually happened during the meeting is unclear, but at the end, the officer concerned didn’t make a choice, but simply approved the dial that had been presented, and so Panerai obediently made their first delivery of watches, the 1936 Radiomir, following this unusual, illogical, irresistible design.

Part of Panerai’s early success was due to the invention, by Guido Panerai in 1915, of Radiomir, a luminous paint containing the radioactive element radium. He mixed it with zinc sulphide, a compound that emitted light when struck by the radioactive particles from the radium. This gave the watch excellent night-time and underwater visibility, essential for the naval authorities who were important customers at the time. While zinc sulphide gradually lost its light-emitting properties, the radium remains radioactive for hundreds of years (half life is 1,602 years), and so some antique Panerai’s are still unsafe to wear. Of course, at the time, Guido Panerai didn’t know that radium and radioactivity were so dangerous. Today, the luminosity of Panerai’s hands and dials is provided by SuperLuminova, completely safe.

Today the luminosity of the numbers and hour baton indications is enhanced by a sandwich dial structure, dating back to 1938: the SuperLuminova is applied to the lower dial plate, and the top plate has cut-out numerals and hour indicators. This also makes the number design unique and highly recognizable. 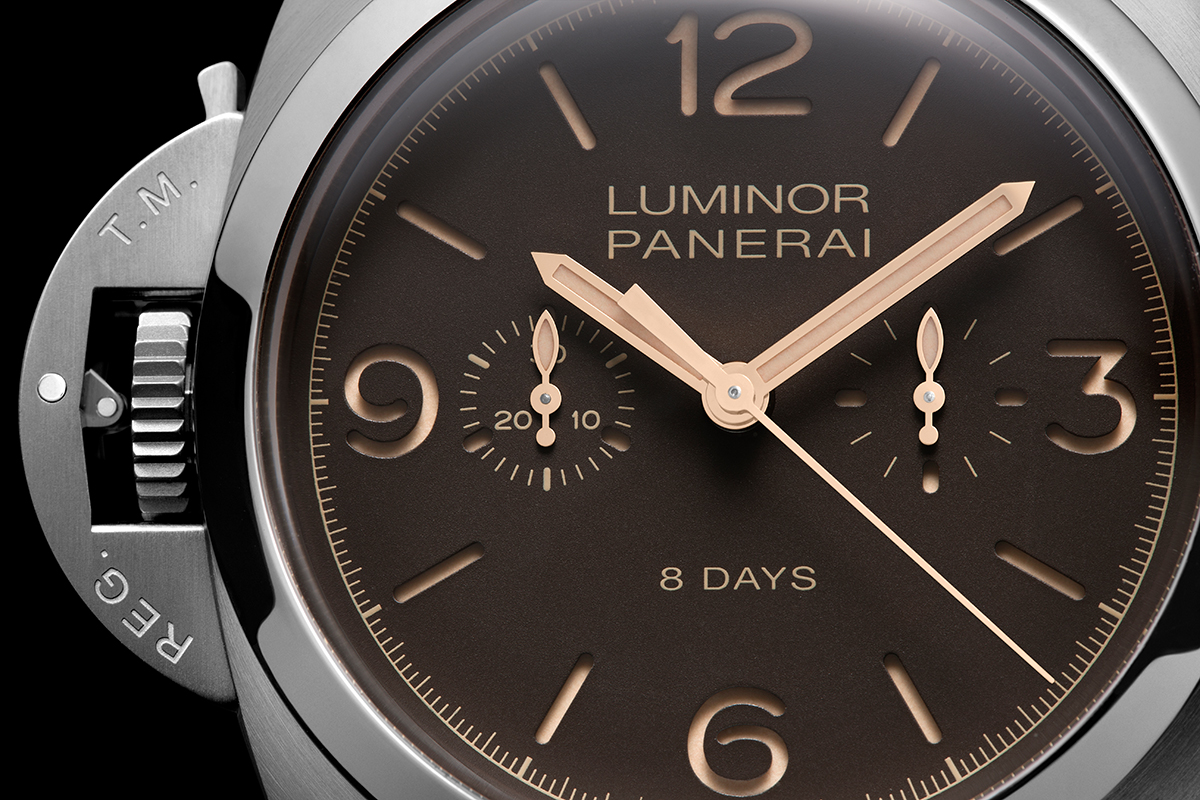 4. Crown on left-hand side

Many of Panerai’s early watches – as well as wrist-worn compasses and depth gauges – were made for the commando divers of the Italian Navy. With all this equipment to be worn on their wrist, at some stage it seemed logical to put the watch on the right wrist, and so Panerai made some models with crown and crown protector on the left-hand side. This is still a feature of some contemporary models such as the Panerai Luminor 1950 PAM579 Chrono Monopulsante Destro 8 Days shown above.

The crown protector dates to the early 1940s, and it was originally a feature designed to protect the crown seal from damage by jolts and therefore to prevent infiltration by water.

In 1949, Panerai invented another luminous dial paint, naming it Luminor. This was based on tritium, a hydrogen isotope, which emits beta radiation generally considered as safe for human health. Tritium has a half-life of about 12 years. The Luminor trademark is the origin of the name used for many of its models.

In the 1930s, Panerai, at that time based in Florence, was assembling watches made using Swiss-made movements, bought from Minerva (now part of Montblanc) and Rolex. Rolex has never made watches for any other brand except for Panerai. 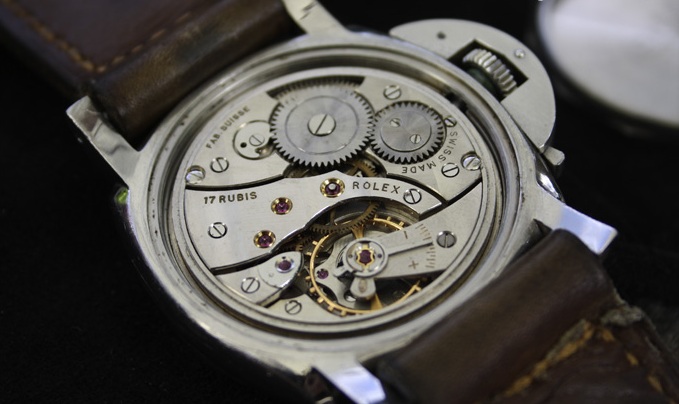 Another of the vintage details on contemporary Panerai watches is the crystal in Plexiglas. This material is lighter than sapphire, but less scratch-resistant, and so models with Plexiglass crystal are supplied with a spare crystal (as in the Panerai Luminor 1950 PAM557 Destro 3 Days shown below). 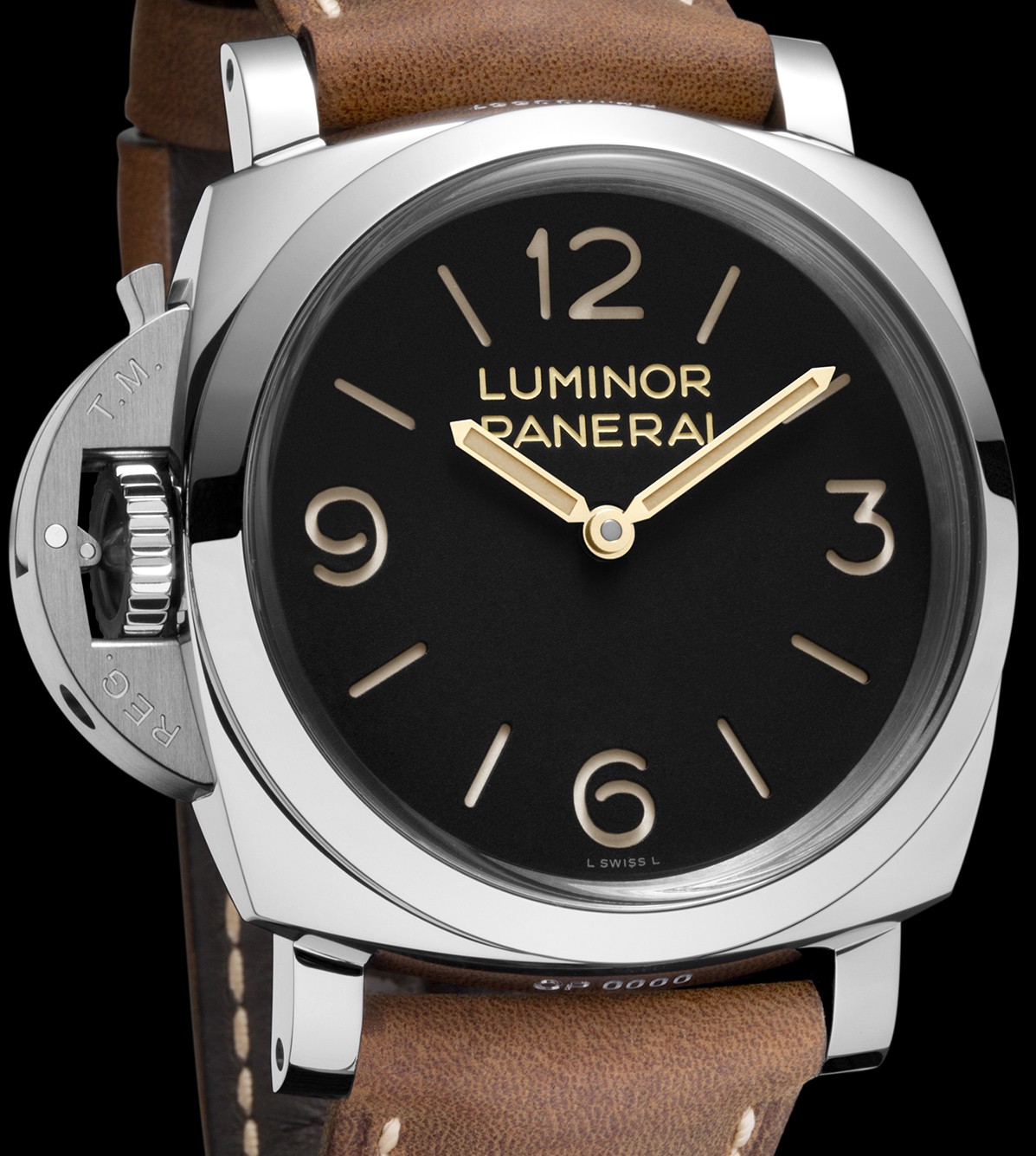 Watch size is another classic feature of Panerai. This also has historical origins. In 1956, Panerai developed a watch for the Egyptian Navy, now known as the Egiziano PAM00341: it has a case size of 60 mm. 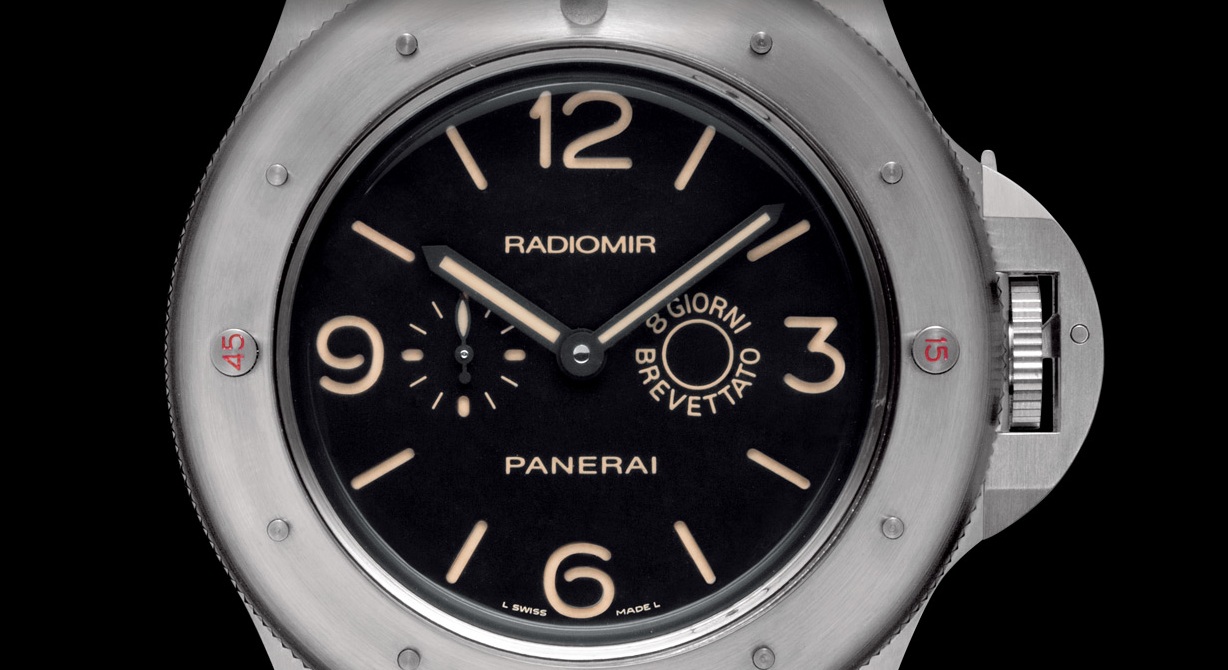 In 1997, Johann Rupert, head of the Richemont Group, was in a meeting with some other Richemont executives and saw that one of them was wearing a striking cushion-shaped watch that he hadn’t seen before. He asked him what it was, and the executive said that it was a watch by this brand Panerai of Italian origin. Johann Rupert said, “I’d love to buy it.” The executive obligingly told him that he would give him the address of a boutique in town that stocked their watches. Rupert replied, “No, I don’t want to buy the watch, I want to buy the company!”

A Panerai Luminor Marina was worn by Arnold Schwarzenegger in Eraser, and by Sylvester Stallone in Daylight. Stallone has the right sort of wrist for the 60 mm Egiziano mentioned above, and was seen wearing it in 2009. Steven Seagal wears his own Panerai Luminor Marina in Exit Wounds. Jason Statham wears a Panerai in Transporter. Hugh Grant wore Panerais in Two Week’s Notice and Bridget Jones’ Diary. Dwayne Johnson give Panerai an appearance in The Rundown, and Josh Hartnett wears his own personal Marina in Hollywood Homicide. 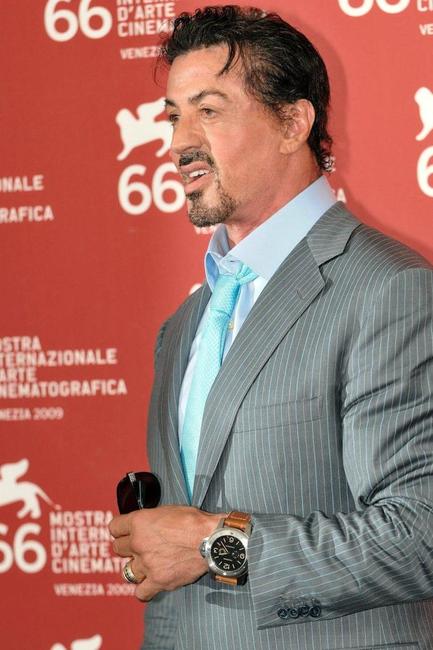