I was excited when I saw news about the Longines Conquest 1/100th Horse Racing, a chronograph with a hand that indicates elapsed time to the nearest one-hundredth of a second. Then I saw that it’s a watch with a quartz movement and I was less excited, but even so, it’s a piece with an attractive function, designed specifically for horse-racing in which 100th of a second can mean a distance of 20 cm.

Differently to mechanical 100th-second chronograph watches, this piece has two central second chronograph hands, one moving conventionally at one-second intervals, and the red 100th-second hand. The latter doesn’t revolve continuously: when you start the chronograph, just the central sweep seconds hand starts moving, the red 100th-second hand stays still. It’s when you press the stop button that the red hand moves to indicate the time to the nearest 100th of a second. I’m sure there’s a good technical reason for this (in addition to reducing energy consumption) but it’s less theatrical than the foudrayante hand flashing round the dial at one revolution per second.

The other chronograph subdials are all towards the top of the dial, with a 30-minute counter at 2 o’clock and a 12-hour counter at 10 o’clock. The dial at 6 o’clock is for continuous seconds. The watch has the usual start/stop and reset buttons; as it’s quartz, it can record an intermediate time while the chronograph continues to run. This piece has a steel bracelet, steel 41-mm case, SuperLuminova on hands and hour indices. The L440 quartz movement was developed for it specifically by ETA. Its reference number is L3.700.4.76.6. Its water-resistance rating is 300 metres. Its price is €1,040 (£890, $1,600), which may seem high for a quartz watch, but it reflects the fine finish of the very three-dimensional dial, with applied numeral at 12, applied hour indices, and the nice machining of the subdials. See more in this video. 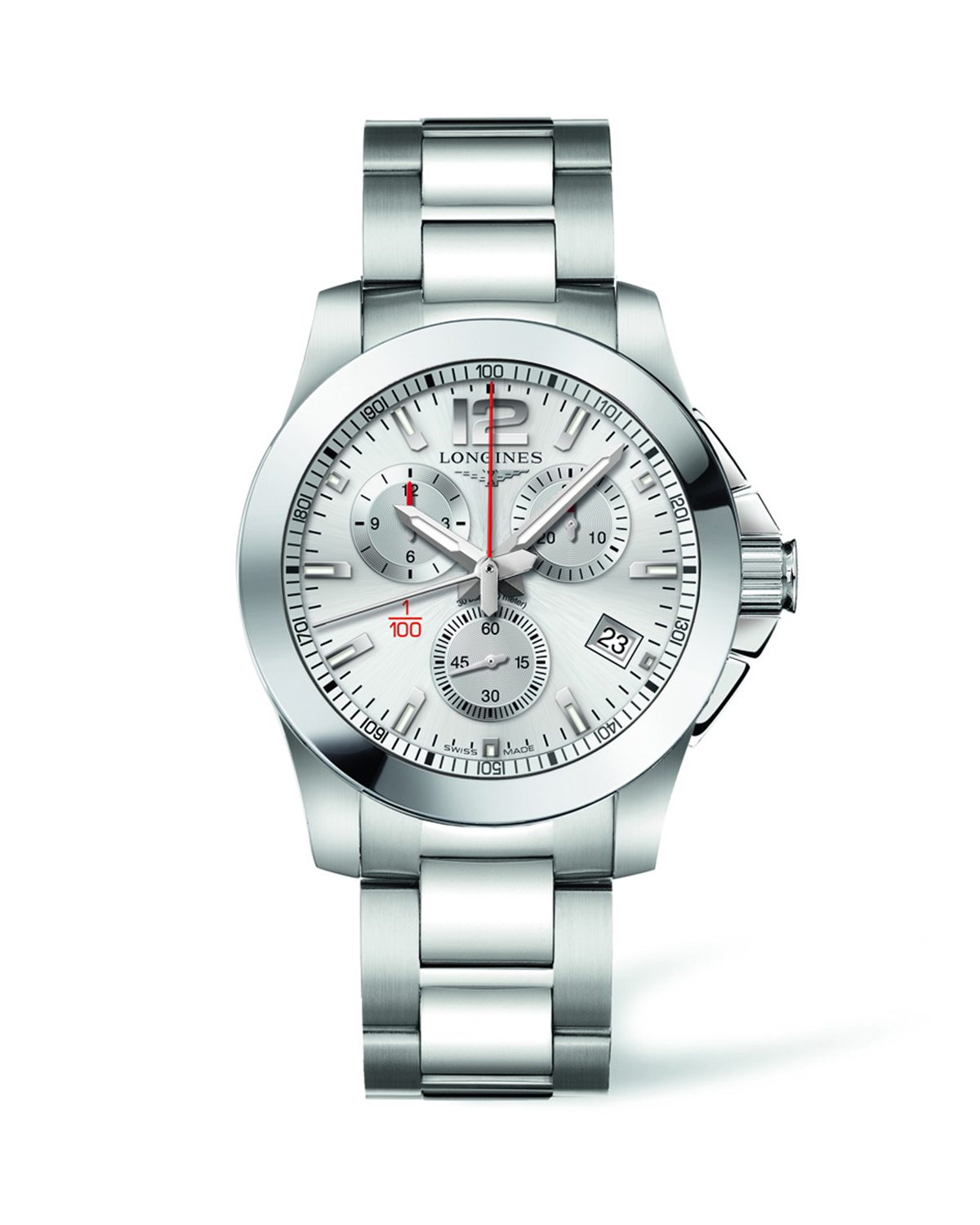 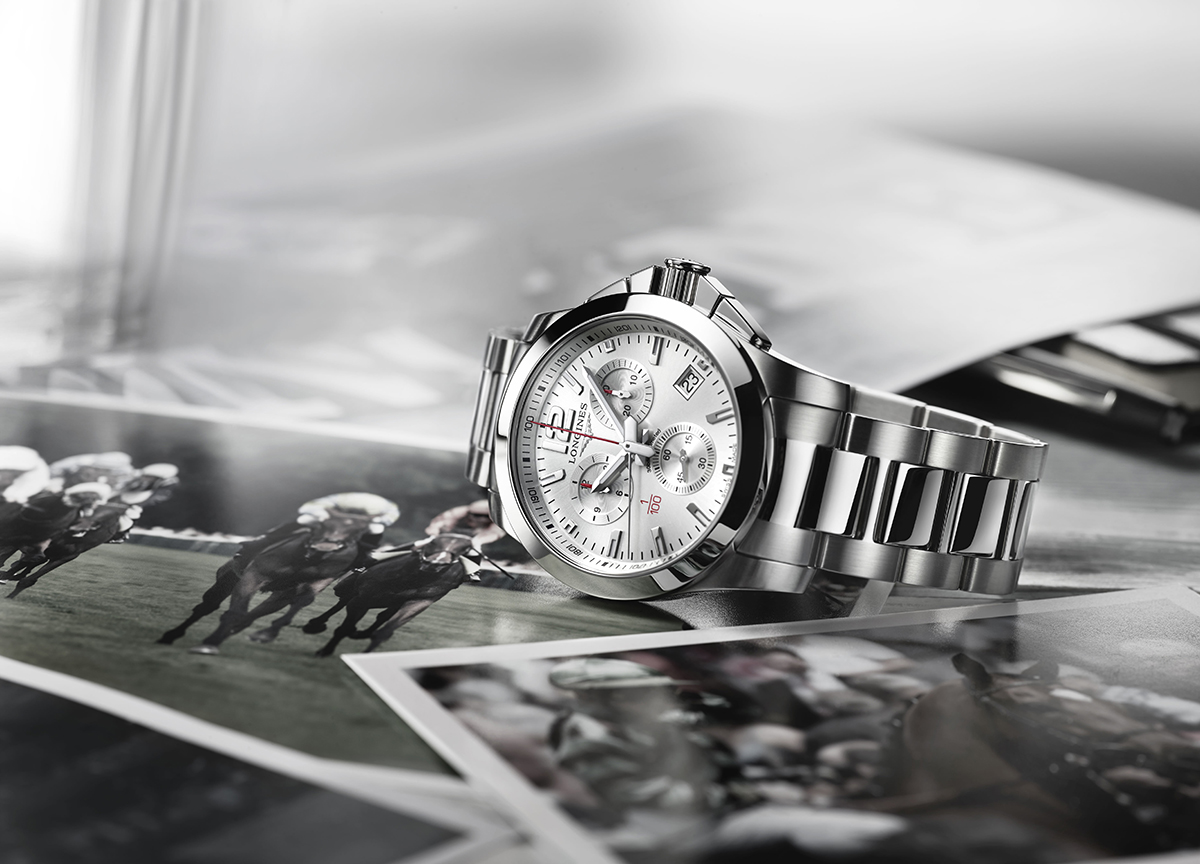 The watch is a new version of another Conquest 100th, the L3.700.4.96.6 (on the left in the photo below), which is similar in every respect except for the blue dial. Perhaps more interesting in terms of functions is the L3.701.4.76.6 (on the right in the photo below), a piece in steel and ceramic, in which the chronograph function is limited to seconds and hundredth-seconds with two central sweep dials; it has a penalty counter at 10 o’clock (presumably operated by the pusher on that side of the case) and a table selection counter at 2 o’clock. This is pure showjumping: table A scoring is when extra seconds are converted into faults, while table C scoring converts faults into extra seconds. 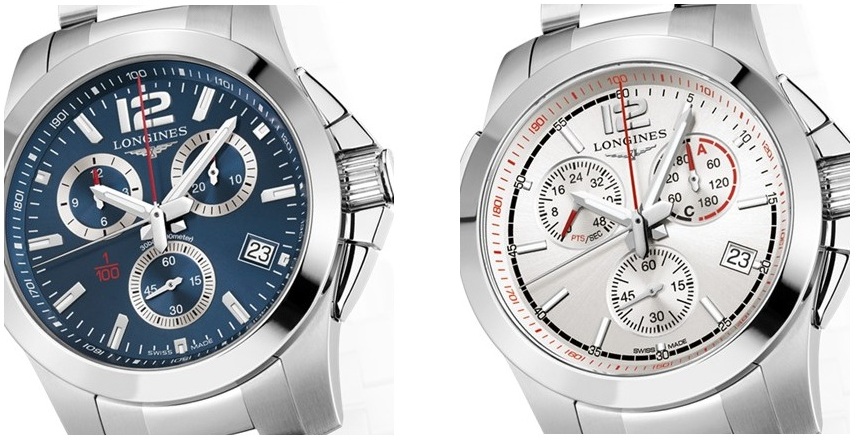