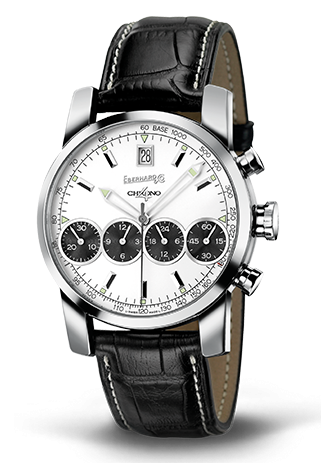 In my experience, one of the practical problems with many conventional chronographs – the ones with two or three subdials for minutes and hours, which often end up looking a bit like a gas meter – is that they are often partly obscured by the minute or hour hand. These hands are usually much larger than the markings on the dial and can easily cover at least a quarter of the fine markings on one of the subdials.

Some watches get around this problem by means of a different arrangement of the information on the dial. There are not many contemporary watches of this type. Here are my top ten alternative chronograph watches which include some pieces no longer in production. The watch shown at the left here is the Chrono 4 by Eberhard, with subdials for minutes and hours (the first two), a 24-hour subdial, and small seconds. It was British watchmaker George Daniels who once said, when talking about design, “It starts with the dial, and it must not end up looking like a gas meter”. 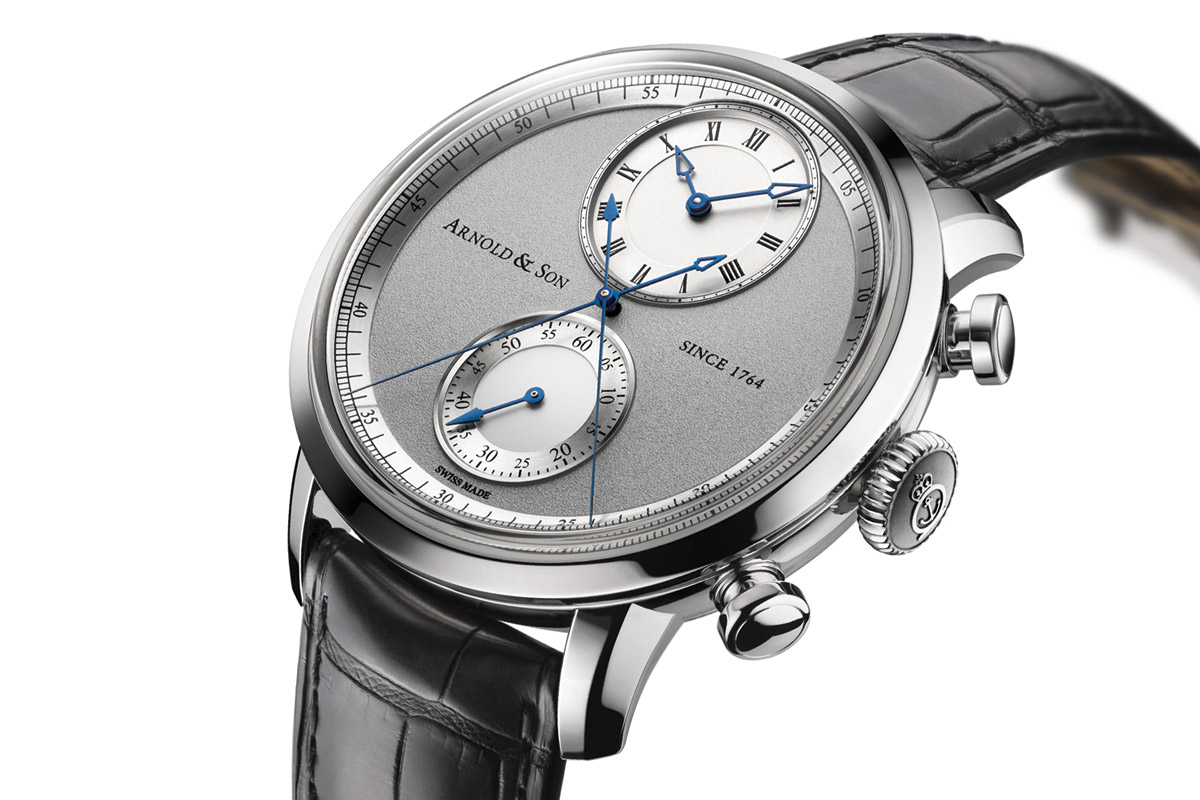 Arnold & Son presented the Instrument CTB (the acronym stands for Chronograph True Beat) at Baselworld 2014. The dial has a subdial at the top for hours and minutes, a subdial at the bottom for chronograph minutes (up to 60) and two second hands. One is the chronograph second hand, and so starts moving when you press the upper pusher, running at the usual sweep with 8 movements per second, corresponding to a movement rate of 4 Hertz, 28,000 beats per hour. The other hand is the continuous seconds hand, which is different from usual because it marks dead beat seconds, in other words it moves at one second intervals (like another Arnold & Son watch described here), so-called dead beat seconds. The A&S7103 automatic movement is housed in the 44 mm-diameter case with sapphire caseback, and it has a power reserve of 50 hours, less if you use the chronograph. Price from about €19,800. More info from the Arnold & Son website. 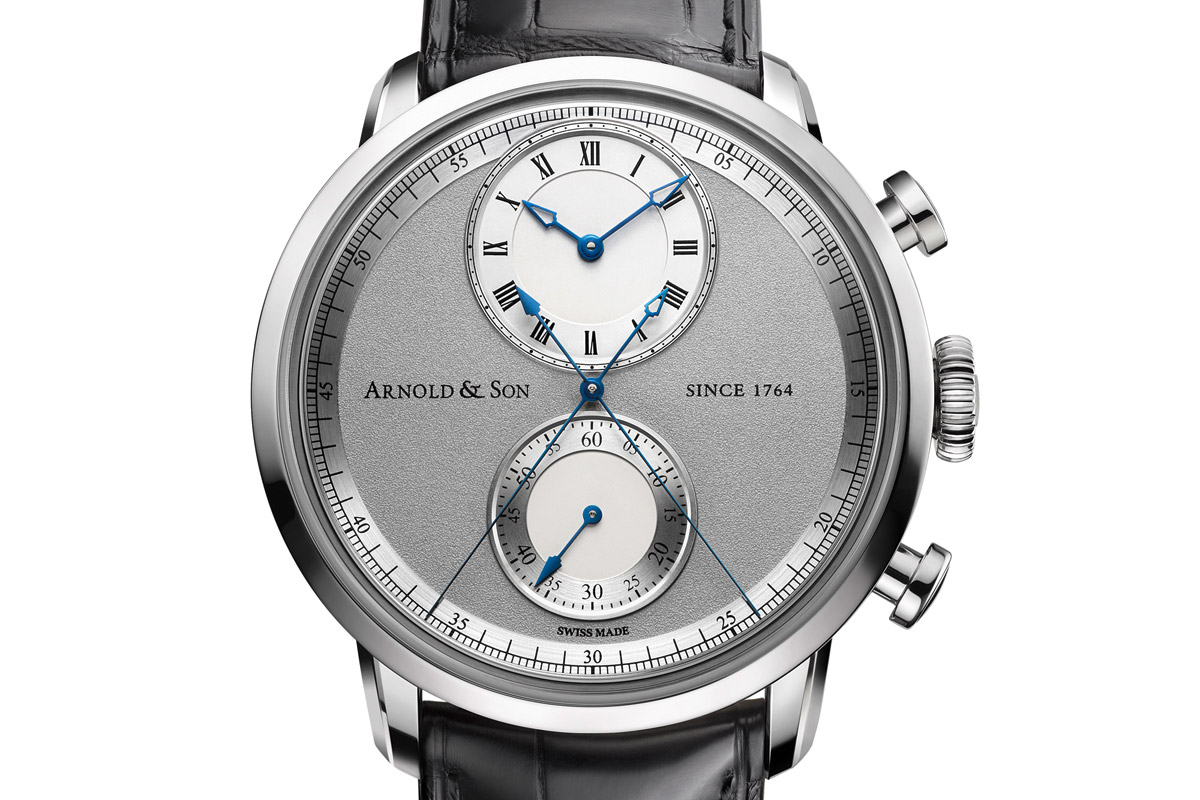 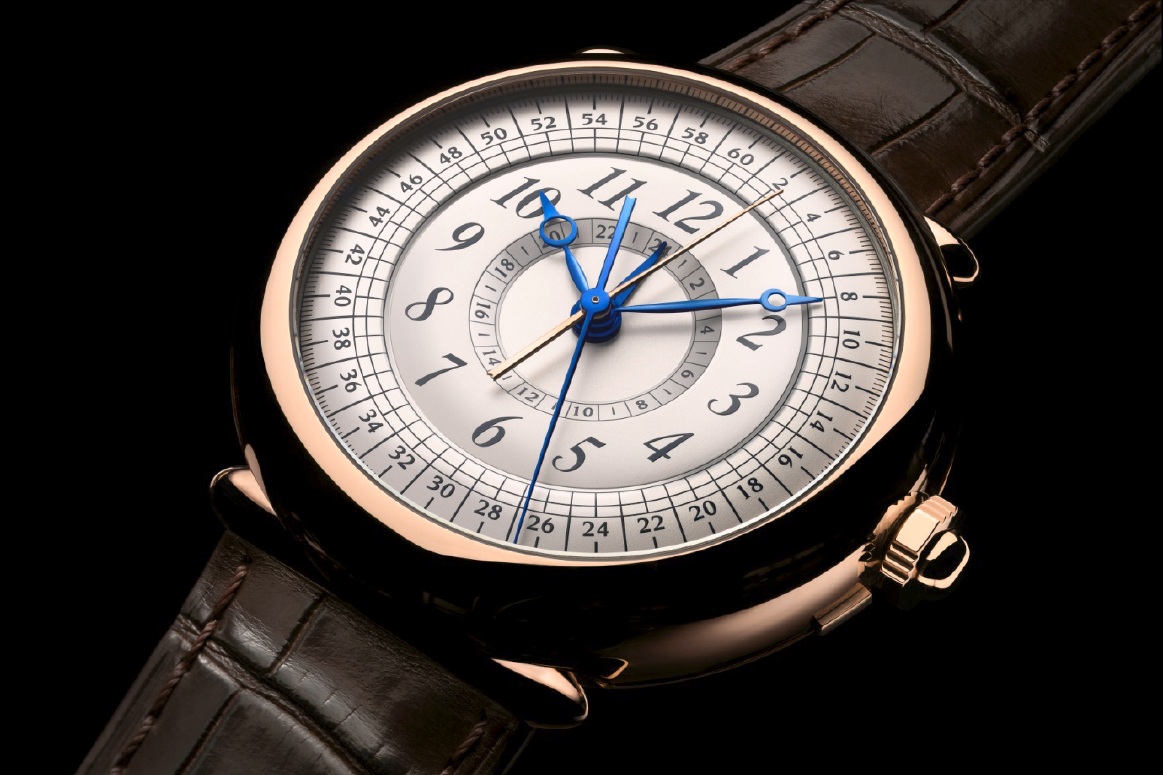 This watch has five central hands, two Breguet-type hands for hours and minutes, a short blue hand for counting up to 24 hours, a long gold chronograph minutes hand, and a long blued chronograph seconds hand. At first sight it looks as if it would be confusing to tell the difference between chronograph seconds and chronograph minutes hands, but fact each extends exactly to its corresponding scale, so there is no confusion at all. The dial is subtly curved with different levels to improve legibility. The chronograph is operated by a single pusher on the crown. The case, 46 mm in diameter, is in rose gold with the brand’s characteristic conical lugs. It has a double caseback, with an invisible hinge: the back cover can be opened by pressing the pusher at 4 o’clock, revealing the DB2039 movement with its tourbillon, steel bridges, and a chronograph system with three column wheels. The tourbillon beats at 36,000 vibrations per hour, making it fast and light – very light, just 0.18 grams. Info from the De Bethune website. 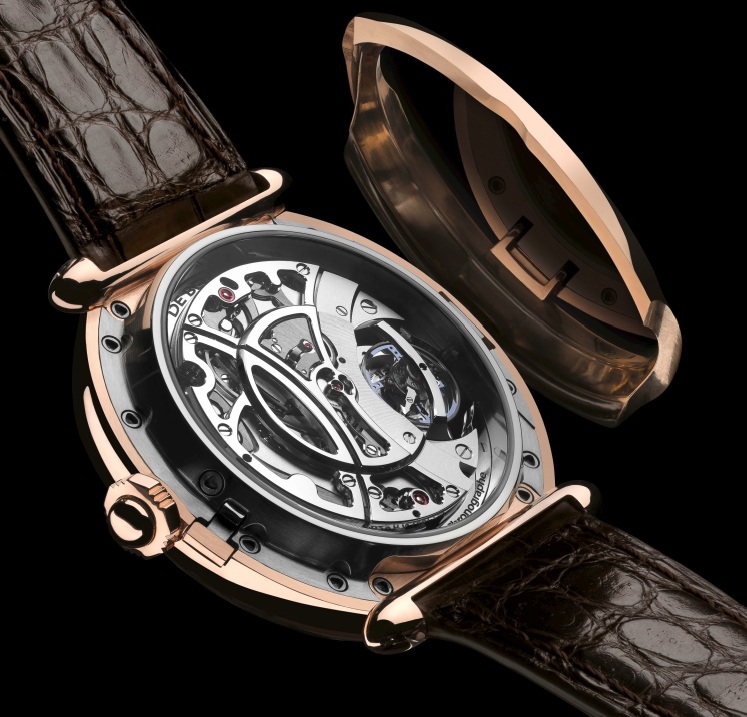 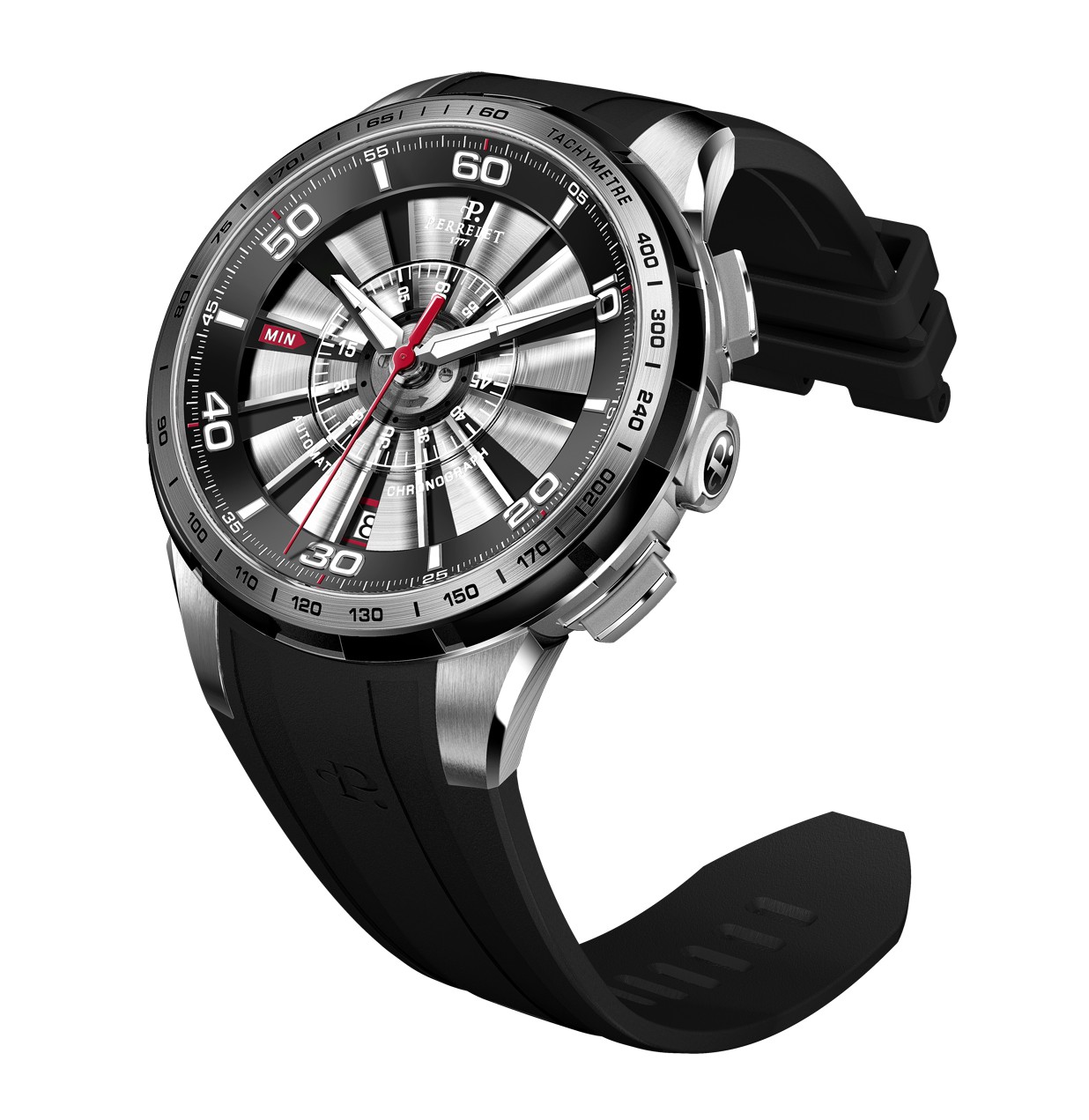 This watch features the characteristic Perrelet turbine-type winding rotor, and a chronograph display based on a conventional centre-sweep chronograph seconds hand and an unconventional minutes counter at the centre of the dial, with a transparent sapphire disc bearing the minute markings that slowly rotates against a fixed red arrow on another transparent disc. The watch is available in five versions, in three different shades of black and white, a pink gold model, and an all–black model. The case is 47 mm in diameter and 16 mm thick, with a transparent caseback through which the P-361 movement can be viewed. More info from www.perrelet.com 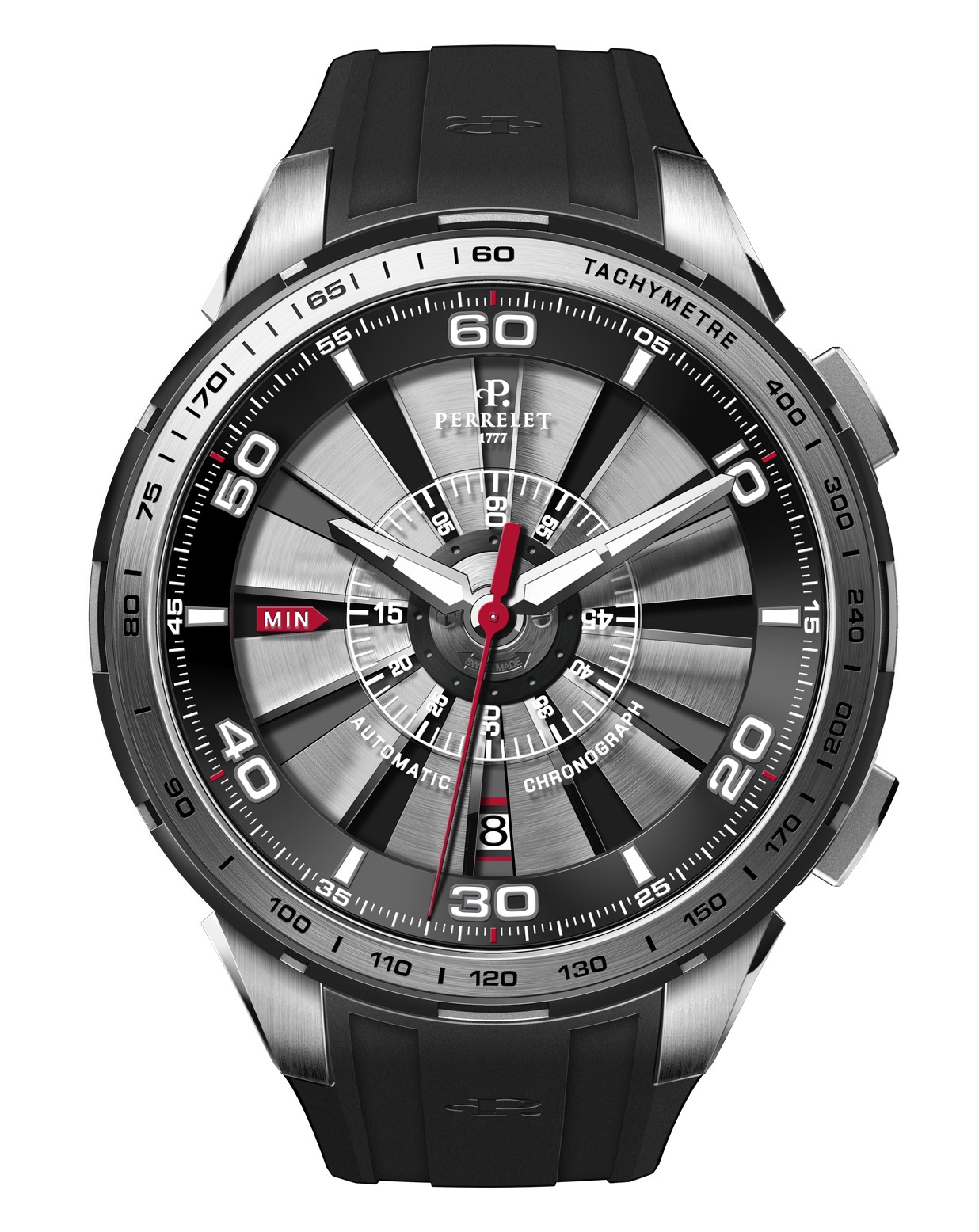 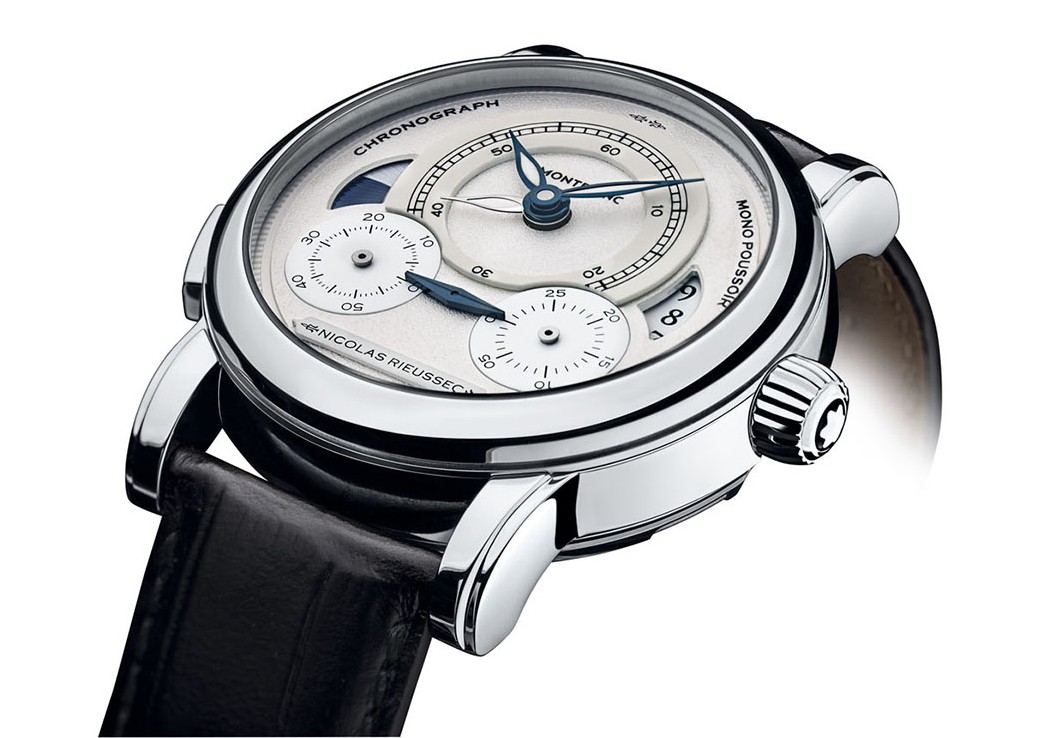 Nicolas Rieussec patented the world’s first chronograph in 1821, and this inspired Montblanc to make a chronograph based on the principle used in that historical piece, rotating discs on which a pen left a dot of ink. In this watch, chronograph time is displayed by two rotating discs, one for seconds, one for minutes, with a double-tipped index resembling the pen nib used on the original 1821 chronograph. The result is perfect legibility, because the hour and minute indications are on the top subdial. There are some other interesting characteristics about this watch, such as hour-indicating digits in SuperLuminova embedded into the white ceramic, so that the watch transforms when light levels drop. In addition, a skeletonized hand on the dial provides a second time zone; the indicator at nine o’clock is a day/night display for the second time zone, and this is balanced by a date indicator at 3 o’clock. The chronograph is a monopusher, powered by the MB R200 movement, with 72 hours power reserve. Lots of great design. Available in rose gold as a limited edition of 193 watches, and in stainless steel limited to 565 pieces. www.montblanc.com 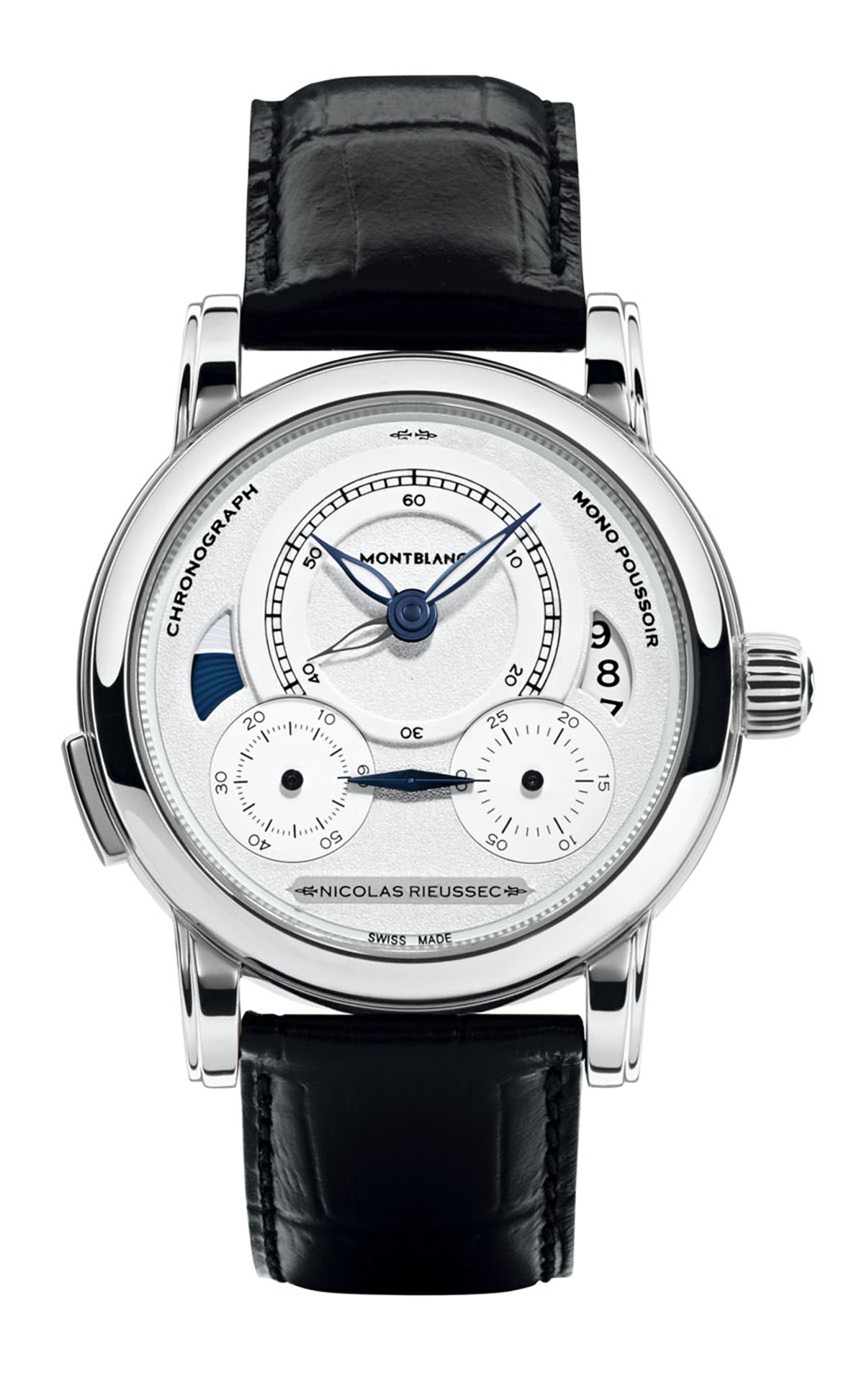 Below, the SuperLuminova numerals that appear in low light levels. They are embedded into the white ceramic of the dial. 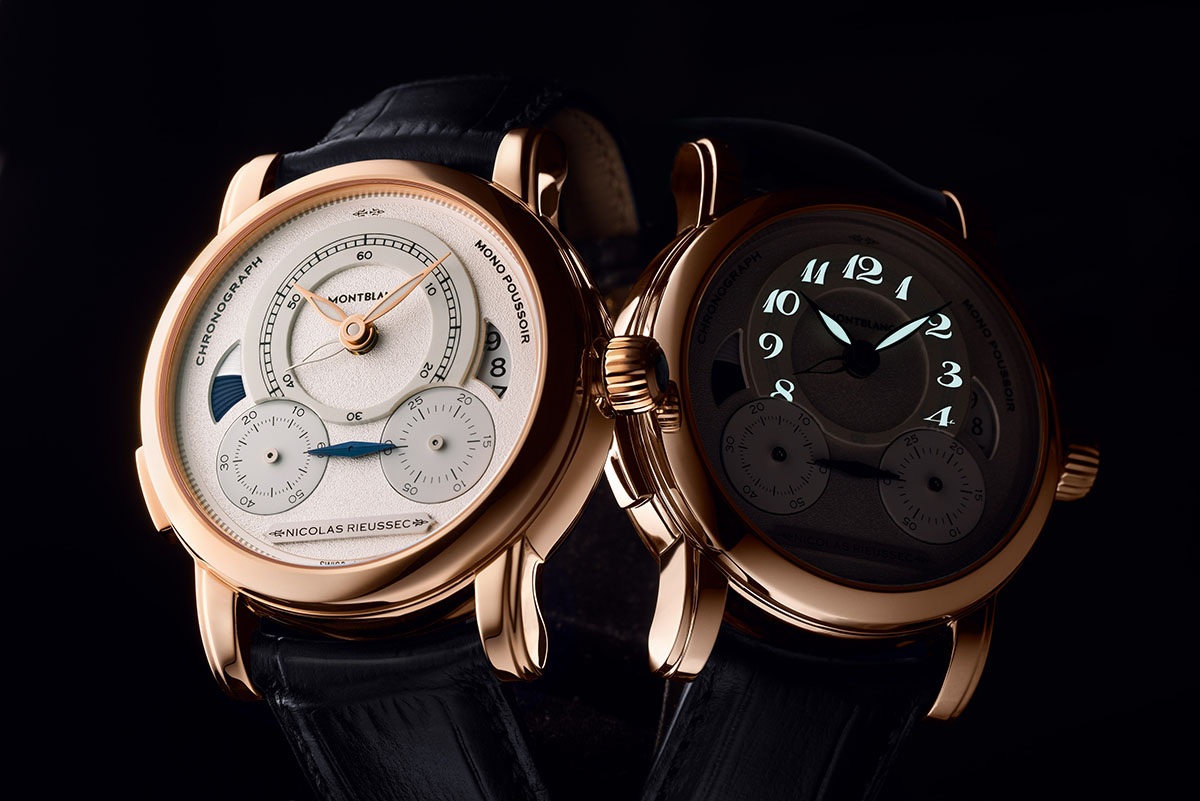 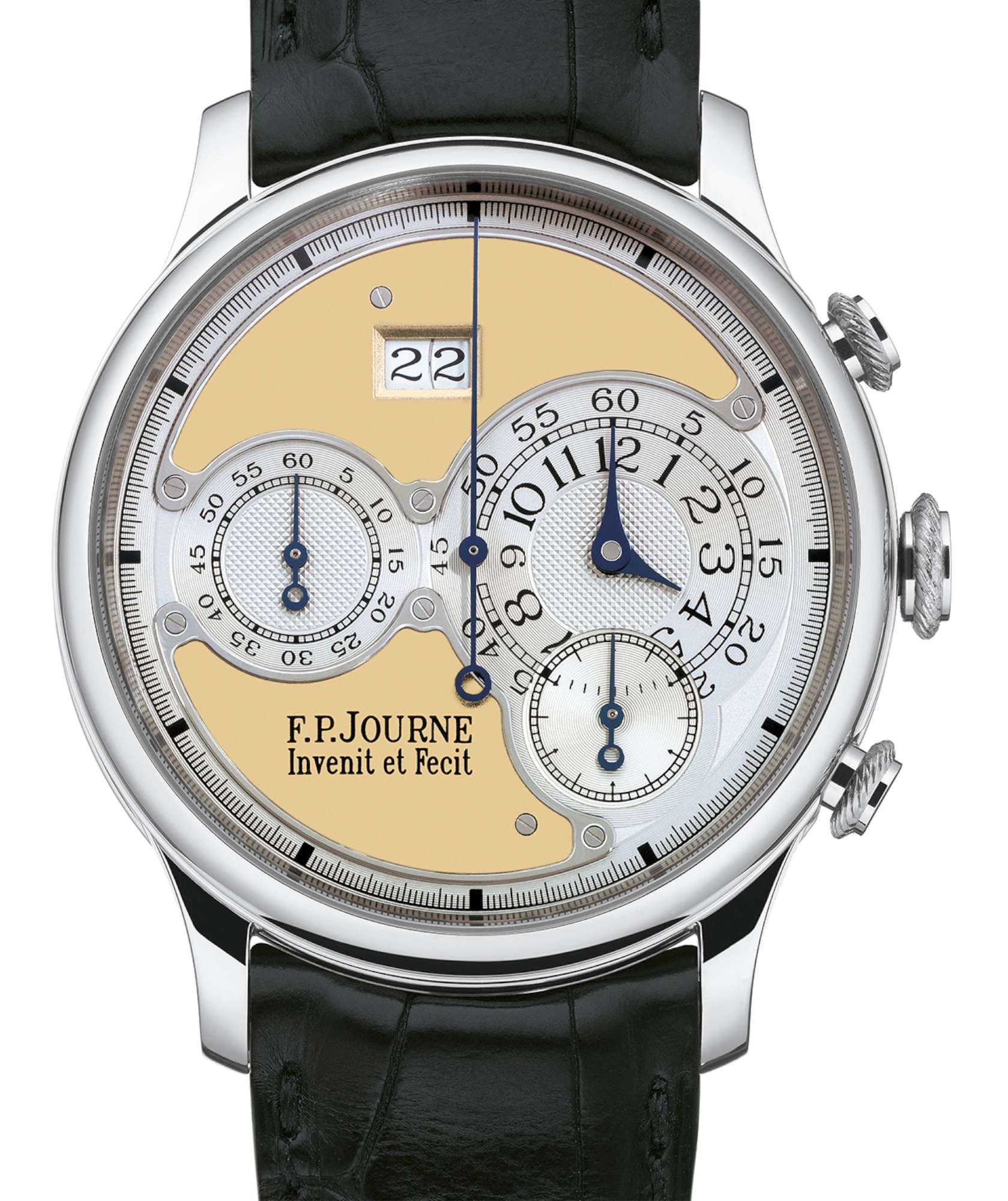 Perfect legibility, hours and minutes on a subdial at 3 o’clock, continuous seconds below that, chronograph minutes at 9 o’clock, a nice large central sweep chronograph seconds hand, large date. The piece has that asymmetric fascination that François-Paul Journe achieves so brilliantly, analogous to that of A. Lange & Söhne and a few other brands. www.fpjourne.com 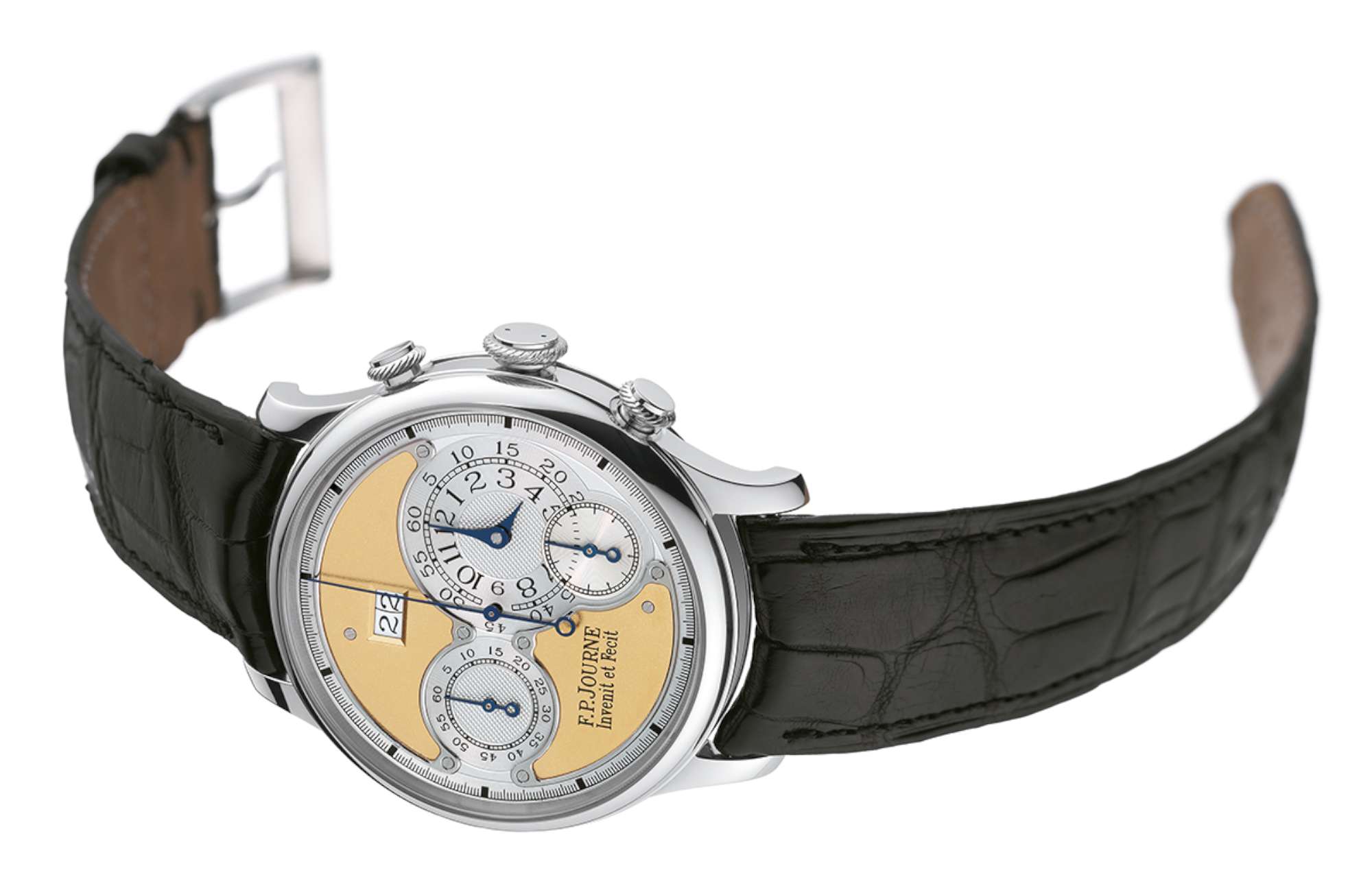 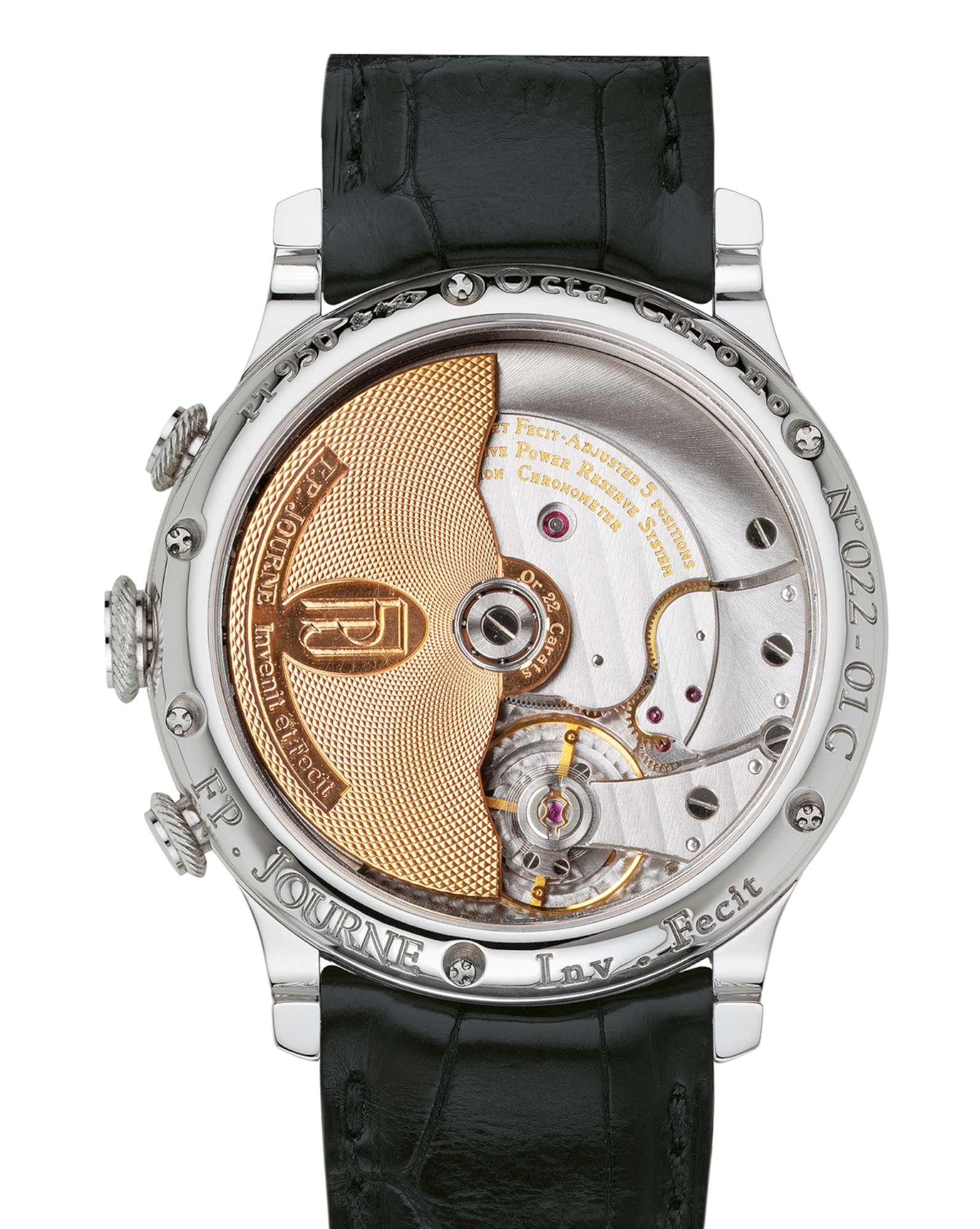 This watch is part of the Patek Philippe 175th anniversary celebrations for which the brand created a whole series of special models. This piece looks complicated, but in actual fact it has just a chronograph seconds hand which can be used with three logarithmic scales to calculate speeds, distances and heartbeat per minute, exactly as mechanical watches were used by professionals up until the 1960s. The pulsimeter scale is calibrated for 15 seconds: the doctor just has to feel the pulse, start the chronograph on the first beat and stop it on the fifteenth, and then read the pulse rate directly. The tachymeter scale is calibrated for 1,000 metres, for example the kilometer signs on the motorways of some countries that enable a car passenger to calculate the average speed over that kilometer. The telemeter scale can be used to read off the distance from a gun or a strike of lightning. The watch, with the specially-developed CH 28-520 movement, is unusual because the sweep chronograph hand can also be used as a continuous seconds hand (simply by leaving the chronograph running). The 5975 is available in three series each of 400 pieces for men, in yellow, white and rose gold, a series of 100 in platinum, and another of 150 for women, with baguette diamond hour markers. The men’s version is in a case 40 mm in diameter, the women’s 30 mm. www.patek.com 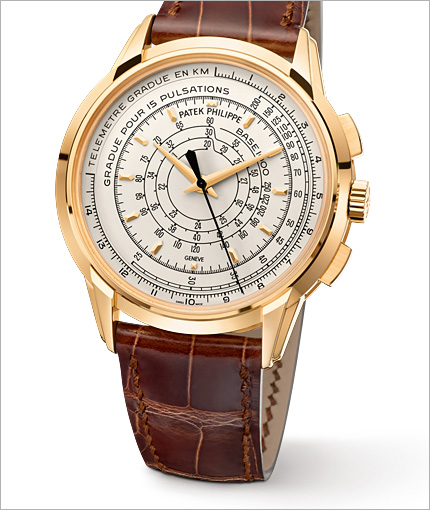 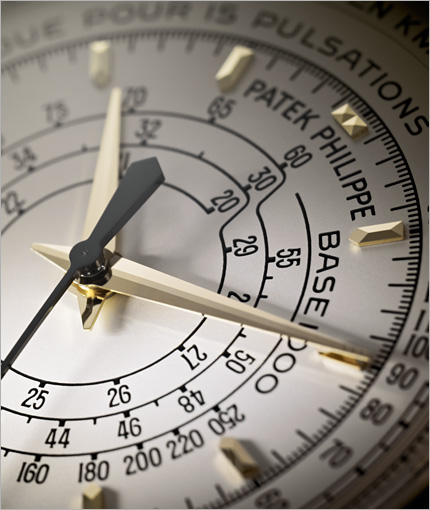 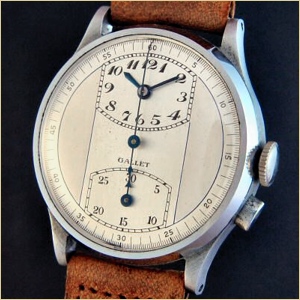 A watch introduced by Gallet in 1929, with a single pusher controlling the chronograph. Time functions above, chronograph minutes below, a large, slender centre sweep chronograph seconds hand. Image courtesy of www.galletworld.com 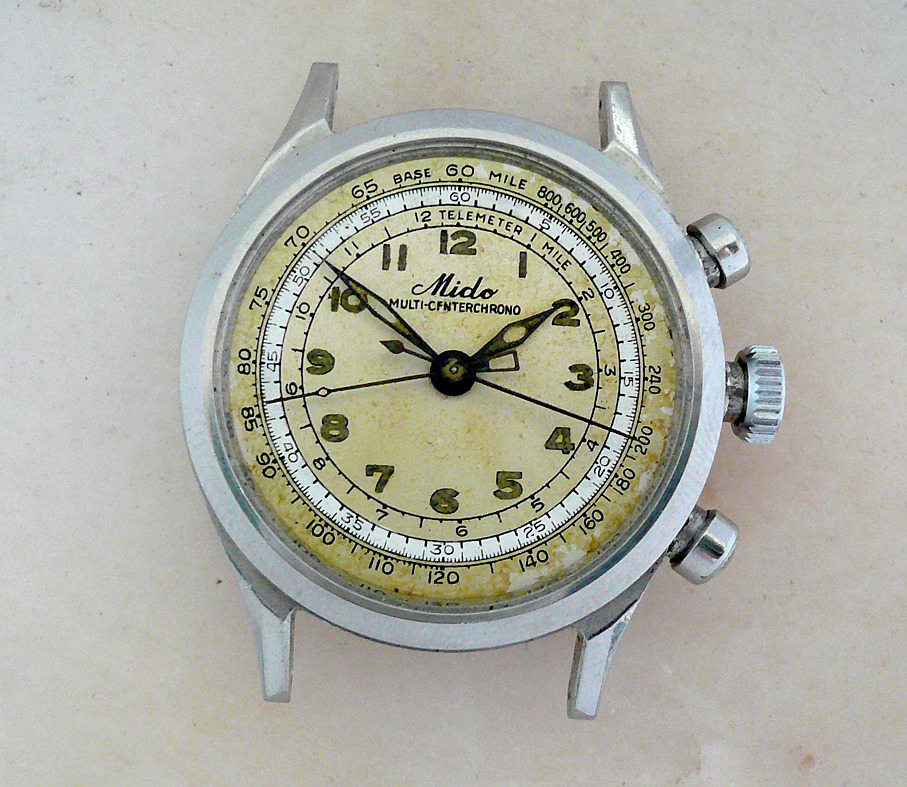 A watch with telemeter and tachymeter scales, and chronograph second and minute hands both centre sweep. Image courtesy of omegaforums.net 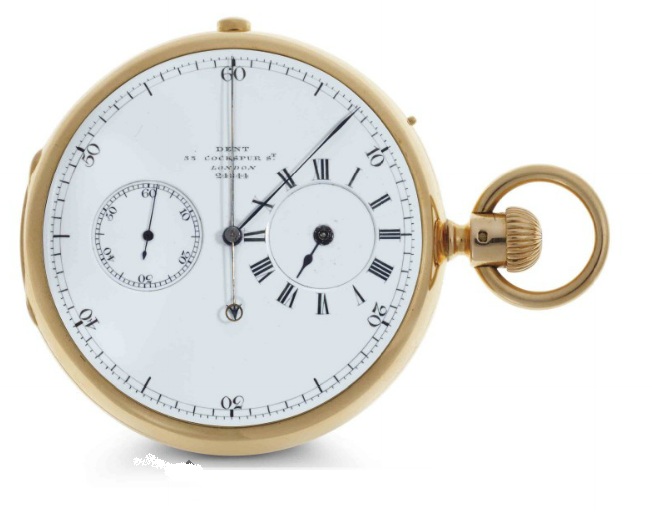 A watch made in about 1860 in London by Dent, in gold, with central sweep seconds and minutes hands, small seconds on the left, time functions on the right. The pusher is at the top, the crown on the right, an interesting and unusual layout. Image courtesy of www.christies.com, the watch was sold for $5,250 in New York in 2011. 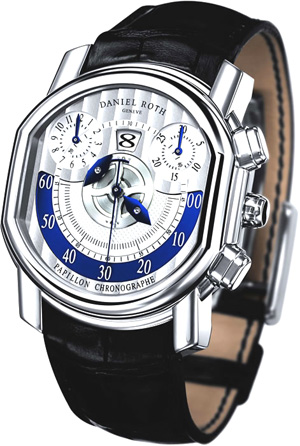 The Papillon Chronograph Watch by Daniel Roth was launched in 2008 and it immediately became a classic, with its very unusual indications. The time is shown in the central part of the watch, with digital jumping hours in the squarish window, and minutes shown by the blued hands on the circular disc. One of the hands starts at 00 and rotates to the 60 position in an hour. When it gets there, it rotates through 90° and lies parallel with the circumference, while the other, which has now reached 00, also rotates and takes over minutes indication for the next hour. So it looks like a retrograde mechanism, but it’s not. The chronograph subdials are at the top of the watch, a 30-minute counter on the right and an hour counter on the left, with a centre-sweep chronograph seconds hand. Resetting the chronograph seconds hand puts it into the position shown in the photo, pointing down, so as not to mar visibility of the hour window. The watch is powered by an automatic column-wheel chronograph movement, the Frederic Piguet Calibre 1185, with extra modules designed by Daniel Roth for the pivoting minute hands. The case, in the characteristic Daniel Roth shape, is in yellow, white or red gold, 43 x 46 mm, with a sapphire caseback. The story of Daniel Roth is fascinating: read about his life and work in this article on another blog.