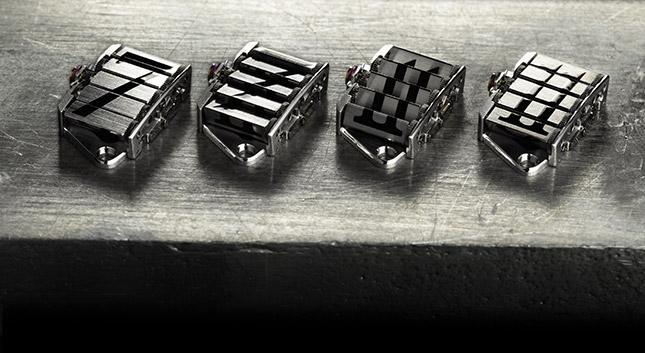 As a prism has three faces, if you want to use a block of prisms to display a number, you can only display three numbers with one set of prisms. If there are 12 numbers, you need four blocks of prisms. That’s what MCT, Manufacture Contemporaine du Temps, did with Sequential One, and now with Sequential Two, presented at Baselworld 2014. The hours are shown on four modules, each of which comprises five prisms. The hour in question is highlighted by a C-shaped arc that reveals one of the modules at the open part of the C, and hides the others. The next module gradually changes to the next hour, so that on the hour the C-element rotates and the new hour is ready. The minutes are shown by a hand with the customary scale at the edge of the dial. 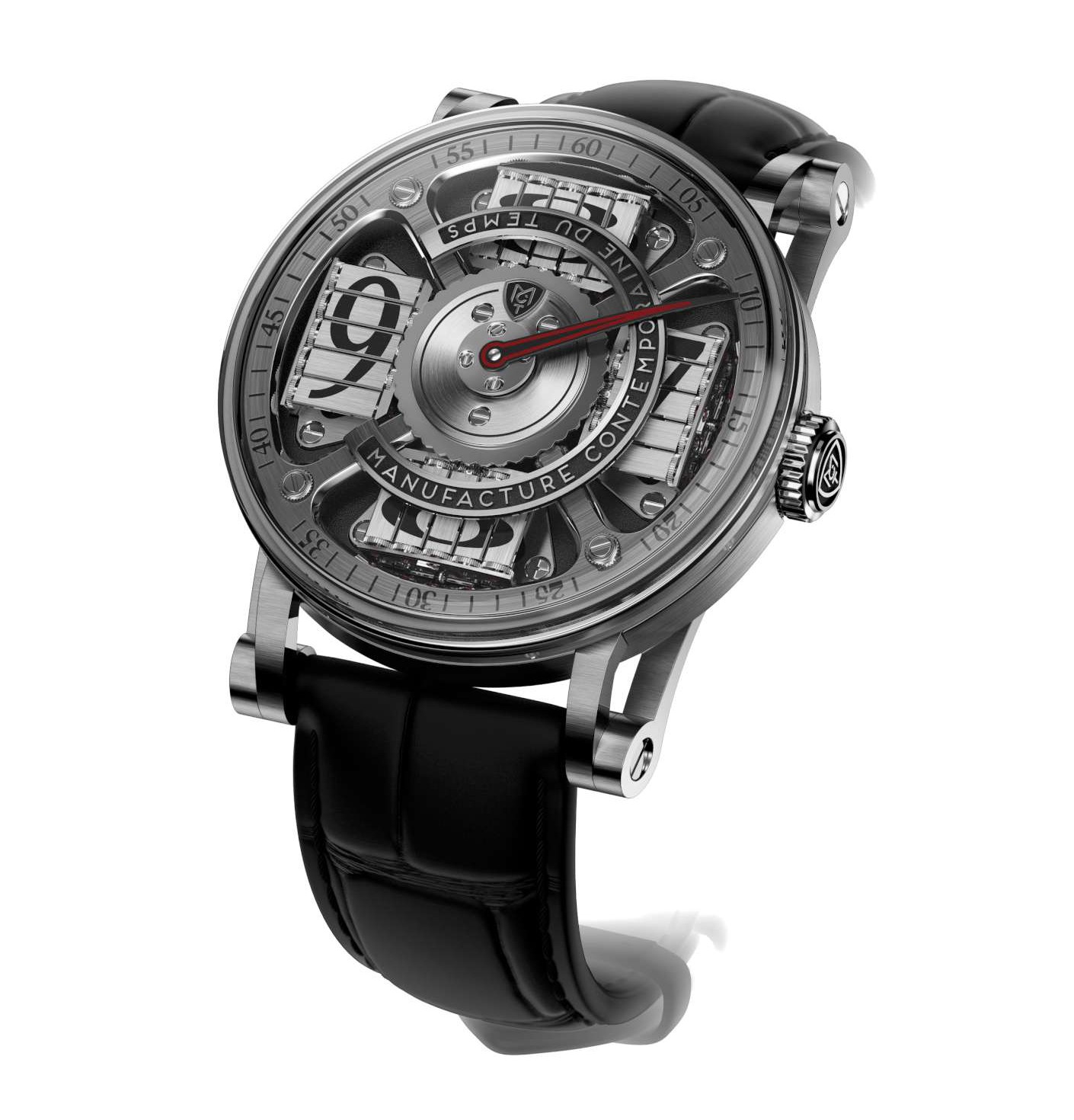 The watch is powered by an in-house movement (MCT-S2), visible through the caseback, with a gold rotor contrasting with the black-finished bridges. Not surprisingly, it’s a complex assembly, with 507 components, and a power reserve of 40 hours. The case is large at 44.6 mm diameter, 14.5 mm height, in gold: a nice feature is the sapphire band on the caseband, which lets light into the movement. Another interesting touch is the lack of a bezel: the watchglass goes right to the edge, highlighting the ingenious mechanism. The Sequential One, presented in 2009, was designed by Denis Giguet, who subsequently left MCT and moved to Van Cleef & Arpels. Sequential Two was designed by Fabrice Gonet. Price about €79,000. Further information from the MCT website.

Below, the lugs are also characteristic and compact: 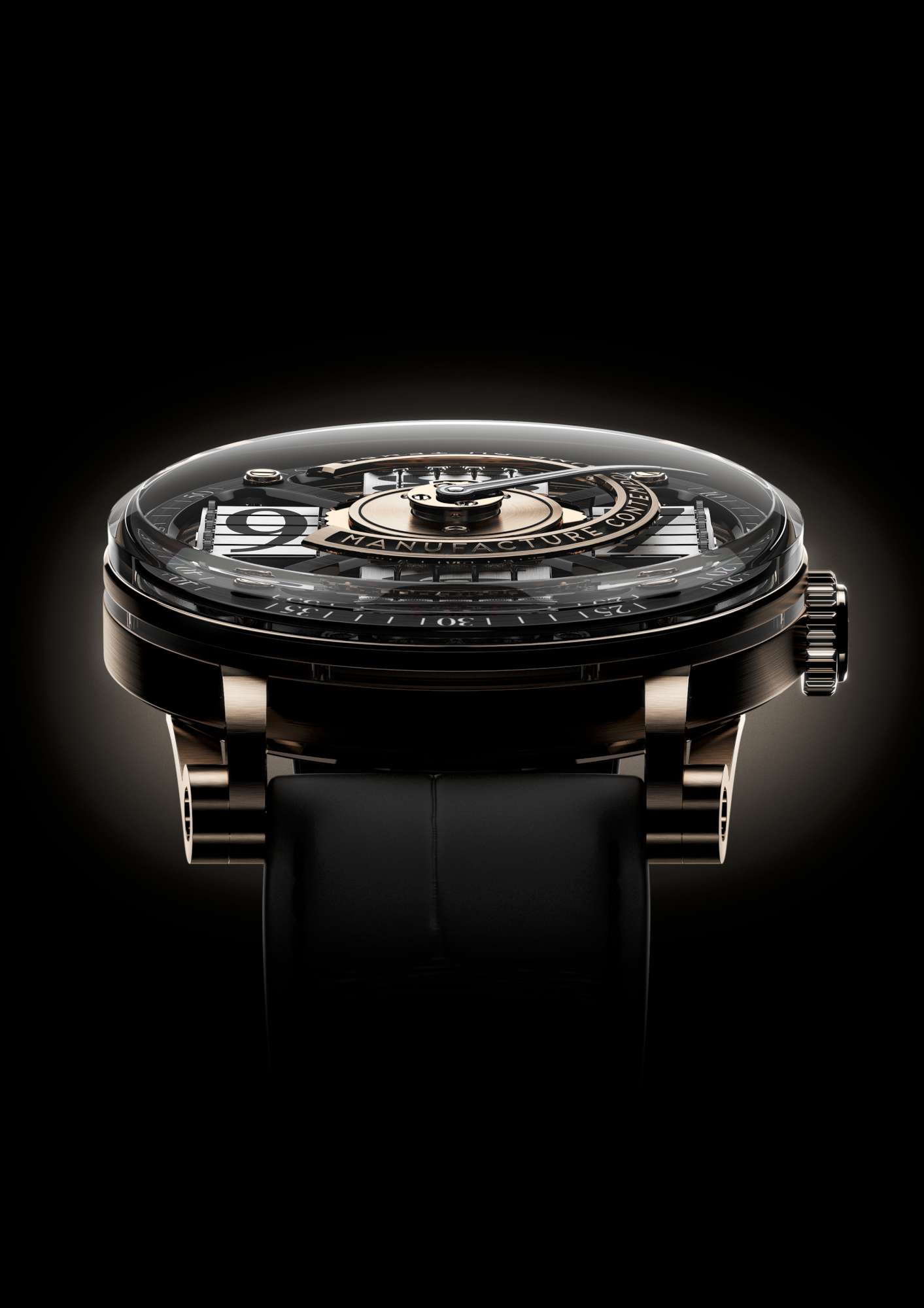 Below, the version in red gold: 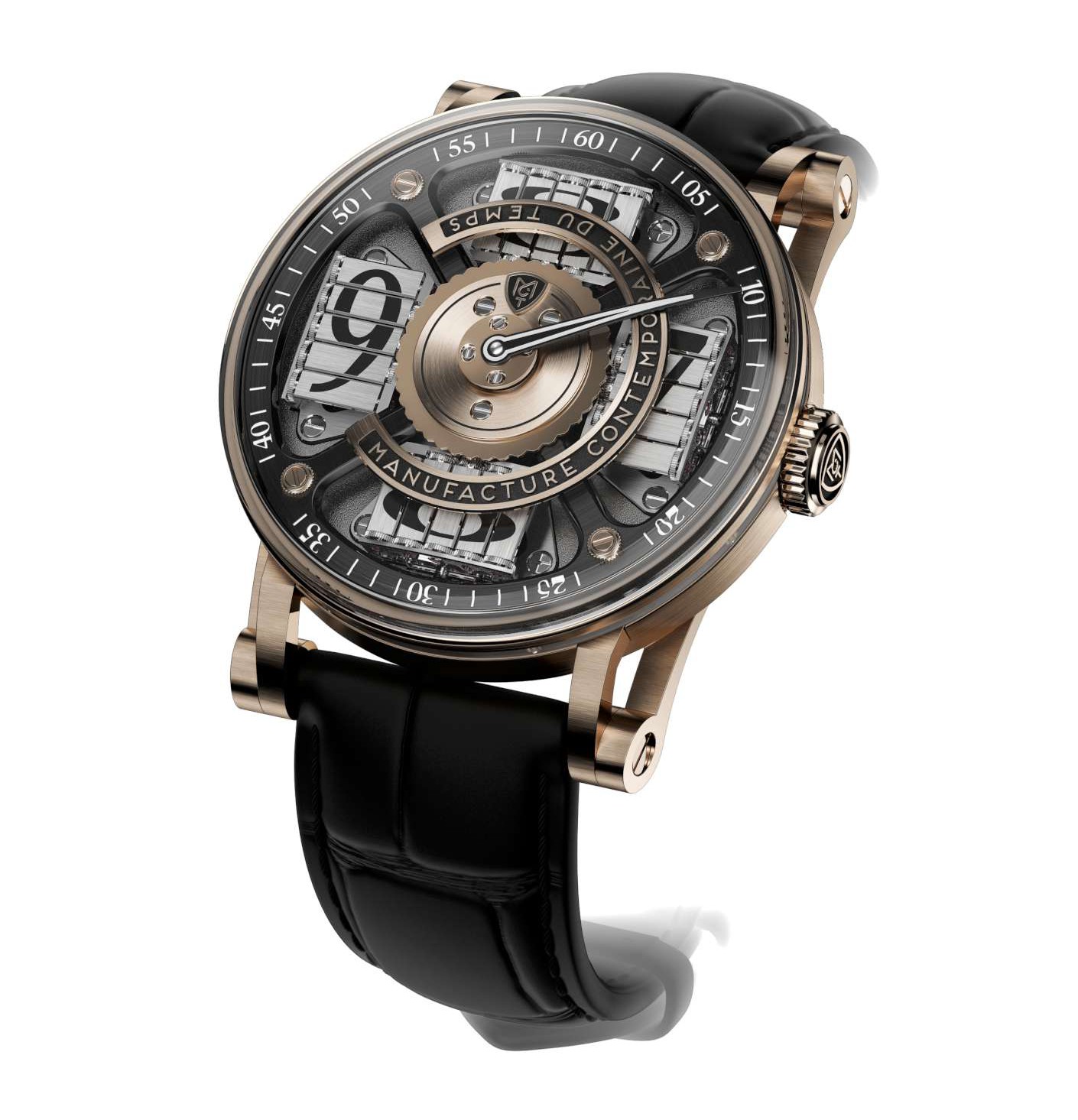 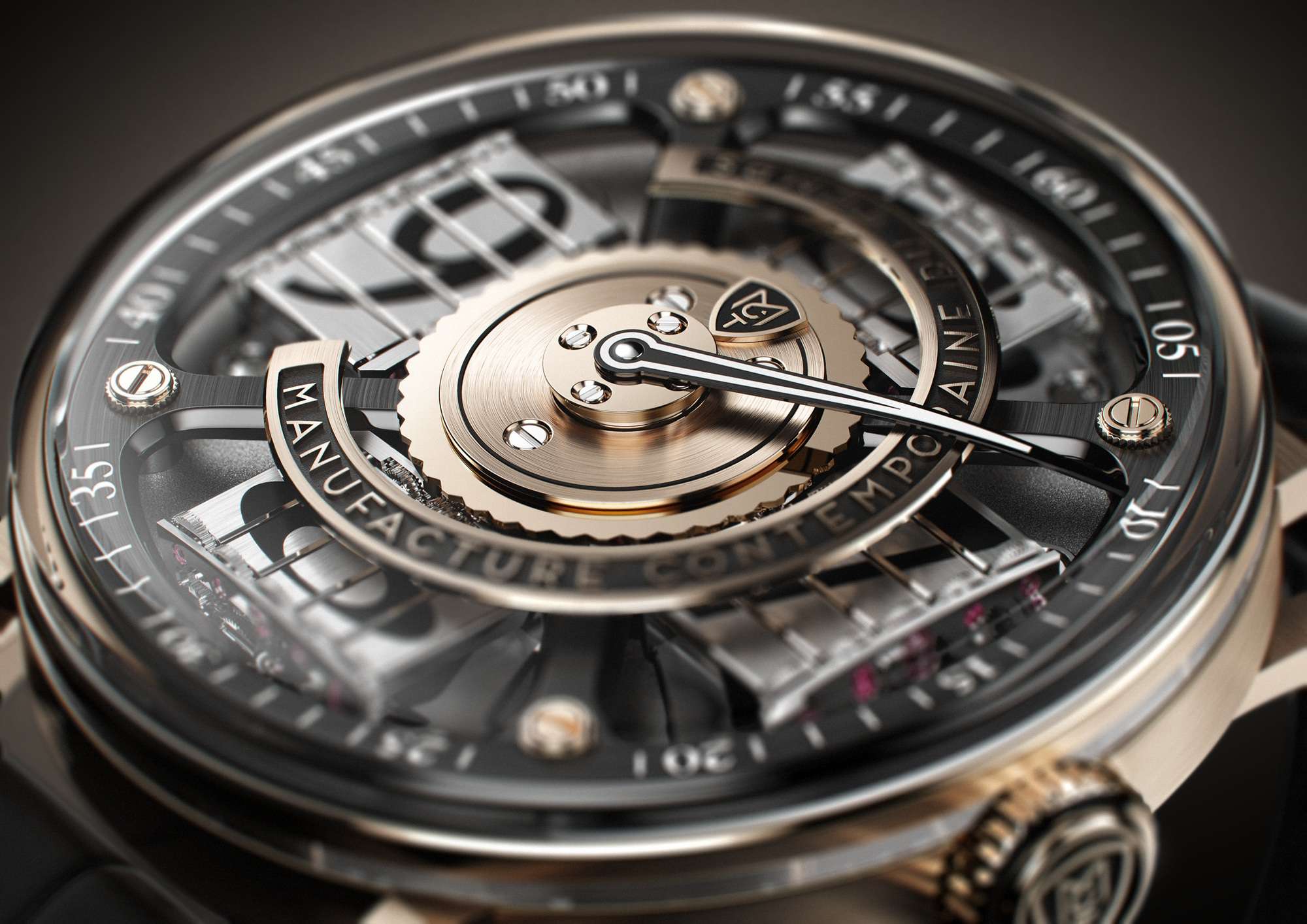 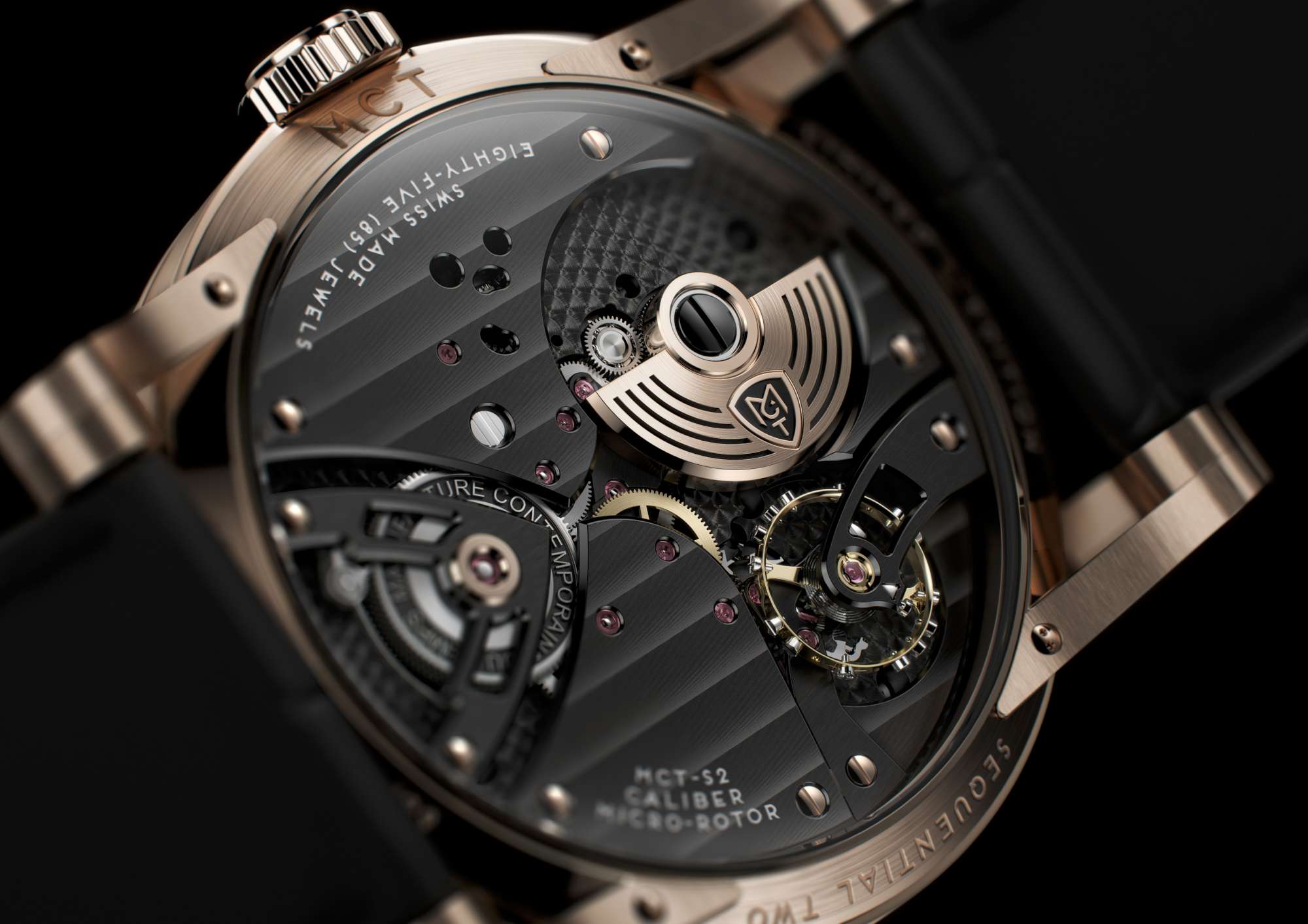 Below, side view, showing the watchglass without a bezel, and the sapphire strip in the caseband that admits light into the movement.