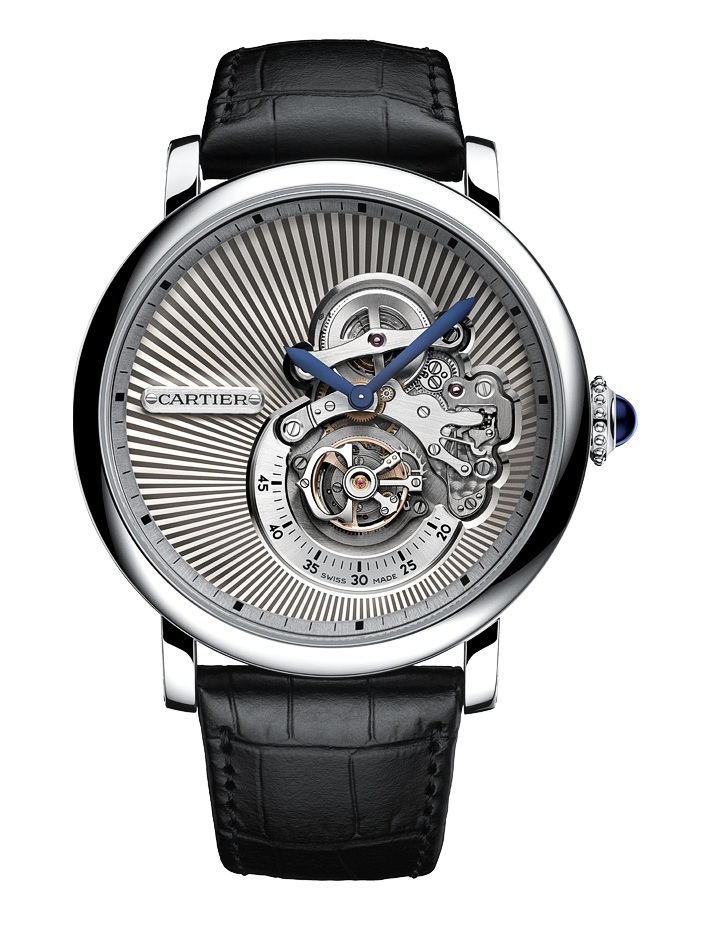 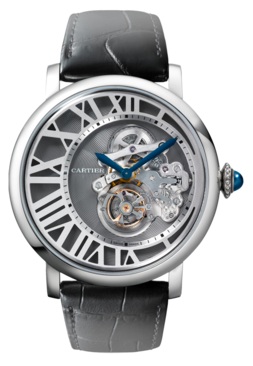 The 2012 version of the Rotonde de Cartier Reversed Tourbillon

The Rotonde de Cartier Reversed Tourbillon is one of the pieces that Cartier will present at SIHH 2015 in Geneva from 19 January 2015. Its principal feature is the deeply-cut guilloché work on the white gold dial, something that bears comparison with Richard Mille. The previous version of this watch, presented in 2012, had a similar design, but with large stylized Roman numerals instead of the guilloché. In this new piece, the dial is again asymmetric, with the guilloché not centred but radiating from the tourbillon, where the large C on the tourbillon bridge rotates and marks the seconds on a half-scale. The hour and minute hands are also off-centred, and the minutes scale and hour markers on the inside of the bezel are calibrated to match. So, for example, the 12 o’clock marker is right of centre, and the minute scale is wider on the left-hand side of the dial than the right.

In this movement, parts of the top plate have been eliminated so that we can see more than just the tourbillon. Above the pivot for the hour and minute hands is the barrel, with the spring visible, and just below this are the wheels of the gear train. The result is an open architecture with more depth than appears in the photographs.

When you turn over, you see through a sapphire caseback, but the view is principally of the Côtes de Genève stripes on the baseplate. The movement is the Cartier Calibre 9458, with 167 components: it is manually-wound, with a power reserve of 52 hours. The price of the new Rotonde de Cartier Reversed Tourbillon will be just over €100,000.

Cartier continues to offer remarkable surprises in its watches, and many of them bear the mark of Carole Forestier-Kasapi, Director of Movement Creation at Cartier since 2005. She particularly likes working with three-dimensional characteristics as revealed in the Astrocalendaire Perpetual Calendar with its amphitheatre look. The new piece has some of the Cartier hallmarks, such as the cabochon on the crown and the blued hands, while some have been omitted, such as the Roman numerals and railway track index. 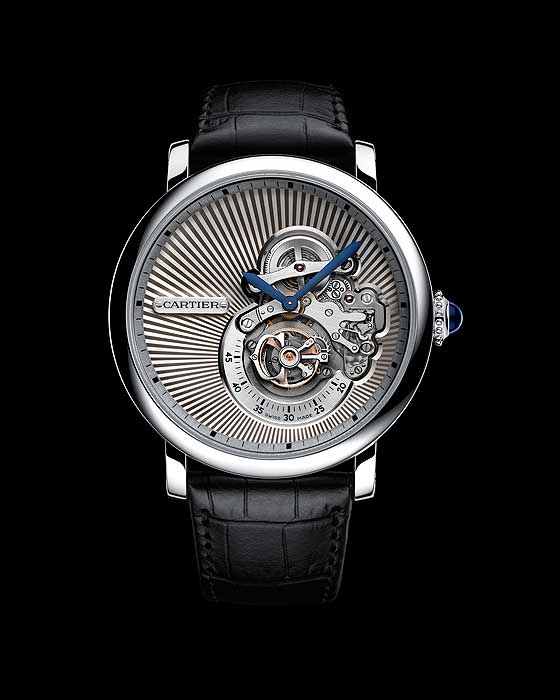 Below, view through the sapphire caseback: 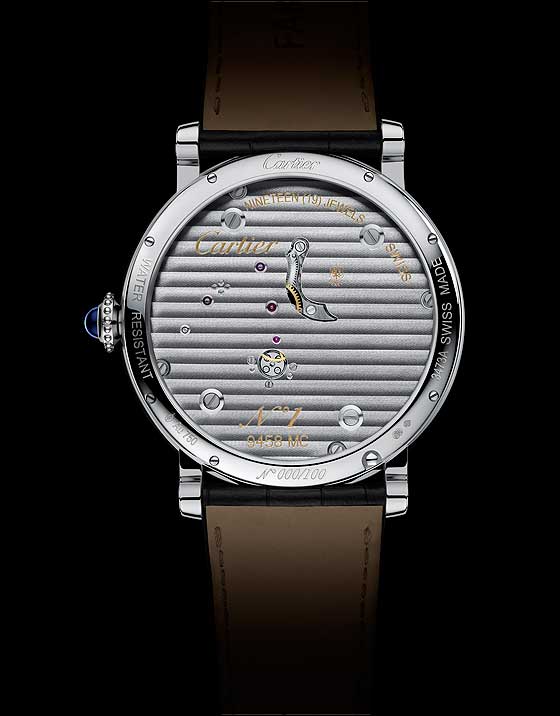 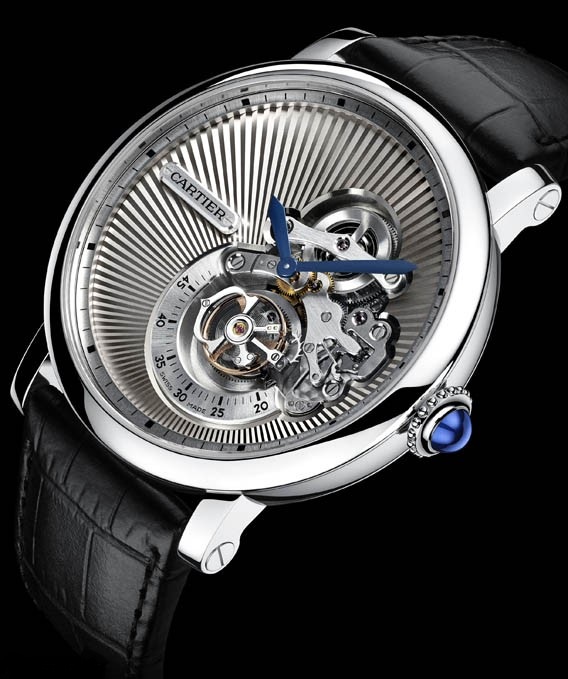 Below, detail showing the tourbillon, the barrel above the hour and minute hands, and some of the wheels of the gear train: 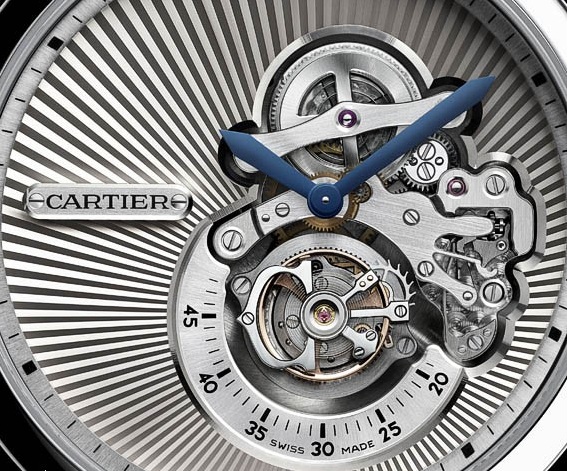 Below, the dial side of the movement: 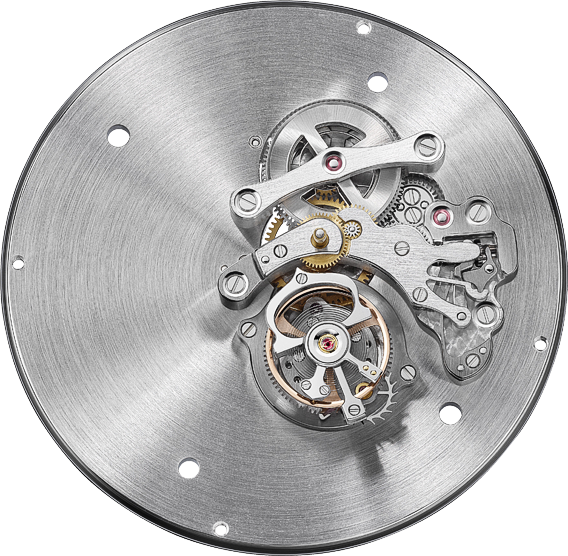