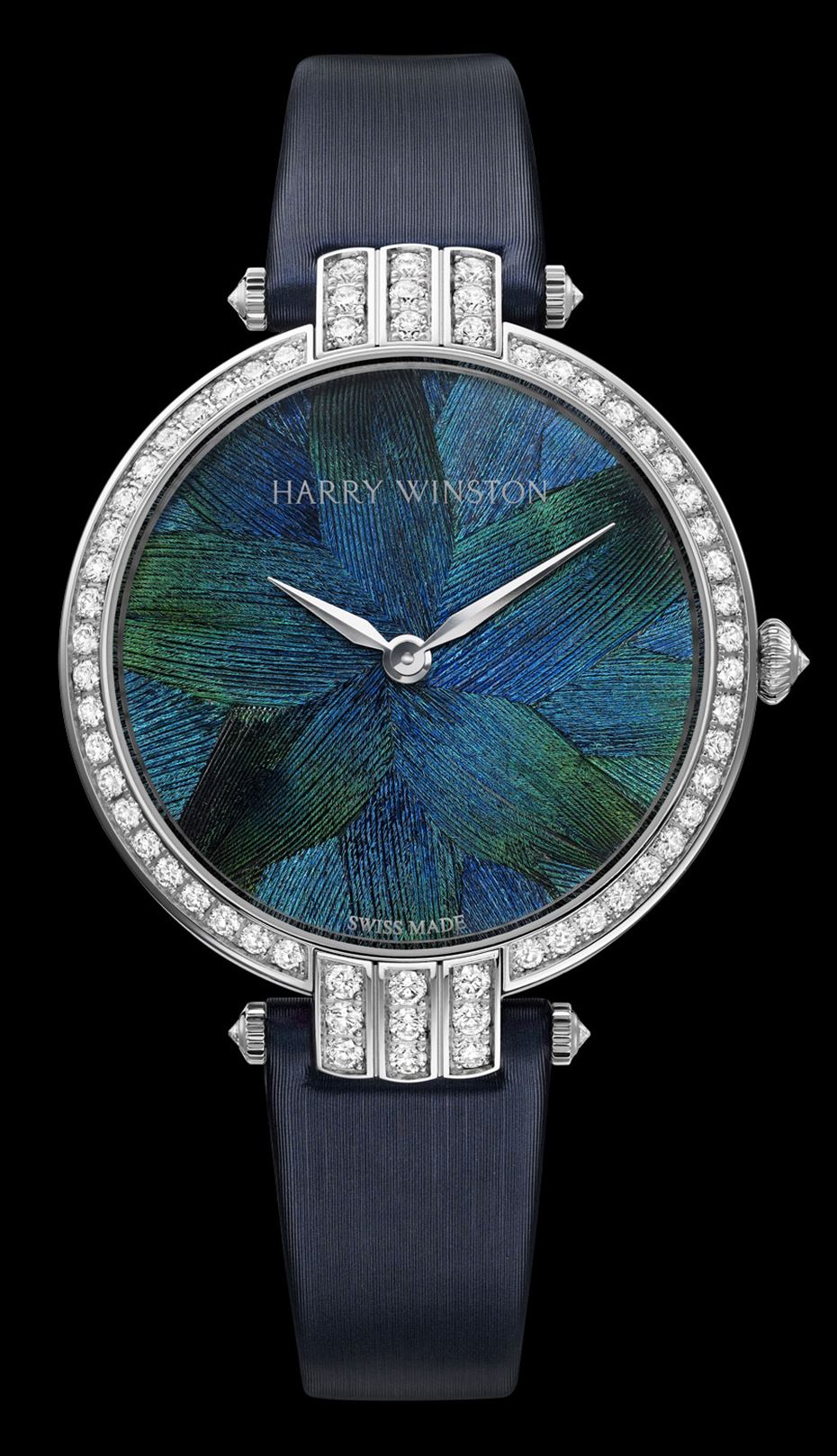 Premier Feathers, a women’s watch introduced by Harry Winston in 2012

Baselworld is still three months away (19-26 March 2015), but some brands are already presenting previews of what they will be showcasing at the world’s largest watch fair. Three years ago, with its Premier Feathers collection, Harry Winston introduced the art of plumasserie – marquetry using feathers – on the dials of its Premier Feather watches for women, in which ethically sourced feathers are carefully arranged by a specialist in this art, Nelly Saunier, to create an unusual decorative effect, with some patterns and colours based on those of the feathers themselves, and some specially coloured. They are combined with the Harry Winston speciality, diamonds, and a quartz movement, to create slim 36 mm women’s watches, priced at around €53,500.

At Baselworld 2015, Harry Winston’s new products will include Midnight Feathers Automatic 42 mm, in which the same art is applied to watches for men, with a case 42.5 mm in diameter and 9.1 mm thick. The preview watch has a dial made from domestic goose feathers dyed brown and black and assembled on the dial to create a vertically striped pattern that provides a fine visual match for the pink gold case and the brown alligator strap. The lettering “Harry Winston” and “Swiss made” is applied to inside the watchglass and not to the dial itself. The bezel is attractively chamfered outwards, and includes the three trademark dentels at the three o’clock position, a reference to an architectural feature of Harry Winston’s boutique on Fifth Avenue, New York. The lugs are short, and integrated with the case by fluting. The sapphire display caseback reveals the automatic movement, with Côtes de Genève paraboliques decoration on the bridge, and a skeletonized movement that provides a good view. The movement is the HW2008, with 186 components including the rotor in white gold. More information at http://www.harrywinston.com/

The materials used for dials now include a variety of substances, such as meteorite rock as in a Jaeger-LeCoultre piece that will be presented at SIHH in January 2015, metal from the Statue of Liberty in a piece by Romain Jerome, wood marquetry by Parmigiani Fleurier, flower petals in watches by Cartier, and more unusual substances such as the fossilized dinosaur dung that features in a watch by Artya presented in 2010. 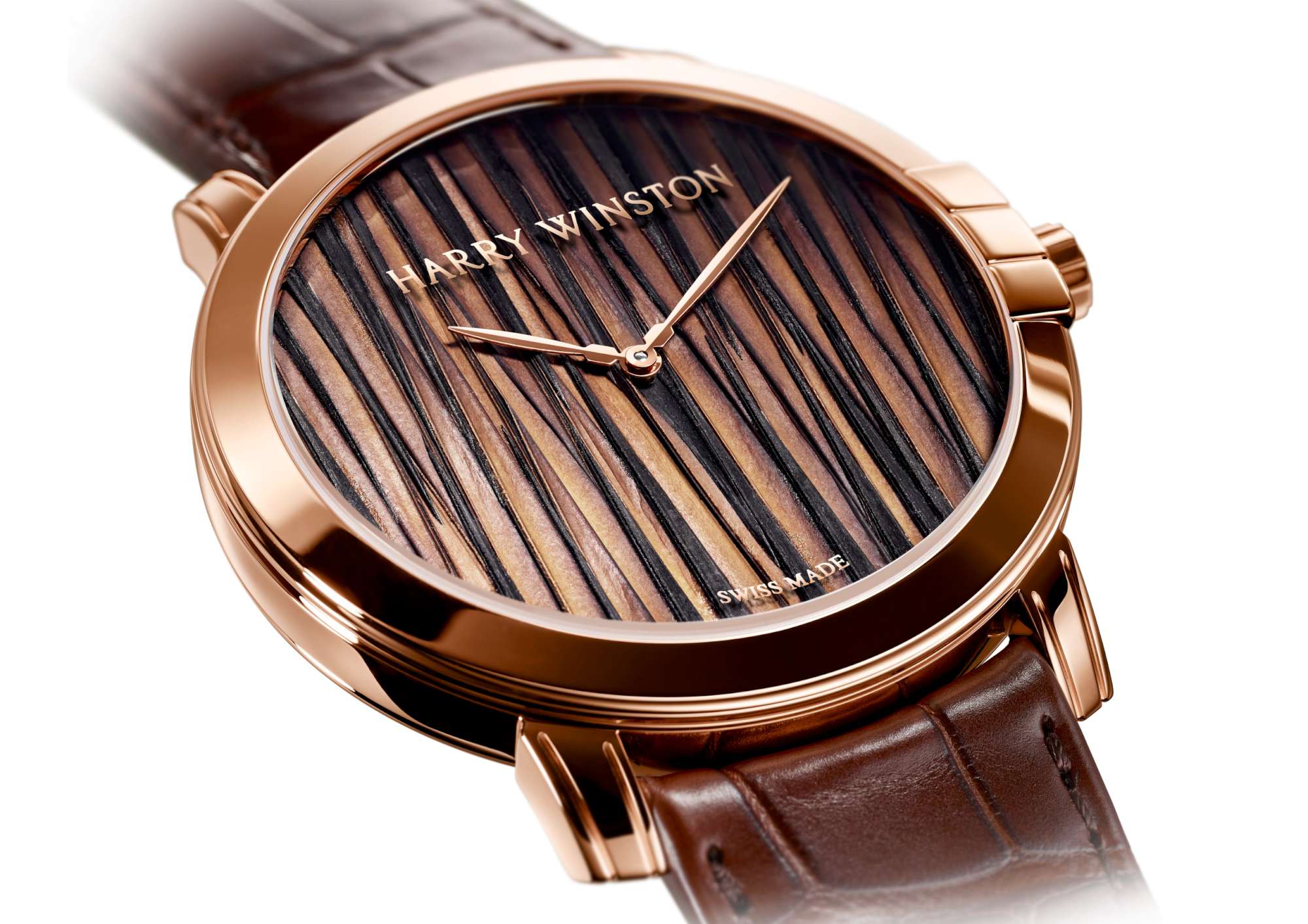 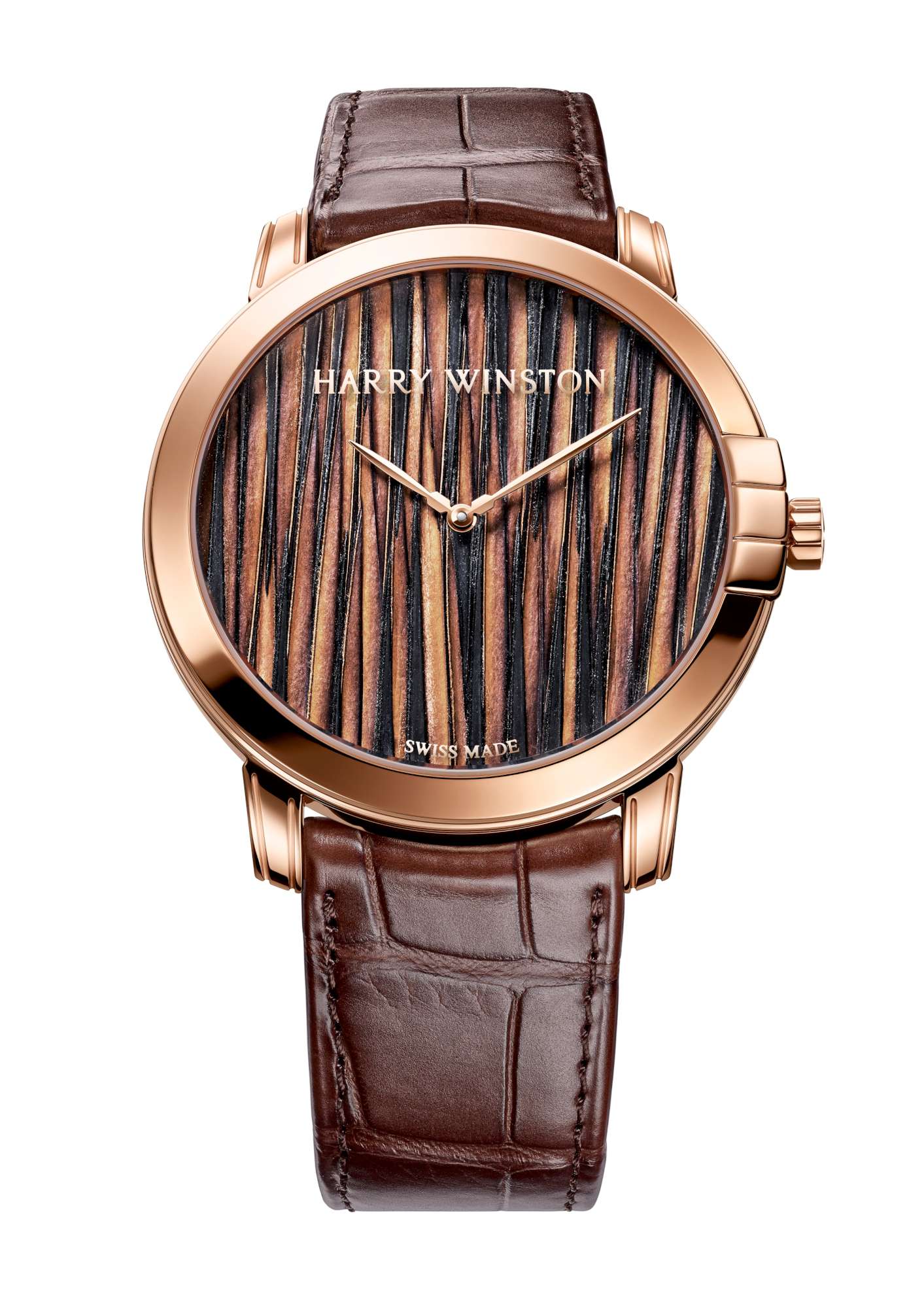 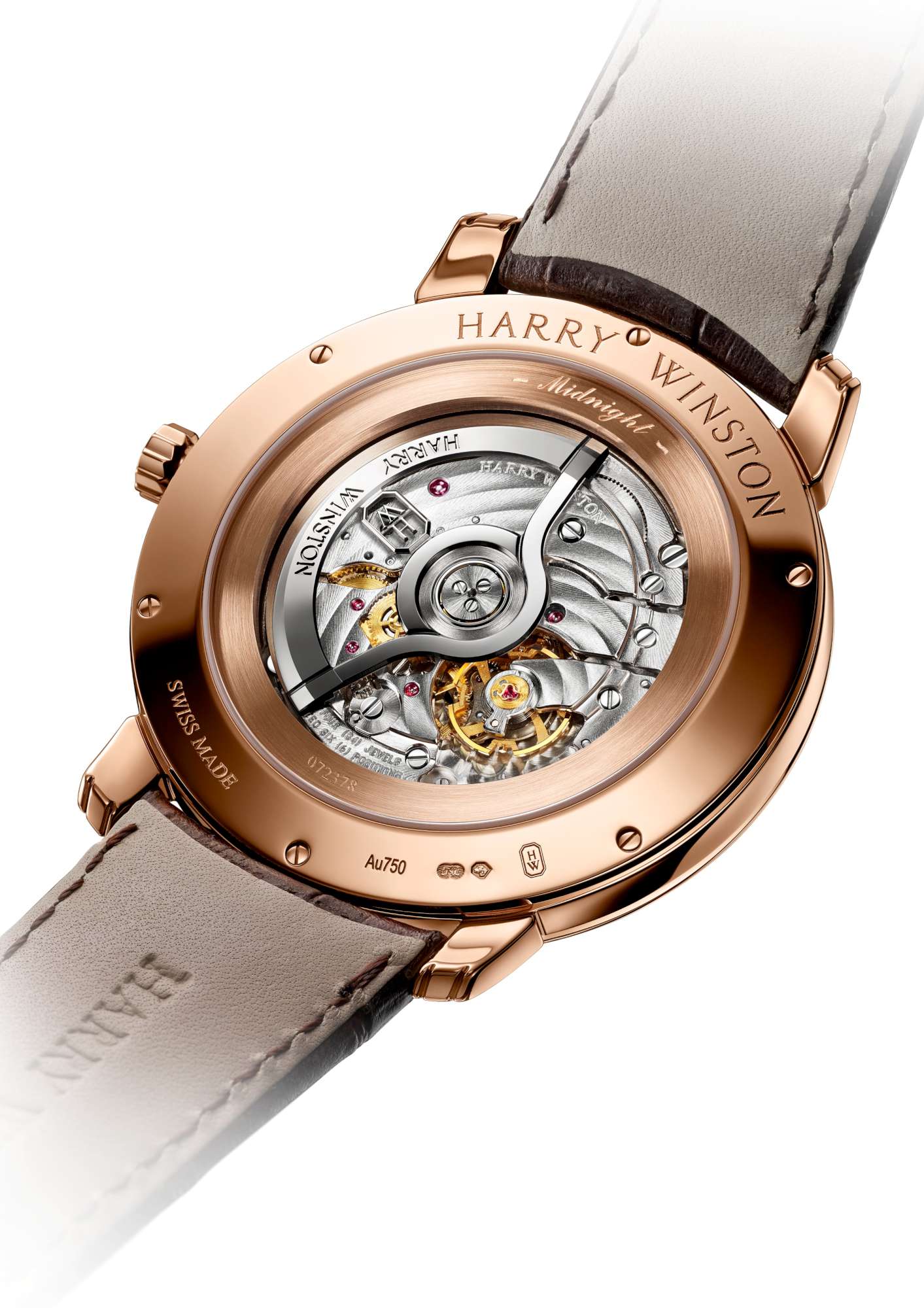 Below, detail of the dial: 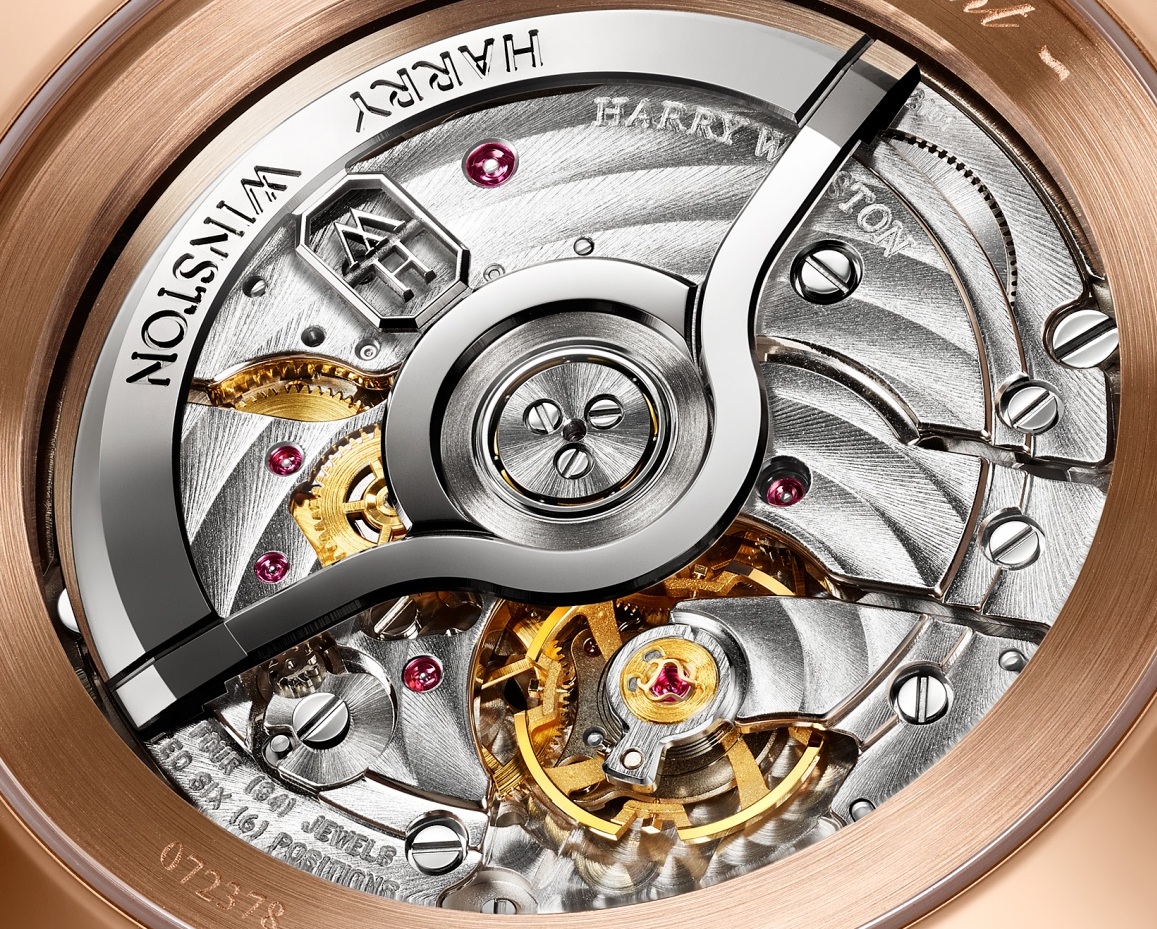