Jaquet Droz watches often have a large dial with time indications on two decentred dials and a lot of blank space around them where there is nothing going on, as in the Grande Seconde Quantième Ivory Enamel. In other models, they have the same type of decentred dial, and a lot of space around it where all sorts of things are going on. Jaquet Droz are masters of animations, and the latest version of the Bird Repeater, unique in the area of minute repeater watches, is like a biology lesson. With a bit of geography as well, because in the background painted onto the white mother-of-pearl dial you can see Geneva, with the Jet d’Eau fountain (whose falling plume is animated by a constantly rotating disc), the lighthouse Le Phare des Pâquis, and on the right, the Salève, a pre-Alpine hill providing views over the city. 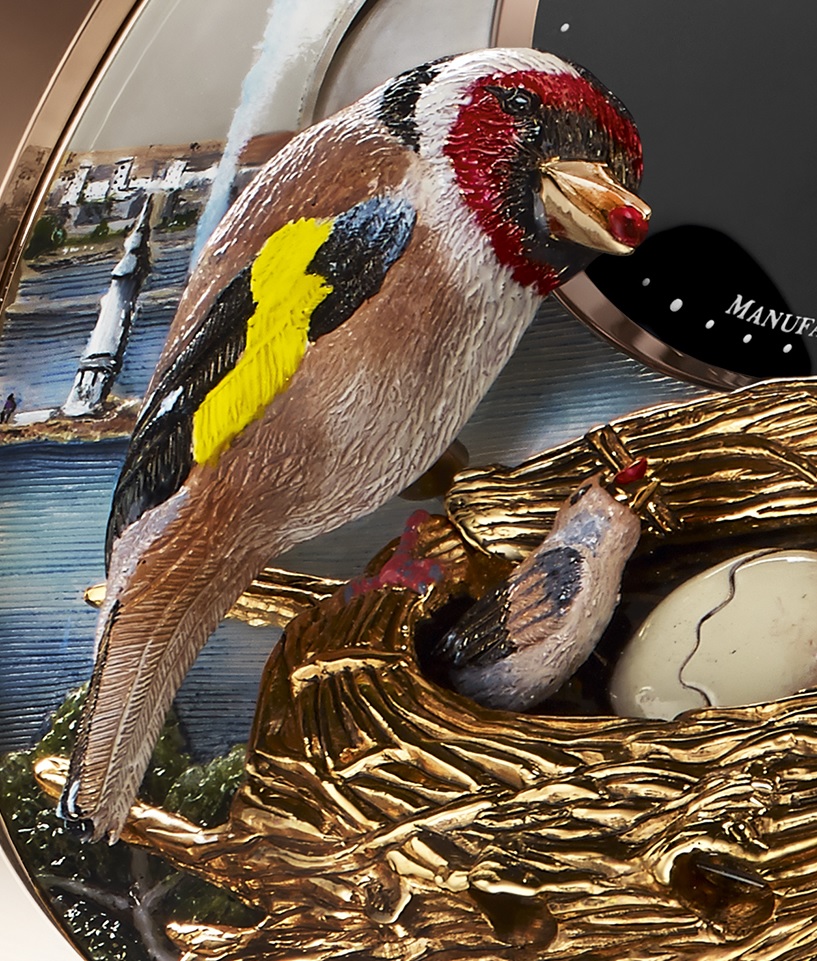 The main scene features two goldfinches, nesting on the small island Île Rousseau, a sort of bird paradise at the centre of the lake. The two birds are hand-sculpted in gold and then painted in meticulous detail, along with two chicks and an egg. The goldfinch is a species in which male and female are very similar to the point of being indistinguishable, and if I had to hazard a guess I would say that the male is the bird on the left, with a bit more red on its head, but in actual fact, the female is on the left taking care of the chick. Anyway, all this celebrates Geneva, where Pierre Jaquet-Droz opened his third workshop in 1784, and in fact the watch is called The Bird Repeater Geneva.

This piece is a minute repeater, and so when you operate the slide on the left-hand side of the case, the watch strikes the hours, quarters and minutes, accompanied by eight movements in the scene on the dial, in which the bird on the left feeds a chick, the bird on the right spreads a wing, and the egg hatches.

The great detail of the fledgling scene contrasts with the simplicity of the hour and minute dial in black onyx. The red gold case is 47 mm in diameter and 18.7 mm thick. Inside, the Jaquet Droz RMA88 movement is automatic with a 48-hour power reserve. The view through the sapphire caseback is as attractive as the front, with movement, gongs and hammers in full view, and lovely Cotes de Genève finish radiating out from the balance. This watch is made in a limited edition of eight. Retail price for the UK is £354,400, about €462,000. 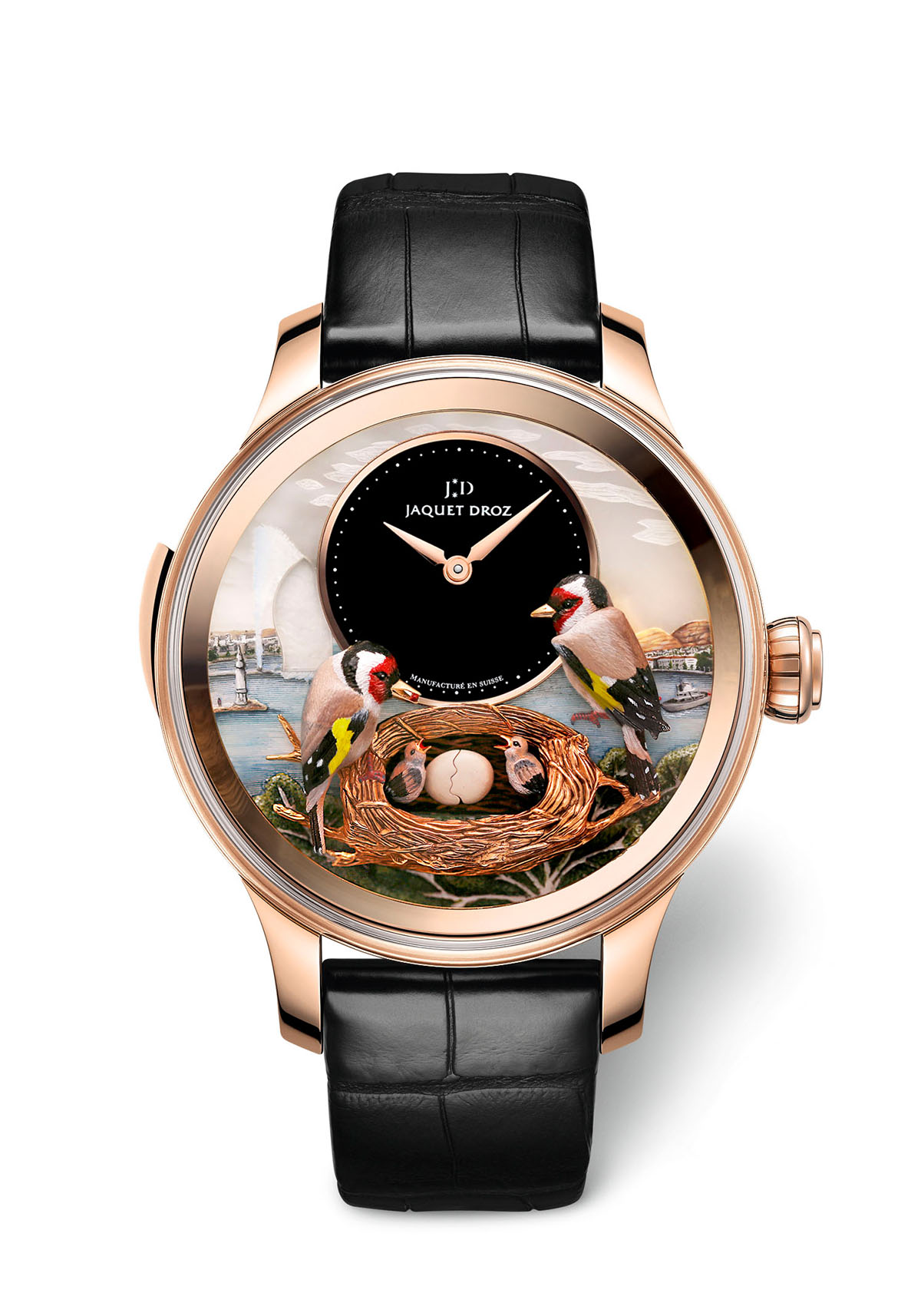 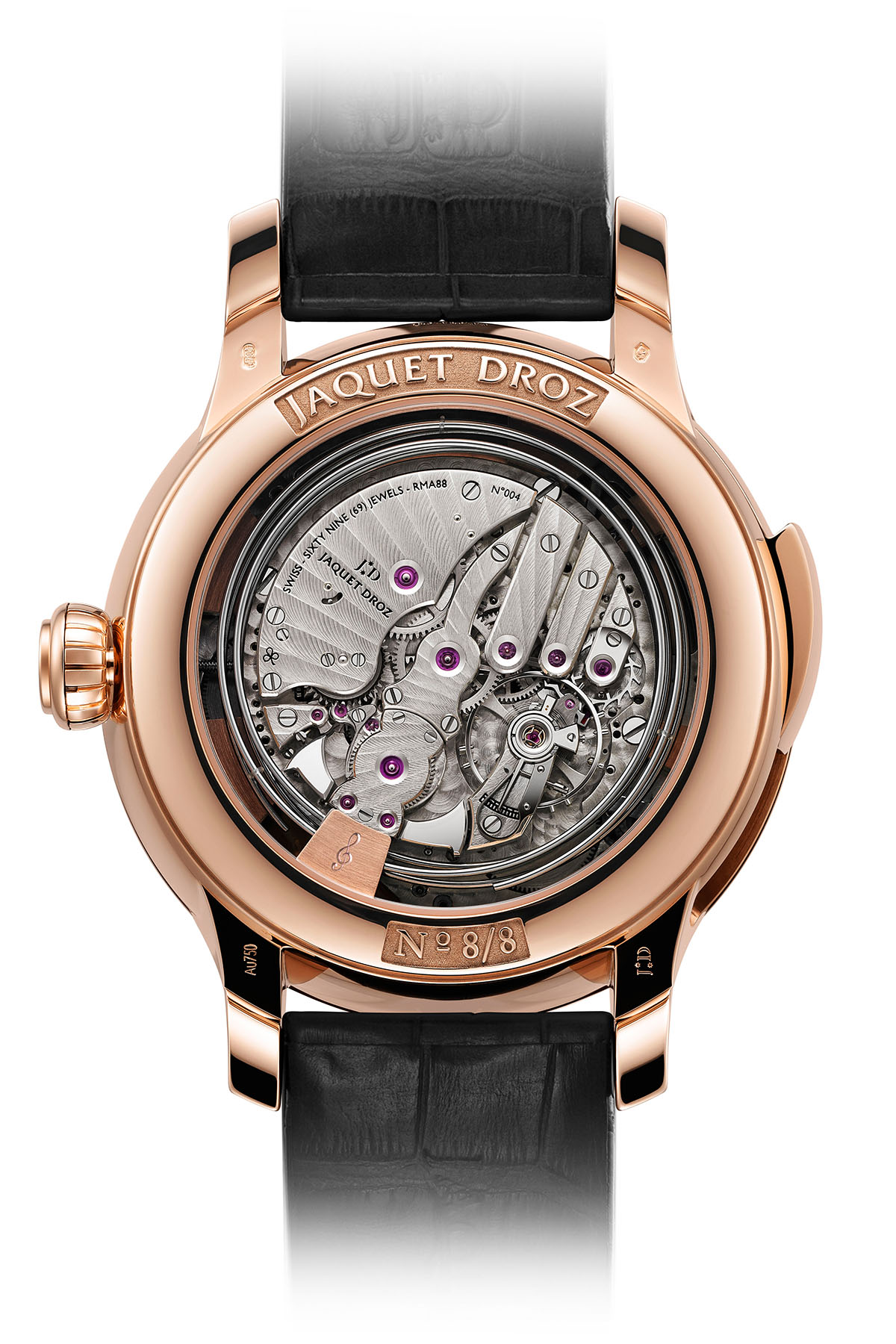 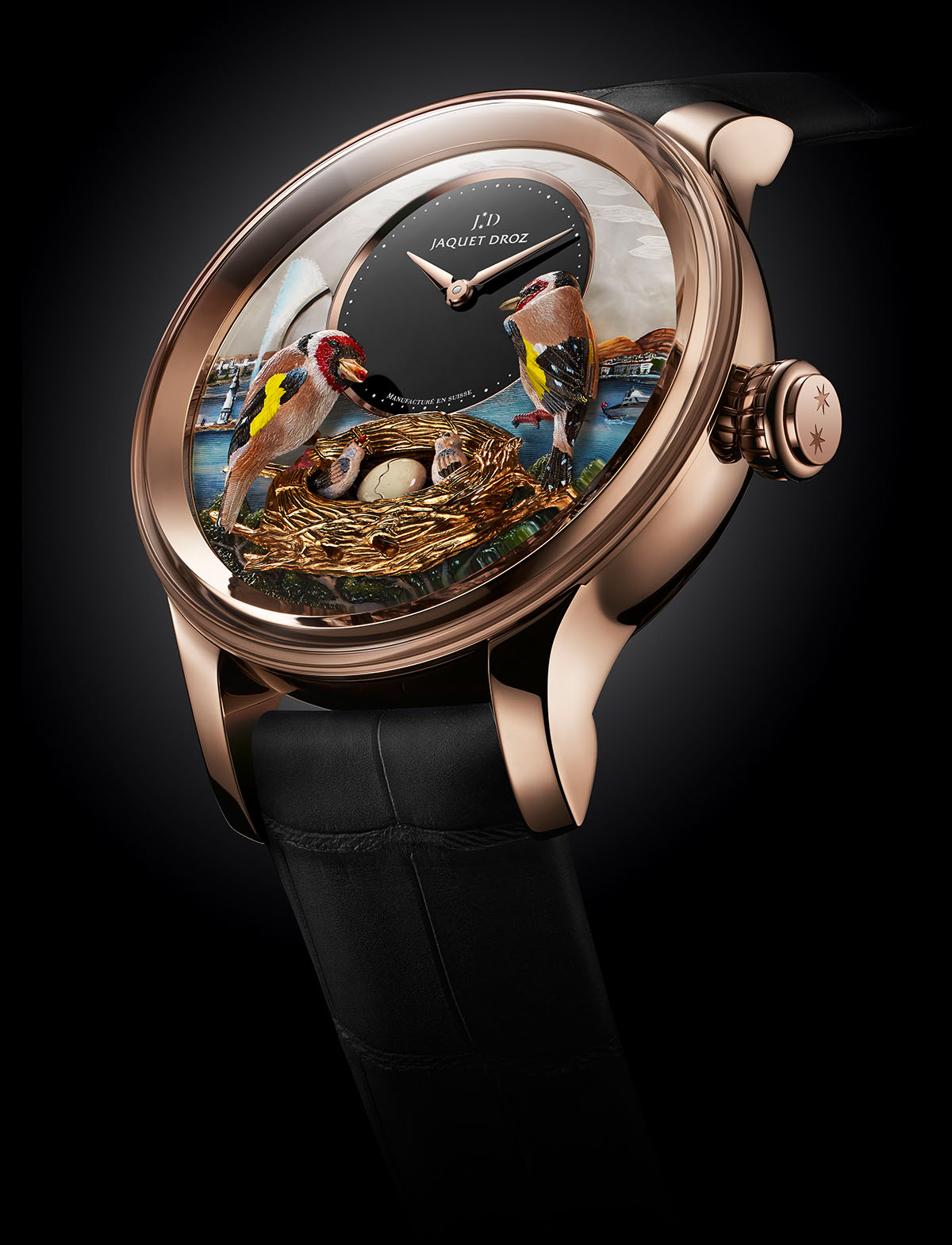 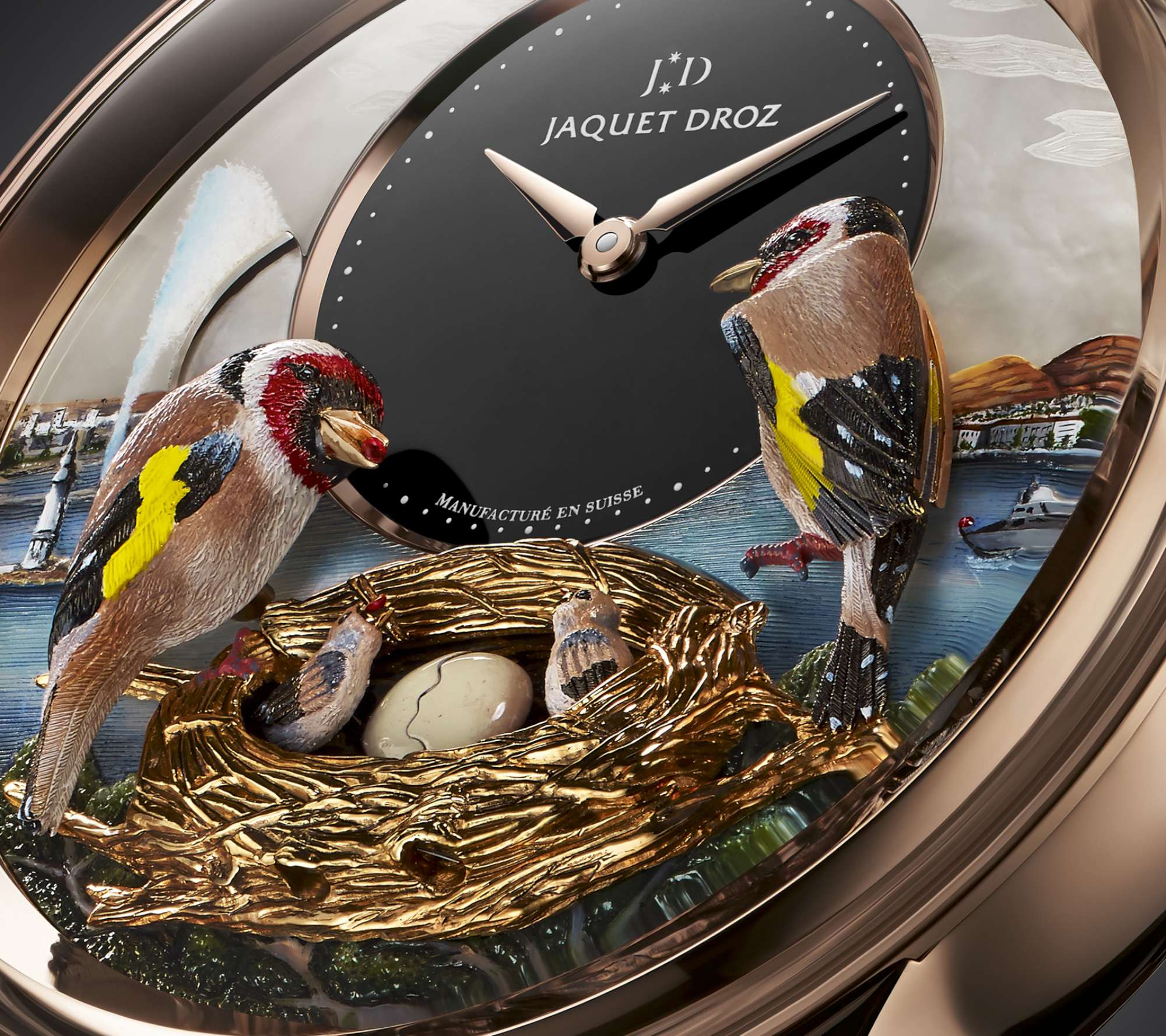 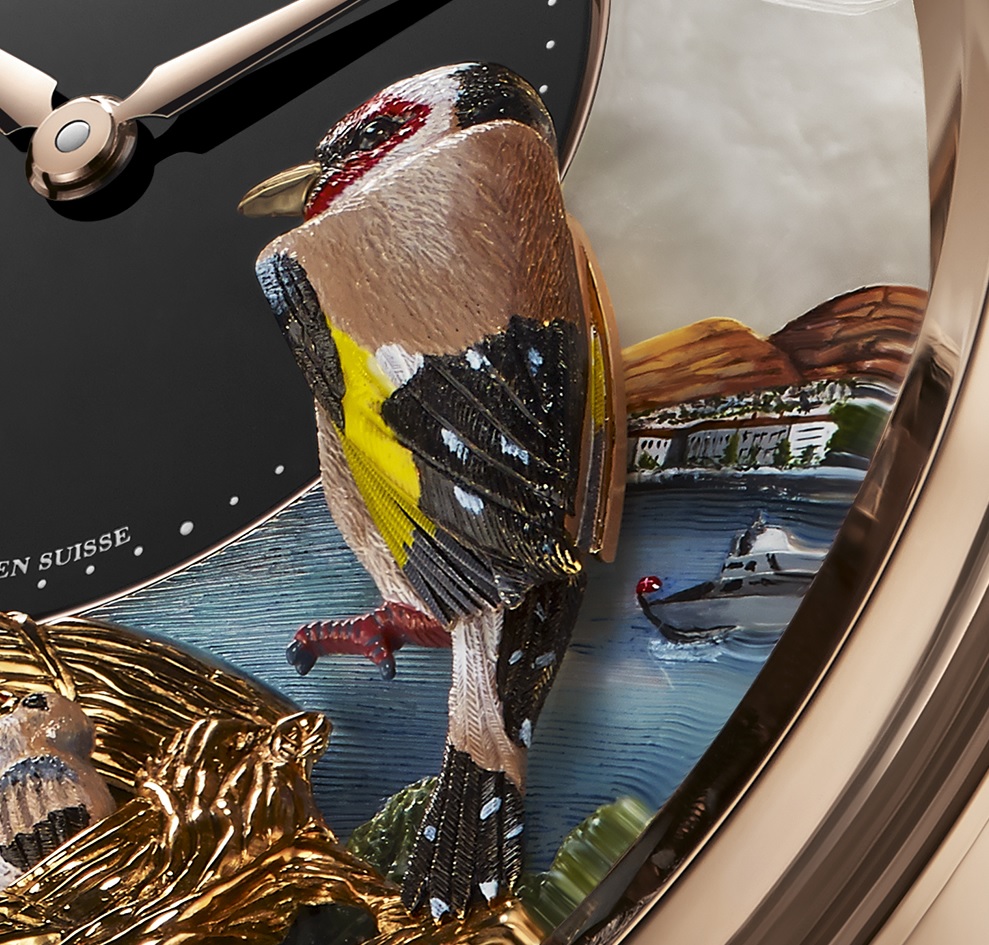 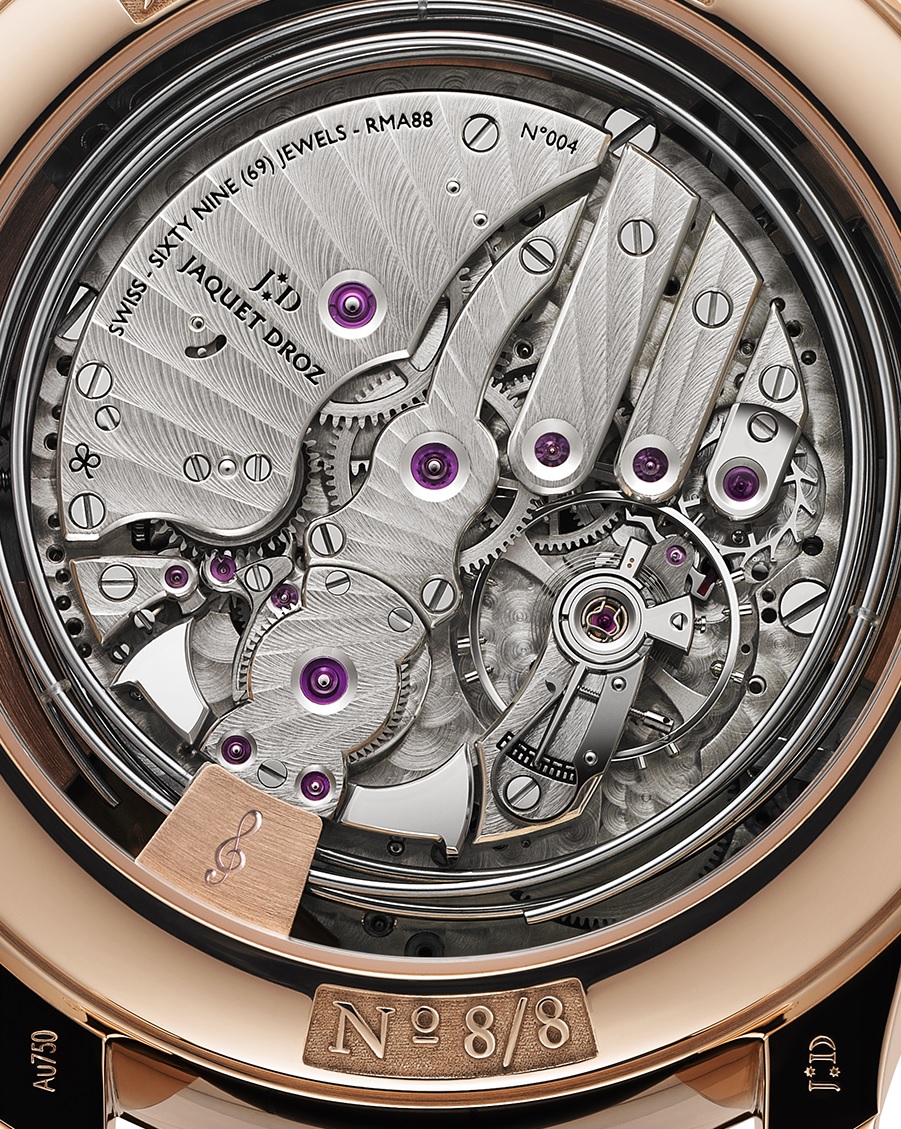 The video below shows the animation of the 2012 Bird Repeater.