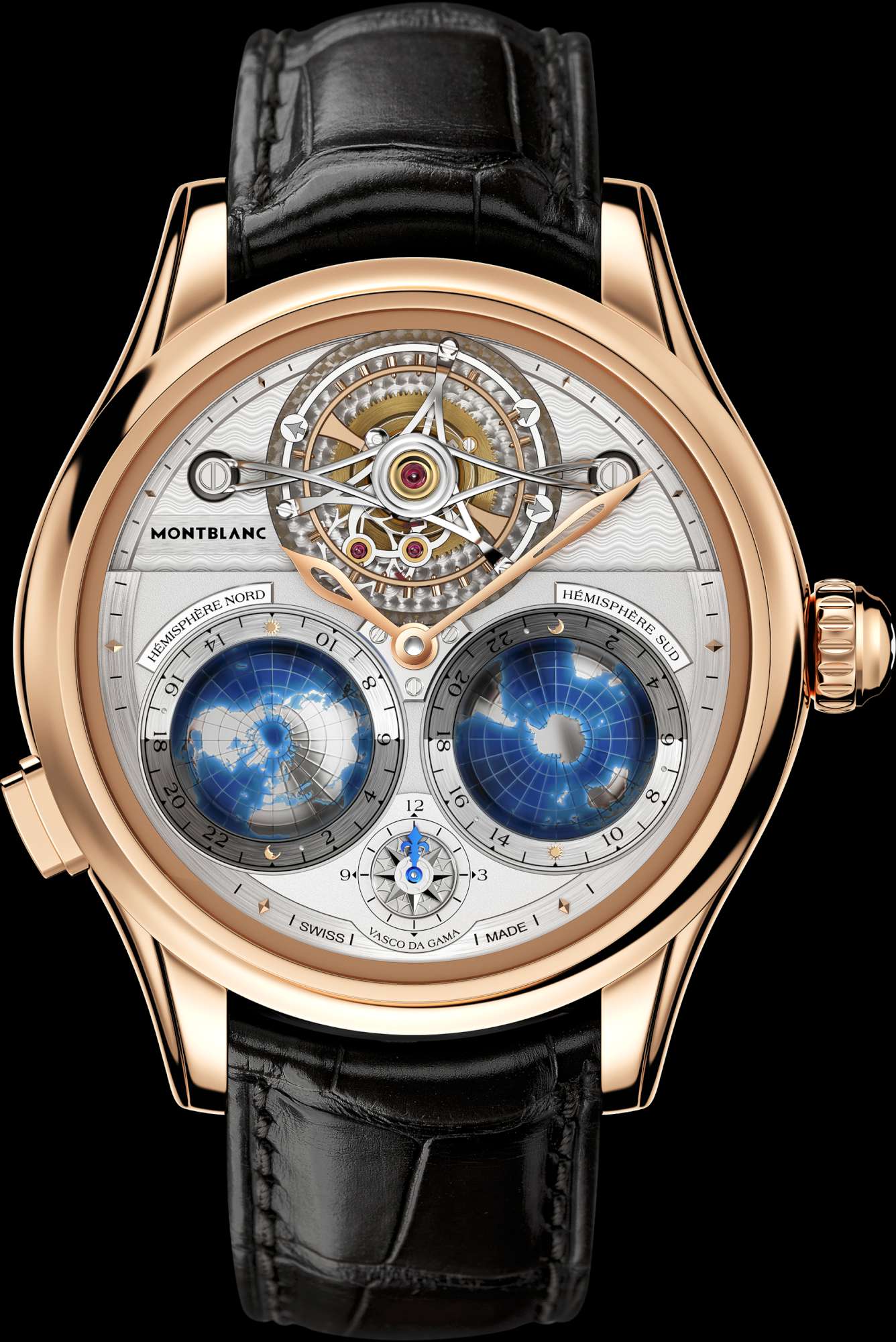 Montblanc are treading an interesting path, with a complete new range of entry-level watches in the Heritage Spirit collection alongside the existing Star collection that also caters for people looking for their first luxury watch. At the other end of the scale there are the super-high-end pieces such as the Villeret Tourbillon Cylindrique Geosphères Vasco da Gama, of which 18 will be made for the whole world, at a price of about €250,000 (inclusive of VAT) each. This duality reflects their manufacturing structure, with Le Locle on one hand for design, and the production of the unlimited-edition pieces such as Star and TimeWalker, and the Villeret unit, which was once Minerva, and where exclusive pieces are made using traditional crafts and the original machinery.

Vasco da Gama is one of the themes of this watch, but also of the entire Montblanc collection. In 1497 the Portuguese navigator sailed his fleet from Lisbon, around the Cape of Good Hope and on to India, the first time that Europeans had sailed around the southernmost tip of Africa. This opened up a new trade route and opened up the southern hemisphere. The navigational theme of the Villeret Tourbillon Cylindrique Geosphères Vasco da Gama can be seen from the compass rose-type subdial at the bottom of the dial, providing one time zone reading (for example, home time, that can be adjusted independently), an hour and minute hand for local time, and the fascinating hemisphere half-globes that depict the 24 time zones in both the northern and hemispheres. They also act as a day-night indicator. The hemispheres themselves remain motionless: the two 24-hour indicator discs around them rotate once per day, in opposite directions.

At the top of the dial is the cylindrical tourbillon with its distinctive curved tourbillon bridge, hand-finished using gentian wood to polish it. The tourbillon has 91 of the Calibre MB M68.40 movement’s 281 components, and its 14.5 mm balance wheel oscillates at 2.5 Hertz, 18,000 semi-oscillations per hour. The hairspring is made in house. Why a cylindrical spring? This comes from the golden age of ships’ chronometers, when the goal was precision. A conventional balance-spring is subject to an eccentric force of gravitation (larger towards the exterior of the spring, where the mass per turn is higher), and so this problem can be solved by making all the turns the same diameter, arranged vertically in a cylinder. 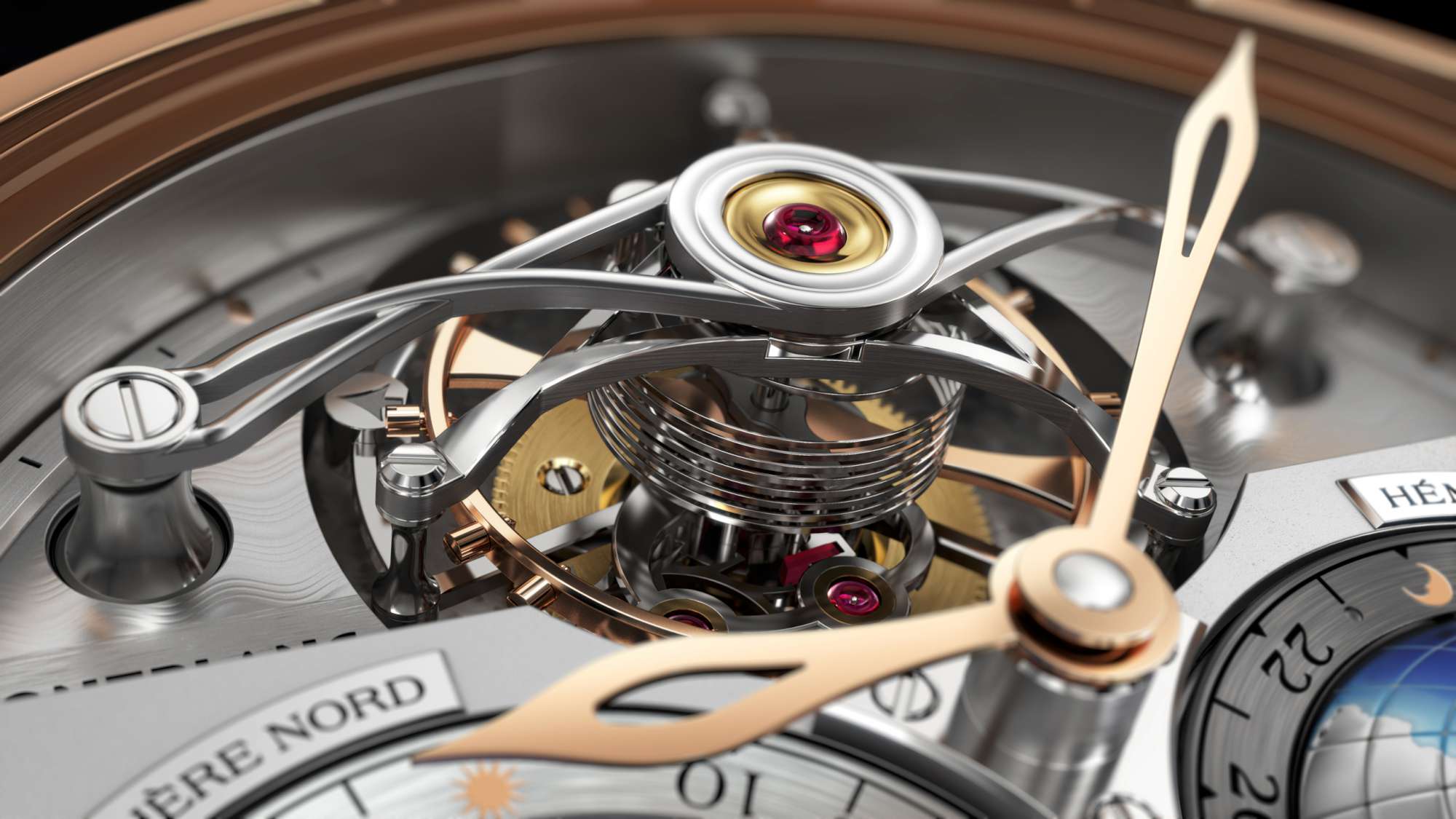 Using the watch is relatively simple. The crown is used to adjust local time on the two hands; this also adjusts the discs of the world-time display. An inset corrector at 4 o’clock enables adjustment of the home time on the compass-rose subdial at 6 o’clock. Once the watch has been set up, the pusher at 8 o’clock can be used to set the watch to a new local time, advancing the central hour hand (local time). So the user can see home time from the compass-rose subdial, and the time anywhere else in the world using the two 24-hours discs.

This watch is an expression of the “democratic” approach, making watches inherently practical for southern-hemisphere residents as well as Europeans and Americans. It also reflects the overall astronomical theme that could be seen at SIHH, with views of the earth as seen from outer space. 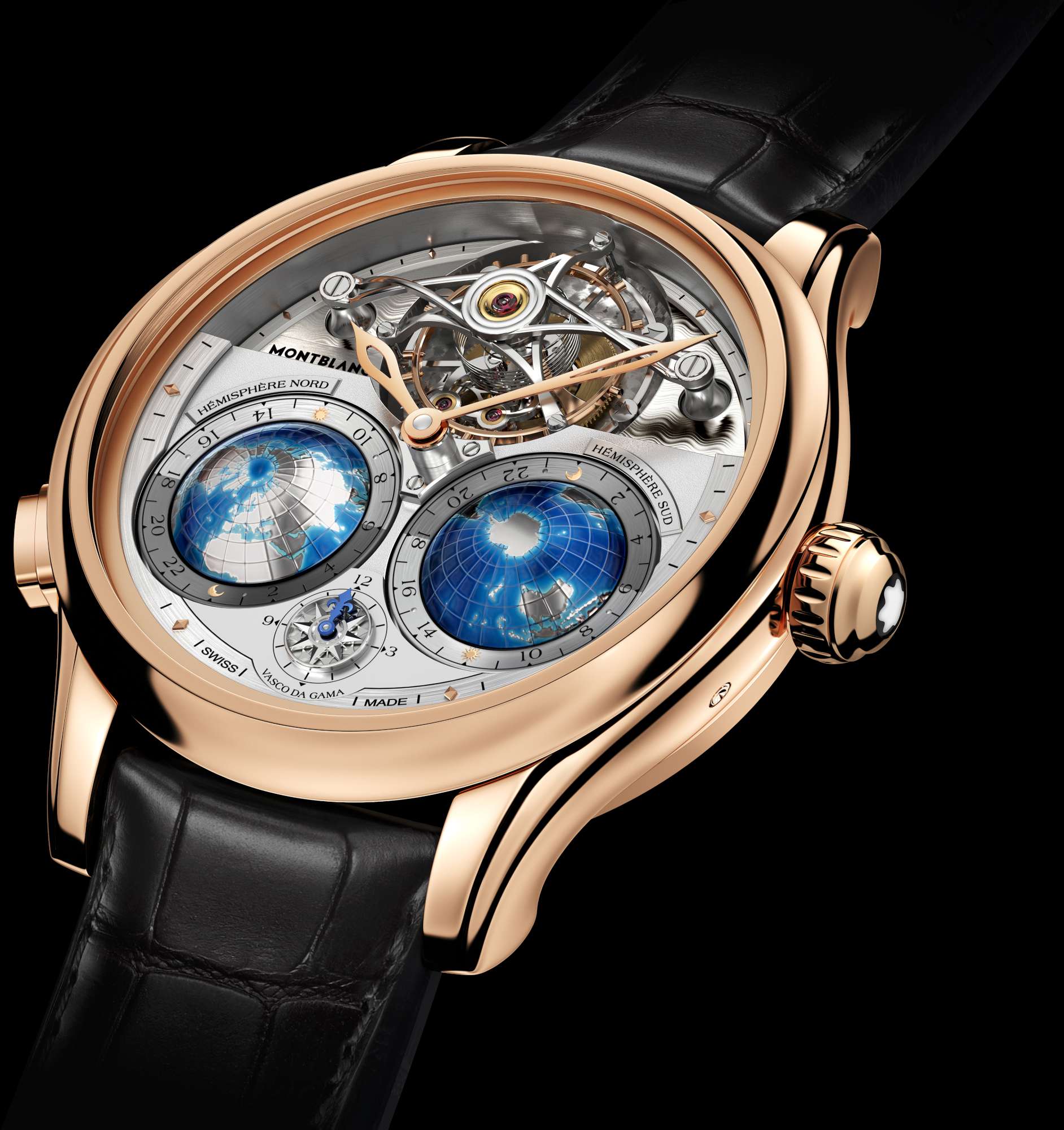 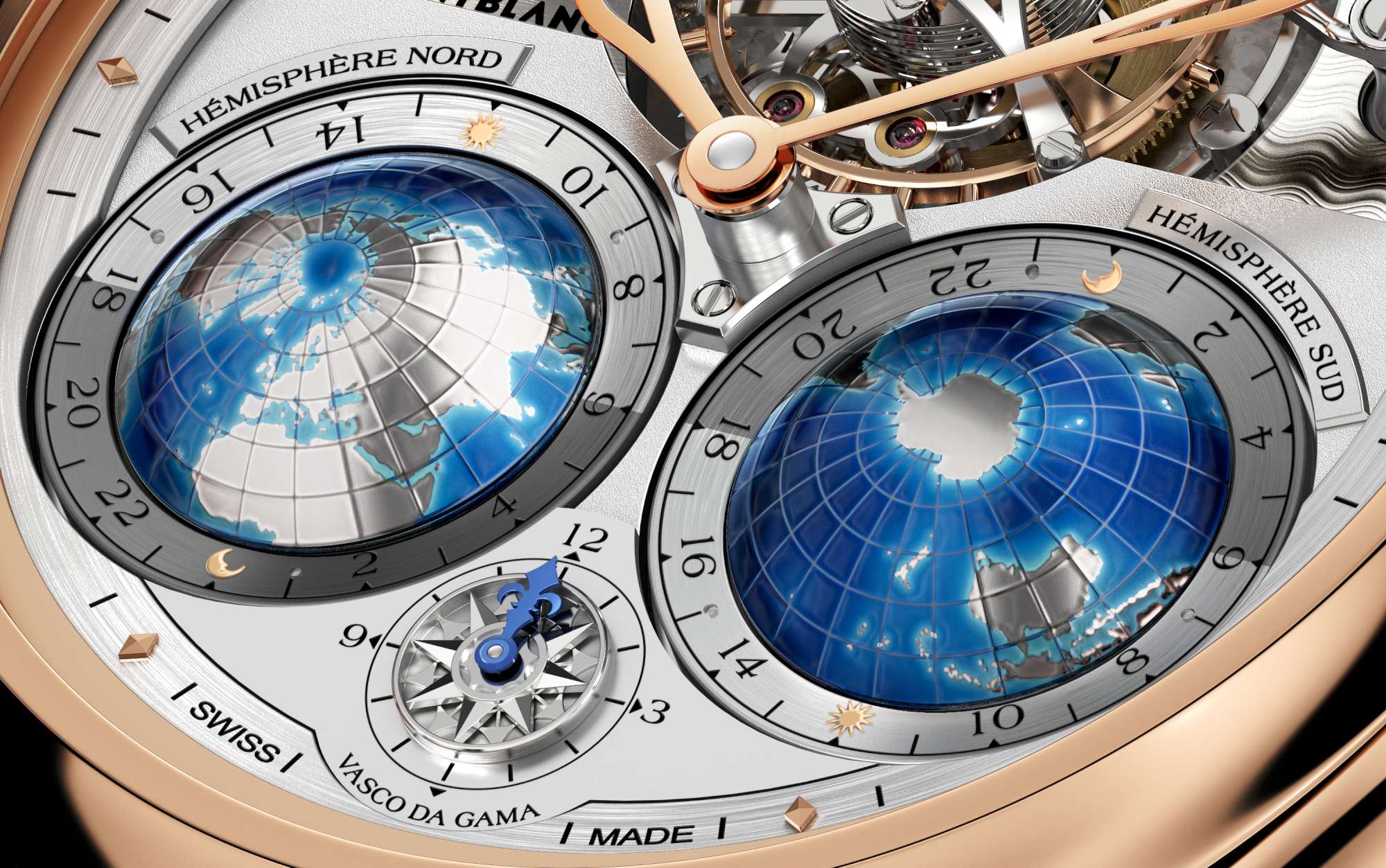 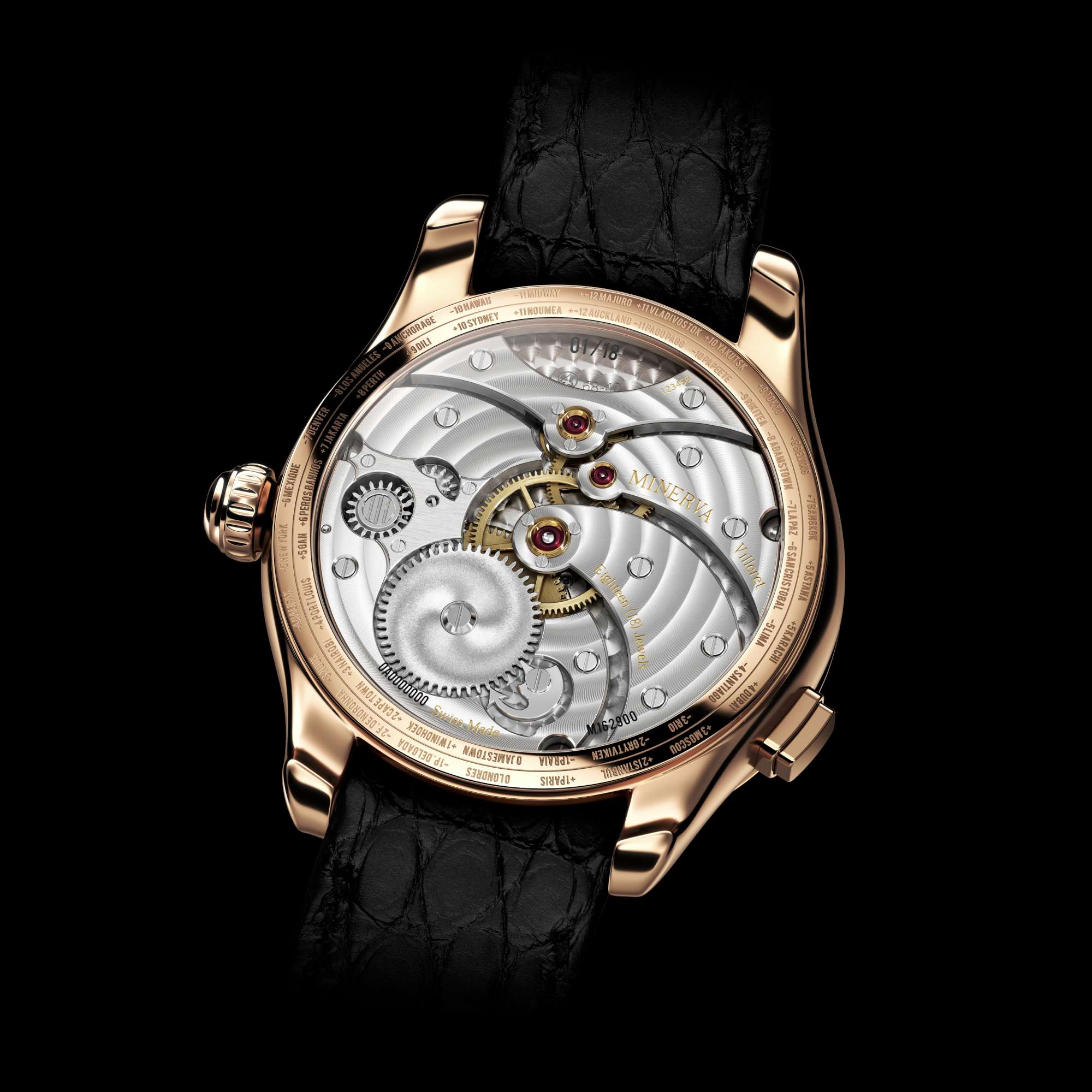 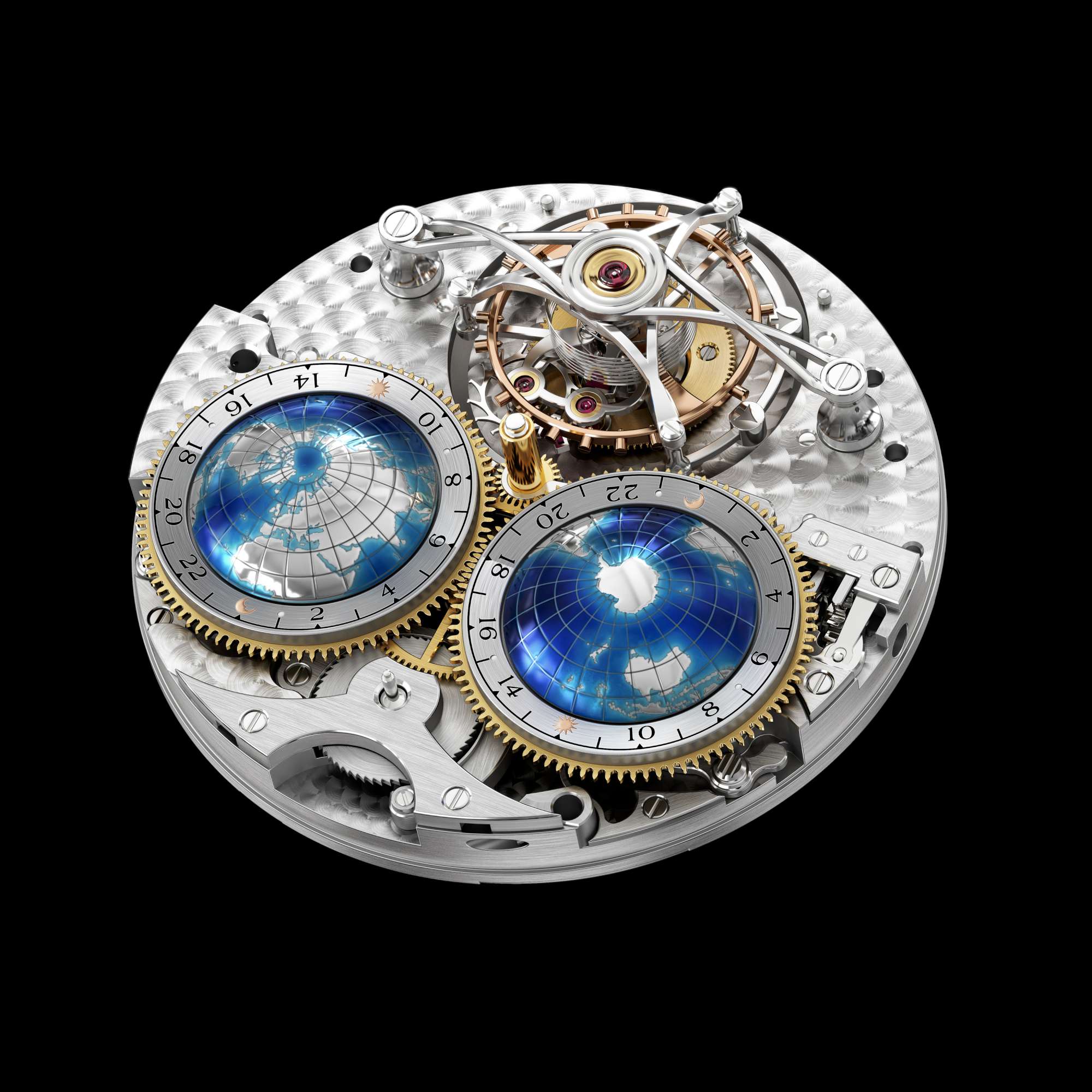 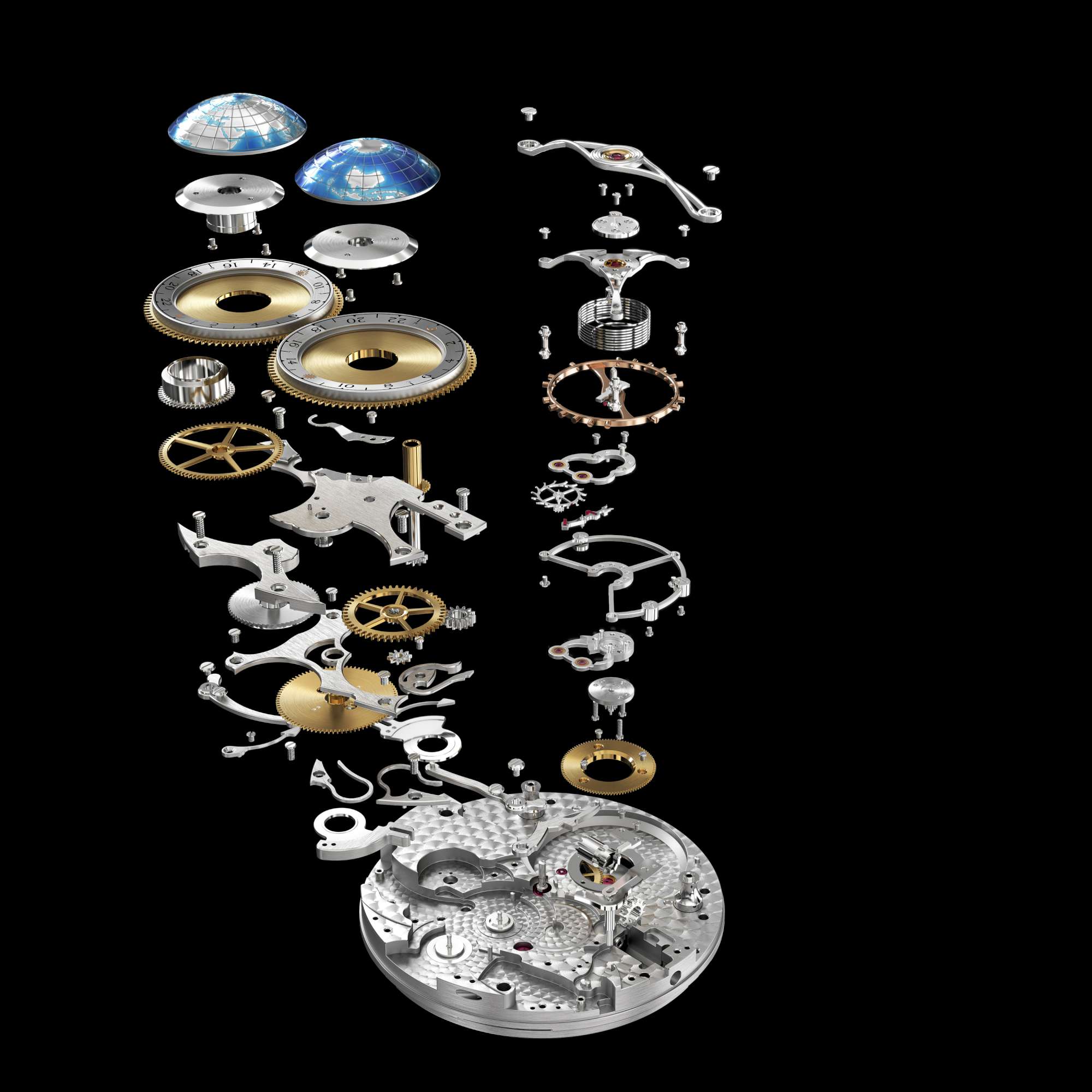