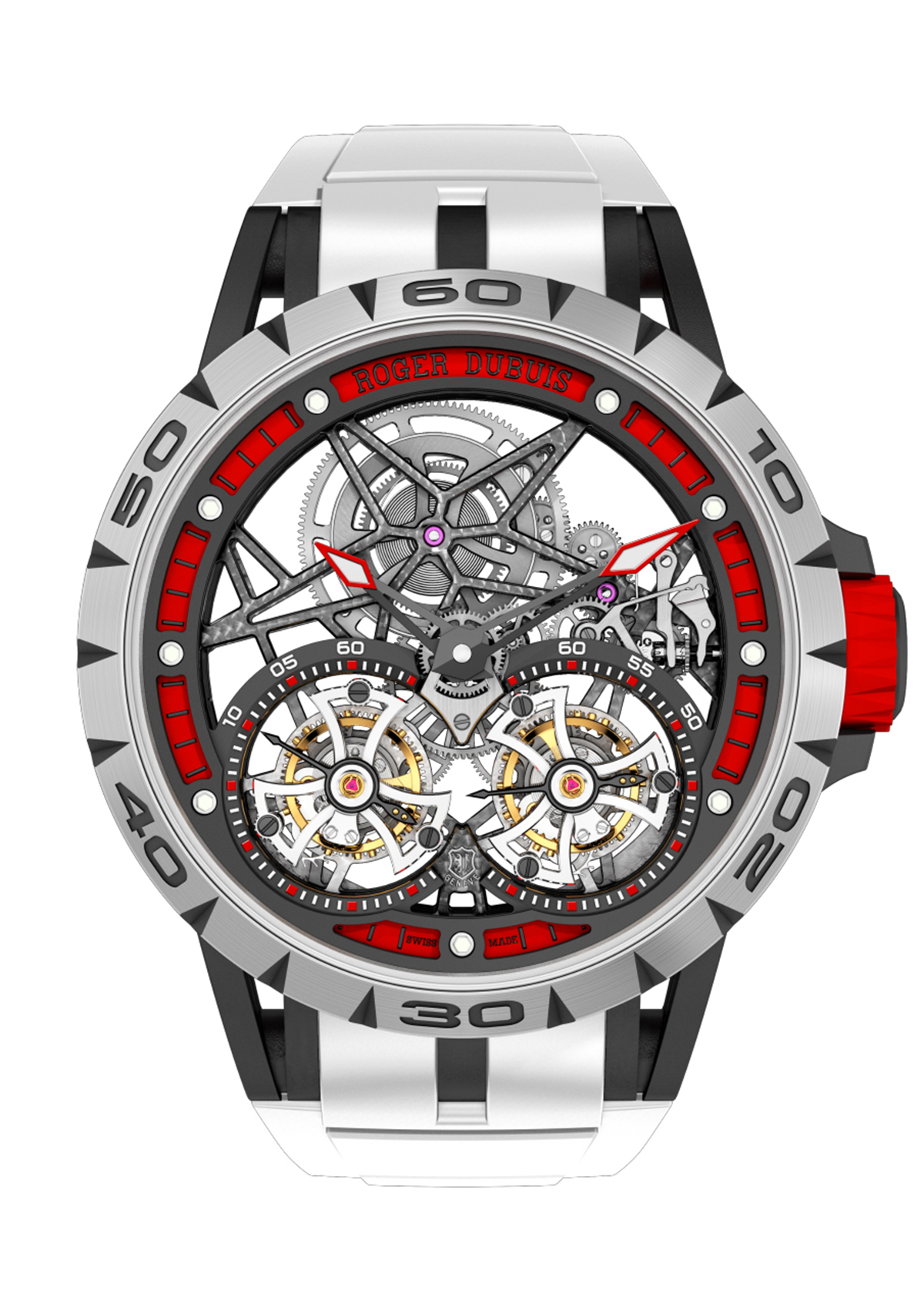 When it comes to skeletonization, different brands do different things. Vacheron Constantin create Gothic edifices with graceful curving arches. Roger Dubuis’ aesthetic approach in this piece is somewhere between the arachnic and astronomic, with watchmaking director Gregory Bruttin referring to “the patient, meticulous and inventive nature of the work done by a resourceful arachnid as it daily spins its web in ever more novel and intricate patterns,” and a stand at SIHH that suggested dark and mysterious 3-dimensional structures floating in the blackness of outer space. “Astral” was the theme of the collection, also adopted by many other brands at SIHH, and the Excalibur Spider Skeleton Double Flying Tourbillon has something of a space station in its looks. The barrel bridge is constructed in a star shape, with four of the points joining the case in correspondence to hour markers. Below, the double tourbillons also have star-shaped bridges, visible through the sapphire caseback; each has a second indicator, and they counter-rotate, a quirky and engaging feature. They are linked to the gear train in such a way that their time-keeping is averaged out. The space-age look is heightened by high-tech materials such as titanium, red-anodized aluminium and black DLC coating, and in particular the red aluminium also introduces a hint of motor sports. The piece is large at 47 mm, and there is so much going on inside that you almost miss the hands, also skeletonized, with SuperLuminova at the tips to make telling the time easier. Its modernity contrasts pleasantly with the traditional, meticulously-worked finish, with all metal surfaces engine-turned, ensuring that the piece can be marked with the Geneva quality mark Poinçon de Genève, visible on both front and back of the movement between the tourbillons.

The RD01SQ movement is spectacular from front and reverse, skeletonized to the extreme, so that you can see right through the watch. It was originally introduced in 2009; it is manually-wound, with a power reserve of 50 hours. The rubber strap is held on three lugs, one of the Excalibur design features along with the notched bezel. The price of the Excalibur Spider Skeleton Double Flying Tourbillon is still to be announced. It is a limited edition of 188 pieces. 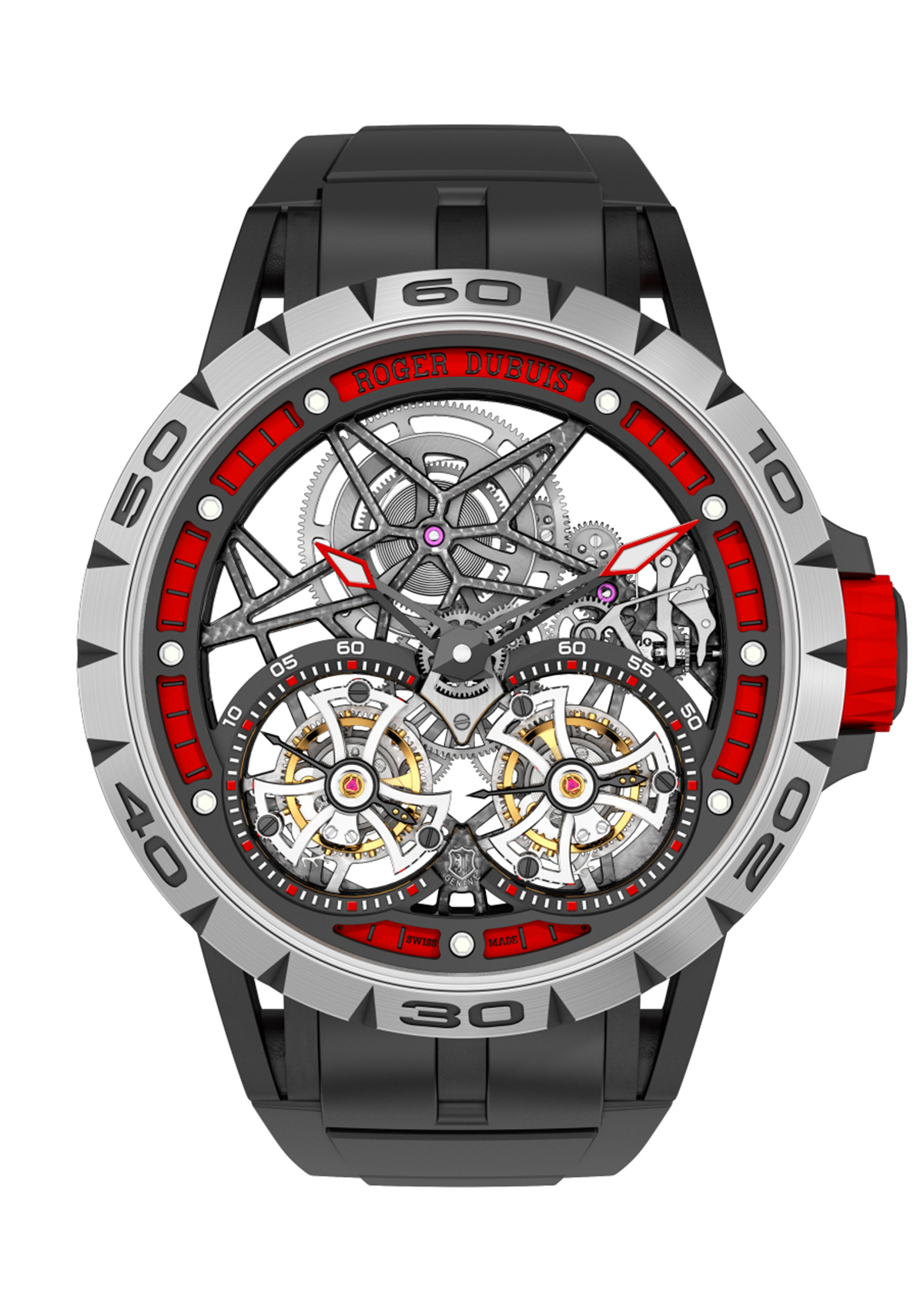 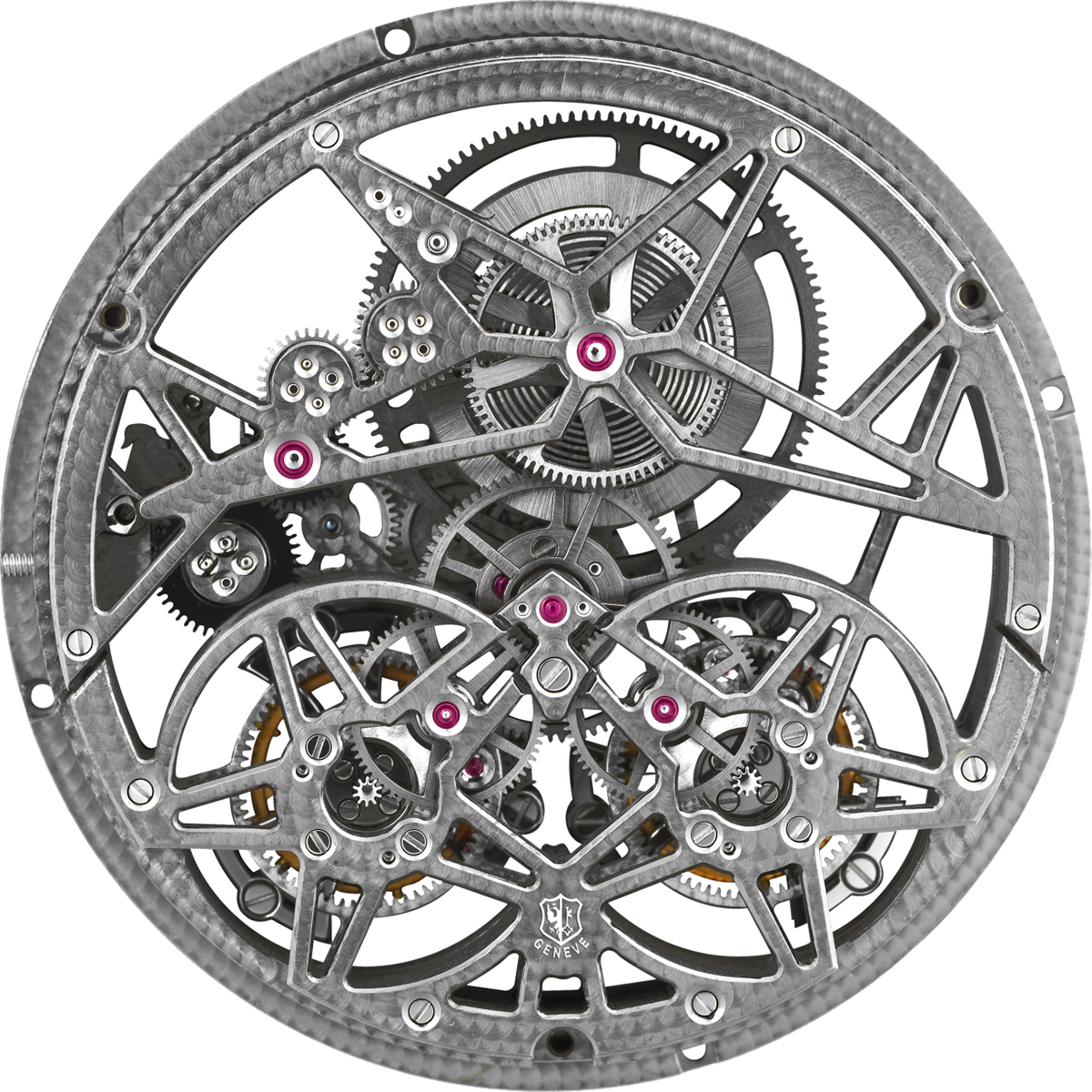 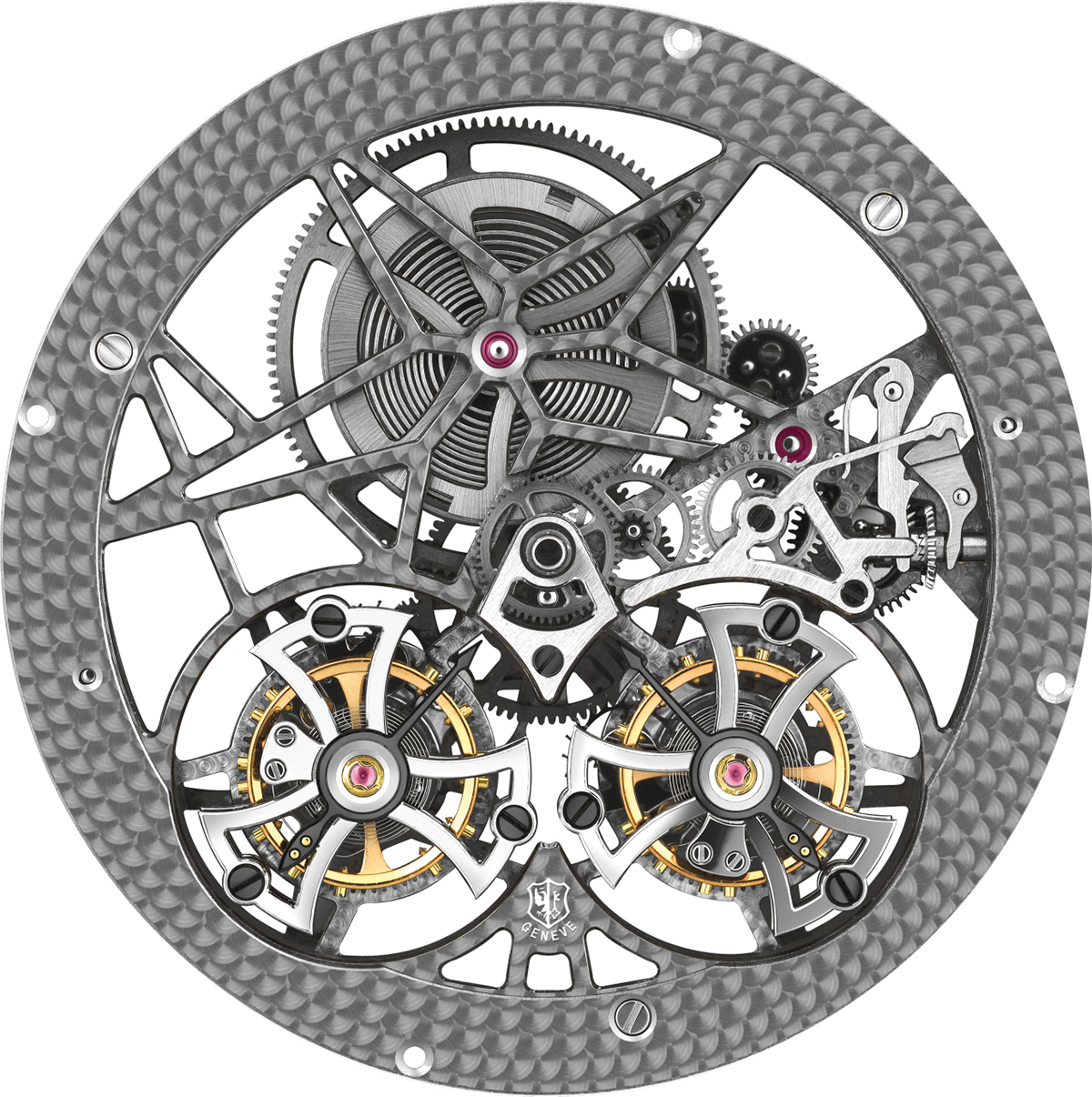 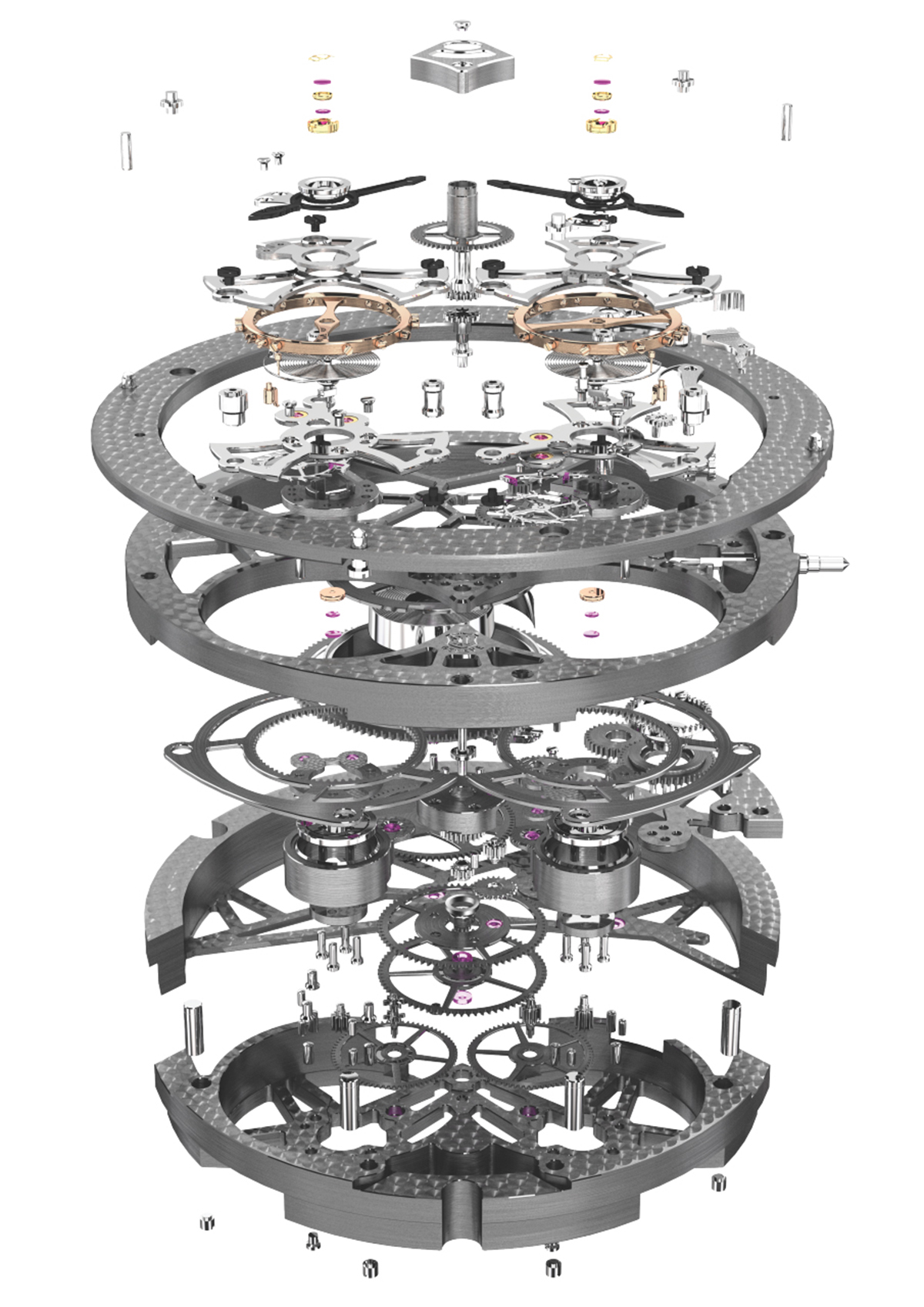 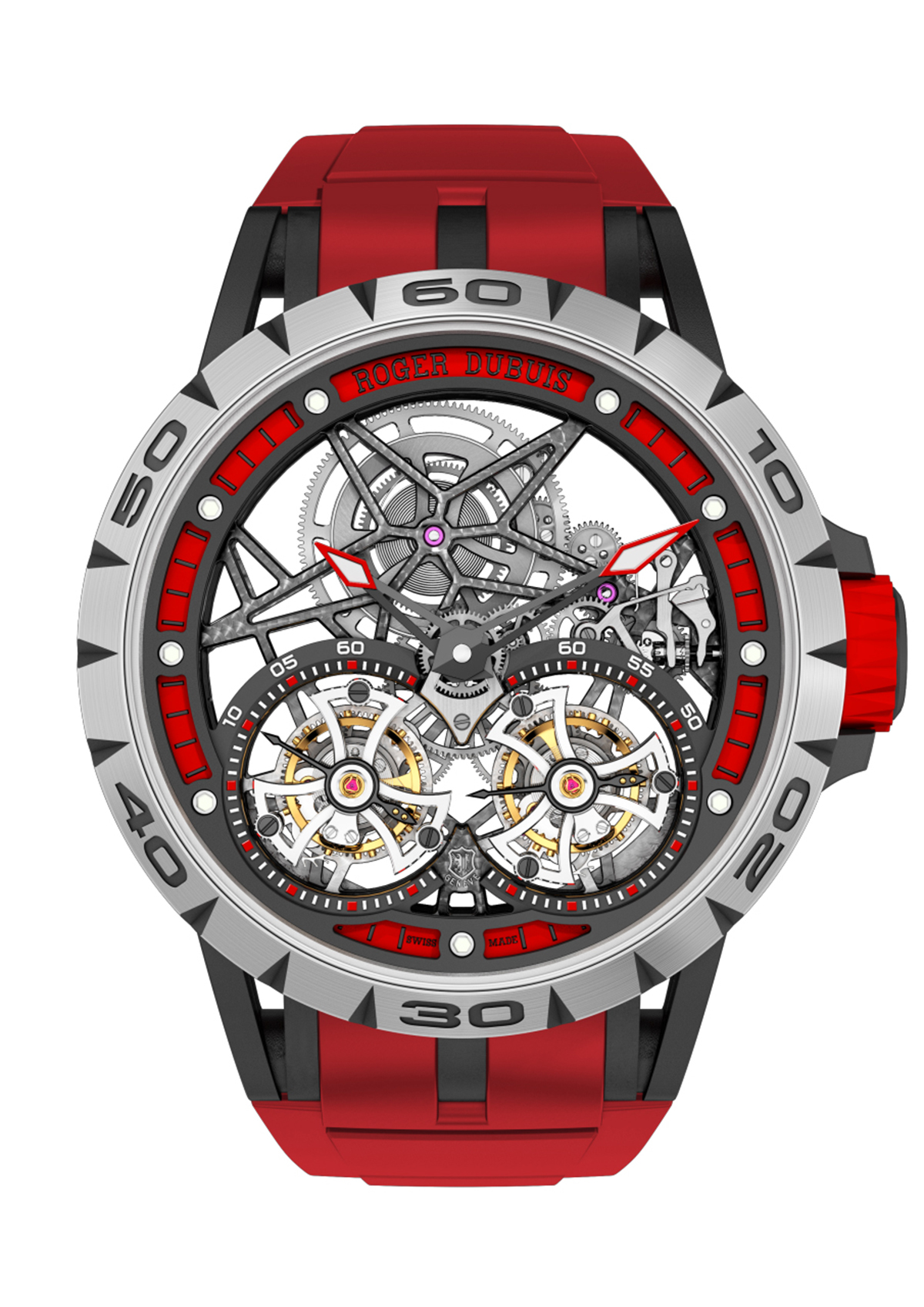