Hamilton, American spirit, Swiss precision. Founded in 1892 in Lancaster (and so I, Ambrose Lancaster, can’t but help feel a sort of family pride), Pennsylvania. Now part of Swatch Group with manufacturing unit in Biel, Switzerland. All this is familiar. But there are a few things about the brand that are less familiar and quite surprising.

1. The King’s favourite brand. The King is Elvis Presley, and the watch that he chose, and used on set in the 1961 film Blue Hawaii, is the Ventura, the first electric watch in the world, introduced in 1957 and known then as the Hamilton Electric 500 before becoming the Ventura with its triangular shape designed by Richard Arbib. Elvis would have turned 80 on 8 January 2015, and to celebrate this anniversary, Hamilton have launched the Ventura Elvis, with an automatic H-10 Calibre movement providing 80 hours power reserve. It will be available in a whole range, with versions for men and women. The piece in the photo has a black PVD-coated case and a sleek curved watchglass that makes it totally contemporary. This version costs €1,195. 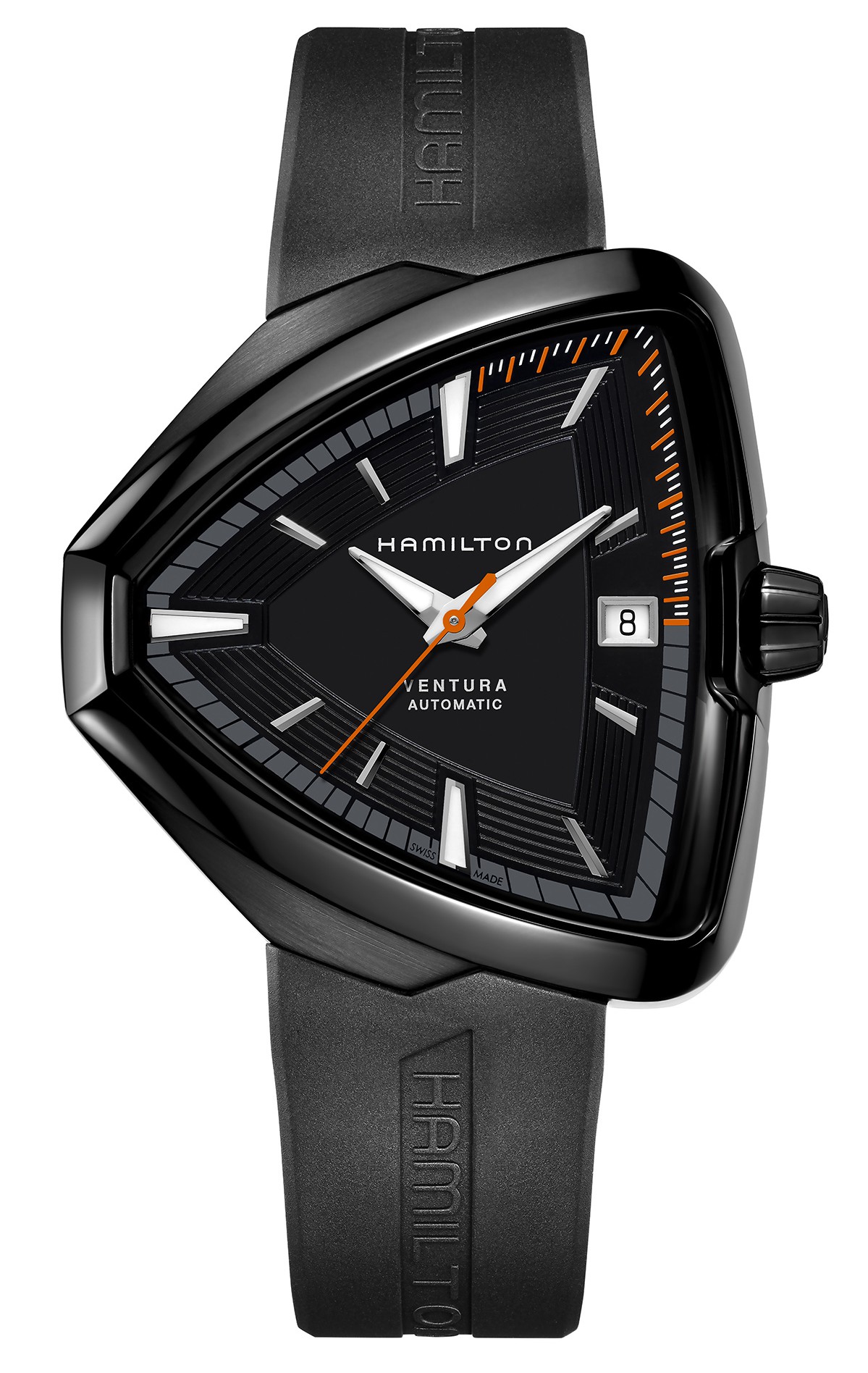 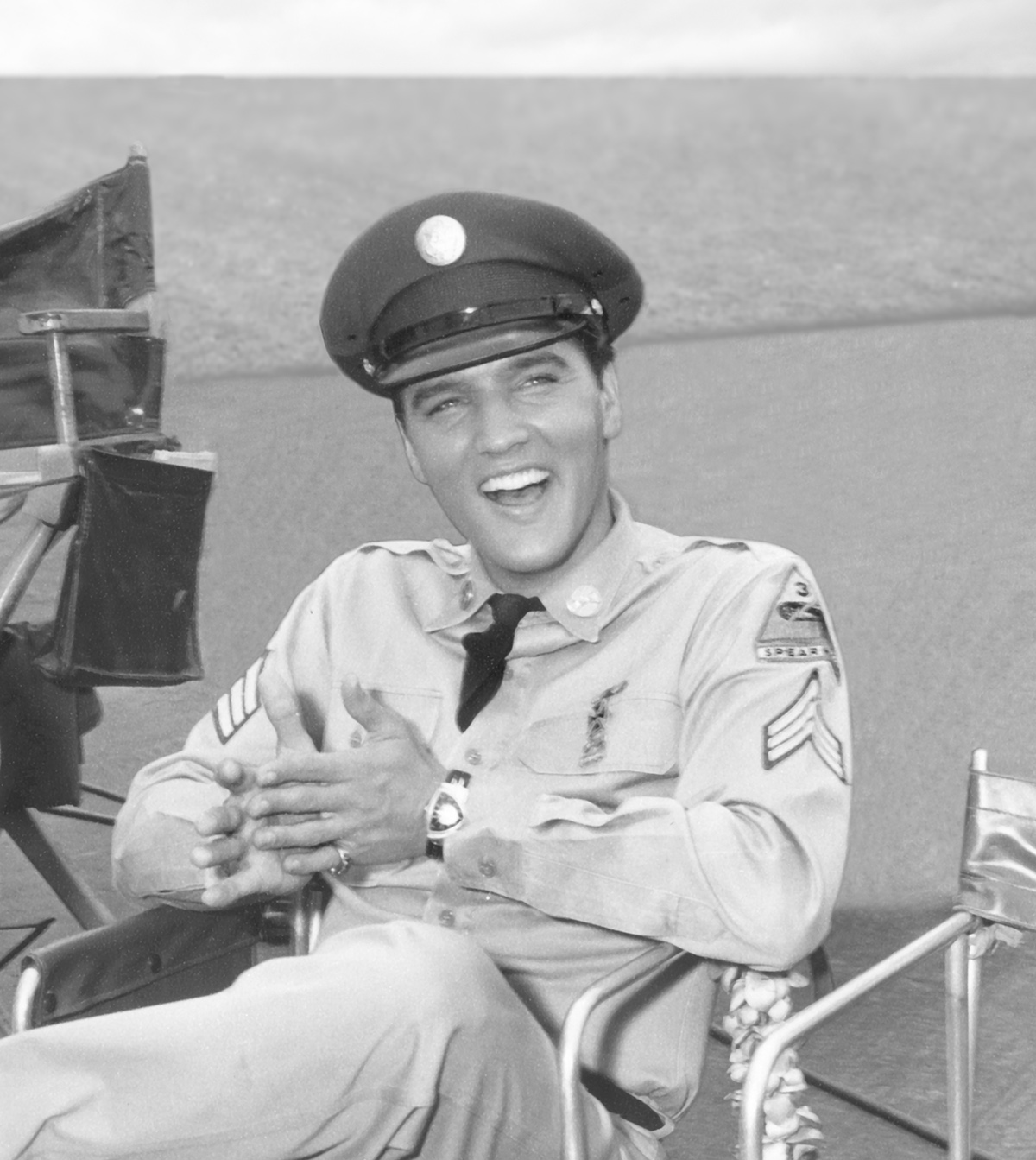 Elvis wearing his Ventura on the set of Blue Hawaii

2. Interstellar. We all know that Hamilton made the two watches that feature so strongly in the Christopher Nolan movie Interstellar, but the surprise is the amount that Hamilton paid to get those timepieces onto the screen. Zero! Hamilton don’t do product placement. They have appeared in 400 films just because for years and years, they have had close links to the film industry. The watch that Matthew McConaughey wears in Interstellar is a normal production model; the piece worn by Jessica Chastain had to be something very different, very recognizable, and Hamilton had to make it in just four weeks. They had to use an existing case, existing hands, mix things up, and the result is a beautiful, functioning watch. Which will never be put into production. 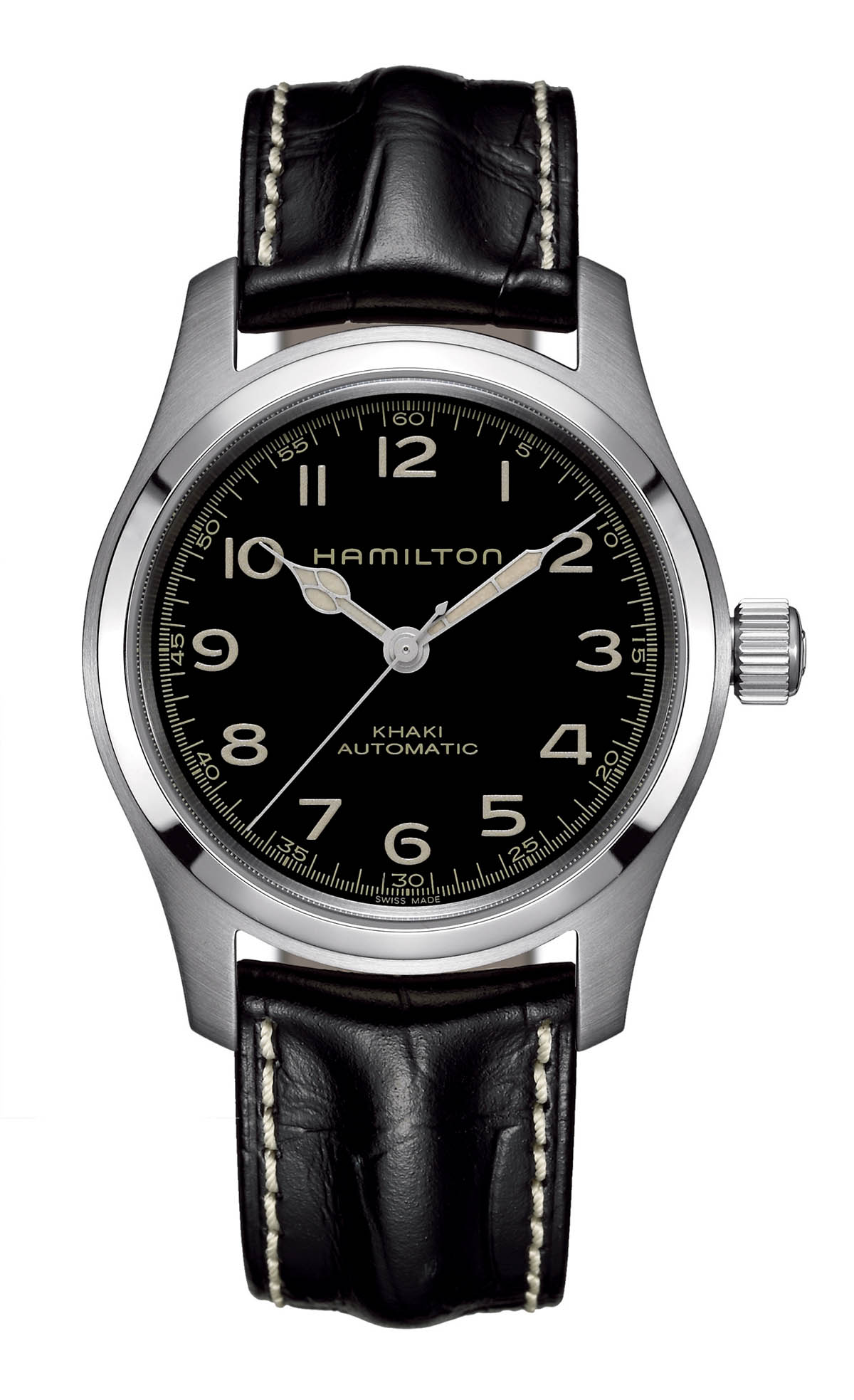 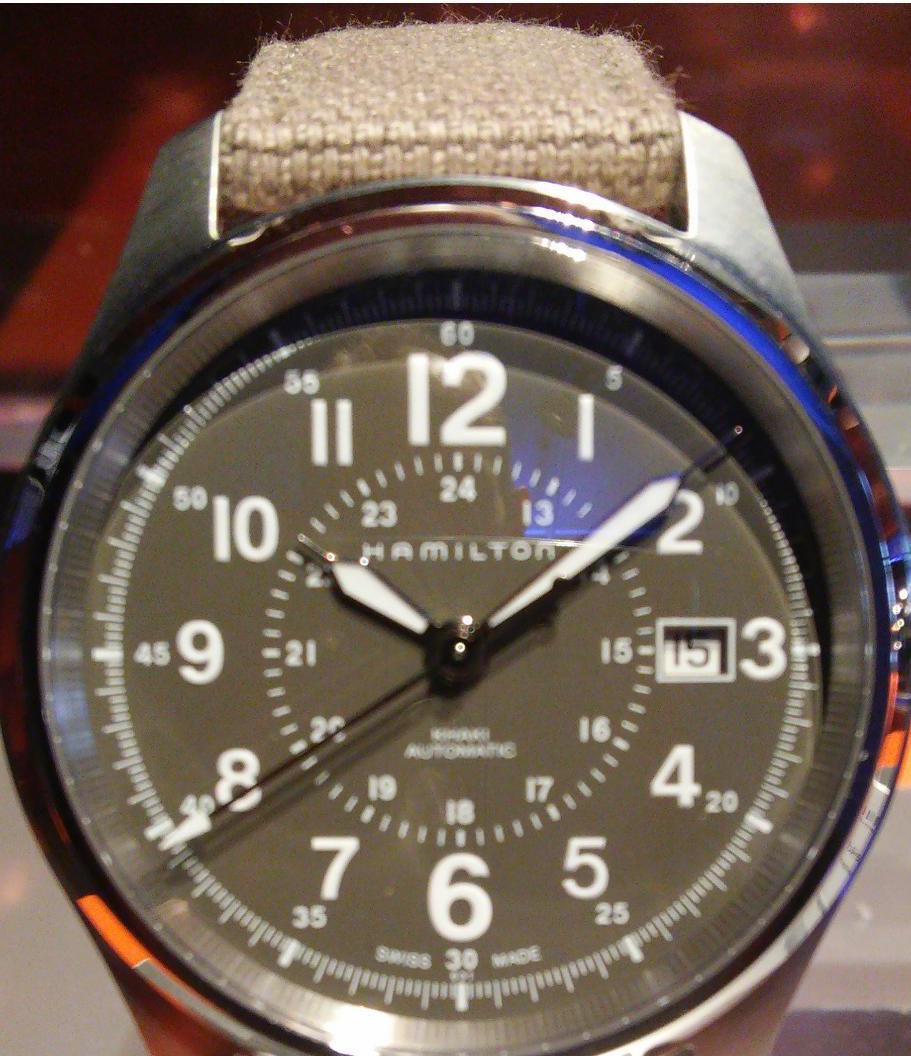 4. A women’s automatic watch at €450. The Valiant is an existing range of 34 mm watches for women, and this year two new strap colours are presented, grey and blue. They look good, and the price makes them super-competitive on a market, entry-level women’s automatic watches, in which there just aren’t that many pieces around. 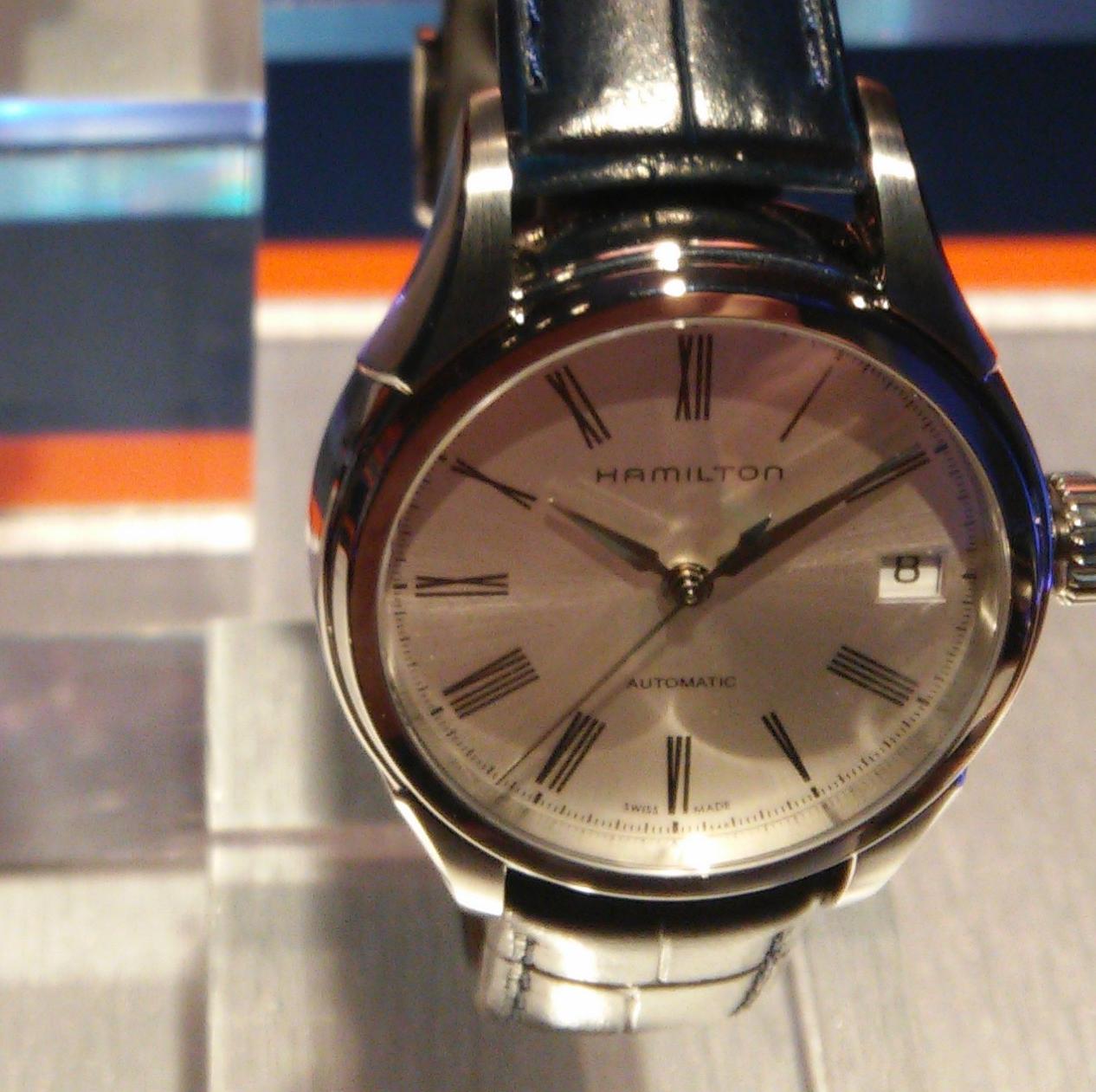 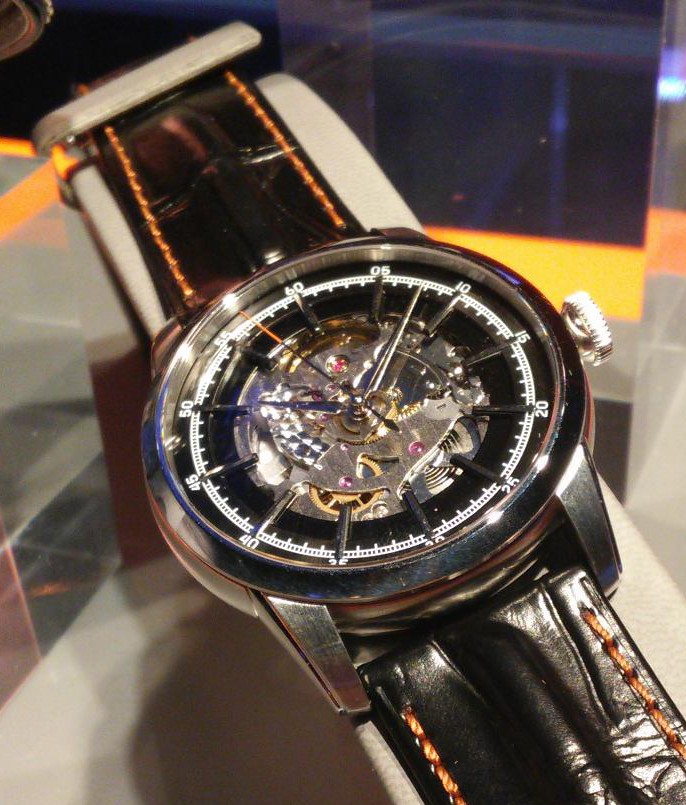 5. A skeleton watch at €1,045. This piece will be launched in October 2015, a good-looking skeletonized version of the existing 42 mm Railroad. They are also launching the Jazzmaster Skeleton at €2,195, a women’s watch with 34 mm automatic with strap in blue satin. All this is interesting for several reasons. It shows a high degree of coordination with Swatch Group movement maker ETA, which makes movements that are personalized to the brand, and now skeletonized as well. It shows a special interest in mechanical watches for women. And lastly, it shows considerable attention to the newest and potentially widest area of the market, a younger age group of people who are nonetheless fascinated by mechanical watches. Hamilton’s very democratic approach to watchmaking is illustrated by the Air Zermatt Limited Edition of the Khaki TakeOff. Just 60 of this version of the TakeOff were made, with the yellow trim of the standard watch replaced by the red of Air Zermatt. Incredibly, the price of this collector’s edition was exactly the same as the normal edition. It celebrated the first ascent of the Matterhorn, and the caseback of each is numbered and engraved with one of the 4000-metre peaks visible from the Matterhorn. 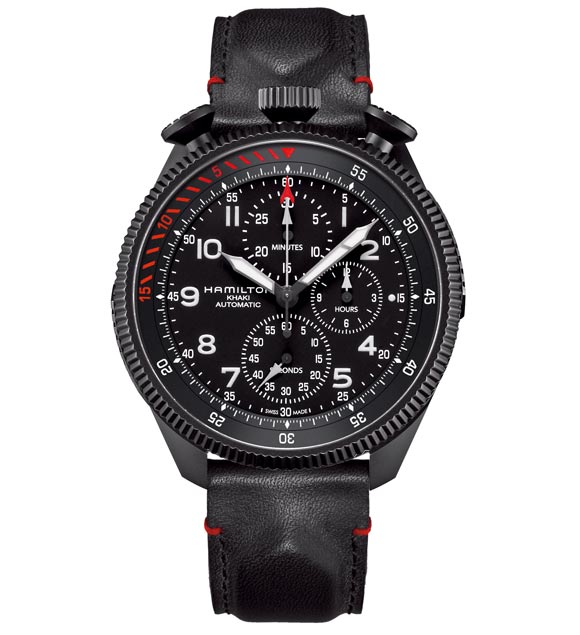