Both Jaeger-LeCoultre and Jaquet Droz have presented women’s watches using versions of orange aventurine or sunstone for the dial. Aventurine is a quartz mineral with inclusions that give it a glistening effect. Van Cleef & Arpels used the blue variety of aventurine in the Midnight Planétarium and the Lady Arpels Heures Filantes, in which the shiny specks suggest stars in the night sky. Sunstone is a material that looks very similar, but that is in fact made from glass with flecks of metal mixed in with it. Made using orange aventurine and sunstone respectively, the new Jaeger-LeCoultre and Jaquet Droz pieces are closer to the sun in terms of imagery, and they also connect to the astronomical theme that was one of the important trends in new watches presented at SIHH, where another material seen in a couple of pieces was meteorite rock.

The Rendez-Vous Celestial by Jaeger-LeCoultre was previously made in blue, but in this piece, the Bordeaux aventurine used for the dial shimmers in tones from ochre to red and orange, depending on how the watch catches the light. The case is in pink gold, with diamond-set bezel. The external fixed part of the dial has a delicate guilloché motif, while the rotating disc at the bottom has a sky chart and rotates slowly, with each interval on the scale corresponding to 23 hours, 56 minutes and 4 seconds, the mean astronomical length of a day. It therefore becomes a sort of astrological annual calendar. The star that projects inwards from the bezel can be adjusted all the way around the dial using the crown at 4 o’clock to set a time of your choice, as a reminder for a meeting (rendez-vous). The watch is powered by the Jaeger-LeCoultre Calibre 809/1 automatic movement, with 40 hours power reserve. The case is 37.5 mm in diameter. Reference Q348 25 60. 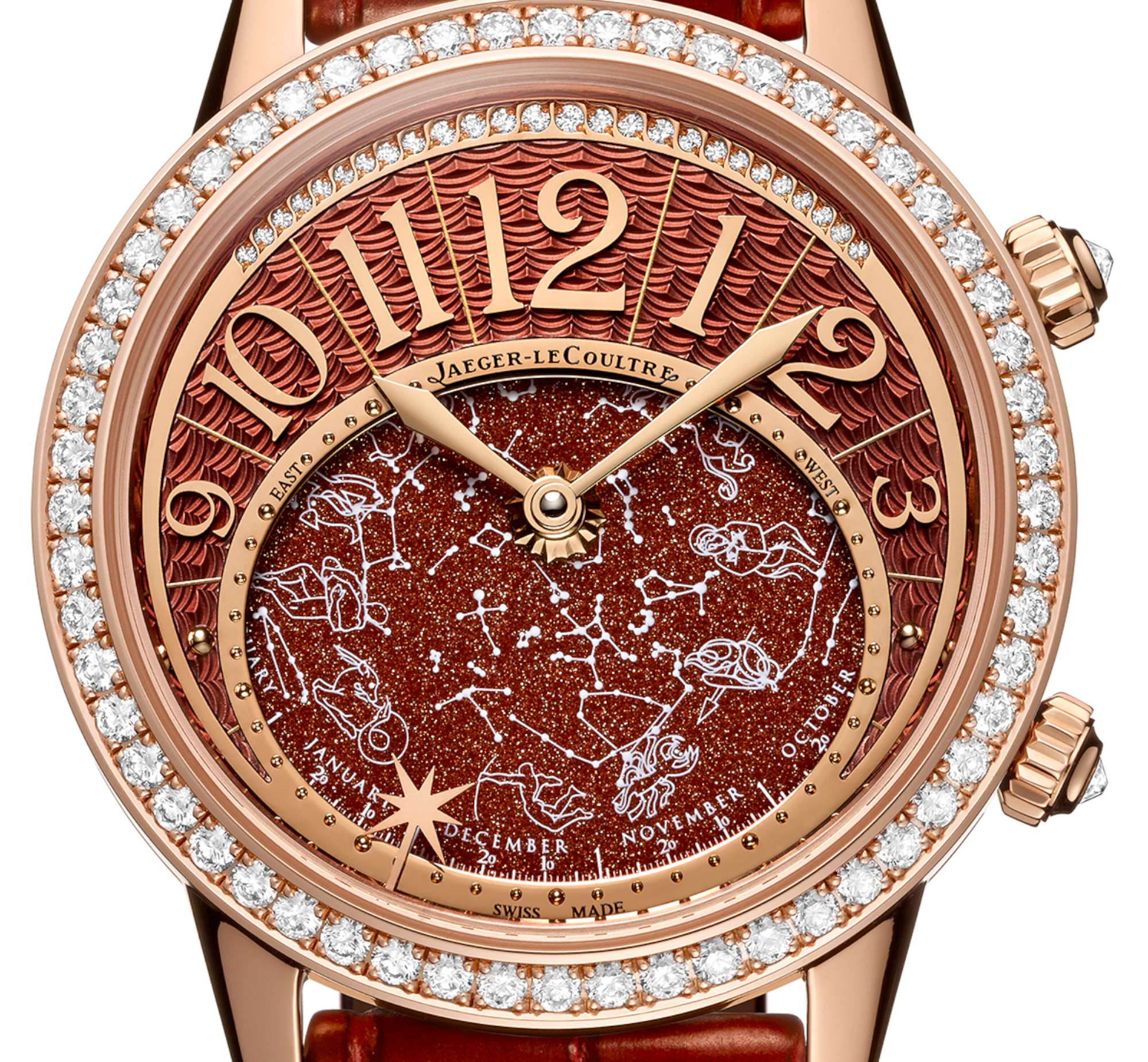 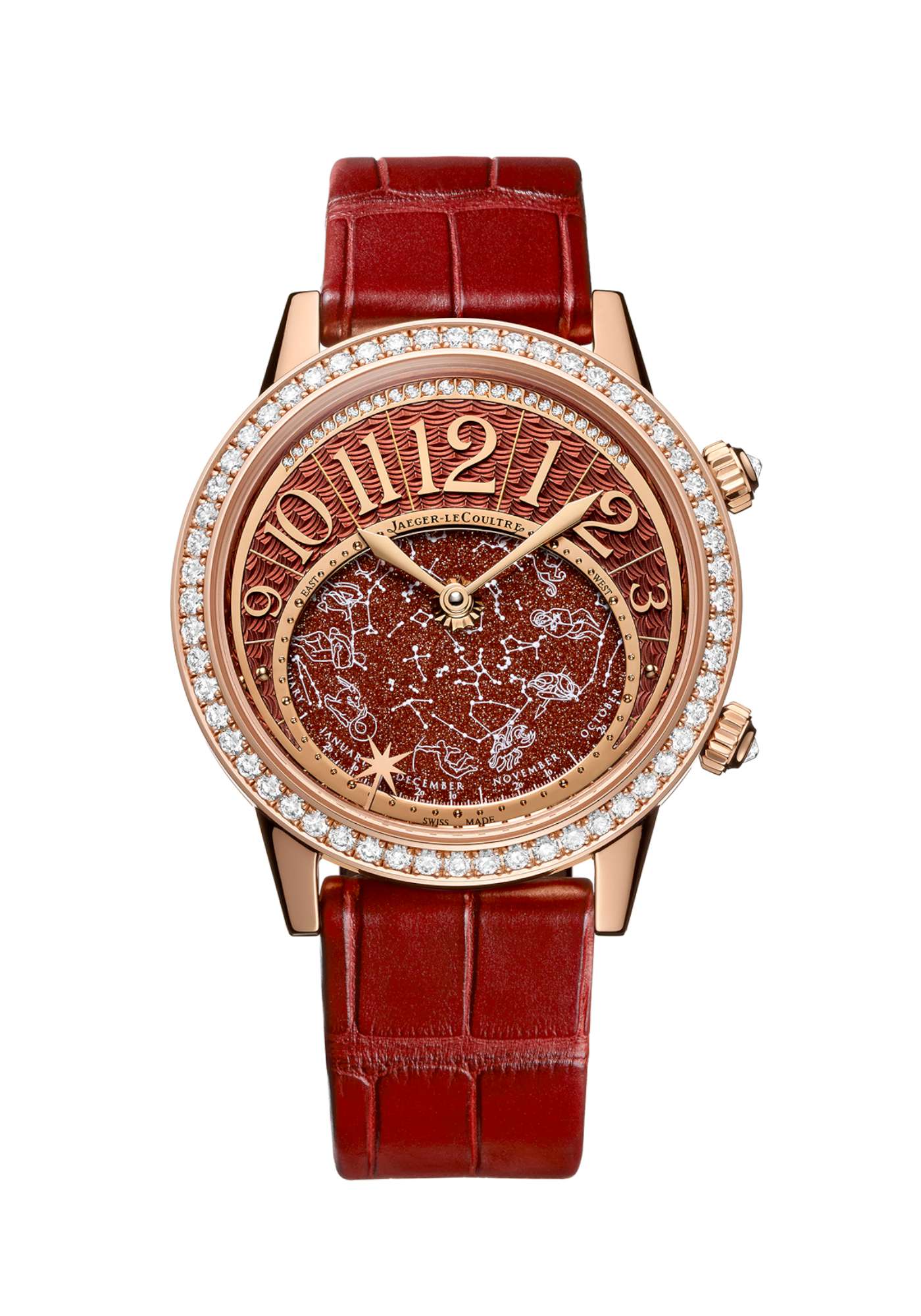 Jaquet Droz have used sunstone – a material invented accidentally in 17th-century Venice, when a glassmaker spilt some metal powder into a batch of vitreous paste – in three watches, the Grande Seconde Cerclée, the Petite Heure Minute 35 mm, and the Lady 8. The Grande Seconde Cerclée, reference J005003271, is in red gold with sunstone dial, and a 35-mm case set with 232 diamonds; the Jaquet Droz 2653 automatic movement provides hour and minute functions. The Grande Seconde Sunstone, reference J014013340, contrasts the sunstone with mother-of-pearl used for the two subdials; this piece is larger at 39 mm, with the Jaquet Droz 2653 automatic movement. The Lady 8 Sunstone, reference J014503271, has a dome-shaped dial in a red gold, diamond-set 35 mm case, in which there is the Jaquet Droz 1153 automatic movement . In this piece, the sunstone ball at 12 o’clock rotates freely and becomes a sort of game, something to do in odd moments. Each model has a power reserve of 68 hours, and each is a limited edition of 88 pieces. 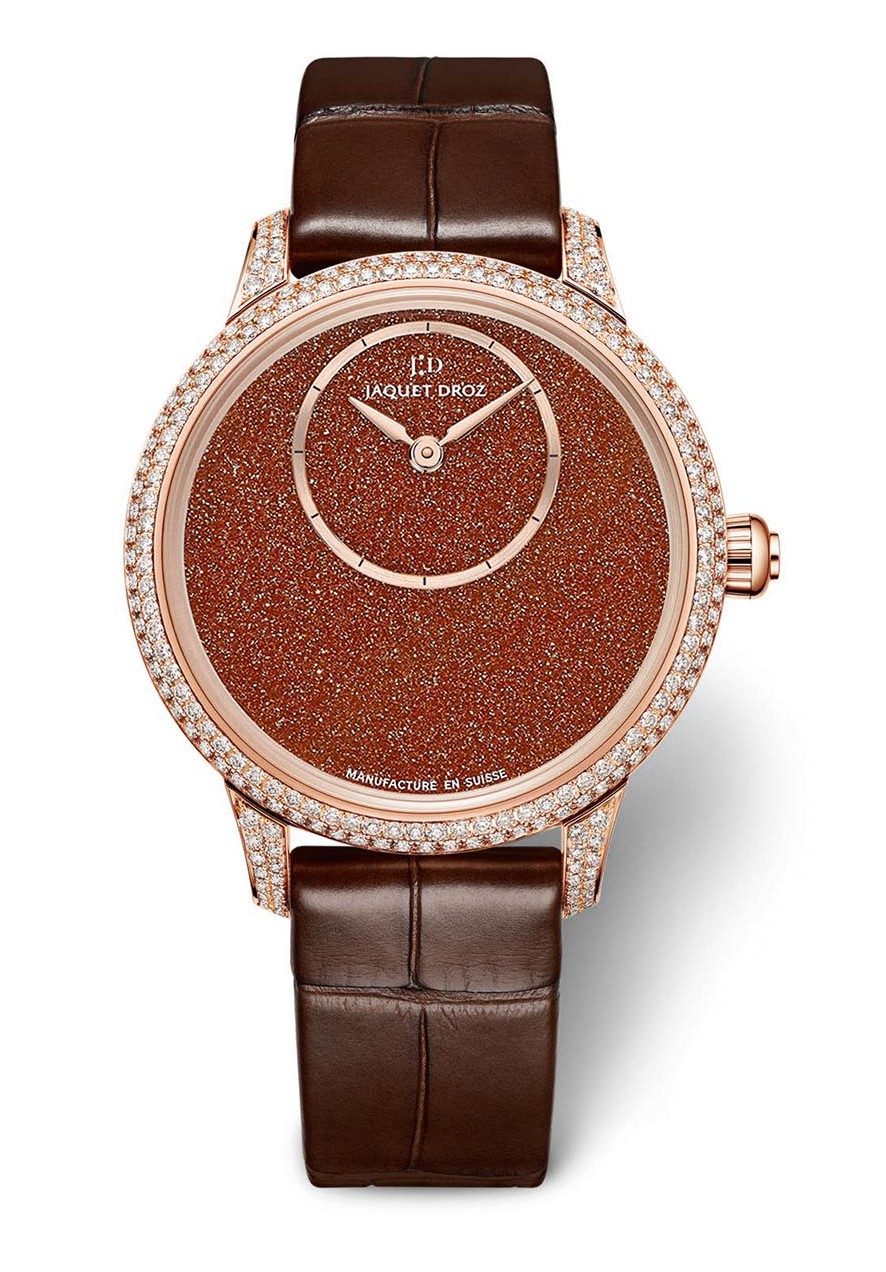 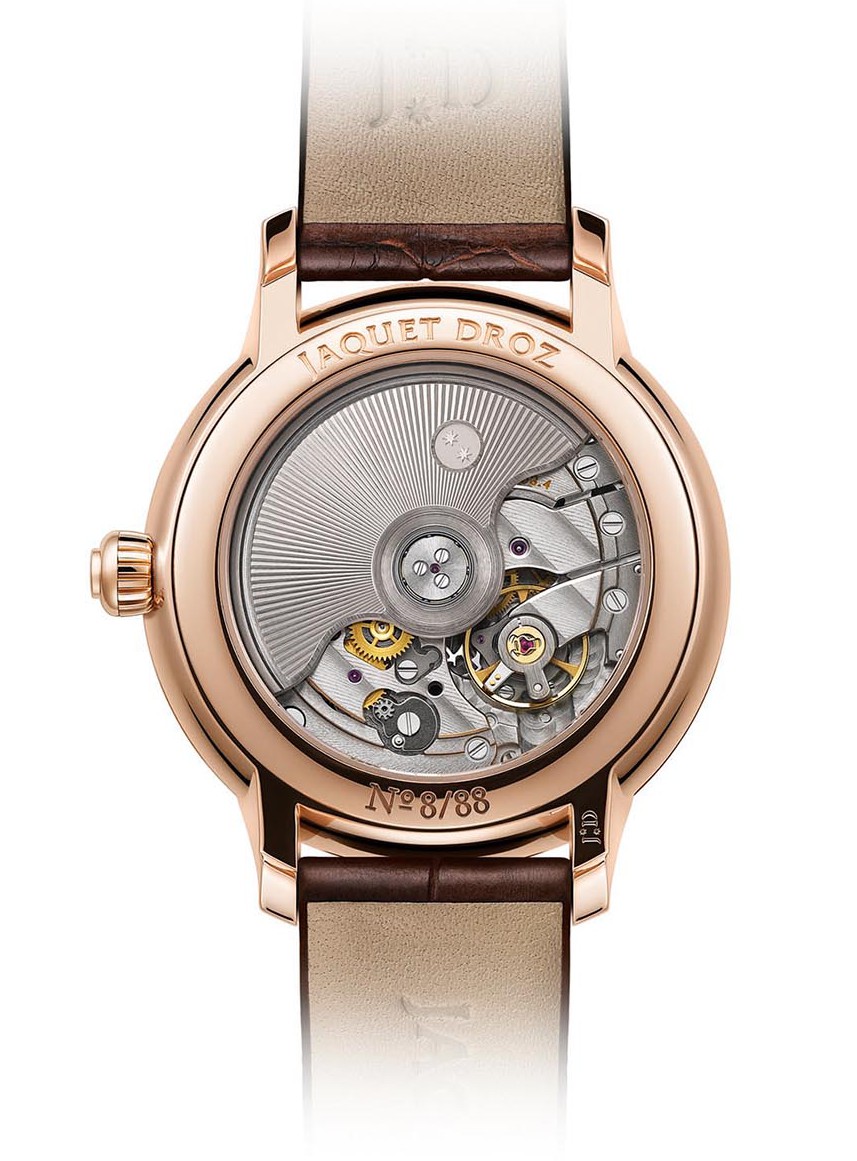 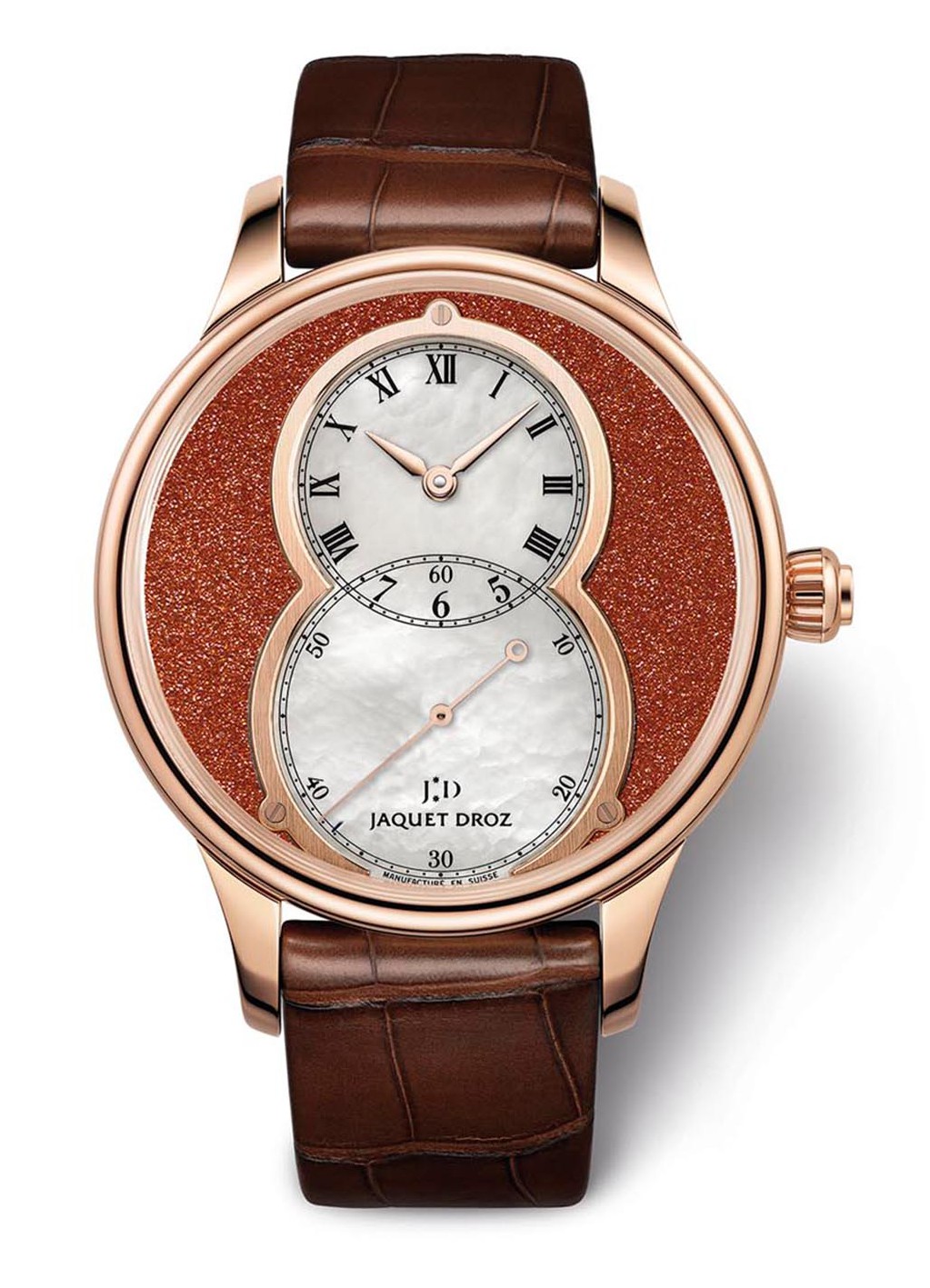 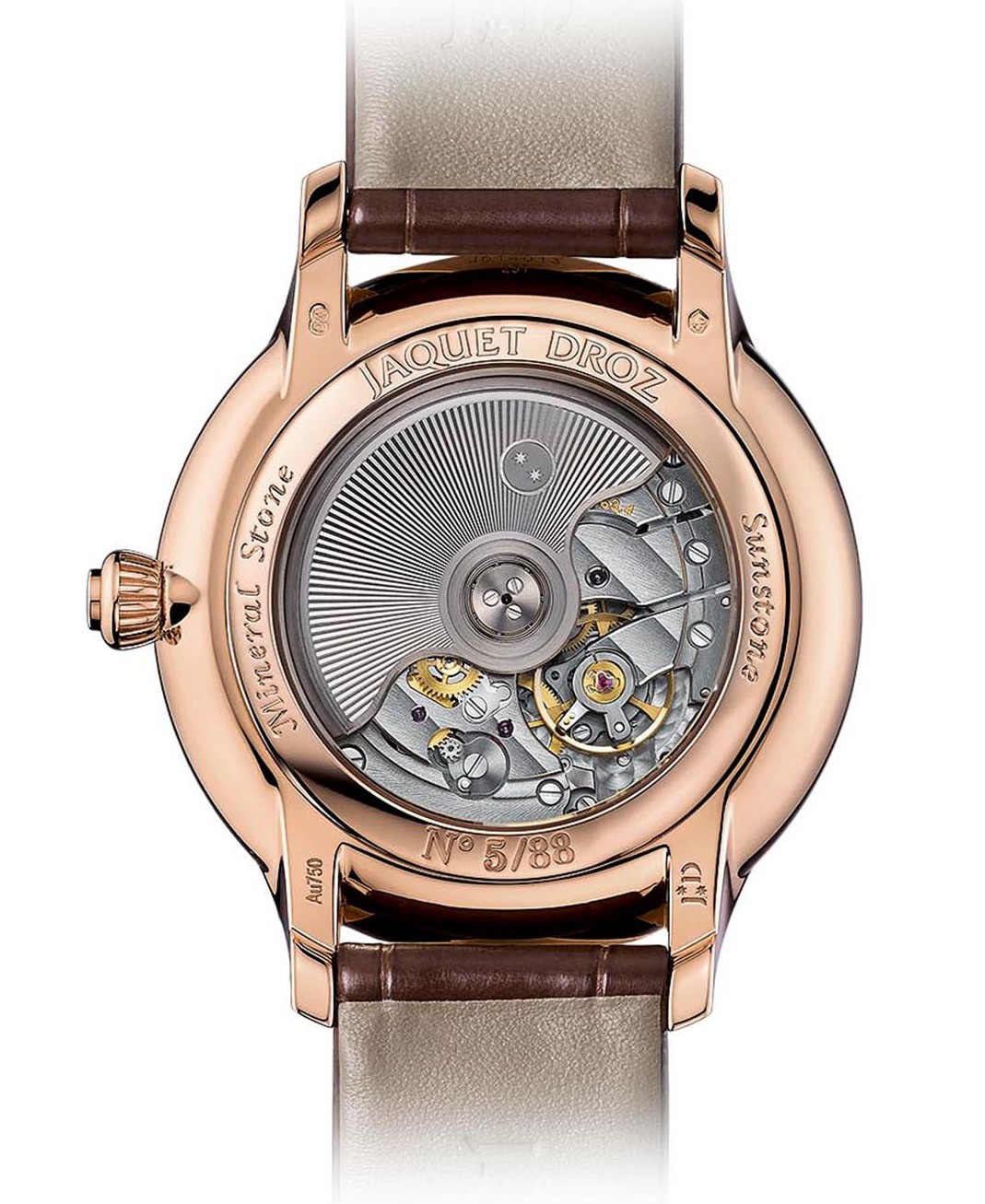 Below, the Jaquet Droz Lady 8 Sunstone: 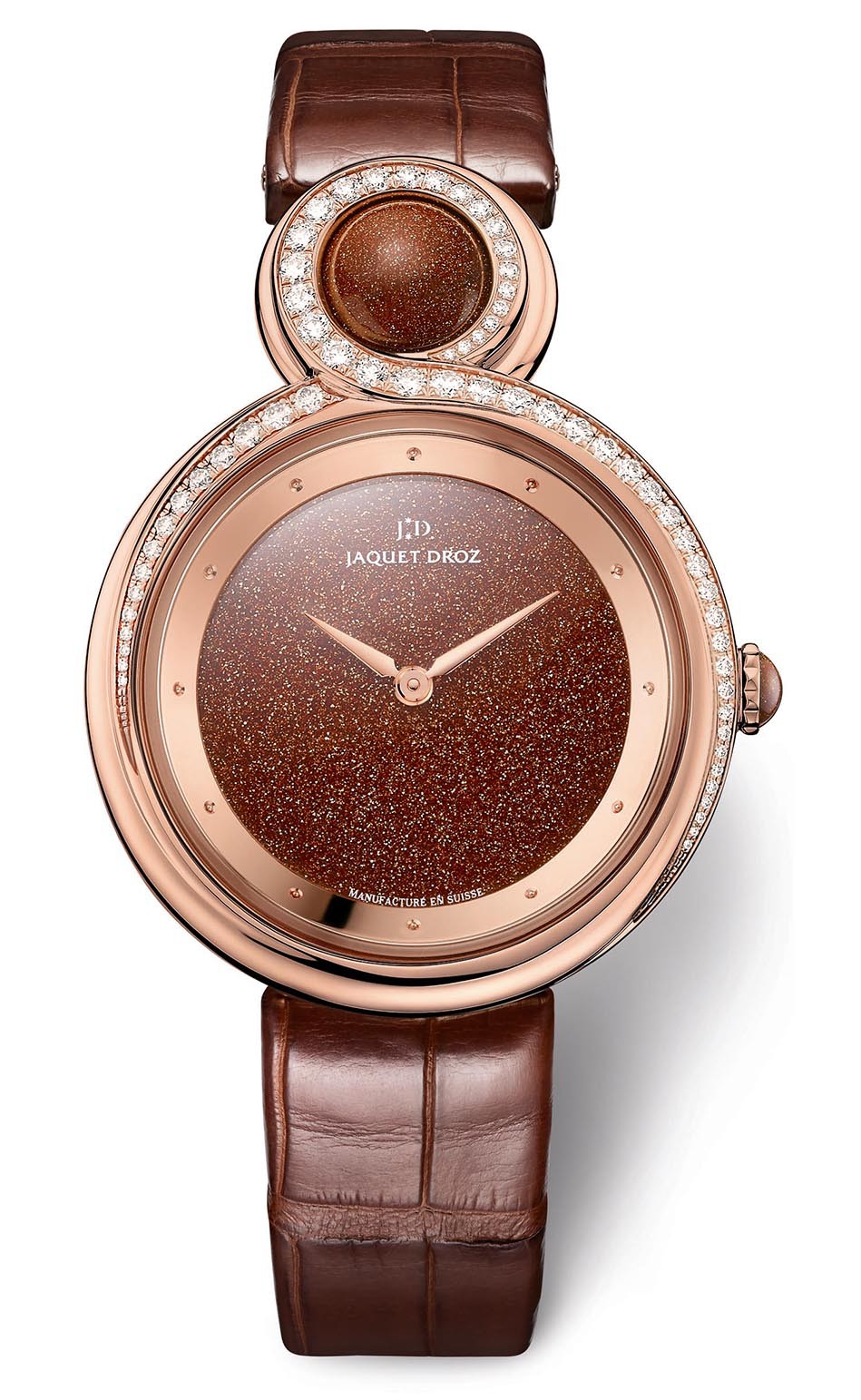 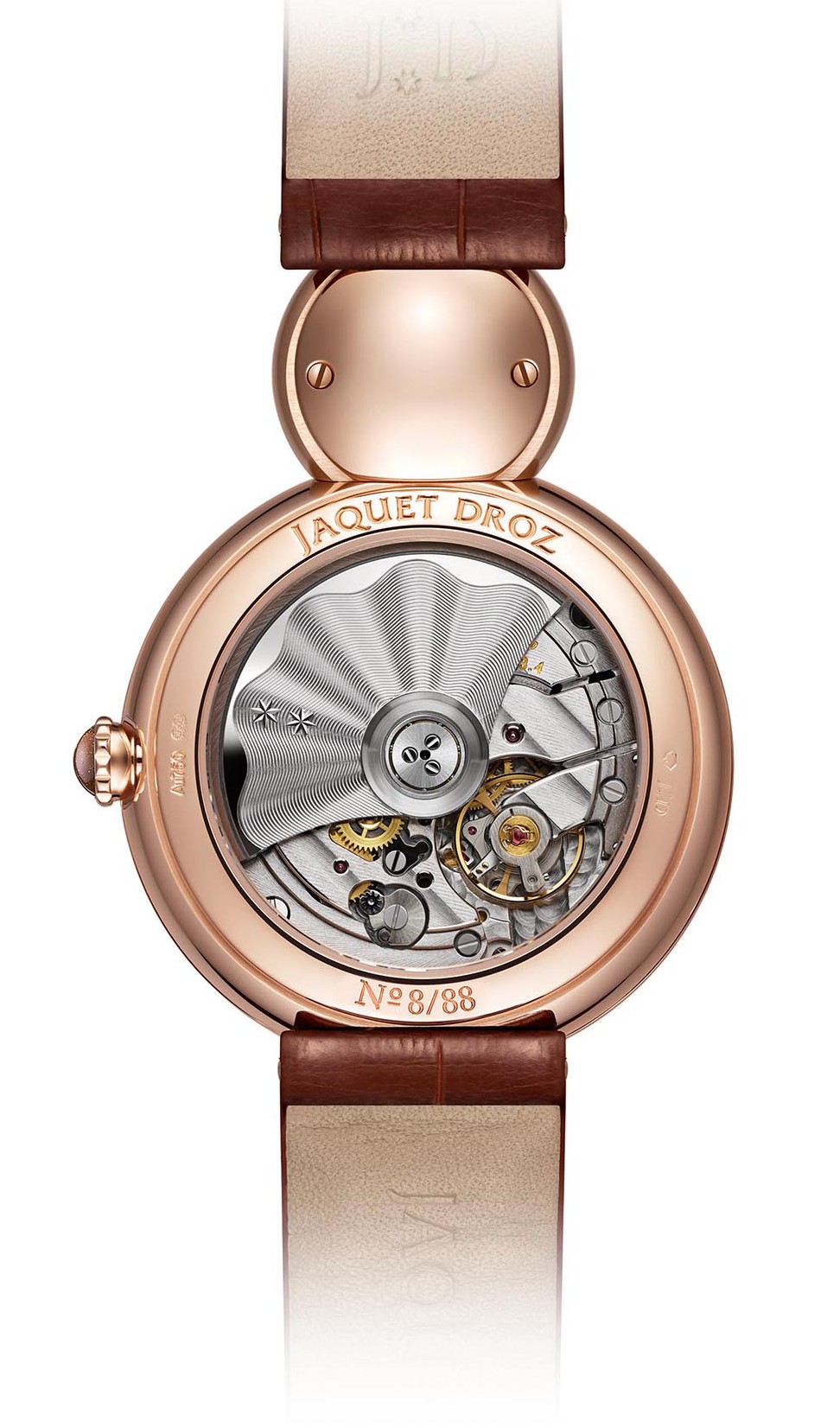