This is a quartz watch, which was demonstrated enthusiastically by Hamilton CEO Sylvain Dolla at one of the brand’s customary pre-Baselworld presentations. It has some interesting features that only quartz can provide. It was designed in cooperation with aerobatic pilot Nicolas Ivanoff and has something of the classic pilot’s watch looks, black dial, large numerals, plus a lot more. The quartz makes the watch very playful, the movement of the hands becoming a sort of dance as you switch from one function to another. 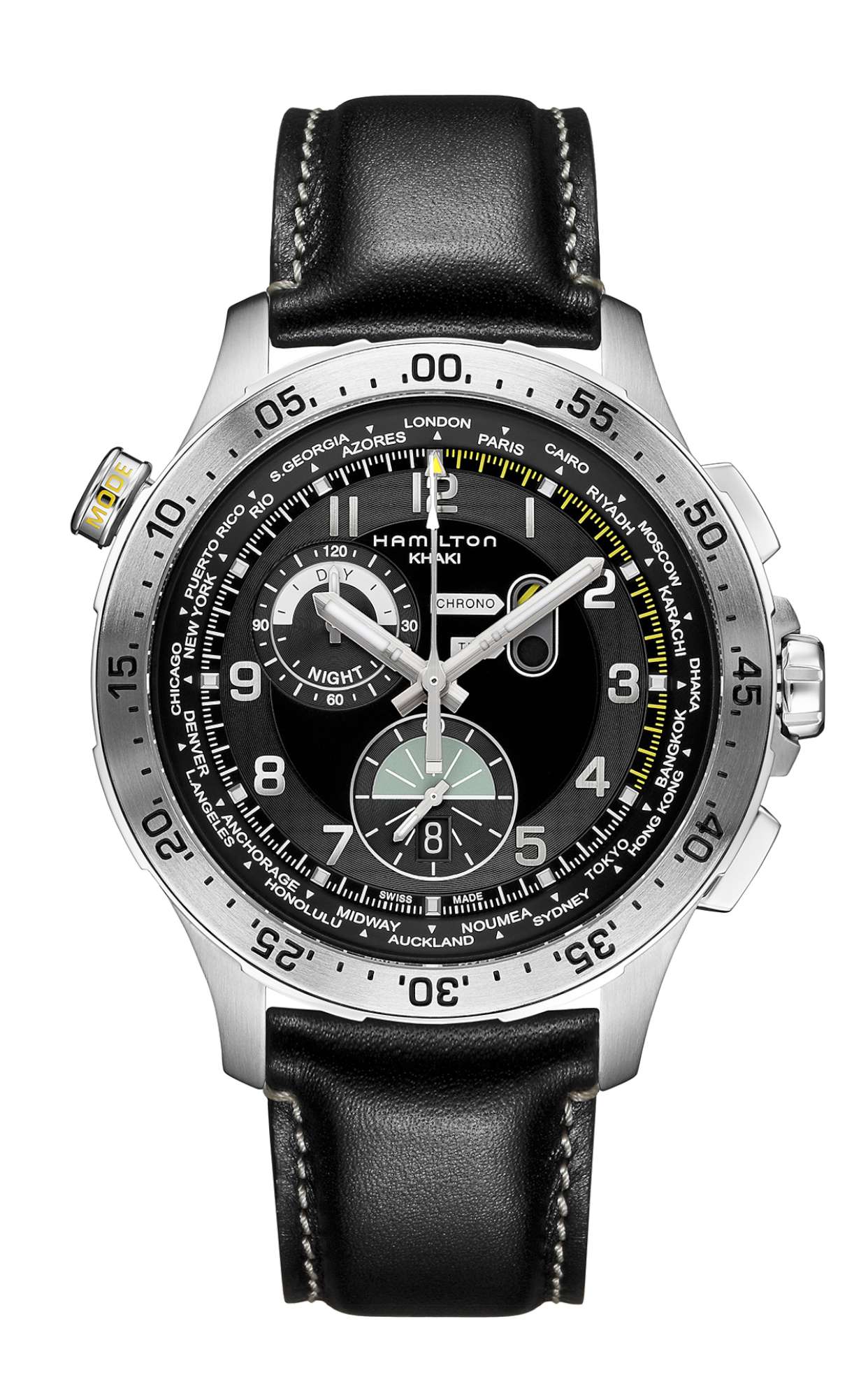 It looks complicated, and this was intended: for some of the brand’s watches it is one of the hallmark visual characteristics, as in the X-Wind presented in 2014. A pusher at 10 o’clock selects the function, chrono or time, which is then displayed by the indicator at 2 o’clock with the hatched yellow visuals typical of military planes. To get to the chrono, you have to press and hold the mode selector for 3 seconds, on which the two slender central hands, one with a white arrow tip and one with a yellow tip, return to the zero position. These two hands then become the chronograph timer, controlled by the usual pushers on either side of the crown, but, through Ivanoff’s contribution, the first four minutes on the scale are shown in yellow. This is because in aerobatic freestyle competitions, the four-minute time is the limit beyond which you start accumulating penalties that lower your score. Minutes are also counted on the subdial at 10 o’clock, for a total of 120 minutes. 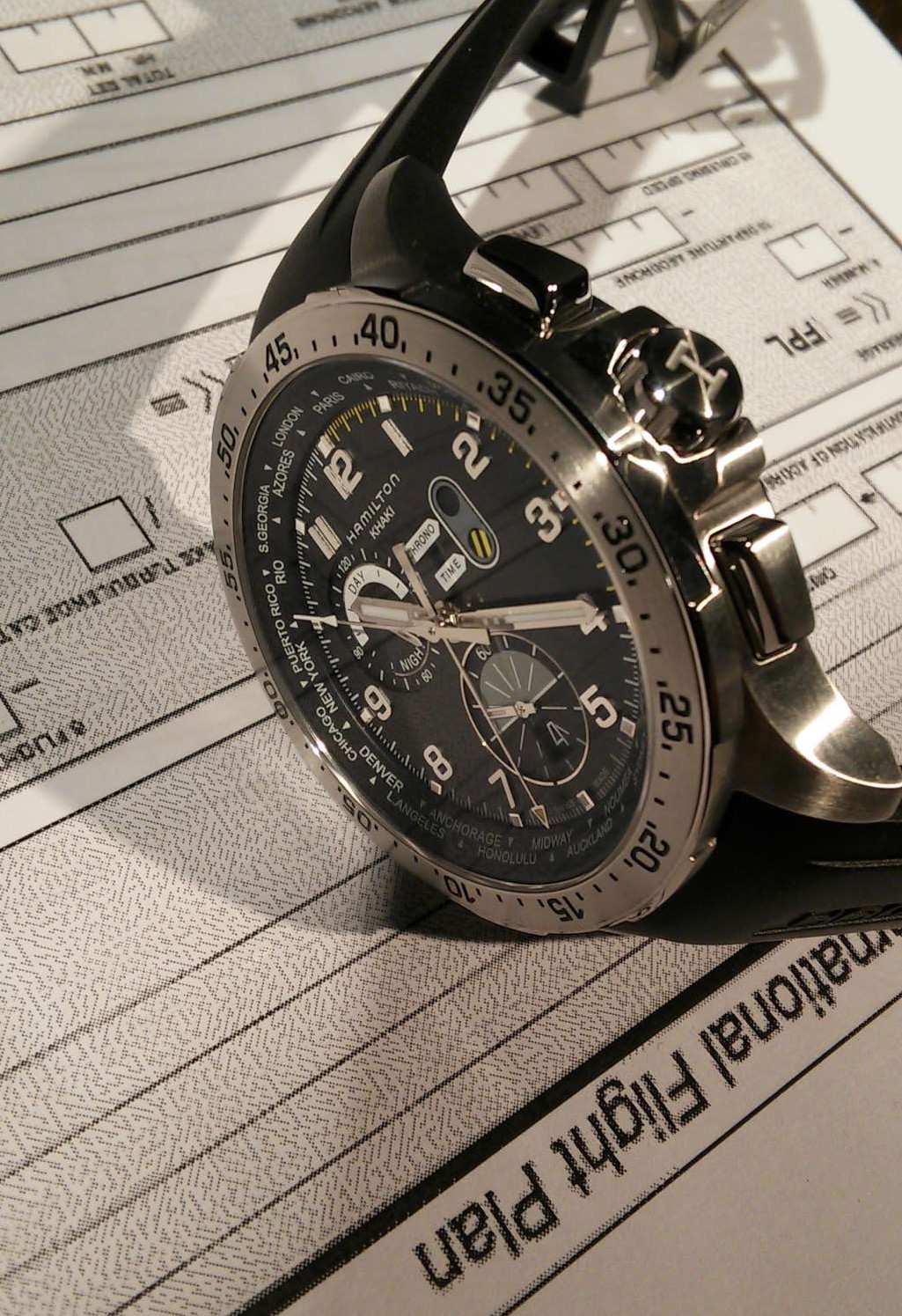 The world timer function is simple to use. Home time is displayed by the hour and minute hands, and time in the second time zone is shown on the subdial at 10 o’clock, which is divided into day and night. The time zone that you have chosen is shown by the yellow-tipped central hand which points to the respective city on the bezel. To change the time zone, you just use the chronograph pushers to go forwards or back. Another useful function is that a brief press of the pusher at 10 o’clock shows UTC time on the main watch hands.

The subdial at the bottom of the dial is for continuous seconds, with artificial horizon-type design and a date window. As it’s quartz, the watch also has a perpetual calendar which keeps track of the different number of days in each month, even for leap years, though the information is displayed only in the form of the date that never has to be corrected. The watch is in a steel case, large at 45 mm, 100 metres water resistance, with a rotating bezel. The price of the watch is about €1,095, for which you are paying for the new case, the unusual functions, and the new H-41e quartz movement. The image below shows the three strap options. 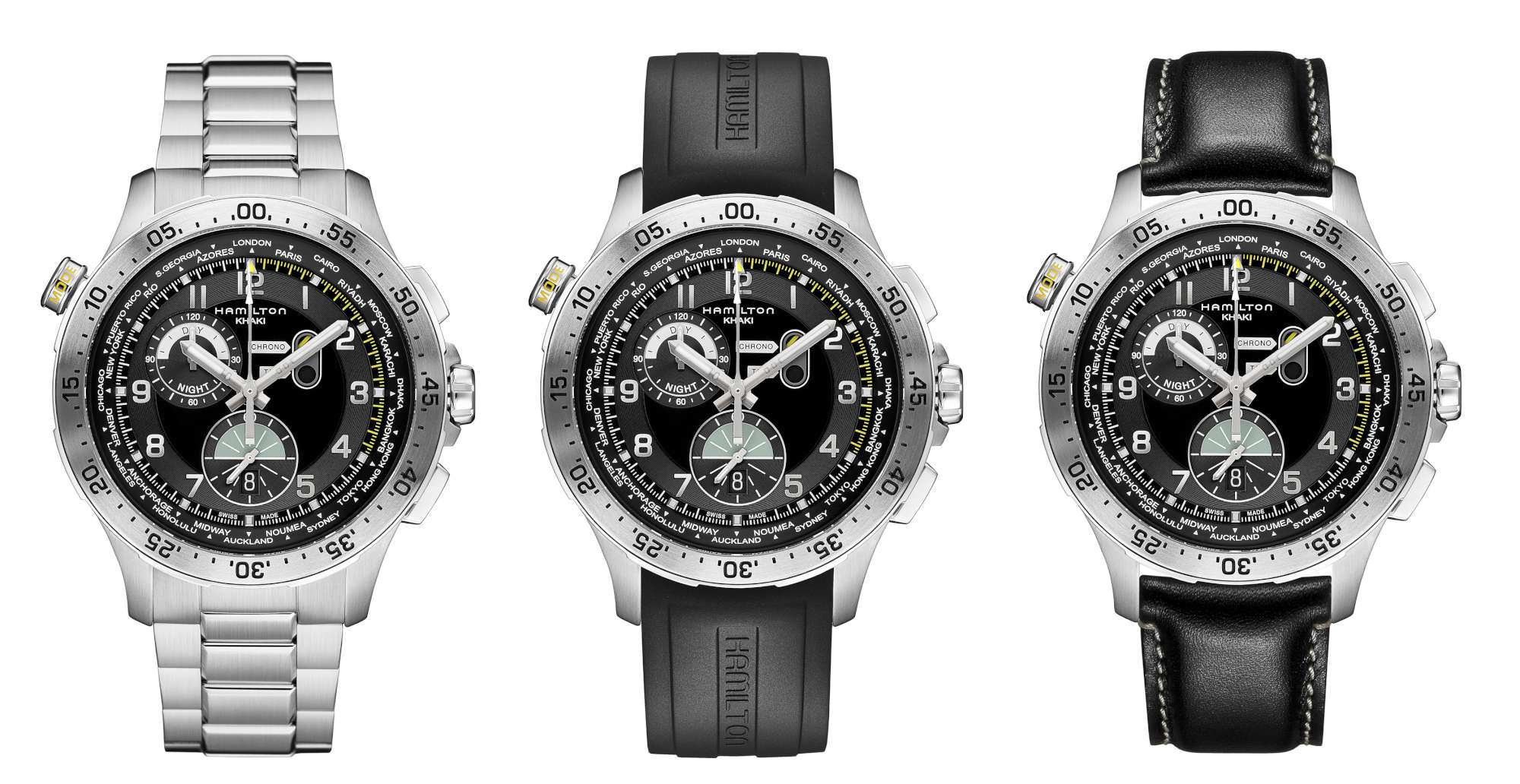 Here is a video of Nicolas Ivanoff pretending to be the young Luke Skywalker in the Star Wars Phantom Menace pod race: 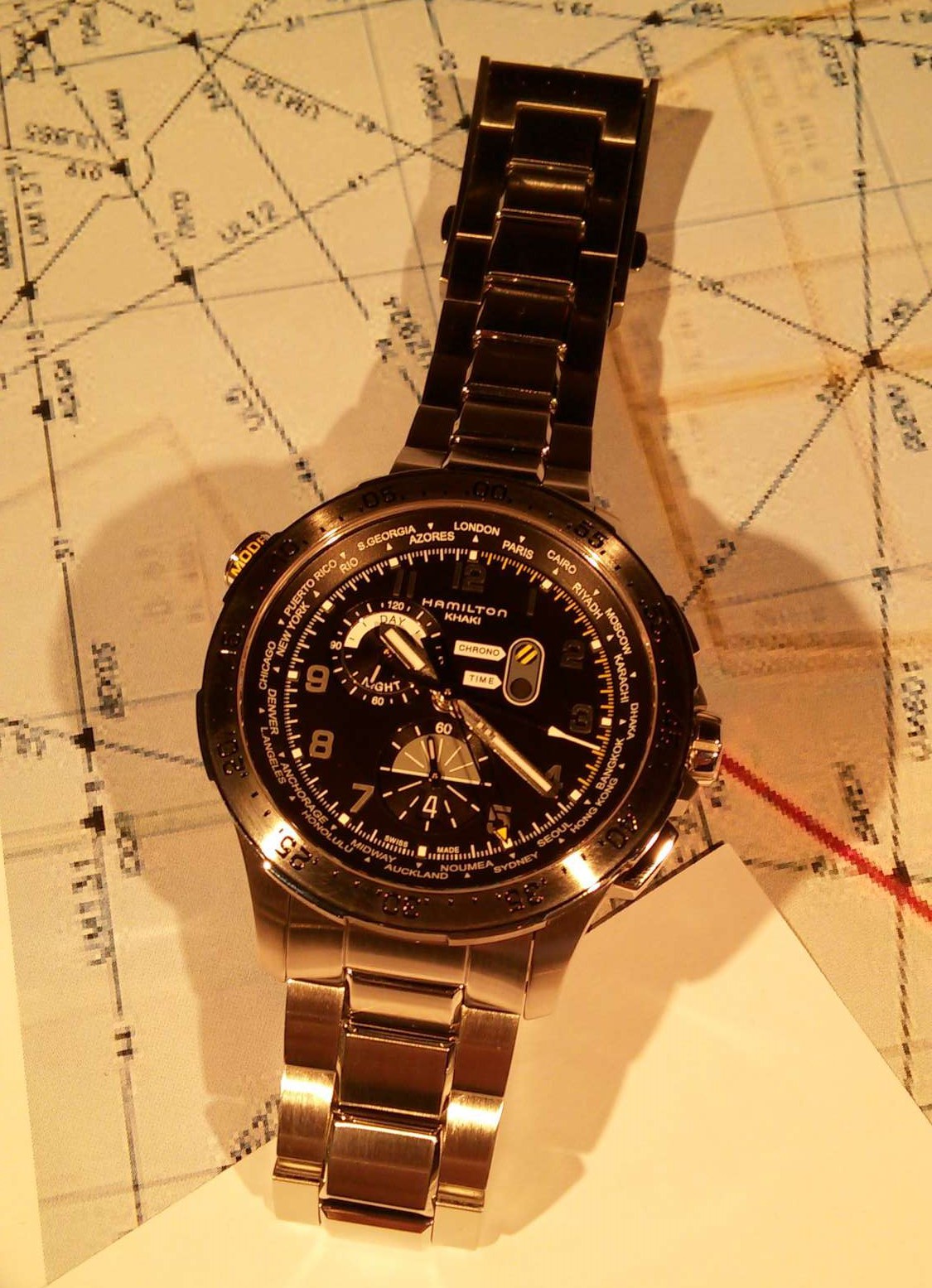 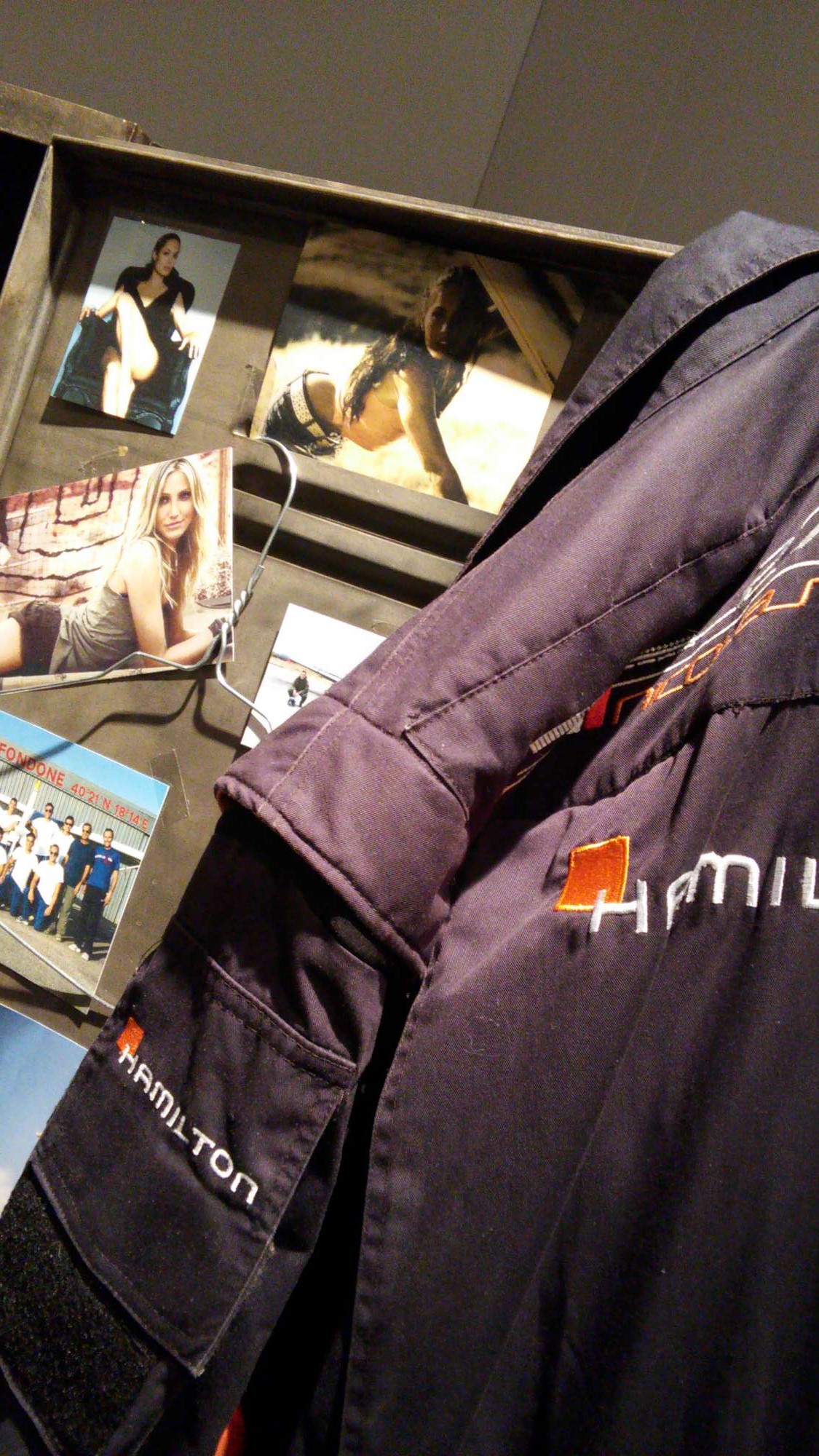