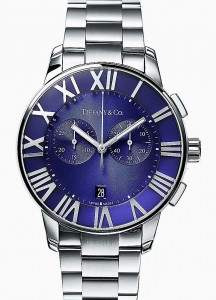 Part of the Atlas collection by Tiffany & Co., a stainless steel chronograph watch with quartz movement

In a brief press release issued on 4 March 2015, the Swatch group said that the District Court of Amsterdam “set aside” the arbitration award issued on 21 December 2013, on “purely formal reasons” that have been contested by the Swatch Group, who will file an appeal. The final decision will be taken by the Supreme Court of the Netherlands, at the end of a process that could take 18 months or more.

The 2013 decision by the Dutch arbitration panel ruled that Tiffany & Co. should pay 402 million Swiss francs damages to the Swatch Group. The two parties had started working together in 2007, because Tiffany wanted to expand its jewellery watch business by outsourcing design, production and after-sales service, while Swatch Group, which at that time didn’t own a major jewellery watch brand, wanted a foothold in the gems sector. According to plans, the joint venture would have continued for 20 years. And so Tiffany & Co. Watches was formed, with CEO Nayla Hayek, and their first collection of watches was presented at Baselworld in 2009. Probably, Tiffany were not happy with the positioning of the watches, and Swatch weren’t happy that Tiffany weren’t doing much to market the new pieces, and so the two sides ended up sueing each other in 2011. They probably decided on arbitration to guarantee confidentiality.

The money that Swatch Group received from Tiffany & Co. enabled them to purchase Harry Winston – and Nayla Hayek took over as CEO of the famous American jewellery brand. Today, Tiffany is saying that their company would “seek the return of the damages paid by them under the Arbitration Award.” Swatch Group on the other hand say that “The judgement of the ordinary court of first instance is not enforceable and has no material consequences for the Swatch Group.”

As we are approaching Baselworld, we are all looking forward to see the new products by the various Swatch Group brands, and by Tiffany, who will also presumably be launching a new collection of watches in the near future. At present the only information available is that Tiffany filed a new trademark, Tiffany CT60, on 16 January 2015, in the watches category.