On the face of it, they seem to be quite a long way apart. But the precision metalwork that can be found in both fine watchmaking and gunmaking is a common denominator, as suggested by the terminology: barrel and calibre, to name just two terms. In Switzerland and other locations, the craftsmen who worked on the pillar plates of early clocks also engraved the locks of fine shotguns. Auguste Lebeau made just guns, founding his company in 1865 in Liège, Belgium. His business was taken over by Ferdinand Courally in 1896, and the company went on producing prestige weapons. In that period, Lebeau-Courally were banned from shooting competitions because their guns were just too good. 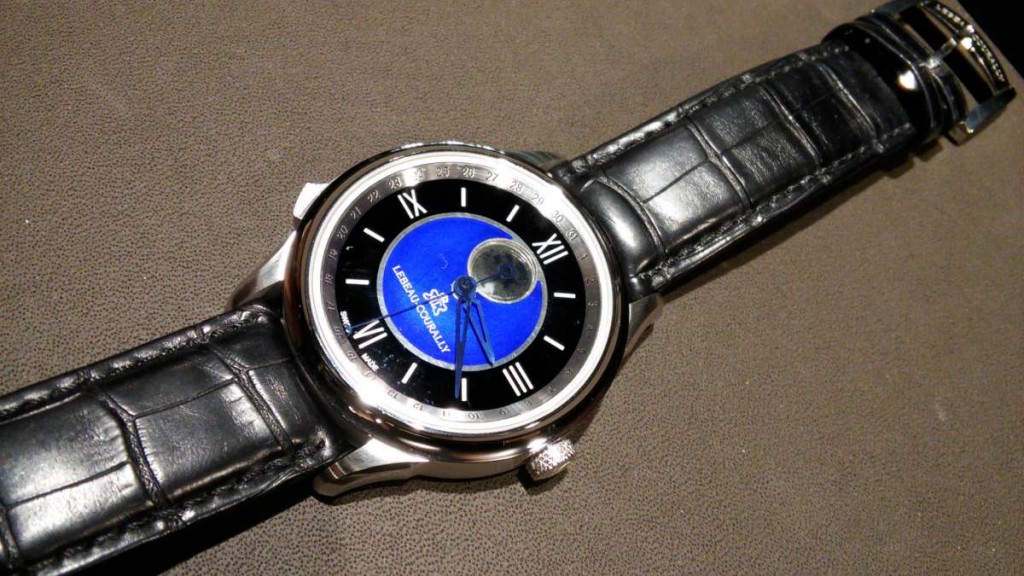 All that was a long time in the past. About five years ago, Lebeau-Courally bought a watchmaking company called IMH based in Le Locle, one of the last independent watchmakers capable of making all parts of the watch except for the watchglass and strap, and in 2010, they launched their first watch collection. From the start, their watches incorporated some features taken from gunmaking, such as the clé de fusil, the lever that opens the barrels on a shotgun, wihich in the first generation of Lebeau-Courally watches simply hid the serial number on the case side, the fluting details on the lugs that recall the rifling of a bullet, and the guilloché patterns on the crown. 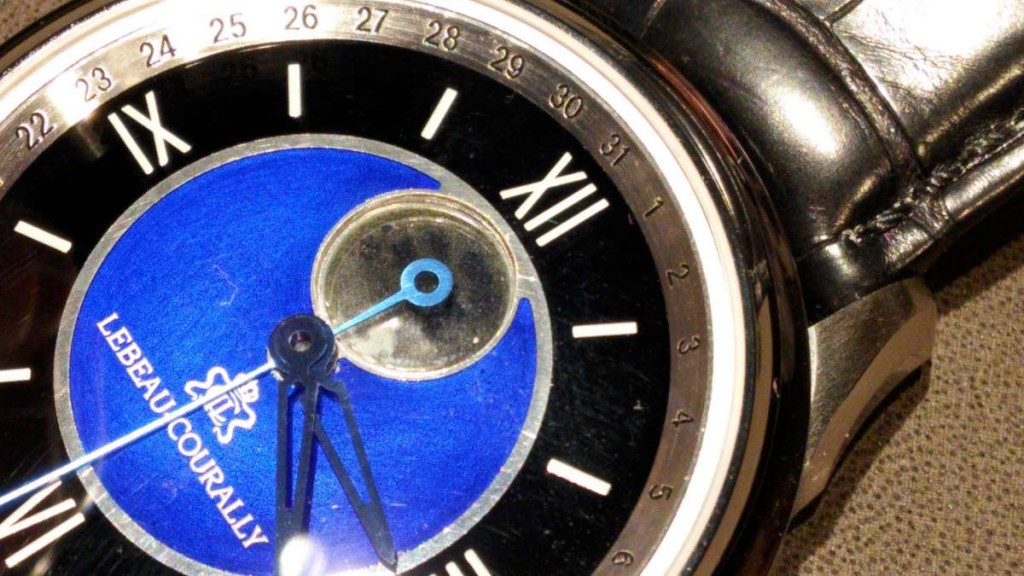 The major piece this year is the Phase de Lune, which incorporates over 6 years development work by Fabien Lamarche. The moon phase is beautifully executed, with a semi-transparent screen engraved to produce the effect of lunar craters, and a display that, like the real moon, reveals the part of the moon in shadow as well. In other words, it’s not just a disc that disappears behind a screen, but a dark shadow that gradually covers the moon disc. The moon phase display is highlighted by the blue enamel disc on the inner part of the dial – the external ring on the dial is in black enamel. Though the display is at 6 o’clock, it can also be supplied in a 3 o’clock or 9 o’clock position, so that the appearance of the moon is more similar to the moon’s actual appearance in different parts of the world. Each watch has a slightly different moon display because the sapphire disc is hand-engraved. The moon phase has an accuracy greater than the usual 58-tooth approximation of a 29.5-day lunar month, and the movement approaches the real figure of 29.3 days, and needs adjustment only once every two and a half years. The date is shown by a third hand on a scale on the inside of the bezel. In this piece, the clé de fusil has a function, adjusting the date and the moon phase display. It has a 43 mm case in rose gold or grey gold; the movement runs at 28,800 vph (4 Hertz) and provides a power reserve of 100 hours, about 4 days. The price of the watch is €42,000 (including VAT). Read more about Lebeau-Courally here. 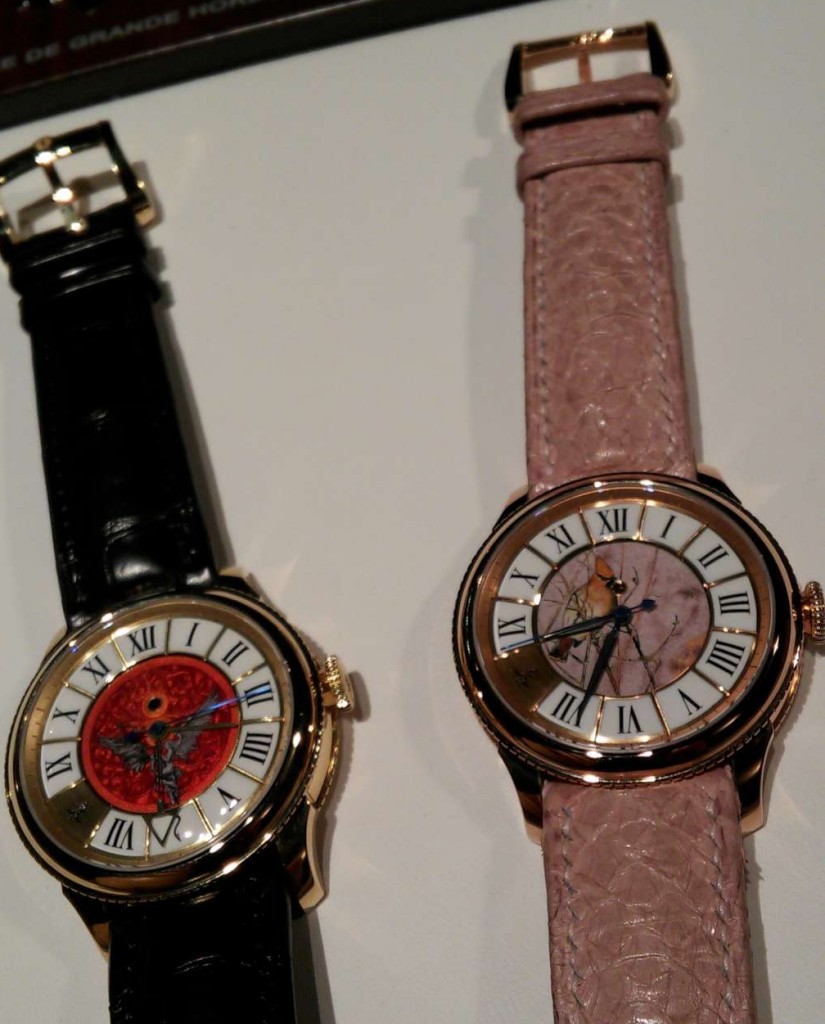 The two new pieces by Julien Coudray 1518 are the Complication 1515 and 1528, with intricately enamelled dial. An unusual feature of Julien Coudray 1518 watches is the small circular window above the central pivot, in which a gold drop appears after 4 years operation (which corresponds to about ten years of actually wearing the watch), indicating that the watch should be serviced. Read more about Julien Coudray here. 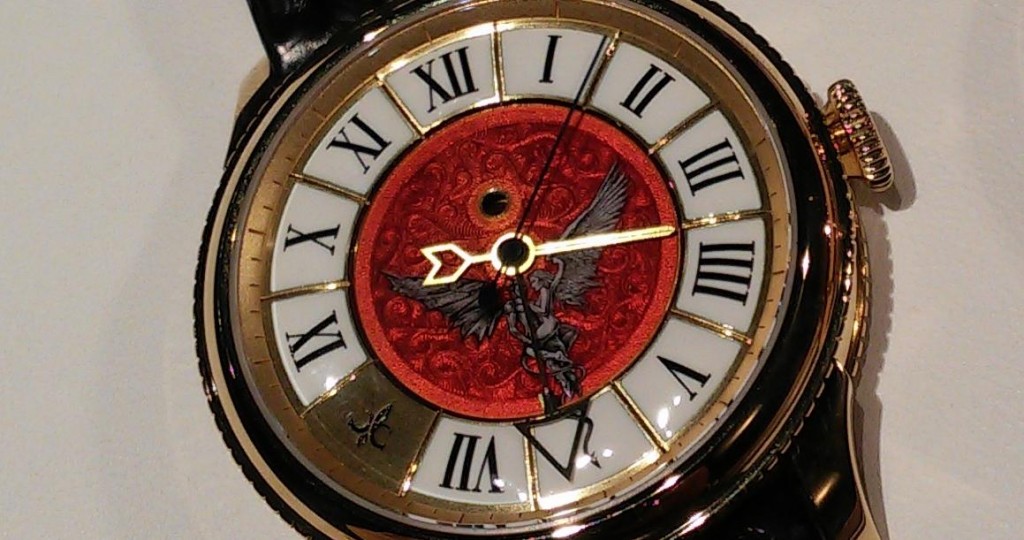