It was probably one of the most eagerly awaited returns in watchmaking this year. After their tangle with Swatch Group, we were all waiting to see what the new Tiffany watch collection, CT60, would look like. It was unveiled on 2 April 2015 with a series of very classical designs.

Expectations were high because Tiffany is one of the brands enjoying the highest degree of public awareness. There isn’t a film titled “Breakfast at Harry Winston’s”, for example. Apart from the Truman Capote book and the film that was made from it, Tiffany is also universally known for the robin-egg blue colour of its jewellery boxes, and the Tiffany setting that puts diamonds in the best light possible.

Tiffany & Co. owned their own watchmaking facility in Geneva for a brief six years about 150 years ago. Founded by Charles Lewis Tiffany in 1837 as jewellers, the company began selling timepieces in 1847, and developed a partnership with Patek Philippe, sharing a workshop in Geneva with them. In addition, they acquired sole marketing rights for UK brand Charles Frodsham. Tiffany opened a store on 10 Grand Quai in Geneva in 1868, and then built their own watchmaking plant on Place Cornavin in the same city in 1874.

In 1880, Tiffany retreated from watch production when they sold their watch factory to Patek Philippe. This year therefore marks an important return, with a new watchmaking facility in Geneva (Tiffany & Co. Watch Center), and a boutique due to open on Rue du Rhone in Geneva in May this year. It will host one of the most famous diamonds in the world, the 128-carat fancy yellow Tiffany Diamond discovered in 1877 and bought by Charles Lewis Tiffany in 1878, in a show running from 18 June to 11 July 2015.

The watches themselves are a tribute to Charles Tiffany, with the customary haute horlogerie finish, sapphire casebacks, sunray dials with applied numerals and hour markers. They include a three-hander, which in the stainless steel version is the entry-level piece; a chronograph, and a calendar watch. They are all available in boutiques as from 2 April 2015.

The calendar watch is based on a Tiffany watch given by the brand to Franklin Delano Roosevelt who wore it at the Yalta conference in 1945. The Tiffany CT60 Calendar 40 mm Limited Edition (60 pieces) has a pink gold case with the same design as the historic watch, with date shown by a fourth blue-tipped hand on a scale with blue numerals at the edge of the dial, and months on a subdial. The watch is powered by the Dubois Depraz calibre 5933 movement, which can be seen through the rather narrow sapphire window in the caseback. There are two recessed pushers in the 4 o’clock position on the caseband, presumably for adjusting date and month. $19,000. 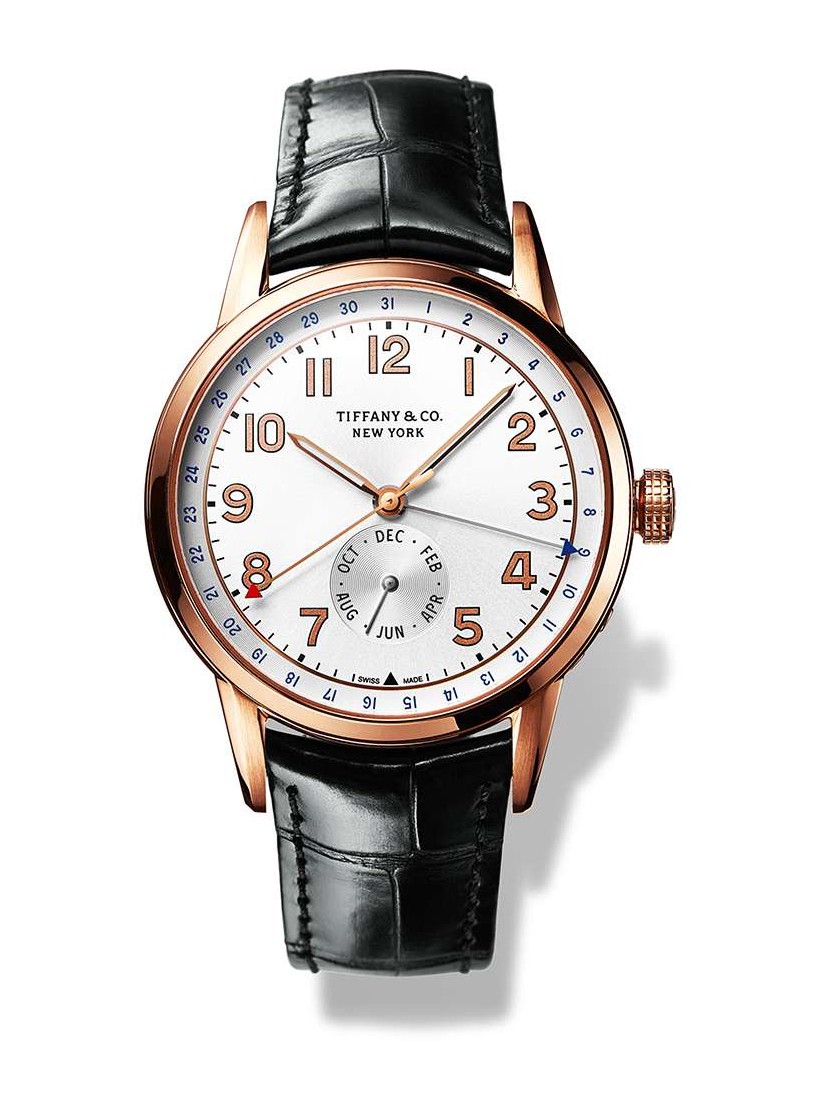 Below, the 1945 watch belonging to President Roosevelt, inspiration for the new CT60 Calendar. At that time, TIffany were no longer manufacturing watches: this piece was made by Movado, with their manually-wound caliber 375SC movement, a dial with date on the outside of the bezel, windows for day and month, and two pushers to adjust date and month. The watch is just 33 mm in diameter with a 16 mm strap. And so the design of the new CT60 collection can be traced to this 1940s Movado watch: 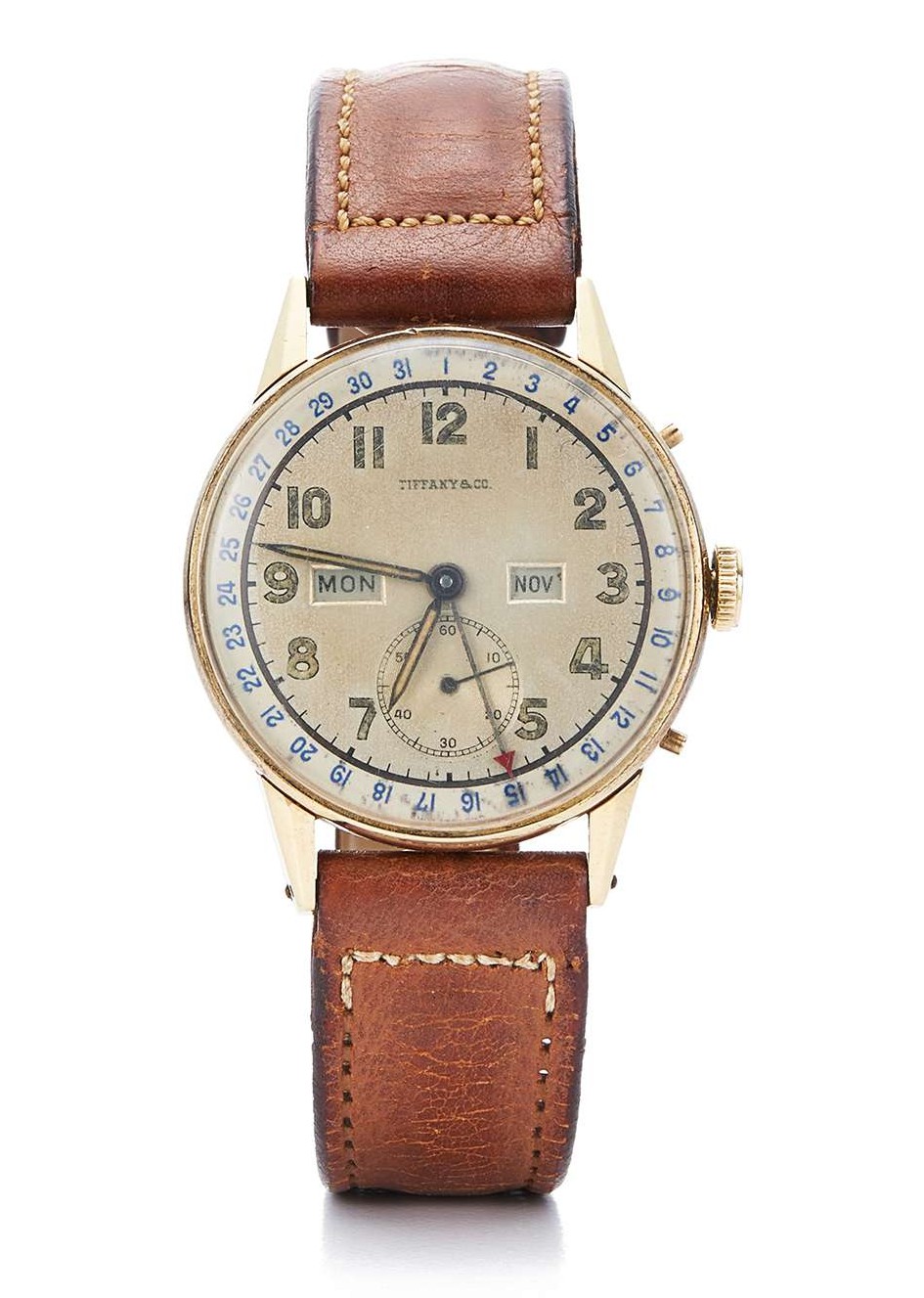 The chronograph is 42 mm in diameter, with subdials for continuous seconds and 30 chronograph minutes. The design is very traditional, with its symmetry and simplicity. The watch is powered by a La Joux-Perret movement, in this case better-suited to the watch diameter and the sapphire caseback. The bracelet is the most contemporary part of the watch with a pleasingly angular design. $6,750 for the stainless steel version shown below: 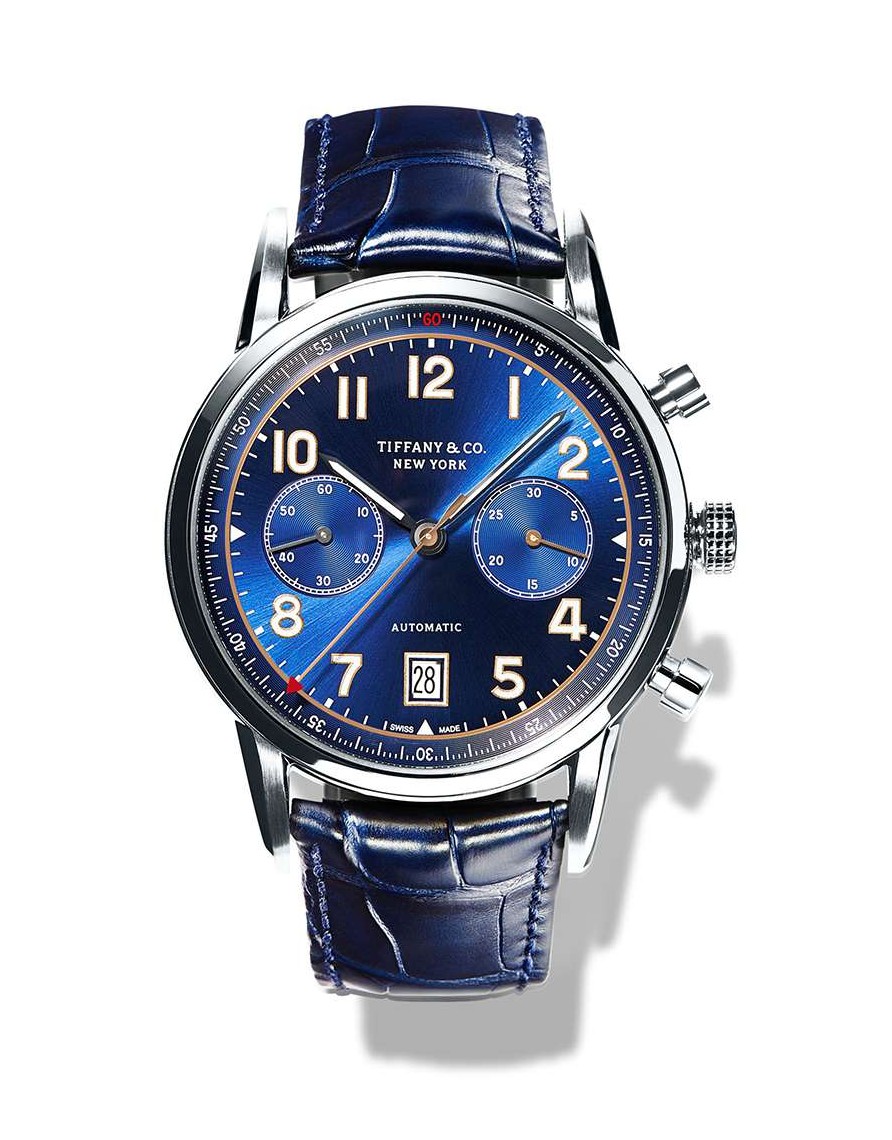 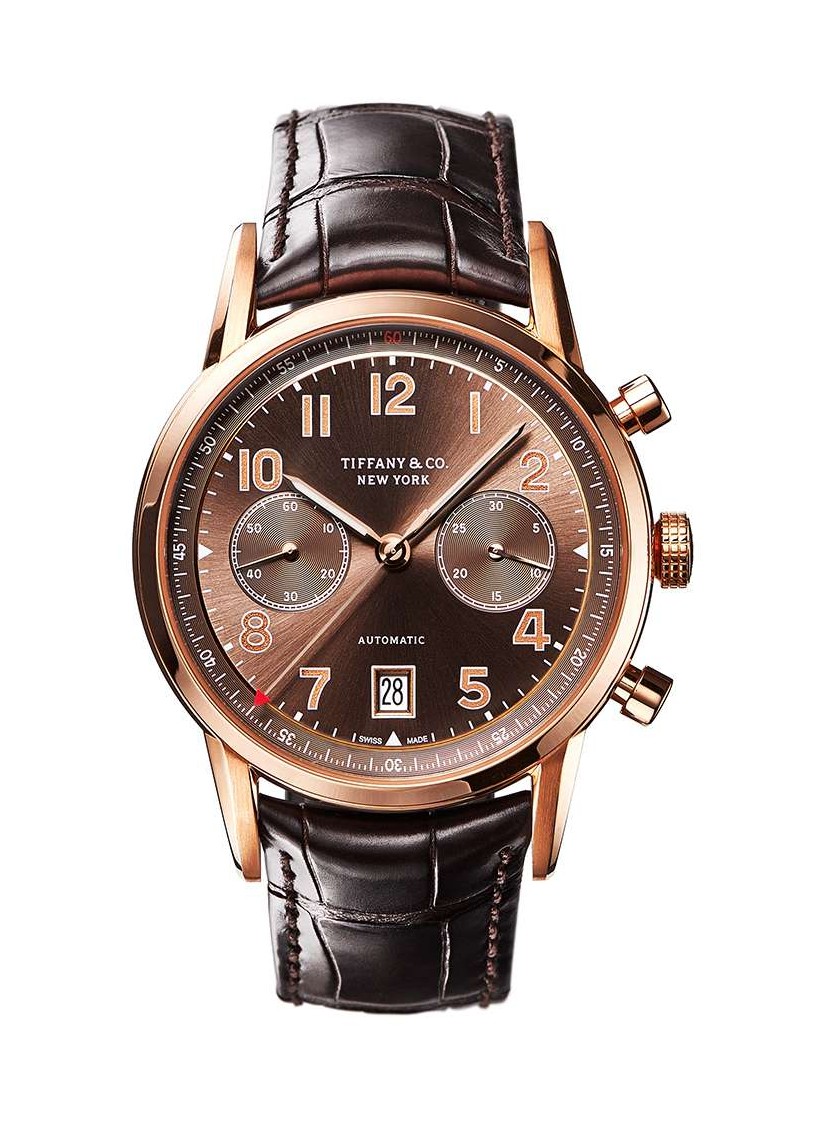 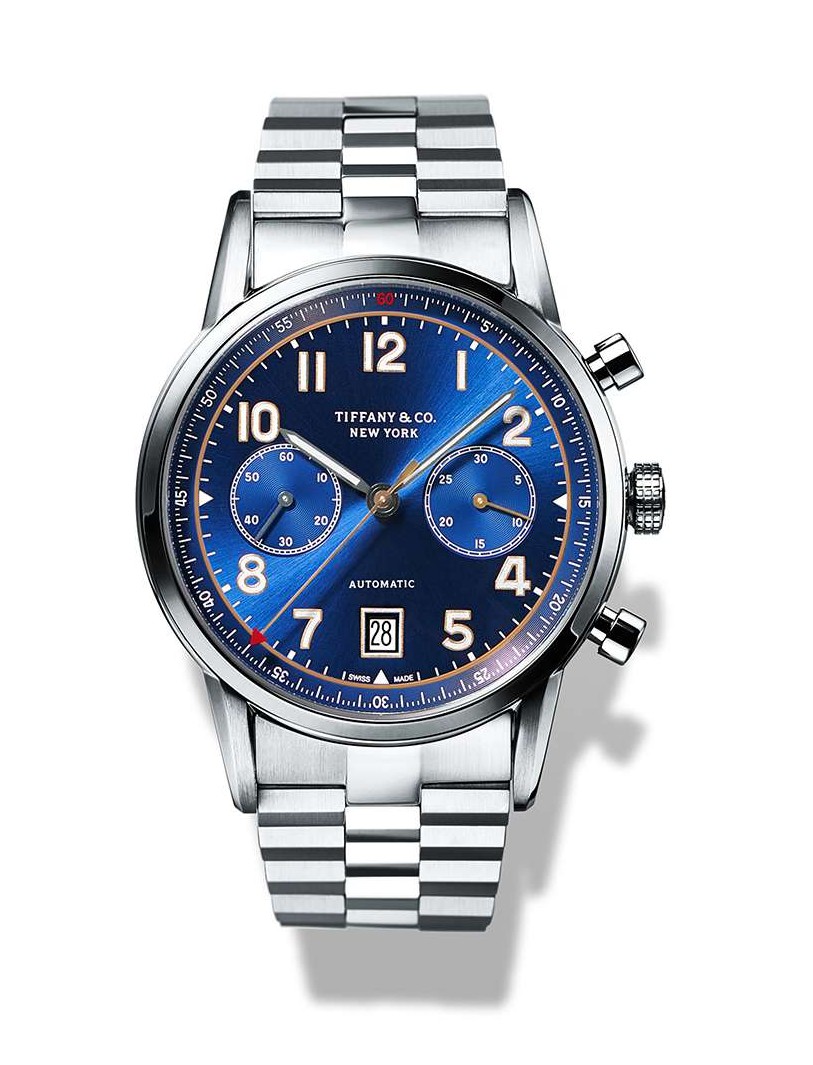 The three-hander is the entry-level watch in the CT60 collection. It is powered by a Sellita movement. The 40 mm version in stainless steel costs $4,750: 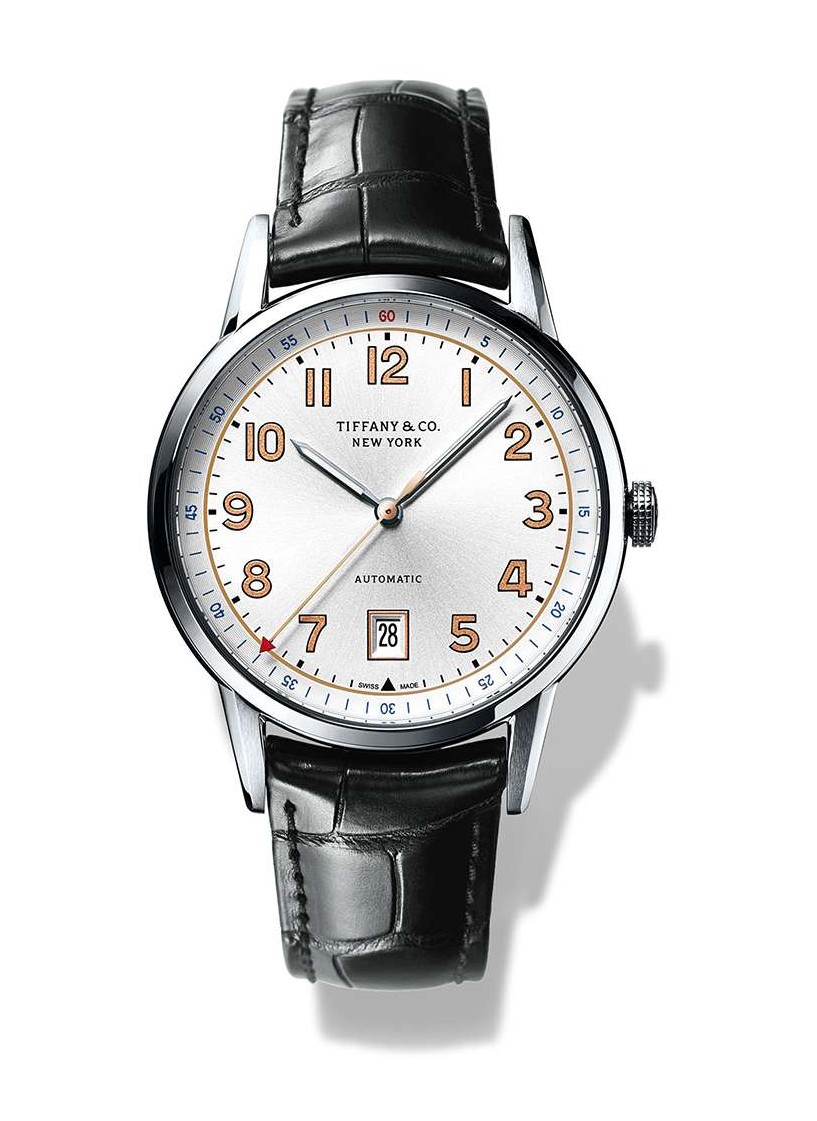 The CT60 watches are also made in smaller versions for women, with or without diamonds on the bezel. The CT60 Three Hander, diameter 34 mm, in stainless steel, is the entry-level piece in the collection at $4,250: 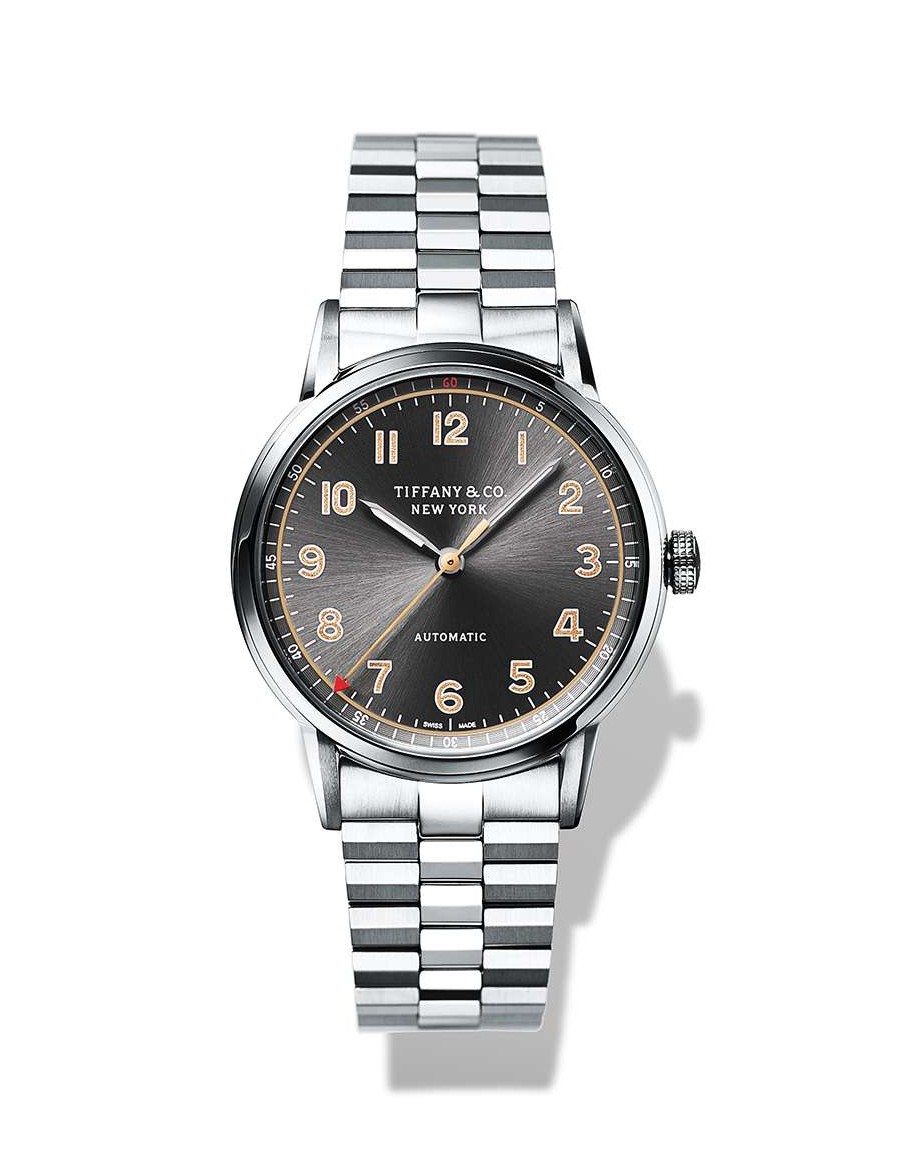 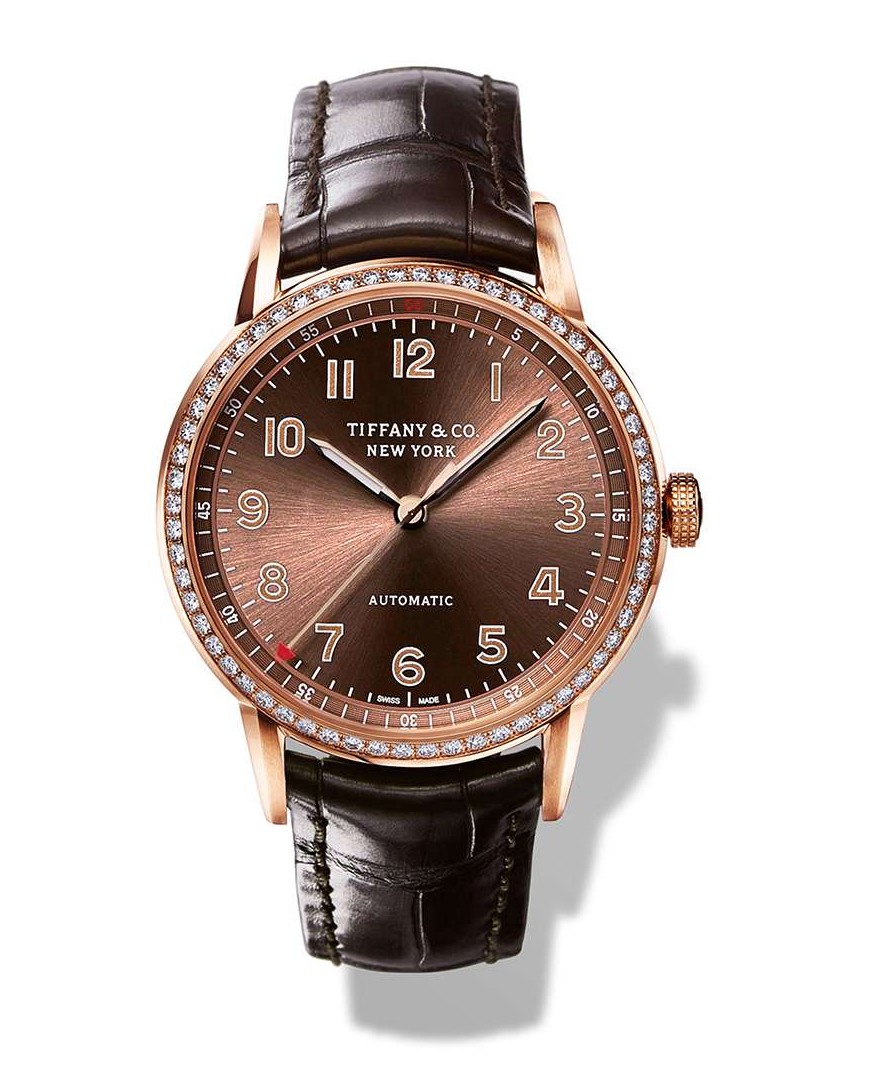 By far the most original design in the new collection is the East-West, a watch that is at 90 degrees with respect to the new layout. It’s a logical arrangement, considering the amount of time we spend with our arms out in front – at desks typing on a keyboard, or with hands on a steering wheel. These models have a quartz movement. The version below in steel costs $3,500: 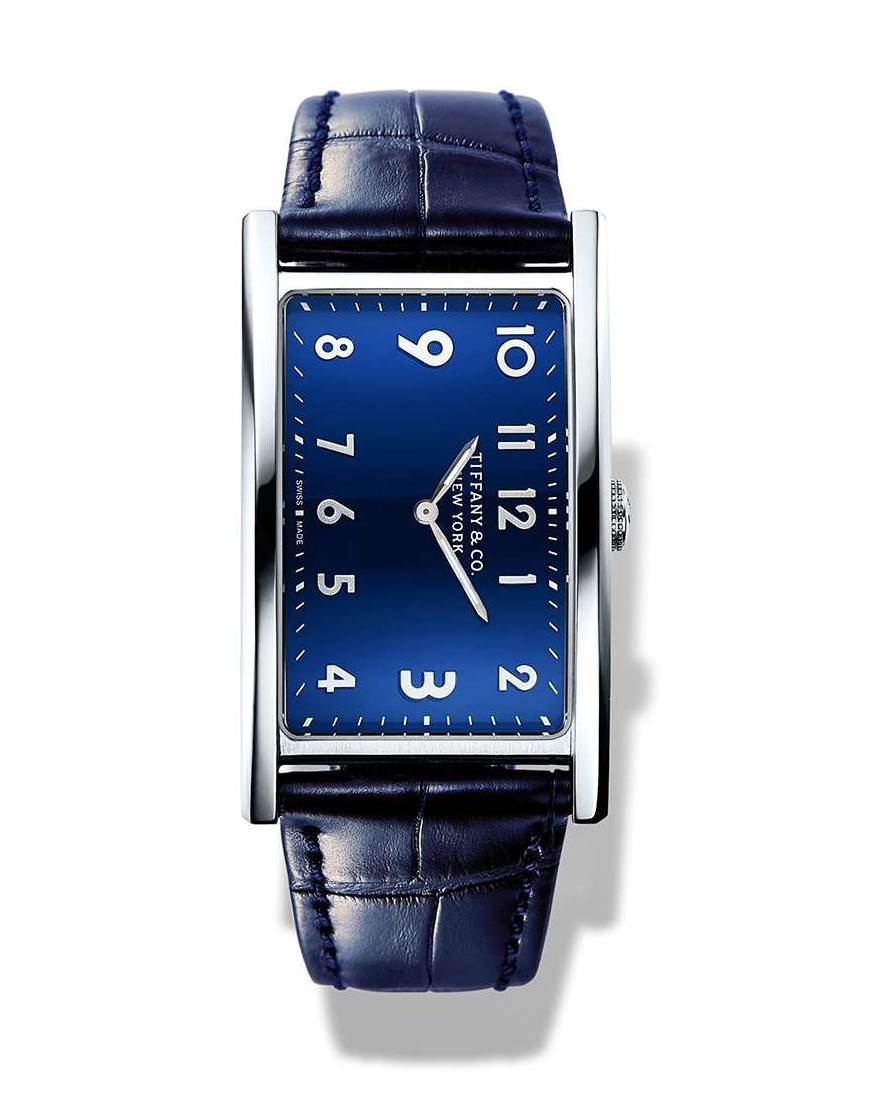