Nord Zeitmaschine is the company owned by independent watchmaker Daniel Nebel. It’s a small company, the smallest possible: Daniel Nebel (born in 1971)works on his own at his base in Büsserach, near Basel in northern Switzerland (hence the name; “Nord” also incorporates his initials DN), making everything except for watchglasses and the base movements. He makes and sells about 30 watches per year, and they look very different with respect to normal watches because the minute hand takes a tortuous route around the dial, in a system based on eccentrics. The image below shows Daniel’s double-eccentric minute hand. 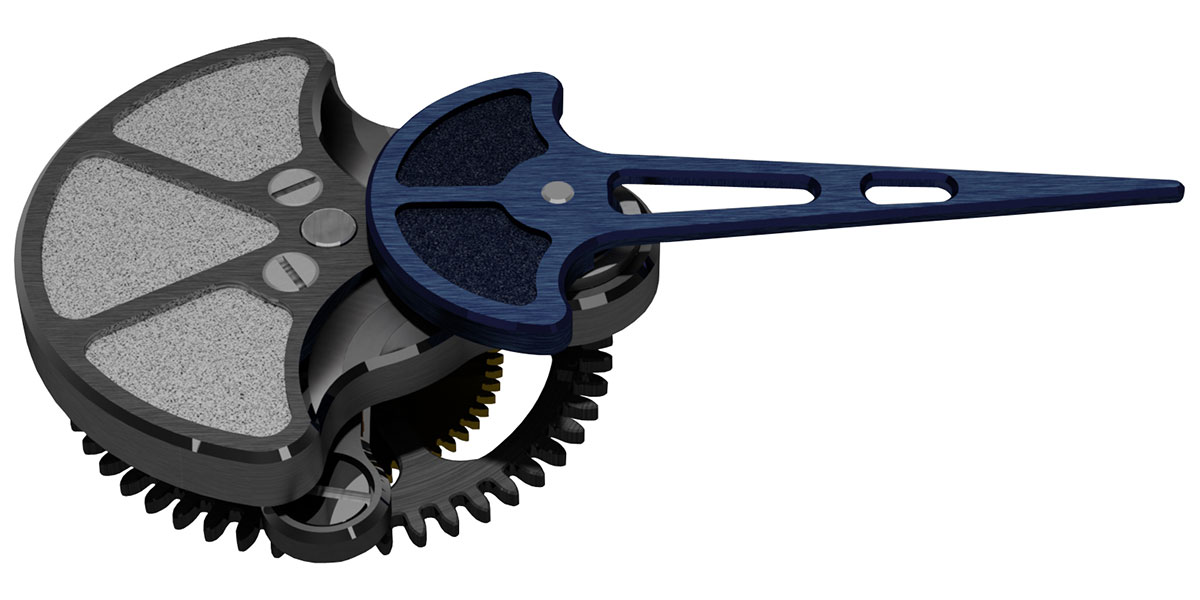 Sector where minute hand is moving slowest, with minute track revolving in the opposite direction to improve resolution

Automatic movement based on ETA 2824, with variations and additional module by Daniel Nebel, power reserve 42 hours

Nord Zeitmaschine Variocurve, made in a series of limited editions, each 97 pieces, price from CHF 14,000 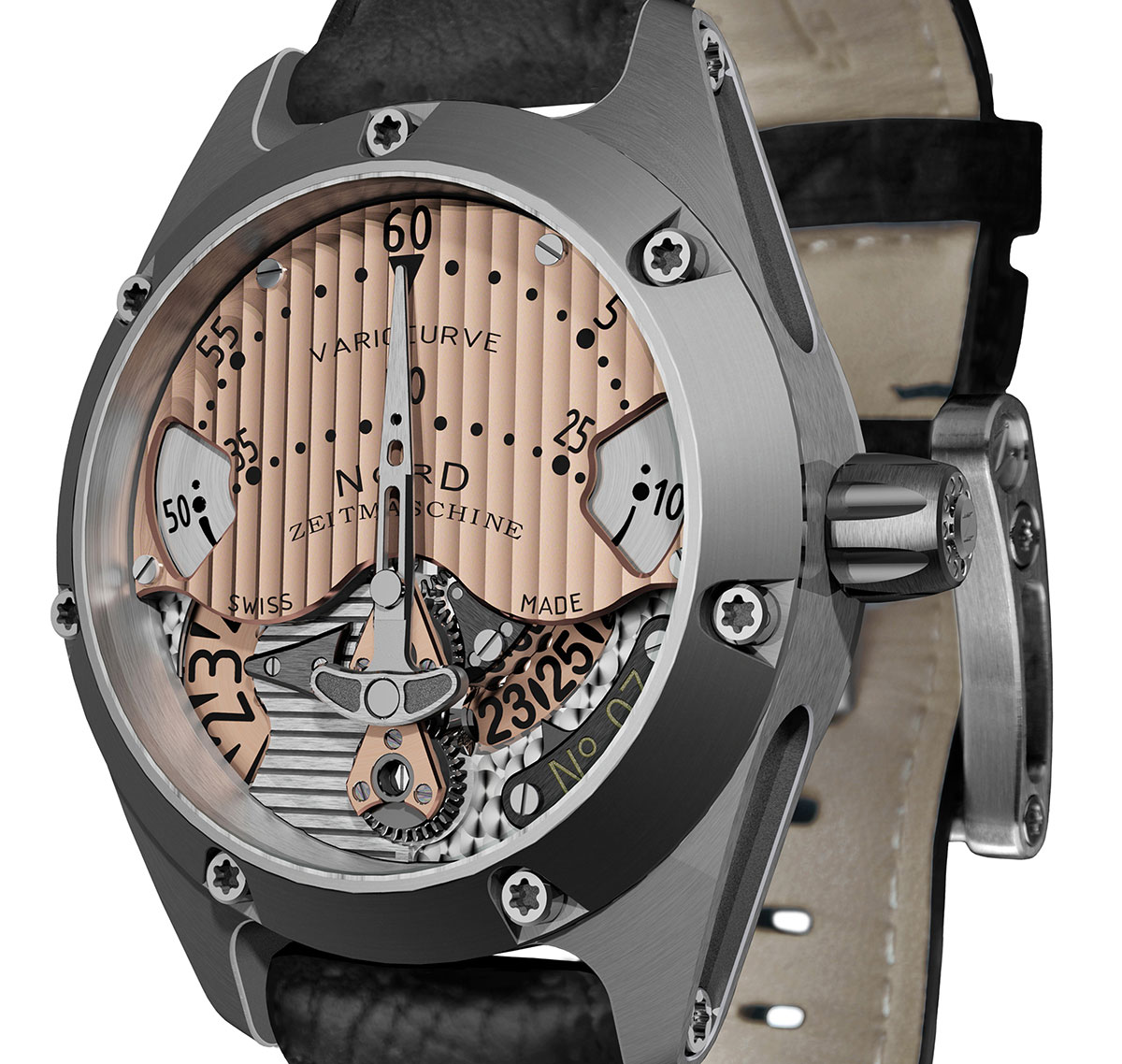 Nebel’s basic concept for the Variocurve is to make the course of the minute hand more interesting by placing its pivot at the edge of a wheel (eccentric) and then placing the pivot of that wheel at the edge of another revolving in the opposite direction. These two opposing eccentrics generate a kidney-shaped track at the tip of the minute hand, whose speed varies along the path. It moves quickest in the central, flatter section, and slowest at the edges, where the radius of curvature is smallest (corresponding to section around 15 minutes before and after the hour). To improve the legibility of the time in minutes in those sections, Daniel devised two display segments that rotate in a direction opposite to that of the hand. It sounds complicated, but in actual fact it’s easy to read and very attractive. Hours and date are shown digitally on the lower section of the dial. The watch is based on the ETA 2824 movement; the case is 43.6 mm in diameter, 15.8 mm thick. with sapphire watchglass and caseback. The case is distinctive with its sloping bezel and the seven sink-head hex screws attaching it to the caseband. Daniel also makes his own personalized 360° rotor, visible through the caseback; the watch has a power reserve of 42 hours.

The price of Variocurve starts from CHF 14,000. It is made in a series of limited editions, each 97 pieces. 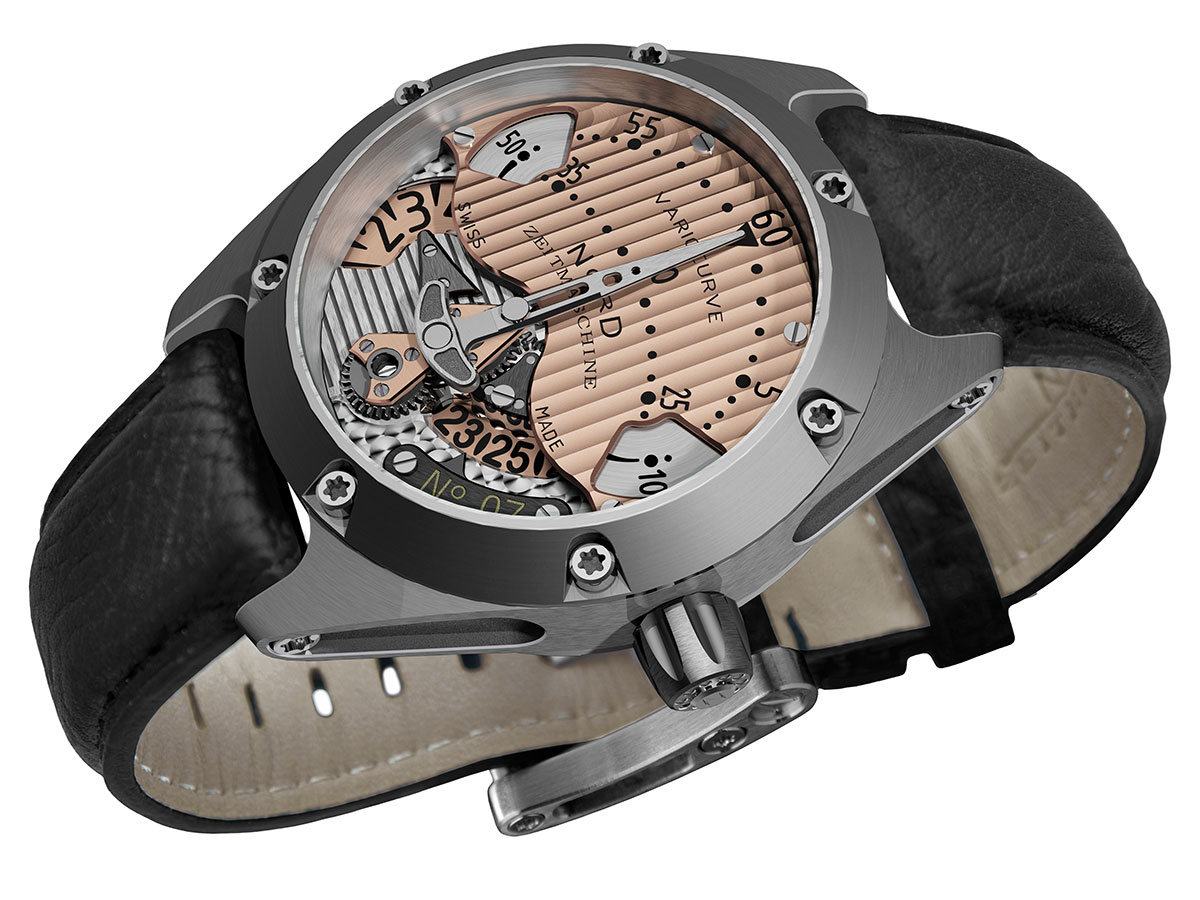 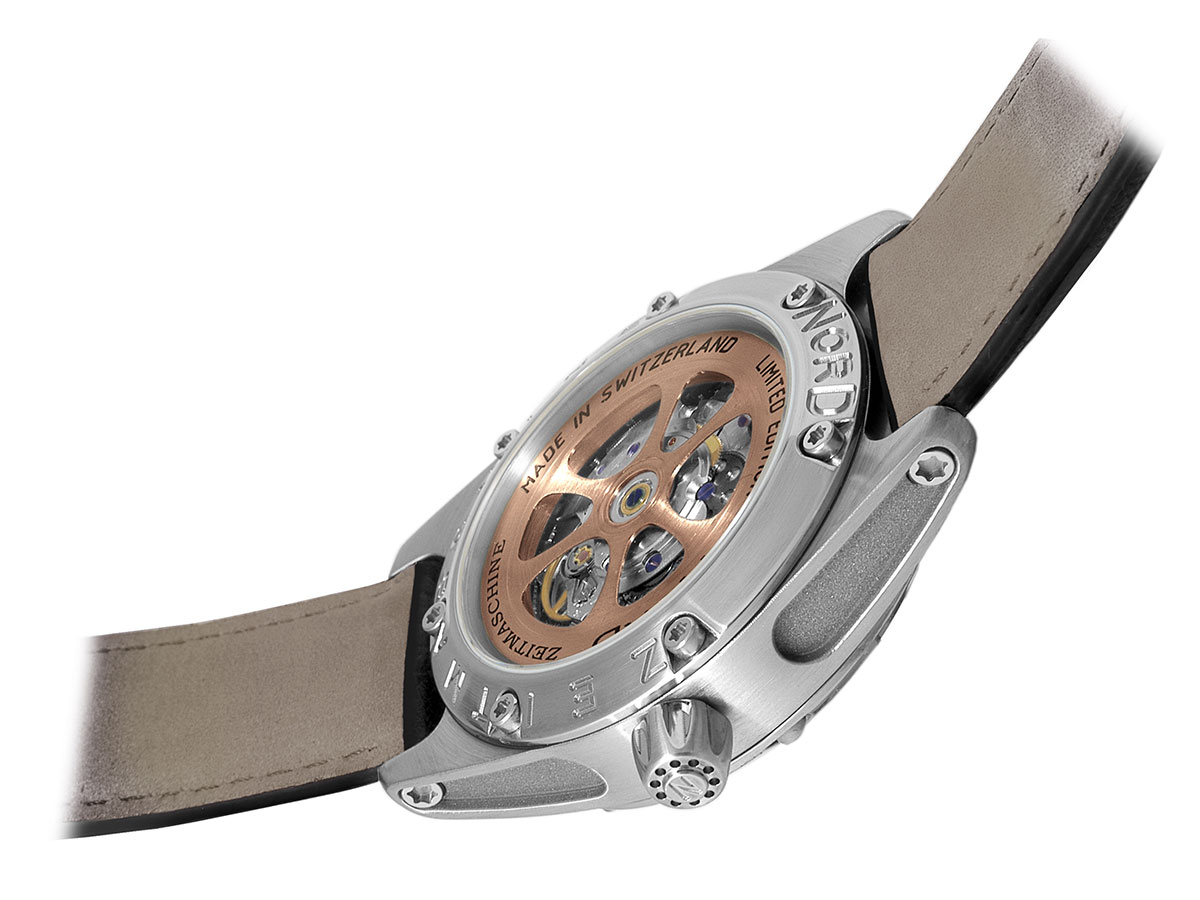 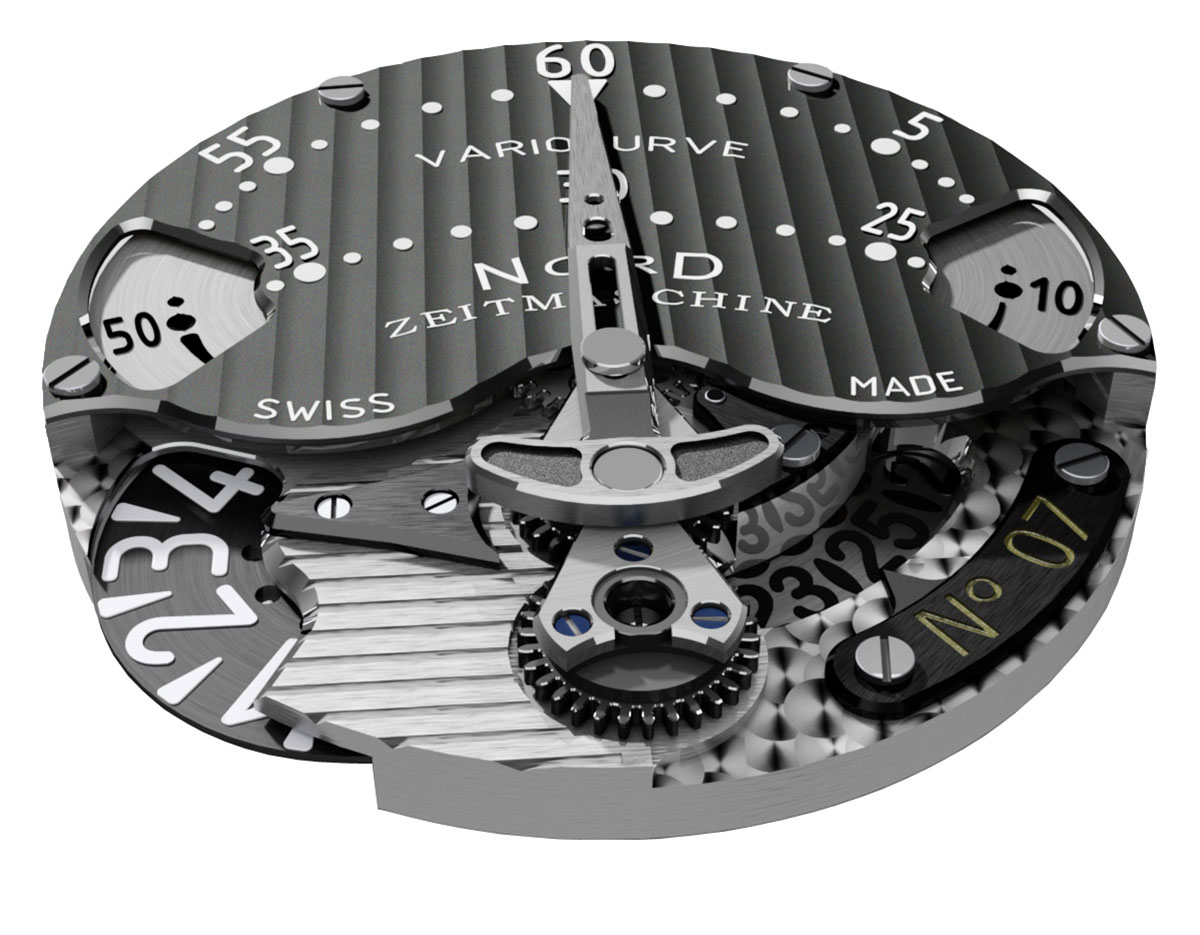 Crossing-place, time in minutes distinguished by track colour and direction of minute hand 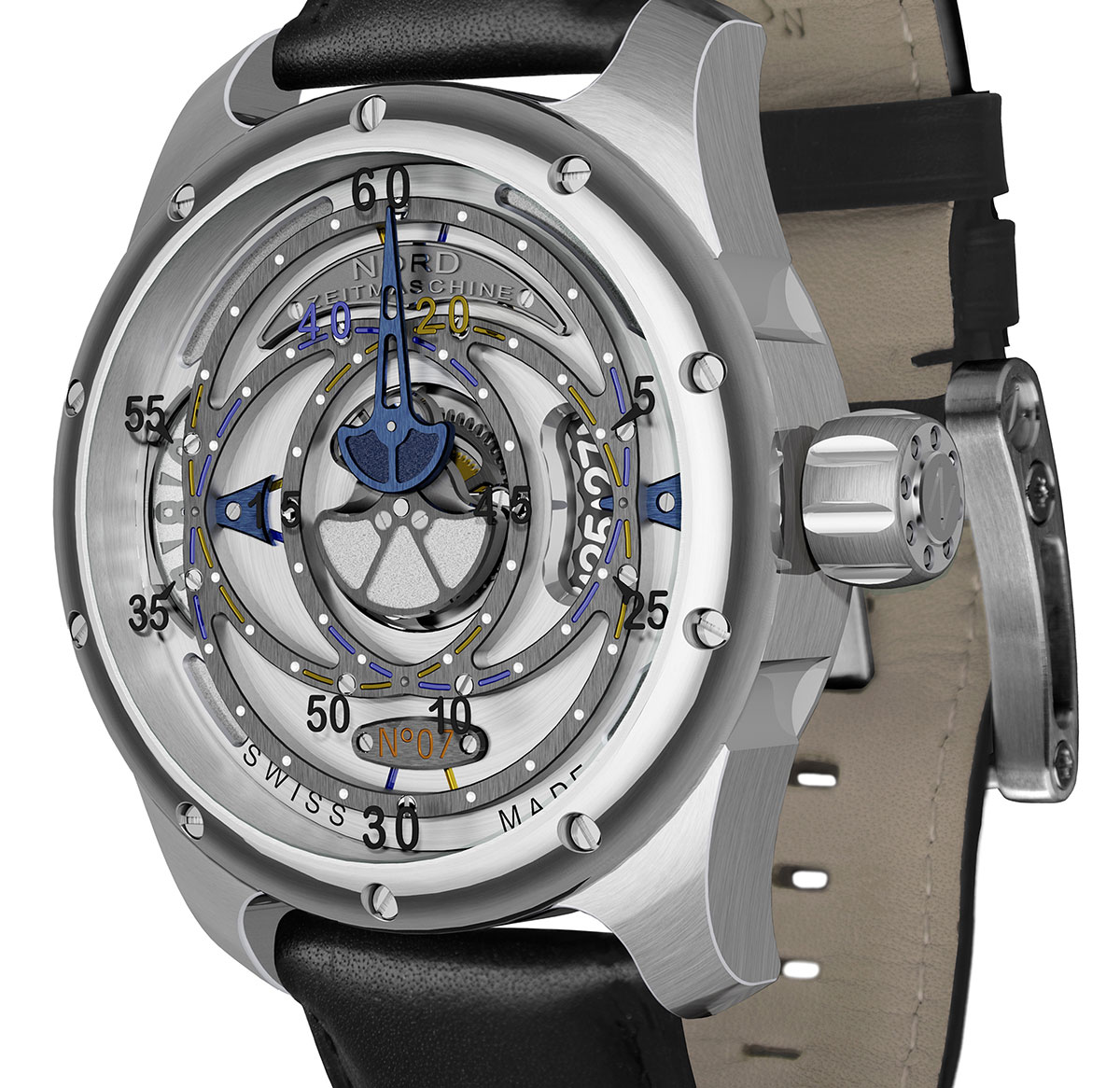 The Quickindicator has the same double-eccentric minute hand, but unlike the Variocurve, it makes three complete circuits of the dial in one hour, starting from the top at 60 and then moving inwards. It’s as if time were running along a Formula 1 racetrack. The scene on the dial is enlivened by the very three-dimensional construction and the attached numbers that almost seem to be floating in space. The track is marked with dots at one-minute intervals. Any doubts that may arise when the minute hand is at a crossing-place – the track crosses eight times in an hour – are resolved by the direction in which the minute hand is pointing, with colour codes on the different tracks at these points. But I would guess that pretty soon you get used to this novel display and it becomes second nature. It’s an interesting way of stretching out the chapter ring: instead of the approximate 12 cm of a normal watch, in this piece the total length of the minutes scale is just over 20 cm. So it could be good for a chronograph, perhaps we will see that some time in the future? Hours and dates are shown on two digital displays on each side of the dial. 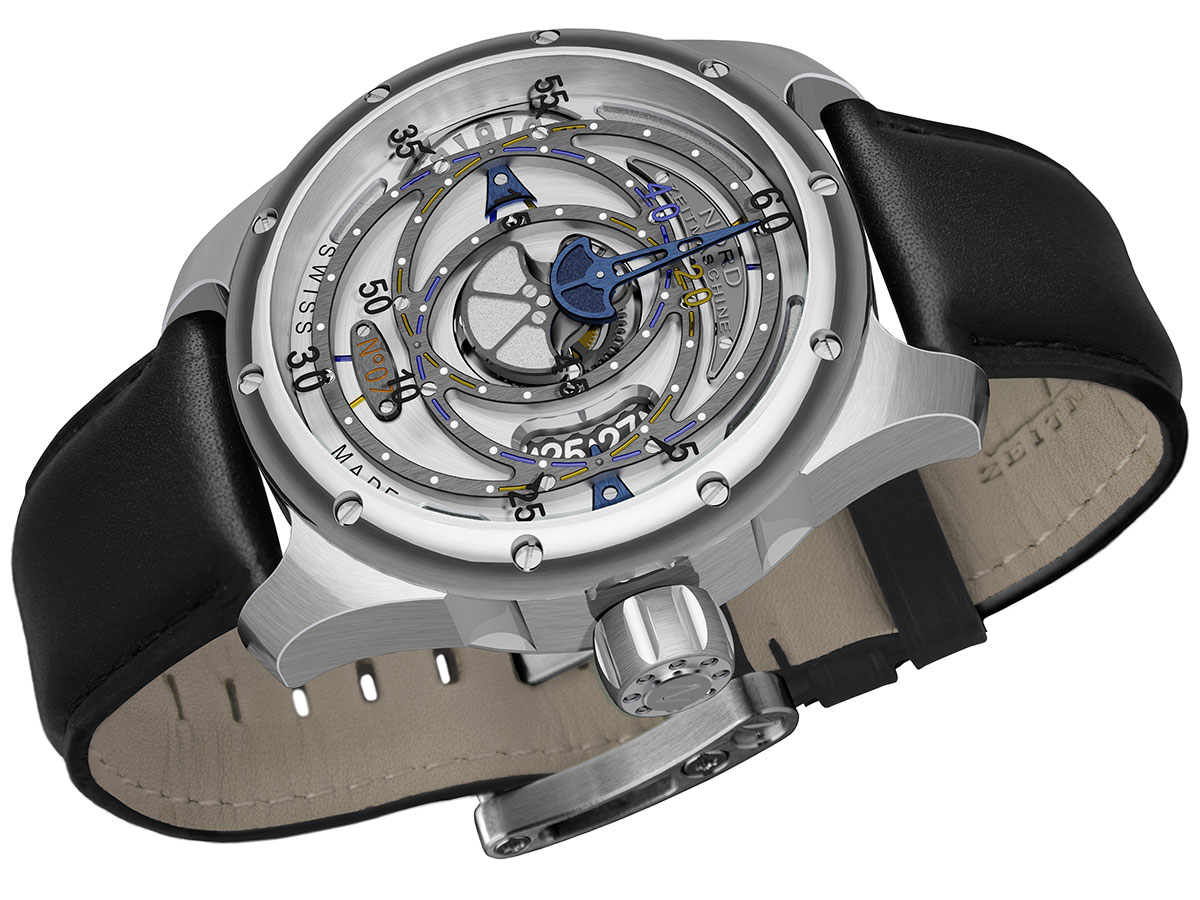 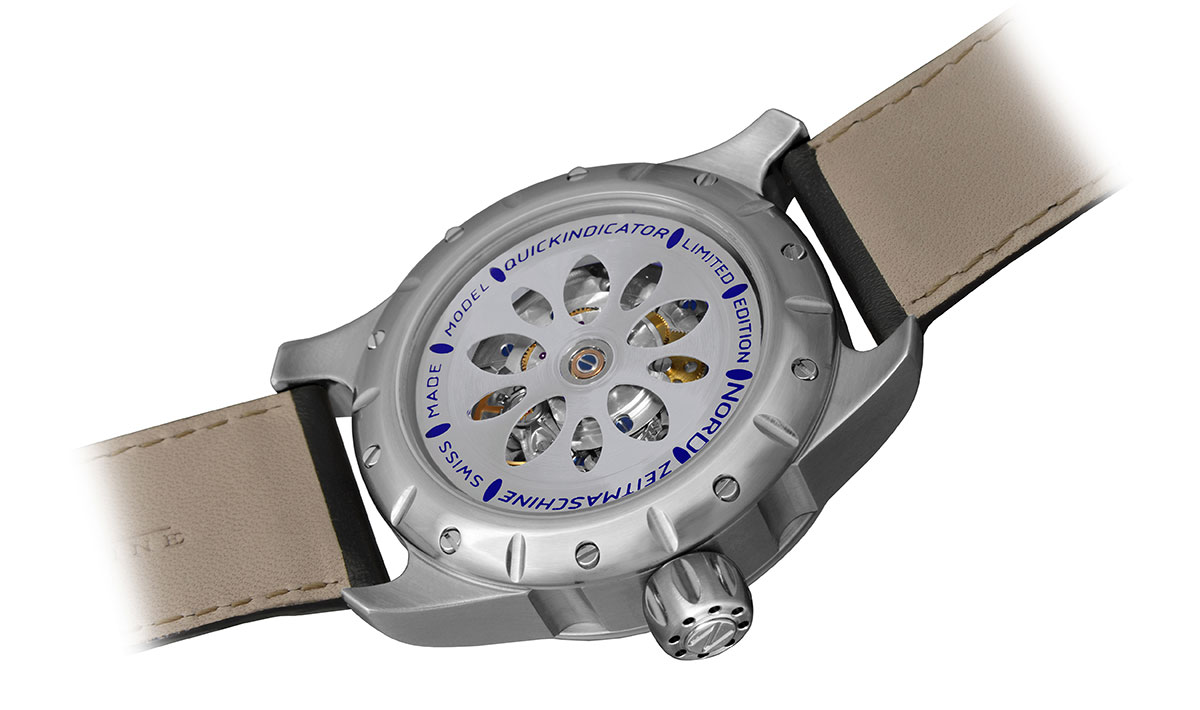 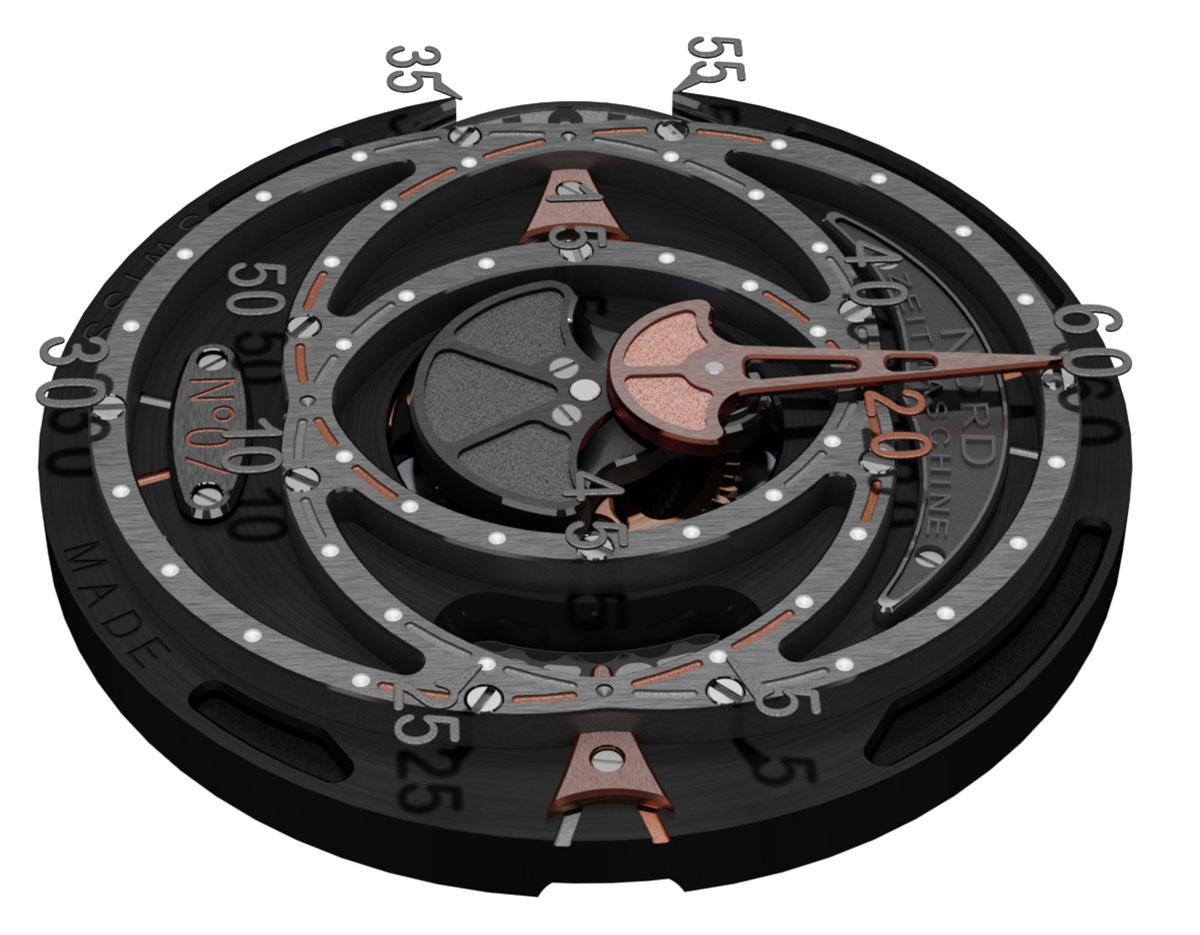