In 1895, Alfred Van Cleef, son of a gemstone-cutter, met Estelle Arpels, daughter of a gemstone dealer. And the consequence was the birth of a business, Van Cleef & Arpels, run initially by Alfred Van Cleef and his father-in-law Salomon Arpels. In 1906, after Salomon’s death, Alfred was joined by Estelle’s brother Charles Arpels, who ran the new boutique in Place Vendôme, Paris. In 1908, another of Estelle’s brothers, Julien, joined the company, and in 1912, Louis Arpels. The jewellery maison began making jewellery watches in the 1920s, and in 1935 created a model inspired by or possibly even directly suggested by the Duke or Duchess of Windsor, the Cadenas watch, relaunched in 2015. Pierre Arpels joined the company in about 1945, and in 1949 designed a dress watch which was initially for his use only and a few other people in his own social sphere. The Pierre Arpels dress watch was only launched on the market in 1967, and it has been part of the collection ever since.

The company was purchased by the Richemont group in 1999.

The first Van Cleef & Arpels “Poetic Complication” watch was presented in 2006, the Centenaire, and from then on the brand has presented a number of these pieces in which time is shown in an unusual way, such as by the wings of a fairy in Lady Arpels Féerie, or with links to the stars and astronomy. In 2010, the Pont des Amoureux, with its double retrograde movement, won a prize at GPHG.

Van Cleef & Arpels is primarily a jewellery company, but it has its own watchmaking facility as part of the Richemont Group’s Campus Genevois de Haute Horlogerie, that includes Stern Création making dials, and Manufacture Genevoise de Haute Horlogerie making movement parts. The Campus is located in Meyrin, near Geneva, and according to plans it will reach a population of 900 employees by 2020. Previously, Van Cleef & Arpels often had movements made by other companies: the Pierre Arpels watches often have Piaget movements. For their Poetic Complications, they work with designers and watchmakers such as Jean-Marc Wiederrecht of independent watchmaking company Agenhor (creator of Poetic Wish, and Pont des Amoureux), and Christiaan van der Klaauw, expert in astronomical watches, designer of Midnight Planétarium. The Ballerine Enchantée was developed with La Fabrique du Temps. 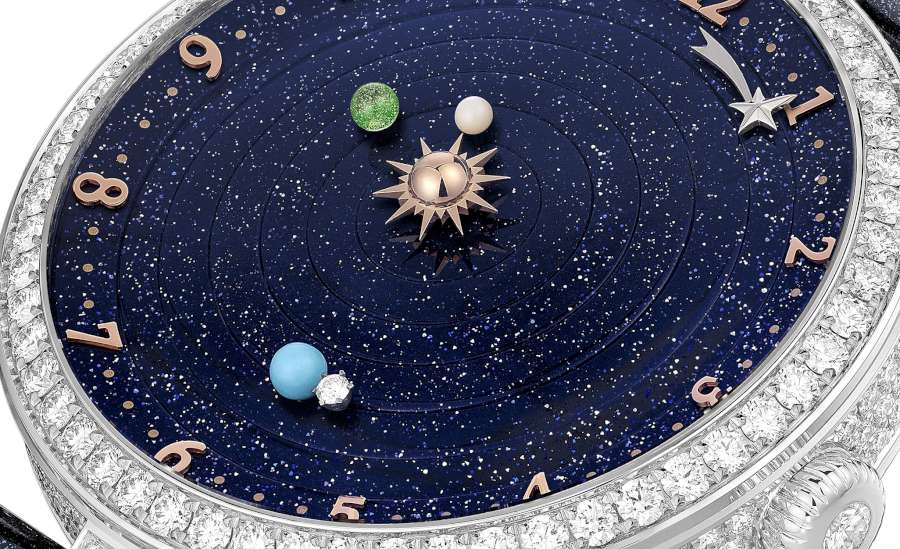