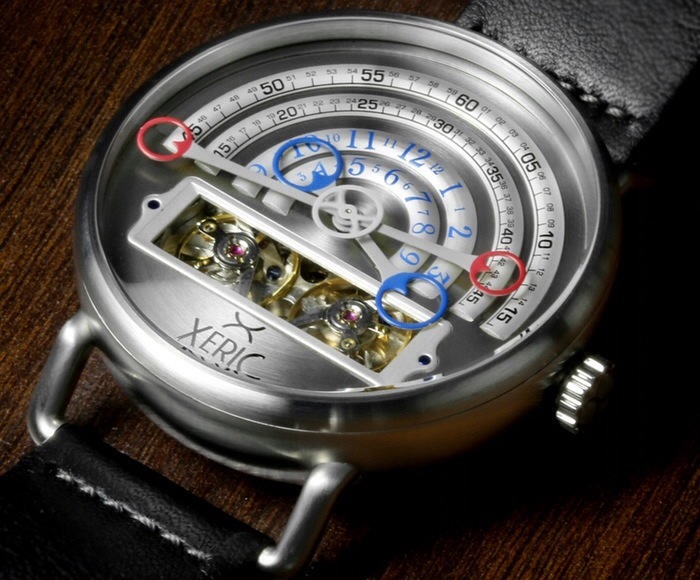 This is a kickstarter project, and by today, with three days still to go it had received 2,035 backers, raising $746,682 pledged with respect to a goal of $50,000. Xeric is a company that has already promoted its watches successfully on Kickstarter (the Xeriscope, 2013), but the success of the Halograph invites a bit of reflection.

At $369, it’s a cheap mechanical watch. The Halograph is unusual to look at, with both minute and hour hand that are double-ended so that each runs alternately on two scales. A rectangular window at the bottom of the dial reveals a double balance wheel. So it’s an unusual piece, a talking-point. But where traditional watch companies should take note is the style of communication. “The Halograph Automatic is a living time machine. YOU are the power source. It lives on mechanical energy. It’s not an electronic gadget: it’s a mechanical heirloom… A smartwatch starts to die as soon as its circuitry is activated, and its functional obsolescence starts as soon as it’s off the assembly line. A mechanical watch will never be obsolete. It will always connect you in a meaningful way with this moment in time. ” So it’s exploiting all the current talk about electronic smartwatches and contrasting that with its own identity as an automatic mechanical watch, “Don’t we find ourselves instinctively drawn to the kinetic nature of a mechanical watch? Its gears transfer force upon one another, interacting with the natural conditions of our universe, just like our muscles and bones. It ticks with a beating heart, just like us… It doesn’t require batteries or updates to do its work while summoning compliments and sparking conversation everywhere you go.”

So we ask, what’s new? It’s just an automatic watch. What’s new is the way they present it. The copywriting is very good. It transmits the authentic dream of the mechanical watch, something that watch lovers and most watch brands take for granted, but that should probably highlighted for every new watch, particularly those presented at the lower end of the market. “The Halograph Automatic is powered by your daily life, storing up to 36 hours of energy from a simple flick of your wrist. A beating mechanical heart pumps life through this complex machine. You can view the rotor generating the power supply for its mechanical movement through a crystal porthole on the back of the case.”

Xeric is a company based in California. The Halograph is powered by the S-01 movement by Chinese company PTS (founded 1991), whose head office is in Hong Kong, with movements actually made in mainland China. PTS describe it as a “dual imitate tourbillon,” a movement with two balance wheels, running at 21,600 vph, power reserve about 36 hours. Accuracy is +/-45 seconds/day. So you couldn’t describe it as a high-quality piece. It’s not Swiss made, not even American made. What it has is unusual design, and above all, exceptionally good copywriting. They’ve identified their market and talk directly to them in exactly the right way. And this is where a lot of the established watch brands still have some work to do.