Rotating bezel, can be used to indicate dive time, or for a second time zone 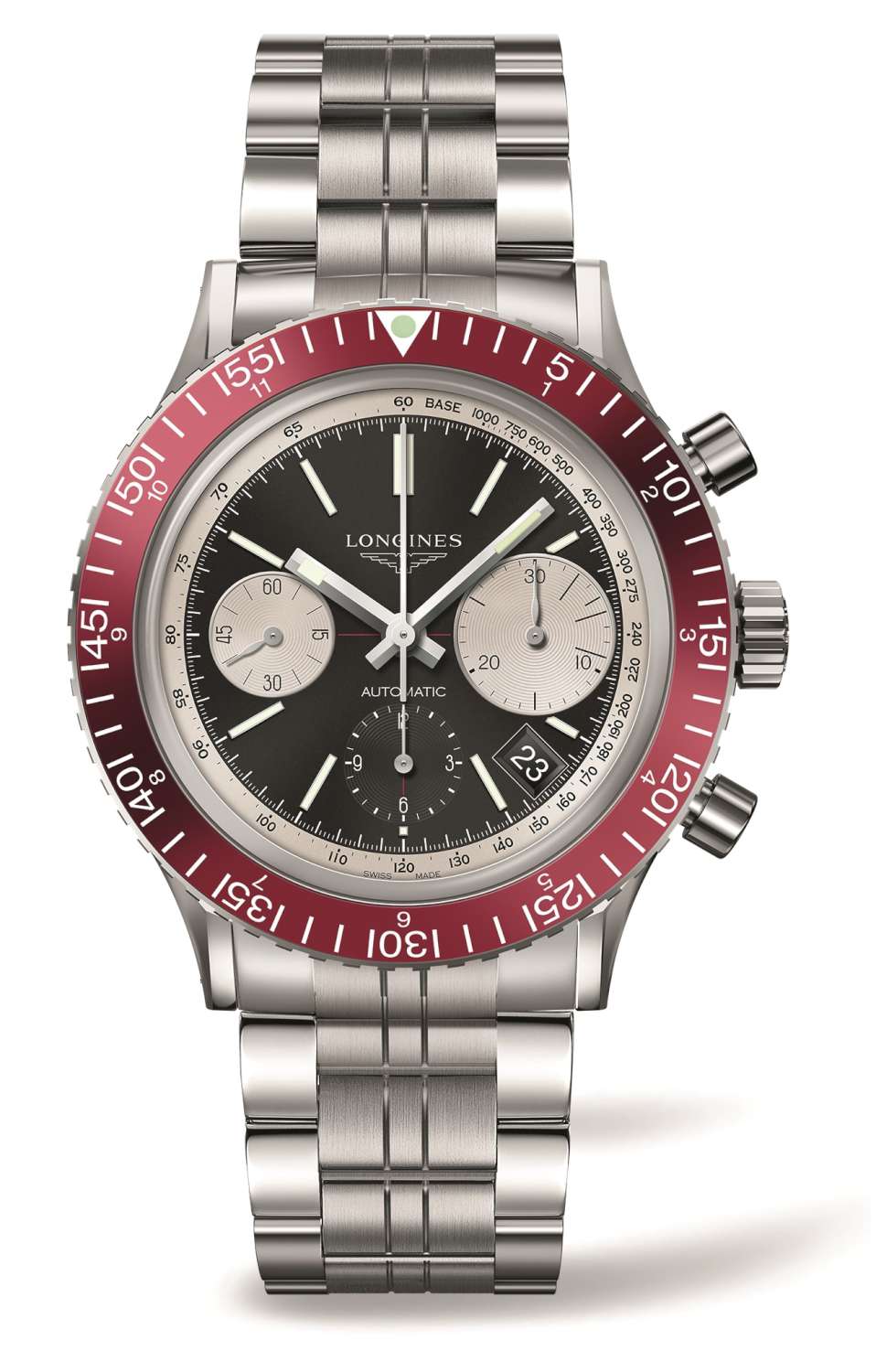 This is almost a diving watch, in the sense that it offers nearly all the features required by ISO 6425, but not quite all of them. For example, an ISO 6425 diver’s watch requires that the hour and minute hands be distinctly different, and in this watch, they are pretty much the same except for length. Likewise, an ISO-conformant diver’s watch should provide an indication visible in the dark that the watch is running, usually by means of a luminous second hand, but in this case the continuous second hand is on a subdial at 9 o’clock, because the watch is a chronograph.

But no-one is going to worry about this, because the Longines Heritage Diver 1967 is a new edition of a 1967 piece, with the same quirky elements that led to its popularity then. It acquired the nickname “lazy eye” because of the two silvered subdials of different size standing out from the black opaline dial background. It has a chronograph, which could be a practical way of recording the length of a dive so that it can be logged, and a tachymeter scale on base 1000 which personally I find fairly impractical for divers (do they really need to know how fast they are going by timing how long it takes to go 1000 metres?). Another unusual feature are the longer subdial markings for 3, 6 and 9 minutes on the chronograph minutes subdial. Could they be for boiled eggs? 3 minutes for the boil and cover method, six minutes when the eggs are added to boiling water? Of course not… I’ll find out one day. Another subdial at 6 o’clock provides chronograph hours.

The watch has a date window at 4.30, which is the logical place to put it given the arrangement of the subdials. To my mind it would have looked much better without it, but that’s just my personal preference, and as this is a watch that captures the period look to perfection and, like most diver’s watches today, will be used more as an everyday watch rather than an underwater tool, a date window can be useful in normal life. As far as I can see, the original didn’t have a date window, and neither the hour subcounter at 6 o’clock.

The diver’s watch aesthetic is provided principally by the Bordeaux-coloured aluminium rotating bezel which makes it possible to time a dive. It is also a useful system of using the watch to indicate the time in a second time zone. The solid caseback has an engraving of a scuba diver. The 42-mm case is water resistant to a depth of 300 metres. You can choose from a steel bracelet with diving extension, black leather strap or a rubber strap.

Without doubt one of the most attractive features of the watch is its price point of €2,600, offering the looks of watches costing much more.

The watch is powered by the automatic L688.2 movement, which has a power reserve of 54 hours. The movement is made by ETA, part of Swatch Group (ETA A08.231). It is a column-wheel chronograph.