Spherical turbines that spin with every movement of the winding rotor on the other side of the movement. Each turbine comprises 15 aluminium vanes machined from a solid block 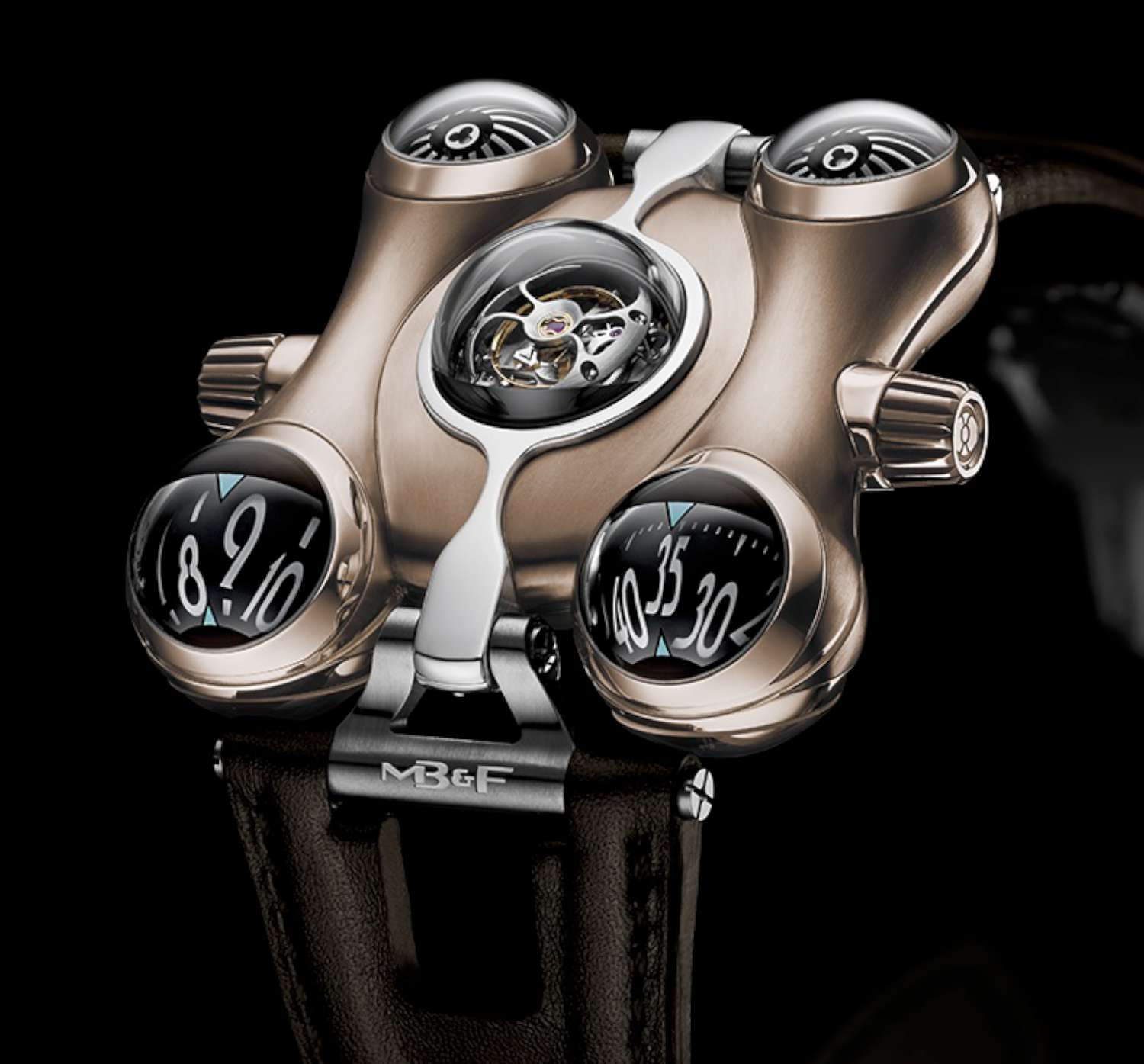 The original titanium version of the HM6 Space Pirate by MB&F recently won a “Best of the Best” award at the Red Dot design competition in Essen, Germany. The jury said “The distinctive shape of the clockwork simply fascinates, and its mechanism mesmerises. Featuring the appearance of a friendly being from another world, this wristwatch seems to tell its own tale…” It’s like a space station on the wrist. The prize arrives in MB&F’s 10th anniversary year.

MB&F have also introduced a new gold limited edition of the HM6, called the HM6 RT. The 18 pieces of the red gold version accompany the 50 HM6 Space Pirate watches in titanium; other versions yet to come will bring the HM6 range to its announced total of 100 watches. The red gold used is a special alloy with small amounts of copper and palladium added (similar to Rolex’s Everose and Omega’s Sedna). The palladium fixes the copper and so preserves the reddish tinge over time, preventing the tendency to become slightly orange that occurs with the normal 75% gold, 25% copper alloy. 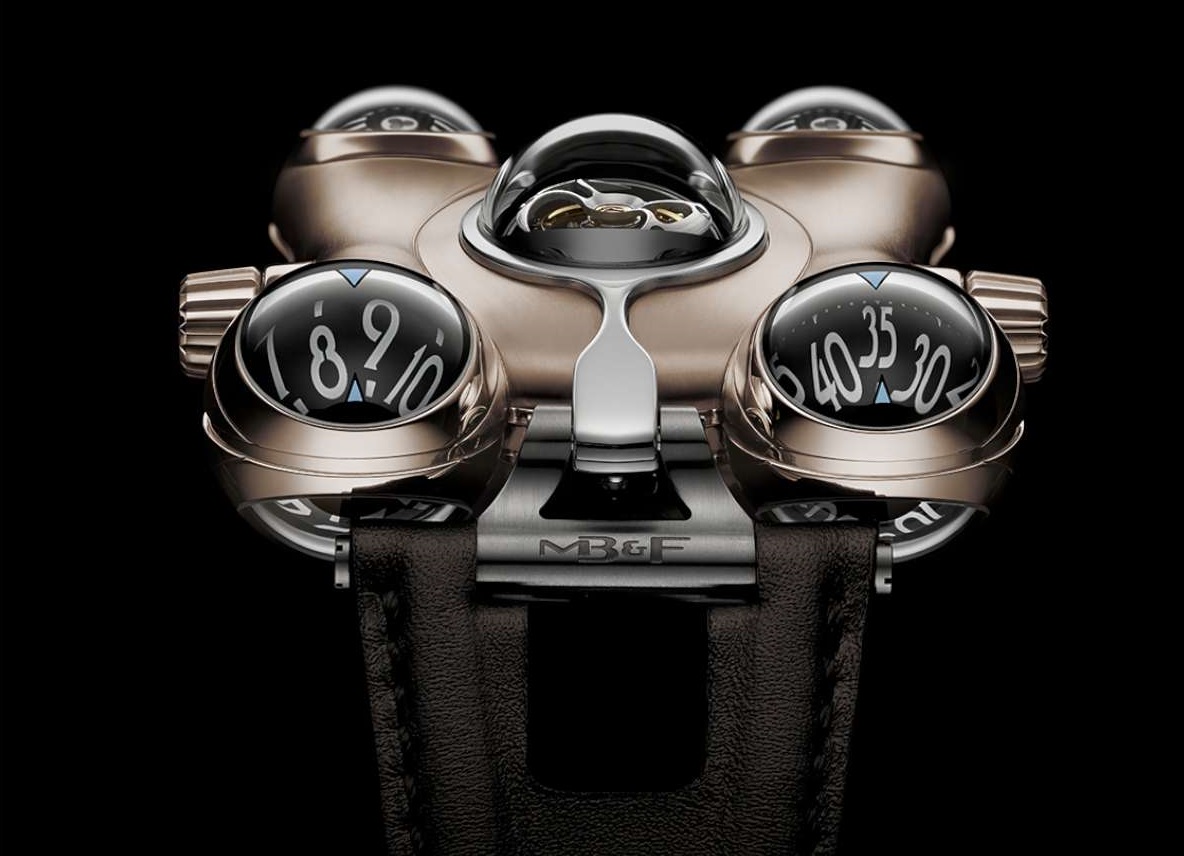 At the centre of the watch is a flying tourbillon, with a retractable shield that helps protect the lubricant oil, increasing time between maintenance operations. The shield is operated using the crown on the left-hand side of the case. In the two front domes, two semi-spherical indicators rotate vertically, displaying hours and minutes. On the other side of the watch, two spherical turbines spin, linked to the movement of the rotor on the other side of the movement, winding the watch. This is primarily a piece of scenic design, so that that watch always has something moving to see, but the turbines do slow down the rate of swing of the rotor, reducing wear. 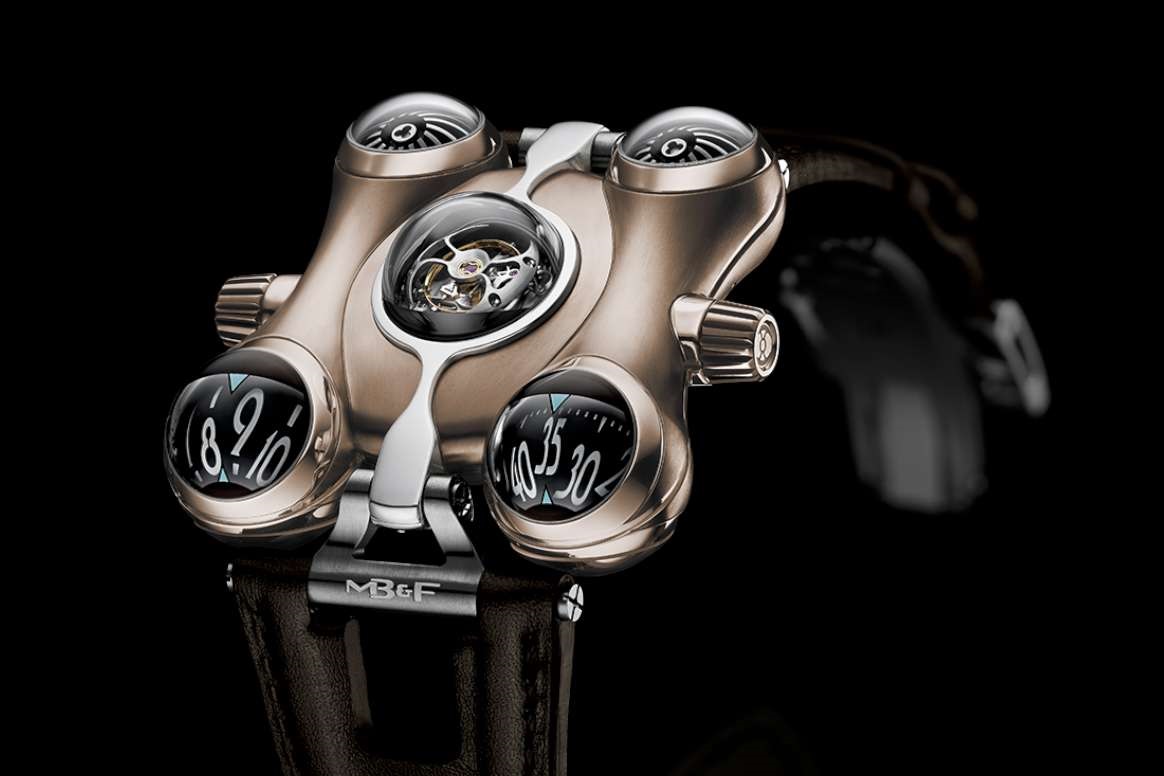 The case is machined from solid gold, with upper and lower sections joined by a titanium band linked to the pivoted lugs. This system helps highlight the organic forms of the watch, inspired by work of designer Luigi Colani. Both above and below the case, a titanium band runs lengthways, joined to the lugs. The design of case and lugs makes the HM6 comfortable to wear notwithstanding its large size, 49.5 x 52.3 mm, thickness 20.4 mm. Each watch has a total of 10 sapphire domes, all machined from solid blocks of sapphire. Water resistance is 30 metres. The watch is mounted on a calfskin strap with red gold folding buckle. 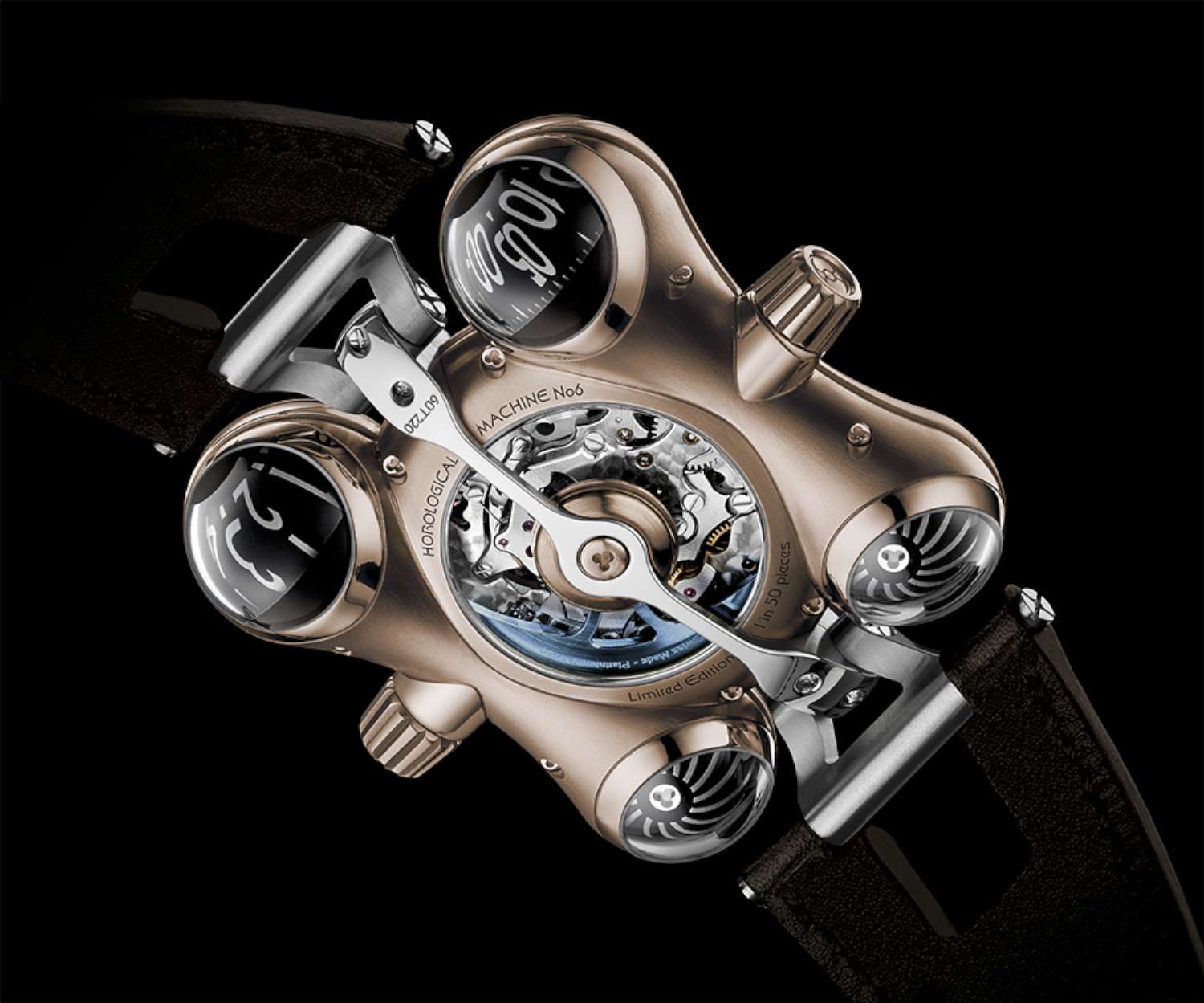 The engine of the HM6, comprising 475 components, was designed by MB&F with David Candaux. The blue winding rotor that can be seen on the back winds the watch, which has a power reserve of 72 hours. The balance runs at 18,000 vph or 2.5 Hertz. 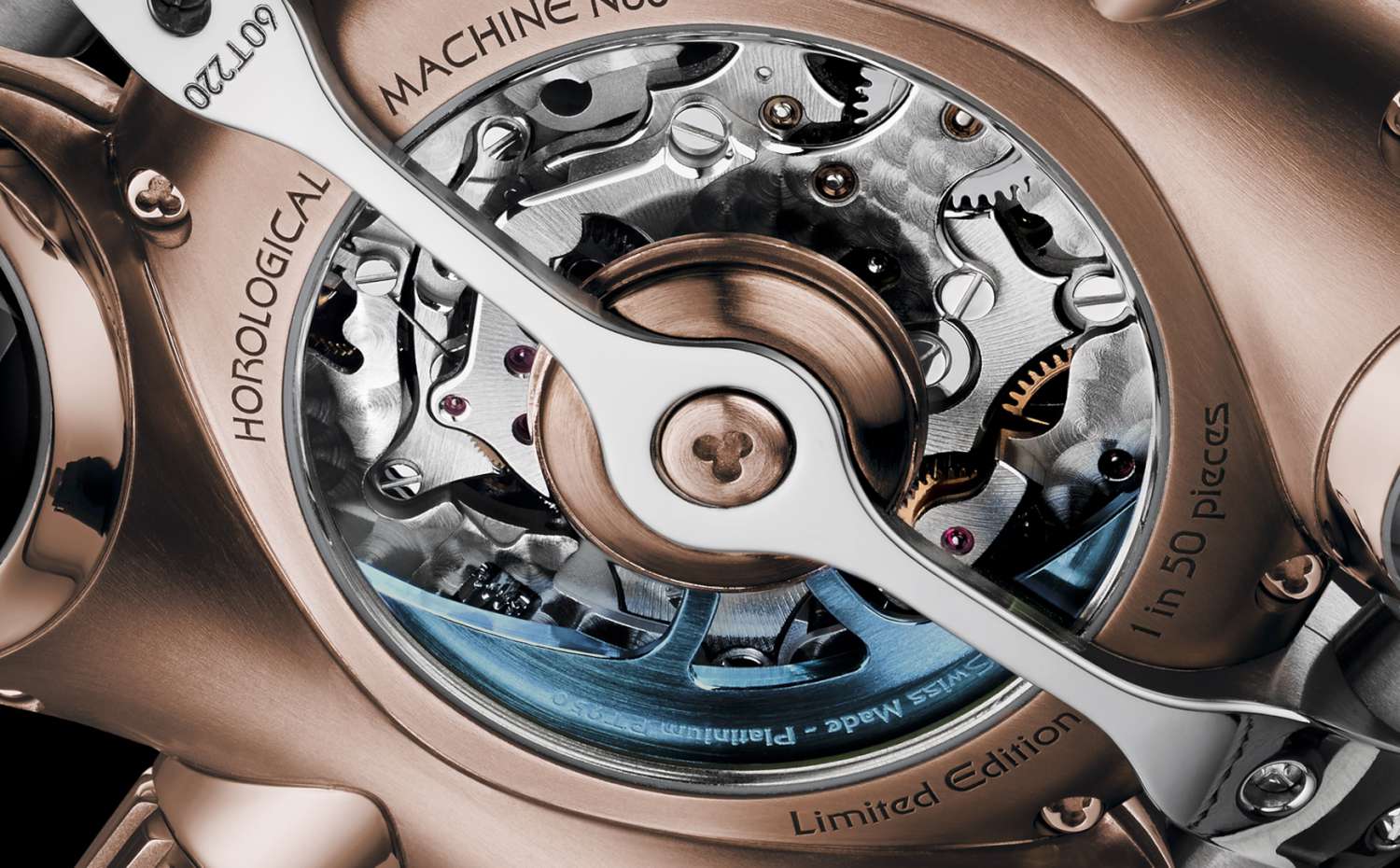 The HM6 RT watch by MB&F is already available (July 2015), with the first pieces delivered to retailers around the world. More pieces will be available in August and September. The price is CHF 220,000 plus taxes. 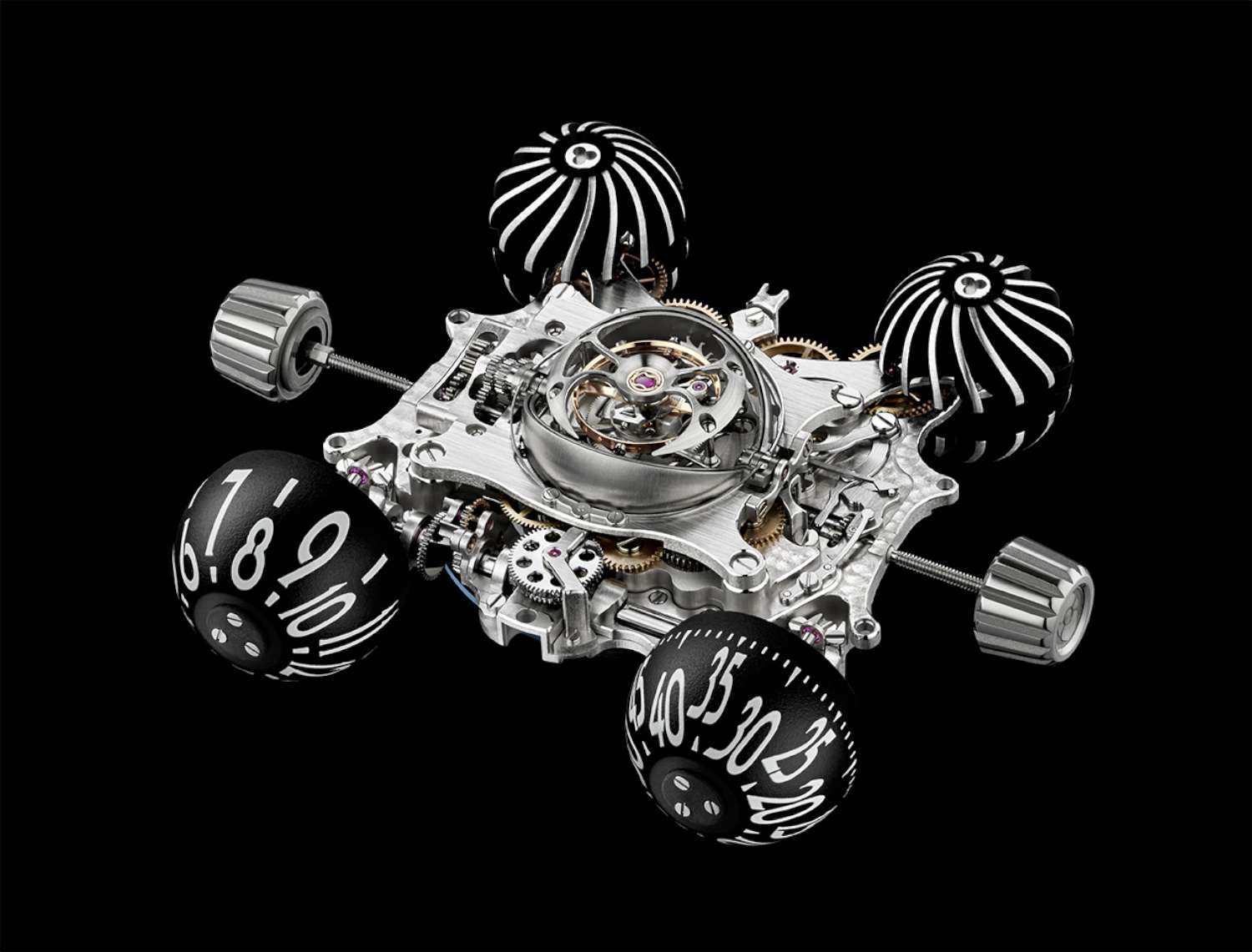