This watch by De Bethune, presented at Baselworld 2015, has a lot of the classic De Bethune features, in part because it is an anniversary piece, marking ten years from their first DBS made for the 2005 Only Watch charity auction. The new DBS Tourbillon retains some of the features of the original, such as the conical lower lugs, the hinged link between the top strap and the case, and the crown at 12 o’clock; the principal addition is the tourbillon. It’s an intriguing piece, and the more you look at it, the more you are drawn in to its tightly-nested series of circles like intersecting planetary orbits, with the blue orbs of the hour markers, the blued steel hands shooting out from the centre like blue comets or supersonic aircraft, and the glimpse of wheels deep down behind the skeletonized dial and deltoid-shaped movement bridges. The watch is a perfect illustration of what happens when watchmakers and designers coordinated by founders Denis Flageollet and David Zanetta are able to work on all components, making everything from scratch. They don’t have to make compromises, they don’t have to work with the limitations that you have if you are simply buying a movement and designing a case around it. They don’t want a date window? Perfect, and the watch benefits. 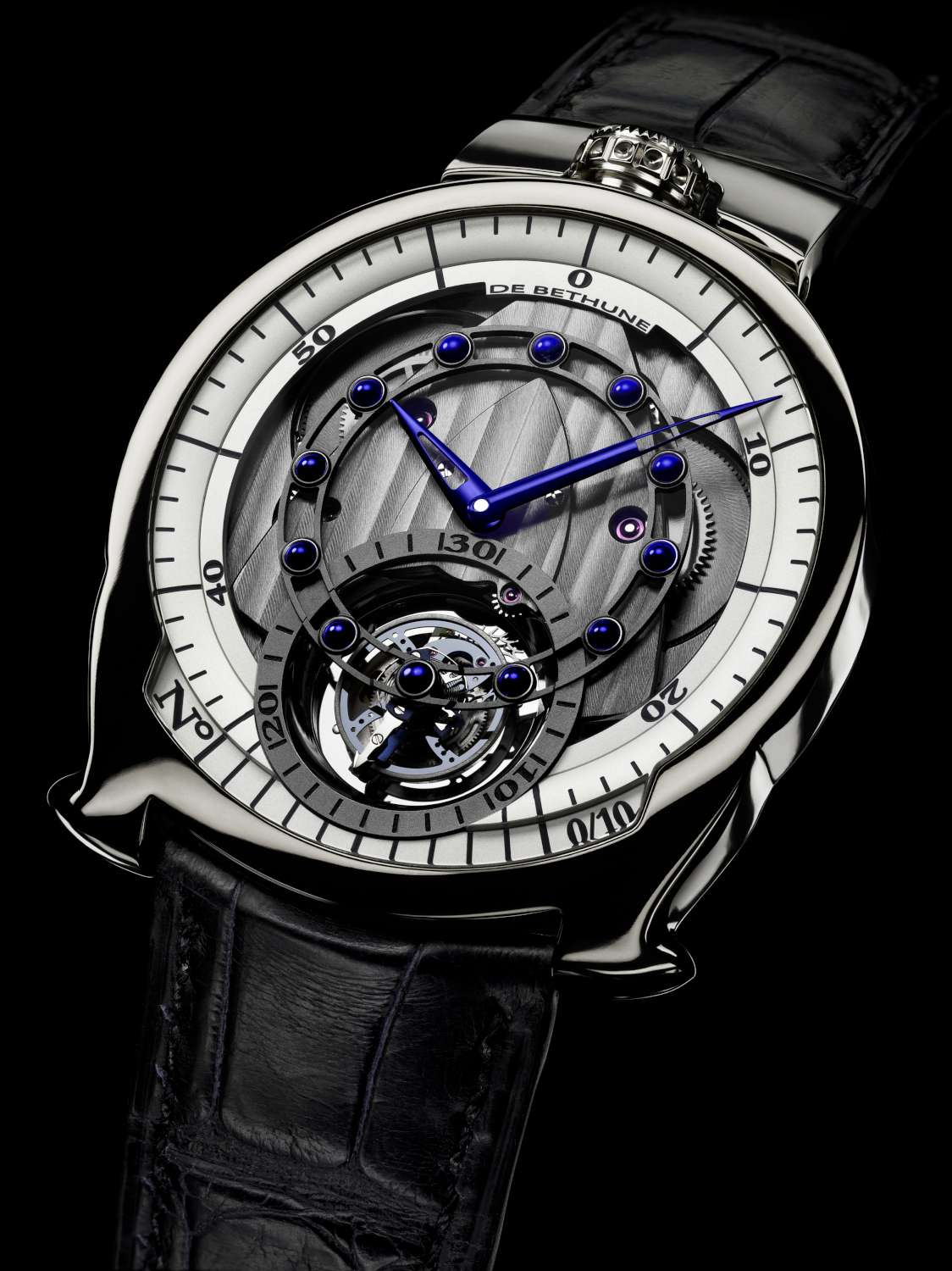 The case is in white gold, 45 mm from top crown to bottom, 42.5 mm wide, 11 mm thick. The conical lower lugs are a design feature, while the hinge device for the upper strap is functional. As the watch is a large piece at 45 mm, the pivoting gold plate, hinged at between about the 11 and 1 o’clock positions, reduces the “wearing size” of the watch, making it more comfortable. This feature that was part of the original 2005 DBS was later developed into the brand’s trademark “floating lugs” on other watches. The ten-piece limited edition number is shown on a sort of scale at the bottom of the dial. 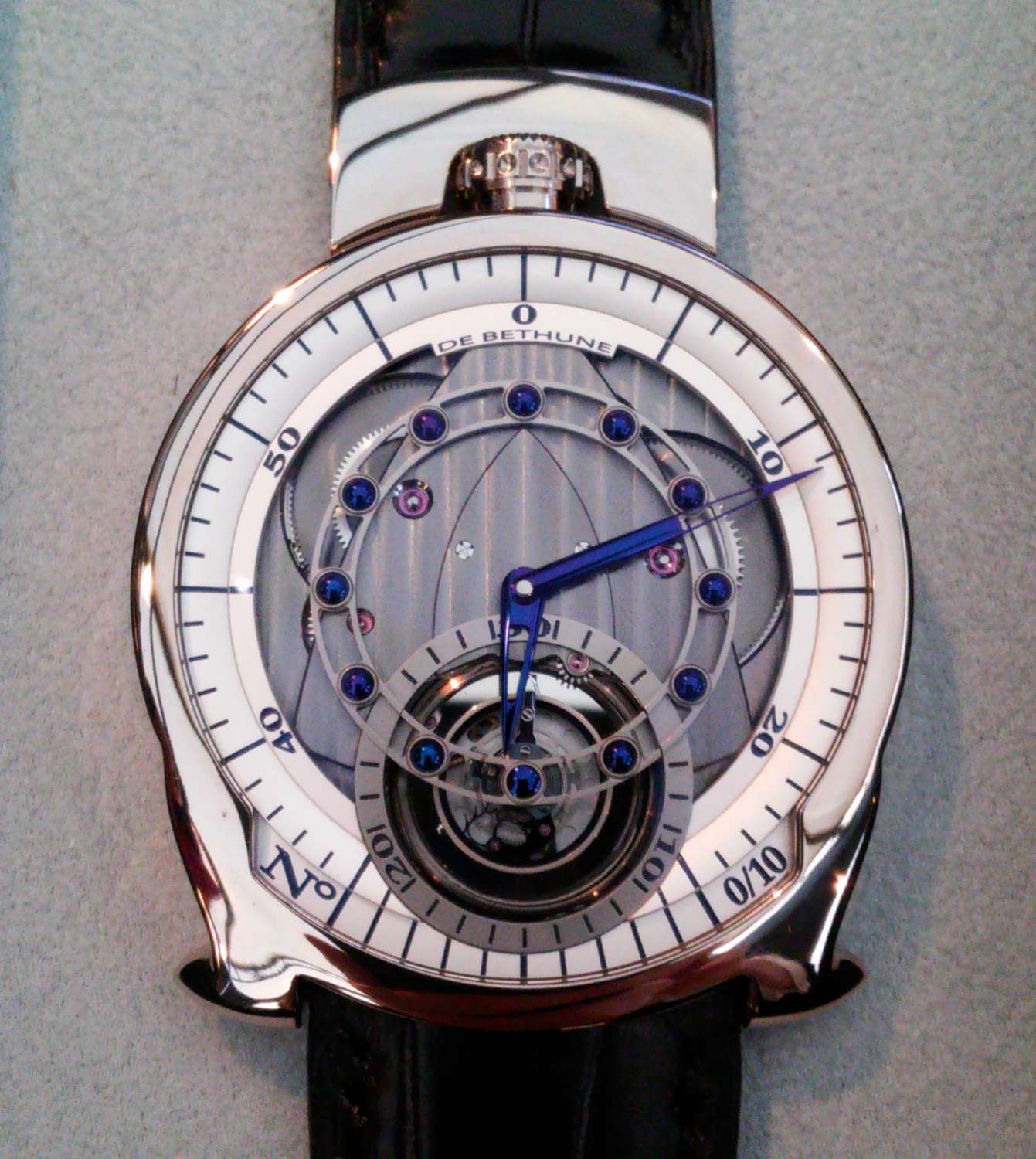 Denis Flageollet believes that a tourbillon regulator for a wristwatch should run faster than for a pocket watch (for which Abraham-Louis Breguet invented the system) to better resist the jolts of the wrist, and so the tourbillon revolves twice a minute, with the regulator running at 36,000 vph (10 Hertz). This is achieved by making the tourbillon assembly very light, a total of just 0.18 grams for all the 63 parts – the lightest of which weighs in at under 0.0001 gram. Weight is kept low by the use of high-tech materials such as silicon and titanium. The bridges are ruthenium-coated and decorated with Côtes De Bethune. The movement, calibre DB2019, is hand-wound, and has a 5-day power reserve, 120 hours. The power reserve is shown by an indicator on the solid caseback. 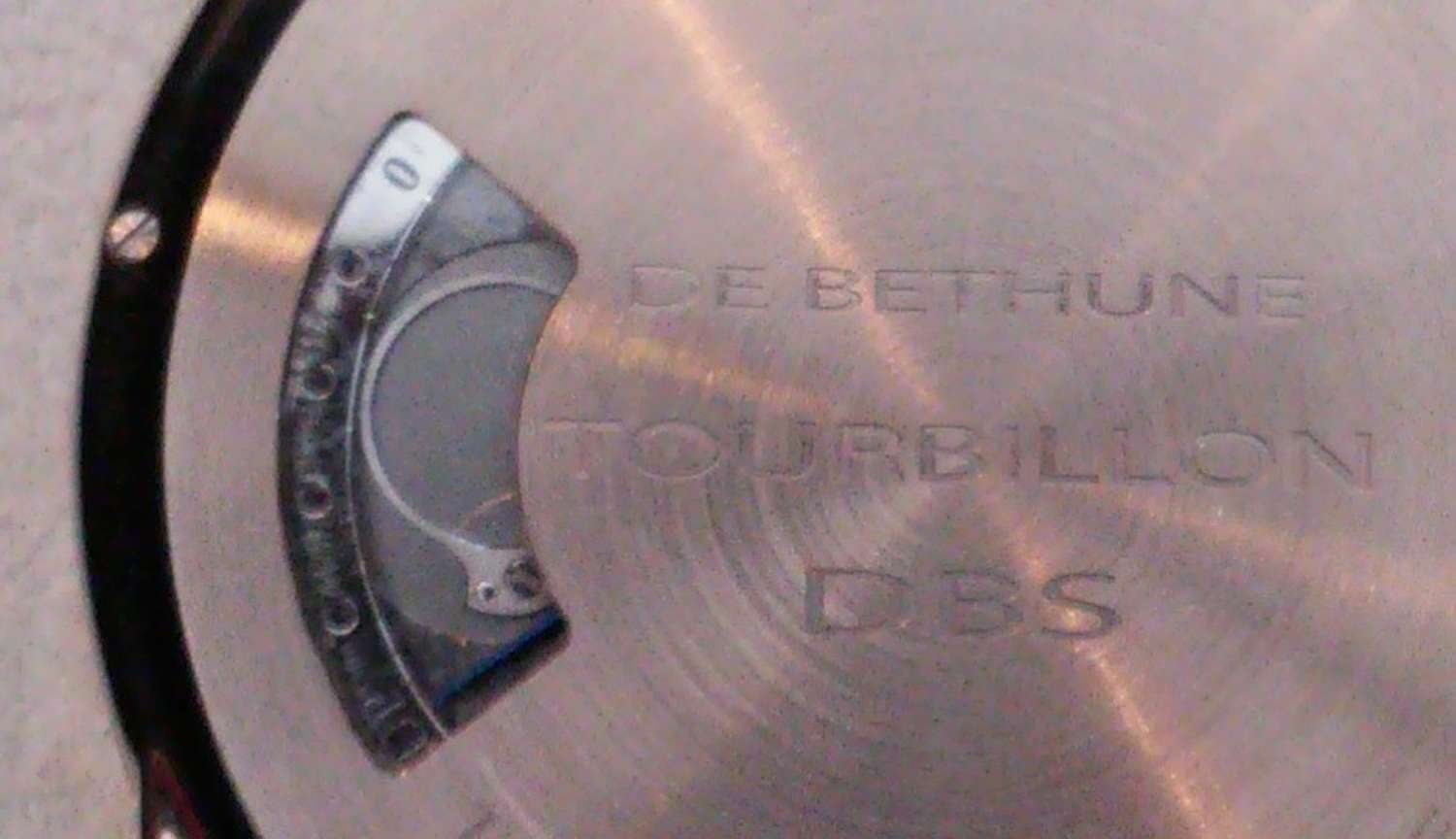 The movement incorporates some of De Bethune’s patents, such as the self-regulating twin barrel that provides the long power reserve and ensures that energy delivery remains constant throughout; the particular design of the balance spring; and the escape wheel in silicon, making it very light, also contributing to the long power reserve. 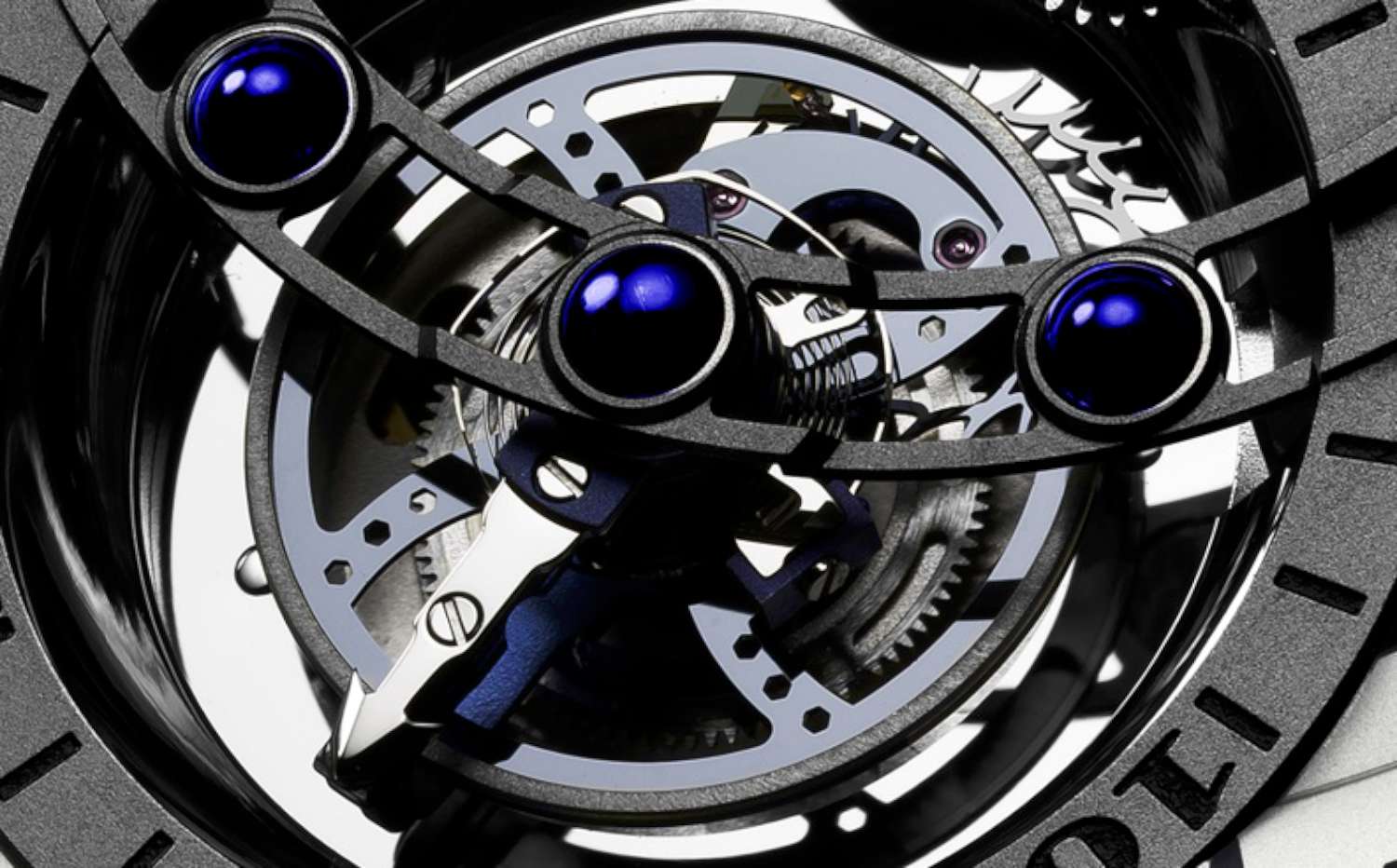 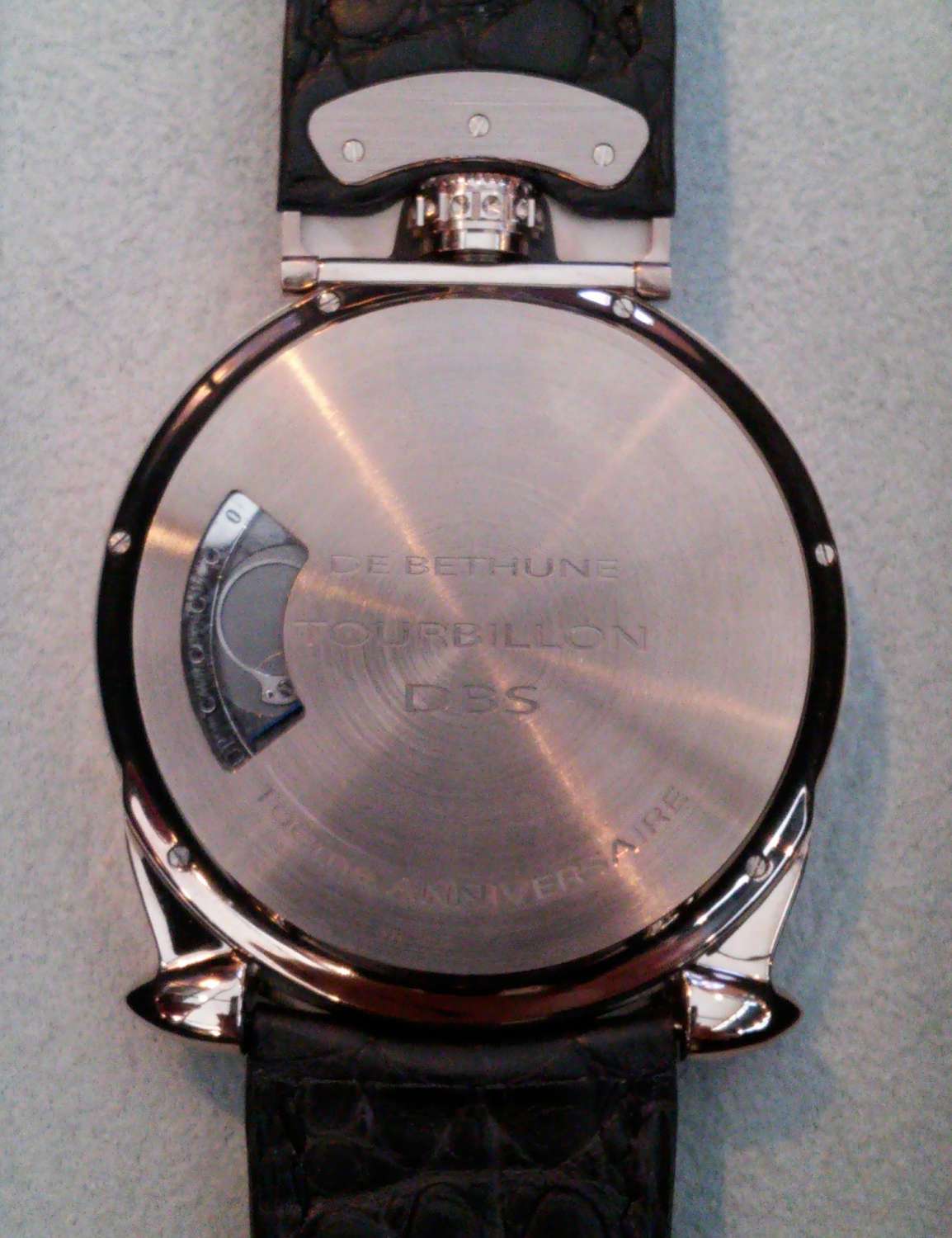