A watch with a moon phase indicator is a very familiar pattern, but Moongarden by Montblanc does something different. It also displays the name of each month’s full moon name, from Ice moon and Snow moon through to Harvest, Hunter and Oak moon (scroll down to read all the lunar month names and meanings). So Montblanc have modified the usual moon phase module, with its approximate period of 29.5 days for a lunar month, so that in addition to the moon phase, the watch also shows the name of the current lunar month, read off next to a small crescent moon on the dial. It’s an unfamiliar concept, and it is based on Native American (the Native Americans themselves prefer the term First Nation) culture. Many Native American tribes used the lunar cycles to keep track of time, giving a name to each lunar month. Their year consisted of 12 or 13 moons, sometimes adding an extra moon every few years to keep the cycle in correspondence with tha actual seasons. The watch, an extension of the Bohème line launched in 2014, was presented – along with the other new piece Montblanc Bohème Day & Night – at an event held in the Tuileries gardens in Paris, with CEO Jérome Lambert and brand ambassadors Charlotte Casiraghi and Gwen Lun Mei.

The watch has a red gold case, 36 mm in diameter, 10.74 mm thick, with bezel set with 78 fine Wesselton diamonds, and caseback with a transparent sapphire window revealing the movement. The crown is set with a Montblanc diamond, a brand patent, with the gem cut in the shape of the Montblanc star. The strap is interesting, because the link between strap and watch has been designed with a simple push-opening system so that the user can easily change it depending on her preference or outfit. There is a black alligator strap and a two-colour calf leather strap in different colours: grey and pastel blue (supplied with the steel version), dark brown and khaki (supplied with the red gold version), yellow and blue, nude and white. The watch has a 30 metre water resistance rating.

The modified moon phase module running the lunar month indicator of the Montblanc Bohème Moongarden was developed at the watch manufacture in Villeret, tMontblanc’s Movement & Innovation Excellence Centre. The lunar month function is adjusted using a pusher on the case side. The names of all the moon months are engraved on the back of the dial, to help the user set the watch. The movement is the calibre MB 29.17, 25 jewels, running at 28,800 vph (4 Hertz), made by an external supplier and with an added complication designed and made by Montblanc. It is self-winding, with a power reserve of about 42 hours. 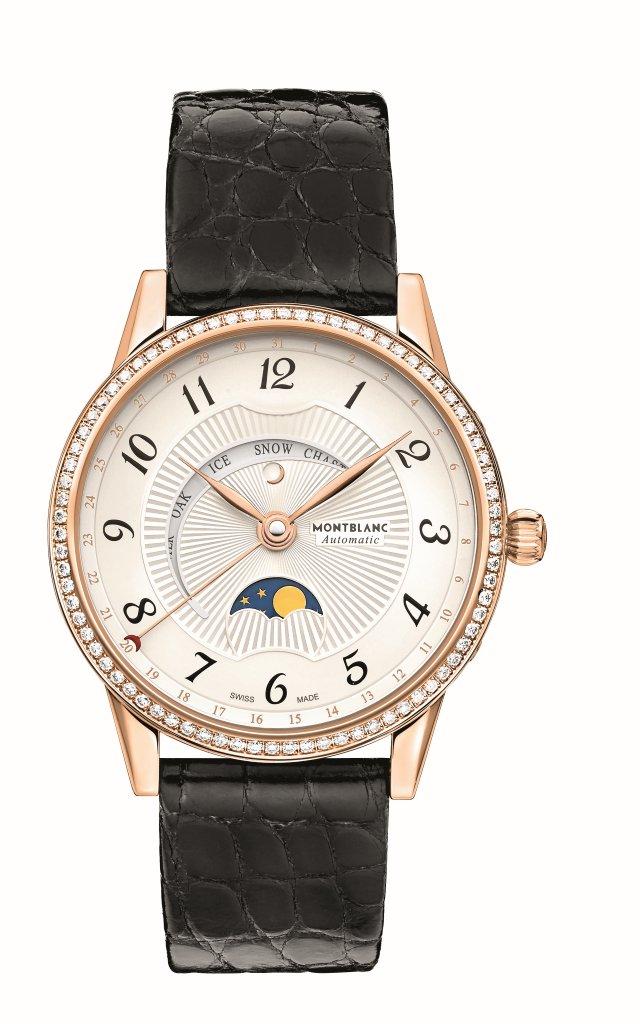 The lunar moons as detailed by Montblanc:

January: Ice Moon
The cold and deep snows of midwinter
February: Snow Moon
Usually the heaviest snows fall in February. Hunting becomes very difficult better to stay in a warm home.
March: Chaste Moon
Virtuous words and actions, together with clear and pure intents, symbolize the Chaste Moon. Purity in this sense indicates a lunar strength, free from imperfection and things that hinder, impair, and weaken it-an energetic strength.
April: Seed Moon
This name came from the wild ground phlox, which is one of the earliest widespread flowers of the spring.
May: Bright Moon
In most areas, flowers and sun are abundant everywhere during this time. The moon is also particularly bright and long in the sky.
June: Dyan Moon
Dyan represents the pinnacle of life and used here to reference Midsummer’s Night with the longest day.
July: Rose Moon
This full Moon heralded the appearance of the moss pink and has the color of a rose strawberry.
August: Red Moon
The August’s full moon is referred to as the red moon for the reddish hue it often takes on in the summer haze.
September: Fruit Moon
Farmers work late into the night by the light of the Moon to pick fruits in trees.
October: Harvest Moon
The full Moon that occurs closest to the autumnal equinox. It can occur in either September or October. At this time, crops such as corn, pumpkins, squash, and wild rice are ready for gathering.
November: Hunter Moon
This is the month when the leaves are falling and the game is fattened. Now is the time for hunting and laying in a store of provisions for the long winter ahead.
December: Oak Moon
The oak is a symbol of strength and eternity. The gathering of mistletoe from the oak trees was on the sixth day of the full Moon. The mistletoe could only be cut with a golden sickle in the shape of the Moon’s crescent.