Bust of Marcus Aurelius seems to project above the dial, by means of the holographic effect generated by the mirascope

Hour and minute hands on concentric discs in anticorodal aluminium 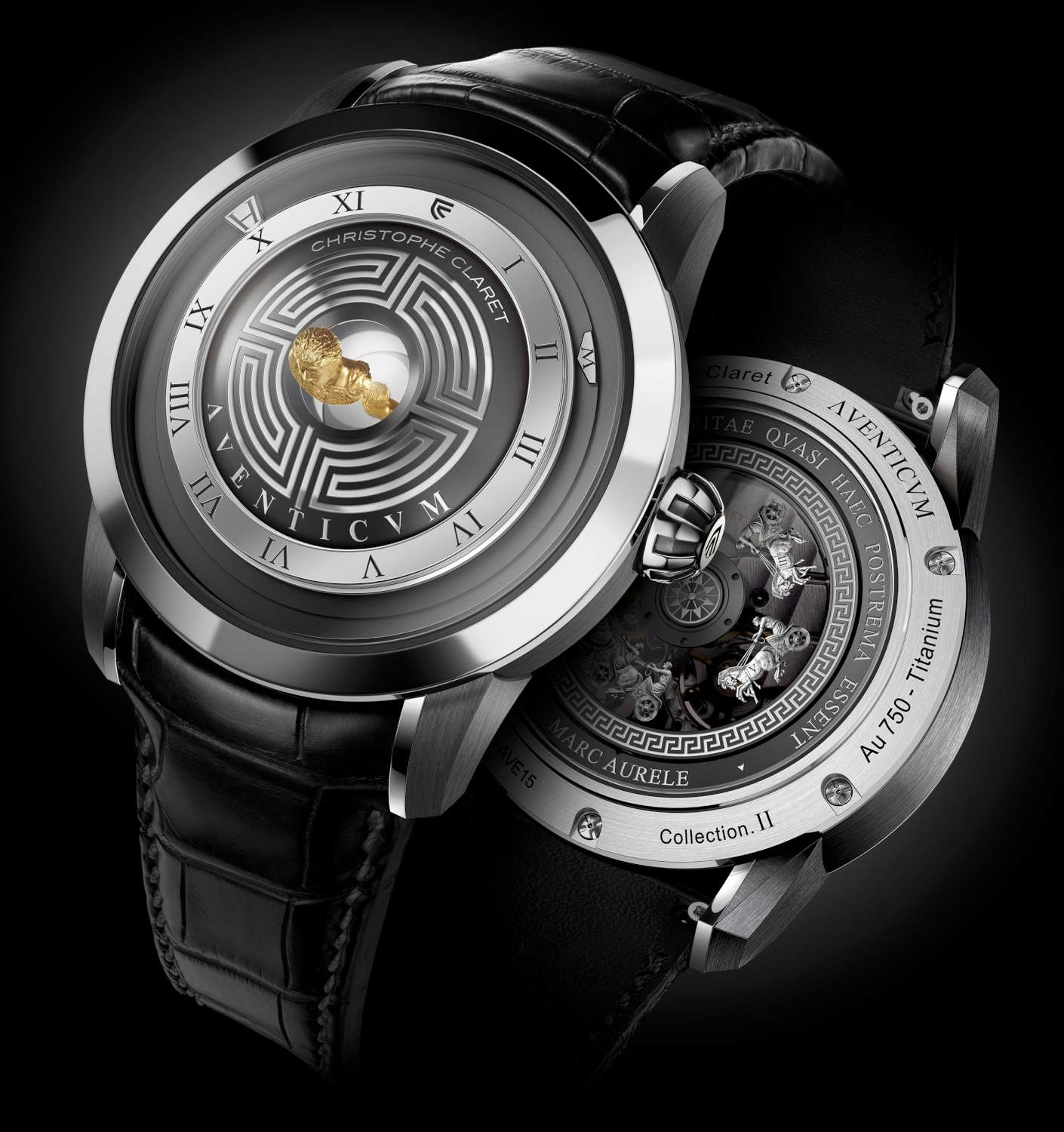 It’s amazing how you just have to introduce some Ancient Rome, and a watch immediately reminds you of Versace or Bulgari. Motifs such as Roman capital letters (AVENTICVM instead of AVENTICUM) and the meander pattern are so powerful that they give anything a hallmark of classicism. The watch Aventicum was designed to highlight the Ancient Roman remains in the Swiss town of Avenches, where excavations have revealed all sorts of artefacts including a gold bust of the emperor Marcus Aurelius, found in the remains of a pipe. One of Claret’s ambitions with this piece is to attract funding for the work of the Avenches museum.

A watch with a hologram

A toy mirascope, courtesy of amazon.com

At the centre of the dial is embedded a micro-engraved gold replica of the gold bust, within a mirascope. This optical instrument consists of two identical parabolic mirrors, one on top of the other forming a sort of flying saucer shape. The object goes inside, there is a hole in the top mirror, and the result is a three-dimensional holographic image, so that the object is magnified about two times and appears to be coming out the top. It’s an interesting effect, you have to see it to appreciate it. As the mirascope is at the very centre of the dial, Claret had to find another solution for the hands, which are pointers on concentric discs in anticorodal aluminium. 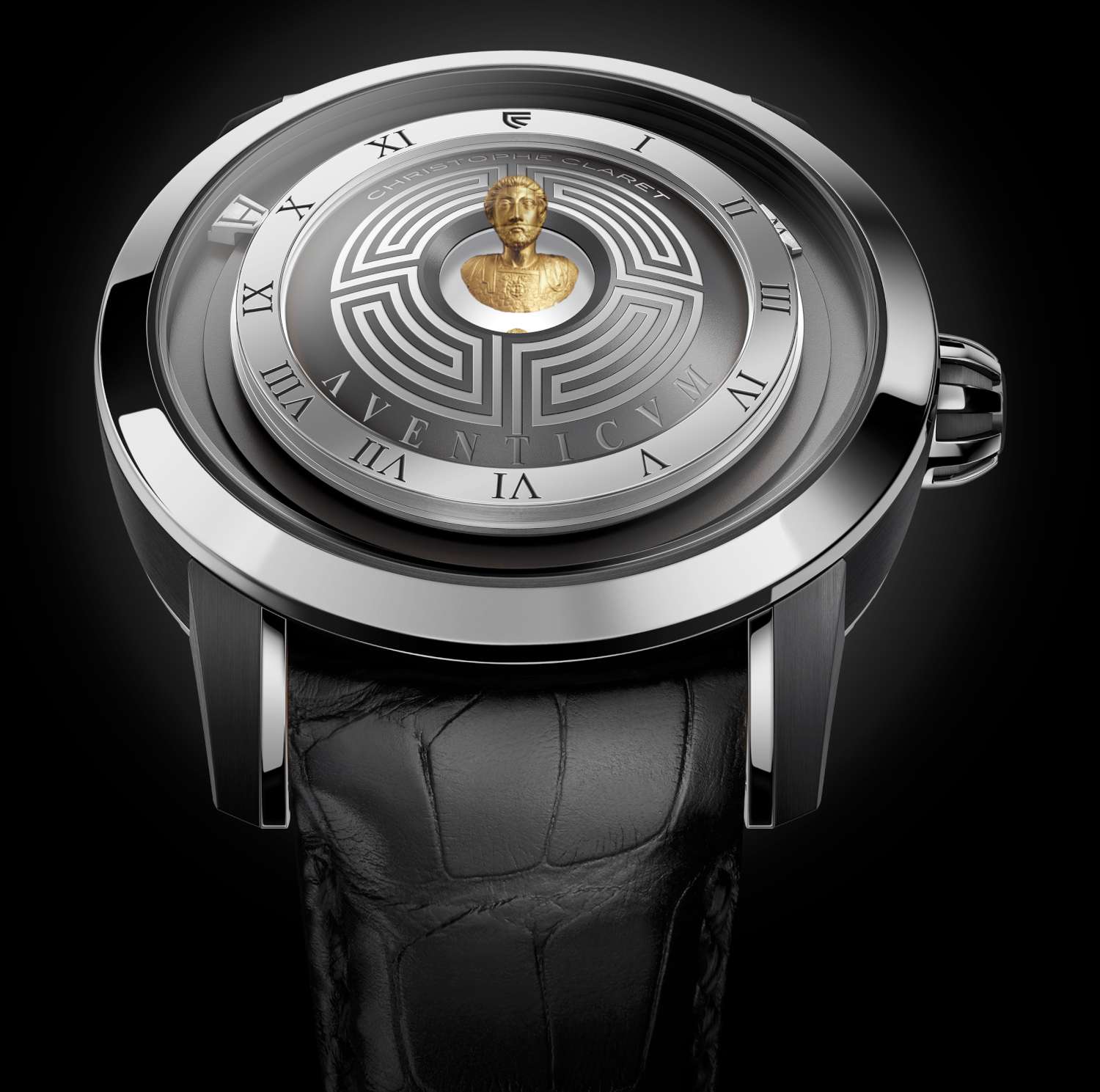 The watch has an automatic movement, in which the rotor bears five numbered chariots. Christophe Claret makes a lot of gaming watches, with miniature baccarat, poker and roulette games, and so he couldn’t resist adding the chance of betting on something: which chariot ends up closest to the A of Aurèle engraved around the edge of the caseback, after you have set the rotor in motion by waving the watch a bit. But Christophe seems to be warning users against getting too addicted to this activity by providing a motto by Marcus Aurelius, who was emperor but also a philosopher in his spare time, on the caseback: “Perfice Omnia facta vitae quasi haec postrema essent”, or “Perform every act in life as though it were your last.” 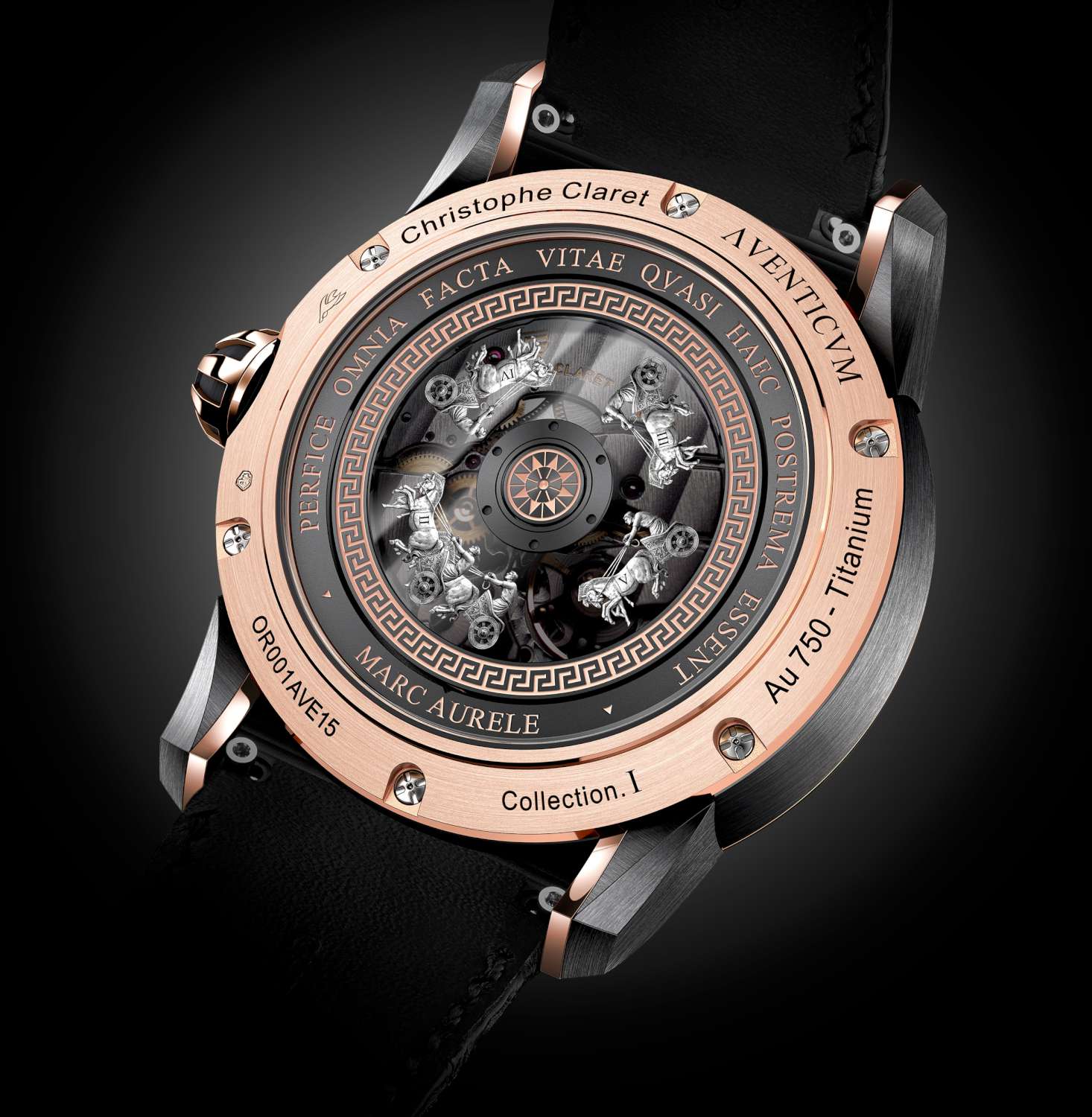 The movement is the AVE15 calibre, with 186 components and two mainspring barrels providing a power reserve of 72 hours. The winding rotor, in which the peripheral part with the chariots seems unconnected to the central axis, is made using a transparent sapphire disc, a Vianney Halter patent.

Christphe Claret is a brand making about a hundred watches a year and so though the first Aventicum watches are now being delivered, you have to be patient. Aventicum is available in two limited editions, 68 pieces in 5N red gold and PVD-treated titanium, and 38 pieces in white gold and PVD-treated titanium. The version in white gold costs 53,000 Swiss francs, that in red gold costs 49,000 Swiss francs.