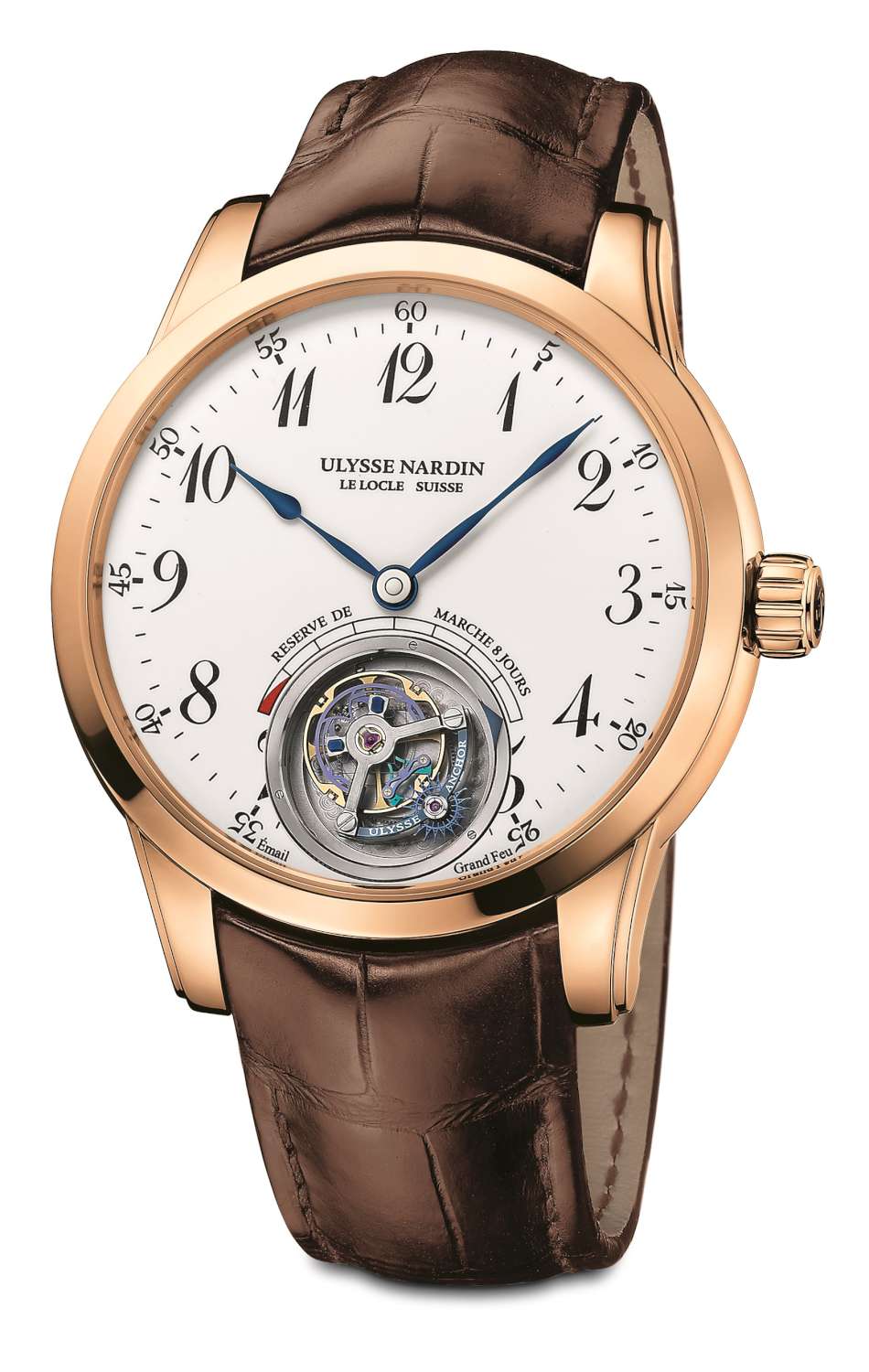 The Ulysse Anchor Tourbillon is a remarkable watch incorporating bi-stable blade technology, similar in principle to the Girard-Perregaux Constant Escapement L.M.
Ulysse Nardin became part of the Kering Group in August 2014 and so it is now in the same family as Girard-Perregaux and Jeanrichard. This piece was preceded by the prototype presented last year, though it represents the culmination of eight years’ research and development. Ulysse Nardin is particularly active in developing original research: it was the first brand to use silicon in the esapement in 2001, and it now has a factory for silicon escapements.

The constant escapement in this watch, part of the calibre UN-178 movement, has been used not in an ordinary escapement but in a tourbillon. The principle is not easy to describe: while a normal escapement has a pallet fork mounted on a pivot, in this watch it is mounted on two blade springs whose geometry keeps them in a bistable state – as for the Girard-Perregaux Constant Escapement, a useful analogy of a bistable blade spring is that of a train ticket held between two fingers and snapped back and forth. As a blade spring distorts easily in one plane but is rigid in the perpendicular plane, two blade springs mounted at right-angles function exactly like a pivot, but without the friction of a pivot’s staff. The impulse that causes the two blades to change state is provided by the balance wheel, and so the pallet fork rocks back and forth around a virtual pivot. This can be described as a constant-force escapement because the blades always absorb and and deliver the same amount of energy in their transition from one geometrical state to the other. The blade springs, made in silicon, are incredibly thin: less than a tenth of the thickness of a human hair.

The pallet fork has therefore been completely redesigned, and the geometry of this component, along with the escape wheel and balance wheel, is such that the energy that the balance wheel delivers to the pallet fork to kick it across is less than the energy that is receives from the two blade springs immediately after. So the balance wheel maintains a positive energy balance. This is one of the reasons why this tourbillon – notoriously a mechanism that absorbs a lot of energy – has a power reserve of at least seven days. Other reasons include the 18,000 vph (3 Hertz) balance speed, the two mainspring barrels, and the very light tourbillon cage. The 60-second tourbillon has a cage comprising 35 components but weighing just 0.4 grams. The power reserve is shown on a circular arc indicator around the opening for the tourbillon. The watch is manually-wound. 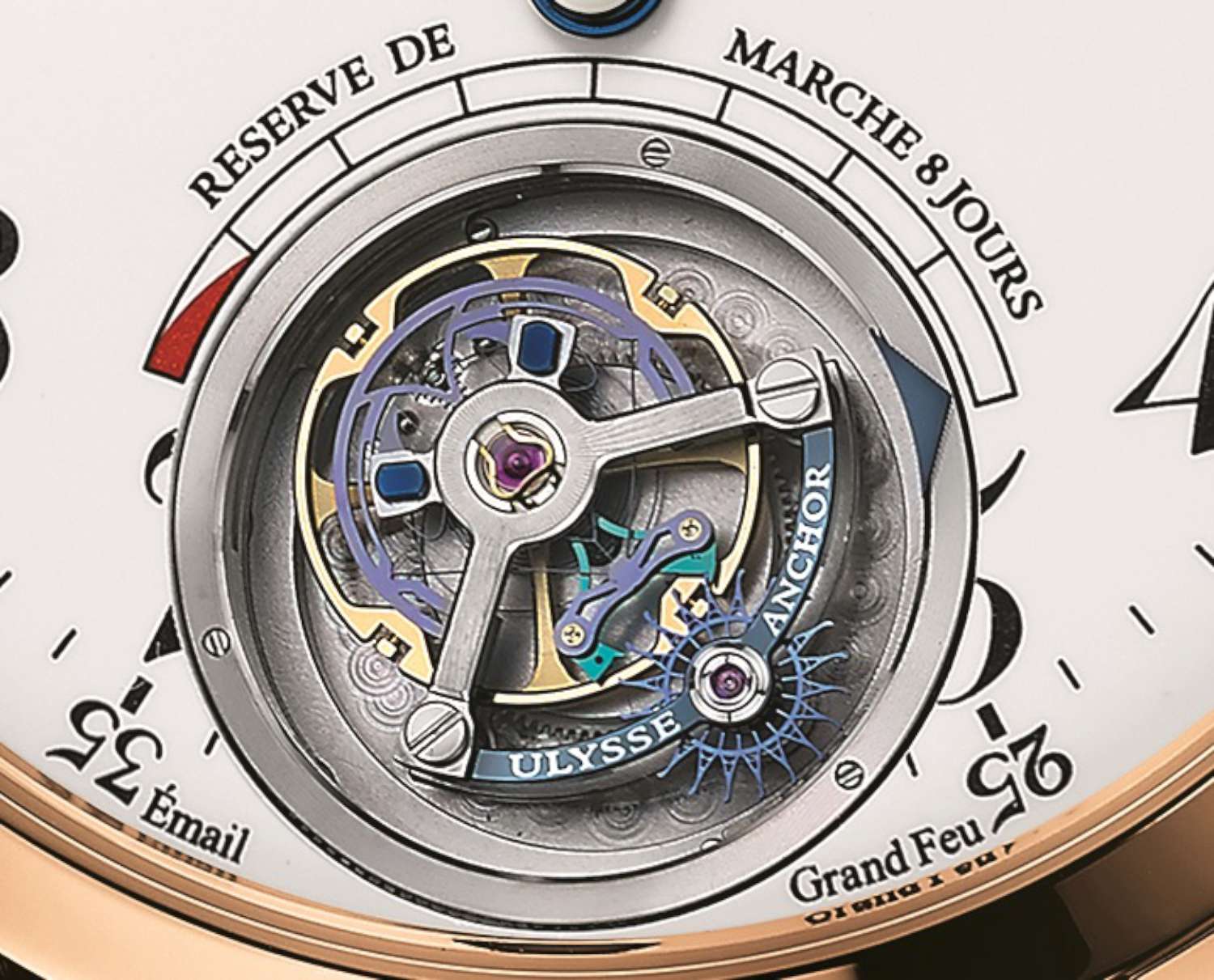 The watch has a 44-mm case in rose or white gold, with a grand feu enamel dial made by Donzé Cadrans, a dial-making company owned by Ulysse Nardin. The watch has a sapphire caseback, and a leather strap with pin-buckle. Water-resistance 30 metres. 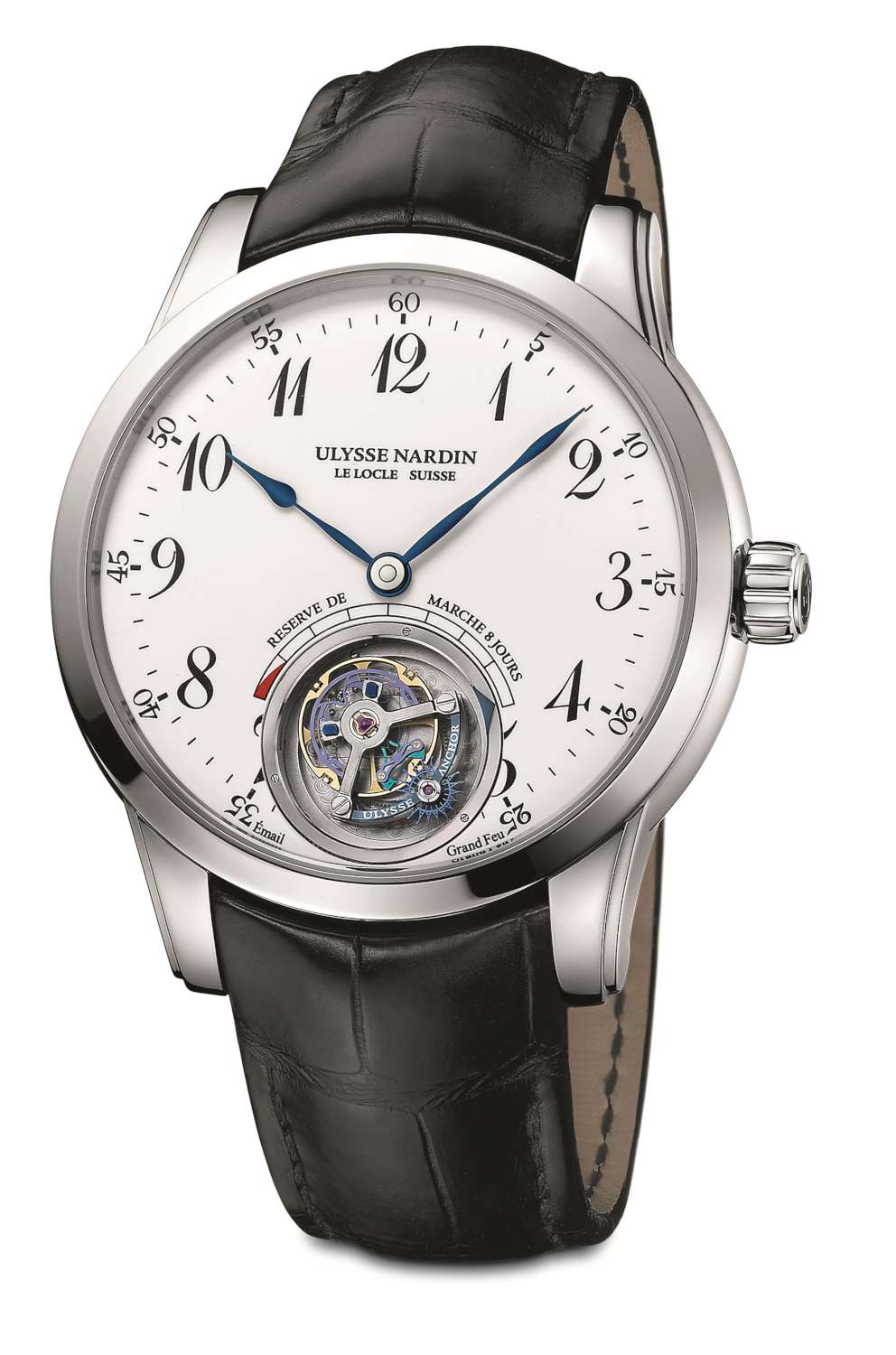