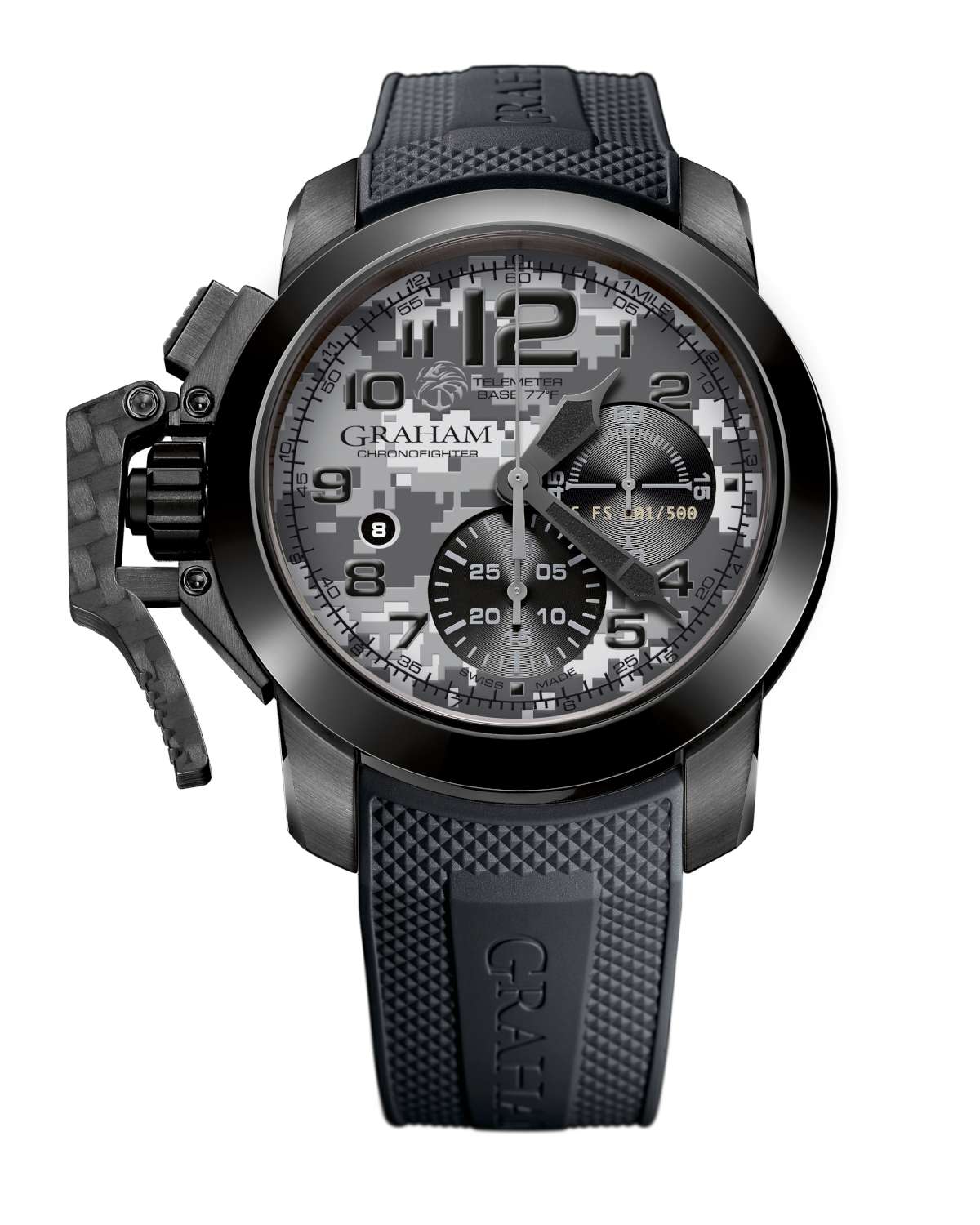 This large, military-style watch is made by Graham, a company based in La Chaux-de-Fonds, Swiss watchmaking town par excellence, and founded in 1995 by Eric Loth. The name comes from English clockmaker George Graham (1673-1751), who made several improvements to the pendulum clock and introduced the so-called Graham escapement, in actual fact invented in about 1675 by another scientist. This watch is a cooperation with the Navy SEAL Foundation, a charity organization that provides support and assistance for Navy SEAL soldiers (whose operations and gruelling training programme have inspired several films, such as G.I. Jane directed by Ridley Scott and starring Demi Moore) and their families. Part of the proceeds from the limited-edition watch will go to the Navy SEAL Foundation. 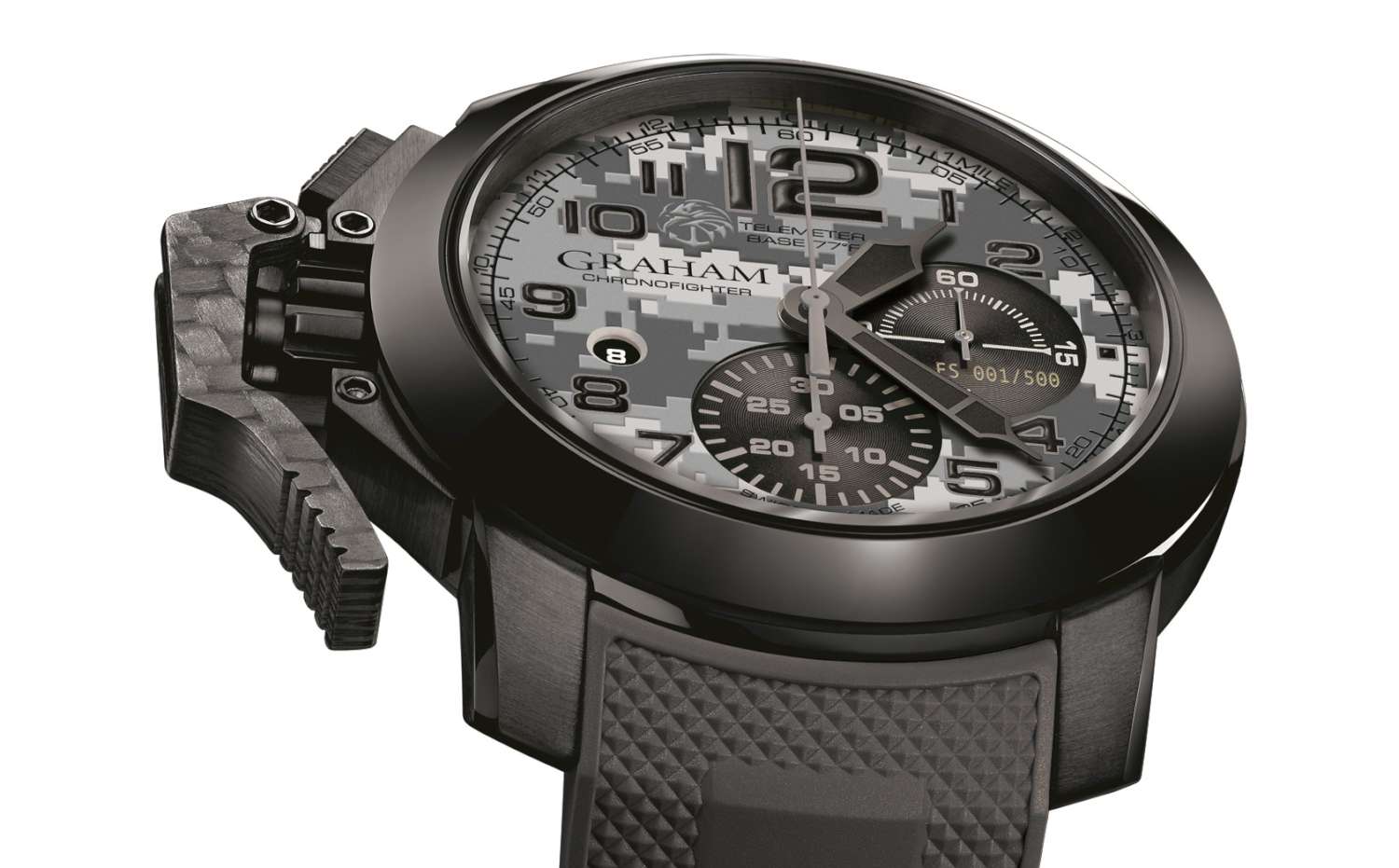 The Chronofighter Oversize Navy SEAL Foundation has a tough, military look, with a large 47 mm steel case with black PVD coating, dial with a grey camouflage pattern, and hands coated with black SuperLuminova. The watch is a chronograph, with a 30-minute counter on the subdial at 6 o’clock, and continuous seconds at 3 o’clock. There is a small date window near the numeral 9, and the SEAL Foundation logo appears near the 11. Around the edge of the dial there is a telemeter scale outside the minutes chapter ring, calculated in miles at 77°F: the scale is used with the chronograph to calculate the distance of an explosion, rifle shot, stroke of lightning etc., so that you start the chronograph when you see the flash and stop it when you hear it (sound travels at the speed of 1 km in 3 seconds, 1 mile in about 5 seconds). The chronograph controls are interesting, placed on the left-hand side of the watch instead of the customary right, and with a trigger-type start-stop lever in black carbon fibre that operates on a button in the crown. The other pusher above is the reset button. On the back of the watch, the sapphire caseback provides a view of the movement below an American flag printed in such a way as to reveal what lies underneath (you can see the Graham logo on the oscillating weight). The watch has a black rubber strap with carbon fibre reinforcement, and a black ceramic buckle. The case is water-resistant to 100 metres. 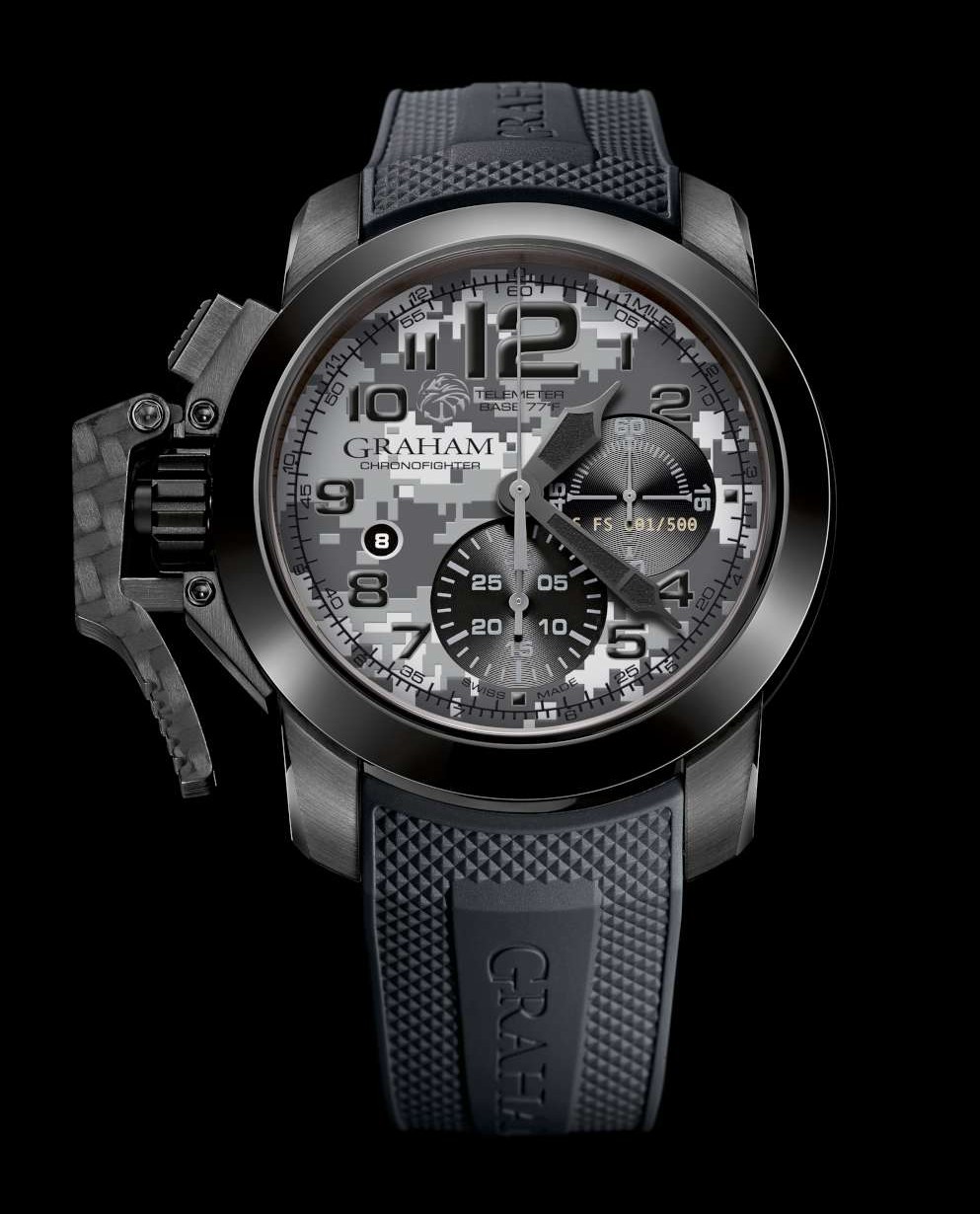 The G1747 automatic movement runs at 28,800 vph (4 Hertz) and has a power reserve of 48 hours. The movement is possibly made by La Joux Perret, Swiss manufacture belonging to Japanese company Citizen, and it is based on something like the Valjoux 7750, modified by rotating the movement by 180° so that the date window and chronograph pushers are on the left, and the minute counter is at the bottom instead of the top. 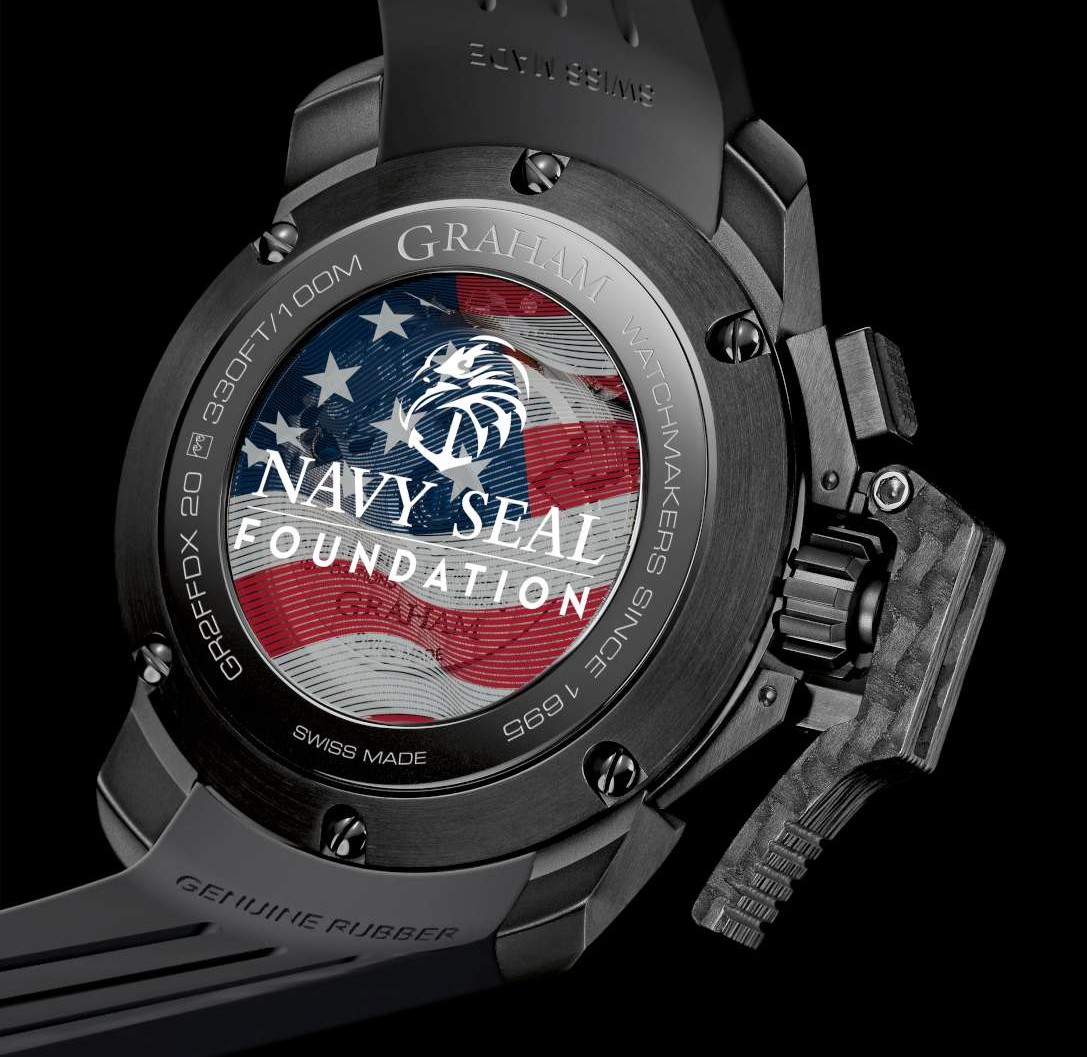 The Graham Chronofighter Oversize Navy Seal Foundation, reference 2CCAU.S03A, is a limited edition of 500 pieces. Each costs US$ 8,050. The watch has a presentation box that includes what looks like a U.S. MX-991/U flashlight. Visit the Graham website http://www.graham1695.com/ for a list of retailers. 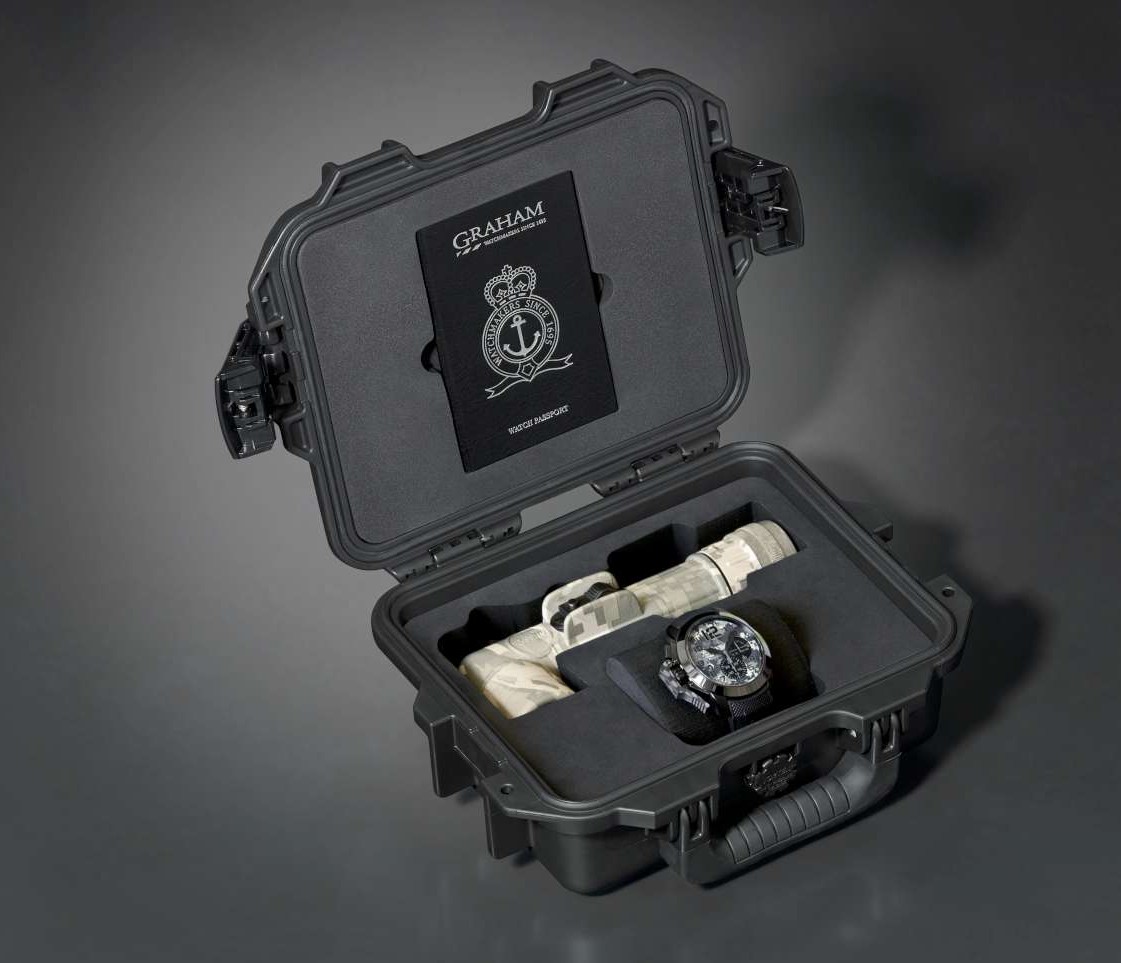 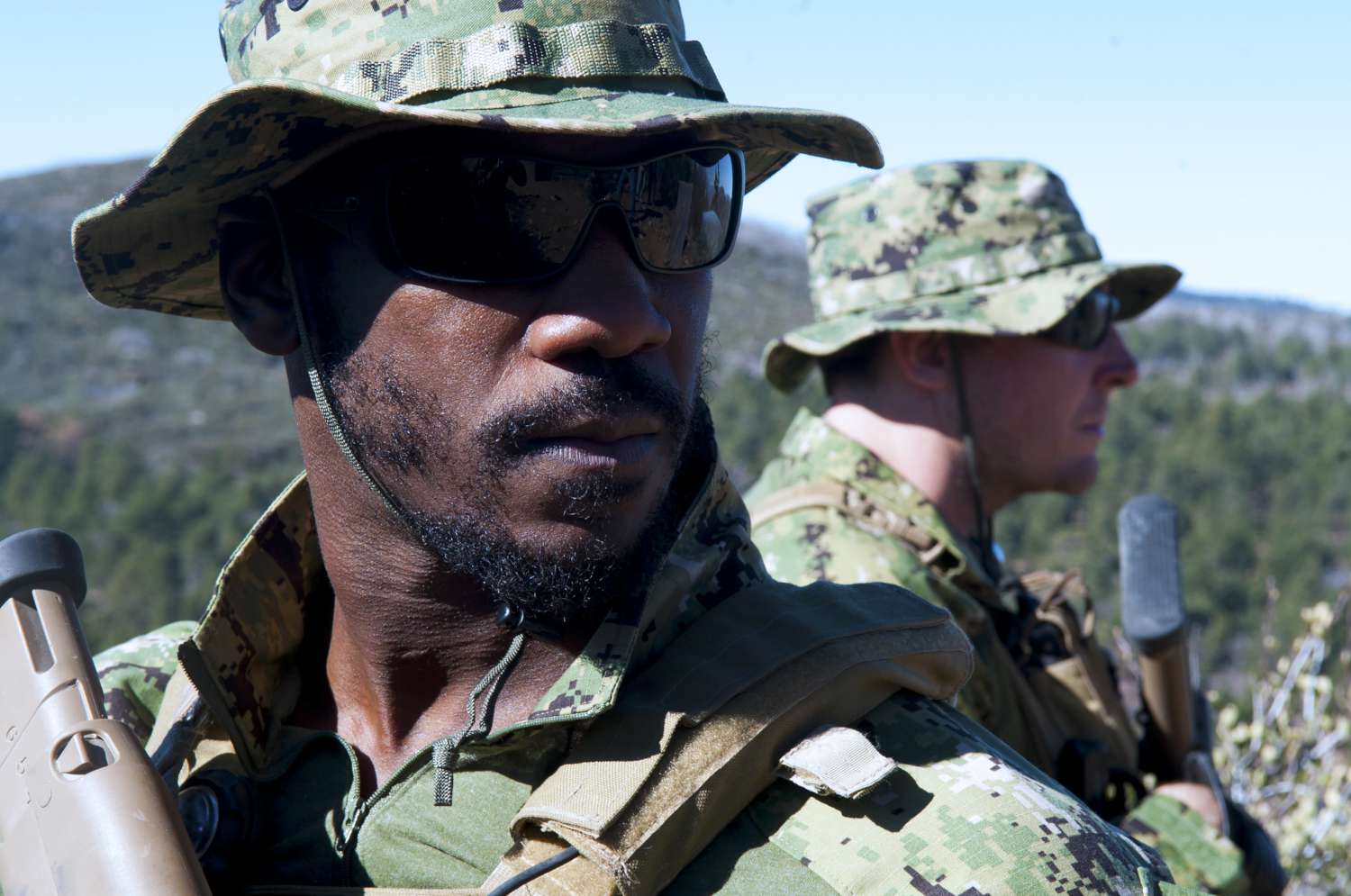