Decoration in the form of two hand-engraved phoenix heads, with a diamond at the centre. The tourbillon lies below

Earth, a blue sphere in sapphire 3.2 mm in diameter, revolving once a year and indicating star-sign and date

The moon, a sphere in rhodium just under a millimetre in diameter, revolves around the earth once every 27 days circa

Mars, a ruby sphere 1.7 mm in diameter, making a complete circuit in a Martian year, about 687 Earth days

Crown that moves the planets, the moon, and the calendar on the caseback forwards or back

Crown that winds the movement and sets the time 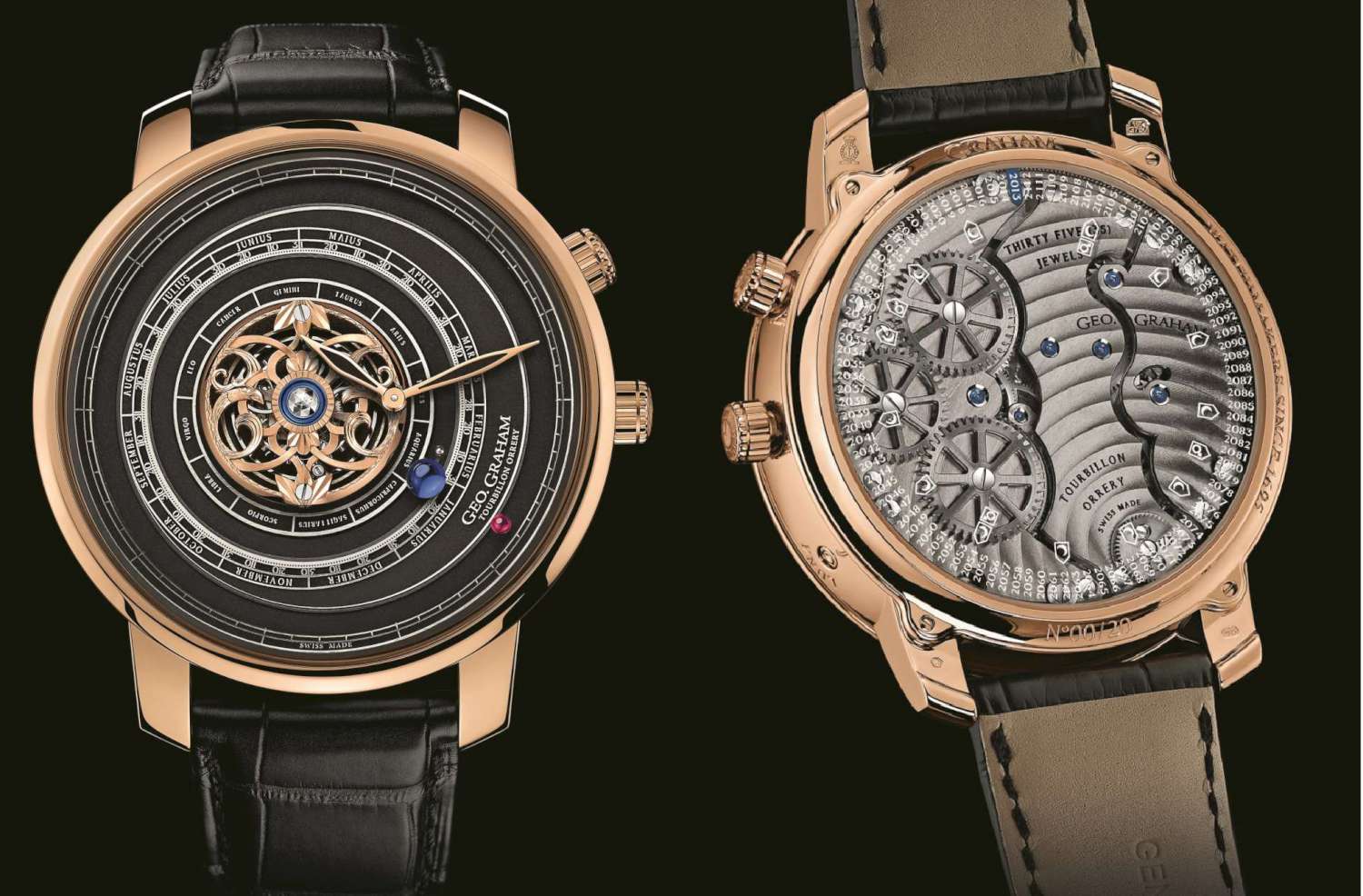 A brief digression on a watch that took me by surprise, that was presented in 2013 as a limited edition, that is a type that I think we will see more of over the next few years. Eric Loth founded his company Graham in 1995, and though I can’t help being a bit suspicious of a brand whose tagline is “Watchmakers since 1695” even though they have been operating for just 20 years, I am beginning to glimpse the alchemy and the numerology of it all. English clockmaker George Graham (1673-1751) served a seven-year apprenticeship before being admitted to the Clockmakers’ Company in 1695. In a way, Eric Loth, who grew up in Le Locle, studied engineering in Neuchâtel, and worked for Rado and Swatch Group, also served a much longer apprenticeship before deciding to set up business on his own, acquiring rights to the Graham name and starting the company exactly 300 years after his illustrious predecessor.

The Geo. Graham Tourbillon Orrery itself counts down 300 years, with a 100-year calendar on the caseback, with two extra discs that bring the total up to 300. The watch was presented in 2013, 300 years after George Graham completed his own Orrery in 1713. At least, that’s what the brand says: according to Scientific American Inventions and Discoveries, the first modern orrery was built by George Graham and Thomas Tompion in about 1704. No problem: the strange name came about because a copy of Graham’s piece was presented to the aristocrat Charles Boyle, 4th Earl of Orrery, presumably in 1713 (the term orrery has existed since 1714). 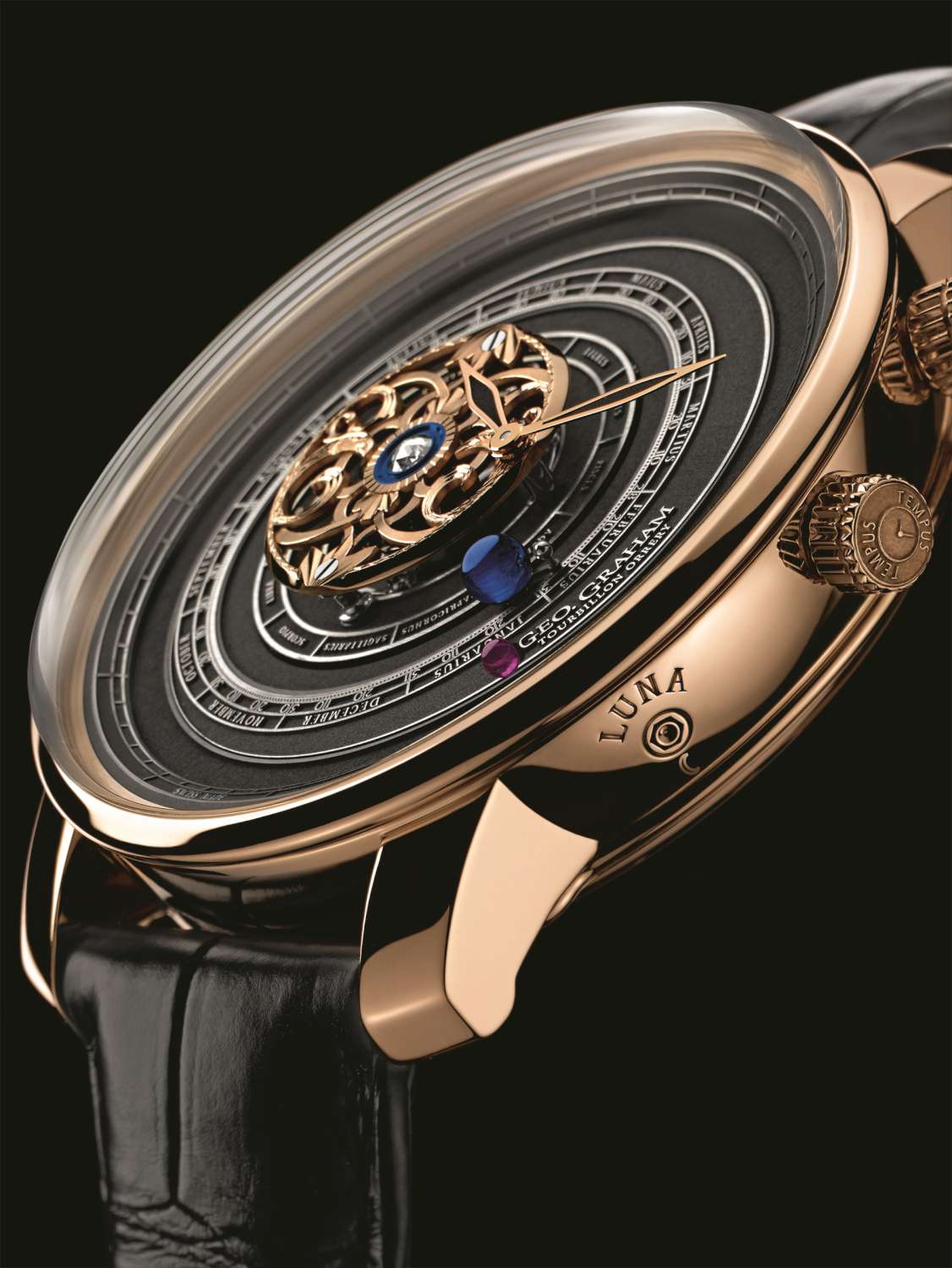 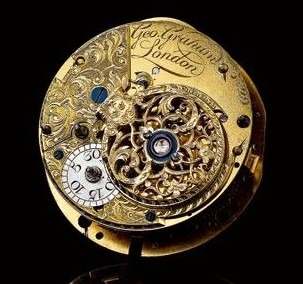 A movement by George Graham, with the decorative motif that appears on the Tourbillon Orrery

Eric Loth and his design team started from George Graham’s concept, and added something of the aesthetics of an original movement by the English watchmaker. At the centre of the Tourbillon Orrery is a tourbillon surmounted by an ornate decoration in the form of two hand-engraved phoenix heads, with a diamond at the centre. The tourbillon lies below this openwork decoration. The first thing that you notice about the dial is that it’s all off-centre, in part by necessity, perhaps in part due to a sort of quirky design flair. The hour and minute hands are to the right of centre, and they are read off the scale at the edge of the dial, which corresponds to the position of the hands. The band around the central tourbillon is dedicated to star-signs, and the next to dates and the months, written in Latin. Between these two bands is the Earth, represented by a blue sphere in sapphire 3.2 mm in diameter. So the earth revolves around the sun (represented by the diamond right at the centre) once in a year and indicates the position in the zodiac and the yearly calendar. A tiny moon, a sphere in rhodium just under a millimetre in diameter, revolves around the earth once every 27 days approximately. Further out, a ruby sphere 1.7 mm in diameter depicts Mars and makes a complete circuit in a Martian year, about 687 Earth days. The dial is strongly three-dimensional, with the tourbillon and hands raised with respect to the dial and the planet (so that the planets can pass under the hands). The watchglass is also double-domed, higher at the centre. The case is in pink gold, 48 mm in diameter and 17.6 mm thick, water-resistant to 50 metres. 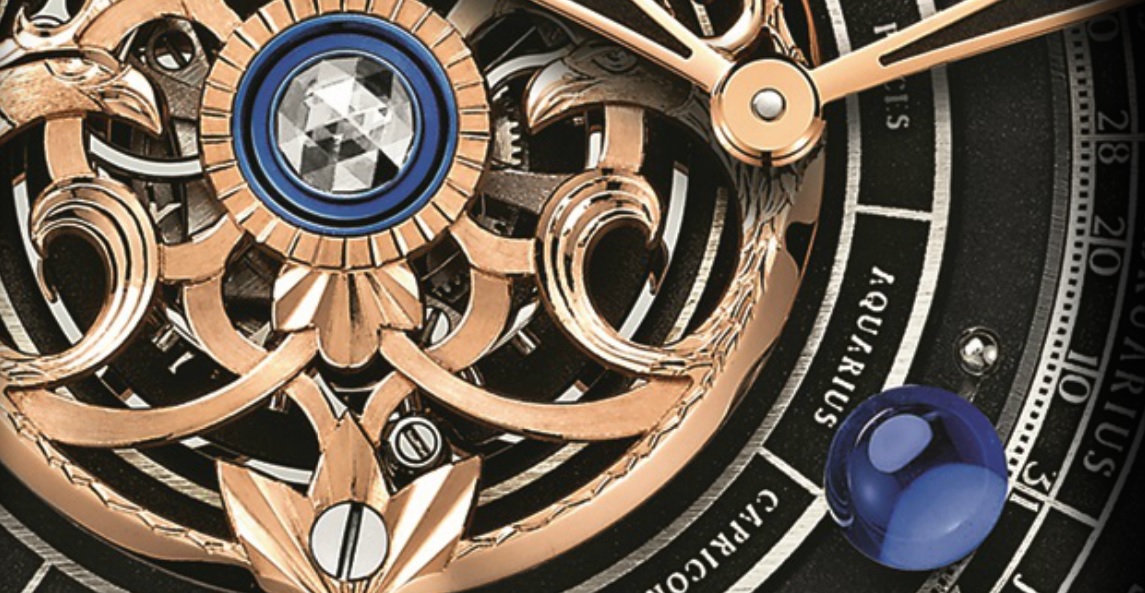 The caseback reveals a few wheels of the movement, the bridges with Côtes de Genève decoration, and a sapphire disc engraved with 100 years starting from 2013 to 2112. There are other markings on the disc which indicate when corrections have to be made to keep everything synchronized (every 7 years for the moon, every 25 years for Mars, every 1,156 years for the Earth). The watch can be adjusted using the crown at 2 o’clock, which advances the planets, the moon, and the calendar on the caseback: the calendar and the planets can be moved forwards or backwards as desired, important because if you have a watch like this, you’re going to want to play with it a bit. There is a recessed corrector for the moon at 4 o’clock, and for Mars at 10 o’clock. The crown at 3 o’clock is for winding the movement and setting the time. 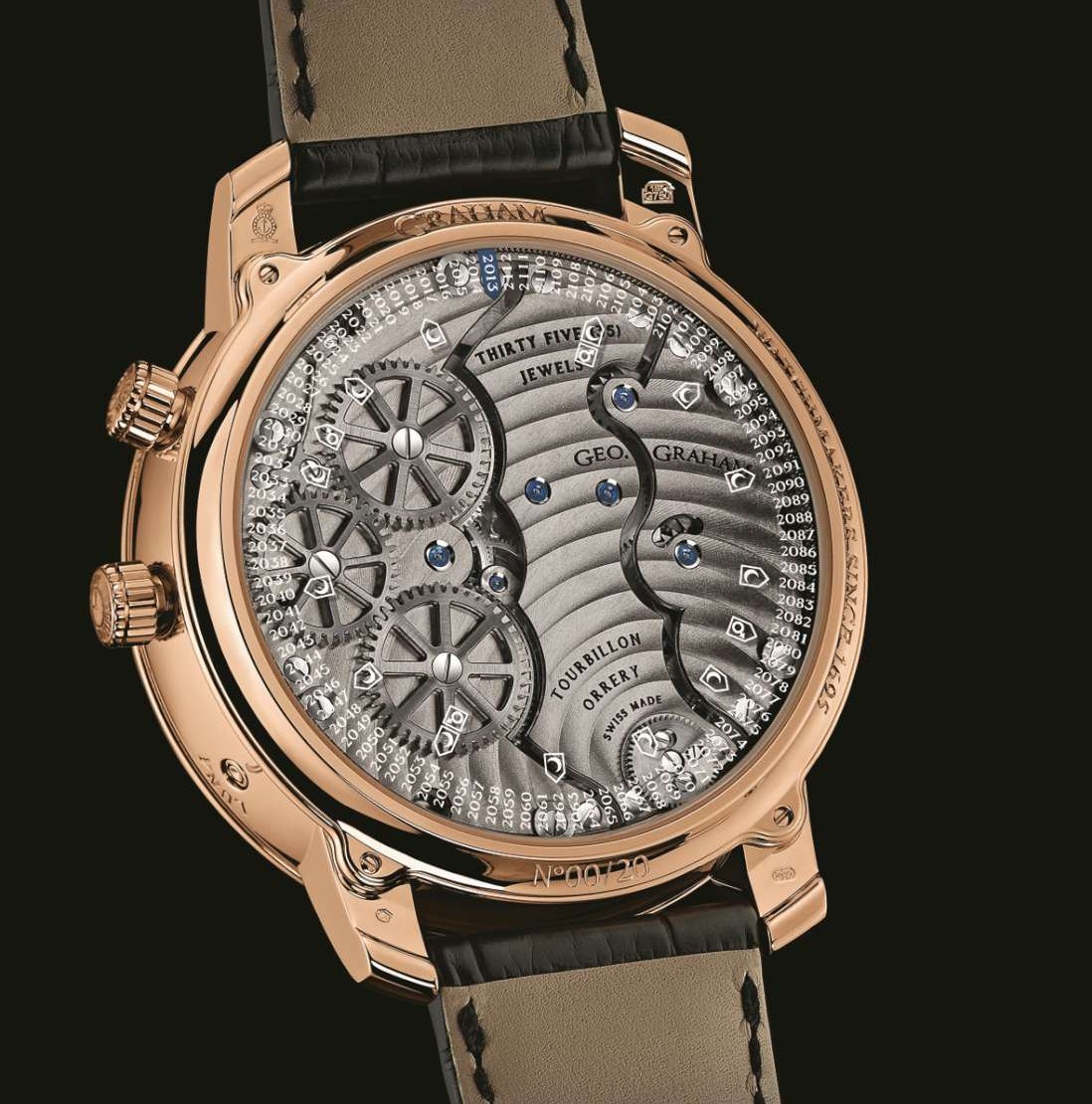 The G1800 movement was made for Graham by Christophe Claret, whose manufacture is up on the hill above Le Locle, where Eric Loth grew up. It runs at 3 Hertz (21,600 vph) and has a power reserve of 72 hours provided by the two mainspring barrels. 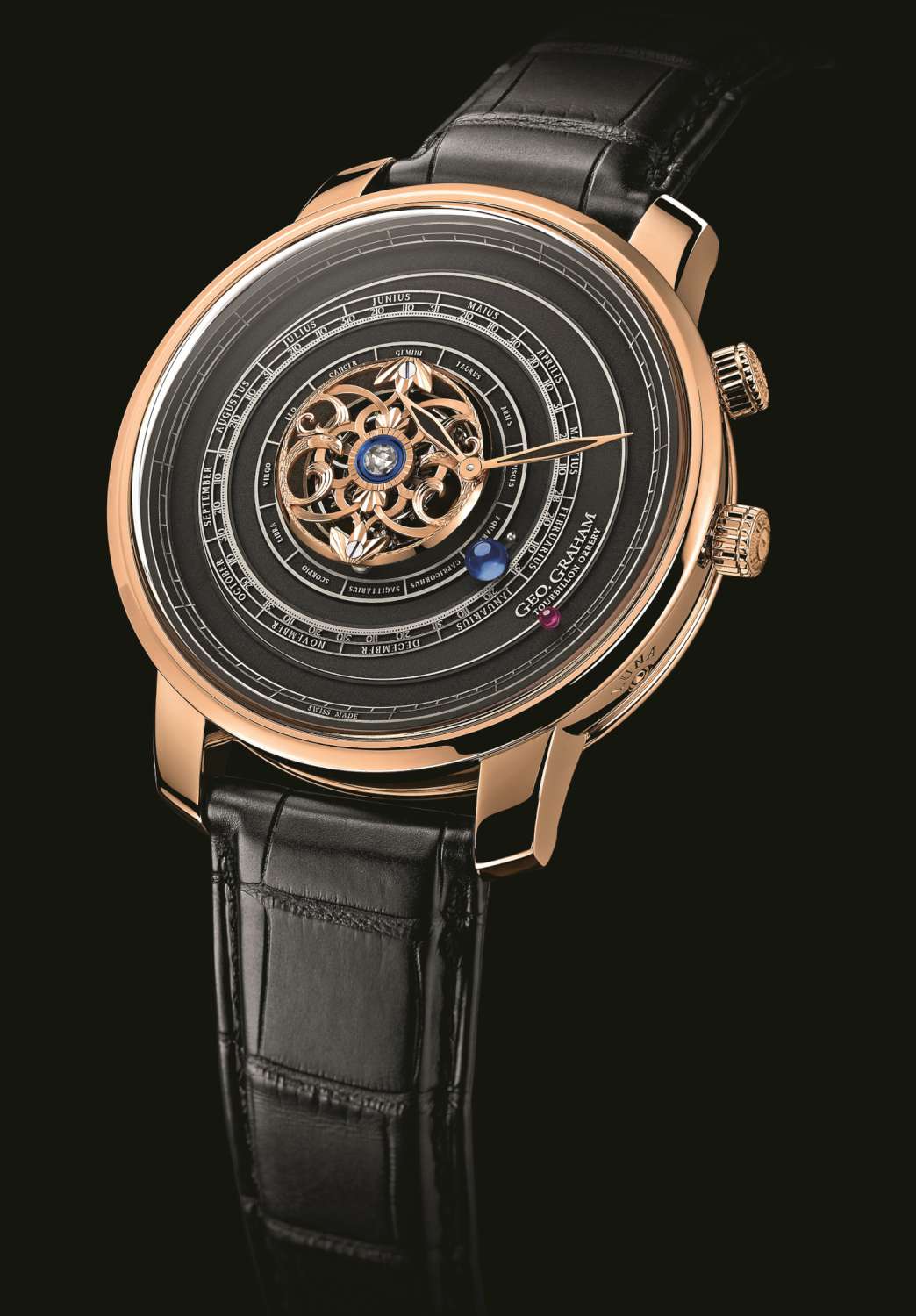 This watch was important for Graham because it established the link between the modern-day company and the work of George Graham himself, rather like what Arnold & Son have done with their dead beat seconds watches. But in my opinion, the Geo. Graham Tourbillon Orrery is an important piece because it expresses the way in which the general public are beginning to think of our planet not as our home, but as a springboard, the place that we have to move away from. And this piece shows the Earth, the moon, and Mars, which are precisely the places where we can conceivably go with our level of science. From this point of view, it is different from the conceptually similar Midnight Planétarium by Van Cleef & Arpels, presented the year after the Tourbillon Orrery. To come back to the numerology again, the three-hundred-year periodicity built into this watch approximates to the development of our scientific age, the age in which people started looking at the planets and stars using the first telescopes and beginning the long path of thinking how to get there. By way of contrast, the previous 300 years – 1395-1695 – correspond roughly to the age of the Renaissance and the flowering of the arts. Today, we’ve been to the moon, and NASA and Elon Musk’s Space-X are thinking of Mars, and likewise filmmakers such as Ridley Scott. Perhaps before the first hundred-year caseback disc has run out, this watch will be on the wrist of someone living up there on the red planet, and its little blue sphere expresses the nostalgia with which he thinks of the place that he came from. 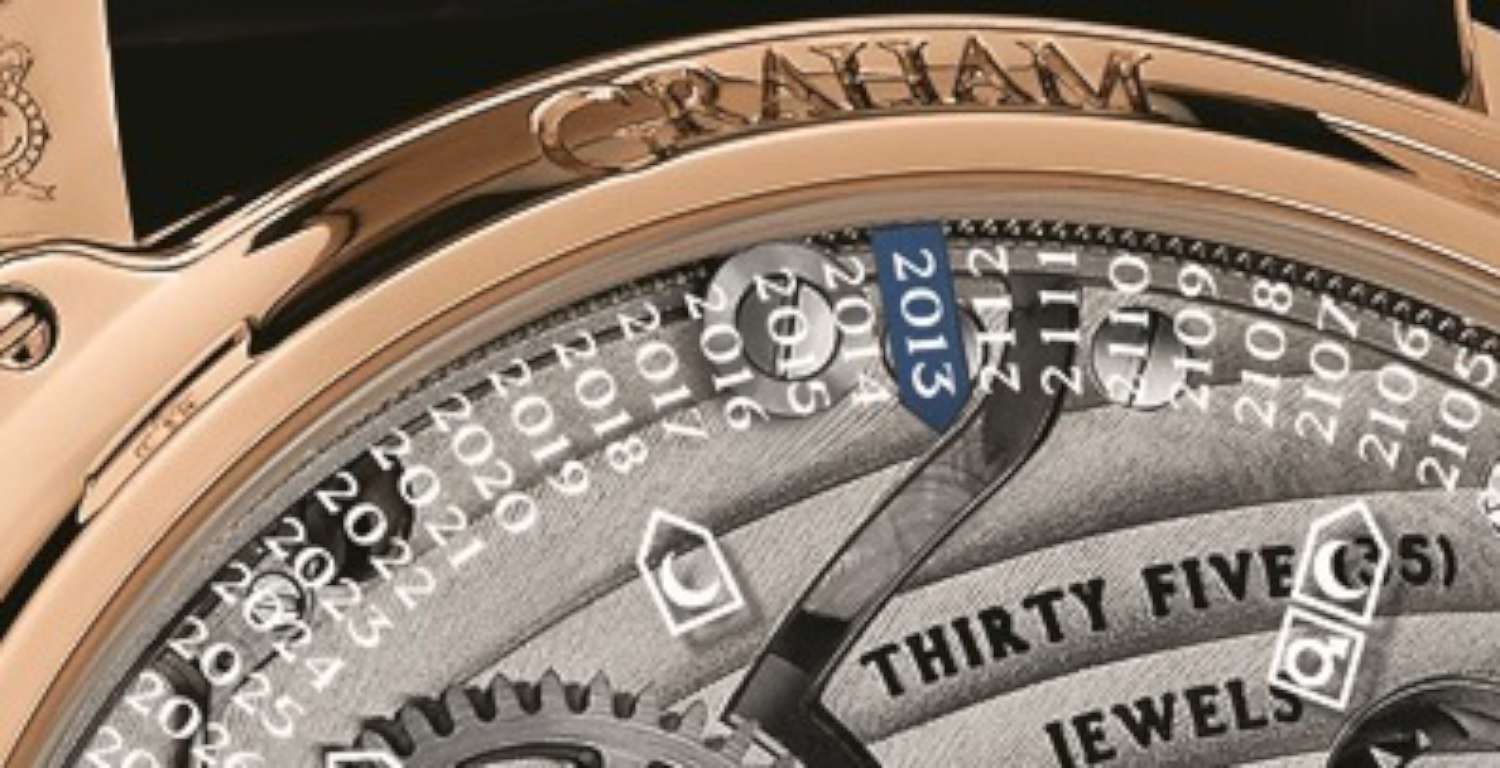 Below, the original Orrery by George Graham: 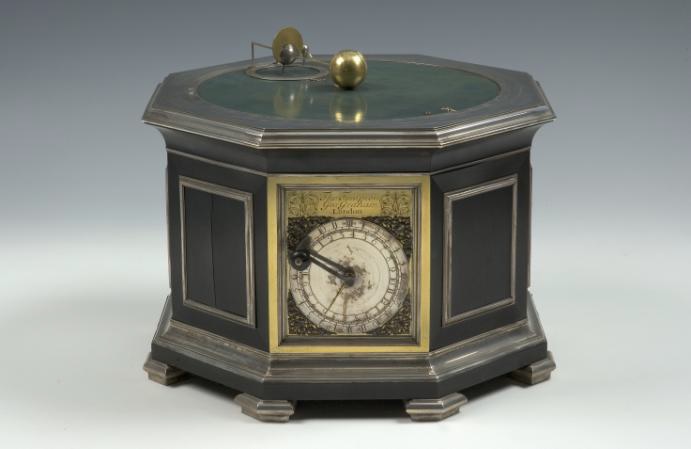