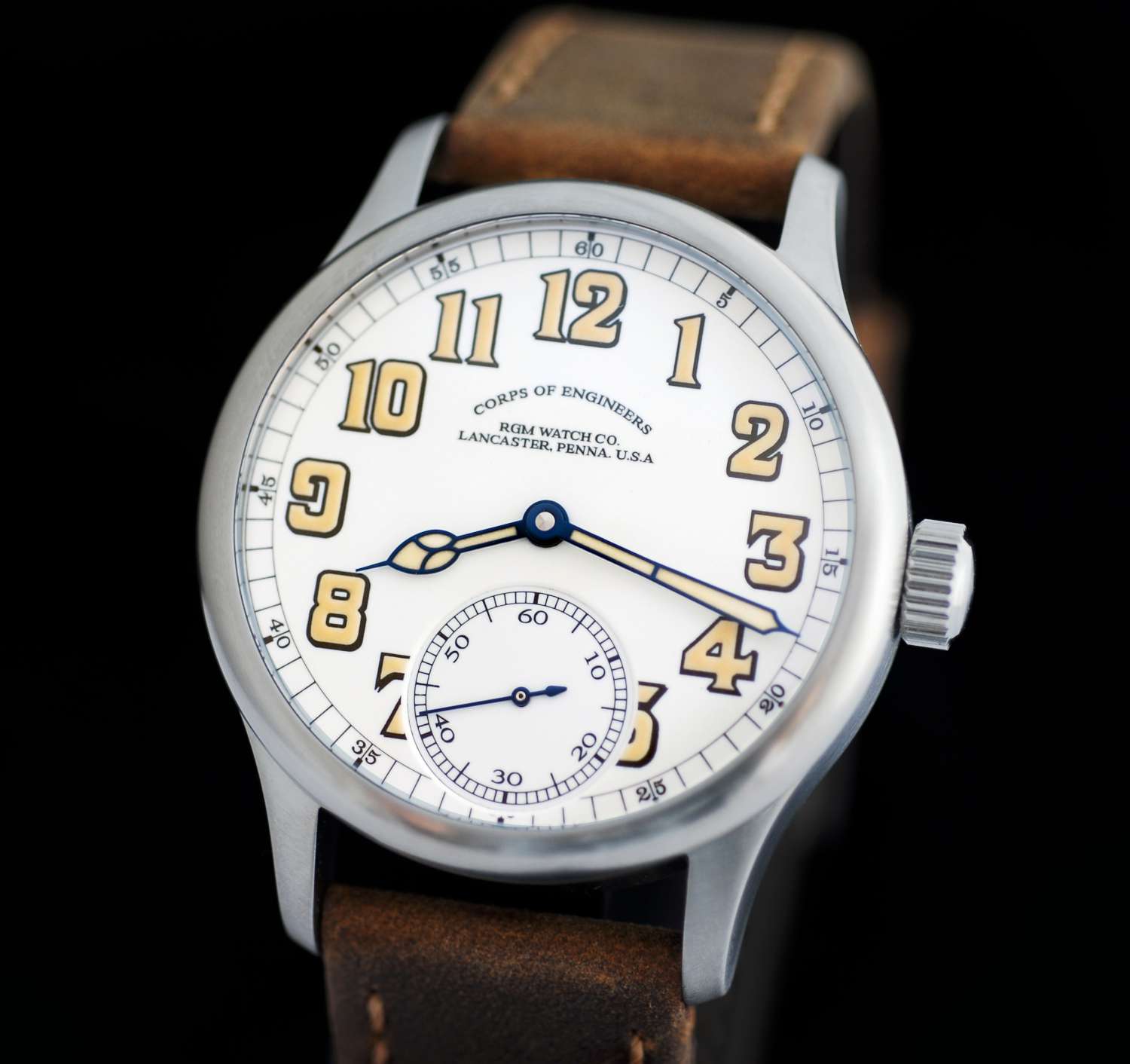 You can’t help asking why Hamilton doesn’t make a watch like this. The RGM 801-COE Corps of Engineers is an evocative piece recalling the railroad pocket watches of America in the early 20th century, with the dial design that then became a feature of military watches in World War I. And it is based on Hamilton originals. This watch by RGM has been entered into the Grand Prix d’Horlogerie de Genève (GPHG) 2015.

When the United States entered the First World War in April 1917, their U.S. Army Corps of Engineers brought a thousand Hamilton railroad watches with them. Not surprising, because the engineers had mostly been recruited from the private railway companies, and the U.S. Army Corps had adopted the General Railroad Timepiece Standards of 1893 (this specified the required characteristics of the pocket watches they used, such as “open faced, keep time accurately to within a gain or loss of only 30 seconds a week, use plain Arabic numbers printed bold and black on a white dial, and have bold black hands.”). Later, they bought similar watches from several Swiss companies with a similar design, and the same essential functions: legibility, easy winding, and accuracy to within 30 seconds a week.

The pilot-style case is in 316L stainless steel, 42 mm in diameter and 10.5 mm thick, water resistance 50 metres. Like the original WWI watches, this piece has a grand feu enamel dial, providing the perfect backgound for the Art Deco style numerals with lots of luminescent SuperLuminova. The hands are in the style of watches from the same period, and likewise the winding crown. The leather strap has a vintage finish and a pin buckle; it is also available with a stainless steel bracelet.

The manually-wound movement is RGM’s American 801 calibre, made in-house, and, like the dial, it is inspired by historical American watches. In particular, the bridges are based on the Keystone Howard Watch Company’s “Edward Howard” model, a high-level watch at the time. The sapphire caseback reveals the fine finish of the movement. It runs at 18,000 vph (2.5 Hertz), and has a power reserve of 44 hours. 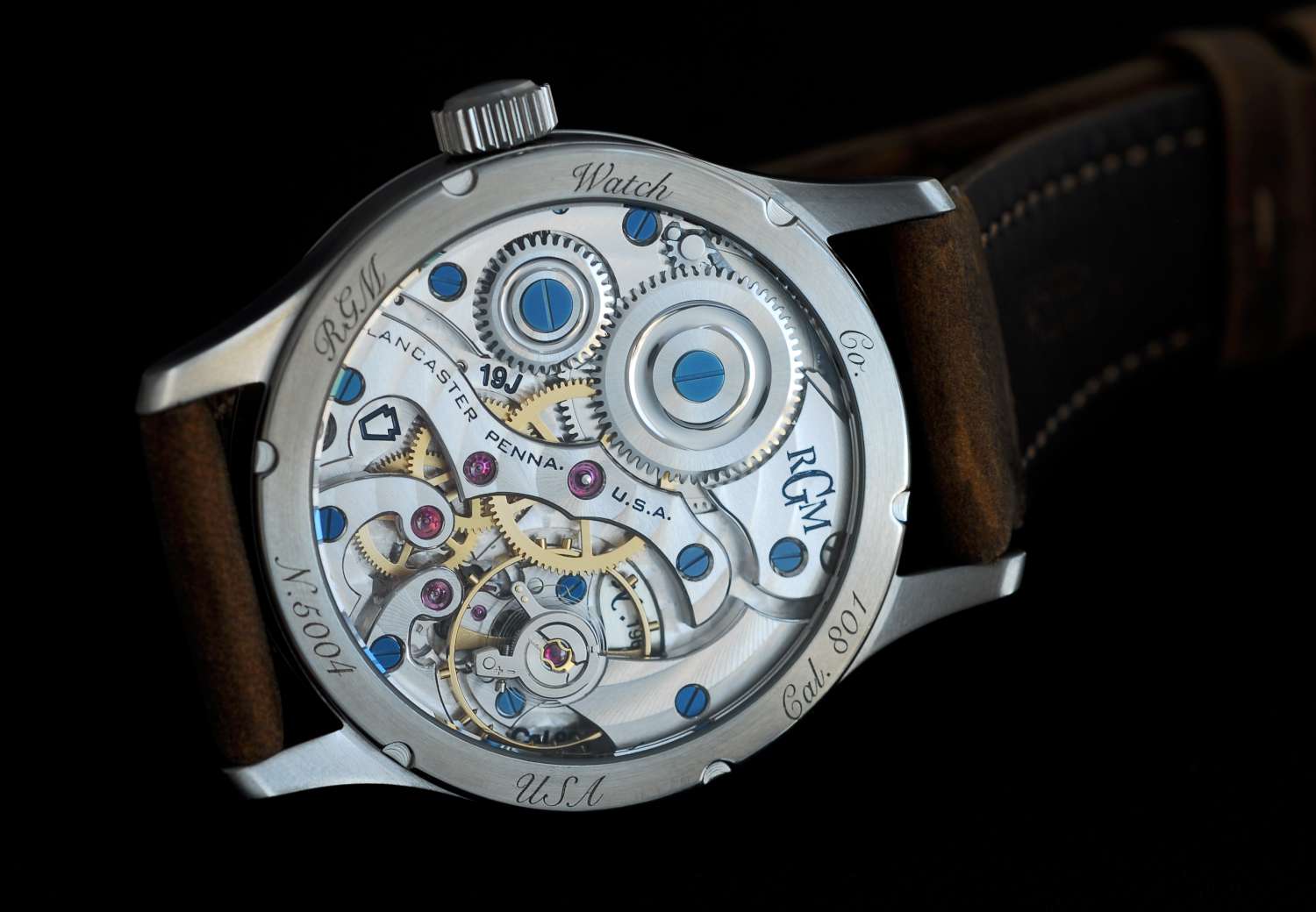 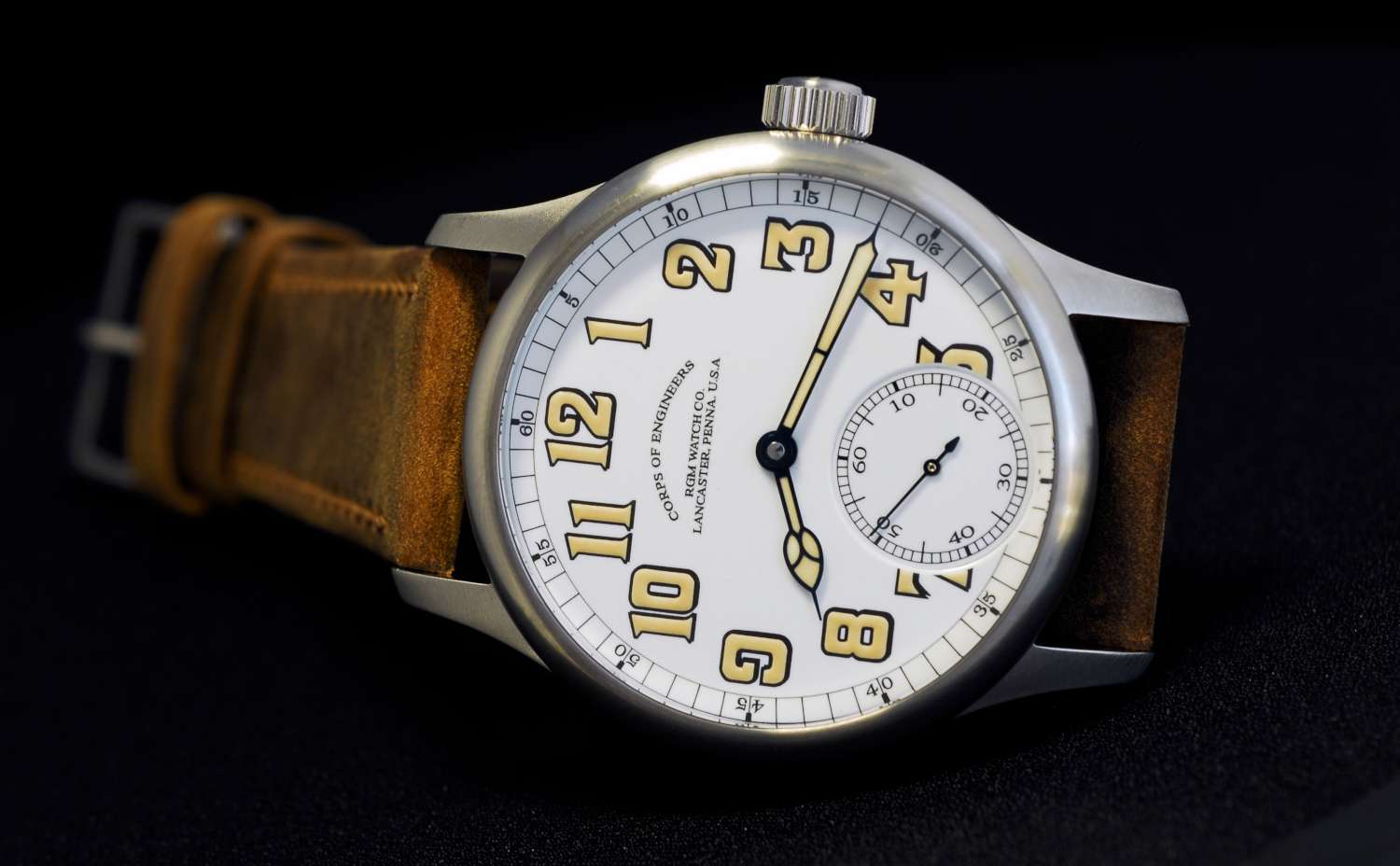 The watch can be ordered with some extra features. The option stop-second function (which stops the balance and the second hand when the crown is pulled into the time-setting position) costs an extra US$ 1,250. 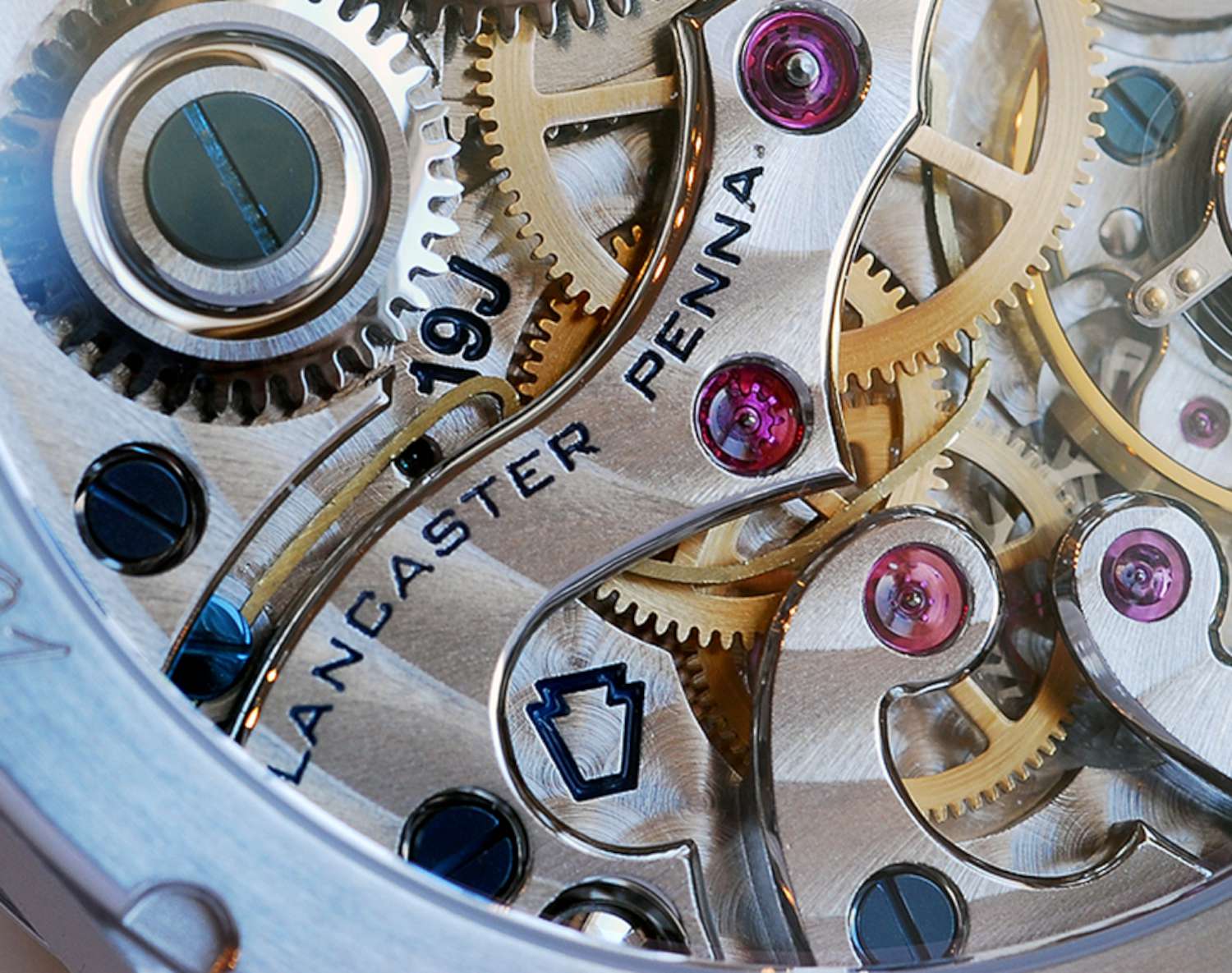 The watch can be supplied with wolf’s tooth winding wheels, a design that was used in high-grade watches of the time, such as the Howard “Edward Howard” model. This costs an extra US$ 850. 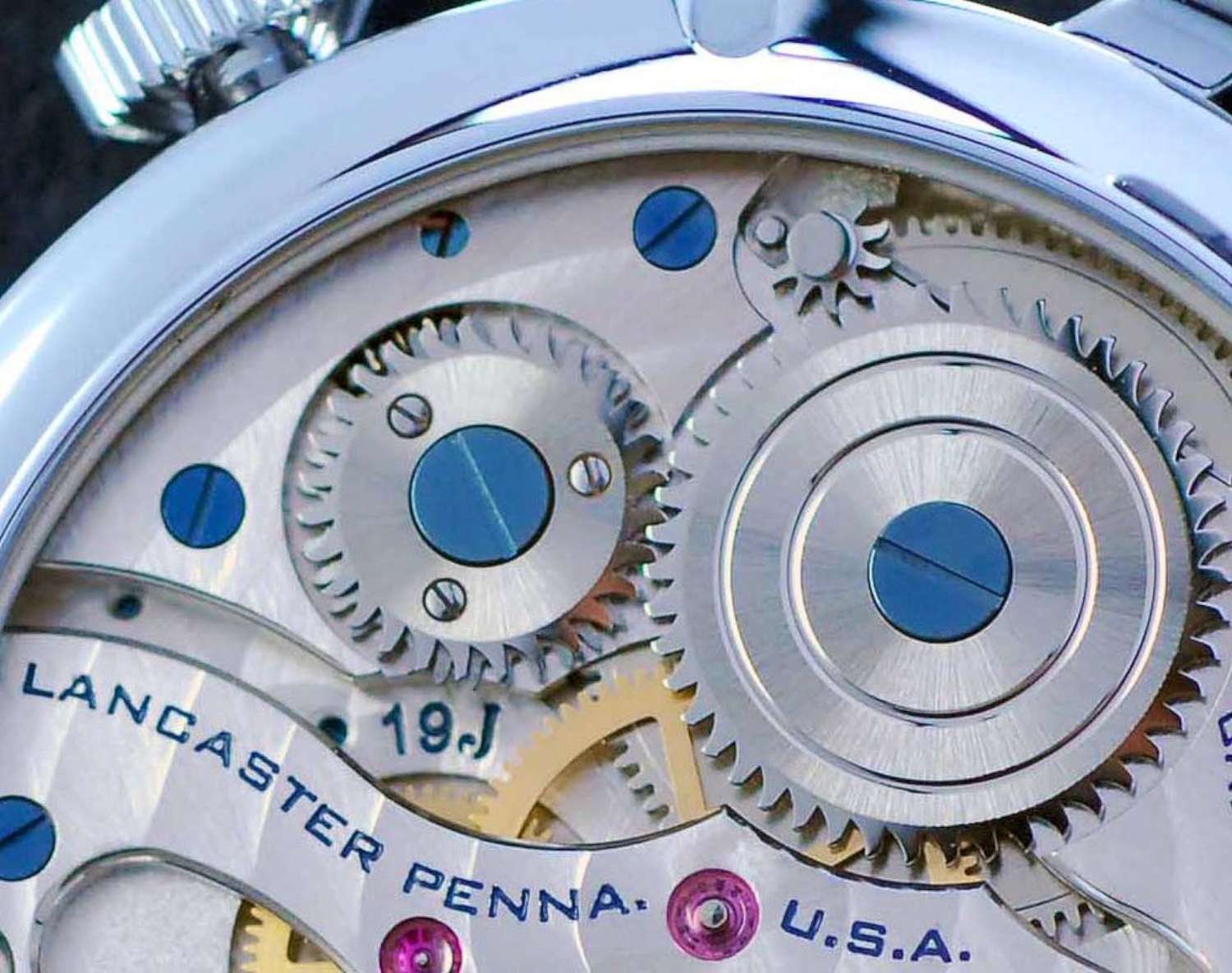 The balance bridge can be embellished with a few initials or a small logo. This costs an extra US$ 850. 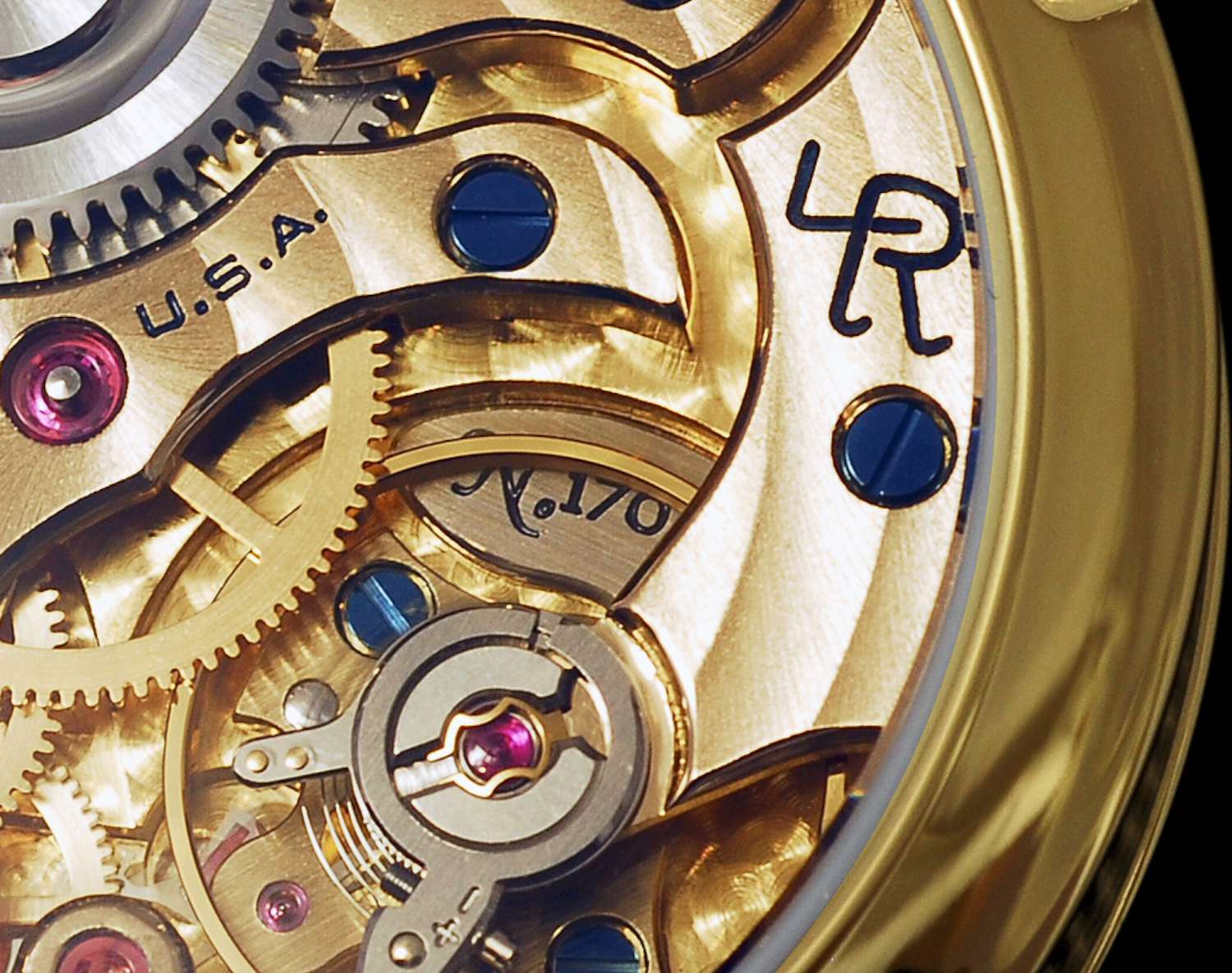