Crown used to set all time and date functions 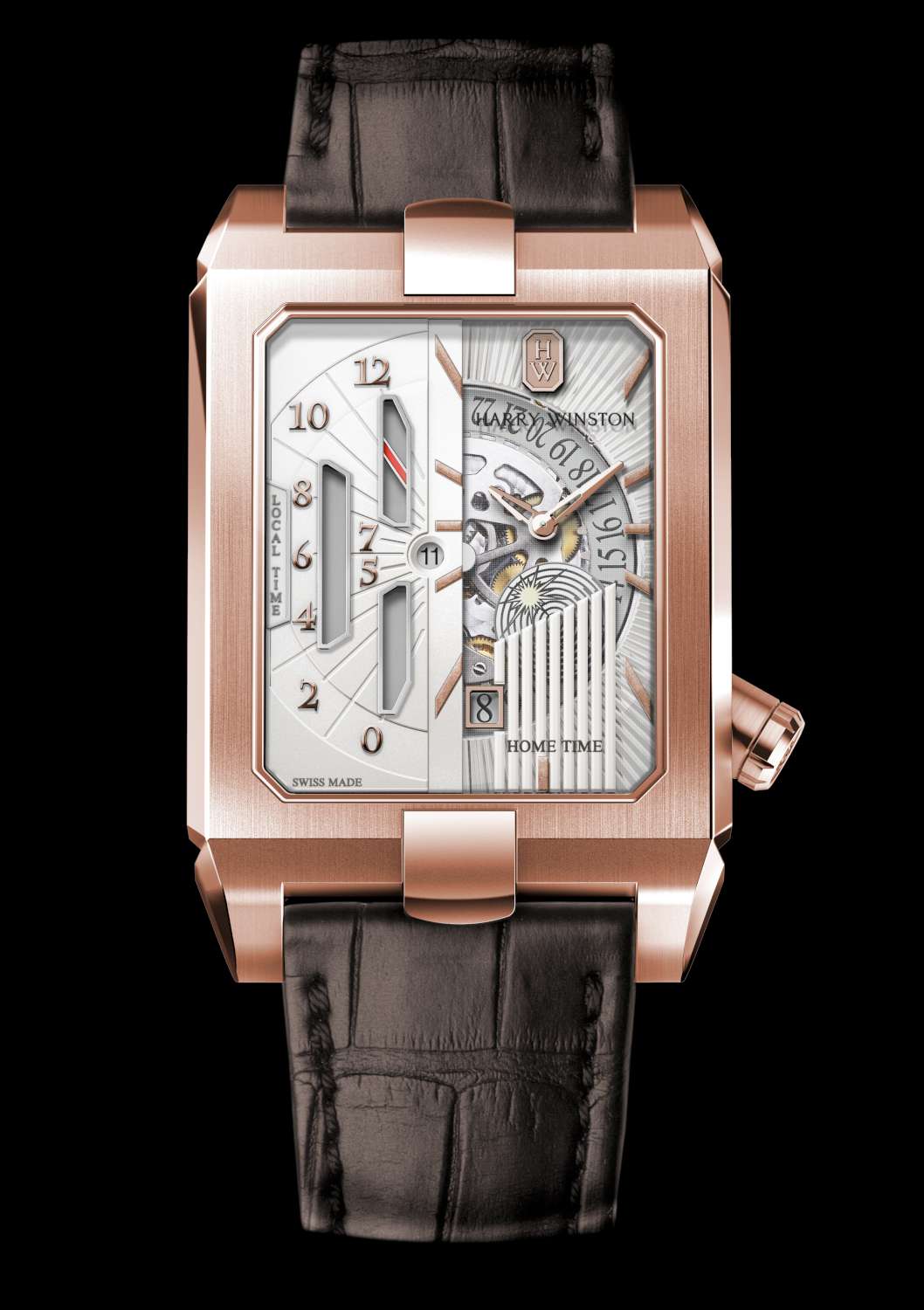 This piece by Harry Winston is a dual time zone watch with a very unusual design. Large and rectangular, it has a dial divided into two halves, the main time zone on the right, with analogue hour and minute hands, a day/night indicator, and a date window. On the left, there is the second time zone, with a retrograde display marking the hours, and a small circular window showing the same time digitally. I don’t know if there are watchmaking conventions on the difference between home time and local time and how they are displayed, but I must say I’m a bit puzzled by the arrangement of this piece. If I’m travelling, I would expect the local time to be where I am now, and the home time to be where I live for most of the time. And so in this watch, I would have expected the conventional two-hand hour and minute display for the local time, and the hour-only display for home time. Harry Winston seem to have inverted this, and they show local time with the hour-only retrograde display, and home time with the two hands. I guess you can use the watch as you wish, but I’m not 100% clear as to its logic. The watch demonstrates that after its acquisition by Swatch Group, Harry Winston have lost none of their originality in design, and they have acquired a lot, such as the possibility of using Sedna gold (an Omega rose gold) in addition to the brand’s own Zalium alloy, and Blancpain’s movements.

The heart of the watch is the same as the Project Z8 Dual Time presented last year. The movement is the same, HW3502, and the functions are also analogous. What has been changed is the design, with the use of the classic rectangular case, with its striking vertical grooves on the case side, visually separating the lugs from the case.

It’s a large piece at 53.8 x 35.8 mm, thickness 10.7 mm (water resistance 30 metres), but it has a curving caseback and sloping lugs making it more comfortable to wear, following the curve of the wrist. The classic Harry Winston identity can be seen in the emerald-cut shape of the case and the single “arch” top and bottom, a reference to the portal of the brand’s Fifth Avenue boutique. The two halves of the dial are separated visually by their very different appearance, and they are also on two levels. The second time zone on the left is higher, with a red hand that appears in three vertical slits, returning back to 0 after it has reached 12 (retrograde movement). The crown is unusually positioned at an angle, and it is used to control all time indications, conventionally for the main time zone and date on the right hand side of the dial, and a little differently for the second time zone. When you pull out the crown to the setting position for the time zone on the left hand side of the dial, the red hand disappears, and you can set the time by watching the number in the circular window. The red hand reappears when you push the crown back in. 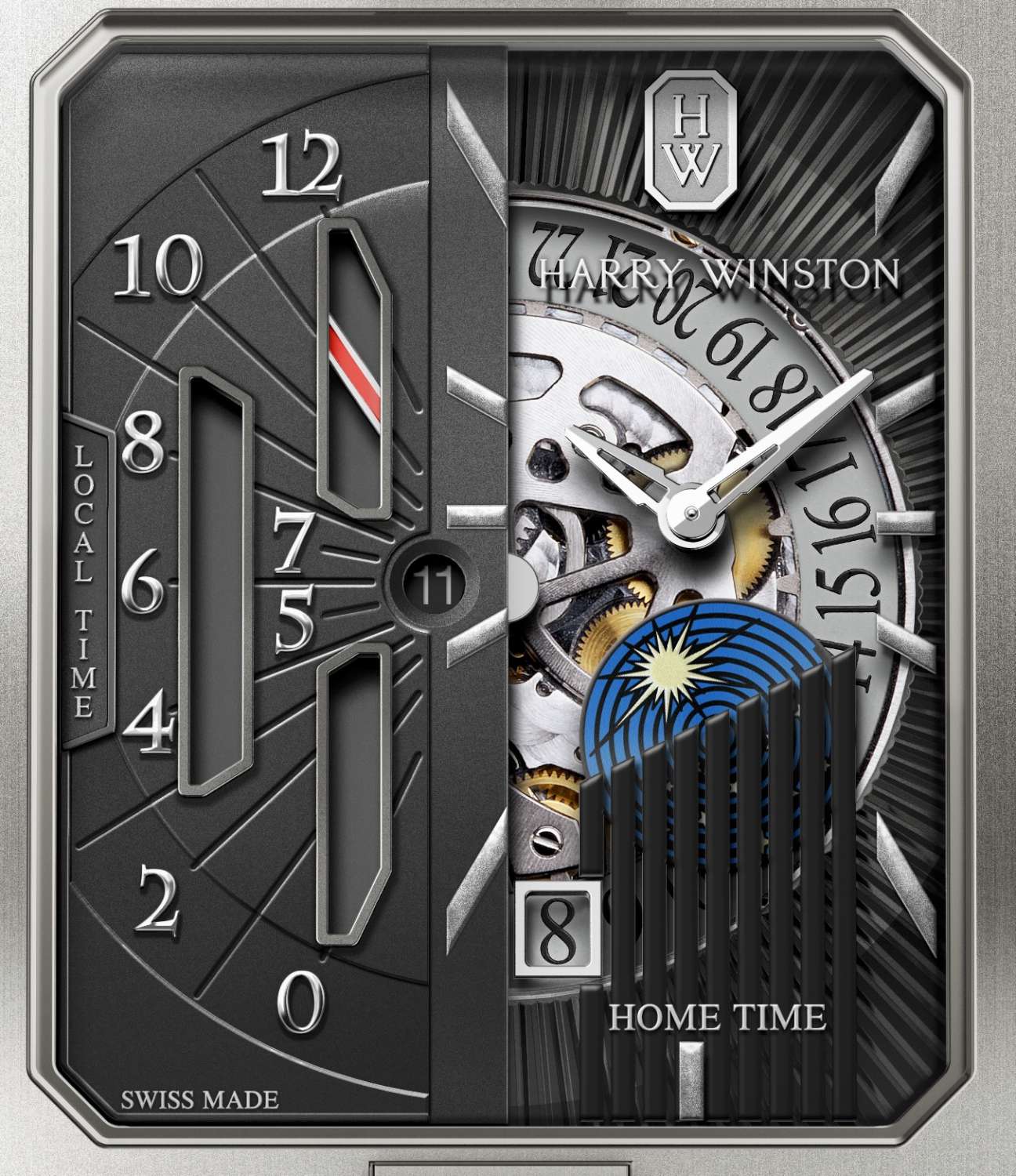 The watch is powered by the HW3502 movement, with 281 components, running at 28,800 vph (4 Hertz). It has a silicon balance spring for good anti-magnetic characteristics, and the movement is finely finished with an oscillating weight in white gold, Côtes de Genève, circular graining and chamfered bridges, visible through the sapphire caseback. Calibre HW3502 is based on Blancpain’s calibre 1150. In actual fact, the movement was originally the Frédéric Piguet 1150: the historic movement-manufacturer Frédéric Piguet purchased Blancpain in 1982, and then Piguet-Blancpain was itself subsequently purchased by Swatch Group. 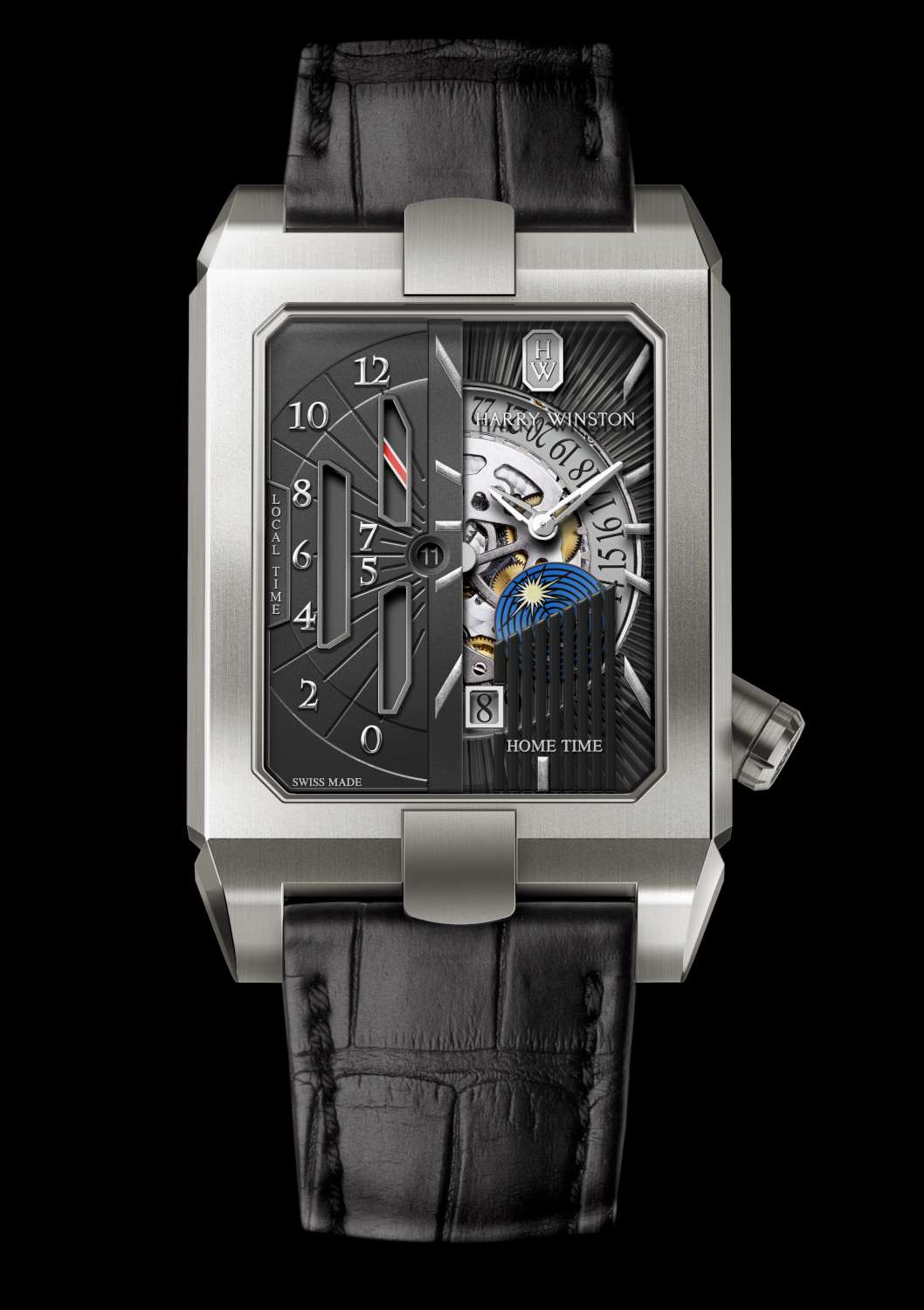