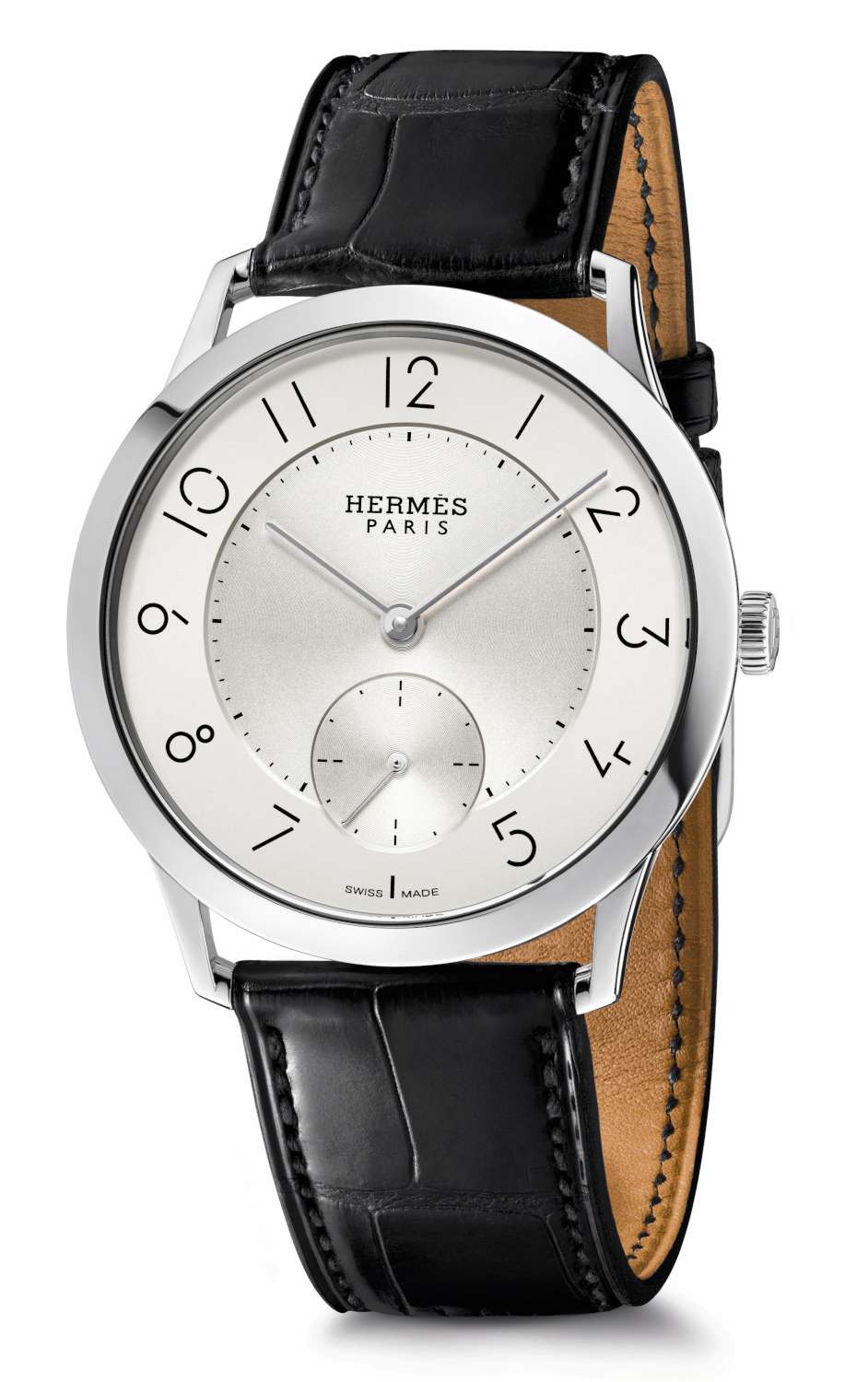 The Slim d’Hermès project began in 2012 and it represents a quest on the part of La Montre d’Hermès to pare a watch down to the essentials. Designed by creative director Philippe Delhotal, all the Slim watches feature a new typeface by Philippe Apeloig, a designer who had already worked for Hermès but who knew nothing of watches and was therefore able to contribute a fresh, unprejudiced approach. The resulting digits are built of simple building blocks – curves, circles, straight lines – and they are legible at all sizes. In the photo below, Slim 39.5 mm in rose gold, with havana alligator strap, photo by Calitho, courtesy of Hermès. 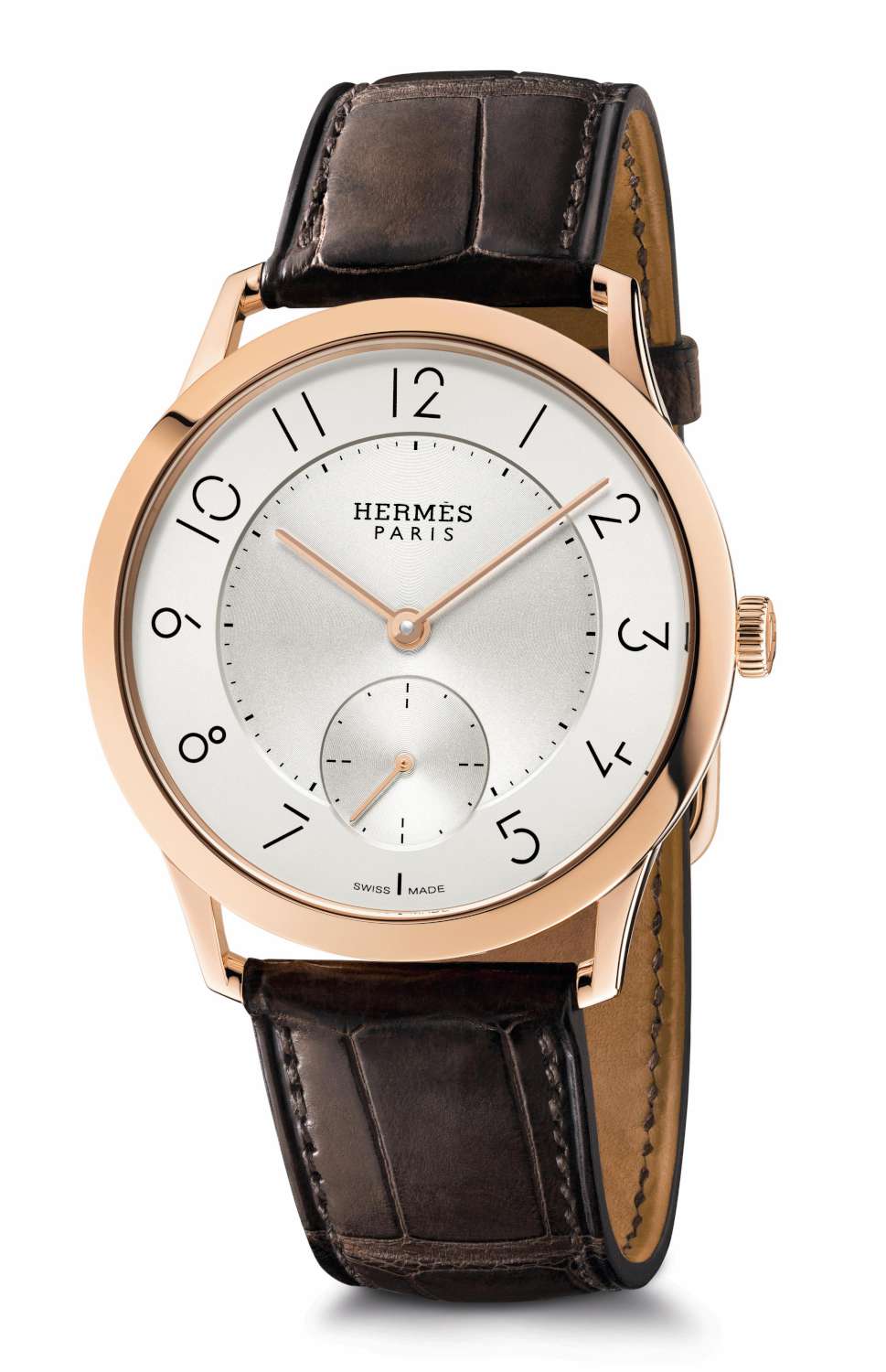 The 39.5 mm watch is powered by the ultra-thin H1950 movement (2.6 mm thick) by Manufacture Vaucher, and as Hermès hold a 25% share of Vaucher, it can be considered an in-house movement. Its reduced size is made possible in part by the micro-rotor. The calibre is self-winding, running at 3 Hertz (21,600 vph), with a power reserve of 42 hours. The sapphire caseback reveals the lovely finish with the “sprinkling of Hs” motifs instead of the usual Côtes de Genève stripes. In the Perpetual Calendar version, an additional module is added to the H1950 calibre. The watch is available in steel or rose gold. The steel version is priced at 6,900 Swiss francs, the rose gold version 16,500 Swiss francs. In the photo below, the H1950 movement, photo by Claude Joray, courtesy of Hermès. 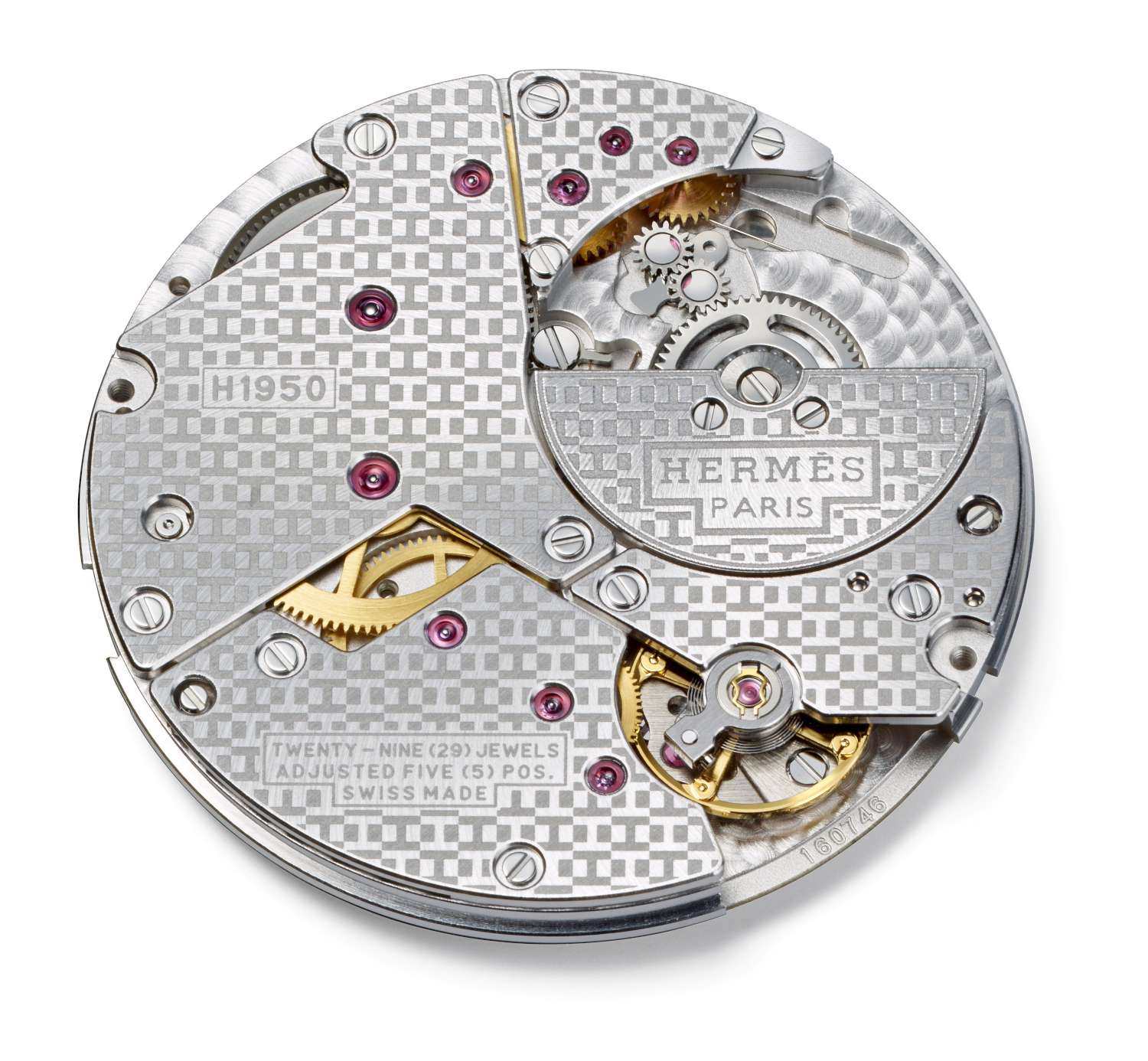 Below, caseback of the Slim 39.5 mm in rose gold, with havana alligator strap, photo by Claude Joray, courtesy of Hermès. 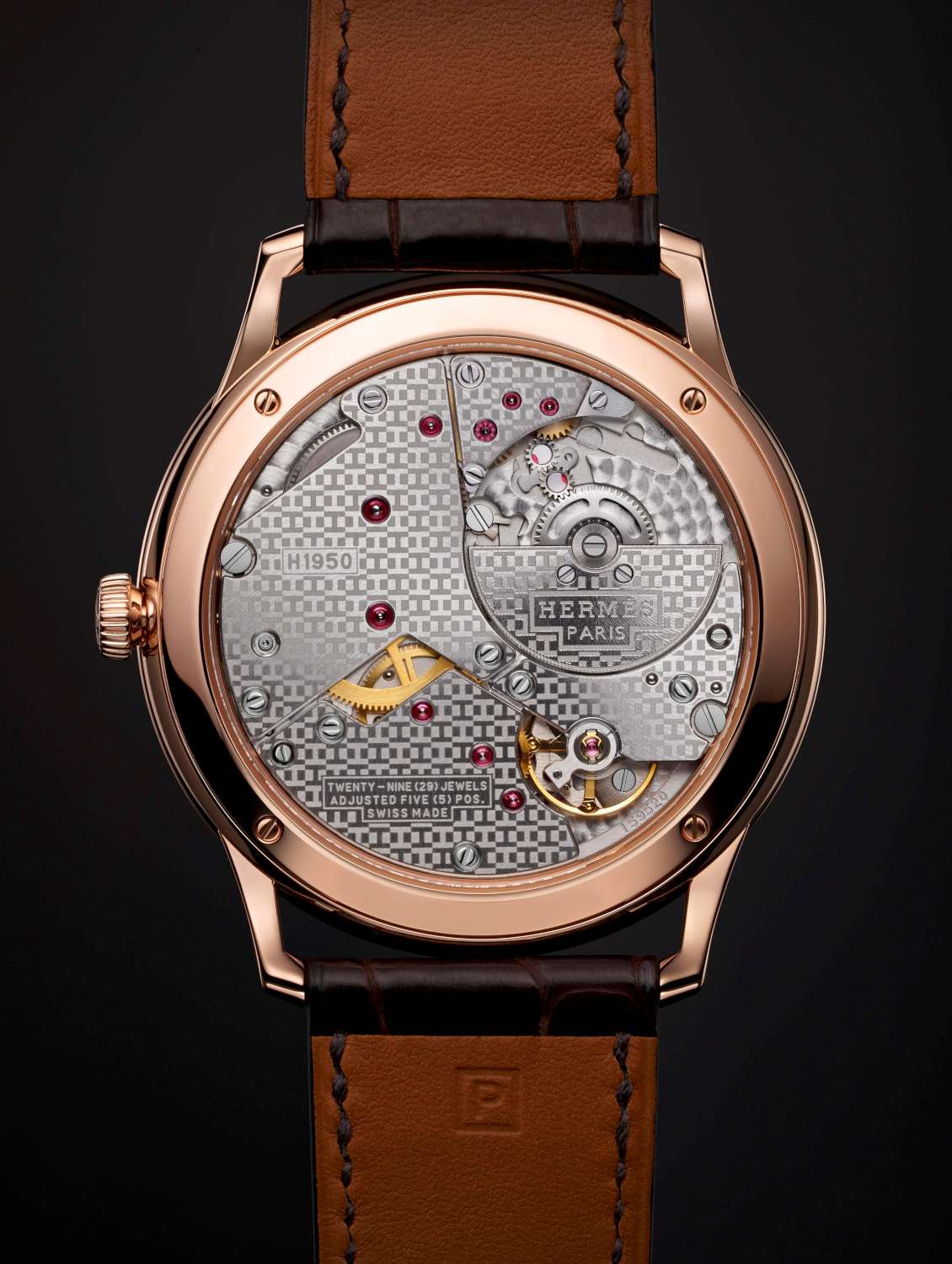 Slim d’Hermès is also made in 32 and 25 mm models, the latter aimed principally at the Asian market. Both these sizes are powered by quartz movements, and the watches feature a wide range of straps in colours such as blackcurrant, sapphire blue, ember, Etruscan, grey and violet. The 32 and 25 mm watches are available in steel or rose gold, with or without diamond setting. The solid caseback is marked with the brand’s ex-libris motif. These watches are priced from 2,800 Swiss francs upwards.

In the photos below, Slim d’Hermès in some of the 32 mm versions, photos by Calitho, courtesy of Hermès. 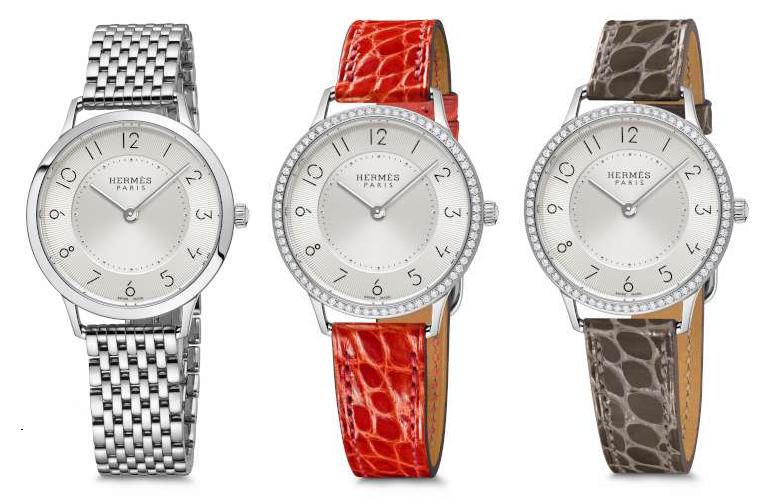 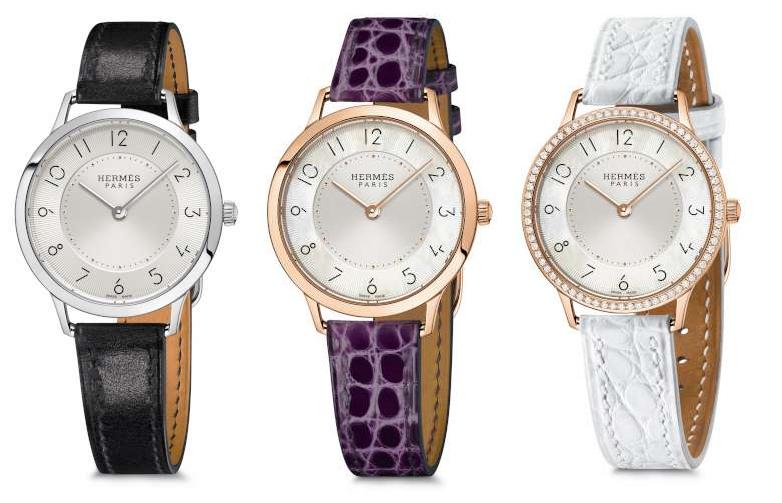 In the photos below, Slim d’Hermès in two of the 25 mm versions, photos by Calitho, courtesy of Hermès. 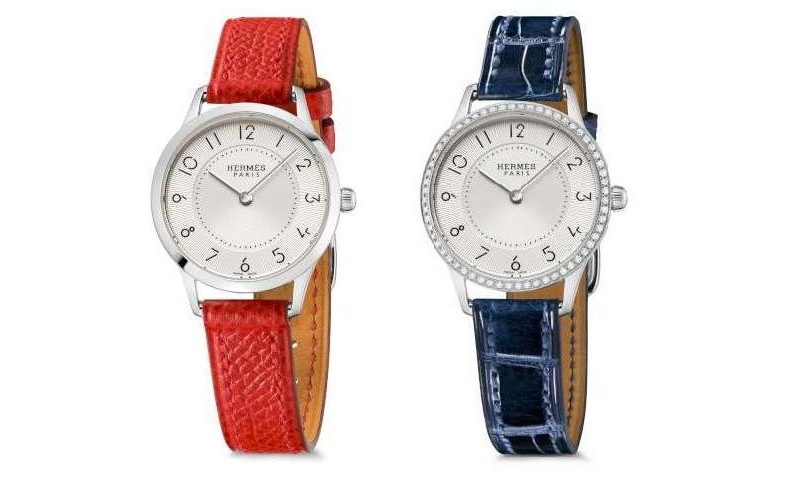