Four windows on the caseband providing views of the movement

Wheel for the direct-drive seconds hand

Power reserve, 53 hours, shown on a scale engraved on the mainplate, hand in blued gold

Ferdinand Berthoud FB1 Chronometer, reference FB 1.1, made in two series, each of 50 watches, one in white gold and titanium, one in rose gold and black ceramic

Chronométrie Ferdinand Berthoud is a new brand owned by Chopard, whose Co-President Karl-Friedrich Scheufele acquired the right to use the name in 2006. Like other analogous relaunches of watchmakers of the past, such as Arnold & Son and Graham, Ferdinand Berthoud is not just a way of purchasing a chunk of watchmaking history: it reflects the desire to highlight the work of an important figure in classical watchmaking. The first watch created for the new brand, the FB 1 Chronometer, is derived from the work of Berthoud, featuring a complex constant-power movement with fusée-and-chain transmission. As Karl-Friedrich Scheufele, who is also President of the new company, said, “We have sought to transpose what Ferdinand Berthoud might have created if he was living now.” Though part of Chopard, the new brand and the new watch are the fruit of an independent, dedicated team, and the watches will be distributed internationally through independent points of sale.

Ferdinand Berthoud was born in 1727 in Val-de-Travers, now part of the Swiss canton of Neuchâtel, and he became a clockmaker and Master Horologist in Paris in 1753. One of his early pieces was described as “a longcase equation clock with concentric seconds marking the months and days of the month, leap years, and which runs for 13 months without being wound.” He went on to build marine chronometers, essential instruments for navigation in the age of exploration. His work gradually developed more into pure research than practical watchmaking: he wrote material for Diderot’s Encyclopédie méthodique, published a two-volume treatise on watchmaking, and in 1764 he was elected to the Royal Society in London by virtue of his specialist writings. In 1770 he became Horologist-mechanic to the King of France and the Navy, and received a commission for 20 marine chronometers. His work Histoire de la mesure du temps par les horloges, published in 1802, was his swan song: he died in 1807, and his work was continued by two nephews into the late 19th century. But watchmakers like Berthoud, Breguet, Harrison, Jaquet-Droz and Arnold are like comets in the night sky of time, and the name all but disappeared, until its current revival. Original timepieces by Berthoud are conserved at the Musée des arts et métiers, an industrial design museum at 60 Rue Réaumur, Paris, and the Marine Clock M.M. no. 6 dated 1777 (shown in the photo below), at the L.U.CEUM museum in Fleurier, also part of the Chopard Group. 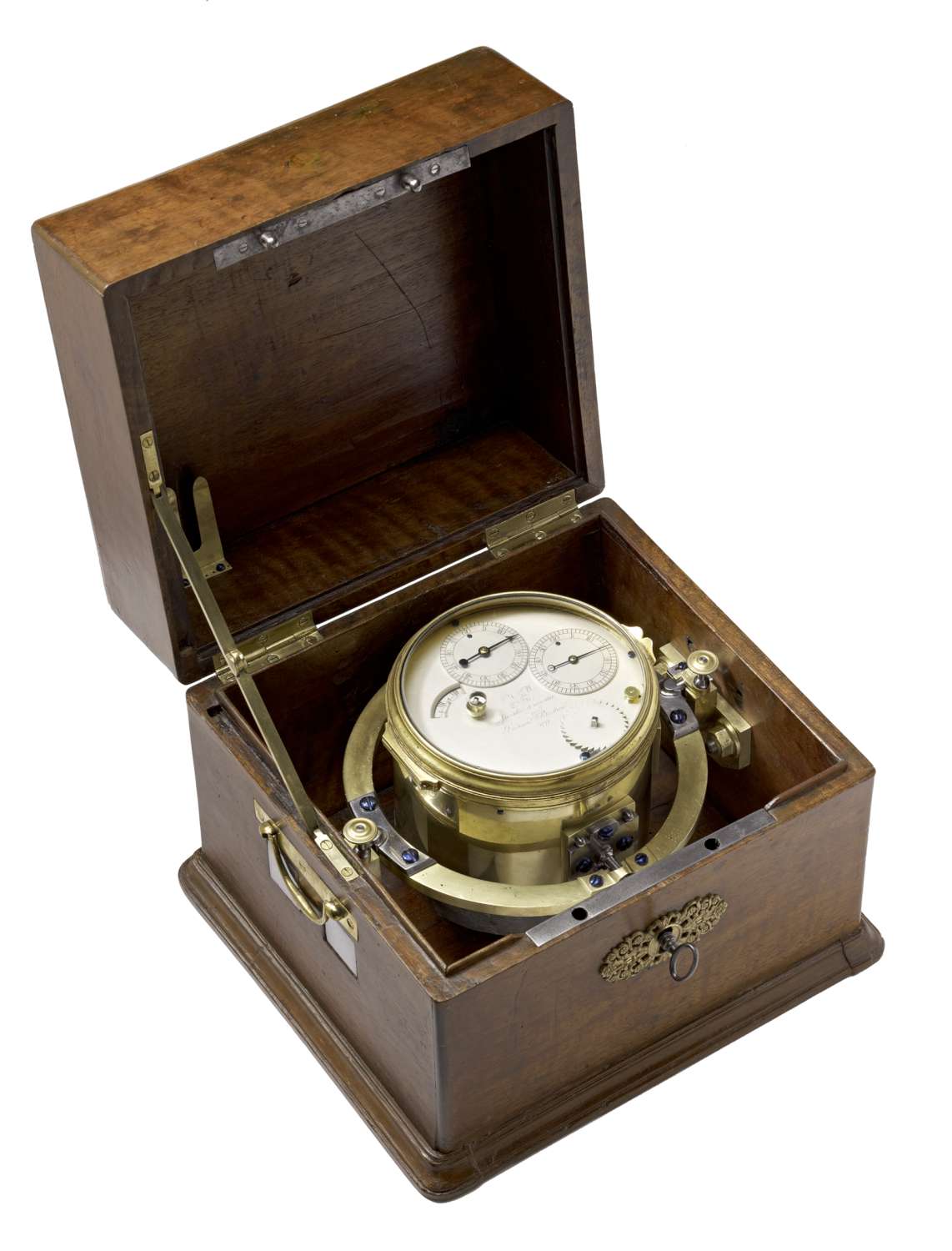 The Ferdinand Berthoud FB 1 was inspired by the historic pieces made by Berthoud himself, with an in-house hand-wound movement characteristic for its construction based on low pillars bearing the half-bridges, its octagonal case with four windows on the caseband providing a view of the movement, and its uncluttered lacquered dial. The seconds scale is marked on a transparent sapphire ring inside the bezel. A window reveals the balance and the wheel for the direct-drive seconds hand, and power reserve is shown on a scale engraved on the mainplate. Hour, minute and power reserve hands are in blued gold, while the seconds hand is in blued bronze. The case is in gold, 44 mm in diameter, 13 mm thick, water resistance 30 metres, with a sapphire caseback that reveals details of the tourbillon and the suspended fusée and chain. The part of the case between the lugs is in titanium for the white gold case and black ceramic for the rose gold case, and it is fastened by bolts similar to those used by Ferdinand Berthoud in his marine chronometers. The watch has a rolled-edge alligator strap with gold folding clasp. 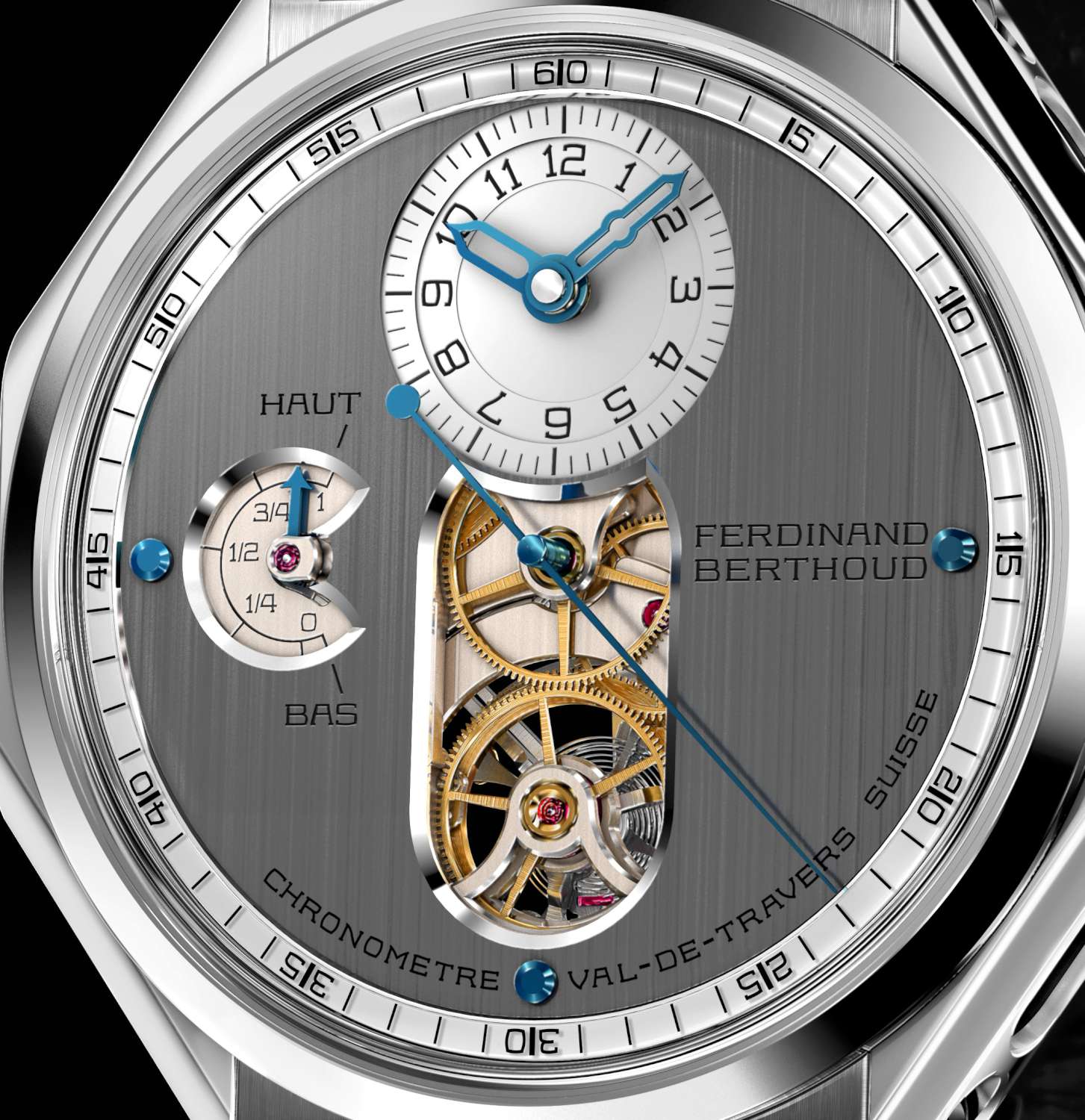 The calibre FB-T.FC tourbillon movement was designed and built in the Fleurier workshops of Chronométrie Ferdinand Berthoud. With over 1,120 components, it has an original fusée-and-chain transmission system based on Berthoud’s Marine Clock M.M. No. 6, and this provides a constant-force transmission of energy. The tourbillon has a low-frequency balance spring running at 3 Hertz (21,600 vph), with a direct-drive seconds display. The watch has a power reserve of 53 hours, displayed on the dial by means of an innovative mechanism. The watch has COSC (Swiss Official Chronometer Testing Institute) certification of accuracy.

Below, detail of the fusée-and-chain constant force transmission system:

Below, the FB-1 movement, with its characteristic pillar construction: 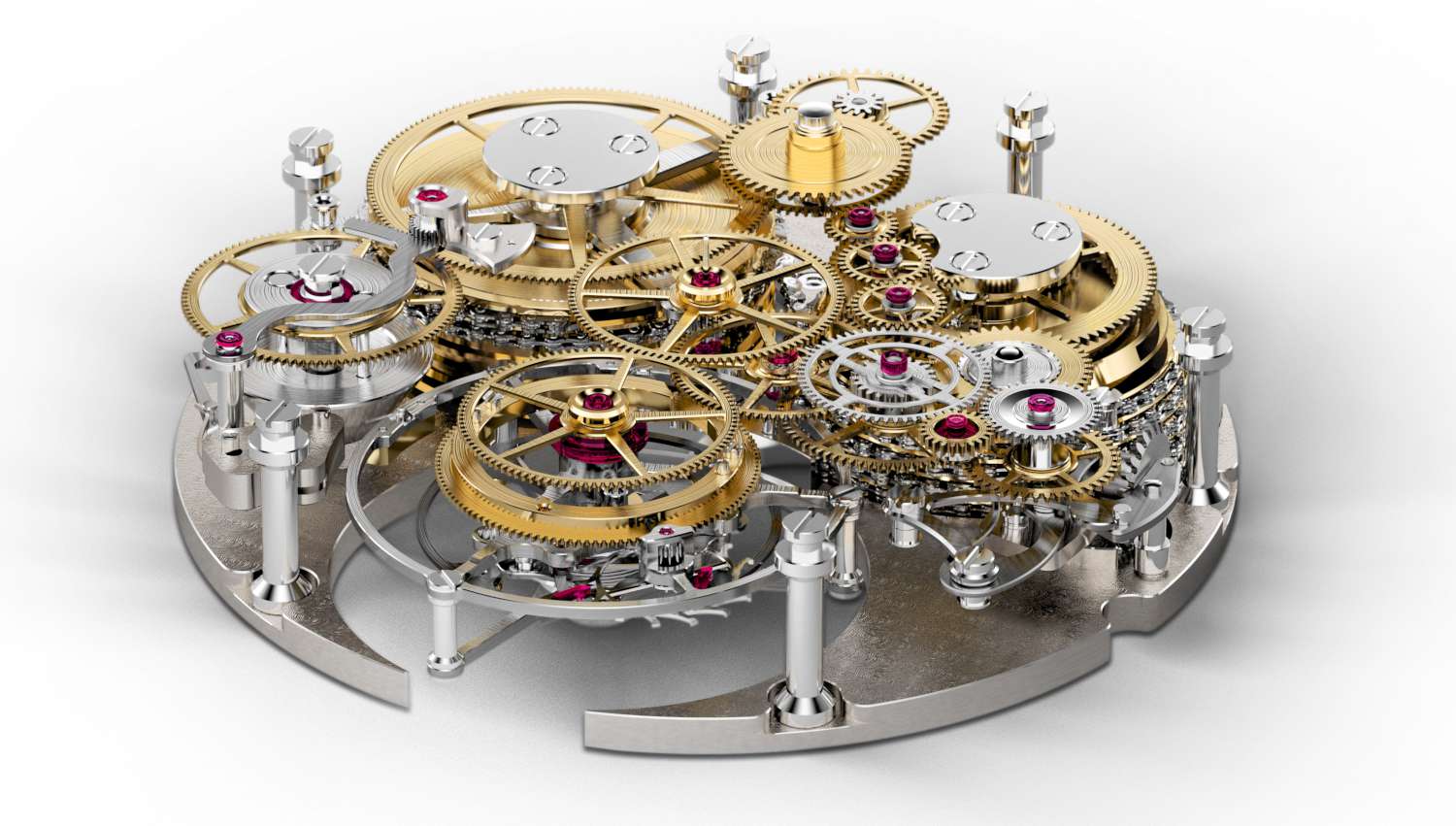 The Ferdinand Berthoud FB1 Chronometer, reference FB 1, is made in two series, each of 50 watches, one in white gold and titanium (FB 1.1), one in rose gold and black ceramic (FB 1.2). As yet (October 2015) there are no details on prices, and when the watches will become available.