M2 Chronograph 6450-03, supplied with an additional Kevlar strap, and the tools for changing the strap. Price €4,900 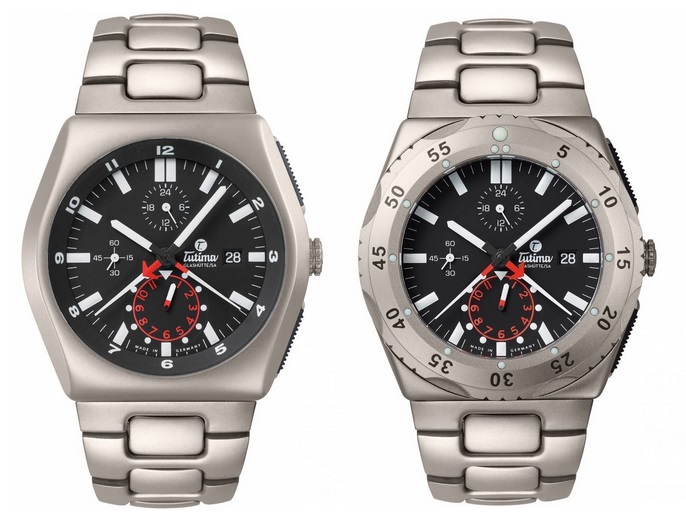 This watch was developed from the Tutima Military Chronograph, also known as the NATO, reference 798, introduced in 1984, a chronograph with centre-sweep chronograph seconds and minutes hands, and the unusual feature, for a watch of this type, of the day as well as the date. The NATO had a Lemania 5100 movement, a calibre that became legendary for its toughness, used principally for so-called tool watches by brands such as Tutima, Sinn and Fortis. The 5100 could withstand 7 G acceleration, massive shocks and blows, and it could operate perfectly for long periods – up to seven years or more – without servicing. It was based on pillar construction, in which the successive bridges and plates are mounted on short pillars instead of being fixed directly one onto another, and this made it possible to use parts with a lower degree of finish, for example components that were die-stamped, and even some parts in nylon. The 5100 was relatively thick at 8.2 mm just for the movement, but that wasn’t a problem for the military-style watches in which it was used.

The disappearance of the Lemania 5100 movement was caused by changes in ownership: Groupe Horloger Breguet purchased Nouvelle Lémania in 1992, and Nicolas G. Hayek bought Groupe Horloger Breguet for the Swatch Group in 1999. The Lémania plant in L’Orient was converted to Breguet, and even though Lemania movements were made up until about 2001, Hayek had ordered that movements made by ETA and Lemania would only be sold to Swatch Group brands. No such brand was using the 5100, and so it was subsequently discontinued. In the photo below (courtesy of Tutima), the original Tutima NATO (below) and the new M2 (above). The photo also shows another small difference between the original NATO and the new M2: the NATO had a day window next to the date, while the M2 has just a small date window at 3 o’clock: 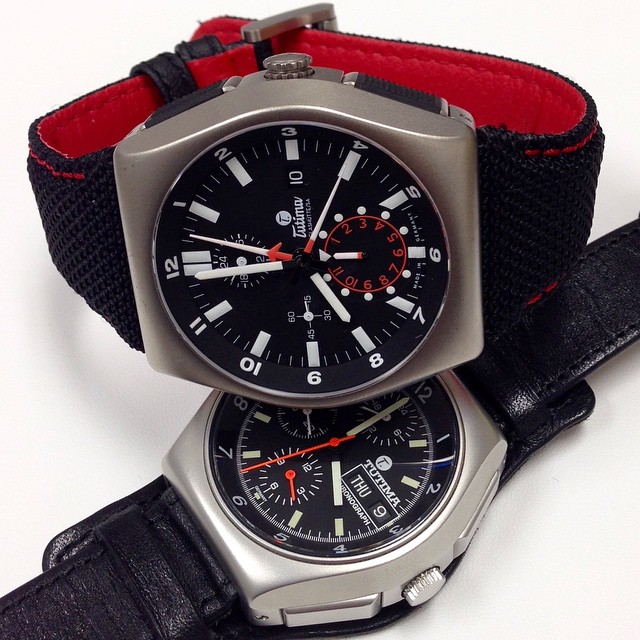 The M2 has the Tutima 521 movement, which features the same central-sweep minute and second hands that were such a practical feature of the NATO watch, far easier to read than subdials. This movement is based on the Valjoux 7750 chronograph movement (Valjoux is now part of ETA and Swatch Group). Tutima extensively modified the Valjoux 7750 to duplicate the characteristics of the Lemania 5100, with centre-sweep chronograph minutes hand. The Tutima 521 movement has a power reserve of 44 hours.

The M2 is in a large case, 46 mm in diameter and 15.5 mm thick. It has been designed to be tough, and also for smoothness, so that it doesn’t catch on clothing. The case is in bead-blasted titanium, and its lines are perfectly coordinated with the titanium bracelet that itself is spectacular for its rounded links. The movement is protected from magnetic fields by a case in soft iron and the nickel-iron alloy mu-metal. The case has a water resistance rating of 300 metres; the solid caseback is in titanium with an engraving of a biplane.

The chronograph pushers are large, sleek and functional, with a textured neoprene surface, and with a definite click when operated. The screw-down crown is small and partially recessed into the caseband, but it has a groove around it to make it easier to pull out. 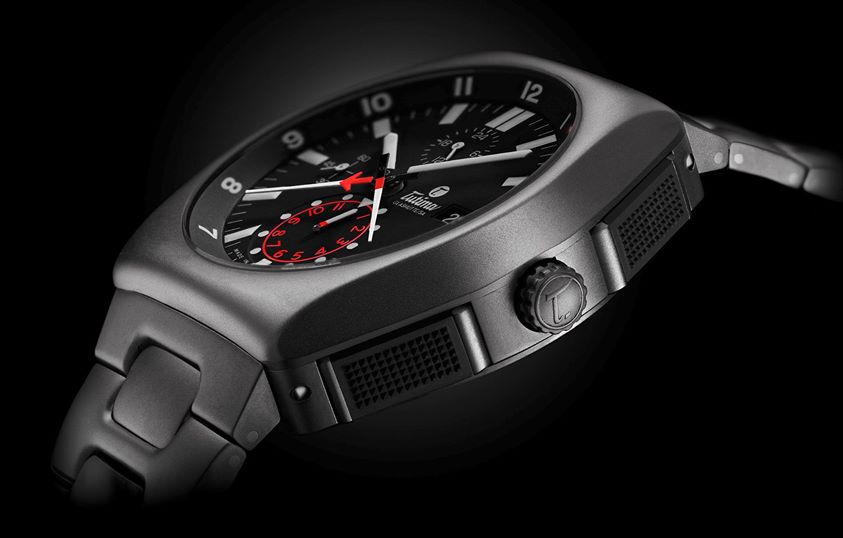 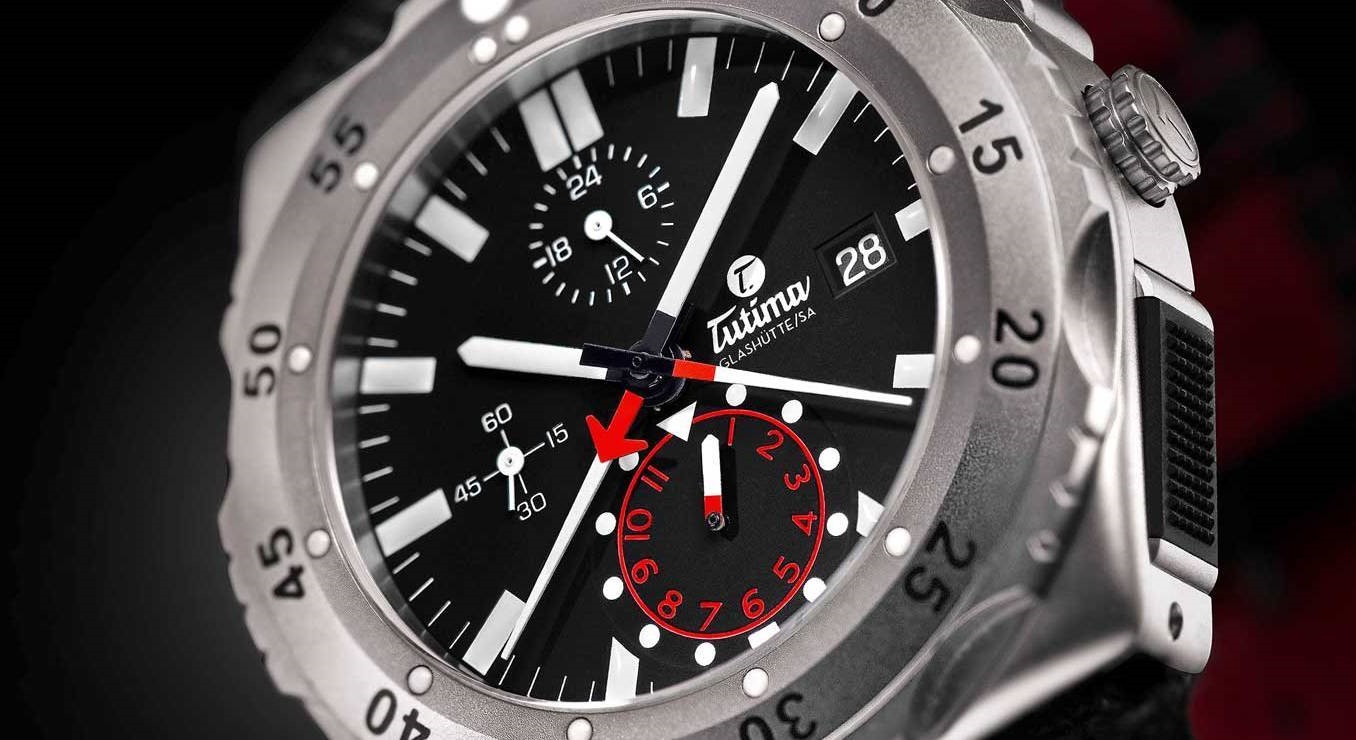 This version has a titanium bracelet with folding clasp. It is supplied with an additional Kevlar strap, together with the tools necessary for changing the strap. Price €4,900. 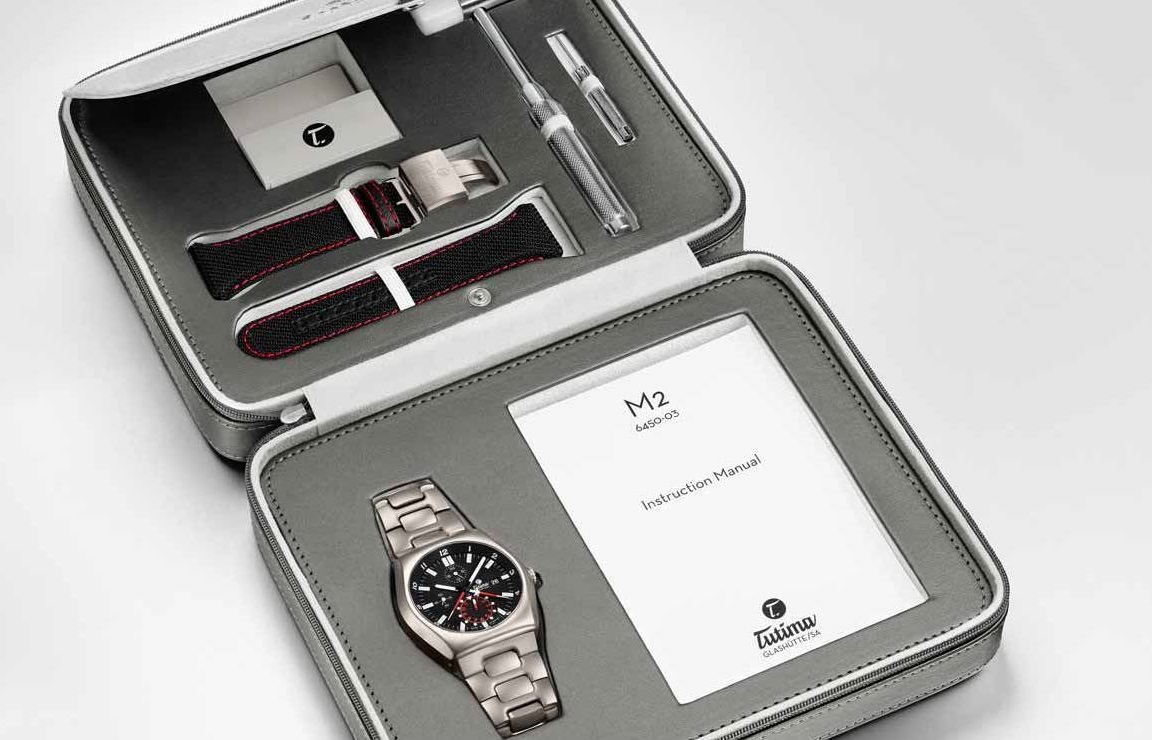 This watch has a bidirectional rotating bezel with luminescent hour markings. It has a titanium bracelet with folding clasp, and it is supplied with an additional Kevlar strap, together with the tools necessary for changing the strap. Price €5,200. 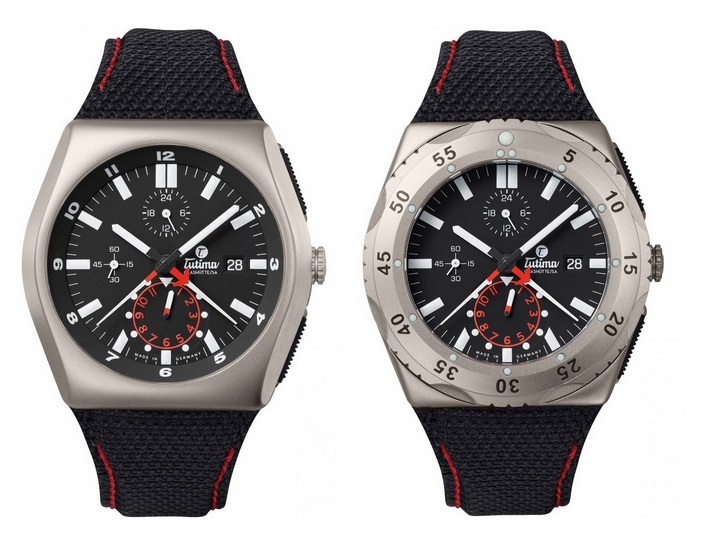