The sun comprises 50 yellow sapphires, the moon is depicted by 50 diamonds 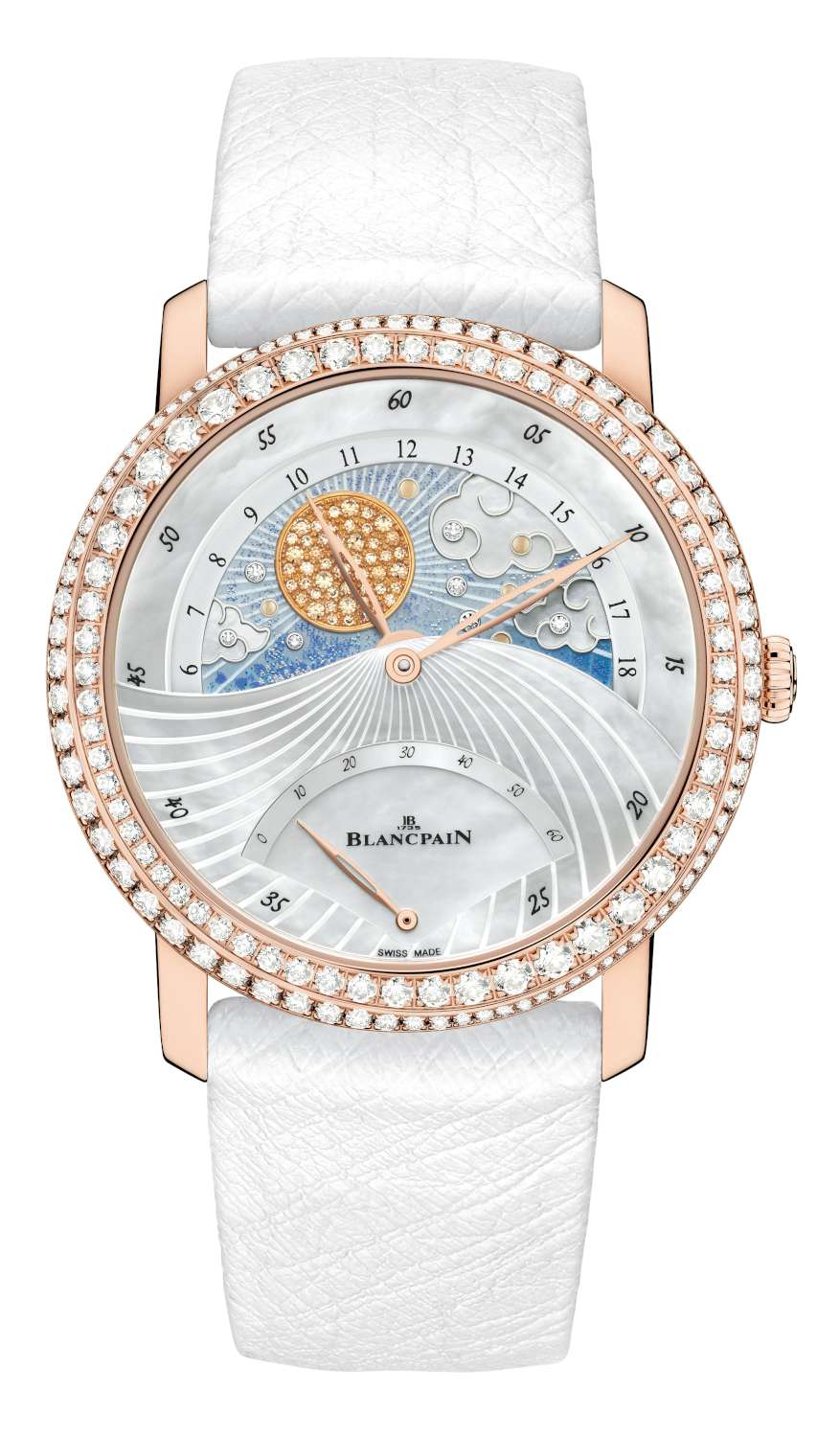 This complex and beautiful piece by Blancpain combines a lavish amount of bling with intricate mother-of-pearl crafting and an unusual mechanical movement featuring two retrograde functions, for hours and seconds, and a day-night indicator. It’s a combination that would seem to suit the variegated tastes of women for watches, and it mirrors what other brands are doing – Fabergé, Montblanc, Richard Mille and Omega to mention just a few – presenting very feminine watches with mechanical movements, visible through the sapphire caseback. Watch brands are presumably constantly engaged in the quest to understand whether their female customers appreciate mechanical watches, or whether they really prefer quartz. There are personalities such as Nicole Kidman who say that they like the mechanical, engineering-type aspects of a traditional watch. Many women prefer quartz watches just because they keep running and stay accurate without having to fiddle about with the crown. Longines’ new watches for women this year are exclusively quartz, and Corum have introduced new quartz models. Blancpain is remaining faithful to its origins as a mechanical watch manufacturer, even in its watches for women. 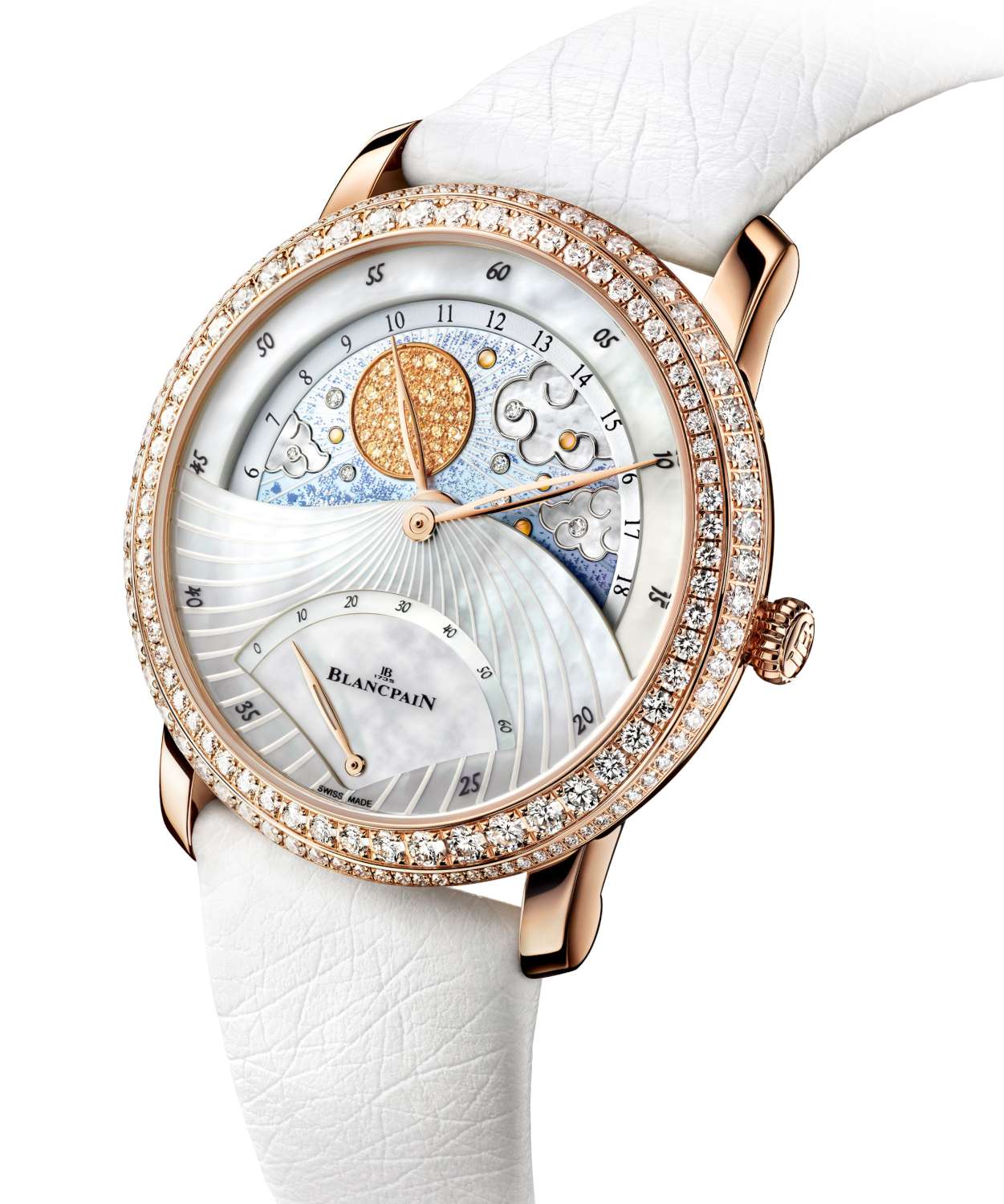 The case is in 18-carat gold, fairly large at 40 mm diameter and 11.35 mm thickness. The mother-of-pearl dial is on multiple levels, creating an impression of complexity and depth. The central day-night disc rotates twice every 24 hours, giving the watch an ever-changing appearance, with different colours of the mother-of-pearl used to suggest the change from day to night. The moon is depicted by 50 diamonds, while the sun comprises 50 yellow sapphires. The disc includes stars in the form of tiny half-beads of mother-of-pearl and 14 diamonds. The bezel is set with two rows of 140 diamonds: the total carat weights are 0.202 carats on the dial, and 2.055 carats on the case, for a total of 2.257 carats . The watch has a white ostrich strap.

The minute hand is the only conventional indication, rotating once every hour. The seconds hand is retrograde, jumping back to zero after 60 seconds. The hour hand is also retrograde. What happens is that just before 6 o’clock, both in the morning and the evening, the day/night disc rotates through 180° to change the scene from night to day or vice versa. This rotation is a fairly slow process, lasting four minutes Then at 6 o’clock the hour hand jumps back retrograde to the beginning of the scale.

The 1163JN movement is based on the calibre 1150. Blancpain has considerable experience in retrograde functions, based on snail-shaped cams that give the hands a smooth, progressive movement, followed by a rapid, vibration-free retun to zero. 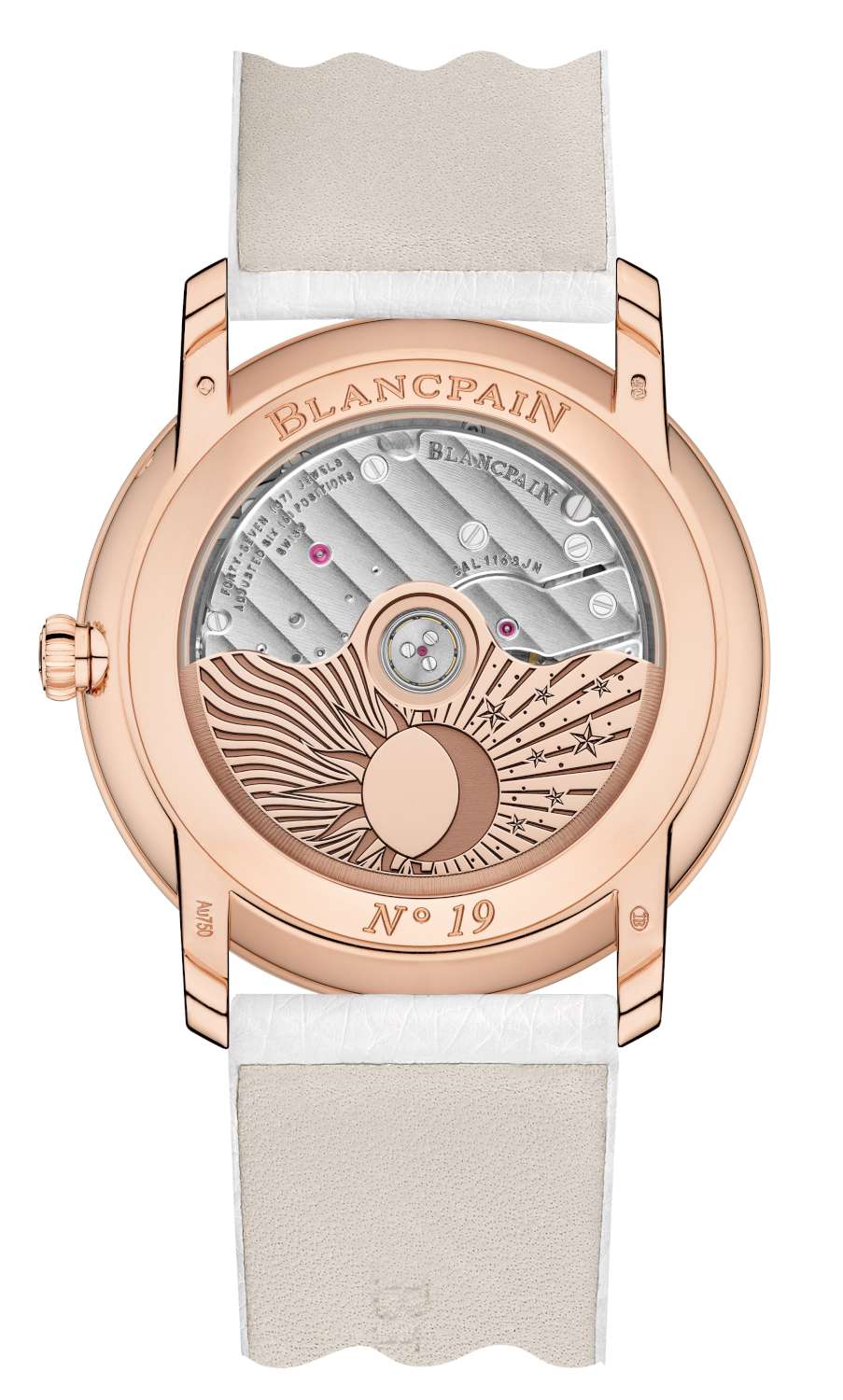