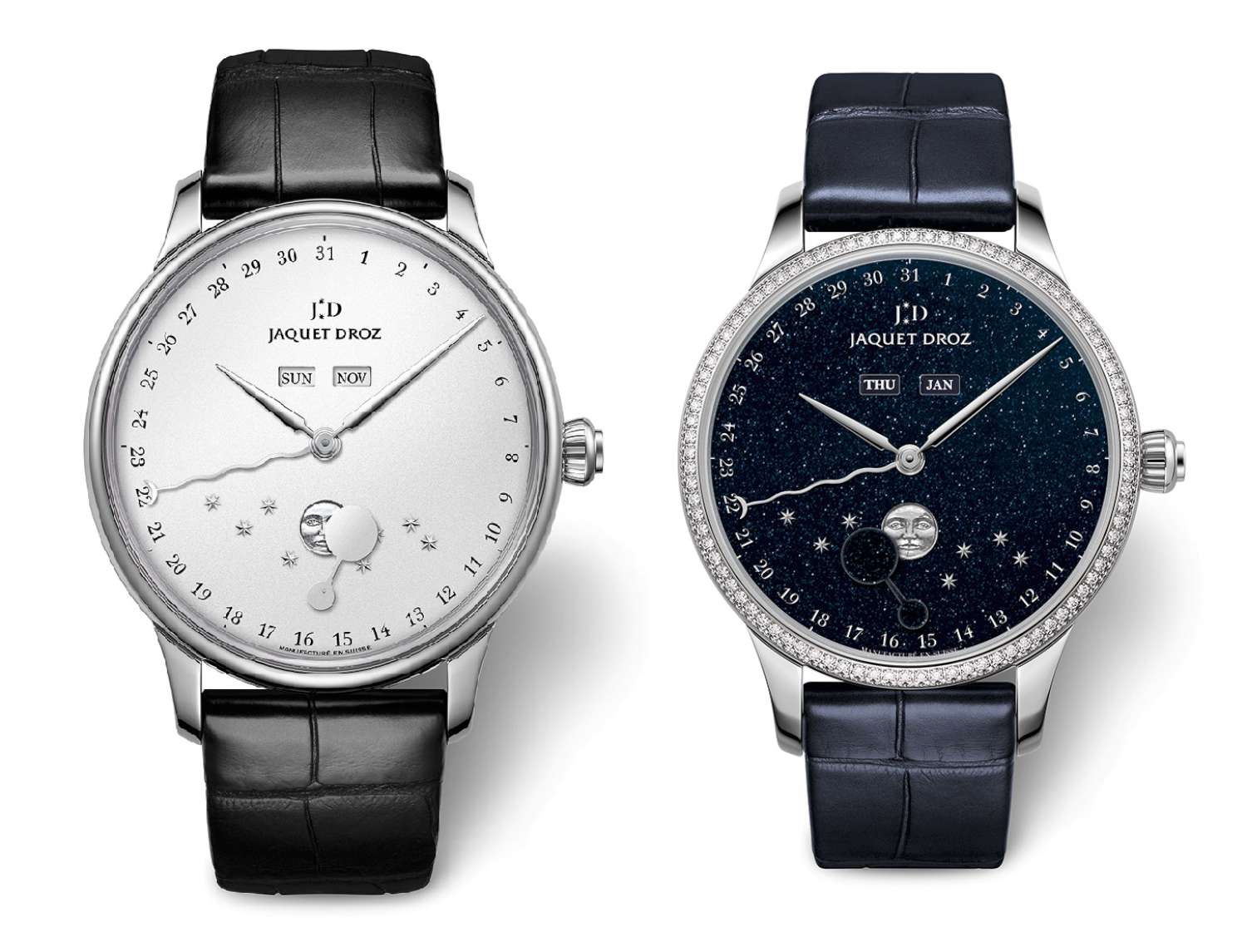 Two new versions of the Eclipse, a watch that Jaquet Droz introduced in 2010. It’s a timepiece that has all the Jaquet Droz DNA: a symmetrical dial designed to be uncluttered, leaving as much free surface as possible, and a few quirky touches such as the wiggly hand showing the date and the unusual system of indicating the moon phase. Instead of a round disc with two moons rotating behind a dial window with double semicircular profile, the moon remains fixed on the dial, and a paddle in front moves from one side to another and then, after having completed the complete 29.5-day cycle from full moon to full moon, it flicks back retrograde-style to start again. It’s a beautifully functional piece, and the only decorative touches on the dial are the eight rhodium-plated stars around the moon – eight is a recurrent number in Jaquet Droz’s tradition, from when the brand founder started working with China, discovered that eight is a lucky number there, and built the shape into some of his watches such as the Grande Seconde. The impression of space is exceptional particularly in the smaller version with aventurine dial, where the tiny glittering inclusions in the blue quartz mineral create a beautiful night sky effect. 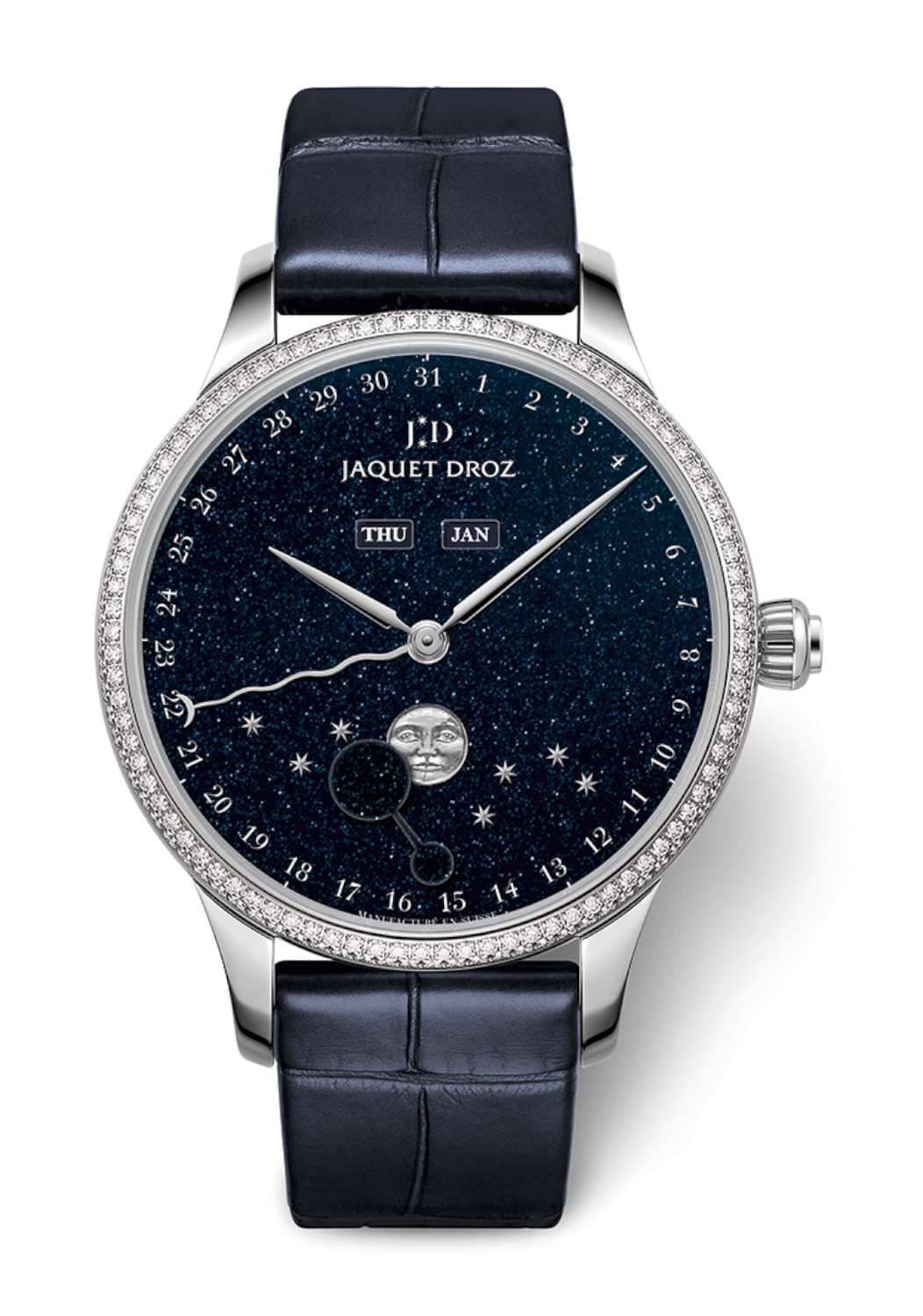 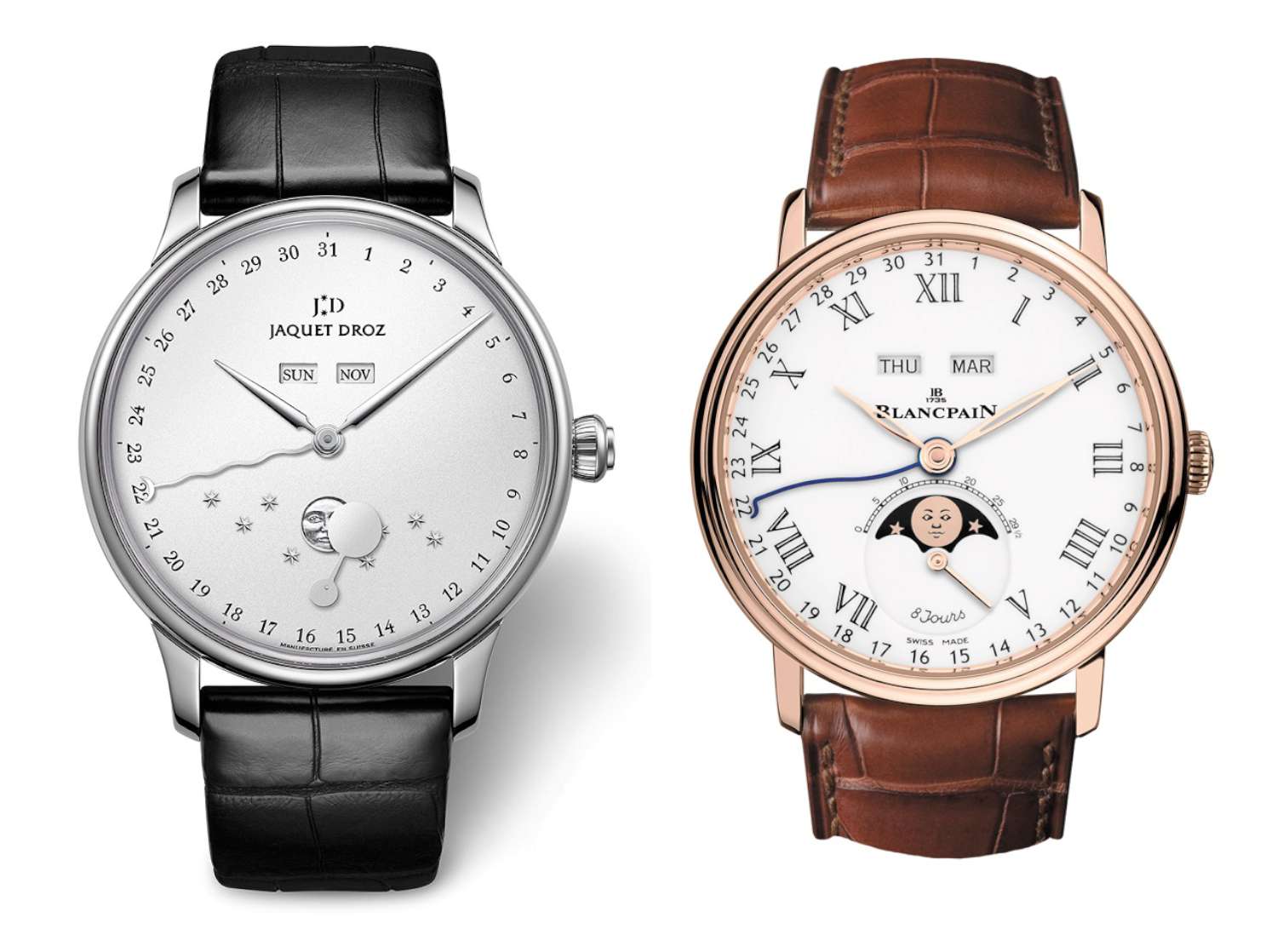 This piece is a so-called complete calendar, in which the date has to be corrected in every month with 30, 29 or 28 days. The moon phase is based on the usual 29.5-day approximation which eventually needs correction. Correctors in a watch like this need to be practical, and in this piece the pushers are cleverly hidden from front view but are very obvious when seen on the caseband. (The photo below is of a preceding version of the Jaquet Droz Eclipse). 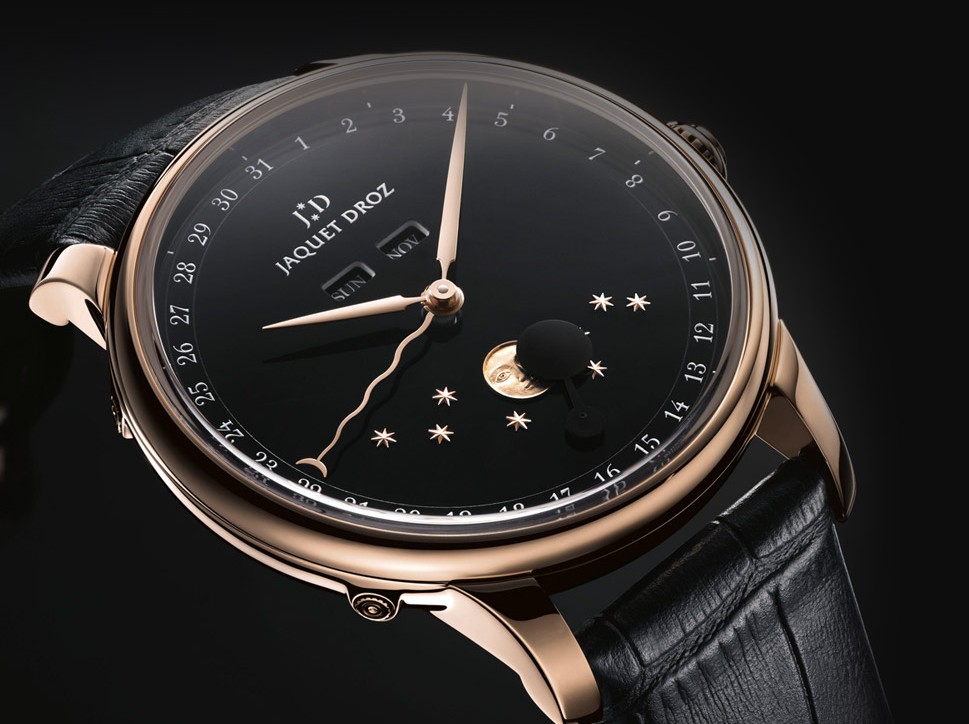 The case of the version with opaline silver dial is large, at 43 mm in diameter and 13 mm thick. It is water resistant to 30 metres. The version with aventurine dial is smaller at 39 mm, and the stainless steel case is set with 176 diamonds for a total of 1.28 carats. In both, the sapphire caseback reveals the fine movement finish, with radial Côtes de Genève on the oscillating weight, and rhodium-plated bridges also finished with Côtes de Genève. Below, caseback of the smaller aventurine version. 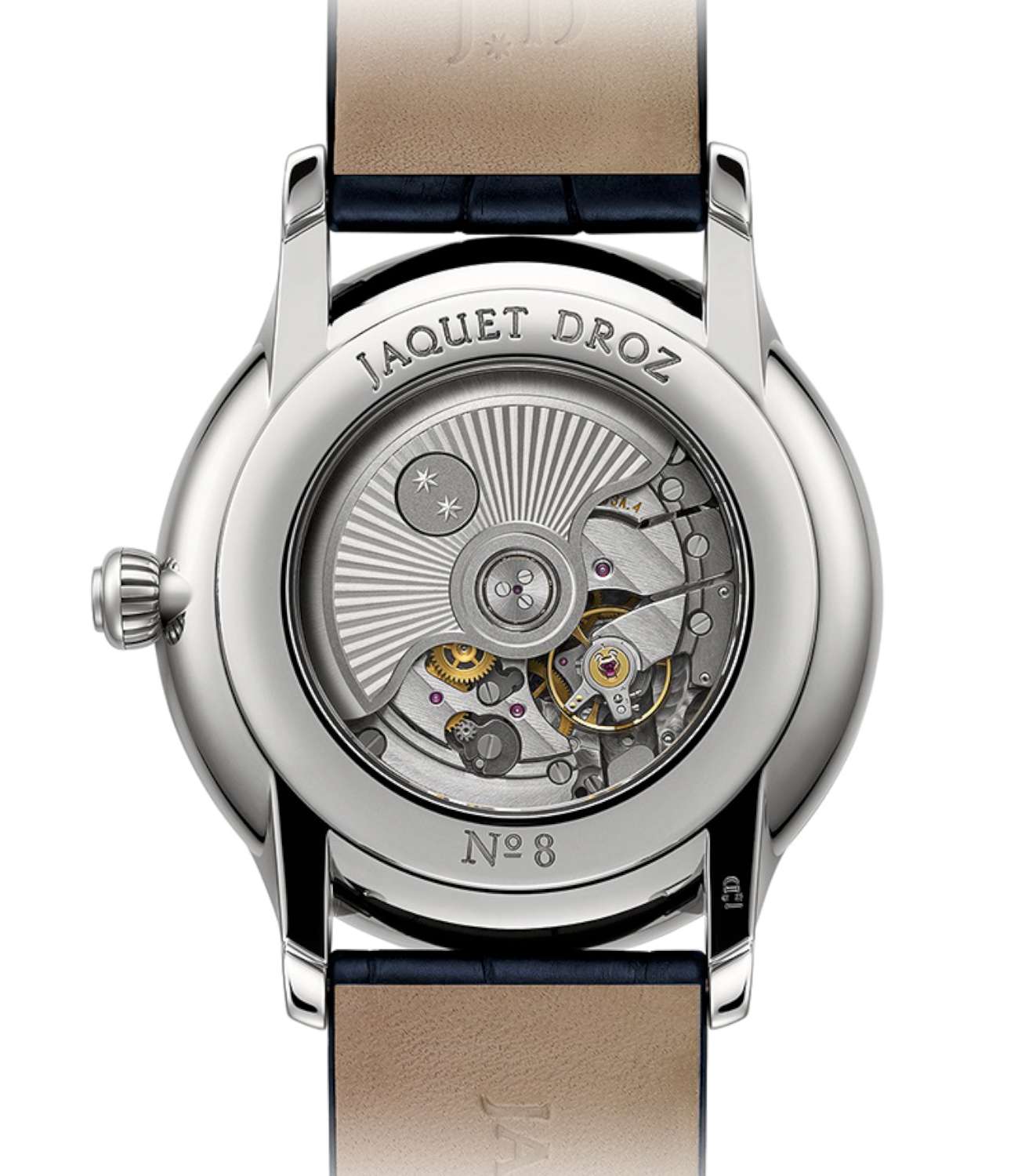 The movement is the Jaquet Droz 6553L2 automatic, with double mainspring barrel and a power reserve of 68 hours. It runs at 28,800 vph (4 Hertz). The same movement is used for both the versions, and so the caseback window looks smaller in the men’s version. 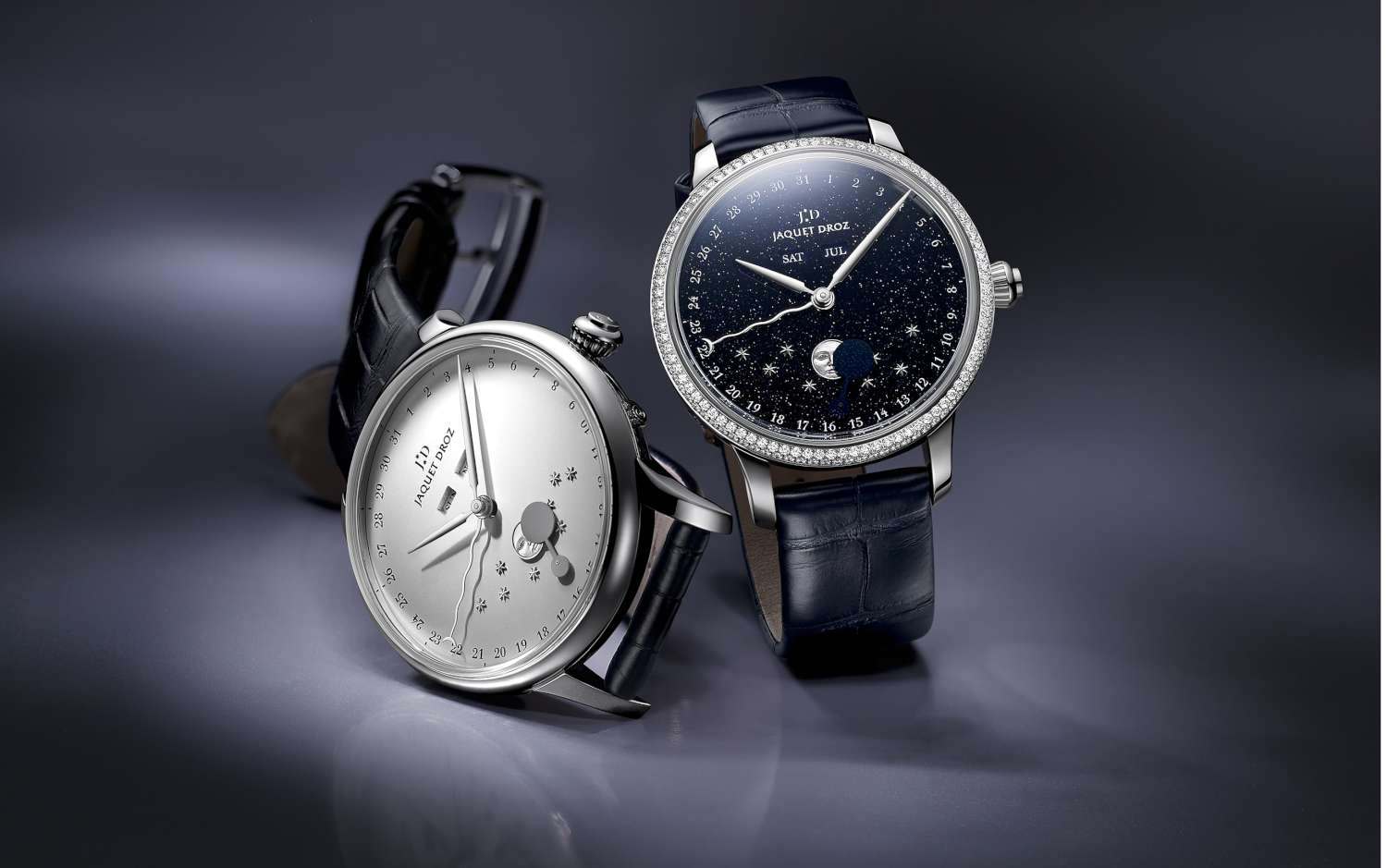 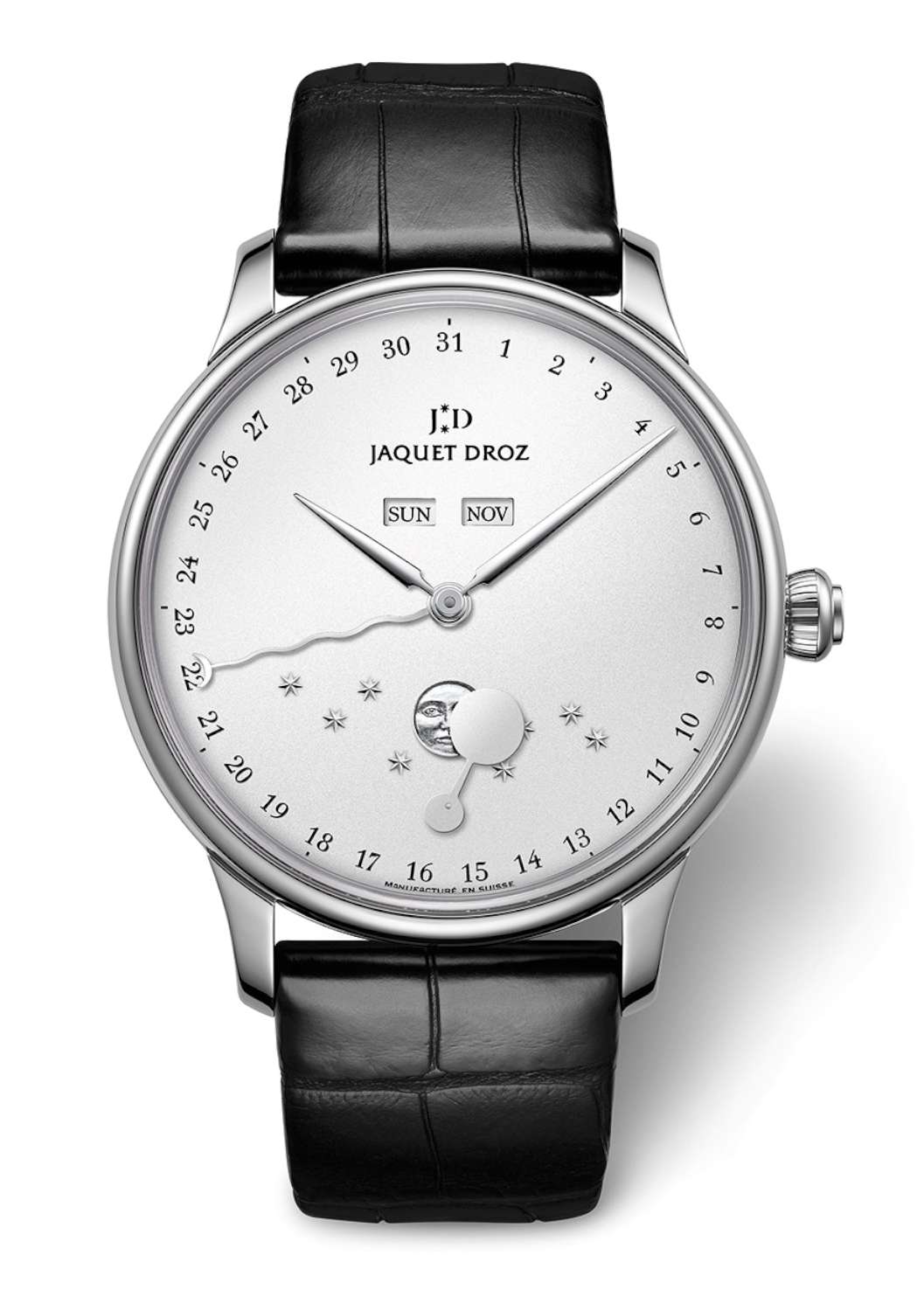