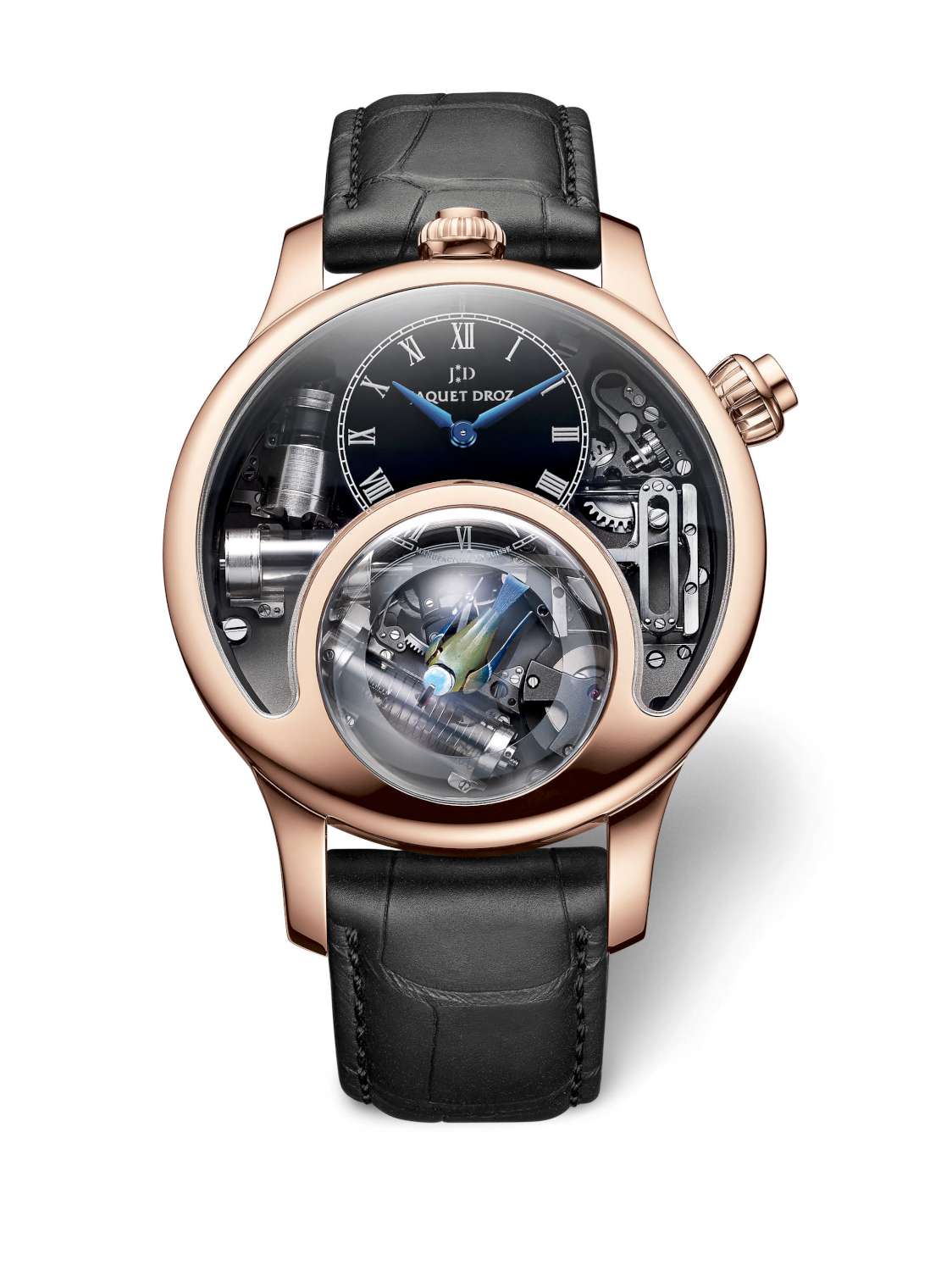 Back in the 18th century, Pierre Jaquet-Droz became famous in the royal and imperial courts of Europe and far beyond for his amazing automatons. The Writer, for example, was a seated boy who could actually dip a real quill into real ink and write something on a real piece of paper. The Charming Bird by Jaquet Droz continues the same tradition, with not quite the same degree of realism, but this is only to be expected, considering that the bird, which revolves, opens its beak, sings and flaps its wings, is tiny, placed on the dial of a watch. 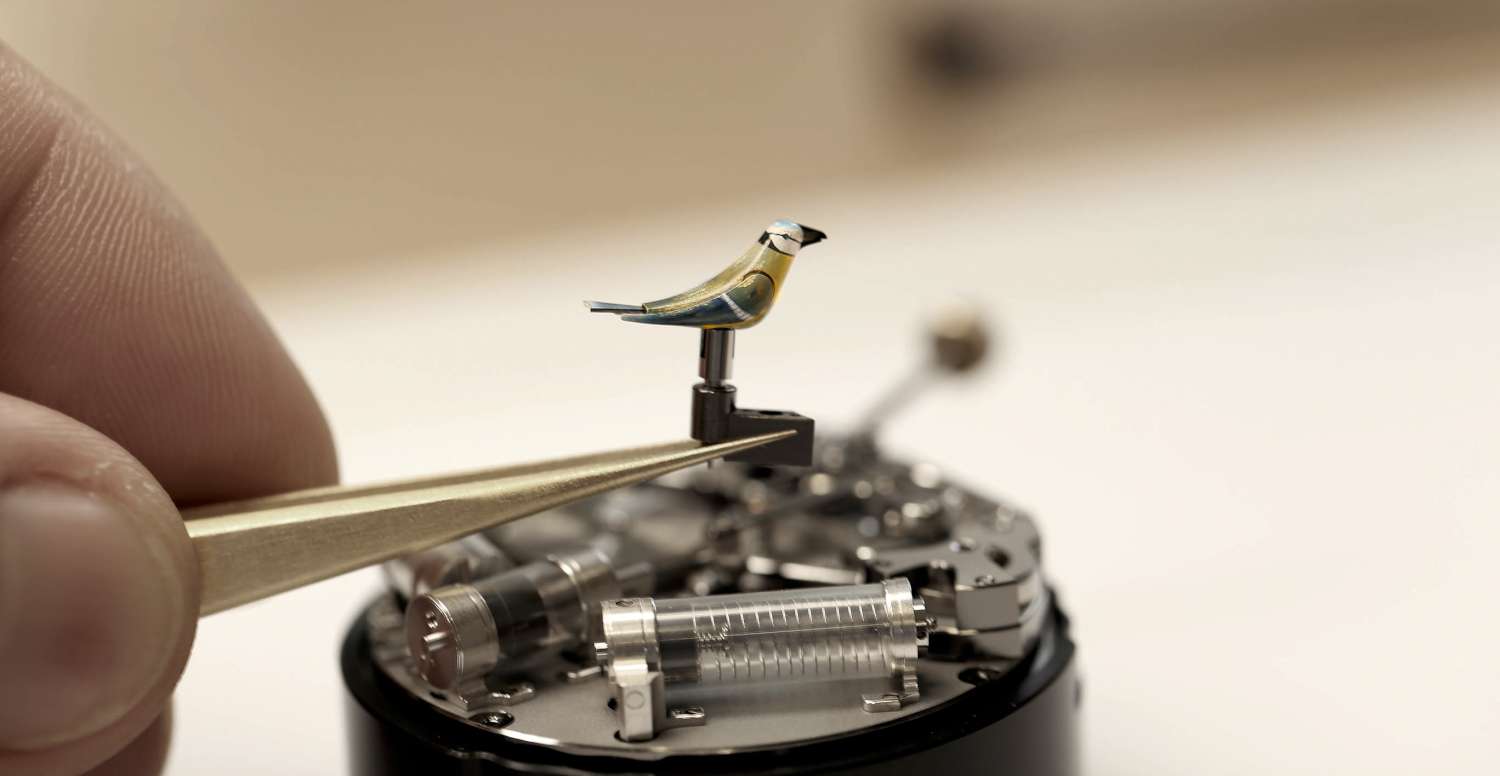 This timepiece is 47 mm in diameter and 15.75 mm thick, except at the centre of the dome at which it reaches a thickness of 23 mm. It has a red gold case, a black dial with platinum Roman numerals, and a sapphire watchglass designed to intensify the light arriving from outside it. Each bird – the watch is made in two limited editions in white and red gold, each of 28 pieces – is decorated by hand, engraved and painted by the artisans working at the Jaquet Droz Ateliers d’Art. Its appearance is very modern, with parts of the birdsong mechanism in view and a cool grey aesthetic under the caseback. 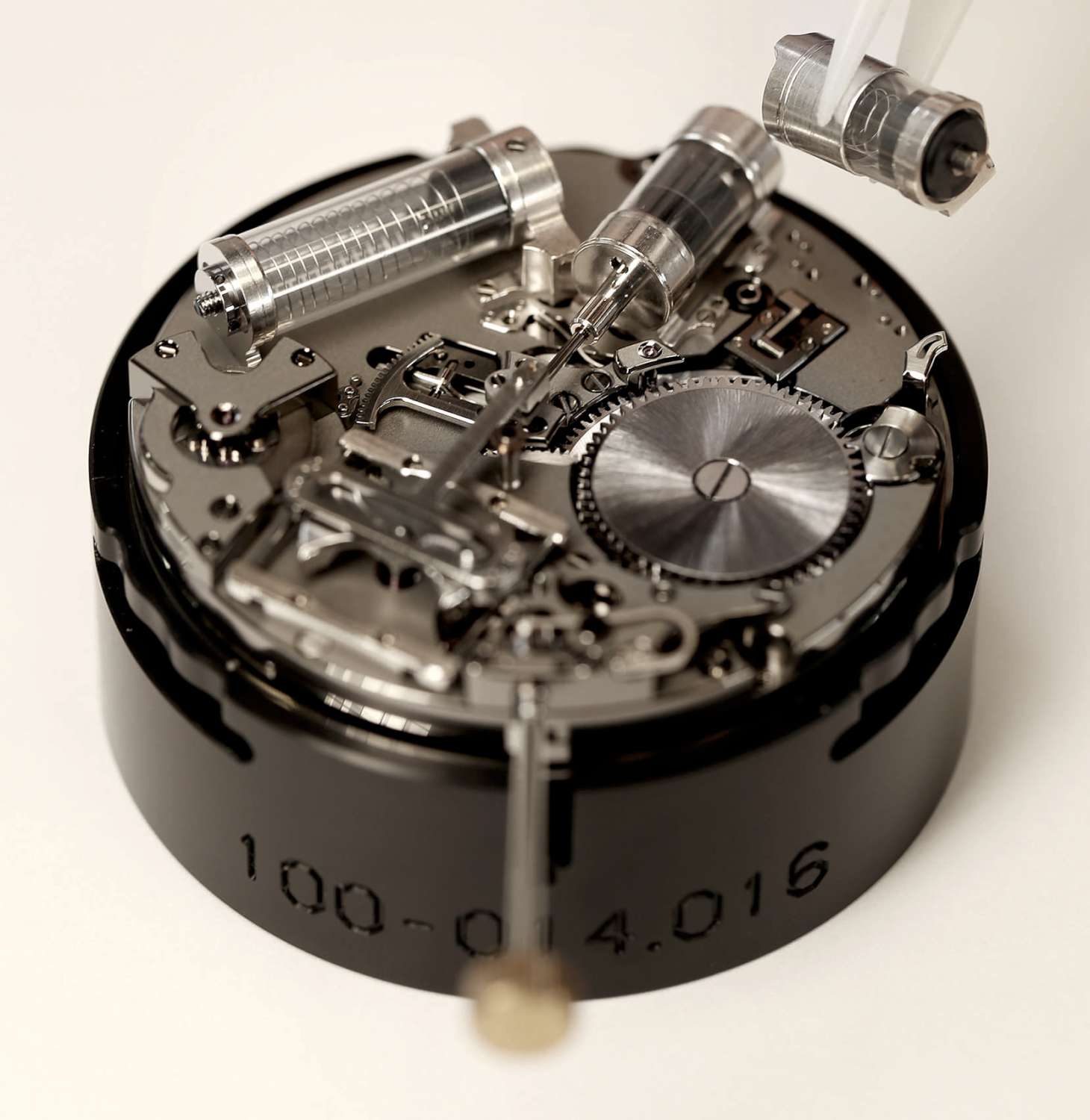 The bird’s song is created using three sapphire tubes with carbon pistons inside; the speed of the piston’s movement and the shape of the aperture for the air determines the sound produced. Other mechanisms control the bird’s rotation, the opening and closing of its beak, and the flapping of its wings and tail. The performance is activated by a pusher on the caseband. The watch is like a wind instrument, and so by necessity there is a direct passage from the innermost parts of the movement to the exterior. So it’s not water-resistant. But owners of this very expensive piece are not going to take it to the beach or out in the rain.

The time-keeping part of the movement, providing hours and minutes, is the self-winding Jaquet Droz 615 calibre, with a single barrel providing a power reserve of 38 hours. The oscillating weight is in platinum, the balance spring is in anti-magnetic silicon; the watch runs at 21,600 vph. 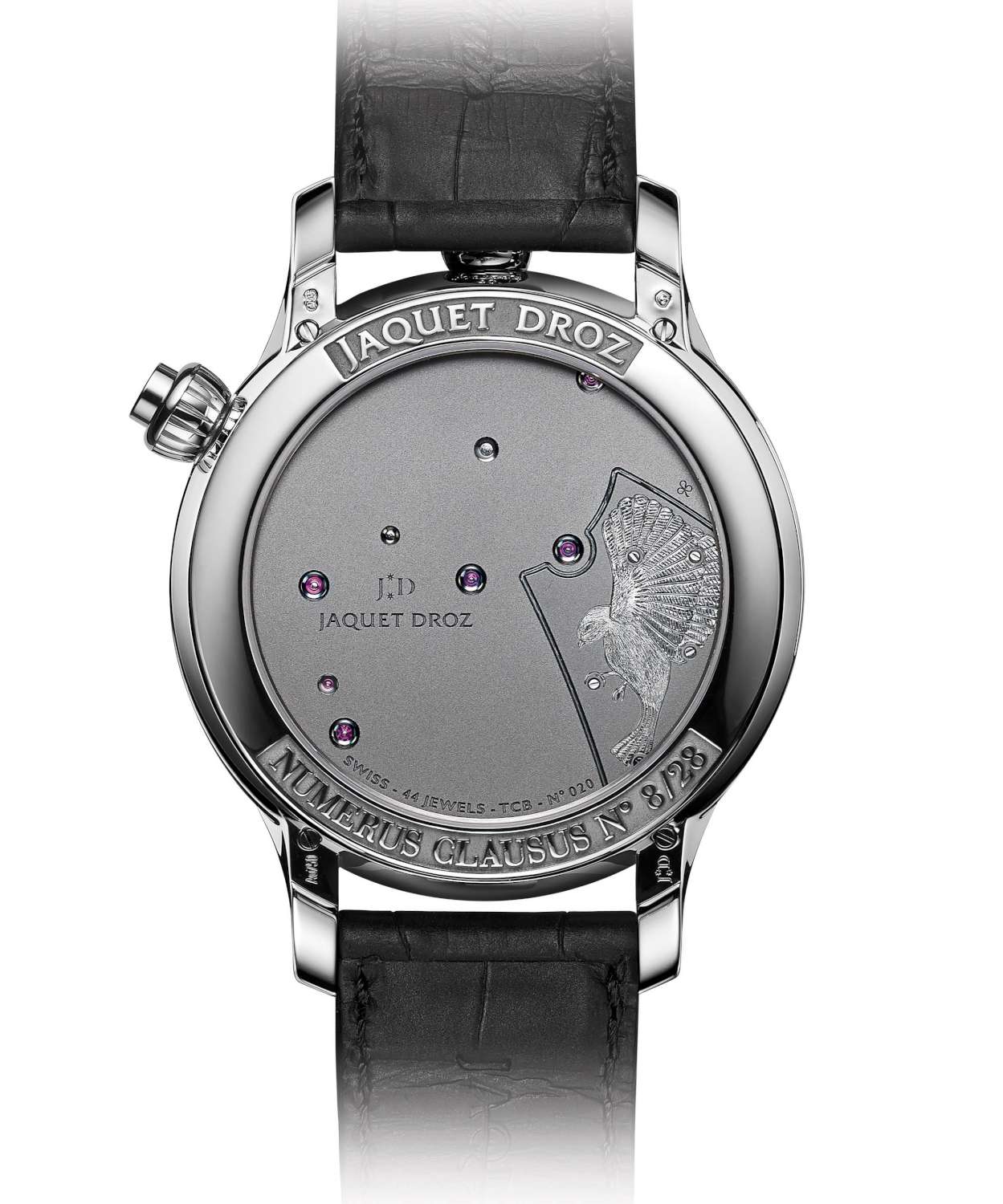 The Charming Bird by Jaquet Droz is reference J031533240 for the red gold version, and J031534240 for the white gold version. Each is a limited edition of 28 pieces. Every piece has its serial number engraved on the caseback. 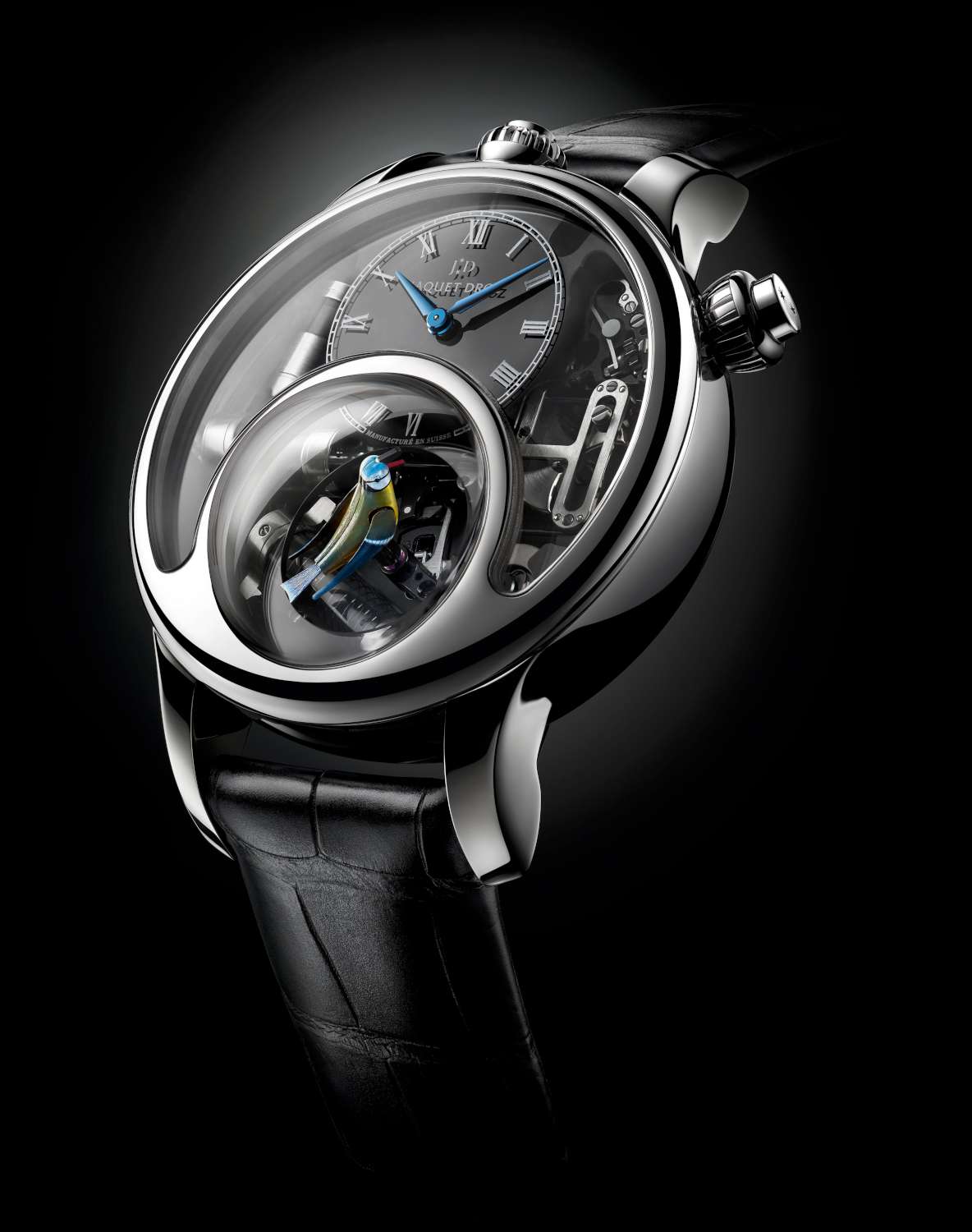