Rado traces its history back to 1910, when the Schlup & Co. workshop was founded in Lengnau by three brothers, Fritz, Ernst and Werner Schlup, working in the attic of their parents’ house. Over the first few decades of its life, it made movements and components supplied to other brands. The “Rado Watch Co. Ltd.” was set up as a subsidiary in the same company in 1937, followed by Exacto in 1940. One of the female members of the Schlup family married businessman Paul Lüthi in 1947; he joined the company and steered it towards making watches under their own name. The denomination was initially Schlup & Co., and then, following an unsuccessful attempt to register Exacto in South America, Rado. This name was chosen because it has no particular meaning and can be pronounced easily in any language.

The Rado name began to be used for production watches in the 1950s, and one of the first timepieces to appear with this brand name was the 1958 Green Horse, an automatic watch with exceptionally good water resistance. It had a feature that would become a visual trademark, the swivelling anchor motif in a small circular depression on the dial. Rado soon developed a specialization in scratch-resistant watches, and their first specifically scratch-resistant piece was the DiaStar 1, presented in 1962, made using hardmetal (a cemented carbide such as tungsten carbide or titanium carbide developed for machine tools) and sapphire crystal. In 1976, Rado used metallized sapphire crystal to coat the watchcase in the Rado Dia 67.

After joining the Swatch Group in 1983, Rado presented their first watch based on ceramic in 1986, the Rado Integral, with a sapphire watchglass and a bracelet in high-tech ceramic. In 1995, the Concept 1 won an award as the hardest watch at the time. In the photos below, courtesy of Rado, from left, the Green Horse, the DiaStar 1, and the Integral. 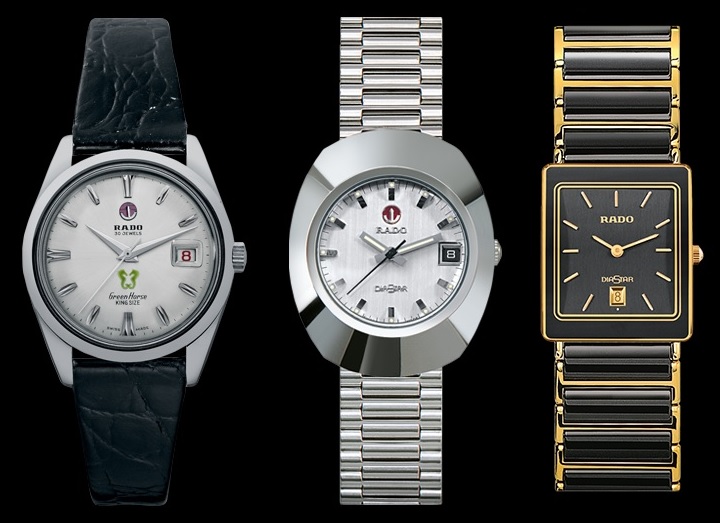 Rado’s efforts to reach extreme hardness produced the V10K in 2002, with 10,000 Vickers hardness created by a coat of nano-crystalline diamond. It was certified by the Guinness Book of Records as the hardest watch in the world.

In 2001, eSenza (the name comes from the Italian “senza”, without) was the first Rado watch without a crown. To adjust the time, the back had two recessed contact areas, one marked + and the other – (for advancing or turning back the time), into which the user placed a magnetic element at the end of the leather strap. By 2013 this technology had been developed much further and Rado presented the first wearable touch-controlled device, the Rado Esenza Ceramic Touch. Four sensors embedded in the monobloc ceramic allow the user to set the time just by touching the bezel in certain positions and sequence. In the photos below, courtesy of Rado, from left, the V10K, the eSenza, and the Esenza Ceramic Touch. 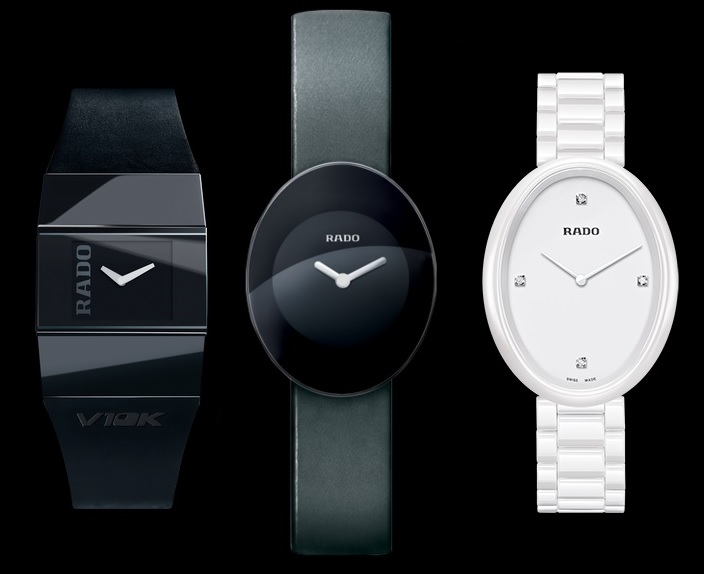 As is usual for watch brands, there are no official figures on the number of watches made per year. The figure of half a million watches per year that can be seen on many websites is based purely on the Wikipedia entry for Rado watches, and I can find no confirmation in the company’s web pages or Swatch Group reports. Perhaps the real figure is around 150,000 watches per year. Its principal markets are Southeast Asia, China, India, Japan and the Middle East, as well as Europe and the USA.

Rado has close links to tennis, and has been official time-keeper for many tournaments throughout the world. Its ambassador tennis player is Agnieszka Radwanska, whose career successes include “WTA shot of the year” with an incredible backhand volley while spinning around, in a match against Kirsten Flipkens.

One of Rado’s ambassadors was Andy Murray, but he seems to have disappeared from their website (put “Murray” into the search window of rado.com and you get “No matches for Murray” haha) suggesting that the sponsorship deal has been reconsidered. In 2013, after beating Novak Djokovic to win the Wimbledon trophy, he quickly put on his Rado watch so that it would be seen in the trophy presentation photos, but it was an automatic, and he didn’t notice that it had stopped and was showing the wrong time. 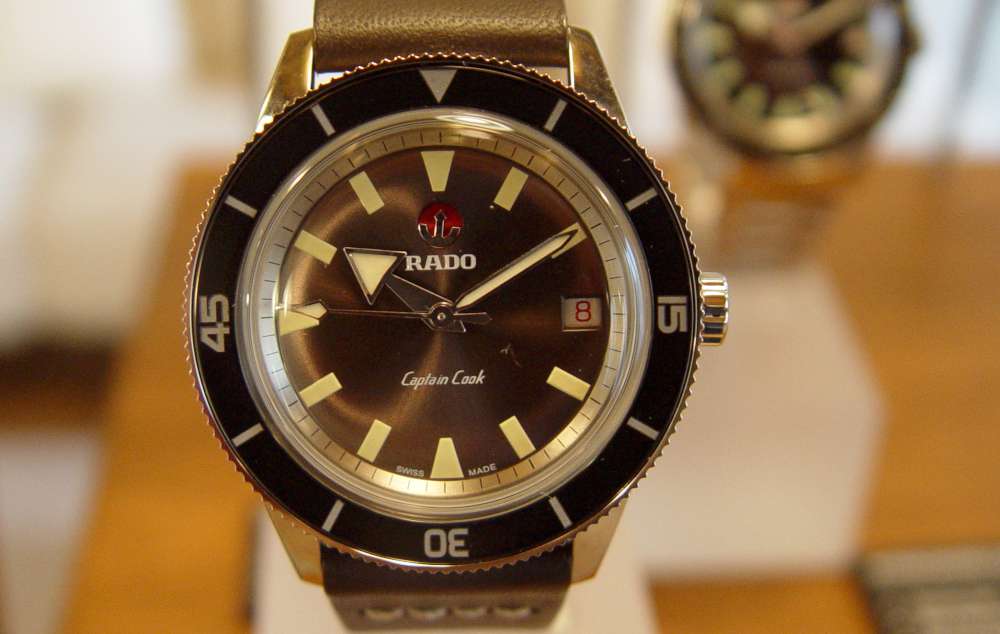 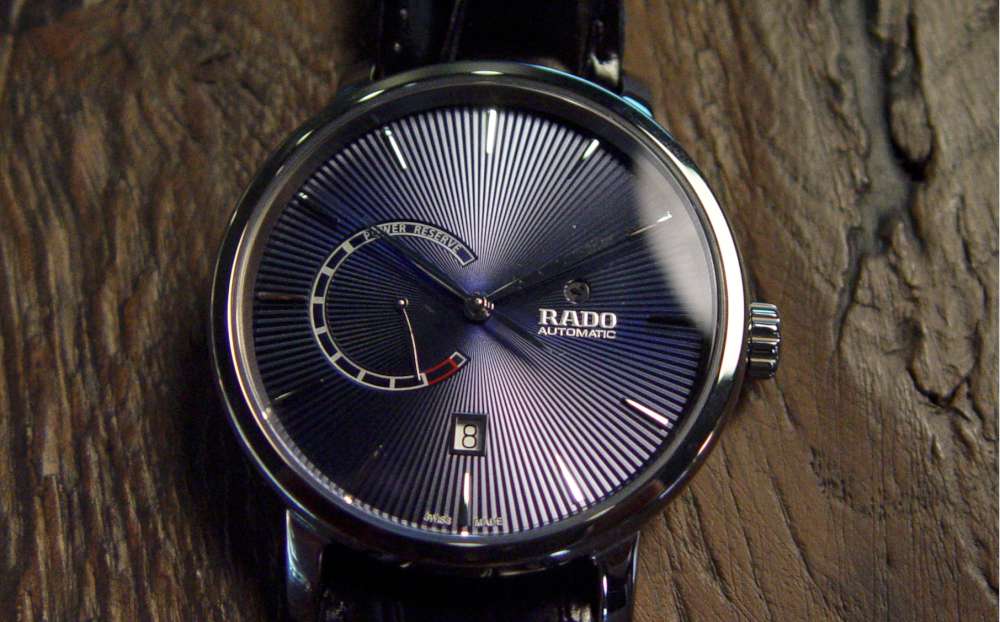