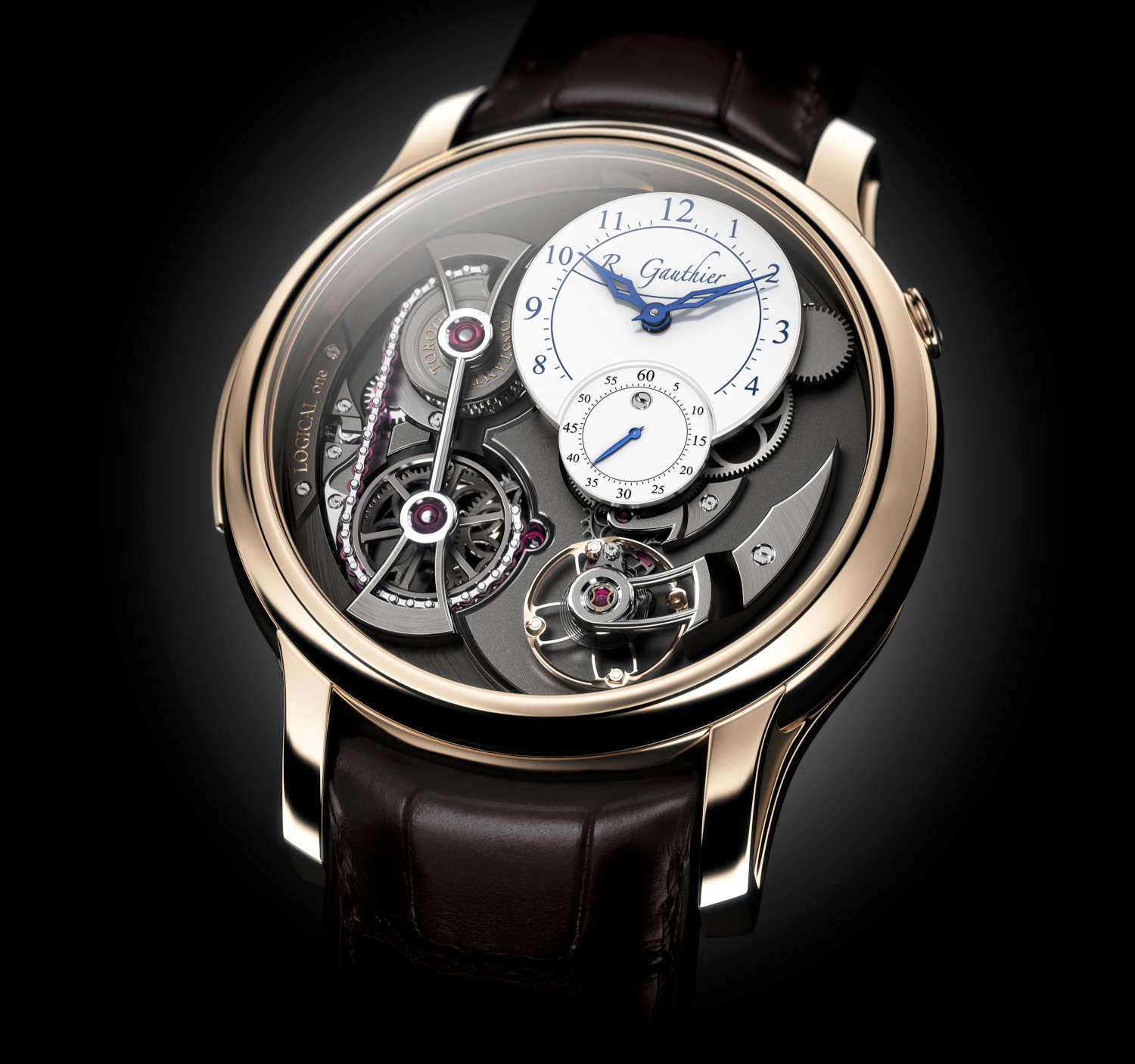 I recently wrote about the Breguet Tradition Chronographe Indépendant 7077 and how its pusher system of winding the blade spring chronograph could represent an important innovation for watchmaking because a pusher is a more robust mechanism than a winding crown, less subject to breakage and overwinding. In actual fact, another brand has already applied this system: Romain Gauthier and his Logical One. The watch bears some resemblance to Breguet’s open-dial pieces, with some of the juicier parts of the movement open to view on the front – chain and fusée constant force system with a chain with ruby links, visible balance – and on the back, where you can see the mainspring barrel and a 46-hour power reserve indicator. 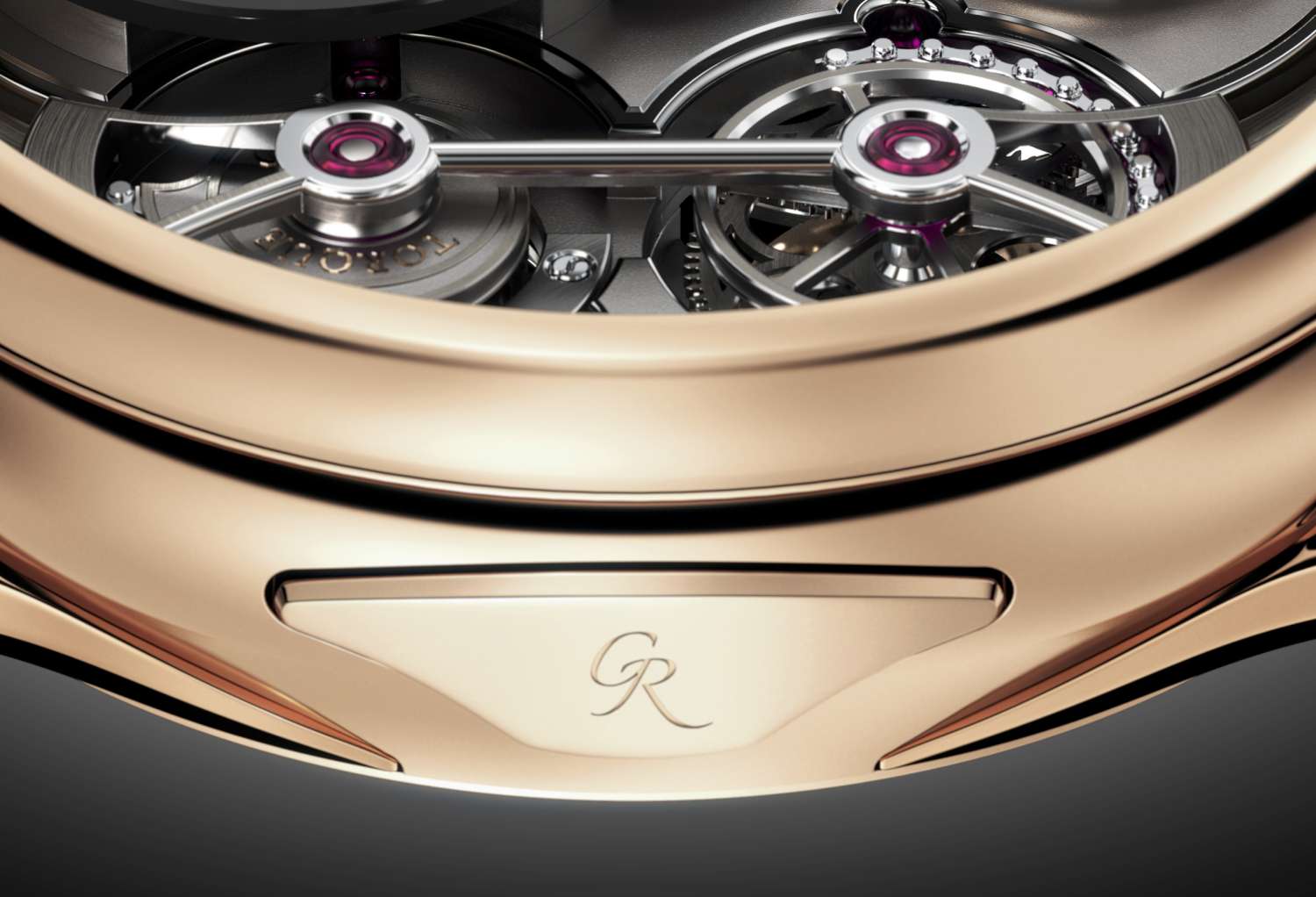 In this watch, the winding pusher is on the left-hand side of the caseband. A pusher is more robust than a crown, because the traditional crown is a small component with a slender stem that necessarily operates at 90° with respect to the mainspring barrel, while the pusher in this watch operates on the same plane as the mainspring. To wind the watch, you just keep pushing the pusher, watching the power reserve indicator. There is a crown on this watch – at 2 o’clock, used just for setting the time. 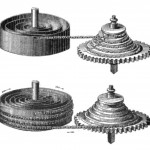 There are a lot of innovative systems in this watch. The chain and fusée constant force system doesn’t have the usual conical fusée, but rather a cam, so that the distance between the cam pivot and the point of force gradually changes, maintaining the force transmitted to the movement constant. While in a conventional chain and fusée system (as in the illustration at right) there is a long chain that winds around the mainspring and then onto the conical path on the fusée. Romain Gauthier has reduced the travel of the system so that the chain can be kept very short, with large links made in ruby to reduce friction. Somewhere there is another wheel that reduces the many rotations of the barrel to the less-than-one rotation of the cam. Below, the constant force mechanism in the black titanium version of the watch: 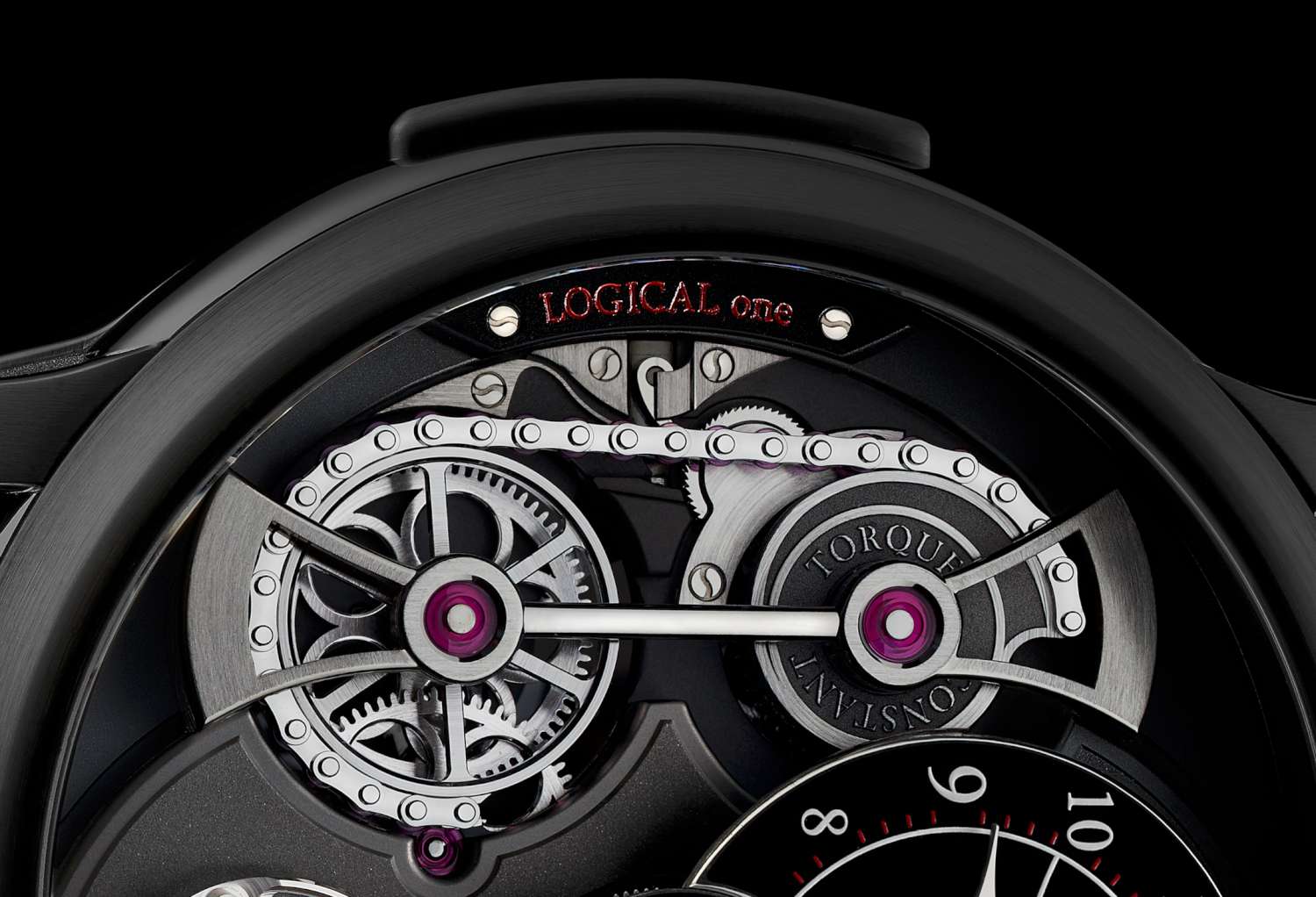 Synthetic crystal also features in the mainspring barrel, in which two sapphire plates reduce the friction between the turns of the mainspring and the metal barrel. Romain Gauthier also invented his own gear wheel geometry and gear teeth profile, a distinctive balance wheel, and his own pallet lever whose design improves its rigidity. There is something original in the movement finish as well: while in most high-end watches plates and bridges are bevelled, in Logical One, the bevel is double, creating an internal angle for a bordered effect.

Logical One is available in a number of different versions, varying in case material and dial finish. The case is in red gold or platinum, 43 mm in diameter, 14.2 mm thick, with the customary 30 metre water resistance (resistant to splashes, no swimming or showering). It is mounted on an alligator strap with pin buckle. The movement has 355 components and runs at 28,800 vph (4 Hertz). 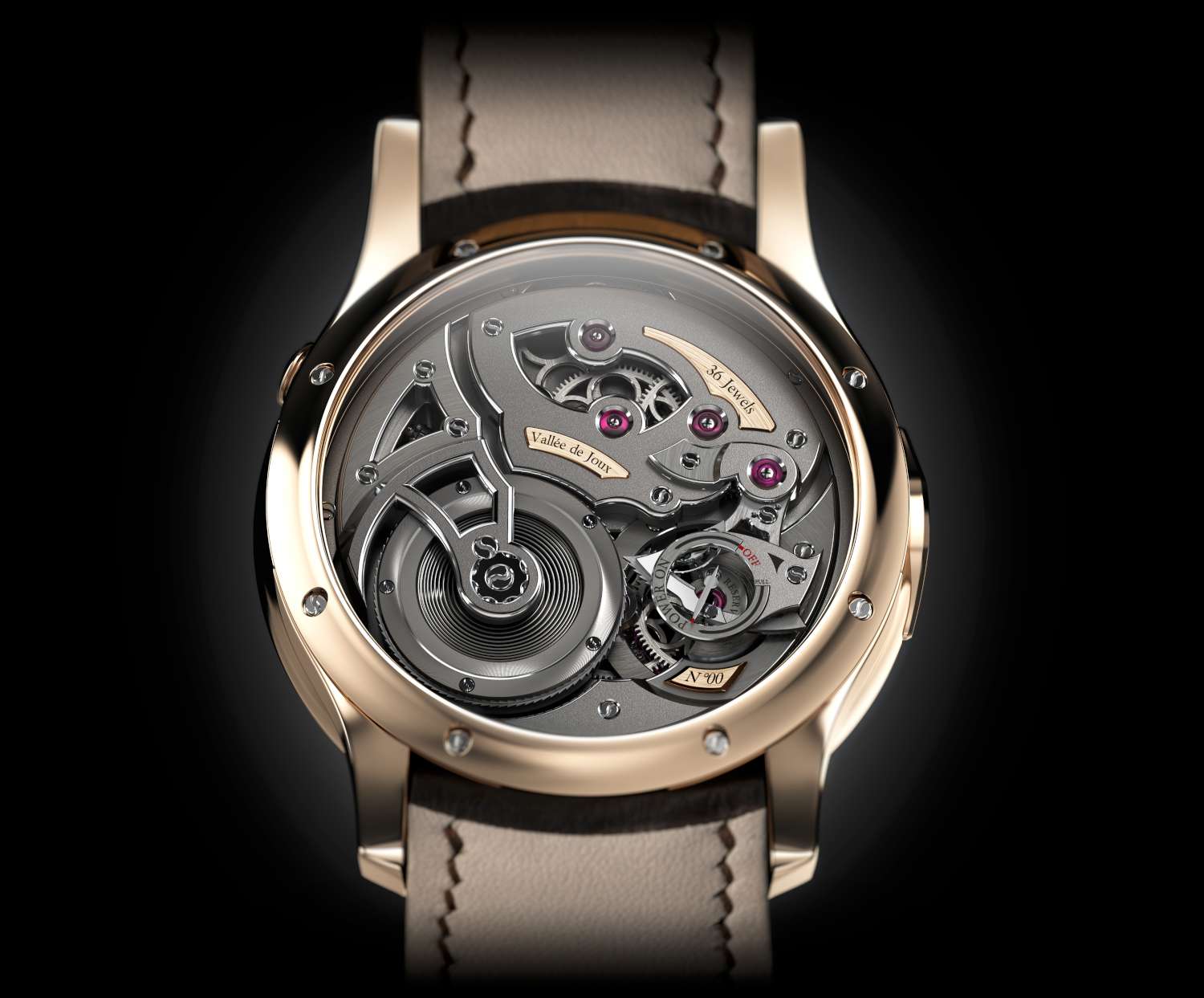 Romain Gauthier was born in 1975 in Le Sentier, a town at the heart of the Swiss watchmaking industry in Vallée de Joux. He studied precision engineering, began work as a machine programmer and operator, and at the same time nurtured his ideas on founding a new watch brand. He took an MBA in 2002, for which his dissertation was the business plan for Montres Romain Gauthier. Three years later he launched the brand, and he presented his first watch, Prestige HM, at Baselworld in 2007. Logical One, which comprises four patents, was exhibited at the same show in 2013.

Logical One has been in production since 2013 and so customers don’t have to wait long for the watches, which are available from authorized retailers or direct from the Manufacture in Le Sentier, Switzerland. 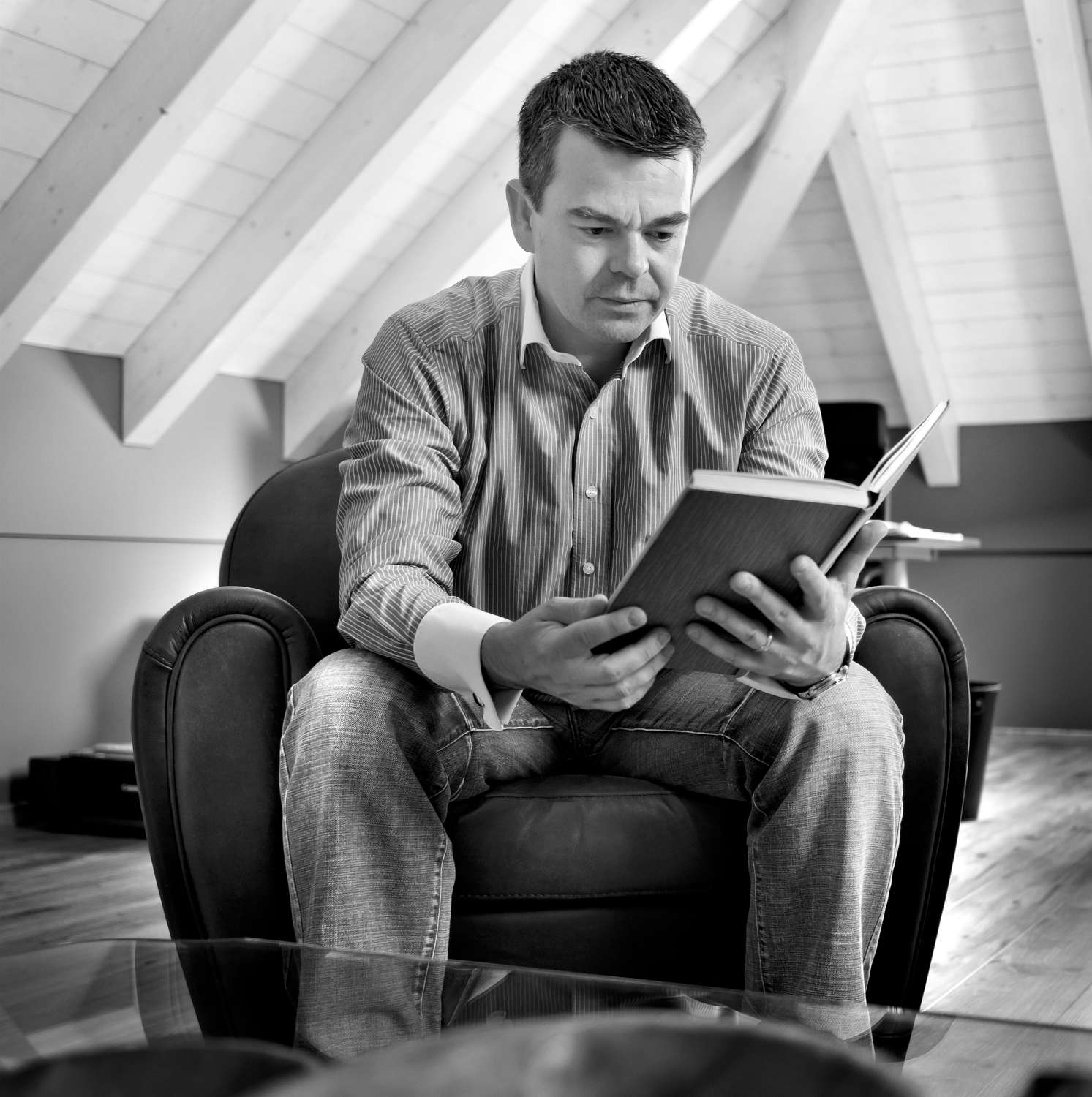