Hour and minute hands with SuperLuminova

Price €4,200 (€3,529 without VAT) for this version, available online from Stowa website, delivery time about 6 weeks 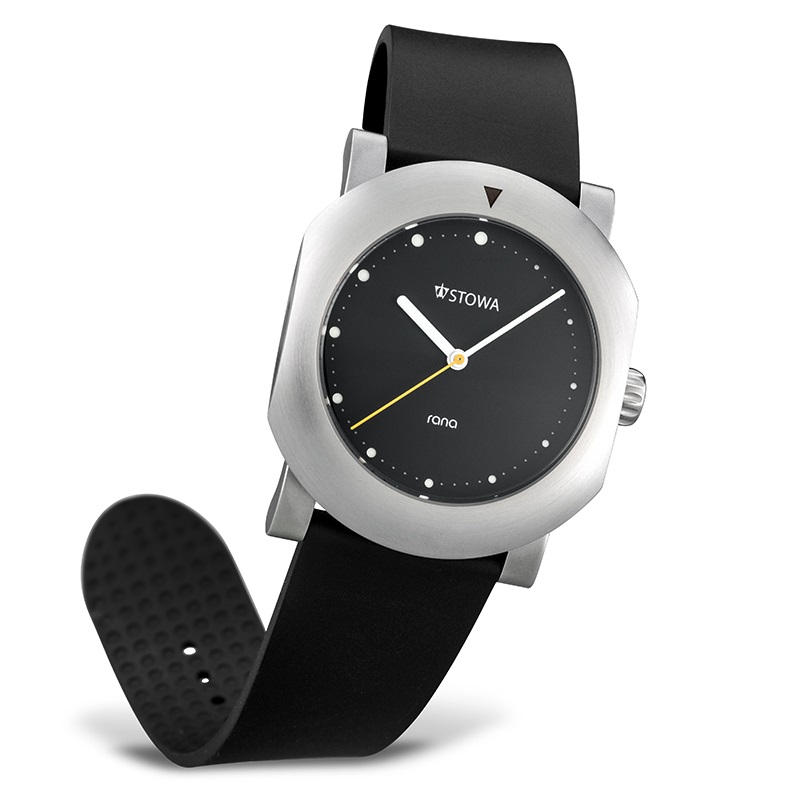 Rana, a watch by German brand Stowa, is, in my opinion, one of the most original new timepieces of 2015. It represents an important step forward for a brand that is best known for its ever-popular pilot’s watches based on its own historical B-Uhr pieces. Rana is a powerful concentration of innovation in design and materials. 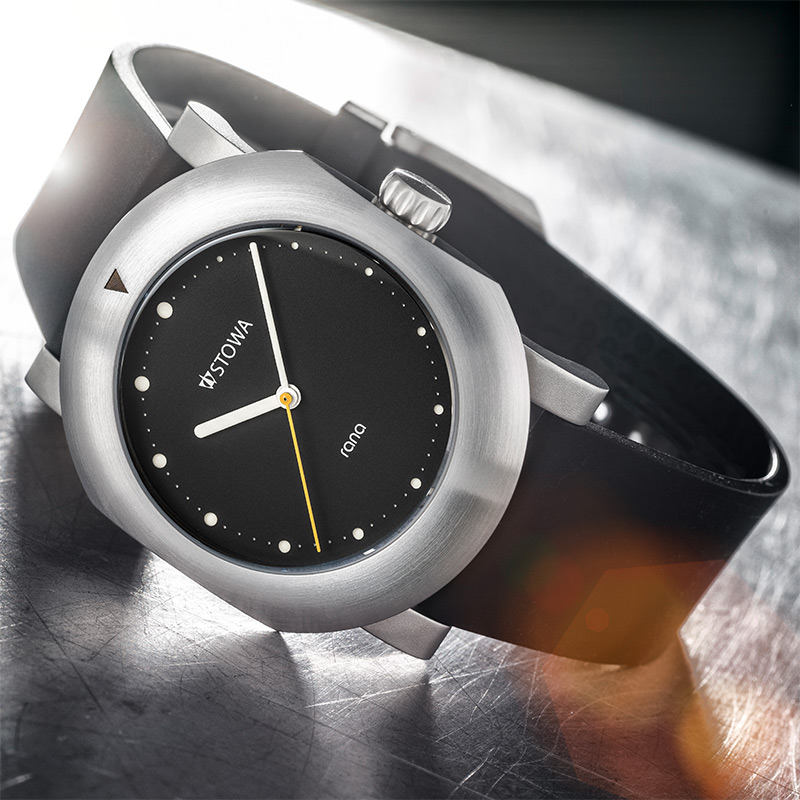 What does it remind you of? That cool, aluminium-colour brushed metal contrasting with the black dial? What about an iPad? There is a connection, because the watch is the result of the collaboration between Hartmut Esslinger, German-American designer now living in California, who was born in Altensteig, a Black Forest town that was also the birthplace of Jörg Schauer, owner of Stowa. The design originated from Schauer’s desire to reposition his brand. In the photo below, Schauer and Esslinger (all photos courtesy of Stowa).

Esslinger’s long career includes work at Apple, but the major influence on his style is possibly Bauhaus design. He himself describes how Rana came into being: “We decided to design a type of watch which my collection was still missing: fast forward instead of retro, innovative shapes, matching contemporary apparel for both genders, and a connection between Stowa’s roots and German Bauhaus design. Since I have thin wrists, the main watch case should be floating – also expressing my sense of flying – and the dial with its DynaDots should combine quantitative and qualitative perception and reading of time.”

The powerful parts of Rana’s design are the case shape, the case engineering, and the hour markers. The result is a watch that looks different, though it takes time to appreciate what has gone into its creation. It’s a watch that looks right for the 21st century. Just think of all the other watch brands and what they are making: most of them make watches that were perfect for the 20th century, and there are a lot of timepieces that seem to come direct from the 1800s.

Esslinger himself gives an idea where it all comes from. “As a designer, you have to realize dreams; the ones that people could dream if they would dare to – and which they should be encouraged to really ask for. The imagery of groundbreaking products is usually very historical: my first proposal of an ‘iPad tablet’ to Steve Jobs in 1982 had been inspired by a slate block, my Sony Trinitron design for Akio Morita and Norio Ogha had been a picture frame, anticipating the shift to flat screens already in 1978.”

So, let’s take a closer look at Rana (the name cames from the Latin for frog, a reference to Esslinger’s design company, frog design).

The main case is circular, from which Esslinger has sliced off a piece on both sides. A simple design gesture that creates a new shape. The designer says that this is linked to function as well as appearance, because “round watches get caught in shirt cuffs,” which personally I don’t understand and doesn’t correspond to my experience, but never mind. The crown was specially designed and probably the curvature of its head corresponds to the dial’s original perfect circle. 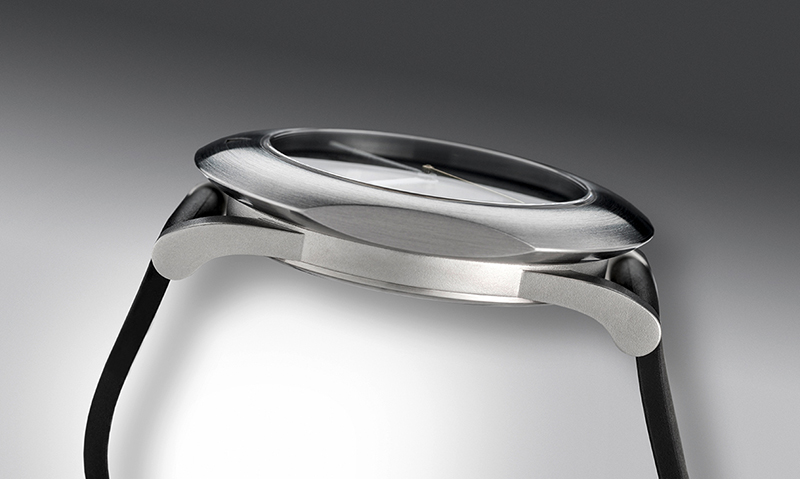 The case is in three main parts, which are, starting from the bottom, the caseback, a simple centre section with the lugs attached to it, and the main case above that is larger, 37 mm in width and 42.5 mm as its longest dimension. Because of this design, the case seems to be suspended above the wrist, “floating” as Esslinger describes it. The watch wears small and so is suited to all wrists, male or female. Seen from the side, it has a dramatic profile, a sharp-pointed ellipse, mirrored by the shape of the cut side.

Regarding materials, Esslinger says, “Machining and milling are no longer contemporary.” The case is made by metal injection moulding (MiM), using a material based on metal powder that is treated in the same way as injection-moulded plastic. From the back, the watch is just as appealing as from the front, with its functional lugs for a 22 mm rubber strap (leather straps are also available), and the display sapphire crystal window in a caseback providing indications on the watch, including its 5 bar (50 metres) water resistance. 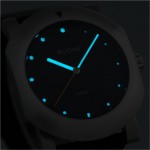 The dial is a sandwich structure, with the upper layer in laser-engraved steel. The lower layer is in silver, with the hour indications (DynaDots) coated in BWG9 SuperLuminova that is white during the day, and blue at night. The dots progressively increase in size from hour to hour from the 1 position round to 12. Hour and minute hands also have a BWG9 SuperLuminova coating for night-time visibility, while the second hand is either orange or black. The triangle on the bezel at 12 o’clock is perhaps a reference to Stowa’s tradition of pilot’s watches. Other dial versions are available, black or white, DynaDots or numerals.

The watch is powered by the ETA 2824-2 in its “Top” version, with the highest degree of finish, and with chronometer certification provided by a laboratory in Glashütte. To the basic ETA movement, Stowa adds a “woodpecker neck” regulator made by Mühle-Glashütte, which adds visual interest. The oscillating weight is smooth and pristine in finish, with an engraved frog adding a decorative touch. The movement is really the only classical part of the watch, creating a pleasant contrast. Who knows, perhaps one day Stowa will design their own new movement for the 21st century with the same dynamic looks as the case. 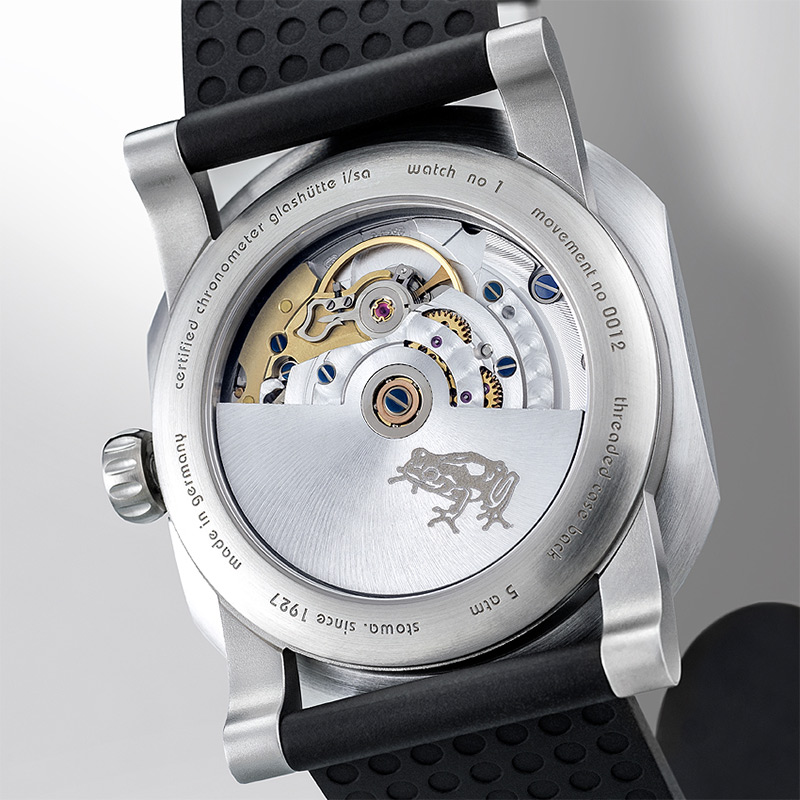